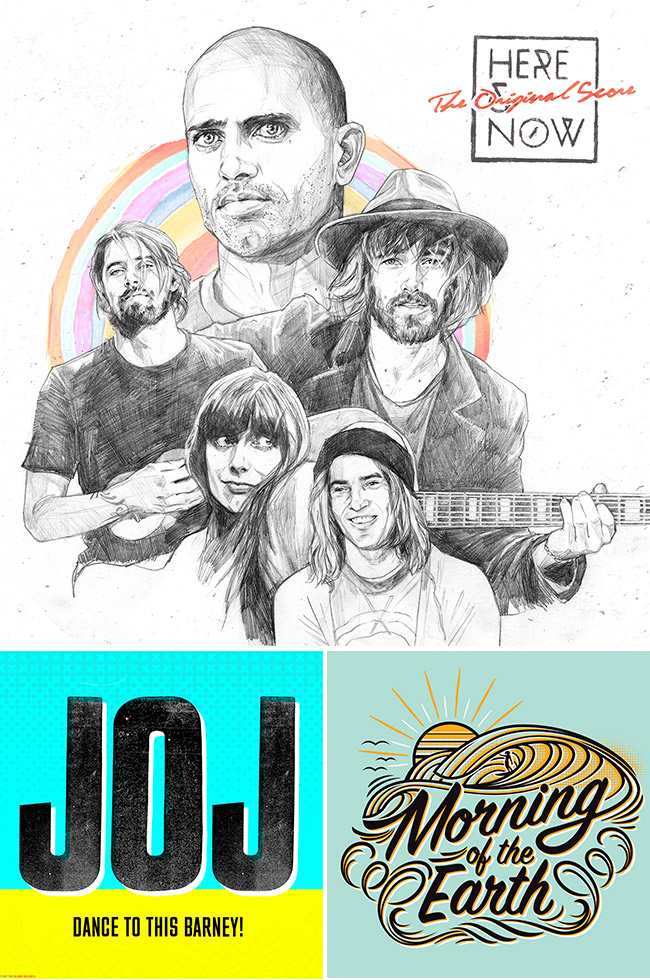 A celebration of cinema, surf and sounds in aid of The Wave Project

The annual London Surf / Film Festival charity gallery show has gained a reputation as one of the most exciting showcases of ‘surf art’ and for those in the know it has become the place to scoop a one-off piece of work for your wall.

For 2015 the LS/FF presented by REEF has raised the bar yet again. Partnering with Powerful Water Company and the UK’s most exciting surf creatives the specially commissioned ‘8 Track Gallery’ show celebrates the connection of celluloid and sound in aid of The Wave Project.

“Music informs our viewing experience, colours our emotional response and heightens the senses,” says Festival Director Chris Nelson. “A well considered score can help reveal the true cinematic story, iconic moments in surf history have been created with a coming together of sound and vision – consider the way Pink Floyd’s ethereal, otherworldly ‘Echoes’ encapsulated George Greenough’s groundbreaking barrel footage in Crystal Voyager, transporting the viewer into that alien realm for the first time on the big screen.” 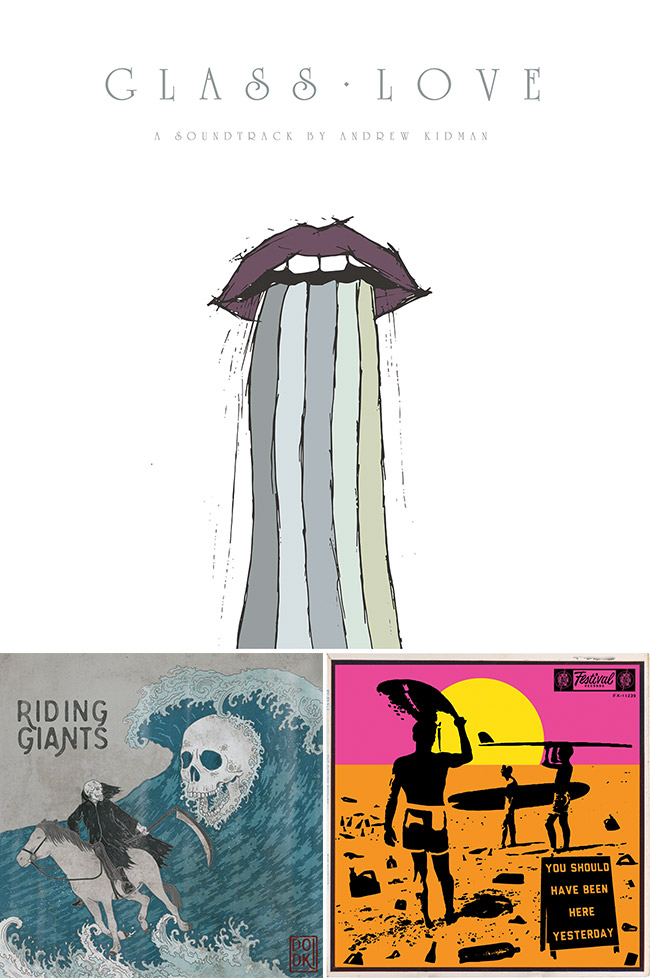 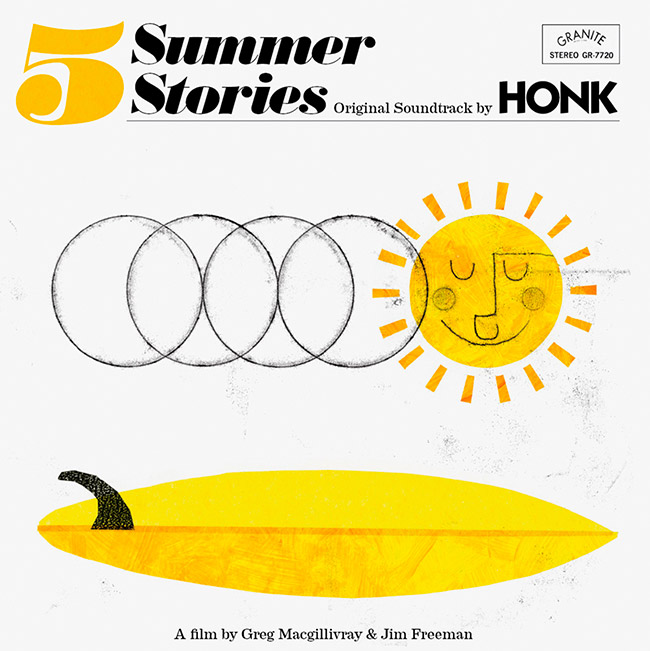 “We invited leading artists: Nick Radford, Jez Goffin, Rich Braham, Will Beeslaar, Victoria Jones, Andy Rootz Mold and Ben Cook to produce or reinterpret to produce or reinterpret the album artwork for an iconic surf movie that resonated with them,” says Creative Director Demi Taylor. “Taking inspiration from era defining features like Morning of the Earth and modern classics like Riding Giants the resulting 8 Track Gallery presented by POW is a stunning body of work. Ranging from classic pencil portraiture through to graphic illustration the collection really stirs the senses.”

The series of one-off A2 prints previewed during the 5th Annual London Surf / Film Festival. Each unique piece is now available to own at londonsurffilmfestival.com/8-track-gallery with the buy it now price of £120 plus P&P with all proceeds going to THE WAVE PROJECT. Through their award-winning surf courses, registered charity The WAVE PROJECT helps young people facing exceptional challenges.

The uplifting art of Tom Veiga….

We first became aware of Tom’s work this spring. We liked the colour and composition very much so we though we better catch up with the Brazilian artist and his inspiring work…

My name is…
Tom Veiga. I’m 34 years old, married and have two small children and I live in Garopaba on the southern coast of Brazil.

My passion for waves came…
In 2005. I worked as an art director at a design agency and lived away from the beach, but I always lived with my head in the waves. I began to create wave art in my spare time as a hobby. Just for fun at first but it grew, and I kept developing until I managed to create a style to interpret my waves. I increasingly devoted more and more spare time to drawing my waves until my first exhibitions began to appear and I started my first projects with surf brands. In 2012 I left the agency and went to live art.

I got into wave art because…
God made the sea perfectly, the flat sea is beautiful, the sea by itself is inspiring but when I see a wave coming on the horizon it is as if the sea has smiled at me and it inspires me to reflect these times.
Each wave around the world has a unique feature, big waves, small, high, low, wide, thin, hot, cold, blue, green. There are waves of all shapes. My passion is to be able to reflect most of these characteristics together in each wave with the least possible lines, using only curves and colours. My job is to interpret through my minimalism the characteristics of each wave around the world. That it is my challenge.

If you want to see more of my work…
I have already sent my art to more than 40 countries. It is a great joy because I did not think that my work would get in so many different countries and many places don’t have waves, so my art also brings a bit of the ocean to the homes of passionate surfers.

I have done exhibitions in Brazil where I live as well as Argentina, France, Spain, USA and Japan. And had the opportunity to do some projects with brands like Billabong Europe, Reef and Globe in California and Brazil as well as Havaianas and Mormaii.

I have also done many projects in conjunction with Surfrider and Save the Waves, because I believe that we have the mission as artists to support projects that have a greater purpose than the commercial, like the preservation of our oceans and beaches.

A BUS, A ROAD MAP & A SELECTION OF PRO’S… A SURF TOUR IS ON THE AGENDA

Coastal cruising, coaching and beach cleans are three key activities O’Neill has on its ‘to do’ list this year. Rumour has it that the Californian lifestyle brand has something big up its wetsuit sleeve this season in the form of an all singing, all dancing tour bus and a hunger to hit some of Europe’s top surfing spots. If you’ve ever spent hours daydreaming about road tripping in style then quite possibly the original wetsuit brand is making it a reality.

Tying in with the launch of the brands new SS14 campaign (launching April), the O’Neill Expression Sessions Tour aims to create a unique brand experience that not only covers one but all the crucial surf locations in the Southwest of France & the UK. Taking place over five months, the tour is scheduled to visit a host of different locations offering a variety of services from pro coaching and product testing through to music and art installations.

The main hub of the Expression Sessions Tour will be a stylishly decked out bus that has been branded good enough to live in. Using both upcycled and recycled products, the bus’s ‘face lift’ sounds as though it’s going to be an ethical one with reclaimed wood flooring and hand crafted tables on the cards.

Rumor has it that Firewire Surfboards and iON Camera’s will be joining the brand onboard offering demos and product trials. What more is there to want?!

Set to be on the road mid-April, the unique Expression Sessions Tour Bus and its good old road map sounds as though it’s going to make stir this summer. Keep your ear to the ground for further information…