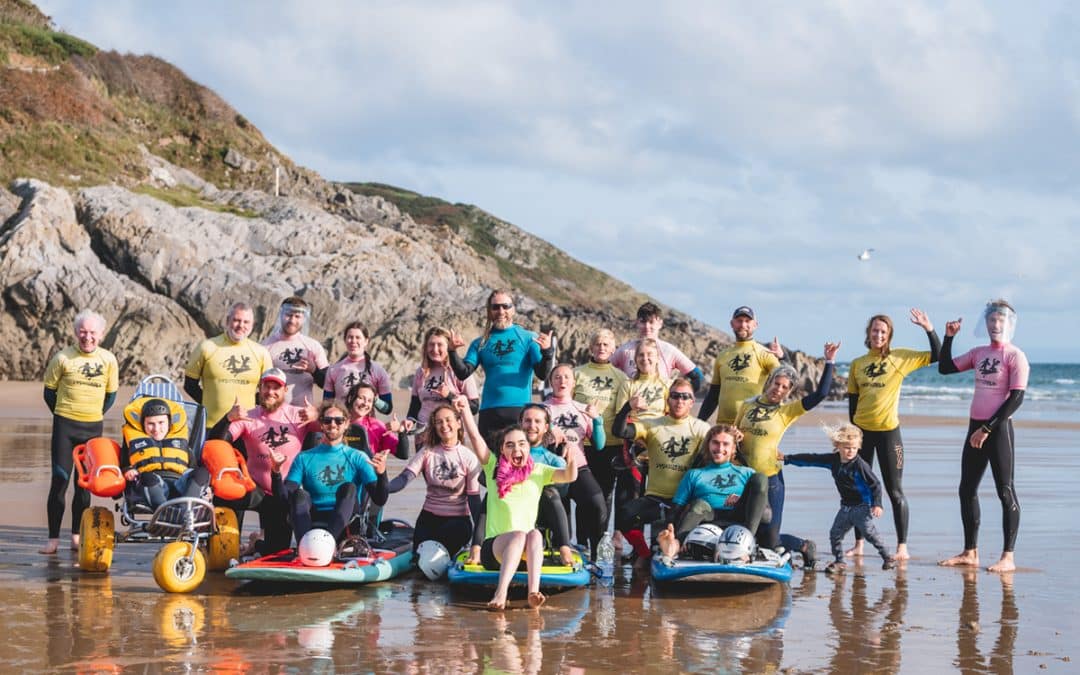 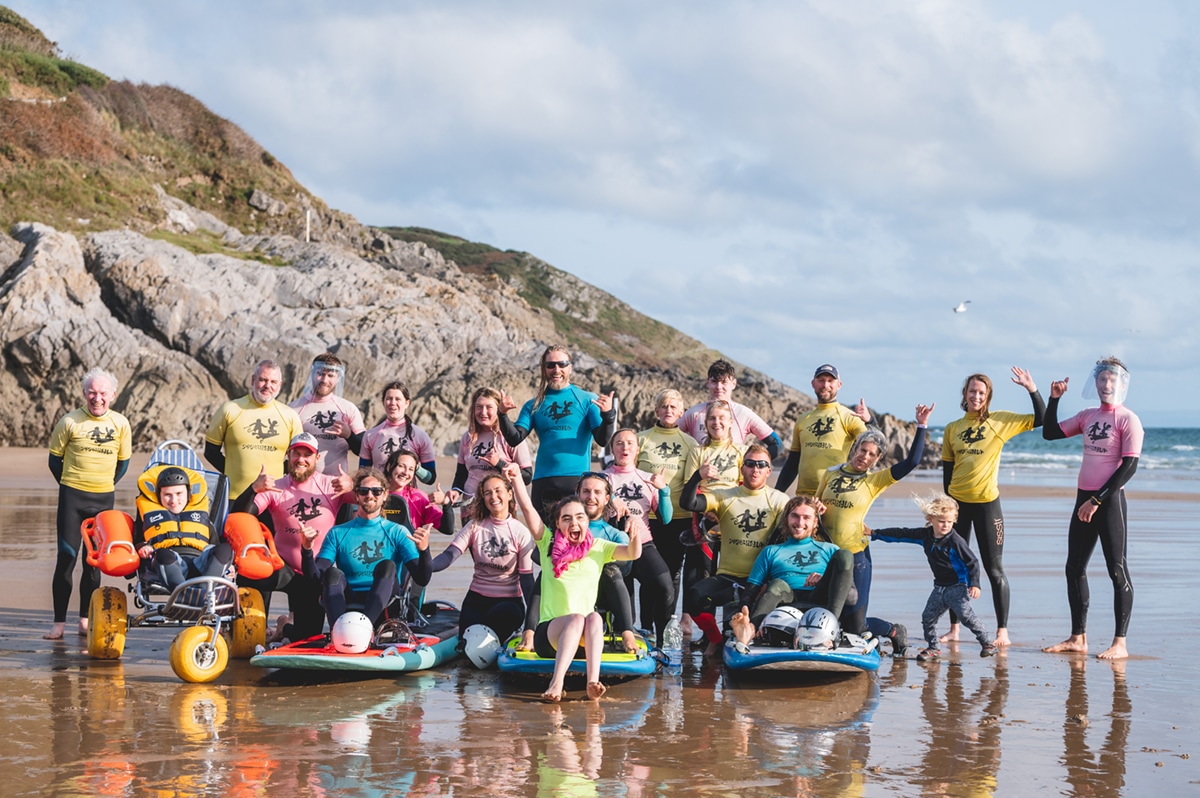 An adaptive surf school in Swansea is the proud owner of the UK’s first purpose-built, inclusive surf facility, following a visit from the BBC’s DIY SOS team and Children in Need.

Surfability UK supports more than 500 surfers from all over the Britain, helping them to overcome physical impairments to experience the thrill and freedom of riding the waves.

The community interest company had been operating out of a dilapidated bus stop with no electricity, running water or ventilation.
Now, thanks to hundreds of local volunteers, the surf school has a state-of-the-art, eco-friendly headquarters. The new build gives clients a safe, dry space to change in privacy for surf sessions, while the bus stop – now fully renovated – provides secure surfboard storage.
Swansea-based Huw Griffiths Architects designed a building that draws inspiration from its surroundings. Surfboard-shaped and in tones of blue, sand and driftwood, the facility sits naturally in the picturesque environment of Caswell bay on Wales’s Gower peninsula. Power is provided by solar panels, while the flat grassed roof features locally-sourced plants.

“It’s been raining so hard this week. Usually we would come down an hour early to bail out the building before we start our day. We used to put bricks down to use as stepping stones through the water. It was cramped, dark and full of spiders.

“Now we have wet and dry storage so all the gear can stay in top condition. It’s so much easier already, and all our participants love the changing rooms. It’s incredible to have different rooms for different equipment.

“Light switches, windows, desks and counters are all at wheelchair height, the doorways are wider. Everything has been done to accommodate our surfers.”

“As far as we’re aware, it’s the first purpose-built facility of its kind anywhere in the world. It’s an extraordinarily beautiful building – something that Swansea, south Wales and indeed the UK can be very proud of,” Mr Knowles said. 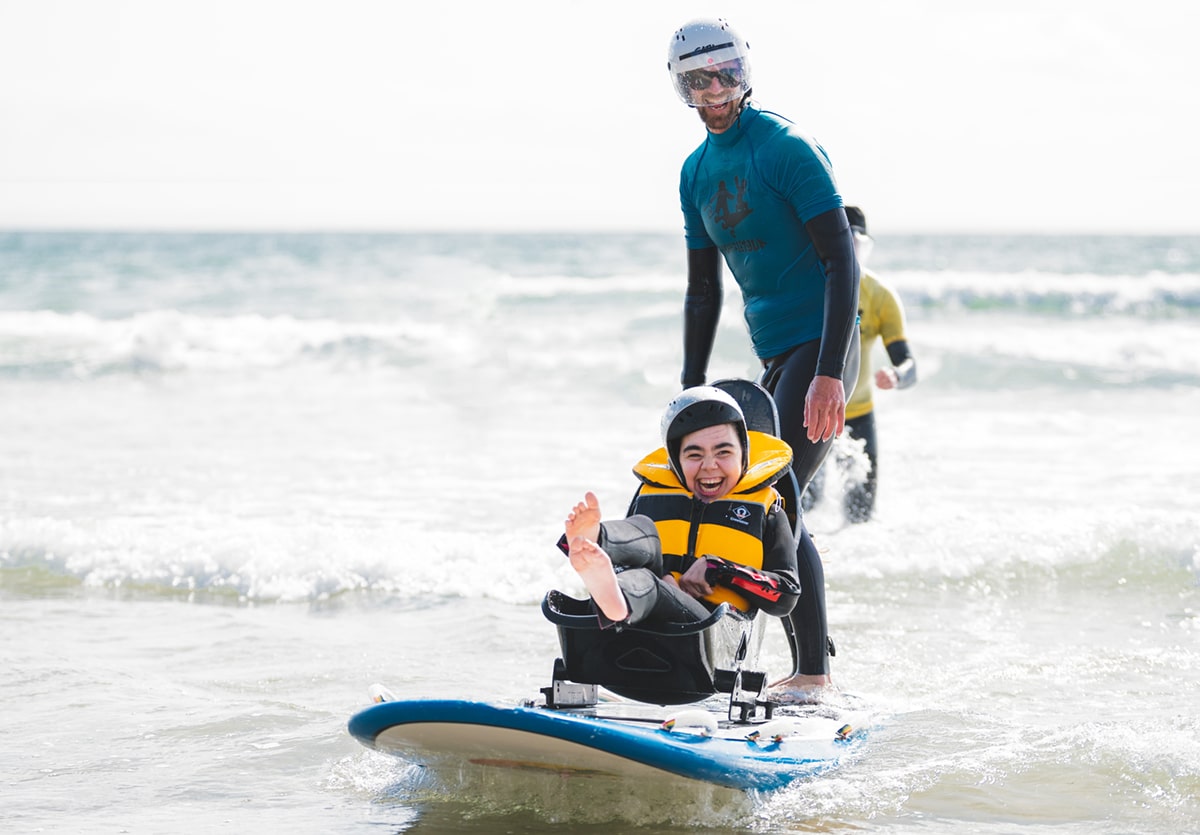 As adaptive surfing evolves and improves accessibility at grassroots level, its growth plays out on the elite stage: this year’s edition of the AmpSurf ISA World Para Surfing Championships broke participation records as 140 athletes from 24 national teams competed at La Jolla, California.

“We’re really close to ticking all the boxes for adaptive surfing to become a Paralympic sport – that’s the next step,” Ben says, as surfing prepares to make its Olympic debut at the postponed Tokyo Olympic Games, now set to take place in the summer of 2021, according to the Tokyo2020 website.

Thanks to the pioneering work of Ben and his team, the future of this sector looks overwhelmingly positive, with countless individuals across the UK and the world set to defy their disabilities and share the stoke of riding waves. But for now, the miracles keep happening down at Caswell bay.

“I’ve got a student who is visually impaired and able to paddle the board, get to his feet and ride waves unassisted. I’ve coached a 50-year-old guy who has one leg and a 13-year-old boy with cerebral palsy,” Ben says.

“They want to surf every Saturday come rain or shine. It’s an honour to be able to help them. People see that on the beach and they’re blown away.

“We have quadriplegics and people with cognitive disabilities. They can’t swim but they want to surf every week. They don’t see barriers, so why should there be any?”

The interior of Surfability UK’s new headquarters will be unveiled on the DIY SOS Big Build Children in Need special on Thursday 12th November on BBC One.

If you would like to show your support for the vital work being done by Surfability UK, you can donate to BBC Children in Need at bbcchildreninneed.co.uk. 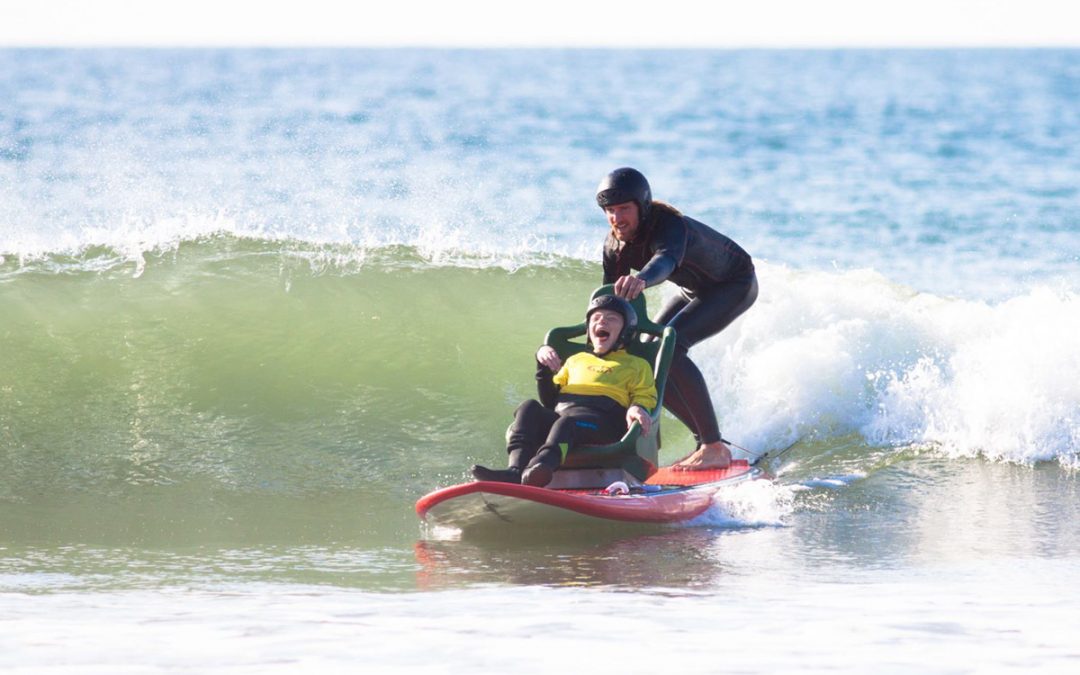 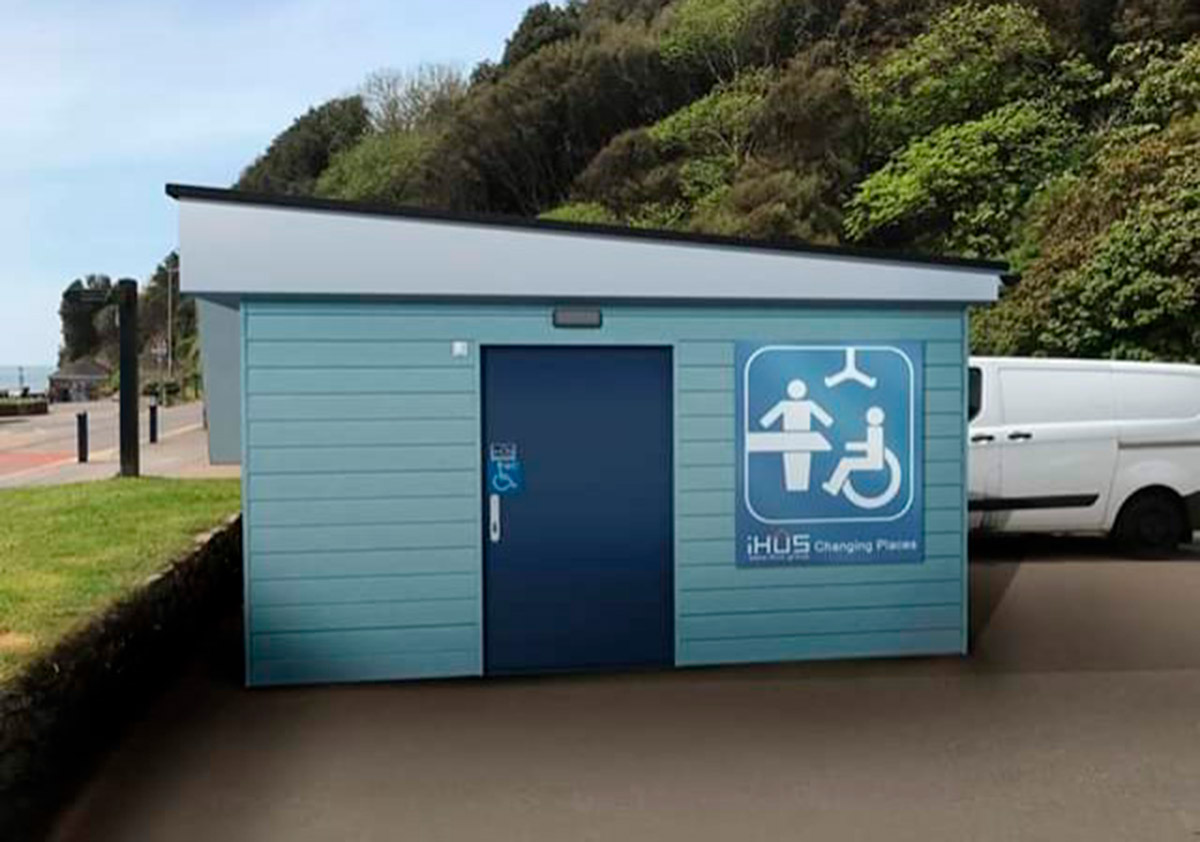 Caswell Bay, Wales is not only the proud home of Surfability UK CIC, the UK’s first fully inclusive and adaptive surf school, it is soon to the first Gower beach to have a disability changing place. And the team here at Surfability UK CIC HQ could not be more delighted about this news.
The changing place will be located in close proximity to the current toilet facilities and the blue badge parking spaces.  Specialist equipment such as an electric hoist, shower, toilet and changing bed will be available to ensure that individuals with even the most severe disabilities will be able to access the beach and all it has to offer with dignity and privacy. 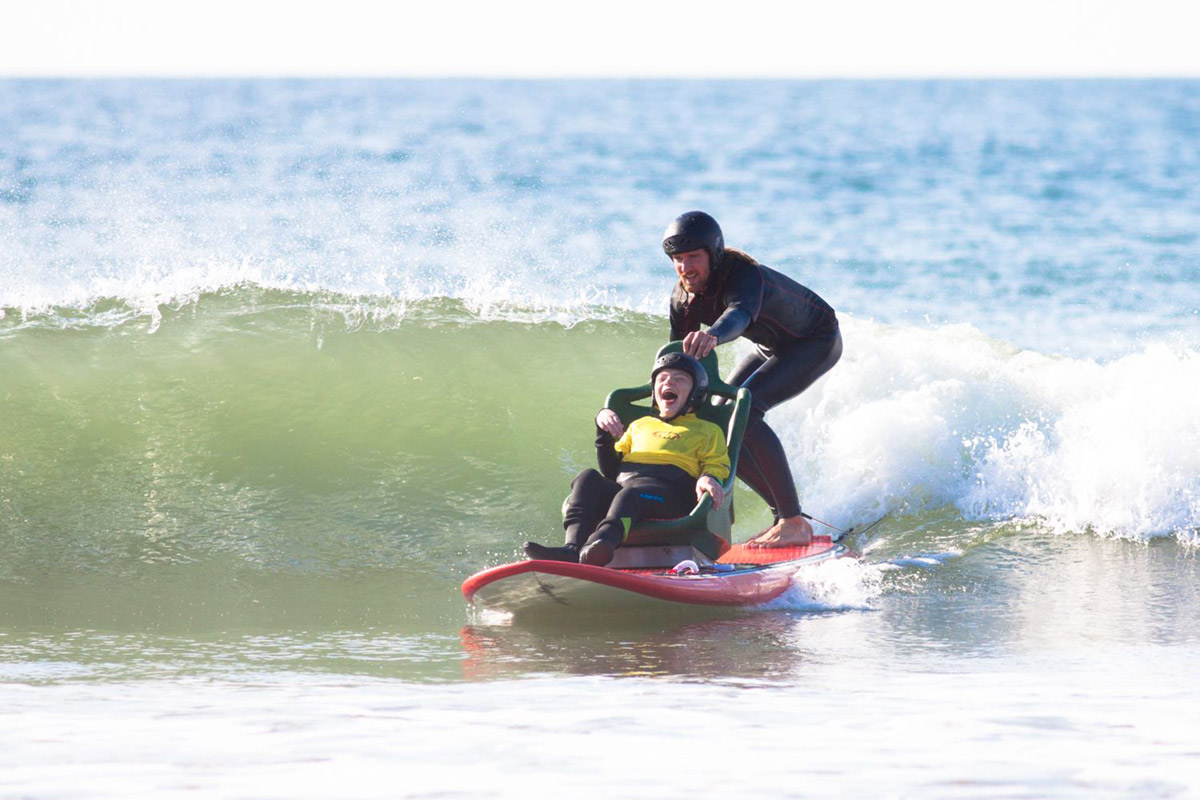 Local business woman and parent, Suzanne Morrison, who runs the award winning Bramwood Accessible Holiday Home on Gower has been a driving force behind this project. Suzanne has a son with quadriplegic spastic cerebral palsy and has said: “John requires 24/7 care, we therefore know what it takes to book a holiday without equipment and care. He is the inspiration behind this project.
“It is wonderful news for all the disabled people who need these facilities. We are so privileged to have the people with the expertise to give my son and others a wonderful experience. I am passionate about Gower and Swansea and about promoting what we have here and I am grateful to everyone from Swansea Council for their support through this process.”

With support from the Welsh Government’s Tourism Amenity Investment Scheme (TAIS), construction is expected in 2019. The Swansea Council expect that the changing facility will offer increased choice to around 250,000 disabled visitors looking for holiday destinations in the UK (read more here).
Feeling ready to catch your first wave or relive the stoke of your last? Surfability UK CIC surf all year round with disabled surfers of every skill level. There’s never been a better time to get in touch!