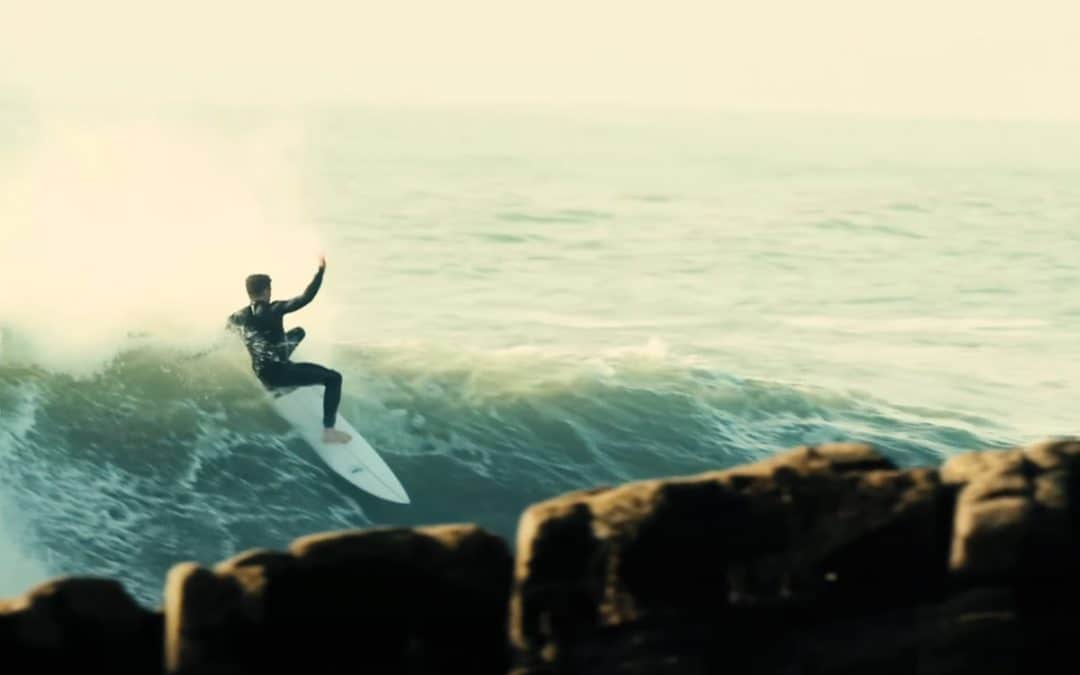 Spectacular coastline, picturesque harbours, dramatic seascapes and pumping waves. North Cornwall has it all, hit play to watch some of its finest slide through aqua playgrounds. 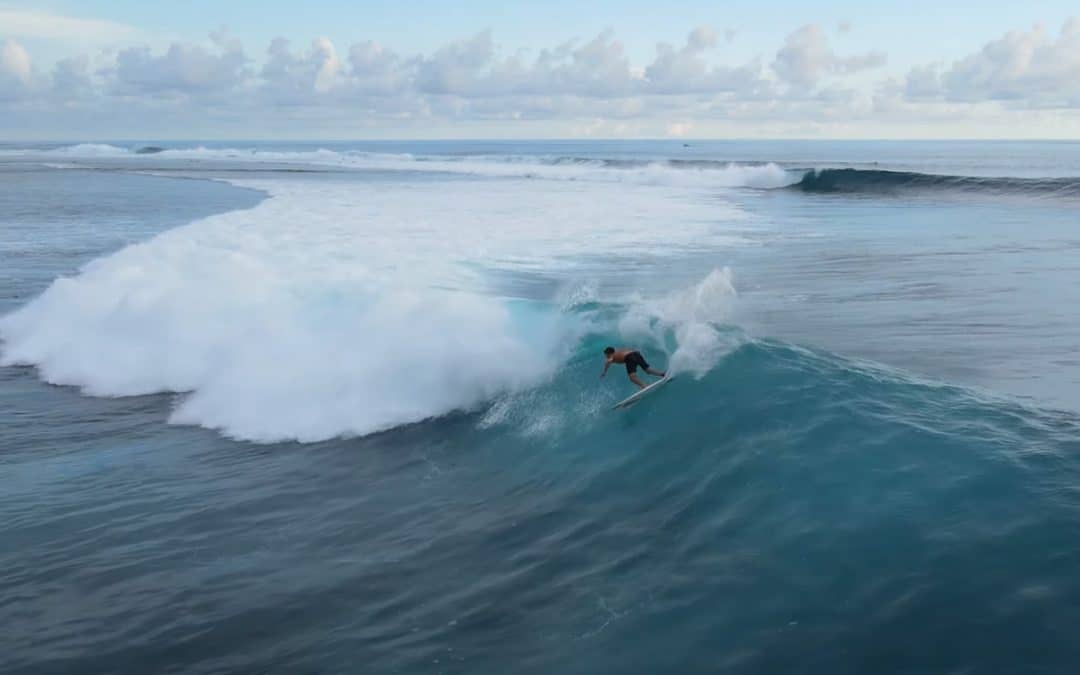 This long left point in remote Indonesia works best on small to medium swells, and can max out pretty easily during the dry season. This edit was filmed over a few days in June during a window of large swell, with some of the competitors of the Krui Pro contest taking it on. 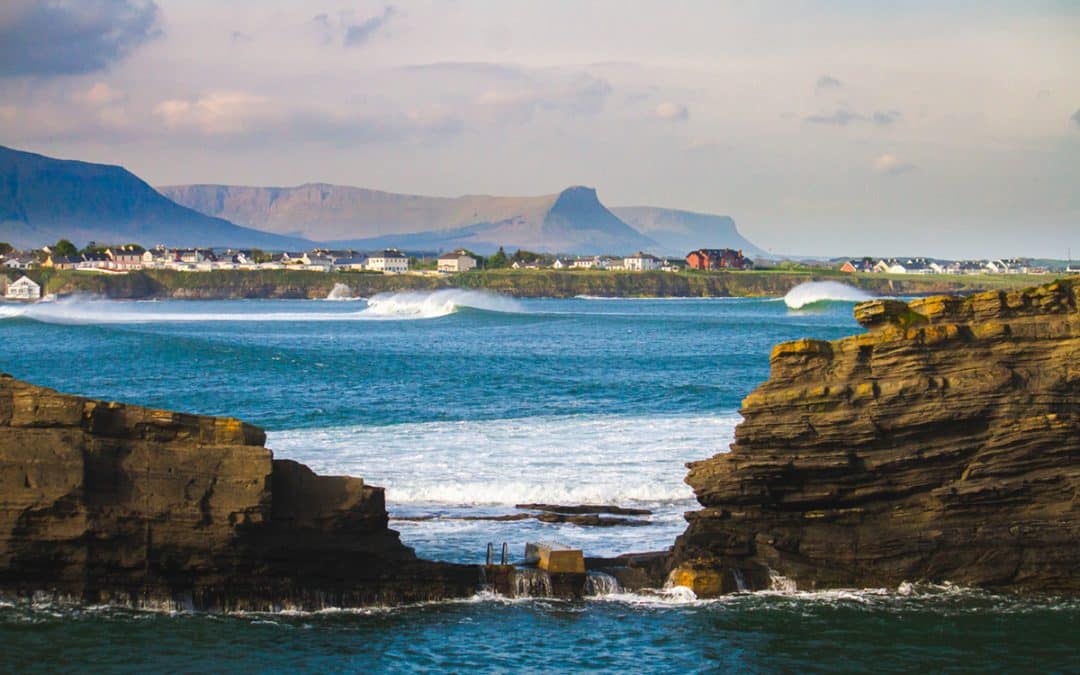 “My Dad always says that the west coast of Ireland chooses its people.” (Rory O’Dowd).

This is our attempt to explore the ways in which the surfers of the west coast of Ireland live and experience the ocean. We have collected stories from first-hand interviews as well as surf photography, film work and art.

Based on PhD research by Dr. Frederique Carey, we offer a little insight into the Irish surfing culture and its “surflore”. We show how Irish surfers’ expressive body of culture intertwines personal passions with environmental and social dimensions, and how it draws from Ireland’s ancient bardic traditions, popular culture and poetry… where legends and myths are always but a few words away. 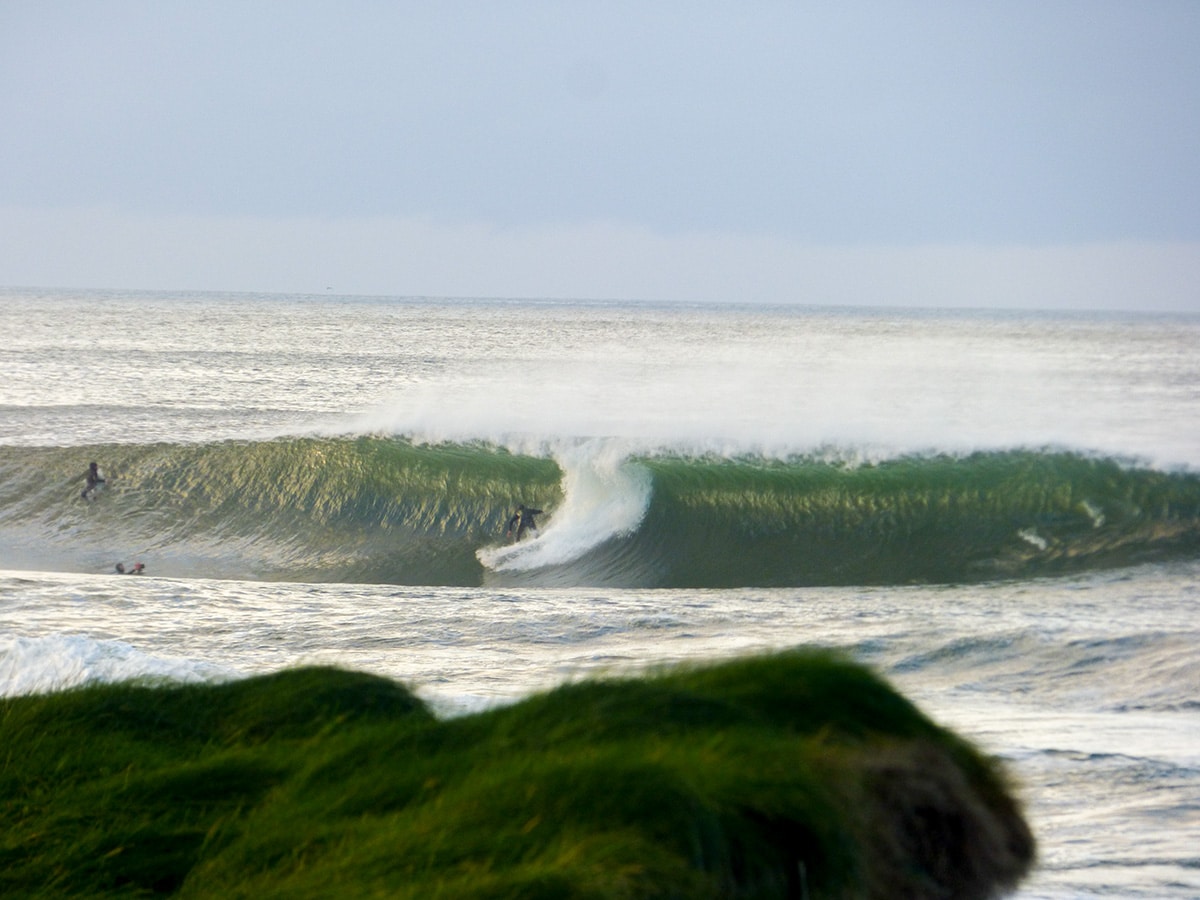 A huge thank you to Rory O’Dowed, John & Neil Byrne, Ollie O’Flaherty, Joe McGowan, Aaron Reid, Owen Murphy, Adam Cross, Josh McRea, for taking part in this short taster of whats to come … along with many more whom we interviewed for their contributions to both the completed and now published research!

We are now aiming to turn this into a full-fledged documentary series sharing their stories!

After navigating troubled waters with a global pandemic and a young family to rear, this has been a long time coming but it is now ready to be shared and we look forward to your reviews! 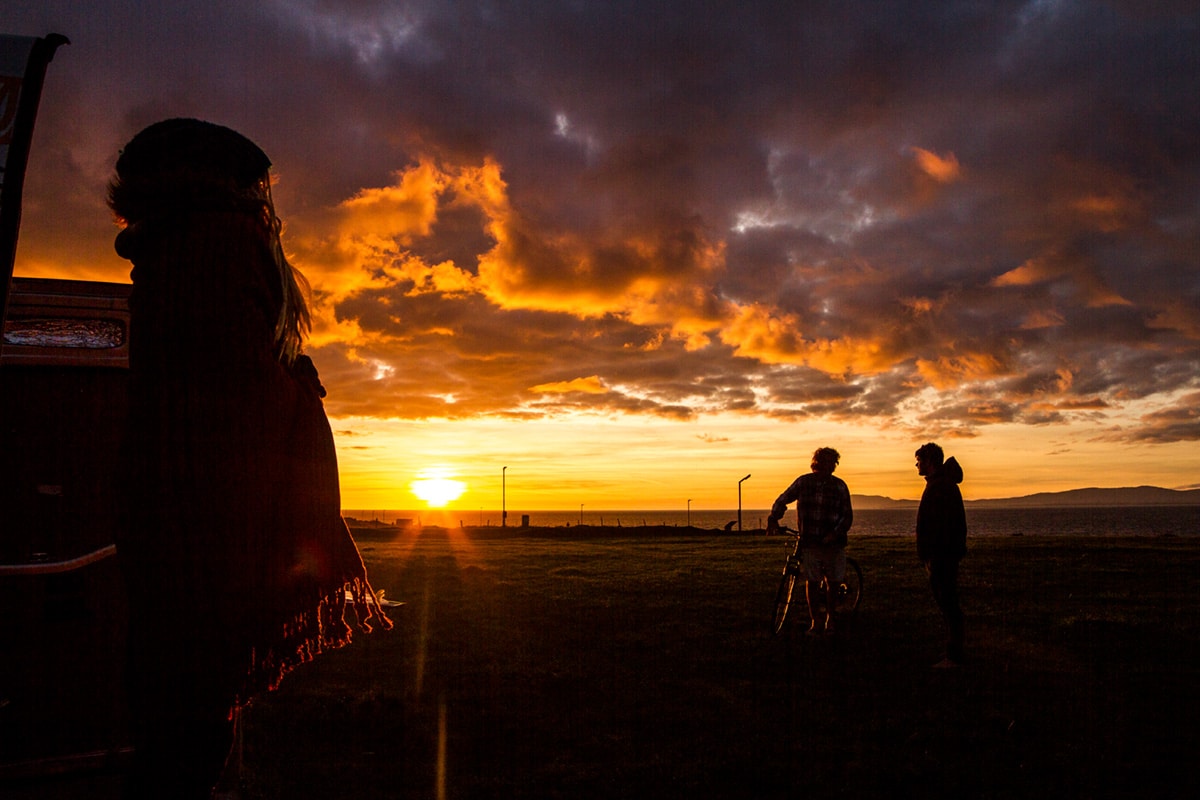 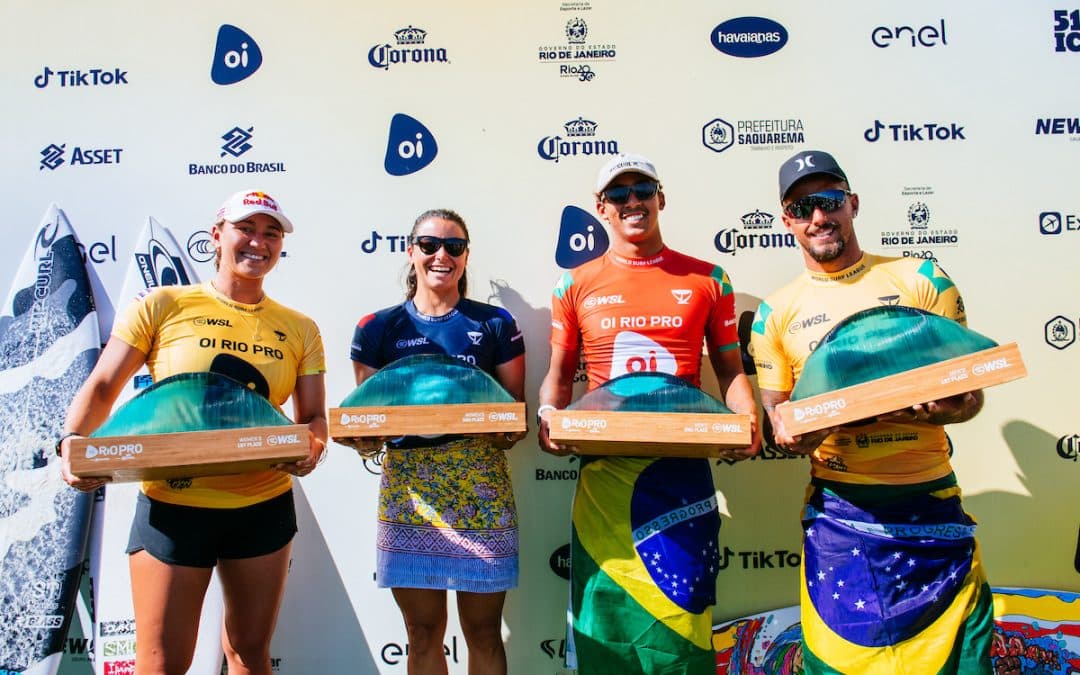 Carissa Moore (HAW) and Filipe Toledo (BRA) won the Oi Rio Pro Presented by Corona, Stop No. 8 on the World Surf League (WSL) 2022 Championship Tour (CT). The competition finished off in spectacular fashion in front of a huge crowd at Praia de Itaúna in Saquarema, Brazil. Five-time WSL Champion Moore defeated Johanne Defay (FRA) in the Finals, while Toldo took out rookie Samuel Pupo (BRA), to earn his third-straight event win in Saquarema and his fourth overall at the Oi Rio Pro. 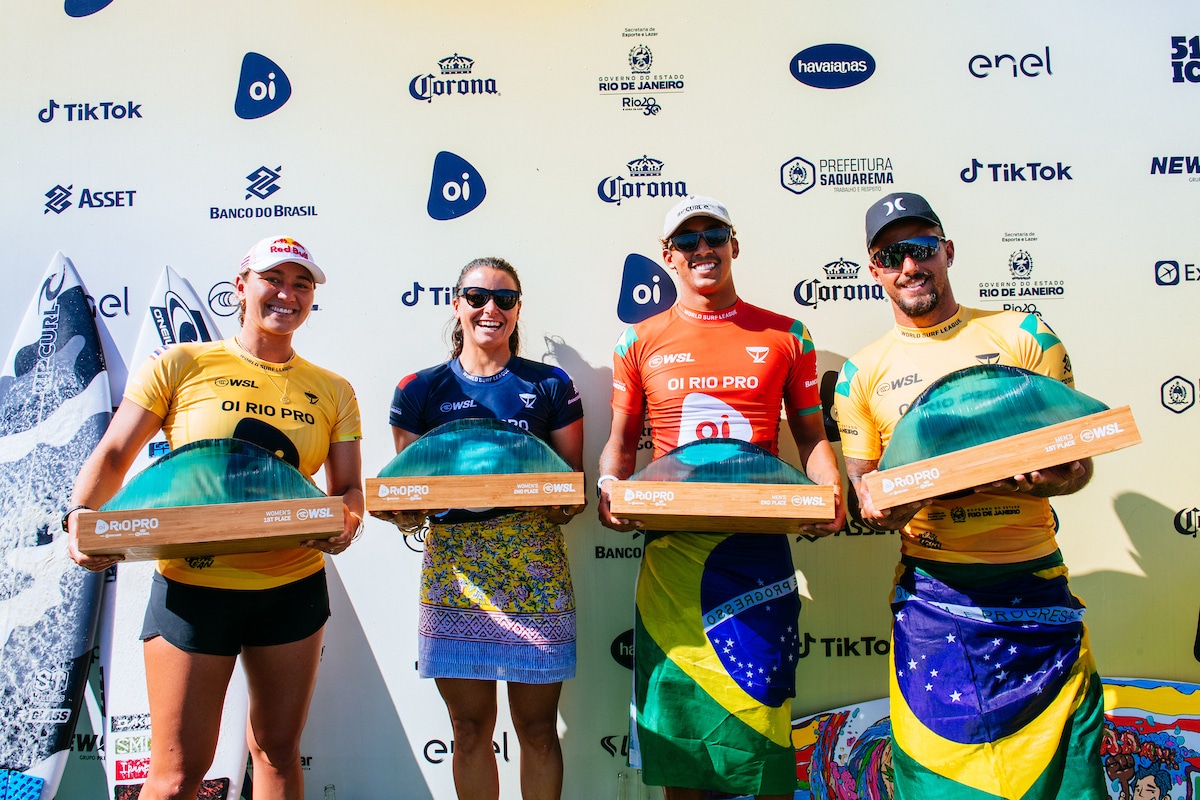 Carissa Moore Wins Oi Rio Pro, Clinches a Spot in the WSL Final 5
Current World No. 1 Moore has been consistent throughout the 2022 CT season with three 2nd place finishes in addition to her 1st place result in Saquarema. Today’s win marks the 25th CT victory of her career and she now has her sights set on another possible World Title at the Rip Curl WSL Finals at Lower Trestles from September 8-16, 2022.

In the Final, Defay got off to a strong start, earning a 7.50 (out of a possible 10) on solid backhand surfing on the predominantly lefthand waves in the 4-6 foot range at Praia de Itaúna. She followed with a 4.83 for a 12.33 total (out of a possible 20). Moore, on the other hand, had two mid-range scores of a 5.50 and a 5.93 with the clock ticking down. But on the last wave of the heat, Moore blasted consecutive backside hacks with speed and progression to earn a 9.50, the highest score of the event in the women’s division. 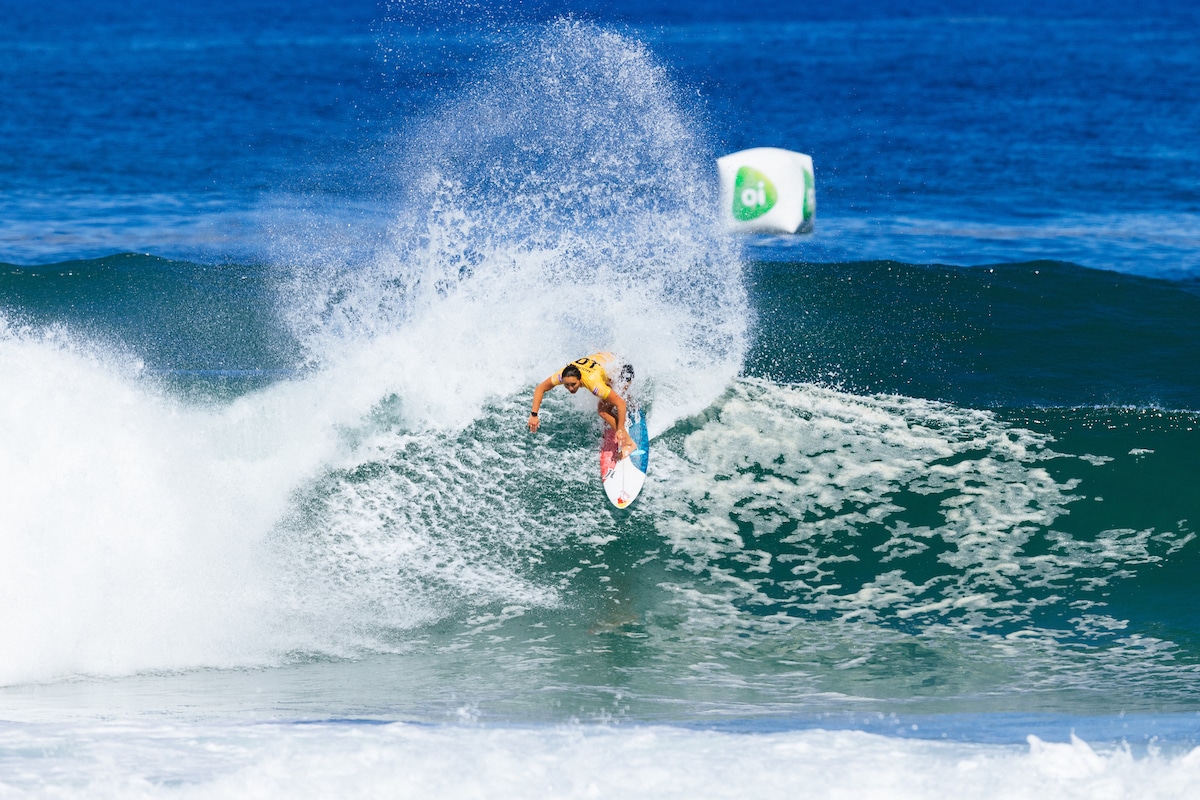 “This is one of my favourite wins in my whole career,” said Moore. “Coming up against my good friend Johanne Defay is always difficult. She got me in G-Land and I really feel like she’s the one to beat this year. I was behind in the whole heat and I thought that I was probably going to get another 2nd place here, but things went my way. I’ve just had such an incredible week at a house with all my friends, the crowds have been amazing, and I’ve felt a lot of love and support here, so I think that’s what made it even more special.”

In addition to her victory, Moore was able to clinch a spot in the WSL Final 5, extending her lead in the rankings over Defay, Lakey Peterson (USA), Stephanie Gilmore (AUS) and Brisa Hennessy (CRI). 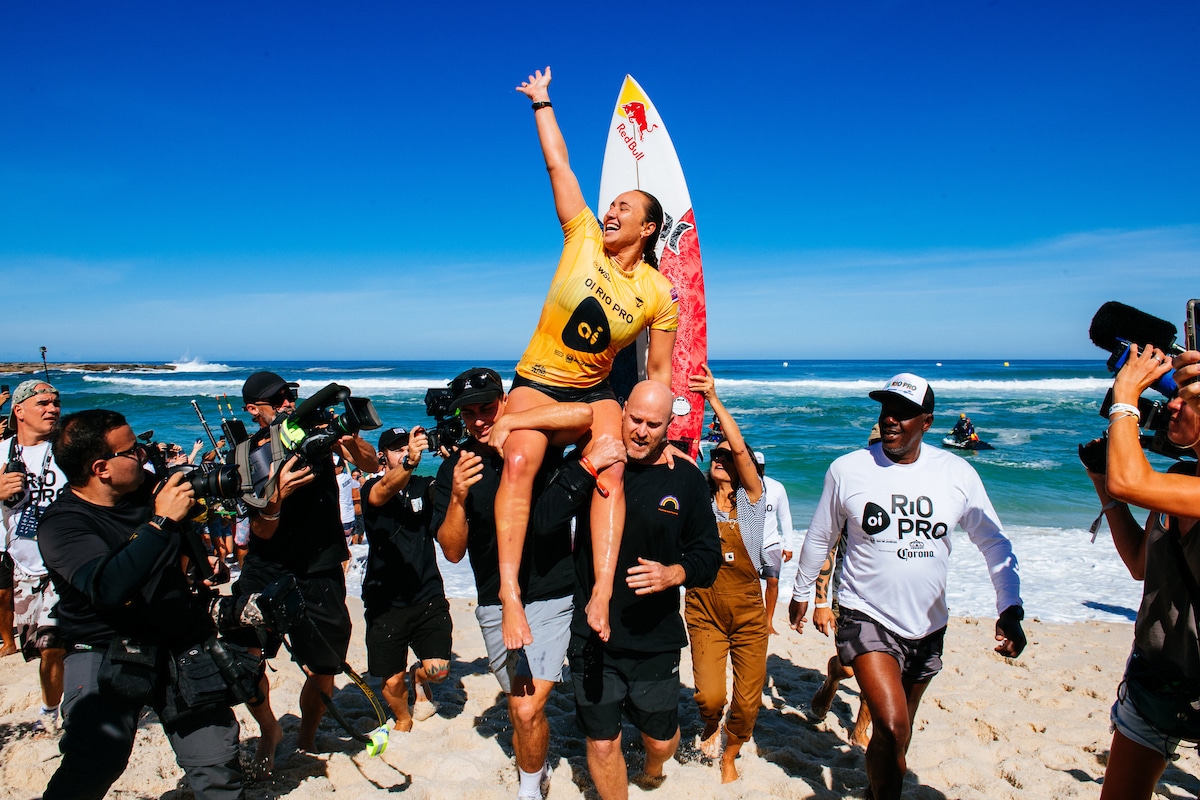 As was the case with the majority of the athletes competing at the 2022 Oi Rio Pro presented by Corona, there was an exhilarating feeling at the event brought by the energy and stoke provided by the most passionate and avid surf fans in the world.

“It’s great to make it to the Finals. But it’s the fans that make it so special,” said Defay from the Award Ceremony. 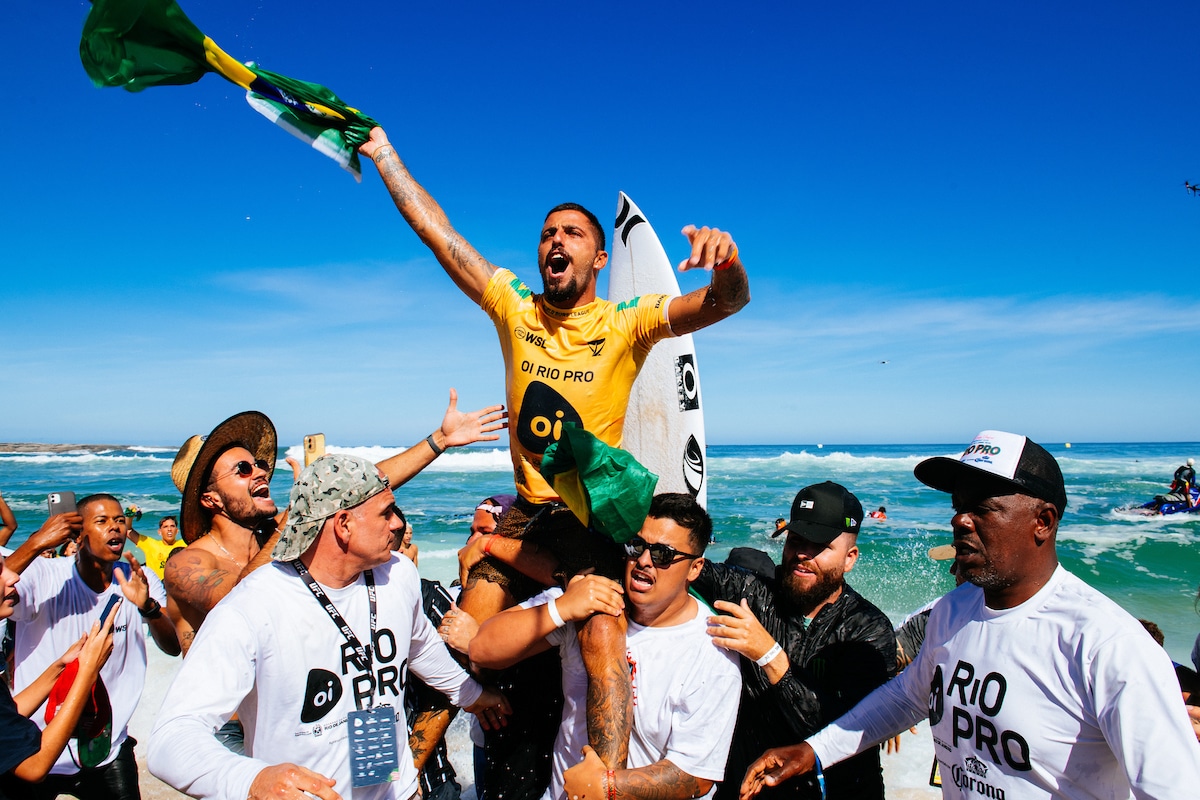 Toledo Earns Third-Straight Victory in Saquarema
Toledo is now being referred to as the “King of Saquarema” after winning his third-consecutive event in Saquarema and four total victories at the Oi Rio Pro. After two throwaway scores, Toledo boosted the biggest backside air rotation of the event for a perfect 10-point ride. Toledo also caught one of the longest barrels of the event and added a quick air-reverse on the closeout section for an 8.67. Toledo was unstoppable in the Finals and his torrid pace resulted in an 18.67 total, the highest of the event. 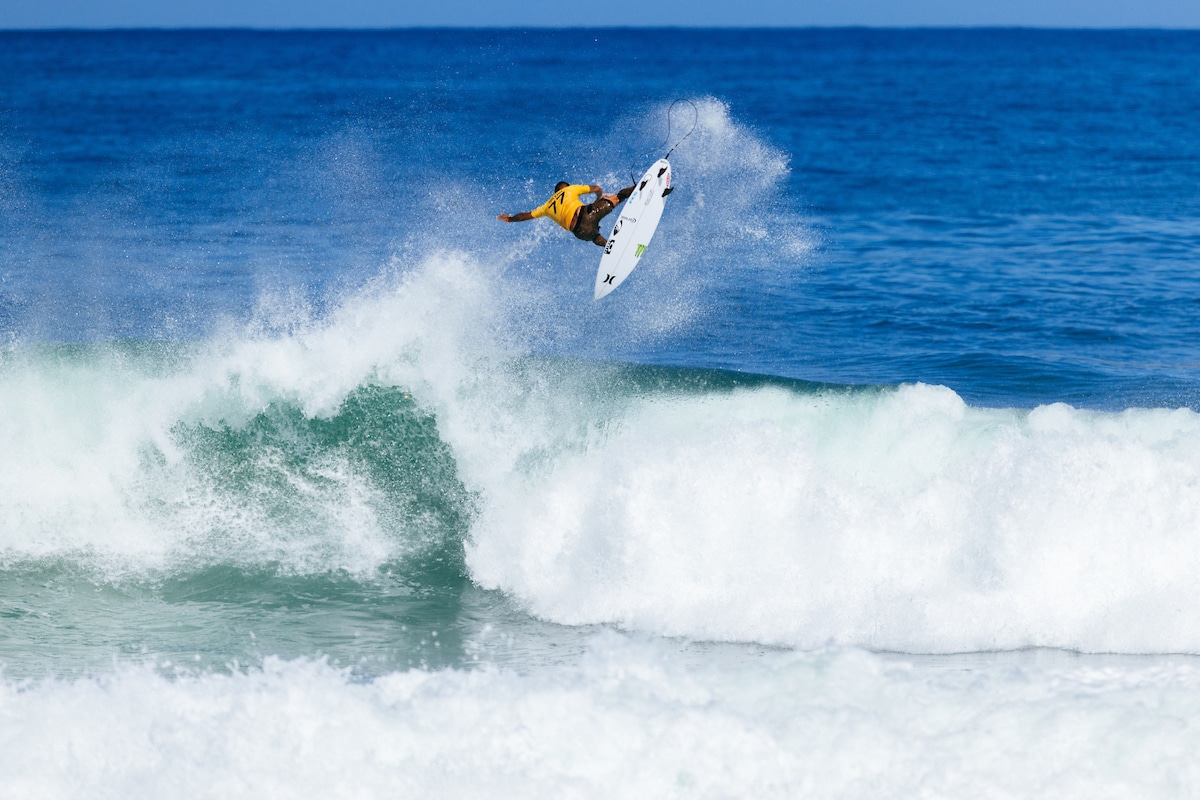 “I feel completely blessed for being in this position and sharing this moment with my family, friends and this amazing crowd,” said Toledo. “I want to congratulate Samuel (Pupo), Yago (Dora) and Italo (Ferreira) who all made it to the Semifinals. It was a historic moment for us Brazilian athletes and the crowd was a class act, showed love to everyone on Tour and made this one of the most magical events ever.”

Samuel Pupo made it to the first Final of his career on the Championship Tour against Toledo. As a rookie, the young high-flyer had spectacular performances throughout the Oi Rio Pro, taking down big names such as Caio Ibelli (BRA), Mateus Herdy (BRA), and Italo Ferreira (BRA) on his way to the Finals. 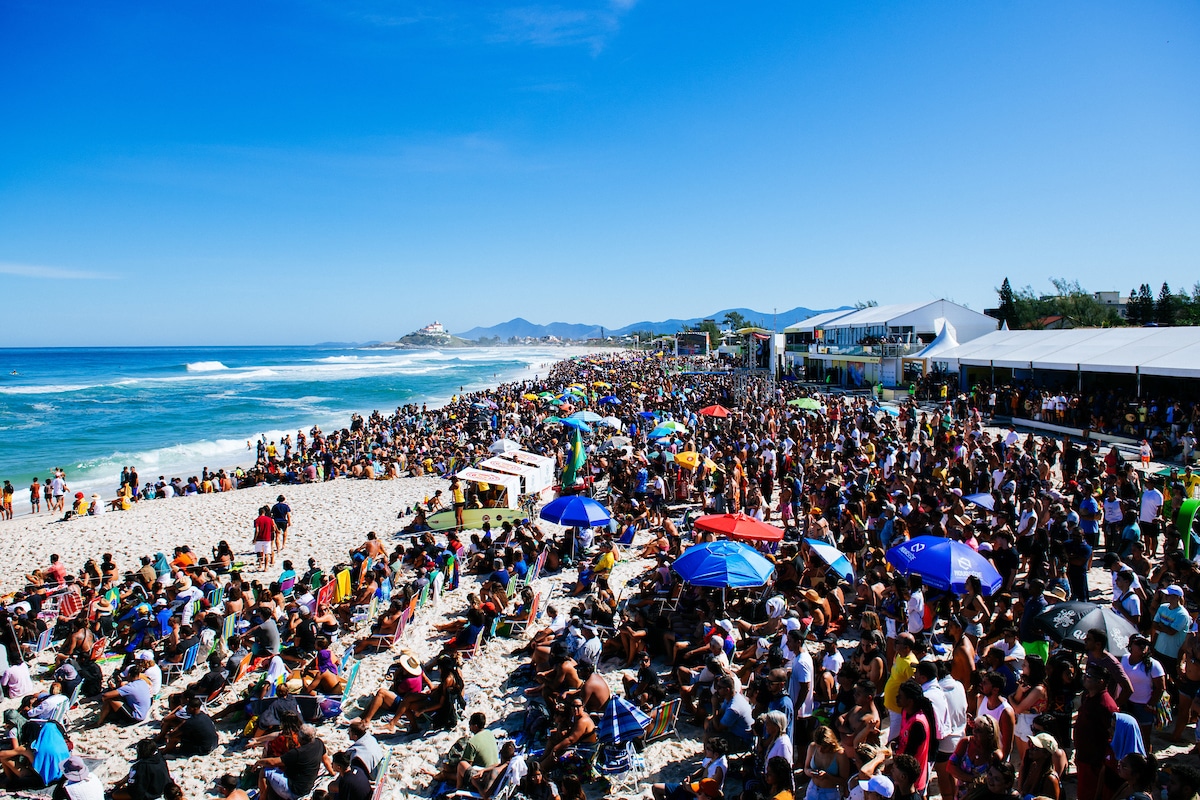 “Filipe started with a 10 on a wave that I could have blocked because I had priority. He went  left and I ended up going to the right,” said Pupo. “Afterwards, it was difficult to recover because the sea calmed down and not many waves came through, so it seemed that everything was going in his favor. But I’m really happy I made the Final. For sure, this is the best day of my life, but the year is not over and I already really want to compete again. I can’t wait to go to J-Bay and do my best there,” completed Pupo. 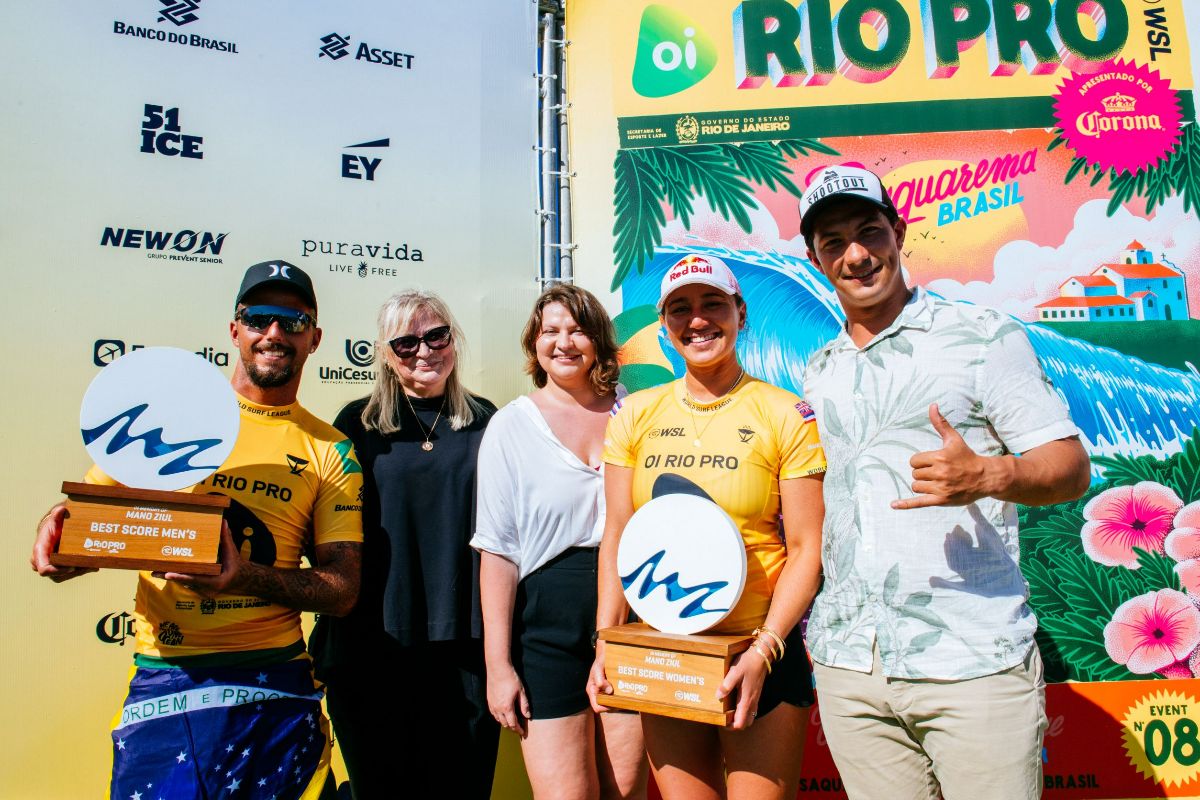 Toledo and Moore Also Win Inaugural Mano Ziul Award
In what was one of the most emotional moments of the Oi Rio Pro, the inaugural Mano Ziul Award was presented to honour a visionary and pioneer in the sport of surfing. The recently deceased Mano Ziul was able to provide the first webcasts for contests, bringing the most remote locations into the audience’s living room. His creation of the scoring system has been a fundamental part of competitive surfing ever since it was created. To honour his memory, the Mano Ziul Award was given to the men’s and women’s athletes with the highest heat total of the event at the Oi Rio Pro.

Mano Ziul’s family, represented by his wife Sandra and his children Luiza and Ziul (Ziulzinho) Andueza presented the trophies to Carissa Moore for her 15.43 total and Filipe Toledo, who earned an 18.67 total, both in the Finals.

“I want to dedicate this victory to Mano Ziul, who is up there watching us all right now. This win should be celebrated by all of us for everything he has done for the sport of surfing,” declared Toledo from the award ceremony. 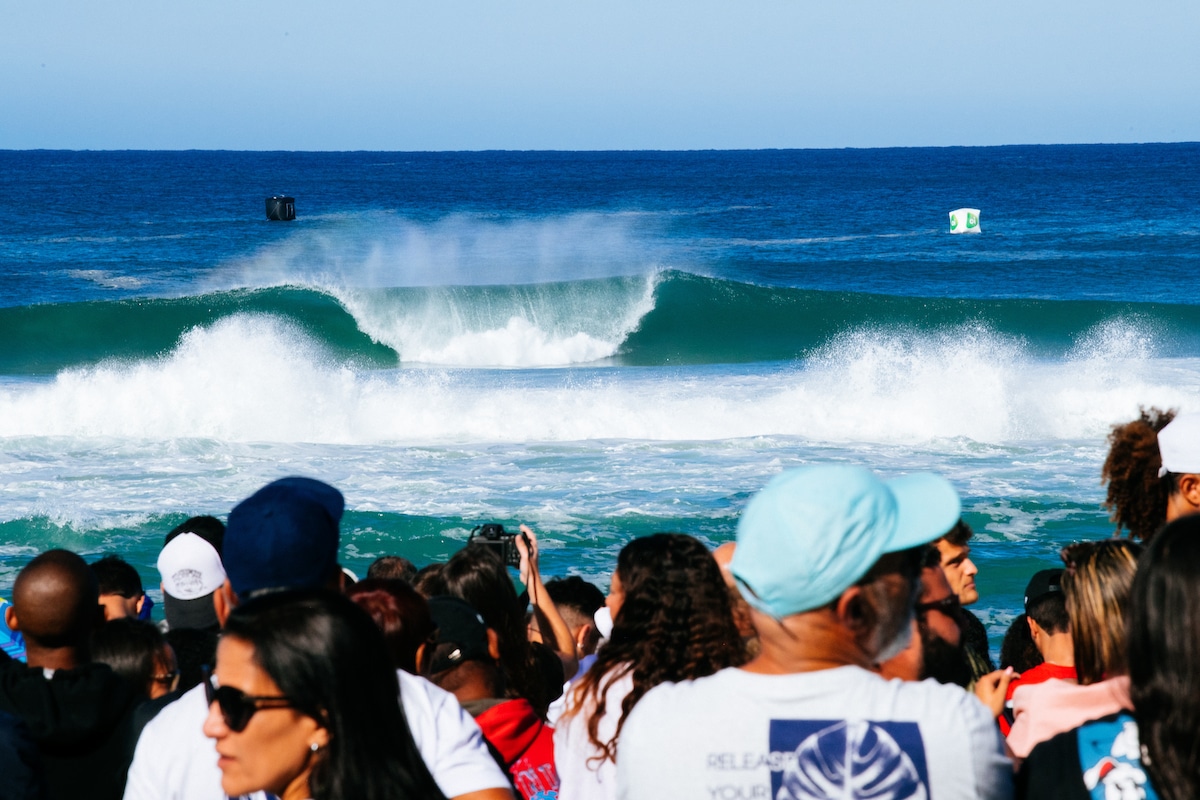 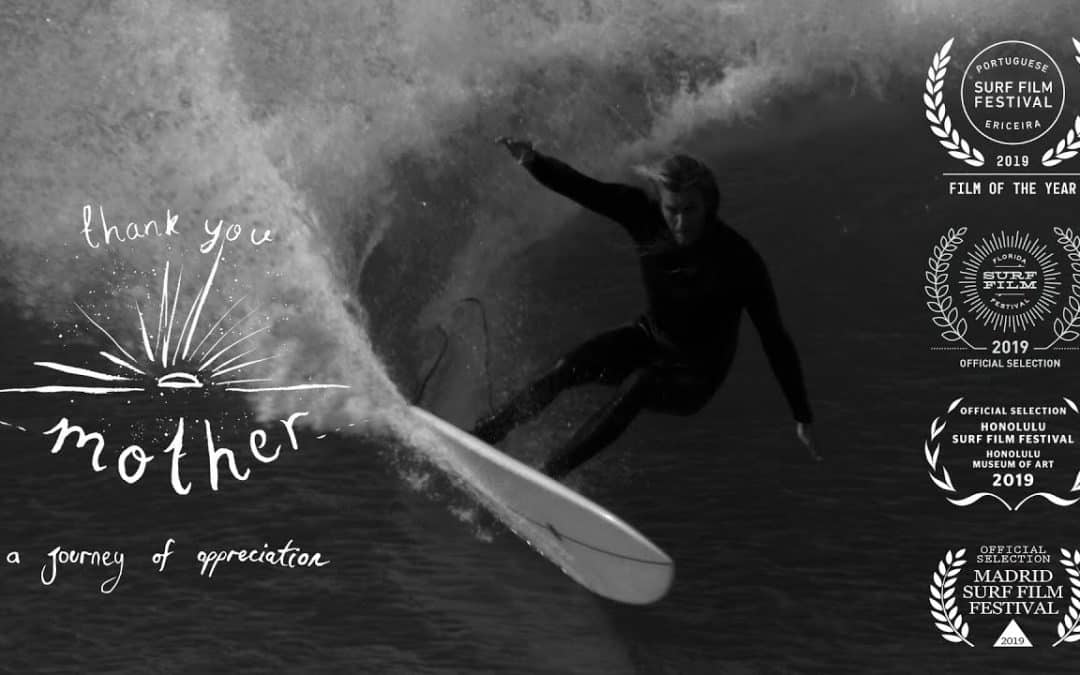 Thank You Mother is a cinematic journey of surfing, simplicity and appreciation. It is a film that isn’t afraid to be beautiful, stylish and sincere. Produced by needessentials, this film by Torren Martyn and Ishka Folkwell that features an original soundtrack by Nick Bampton and narration by award winning Australian film maker and life long simplest Albert Falzon, who made the seminal 1970 surf film ‘Morning of the Earth’.

‘Thank You Mother’ was made four years ago and up until now has only been available to a small audience. The film began as a story about the act of creating a surfboard and the art of riding one, exploring the connection between surfer Torren Martyn and his friend, mentor and surfboard shaper Simon Jones of ‘Morning of the Earth Surfboards’. This naturally led to the doorstep of another friend and mentor, Albert Falzon and the film became more about connection, creativity and friendship, about surfing, being happy, and living simply.

Shot on location in South Africa, Indonesia and Australia, Ishka Folkwell’s original and artful approach to film making captures something of the essence of these places, bringing them to life on screen. Nick Bampton’s original musical score was composed for the film, so as Torren Martyn glides with style and power, carving beautiful lines into clean walls, the music echoes the mood and rhythm of his movements perfectly. Perhaps the most powerful element of this creative collaboration between surfers, shapers, filmmakers and musicians is the truth and beauty of Albert Falzons reflections on life. With humility and charisma he offers viewers the keys to a life of contentment, explaining that happiness comes not from having more or being the best, but from having good friends and being kind. ‘Thank You Mother’ is a film that celebrates appreciation of the simple things and stays with viewers long after they have watched it. 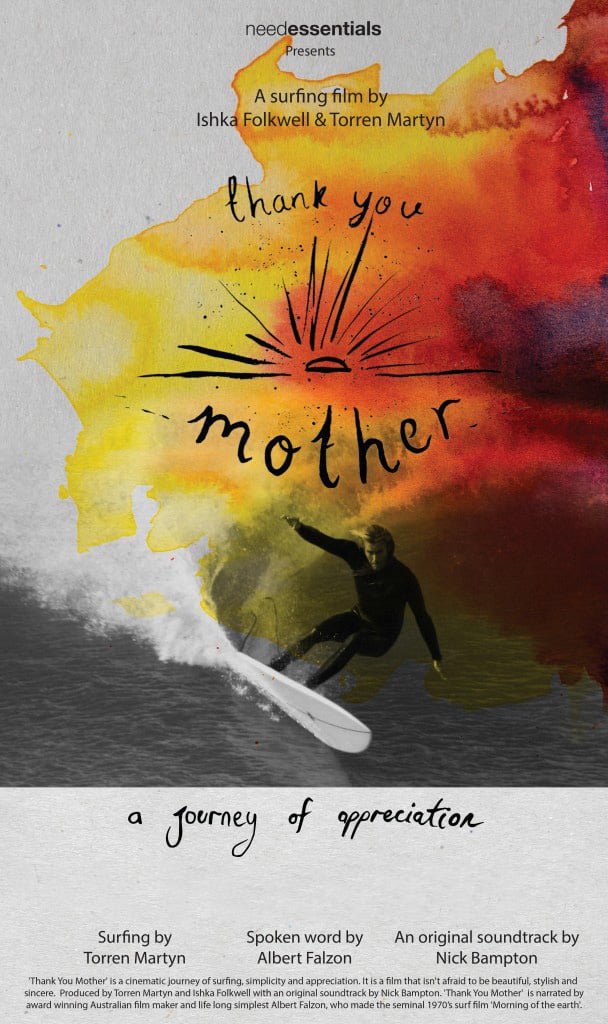