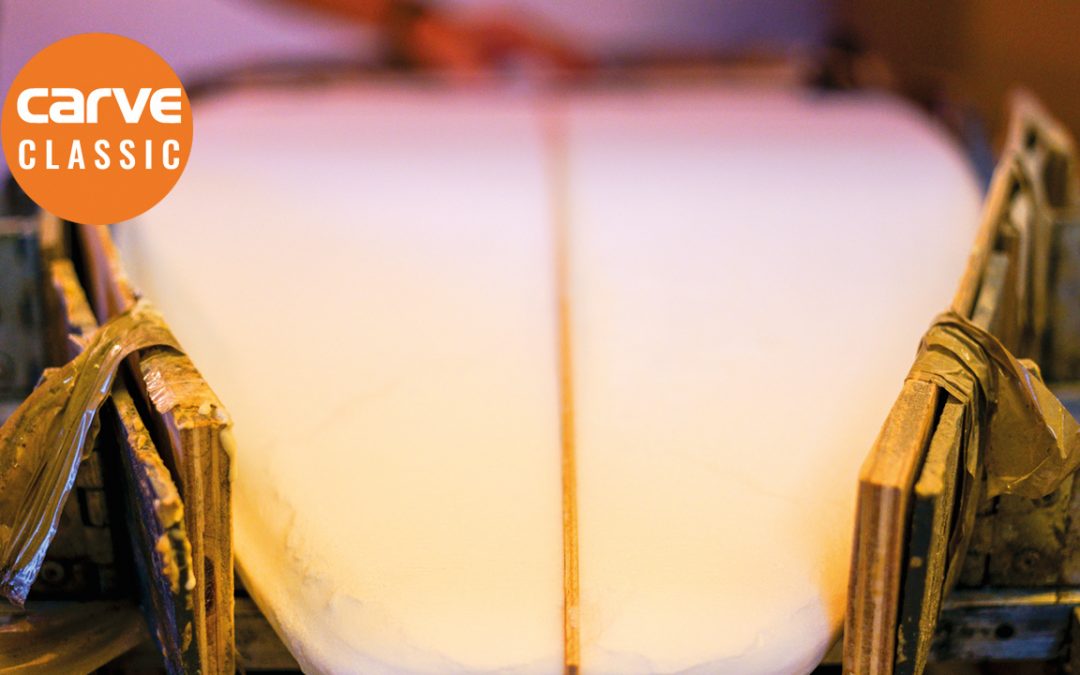 Join us as we delve into the Carve Classic archives for some all time trips and interviews. Sharpy investigates deeper into the dark art of foam blanks and how they are produced. Originally featured in issue 184.

When you order a new board you think about the shape, dimensions and possibly a fancy spray job. As long as it paddles well and gets you where you want to be on waves then your shaper will be happy.
While researching rocker, tail shapes, concaves, fin systems and volume do you ever give a thought to the meat in your fibreglass sandwich? The foam blank is the heart of your board, and not all foams are created equal and did you know you can ride blanks made here in Cornwall?
ProFoam, previously Homeblown, is now headed up by Martin Mynne who took over from Tris, and we went for a look at the process of taking chemical soup to a ready for shaping blank…

First up what the hell do you do here?
Make surfboard blanks from start to finish. We blow the foam on site, try and source everything as locally as we can and really try hard to head down the green path as much as we can. We’re talking to chemists at the moment and we’re developing new formulas for a whiter, greener foam, so we can have barrels of chemicals without skull and crossbones on them…

Has the main chemistry changed since the ‘60s?
Not for most manufacturers, for us it has, as the company was originally started with a different formula. An MDI versus a TDI technology, one is basically a lot less volatile than the other. The MDI (methylene di-phenyl di-isocyanate) which we use, which took a lot of time to perfect, is safer for the end user, safer for us blowing it and it doesn’t become airborne like TDI does. So the shapers aren’t getting exposed to anything bad either. TDI (toluene diisocyanate) is toxic as hell, carcinogenic, volatile and explosive, a total nightmare.

There must have been a lot of cul-de-sacs with regards to trying different chemical mixes?
I’ve only been involved less than a year. I’ve come from a composite race boat background, so I’ve got lot of contacts in the chemical industries, so I’ve been pulling strings with people there. It’s an avenue that wasn’t open to the old owners. We’ve been working on new stuff for six to eight months so we are bench testing new formulas now.

Must be a long process to experiment with blanks?
You can’t just knock something up and put it out on the market. It’s a lot of work, a lot of testing before you can even blow blanks. But when we do we’ll give out some free blanks to the shapers to try then get feedback from them and get their riders to try and destroy them.
We’re working with quite advanced chemists so they’re giving us mixes to try. It’s subtle changes. They’ve been here on site so they know what we are trying to achieve. The problem they’ve had here over the years is the yellowing of the foam. The trade off with the safer, less polluting method of production is the blank goes yellow quicker. They all do eventually due to age and UV exposure whatever the method. The only way to get a pure white board is to spray the foam before glassing. Which makes a lot of sense, there’s no point messing with the chemistry of the whole blank for a superficial surface effect. Whiteners affect the reaction for the whole blank so it’s a tricky one to work with. As surfers we’re vain and want pure white boards, if we were happy to ride patchy brown boards we could make really environmentally sound foam. Polyurethane foam without additives isn’t the nicest colour but it’s the safe and more environmental option.

Is most of the foam used in the UK blown in the UK?
No. We’re the only UK manufacturer of blanks, so there are still plenty of imports. We are here to compete with that. The advantages of us being here are obvious. We are down the road, you need a specific blank, say you want to work on a gun blank, we can work with them on that and share the costs of moulds, you want to do a custom rocker we can do that. Order turnaround is fast. You’re not waiting on a container ship to chug across the Atlantic. Our foam is as good as any other foam on the market and it’s non-polluting, responsibly sourced materials.

Clark Foam is the historically famous US blank manufacturer, did they close because the EPA was on their case?
They used the TDI chemicals, nasty airborne volatiles, you wouldn’t have been allowed in to to take photos of the blowing process. It’s nasty stuff. Full respiration suits and all that to work with it. To do that process you’d need a site bigger than our whole operation just for the filters and scrubbers.Breathing that stuff in isn’t any good for you. Understandably using those chemicals is prohibitively expensive for good reason. Our process makes the health and safety side a hell of a lot easier.

Before you started ProFoam what was your path?
I’ve gone full circle. My first job was actually on this estate: polishing windsurfers and surfboards for Limited Edition when I was 15. From there I learnt to sand, laminate and then went away and did some boat building for a few years. Then Chops Lascelles called me to come run his factory as he wanted a rest. That turned into an eight year stint. We were so busy, putting out a 1000 boards out a year. Then I went back to the racing yacht building side of things. America’s Cup and Volvo Ocean race stuff. Worked on five different Volvo boats and recently been working with Hugo Boss on their Vendee Globe boat.

How much is an America’s Cup boat?
Five mill for the full package. It’s pretty nuts. They’ve just released a new ruling so its back to monohulls as the catamarans were more about the tech not about sailing. So now it’ll come back to more real sailing expertise. I keep my finger in that world with maintenance contracts still.

Where’s the material research happening?
F1 is glamorous but it’s a production line laser-cutting carbon, boat building is a lot more creative, so for what we do the boat side is more relevant. They are the avenues I have to draw technology from. It’s not a fast process. There aren’t any other guys to compare notes with it’s a niche operation. But our foams are used outside of surfing, tooling, signs, model makers, so we’ve got other guys to create for.

How long does it take to make a blank?
From wet chemicals it’s 10 minutes to pour, 20 minutes to expand in the mould, then we cure them overnight. It’s like something out of Wallace & Grommit as you’ll see in a minute. It’s a mad machine with a computerised pouring head. One thing with our method, our foam is constant density all the way through, which makes the shapers lives a lot easier. Imported foam gets softer in the middle with a harder crust. It’s also closed cell which is waterproof so handy if you ding it.

Finally what do you want people to know about ProFoam?
We want to push it to surfers, we’ve got a massive carbon footprint, wetsuits, boards, leashes and travel. And people are paying over the odds for shadow shaped imports. Buying your blank and board from guys down the road is a start at least. Shipping miles are reduced and it’s supporting local shapers, Markie, Skindog, Luke and loads of others are doing boards equally as good as anyones. Make a relationship with someone here. And they’re now working with foam that makes their life easier. Consistent density foam is so much easier to work with than the alternative. The boards go well which is the main thing and we can make their work easier. We’re working on a new gun blank with Luke one that the guys surfing Mully will be riding, rather than working from a cut down longboard blank. We just want to innovate and be at the heart of people’s boards in the future.