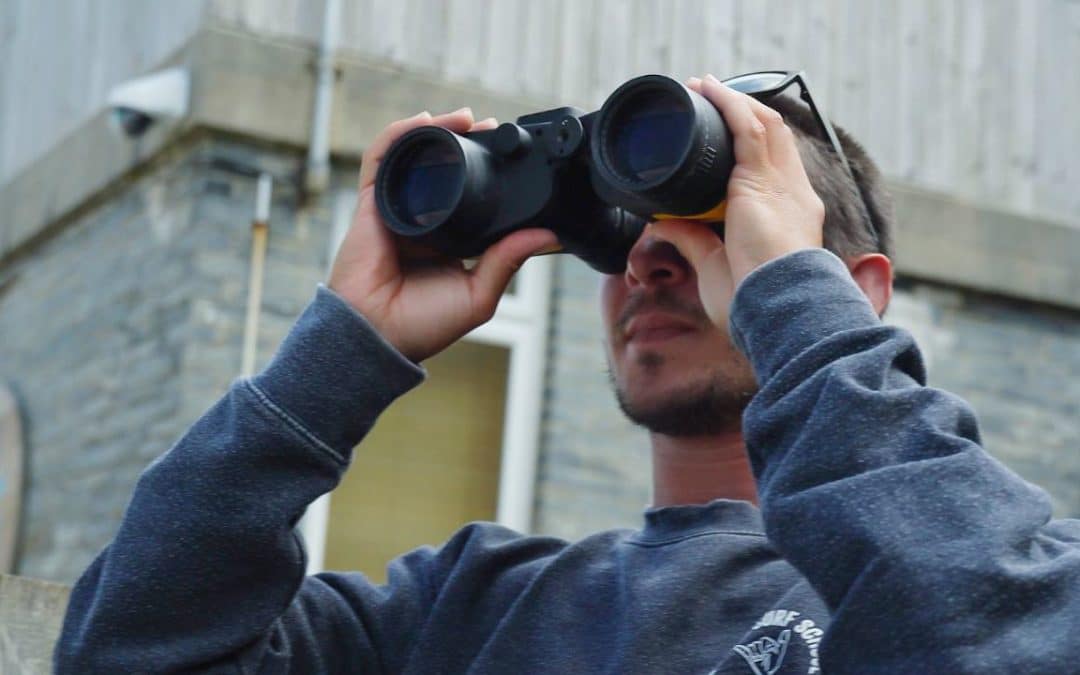 The film follows ex lifeguard and owner of St Ives surf school Harris Rothschild and his friendship with the rest of the volunteer team.
The team covered the work that the RNLI couldn’t do as they were not up and running. And during the early summer months, they saved lives for their community with no thought for money or recognition.

Adam looked at Morgan with a smile “well, what the f*ck are we gonna do now….” COVID hit us like a train. In one day, we went from running a thriving film company, Twin Fin Film Co., to a couple of guys waking up each morning with little more to do than make coffee and crack Joe Wicks on the TV. Locked out of our studio it seemed as though we’d have no way to make a film, even if something spectacular did occur whilst the nation was locked away in their living rooms. Little did we know we were days away from grabbing the cameras and starting to document a story of bravery and sacrifice from a sunny South Western town on the brink of tragedy. To back track a little, it wasn’t just our Cornish world that had shut up shop, businesses around the globe had come screeching to a halt and along with them had gone almost every aspect of the daily life we’d been enjoying since turning self-employed. Mornings felt strange and unstructured without the daily ritual of waking up and deleting a host of spam emails, no time driving to shoot locations to squeeze in a podcast, and no 10 o’clock meetings to force us out of bed. It quickly became apparent that the coming weeks would be a test of emotional stamina, locked away from friends and family and with less work than usual to keep us preoccupied there was at least one silver lining, empty days full of possibility and a blip of groundswell heading straight for Cornwall. With our calendar free there was nothing stopping us sneaking out for a morning surf and so, within 24 hours of checking the forecast we were sat in a grey expanse of rolling ocean. Down the bay on a neighbouring peak sat a few socially distanced and likeminded individuals who like us were desperately trying to forget that there was a pandemic on the other side of the waves. Of course, there was no escaping it, and with news of the ‘real world’ following us out past the shorey, it wasn’t long before I overheard a couple of guys talking about a tragic event from earlier in the day where a surfer had lost their life up the coast. 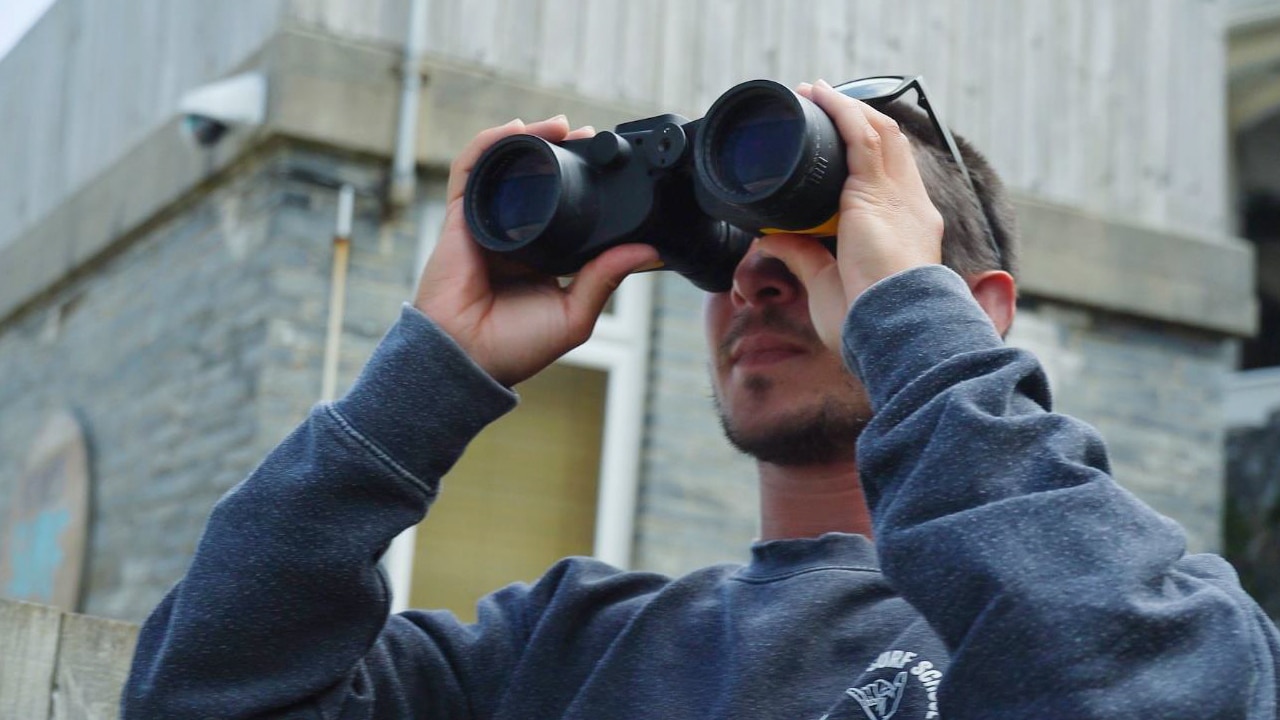 Back at home I hopped onto every news outlet I knew of and started looking up the terrible news about recent fatalities on Cornish beaches. What I found was a mix of horror and heroism, the absence of RNLI lifeguards and stormy conditions whipping up a recipe for disaster, but also the news that teams of volunteers up and down the coast had taken steps to wrestle fate into their own hands and come forward to keep their beaches safe. The next day I gave our director of photography a frantic call – “Adam, we have to go make a film about the volunteer lifeguards in St Ives!” Whilst I’d been reading accounts of groups all along the coast forming these initiatives, one had stood out for me the most. Tucked away behind the dreamy cobble stone streets of St Ives is a beach named Porthmeor which, due to its fast, slabby wave and a set of notorious rips and currents around exposed rocks, was something close to infamous in the surfing community. Having surfed this beach for years I was shocked by the potential for danger it held unguarded, and in awe of the team risking their own welfare to keep others safe. I had to find out more.

To set the ball in motion I reached out to Harris Rothschild, owner of St Ives Surf school on Porthmeor beach and one of the central figures behind the St Ives volunteer lifeguarding initiative. Hopping on the phone with him, Harris explained everything the team had been up to, giving me a quick run down of their situation, how the community had rallied behind them and the intrinsic responsibility they all felt to keep their home safe. I was instantly hooked. Fast forward to me calling Adam, a few hectic days of pre-production and us arriving for the first day of shooting on Porthmeor beach. We rocked up to meet Harris and the rest of the team on the beach during their ‘shift’, finding ourselves quickly greeted by a friendly group, tucked in a corner of the beach where normally you’d find the RNLI guards on duty. 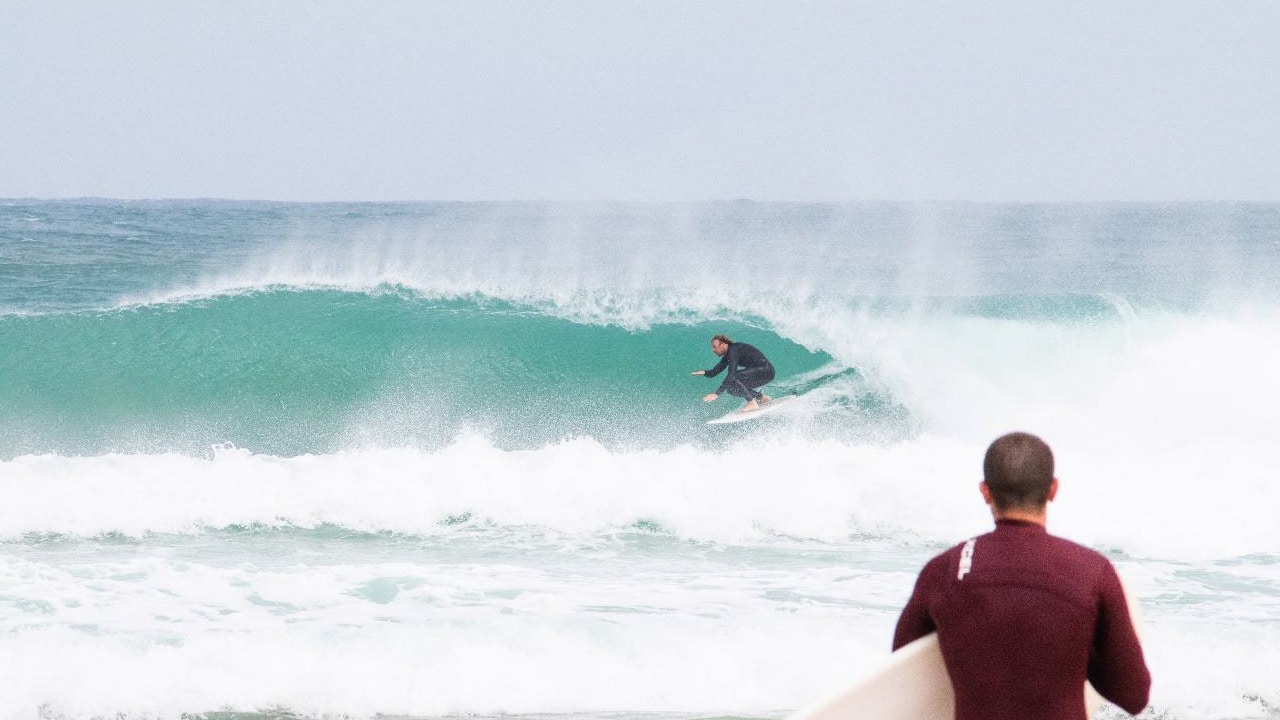 With their lookout point cordoned off we exchanged the odd new ritual of a socially distant hello, exchanging waves and the obligatory ‘I would shake your hand but…’ Settling in with them for a day we did our best to stay out of the way of the team, allowing them to continue providing their service and keep the beach users safe. One by one, when they were free, we took the team off, measuring out the appropriate distance and conducting informal chats from 2 metres away. Far from an investigation, this was just a chance for us to get a feel for the individual emotions at play, the fears and strengths which prompted each of these people to step forward in a time of crisis. We knew their actions had been covered at least in brief by the local news and so we what we were especially interested in hearing about was each person’s unique reaction to the situation, what motivated and inspired them to get involved and the impact they each hoped to have. To start with there was a little bit of the usual professional tension. The team were looking at the cameras like we were some kind of prime-time reporters. Backs were straight and everyone was warily well spoken, until someone let slip the first “f*ck” in interview. The air cleared as we laughed it out and we dove into exploring the thoughts and feelings at play. 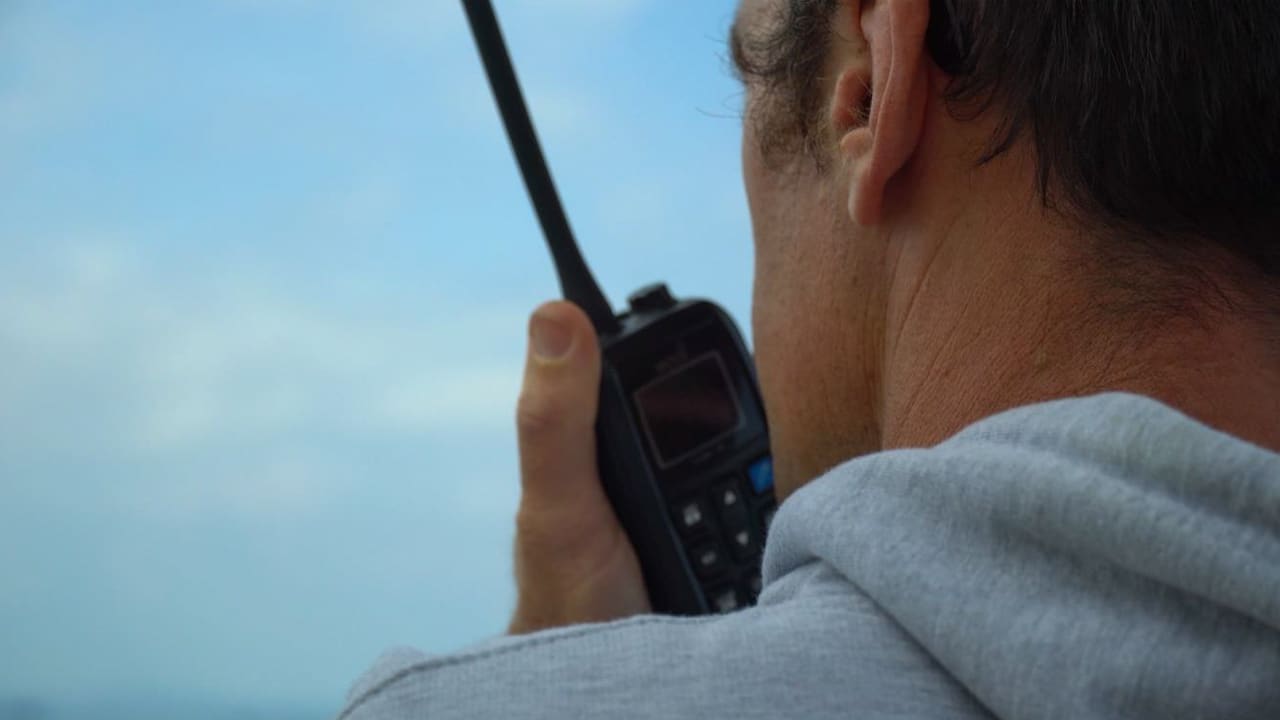 What we uncovered from there was the instinctive sense of duty that the men and women of this one Cornish town felt towards their stretch of the ocean. There’s a lot of respect for the lifeguards and those that work on the beach amongst St Ives locals with one of the younger volunteers, Matt, telling us how the positive impact the professional guards had had on him as a young surfer was now inspiring him to continue that cycle of knowledge and support. He recalled being “always quite worried about bigger waves when [he] was little, paddling out and being super scared, super freaked out and then you paddle out and see a friendly face on a paddle board asking you how you are, how your surfs going… makes you feel a lot more comfortable in the sea, especially as a younger guy” For him, becoming that friendly face always on hand to give a confidence boost to the next generation of beach users is like a debt that is happily repaid. Thankful for all the help and support he received from the lifeguards and older guys at the beach, he didn’t hesitate to sign on as a lifeguard, both for the RNLI and the volunteer initiative, and give back to the community and beach culture to which he owed so much.

A lot of surfers have respect for the lifeguards who watch over us in the summer months for a whole range of reasons. Whilst we can all get frustrated with the way the red and yellows always seem to be right over the best break on the beach, at the end of the day we understand the ocean well enough to know what they’re putting on the line for us. What we quickly learned in St Ives was that this admiration wound its way back from the waters edge, into the shops of grocers and carpenters who likewise understood the sacrifice this team of volunteers was making and were all too ready to offer any support they could. From fresh fruit and hampers, to handiwork and uniforms, we found the whole town had rallied behind the team, providing them with whatever they could in their mission to keep the water safe. 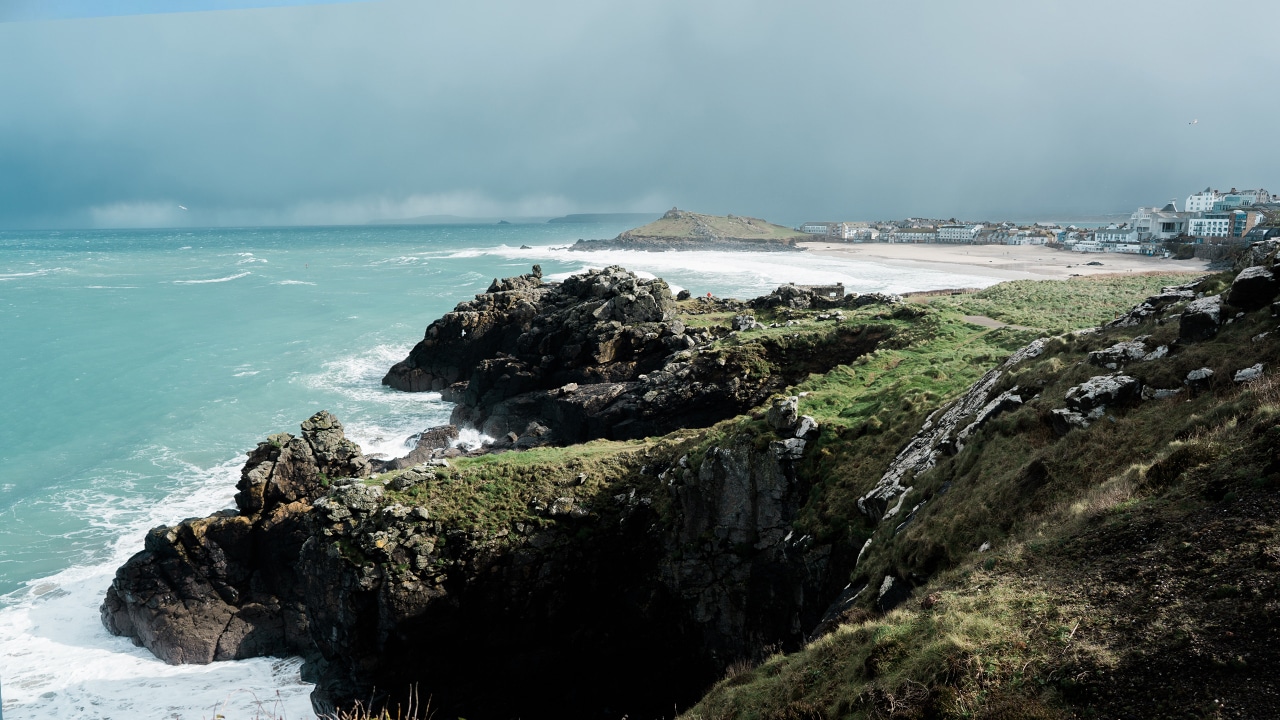 Speaking of acceptance, on the first day of shooting Harris told us with a dejected look that we wouldn’t be able to catch Steph today. A Northerner of near mythic renown who’d moved to Cornwall decades ago and since become part of the St Ives community, Harris had mentioned in our initial phone call that we absolutely had to interview him and no story would be complete without a word for Steph. Catching him on the second day he was a gold mine of incredible information and harrowing stories, kicking off our interview with a lesson that in some ways would come to sum up the whole volunteer initiative. “If you’ve got knowledge you have to pass it on, that’s the responsibility of knowledge.” For Steph, a professional lifeguard who’d be watching over Porthmeor and the surrounding beaches for decades, the whole reason for volunteering was to continue that act of helping others. He told us how when he was a kid he looked up to the lifeguards as mini superheroes, taking the advice and inspiration they gave him and forging it into a career. In his own words “you can grow up next to a garage and it doesn’t make you a mechanic, it’s the same with this, you can grow up next to the ocean and still not fully understand it.” It’s that lack of understanding which makes the ocean such a dangerous place, and the exact thing that he’s dedicated his life to overcoming. At the waters edge each day Steph, along with the rest of the team, would take countless preventative actions, keeping people in the know and able to make responsible choices about their own welfare.

At the end of a couple of days shooting we’d heard from a horde of amazing volunteers and witnessed first-hand the generosity and support flooding out of the town as we’d had our cameras switched for coffees one morning by appreciative café owners. The initial wariness about being on camera had given way to genuine interactions and we’d seen the personalities of all the guys shine through. Not long after we’d finished shooting, the RNLI put limited cover back on the beach and the team melted away as inconspicuously as they’d arrived. With all the footage and audio we could need and the team now freed up, there was one final thing we wanted to get done for the project, a surf with Harris and the guys.

Taking the camera for a dip we get some shots of them trading waves, before making our way home back across Cornwall. The film itself features the whole story, named Ours to Protect, it documents the way the team came together instinctively, how the town rallied behind them, and the individual relationships with the ocean that drive people to put their bodies on the line for the sake of others. Told through Harris’ own unique connection to the beach of Porthmeor, it’s a story about selfless actions and community spirit, in the words of man who pulled a town together in a time of crisis.