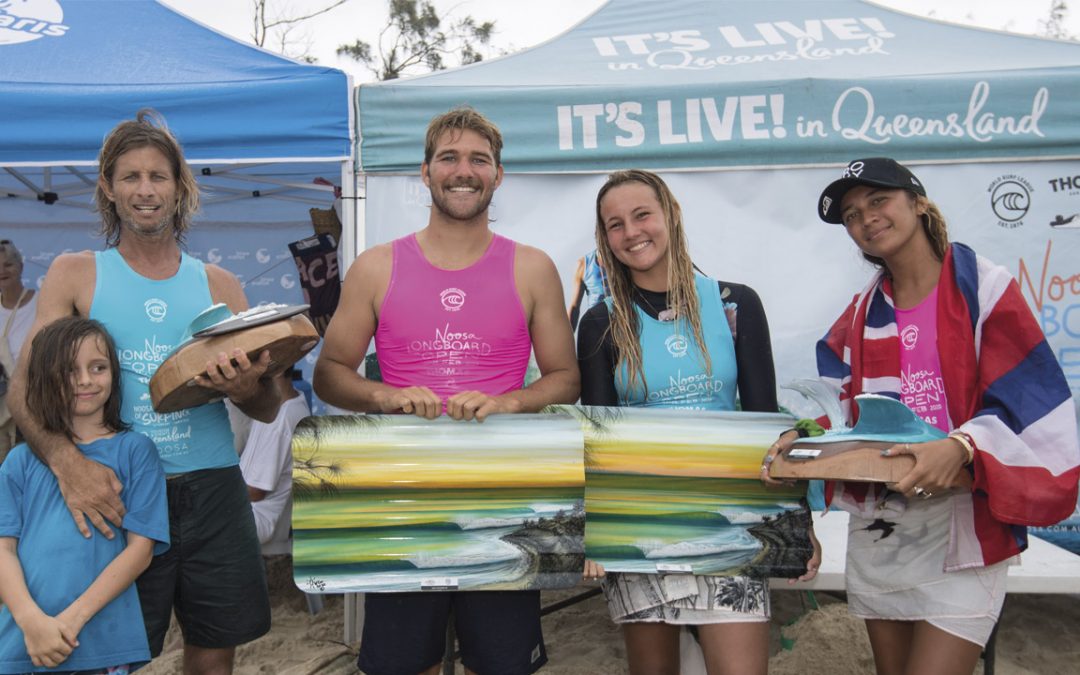 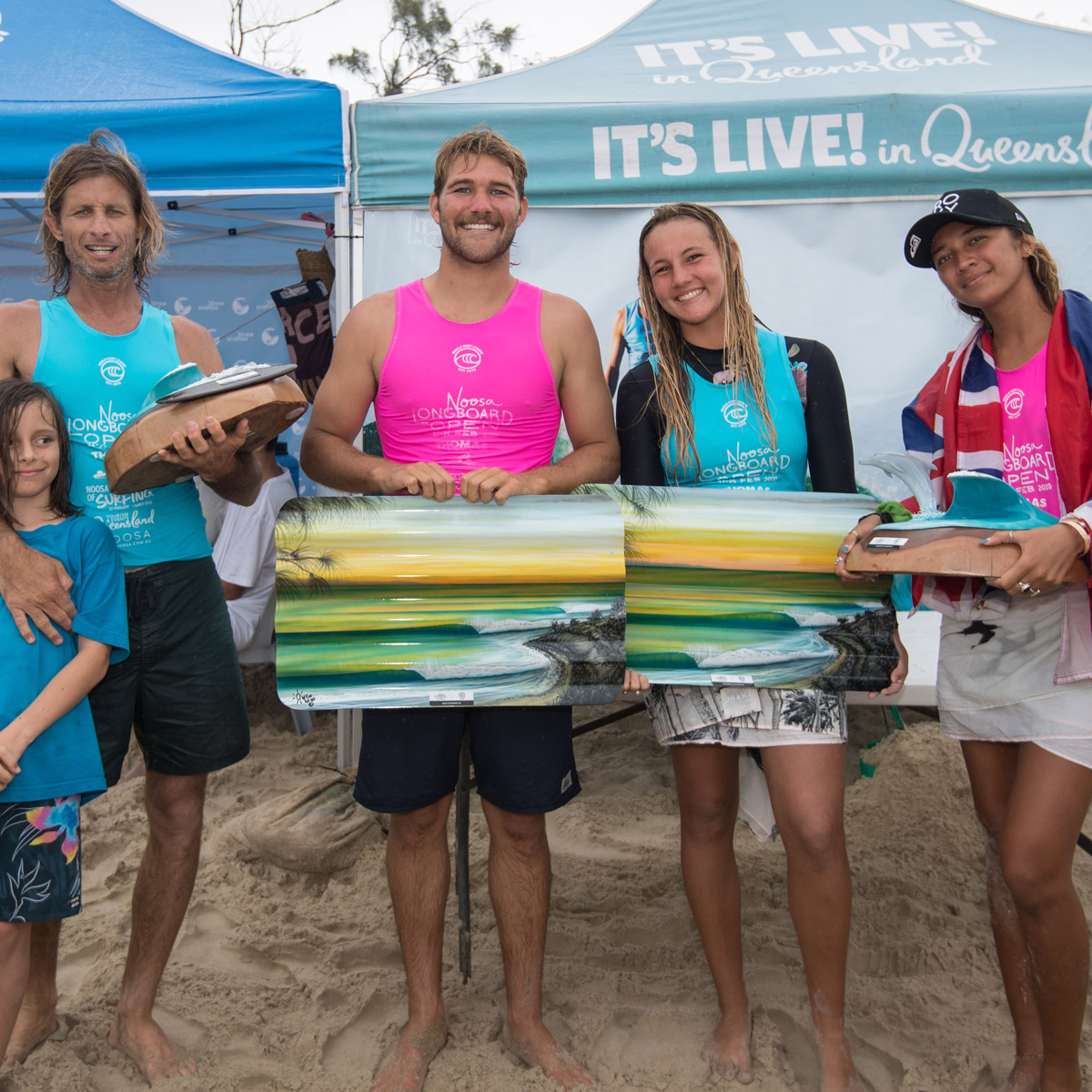 15-year old Kelis Kaleopaa (HAW, below) travelled to the Noosa Longboard Open 12 months ago to compete in her first-ever WSL event. One year later and Kaleopaa is the Longboard Tour Rankings Leader and in the box seat to claim her maiden World Title. After an impressive performance all week at Main Beach, posting some of the highest wave and heat totals of the event, Kaleopaa eventually met her good friend Sophia Culhane (HAW) in the Final. Culhane looked solid from the start but couldn’t overcome a rampaging Kaleopaa, whose poise on the nose and ability to read waves, saw her take the win with a two-wave total of 12.26 (out of a possible 20). Kaleopaa has shown that she is at the forefront of a huge push coming from Hawaii on the WSL Longboard Tour.

“I’m so happy right now I don’t really know how else to explain it,” Kaleopaa said. “Sophia is one of my best friends from home and we surf together every day so this is such a dream. I cried when she made it into the semifinals because I was so happy for her. It’s been amazing here in Noosa to have all of the crew from Hawaii and Waikiki supporting each other. All of the Hawaiian’s were surfing so well which was awesome to see. We all surf together, all day every day and this week was no different. We’ve all had so much fun.” 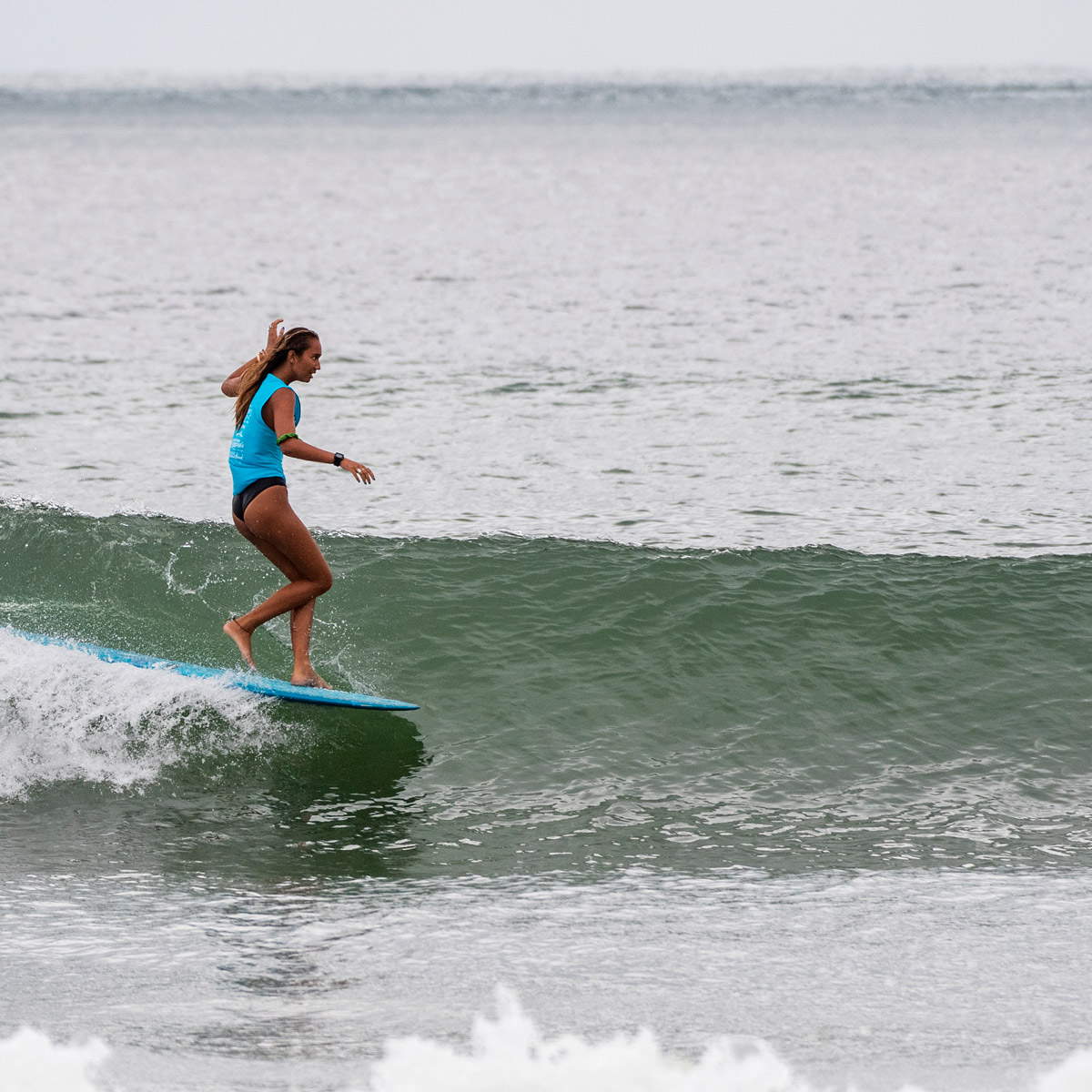 Almost 20 years after his last appearance at the Noosa Festival, and 16 years since his last ASP / WSL event win, Joel Tudor (USA, below) has taken another major victory, at the ripe age of 43. A two-time World Longboard Champion (‘98 and ‘04), Tudor is an icon of surfing and longboarding in particular, winning his first professional event at 15. He is now running his own logging invitational events, the ‘Vans Duct Tape Series’ globally, celebrating traditional longboarding. Tudor made a trip to Australia to surf with his sons on the points of Noosa and check out the Noosa Festival and was given a wildcard into the event, which he then went onto win. Tudor now finds himself sitting in No. 1 on the World Longboard Rankings and with no choice but to go for his third World Longboard Title.

“I think the last time I won this event was 20 years ago and most of the competitors here this week weren’t even born,” Tudor said. “Then I won my last ASP event 16 years ago so it’s been a long time since I’ve been here. I didn’t really plan on competing in this event, then I got the wildcard and kept making heats and found a rhythm, it wasn’t until the semifinals though that I knew that I could win. It was cool to come up against Kevin (Skvarna), he is one of the best guys at the Duct Tape events so it was rad to share a heat with him. The best part of this win is that my kids are here. They’ve seen the trophies and heard the stories but now they’ve seen their dad win, something which is really cool. I suppose I’m going to have to go for my third world title now, which will be epic.” 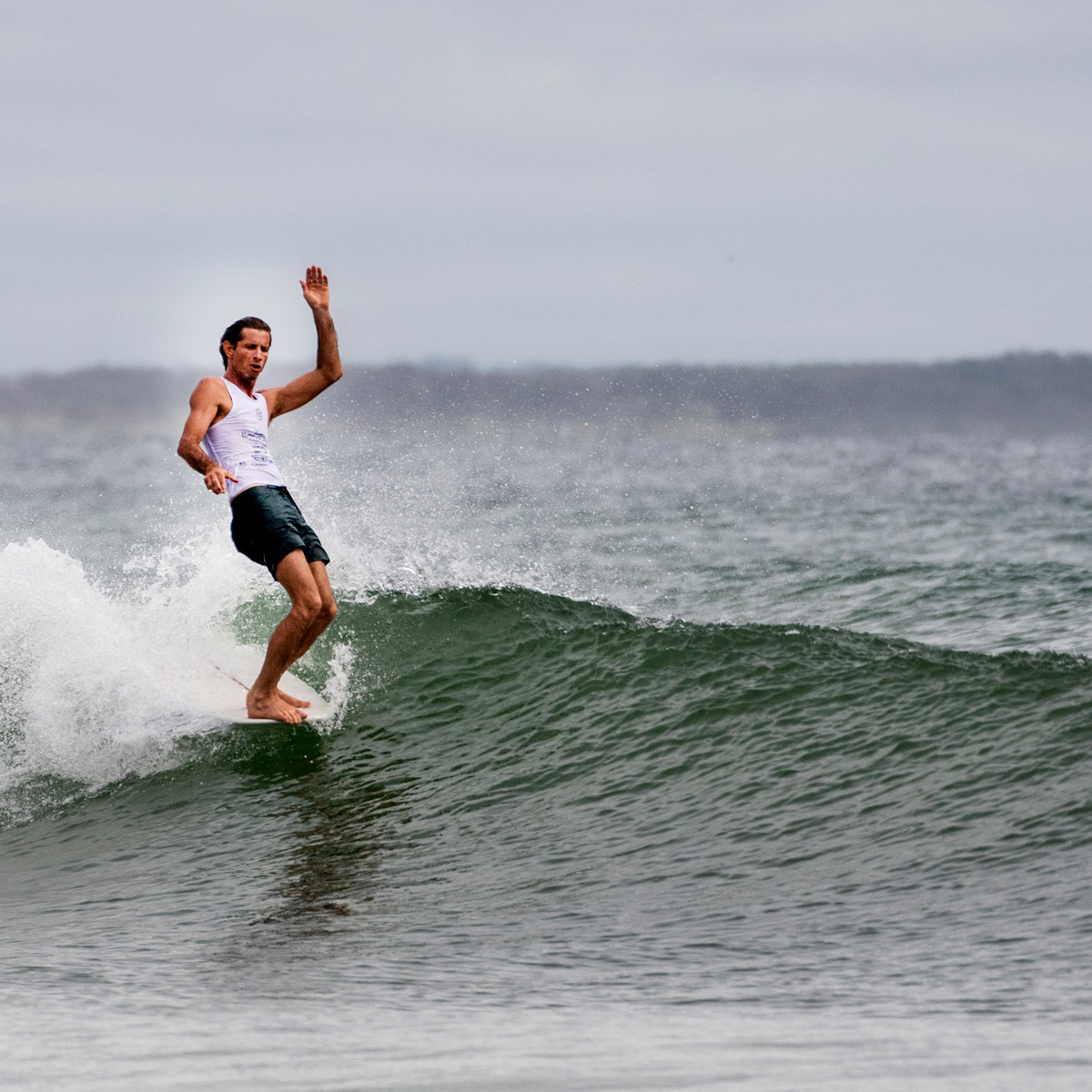 A solid member of the huge pool of talent coming out of Hawaii on the WSL Longboard Tour is 14-year-old Sophia Culhane (HAW) who came to Noosa this year to compete in her first-ever WSL event. Hoping to enjoy some fun with friends and gain some experience surfing heats with the world’s best, Culhane was the most surprised when she earned her spot in the
Final, with good friend Kelis Kaleopaa. Although she finished short of the event win, the new world number two leaves Noosa as a leader of the huge pack of surfing talent, representing Hawaii on the 2020 WSL Longboard Tour.

“I can’t believe I’m number two in the world at the moment,” Culhane said. “That’s not what I was expecting this week. I couldn’t have done it without all of the support of my Waikiki family who has been cheering me on from the beach all week. Surfing a final with Kelis was so amazing. She is such an amazing surfer and I’m so happy that she got the win. She deserves it so much. I can’t wait for the year ahead — I’m so stoked.”

At only 22-years-of-age, Kevin Skvarna (USA below) could almost be seen as a veteran of the WSL Longboard Tour, with the Californian competing for a world title since 2015. A true believer in the traditional aspects of surfing, Skvarna has found his feet on the new look WSL LT and today his success was a testament to his persistence, as he found himself in his first-ever WSL event final against one of his idols. Skvarna will now focus on the year ahead as he looks to clinch an event win and with it his first WSL World Longboard Title.

“Surfing in a final like that has been a long time coming,” Skvarna said. “I’ve been doing this for a long time now and I feel like the direction the WSL LT is now taking suits my surfing a lot more, which is cool. This new direction has opened it up to a lot greater young surfers and it’s really cool. We are all a big travelling family and the tour is really fun these days. I can’t believe I just surfed a heat with Joel Tudor, let alone a final. He is the man — like there are only a few godfathers of longboarding and he is one of them. I’m just so stoked to have made the final today. It’s an amazing feeling 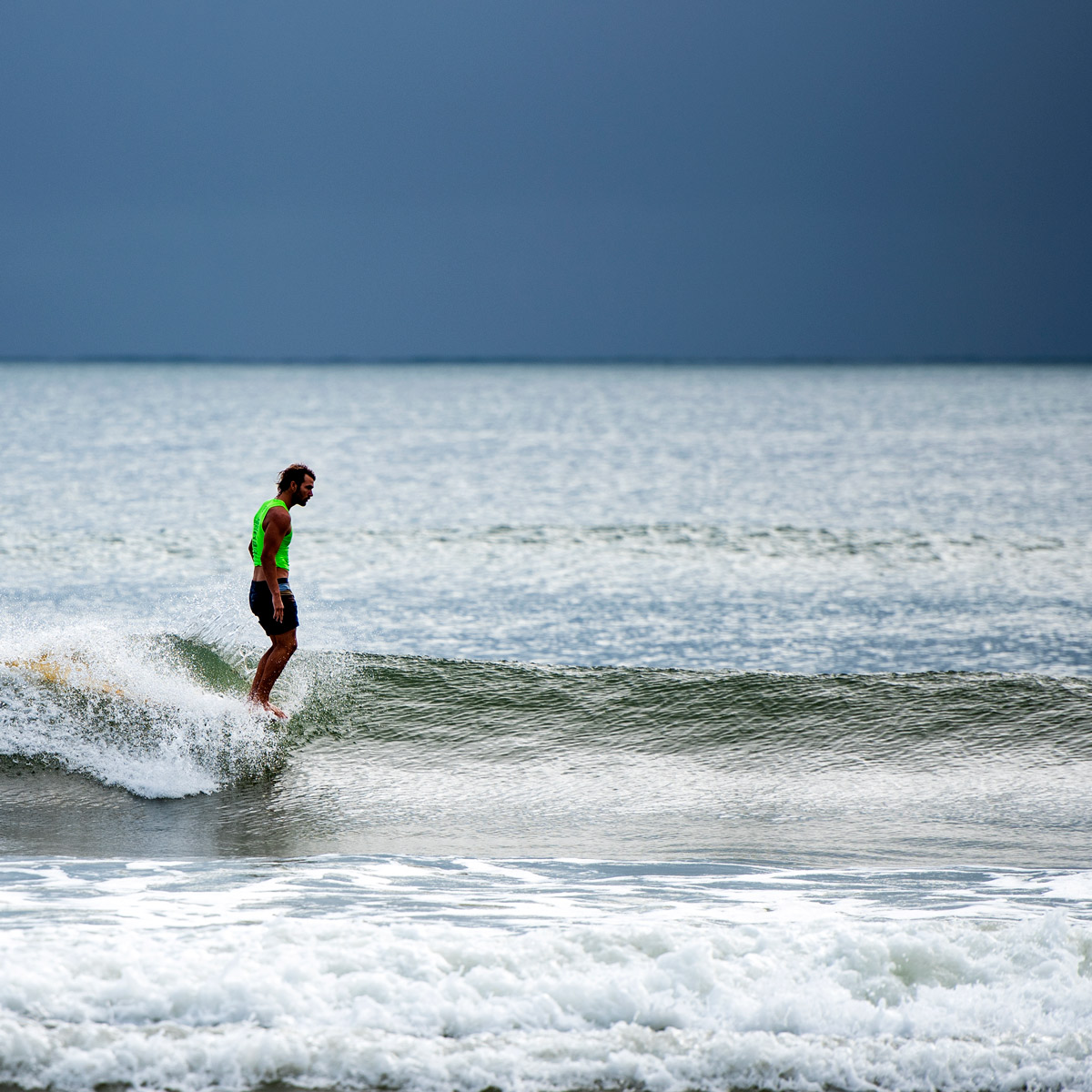 Britains Ben Skinner (below) went out the semi final by 0.07 of a point after Kai Sallas racked a buzzer, and Ben, beating last ride of 5.87 in the final seconds to join Joel Tudor in the semi finals. 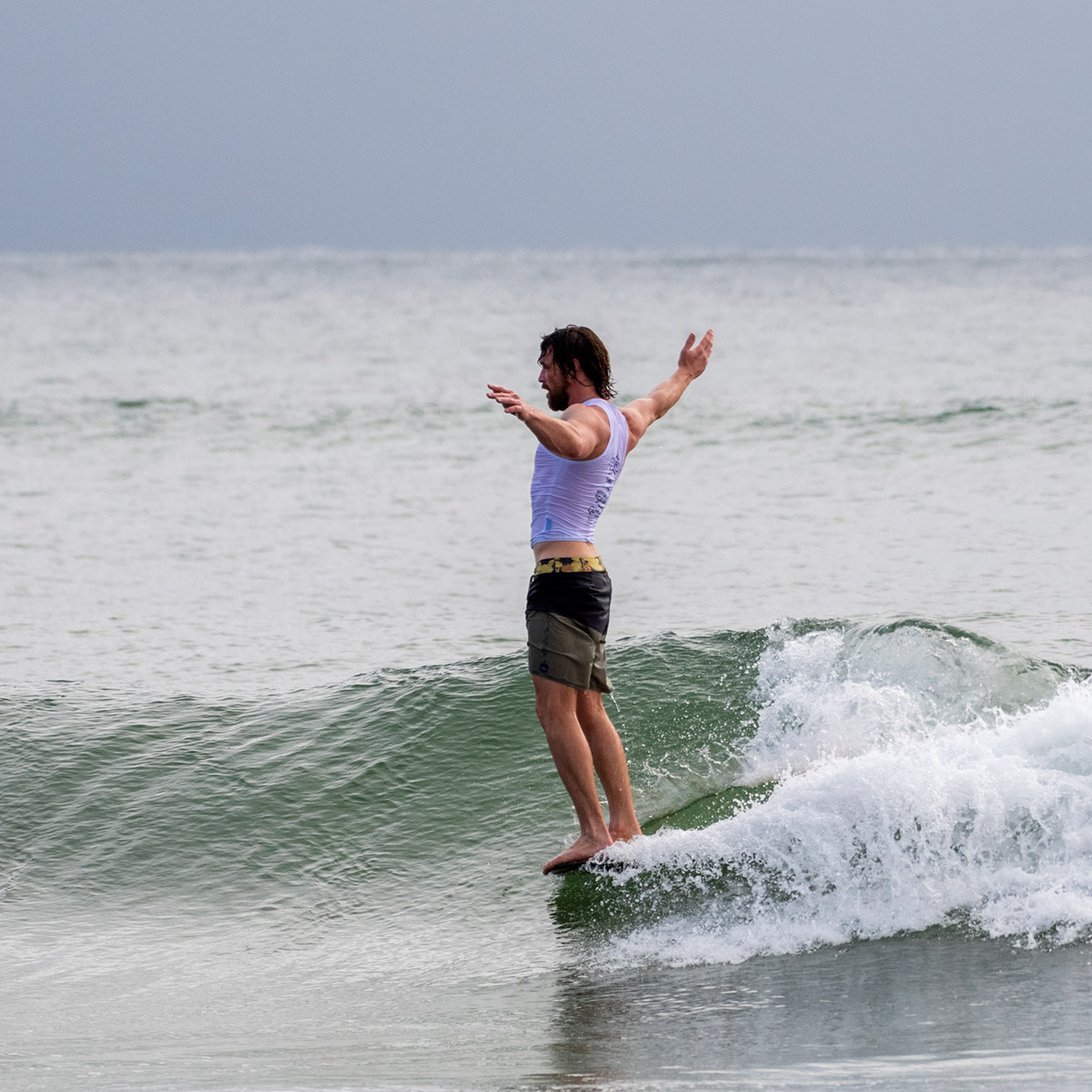