HEAD SOUTH THIS WINTER FOR SUNSHINE, SURF AND SUBLIME SEAFOOD

Escaping the Northern European winter is a wise idea at least once a season. Get yourself some welcome vitamin D, see some sunshine, get some fresher than fresh seafood down your gullet. If you can team that up with scoring some world class surf then all the better.

One option that always crops up in the ‘where to hit for a winter run’ discussion is the Canaries. 60 miles off the coast of Morocco they’re far enough south to be actually warm, but close enough to not be a hassle travel wise. Plenty of wave options from mad barrels to beginner beach breaks and with EasyJet and co now running flights it’s also a bargain destination flight wise.

The volcanic islands once known as the Fortunate Isles didn’t get their name from tweety birds but from dogs, ‘Islas Canarias’ comes from the Latin name ‘Canariae Insulae’, meaning ‘Islands of the Dogs’. But they’re a lot nicer than the Isle of Dogs in London, that’s for sure.

There’s surf on every island but we always gravitate to the stunning volcanic landscapes and reefs of Lanzarote and Fuerteventura.

Both islands have been popular with Brits since the surf potential was unveiled in the late ’80s and there’s a thriving surf scene wherever you go. Being popular with normal tourists also means rental cars and food are well priced and getting supplies is a doddle.

Of course local knowledge is key for any trip so check out the crew featured here that offer accommodation and coaching. They’ll get you wherever is best for your abilities and make sure you get the maximum enjoyment from your mission. Not to mention pointing you in the direction of the best bars and restaurants.

An annual Canaries mission is as essential as the summer Europe run … get stuck in.

WHEN TO GO: October-March
AIRPORT: Arrecife (Lanza) and Fuerteventura from all main UK/Ireland hubs
ACCOMMODATION: See our recommended guide 0verleaf.
LANGUAGE: Spanish
CURRENCY: Euros
RUBBER: A 3mm will do ya.
WATCH OUT FOR: Urchins, sharp reef and sunburn
AFTER DARK: Depending on where you stay it can be delightfully quiet and chill or bonkers mad party time. Whatever you desire in essence.
ALTERNATIVE EXCITEMENT: Ride camels, parasail, explore volcanic landscapes, snorkel in ridiculously lively seas, then eat those critters.

TAKE A LOOK AT OUR RECOMMENDED ACCOMMODATION OPTIONS:

Surfing, yoga and Pilates is the perfect match. Join us on our paradise island to deepen your practice, experience the thrill of Europe’s finest waves, or to simply indulge in the relaxing massage therapies. Whether a solo adventure, with a a friend or partner, every detail is taken care of.

With healthy and delicious food and a warm friendly team, all set within the rejuvenating and chilled wellbeing environment of Europe’s leading yoga and pilates retreat, this experience is so much more than just a holiday. Tranquil, beautiful accommodation, empty white sand beaches, world class yoga and pilates teaching, knowledgable and safe surfing instruction plus food that will leave you feeling refuelled and inspired. This is the Yoga, Pilates & Surfing retreat that you can come home to.

Discover your perfect activity, at your pace, guided and supported throughout your journey. Make your next surf holiday an experience to last a lifetime.

A home away from home, The Canary Islands: Oasis Surf House is a B&B Guest House set on a mountain side in a quiet rural village, away from the crowds and close to the surf.

With shared, private and family rooms available, we have options for all budgets and travelling situations. For lunch and evening meals there’s a great choice of restaurants in neighbouring villages or you can hit our village store for local and authentic delights and prepare a feast in our fully equipped kitchen.

The north coast of Lanzarote is a playground for any surfer, beginner to pro and Oasis Surf House is perfectly located between two famous surf spots; Famara and La Santa. Post surf, watch the sun go down whilst enjoying a BBQ and fire pit and take in the stunning views from our rooftop terrace. Plus there’s cycling, hiking, wine tasting, sunbathing and more!

The Protest Surfcenter in Corralejo offers all you need to boost your surfing to the next level: a pro surf shop with the best brands, board rentals, an official surf school for beginners as well as advanced surfers in small groups, and package surf camps in our cosy Surfhouse (shared dorms or private rooms), Sports Luxury Hotels or private apartments and houses.

The staff are all experienced and motivated surfers with good vibes, who love to pass their local knowledge on to you. Fuerteventura has summer temperatures and sunshine all year round and because of it’s round coastline shape there are always perfect waves to find no matter what the weather or wind conditions bring.

The instructors know the island as no other to make sure you get the right waves for your level and get the most out of your surfing holidays. Surf your dreams, relax and have fun!

Surf School Lanzarote has been considered to use the best technical coaching system for all levels of surfers for over 21 years. Coaching from beginner to WQS surfers we know our system works. Surfing is of course fun. Surfing even better than you have ever done, well it’s obvious. Just more fun! With amazing coaching, great accommodation, consistent surf and based all in the most stunning scenery imaginable. Come and join us.
With ratios being 4 to1and using experienced ISA coaches and daily video analysis our approach is to offer the latest sports science in surf coaching. This is backed up by 35 years of continuous qualified experience right through to pro surfers and national champions.
If its short board, midrange or longboard coaching you need we work with you in the most amazing surf conditions that provide a perfect platform for your surfing development. Come and join us.
Website
Email
Facebook
Insta

Canaries – Atlantic Isles where the Waves Pack a Punch 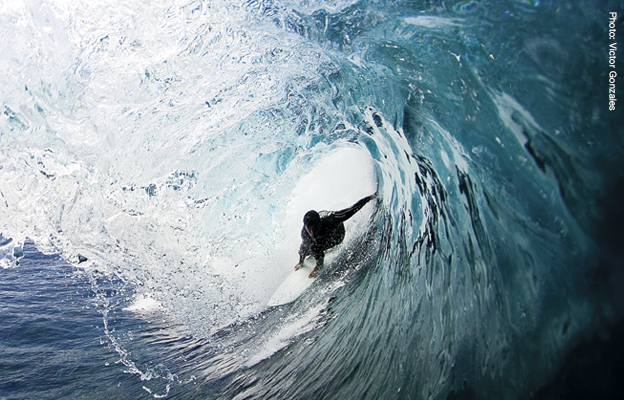 Ninety kilometres off the coast of Morocco lie a group of Spanish islands which have become synonymous with heavy waves – the Canary Islands. Entirely volcanic in origin, they’re blessed with year-round sunshine and epic waves. Dubbed the ‘Atlantic Hawaii’, some of the Canaries’ urchin-infested slabs hold incredibly heavy waves with barrels as thick as hydrodynamic theory allows. The islands are surrounded by deep water so incoming swells slam in with full Atlantic power producing thick, heavy waves which require 100 percent commitment from the second you think about getting to your feet. What comes next depends on your ability to control your rail and line up the section; if you don’t, you’ll suffer the consequences. From playful four-foot peelers to top-to-bottom quadruple-overhead monsters, Canarian reefs tick all the boxes. There’s also a selection of less intense beach breaks which can be fun, although the reefs are what the crowds froth over.

The islands hoover up swell from all directions, but most of the big winter swells come from slow-moving North Atlantic lows which churn out a steady supply of northwest groundswell throughout the winter months. Hurricane swells from the east coast of the US can also reach the islands if the storms peel away from the continent early and don’t dissipate too soon. Trade winds blow almost all year round, predominantly from the north east; the winds tend to be lightest in October and November.

There are seven main islands in the Canaries, and each offers a selection of surf spots ranging from good to world-class. Lanzarote and Fuerteventura are the furthest east of the islands and they’re also the least mountainous; consequently they offer the best access to the coastline and they have the highest concentration of breaks.

Lanzarote’s heaviest and best known spots lie in a cluster around the fishing village of La Santa on the north coast. El Quemao, a crunching left next to the village’s tiny harbour, bears more than a passing resemblance to its Pacific cousin Pipeline. Offshore on a southeast Sirocco wind, El Quemao will tear you a new orifice if you don’t treat it with the utmost respect. The takeoff is always steep, and you’ll need to nail a heavy bottom turn to line up the second section which can sometimes suck almost dry. El Quemao is shallow, fast, heavy and will give you a shot of adrenaline you won’t forget. The locals are a tight-knit bunch who aren’t too wild about visitors, whether you rip or not. Show respect and it’ll improve your chances, but even then they won’t welcome you with open arms.

A kilometre along the coast is La Santa Right (known locally as Morro Negro), a long, powerful righthander which breaks along a boulder-strewn point. It’ll hold waves up to 15 feet and can be world-class on its day, with big open walls begging to be carved to bits. The inside can sometimes get bowly, with the odd barrel to be had. The current down the point is quite strong and the paddle outs are wearing, but catch it on a perfect six-foot day and you’ll be hooting your head off. Get there early to beat the crowds.

Other quality spots on Lanza’s north shore include the heavily localised La Santa Left (‘The Slab’) and San Juan, a long smashable left.

On straight north swells a cluster of reefs on the east side of the island turn on. Jameos del Agua, Punta de Mujeres and Arrieta offer softer waves which will appeal to intermediate surfers more than the bone-crunchers around La Santa.

The long arc of sand at Famara provides a beach break option for beginners, although wave quality is dependent on the state of the banks. If the swell is from the north or northeast, another beachie to check out is Orzola on the far northern tip of the island.

Most of Fuerteventura’s best waves can be found at the northern end of the island, around the resort town of Corralejo. The Bubble, a few kilometres west of the town, is a sick A-frame which offers hollow lefts and rights breaking over a sharp, shallow reef. It works best on a northwest swell with a southeasterly wind. Deep-water waves jack up quickly and morph into good-length pits for those lucky enough to snag one off the locals. The Bubble is one of the busiest spots on the island and the locals aren’t too willing to abide by general etiquette, so expect drop-ins when it’s on, even if you have priority and have been quietly minding your own business for a while. Hang around, be nice and let your surfing do the talking, then you’ll have a better chance of taking one of the well-protected set waves. And get in early to avoid the crowds.

Other challenging spots for experienced surfers include Las Lagunas (‘Spew Pits’), a gnarly righthand barrel near Cotillo; and Lobos, a long right point that peels down the side of a volcano, a short ferry hop from Corralejo. Intermediate level surfers can find fun waves at some of the less demanding reefs like Rocky Point, as well as a selection of beach breaks like Glass Beach, Cotillo and Playa de Esquinzo.