Today, Stephanie Gilmore (AUS) and Filipe Toledo (BRA) won the 2022 World Surf League (WSL) Titles at the second-annual Rip Curl WSL Finals in dreamy four-to-six foot conditions at Lower Trestles in San Clemente, Calif. A historic day for Gilmore marked her eighth World Title, making her the winningest women’s surfer in the sport; while Toledo finally made his vision of being a World Champion a reality with his victory today. 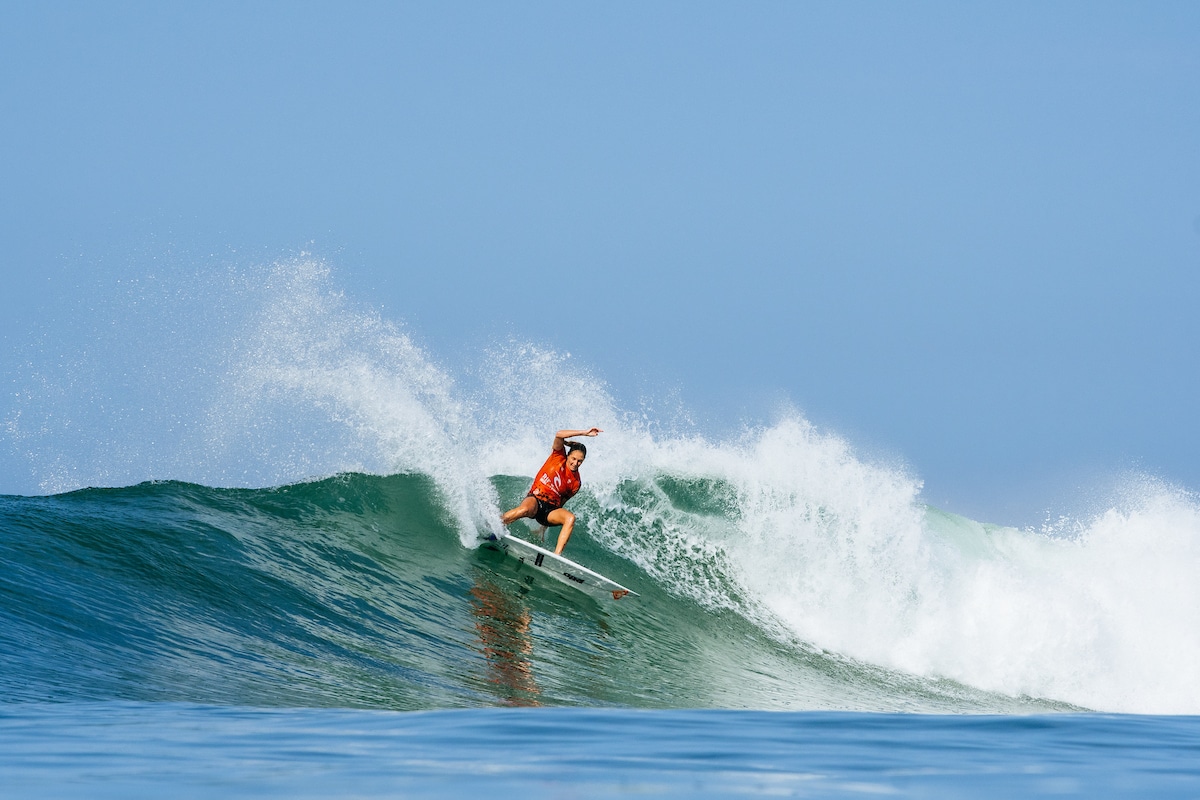 Domination and determination were the themes of the day as World No. 5 Gilmore made her way up from the bottom of the bracket to the top, taking out World No. 4 Brisa Hennessy (CRI), No. 3 Tatiana Weston-Webb (BRA), and No. 2 Johanne Defay (FRA) en route to the Title Match where she defeated World No. 1 Carissa Moore (HAW).

The women’s title race finished with a Title Match for the books, featuring two surfing legends, seven-time WSL Champion Gilmore and five-time WSL Champion Moore going head-to-head in a best-of-three World Title Showdown. Gilmore continued her momentum, winning the first of the three matches and leaving Moore in a do or die situation. In the Title Match 2, Gilmore proved to be unstoppable, picking the best waves and putting her trademark style on full display. In an emotional finish, Gilmore not only became the 2022 World Champion, but the greatest female surfer of all time with a record breaking eight World Titles.

“There really are not many words that can describe this feeling right now and that’s why I now really love this format. It puts the pressure on you, it puts you under the pump, can you do it, it’s truly incredible.” 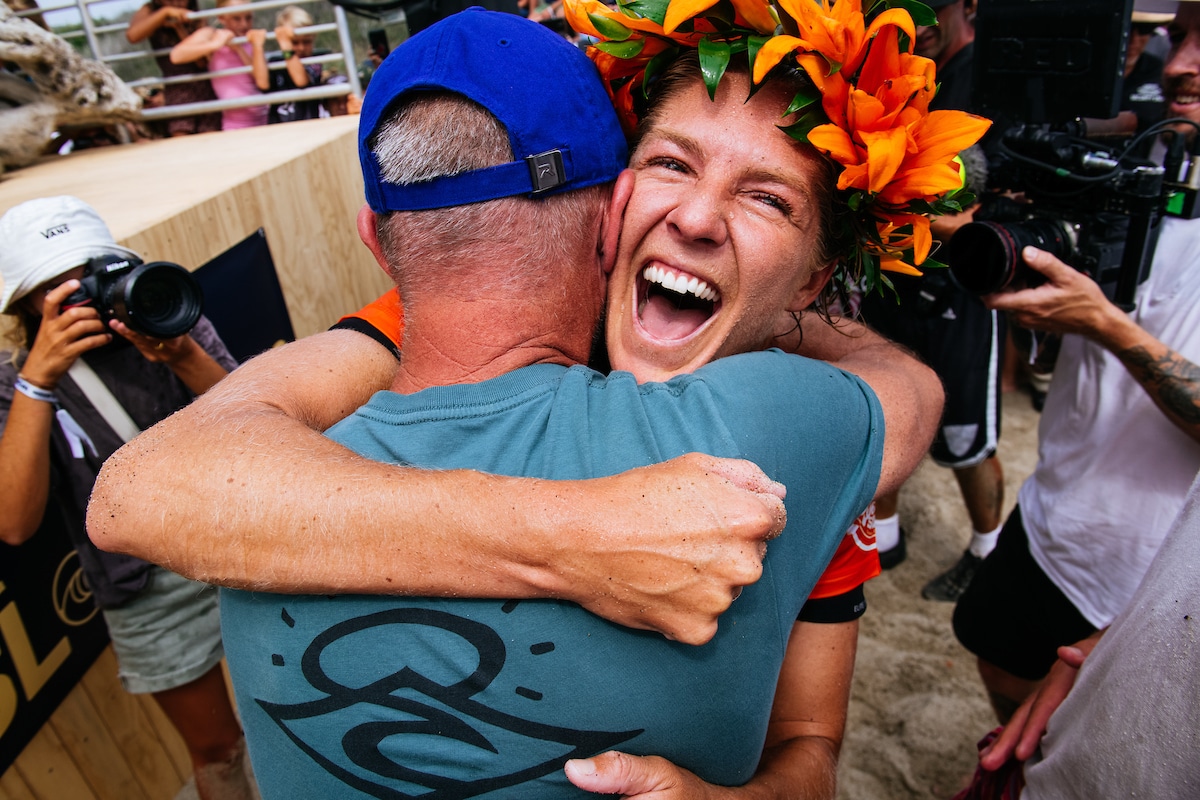 Gilmore, aged 34 from New South Wales, Australia, won her first World Title in her rookie season (2007) and became the first surfer (male or female) to accomplish such a feat. She went on to claim three more consecutive titles (2008, 2009, and 2010) followed by two more World Titles in 2012 and 2014. Gilmore has racked up an impressive eight Championship Tour victories during her career, second only to Kelly Slater (USA). In 2018, after a four year-gap, she clinched her record-tying seventh World Title (to equal Australian Layne Beachley), and went on to finish the 2019 CT season as World No. 4, qualifying for surfing’s Olympic debut in Tokyo. She was short of winning a medal at the Games and watched on as her rival Moore won both Gold and the World Title.

However, at the end of 2021 Gilmore again committed herself to the CT, vowing to win the 8th World Title that would, yet again, make history. Today, she has done just that, further cementing herself as one of surfing’s legends.

Gilmore’s style is listed by many as one of the best in the business. Her aggressive, elegant approach is grounded in genius precision and technical expertise that has set a new performance benchmark for surfing. She’s been a role model and inspiration to a generation of women who have become her greatest competitors, and she couldn’t be happier.

“I’m really proud that I was able to make it past Brisa (Hennessy), Tatiana (Weston-Webb), Johanne (Defay), all of the most incredible female surfers in the world,” said Gilmore. “And then to be able to make it all the way to the Final against Carissa, who in my mind, she’s the real world champ this year. I was out there thinking, if this happens, this is freaking cool because I’m out here against Carissa – the greatest of all time in my opinion.” 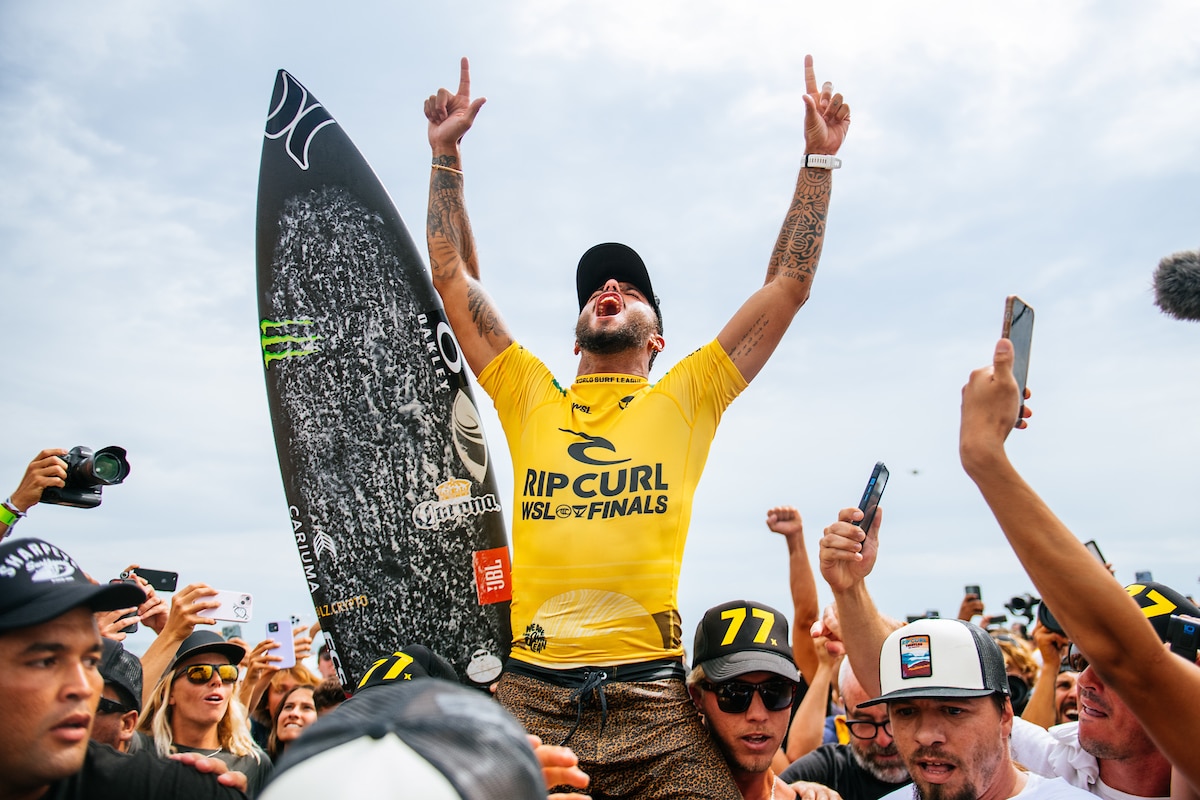 The day also belonged to 27-year-old, Ubatuba, Brazil competitor Toledo who has spent the previous nine years among the world’s best. Qualifying for the CT in 2013, Toledo’s career has accounted for some of the sport’s wildest highlights from his Perfect 10s across the globe to 13-career CT event victories, and now adding the prestigious World Title. 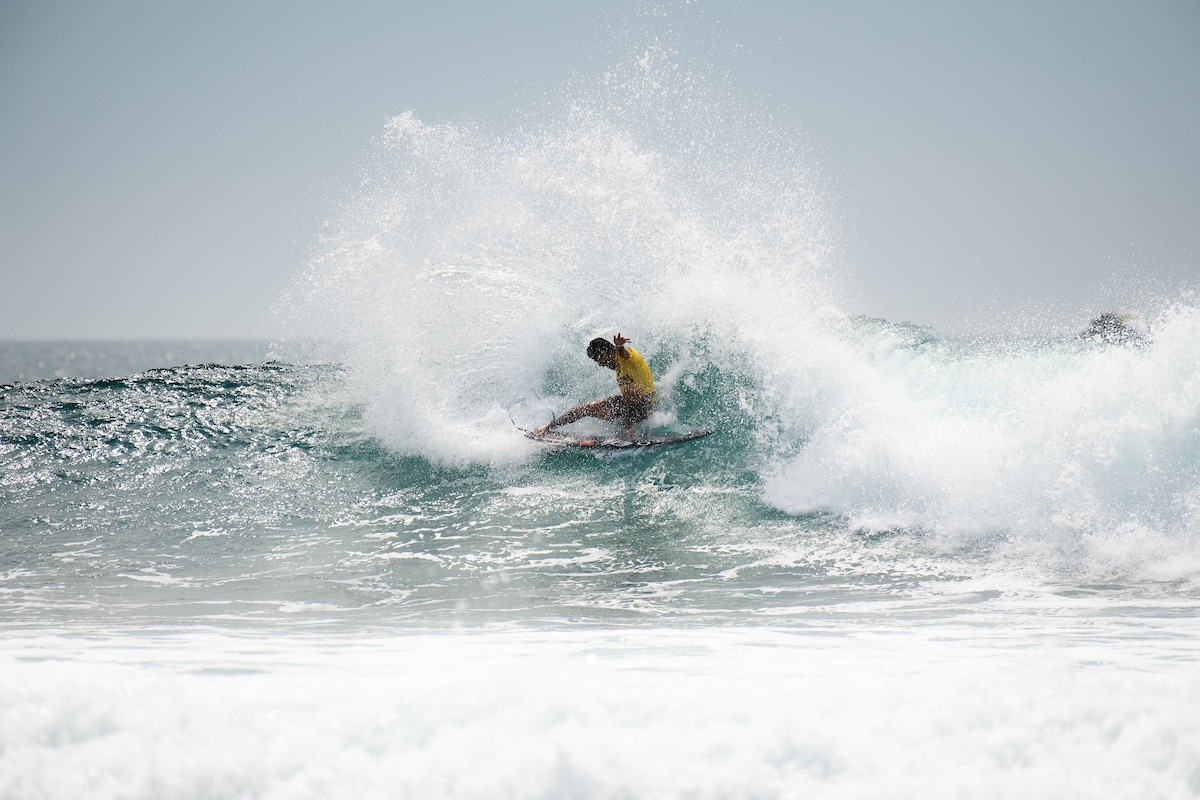 “It doesn’t get much better than this,” said Toledo. “This is for Brazil, for my family, and for you all here. First of all I want to thank Jesus. What he did for all my life and the last week, and the entire year. I kept calm and collected with help from the guy up there. Last night we had a moment with Pastor John, Terry, my wife and whole family and two words that he gave to us were peace and power. That’s what I had all day.”

The Brazilian’s commitment to his family and his craft is more apparent than ever. Traveling with them to each event and dominating the 2022 CT season with five Final appearances, including two wins, and flourishing in his Title Match against compatriot Ferreira.

“Whoever is chasing your dreams, it does pay off,” added Toledo. “It’s hard, you get tired, there’s a lot of ups and downs, and bad thoughts, but we did it. We did it.” 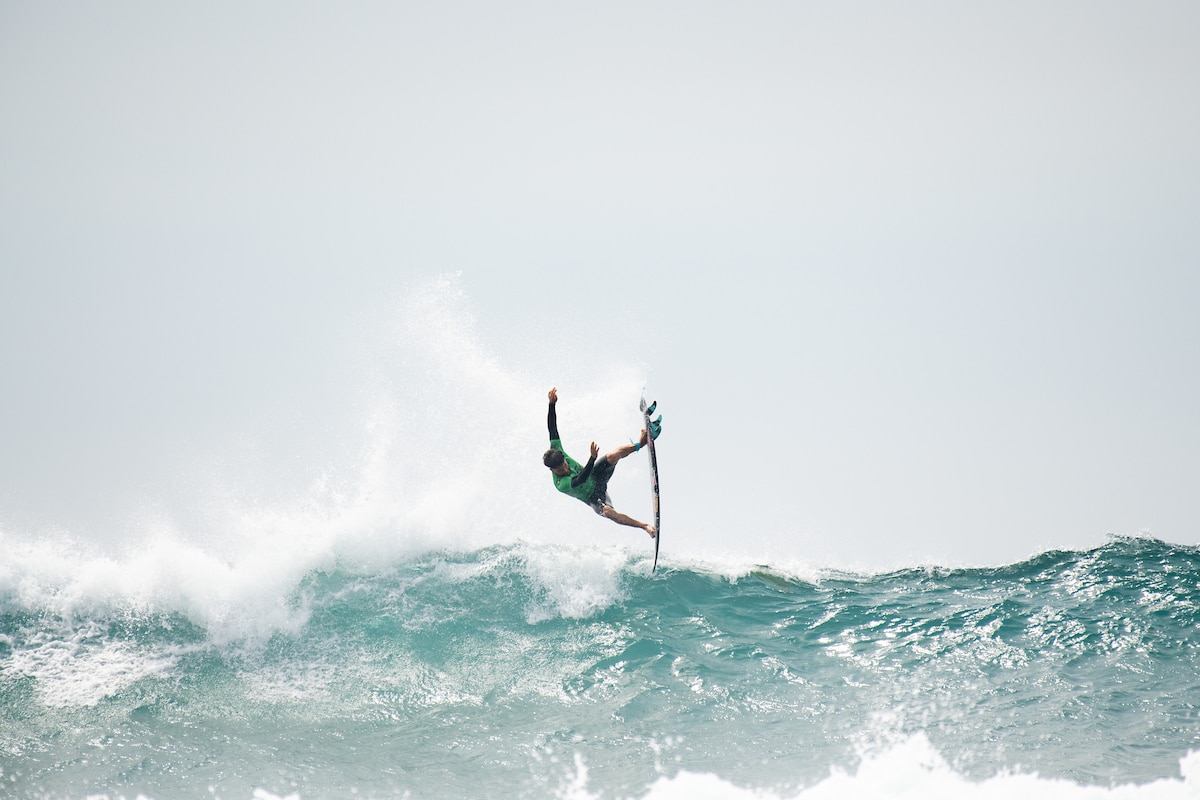 An immaculate run from World Title runner-up, Ferriera, witnessed the 2019 WSL Champion surge through each match with his signature flair and power. The Brazilian powerhouse started his Finals Day charge against World Title threat, Southern California’s own and Japanese representative, Kanoa Igarashi in men’s Match 1. Ferreira then took a commanding win over one of the CT’s best styles of Ethan Ewing (AUS) before moving into a heavily-anticipate Match 3 with World No. 2 Jack Robinson (AUS).

But, one of 2022’s standout performers, Robinson, couldn’t find the opportunities to fight back against Ferriera and the Brazilian gave everything he had in the Title Match, best two-of-three face-off with Toledo.

“It’s been incredible,” said Ferreira. “I’m just so thankful for the opportunity. I’ve been a regular in the Top 5 for the past few years and I just hope that I continue to be blessed, stay healthy and continue to evolve. I’m stoked for Filipe, he totally deserves this title and I’m glad that I made it to the Finals today.” 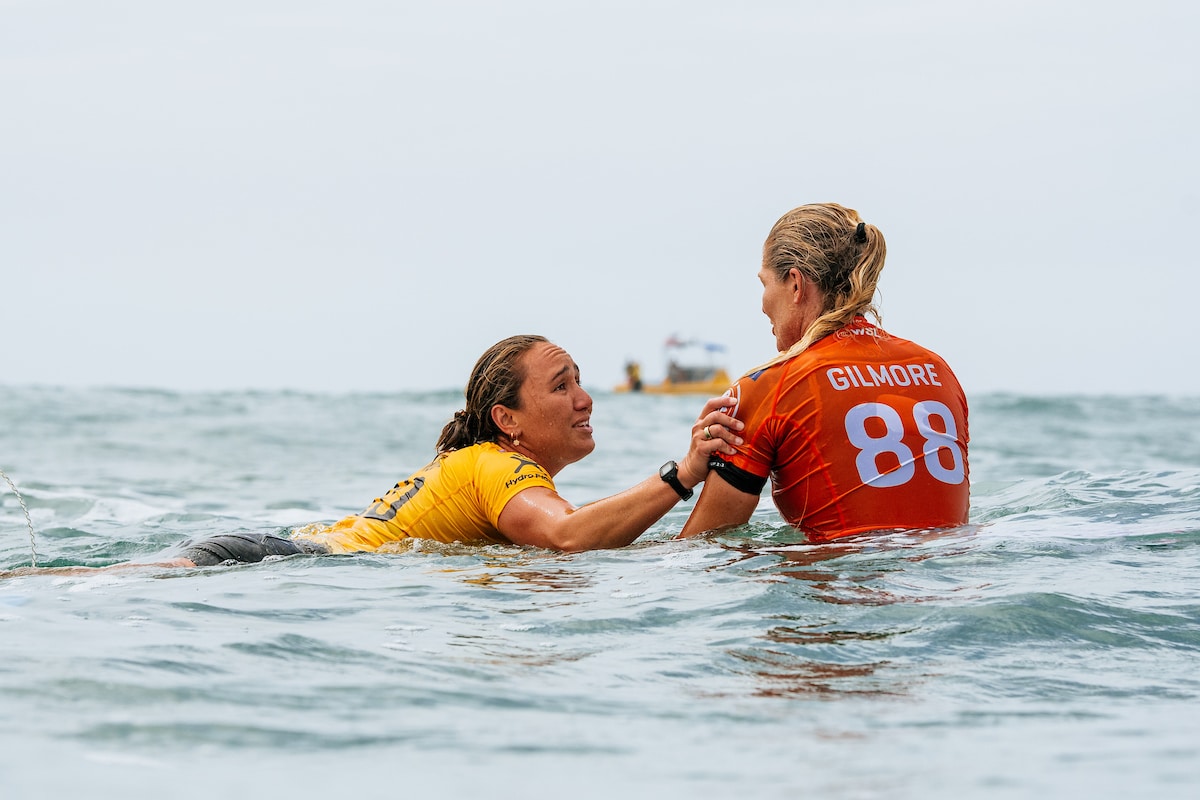 This time last year, it was glory for Moore (above) to the ring of being a five-time WSL Champion. But, one of the sport’s greatest couldn’t find her rhythm with the ocean in the Title Match as her attempts to overthrow Gilmore’s dominant form fell short each ride. It marked nothing short of an incredible season for the 28-year-old who earned four Finals appearance in the 2022 CT season and had a dominant lead in points head into the Rip Curl WSL Finals.

Now, Moore heads into the break to reflect on an incredible year and see what 2023 holds in store for the five-time WSL Champion.