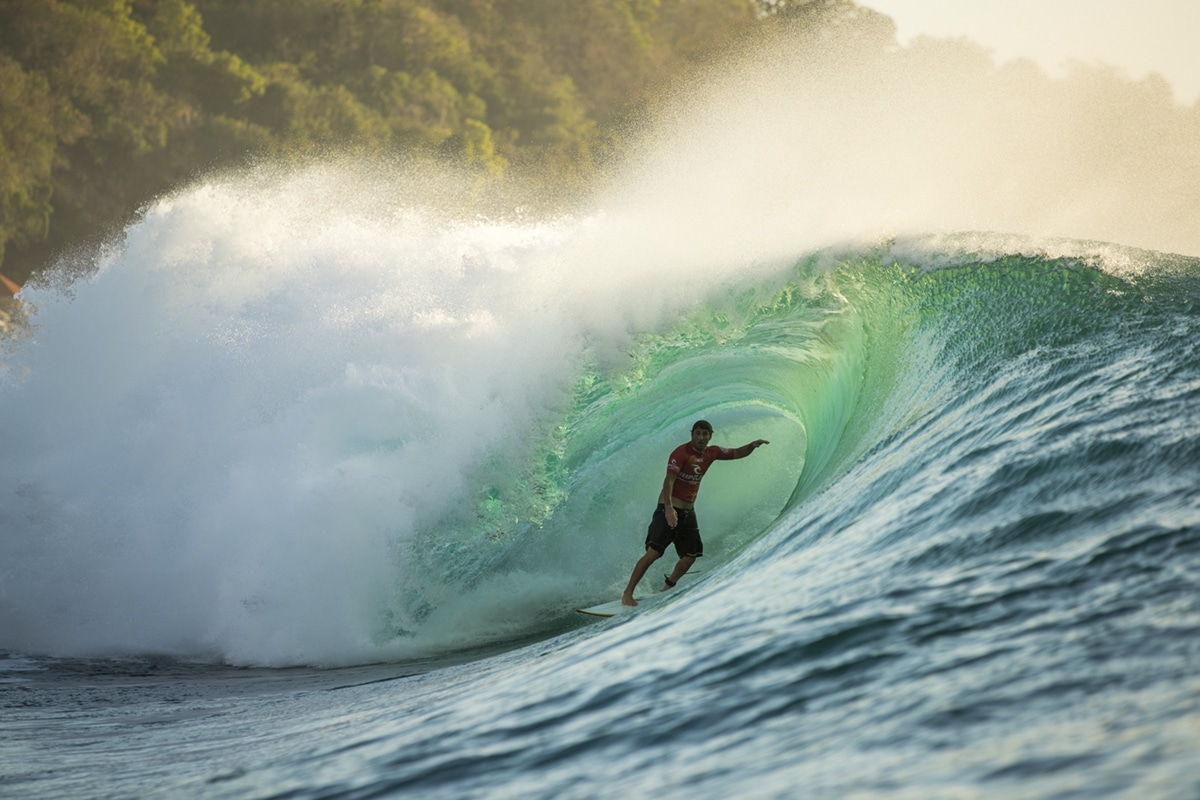 Hawaii’s Clay Marzo put on a show of world-class tube riding to emerge victorious at the 2022 Rip Curl Cup at Padang Padang, the premier barrel on Bali’s Bukit peninsula.

Marzo, who initially did not qualify for the semi-finals, ran into a bit of luck when the defending champion Benji Brand had to withdraw due to injury. Marzo was next in line to advance and was given another opportunity. After narrowly missing the title with a runner-up finish at the 2019 edition, Marzo fully seized his second chance, blazing a trail of redemption through the semi-finals and final.

“It was epic out there,” said Marzo. “I am stoked to get those barrels, some of the best waves ever.”

Marzo added, “The lightbulb went on when I found out I was still in the event. The pressure was off [after I thought I was out] and I found my groove. Benji told me to go get it!”.

Fresh off a gold medal performance at the ISA World Juniors and a dreamy trip to the Mentawai islands, the 15-year-old phenom Erin Brooks of Hawaii continued to take the surf world by storm and made history on multiple fronts. 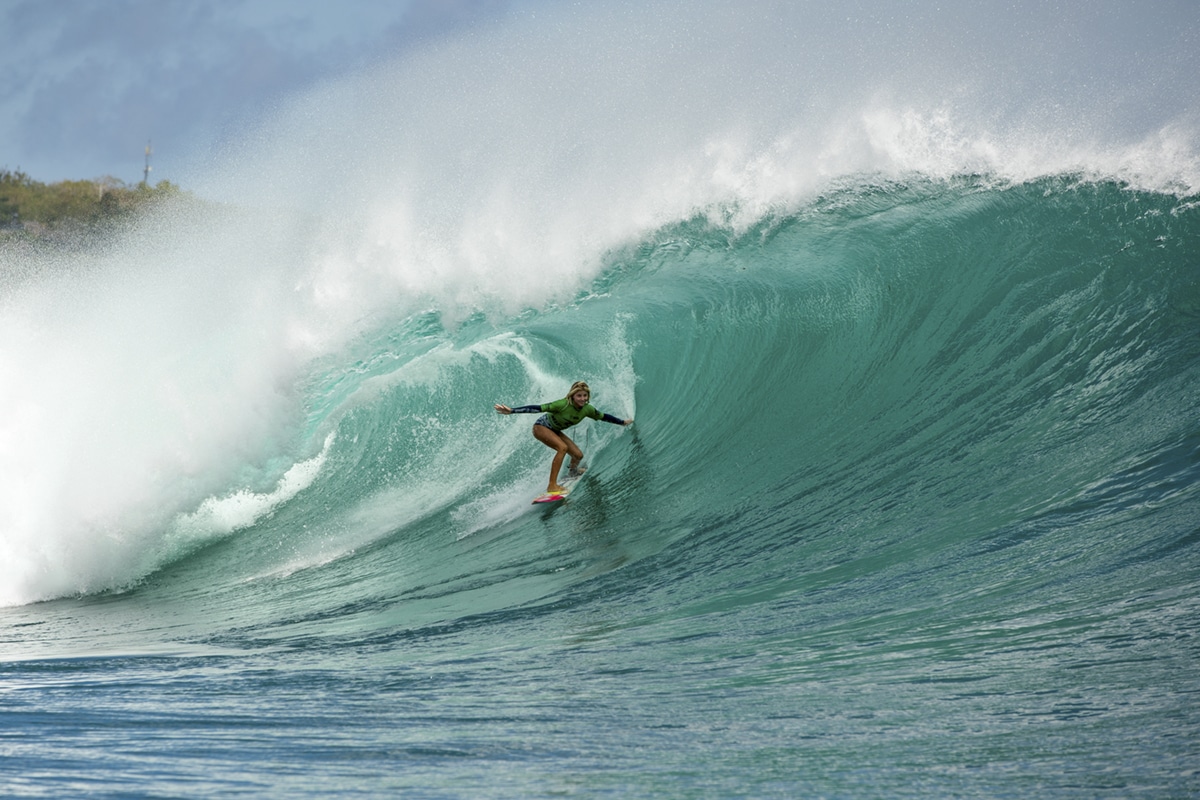 In an open field that included all men aside from herself, Brooks was the youngest woman to compete in the event. She advanced through to the final where she earned fourth place, solidifying a spot as one of the premier tube riders on the planet.

Additionally, she took the title for the inaugural women’s super heat where four top female competitors took to Padang Padang to put the growth of women’s surfing on display.

“All the guys and girls were doing so great,” said Brooks. “It was cool to compete against both. The waves were firing today and I am so happy with how I performed. The local girls have been so nice to me and they’ve been charging out here too.”

Brooks continued, “I am going to keep doing my best and keep pushing women’s surfing.”

The Indonesian duo of Mega Semadhi and Mega Artana made the home country proud, earning second and third place in the final, respectively. Both showed their knowledge and expertise of the wave, giving the heat leader Marzo a run for his money. 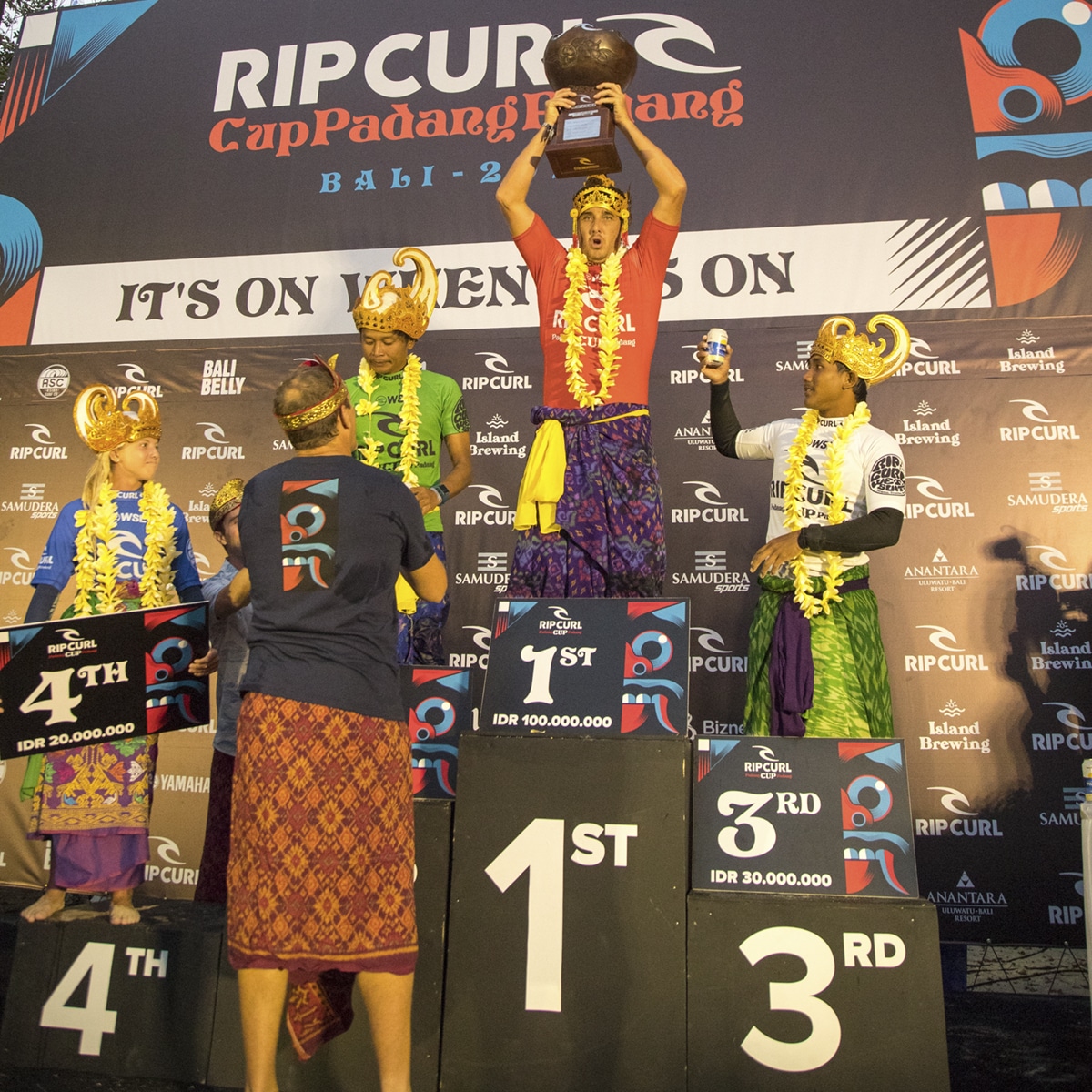 Artana beamed with joy as he spoke about his performance.

“It’s amazing to surf on this platform,” said Artana. “This event is big-time, especially for Indonesians. Padang is like the Indonesian version of Pipe. If you want to be big with media and sponsors, you have to do it at Padang.”

“I want to say from the bottom of my heart a massive thanks to the local community, to all the local surfers that let us do this each year and share the beach,” said President Director of Rip Curl Indonesia James Hendy.

“I think for the local community, as well as traveling surfers, just to have this event run again is so special,” Hendy continued. “It’s such a great chance for the world and local surf community to see the best tube riders in the world surf against their local hometown heroes. It’s truly something unique and that’s why we do the event.”

Hendy concluded, “Having a women’s heat at a wave of consequence like this, a serious wave, is huge for the sport. There are so many women pushing the boundaries of comfort now – charging in heavy waves. It’s empowering for girls to see that they can do it in these types of conditions.”

The 16th edition of the Rip Curl Cup kicked off under clear skies and epic conditions on Thursday morning on the Bukit peninsula of Bali. It was a momentous occasion for the local Indonesian surfing community as the first time the event has run since 2019 due to the global pandemic. 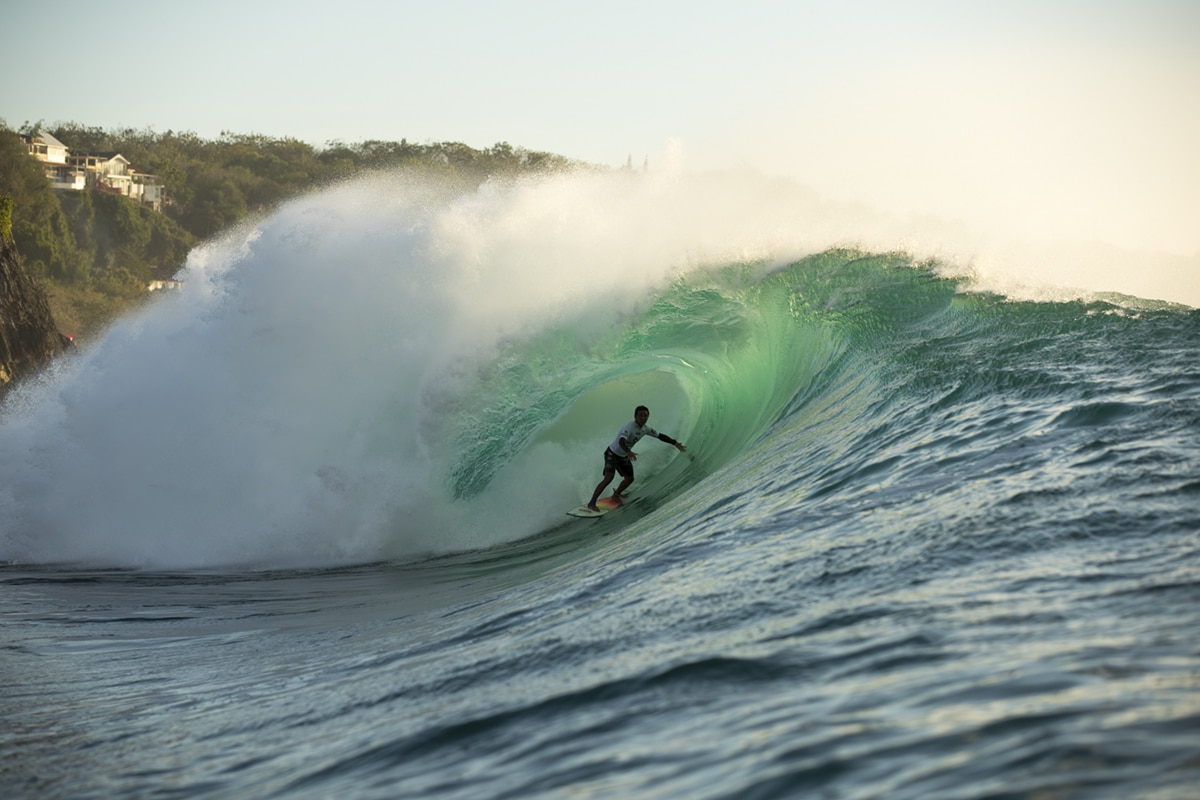 The competition featured a new round-robin format where each of the 16 competitors surfed two heats, earning points based on their heat placings that determined the top 8 surfers to advance to the single elimination semi-finals rounds.

Despite not advancing through the first two rounds, USA’s Luke Swanson put on a show in an action-packed heat, notching the highest single wave score of the round-robin stage with a 9.7. Swanson lined up a technical double tube that caused the crowd on the beach to erupt in applause.

“I didn’t want to snake Nic Von Rupp the first time I’ve ever surfed against him, so I let him take the first wave of the set,” said Swanson. “I heard them screaming [for Nic] while I was on my wave behind him, and sure enough, he got a 9.33 and I got a 9.7.”

The women’s super heat followed, a new addition to the event that gave some of the best young and upcoming female surfers a chance to display their talent on a global stage at a world-class wave.

Marzo and Brooks sailed through the first semi-final. Brooks wasn’t content with her top 8 finish, continuing her historic run with the best wave of the heat. Brooks notched an excellent 8-point grinding tube ride to book her ticket to the final. 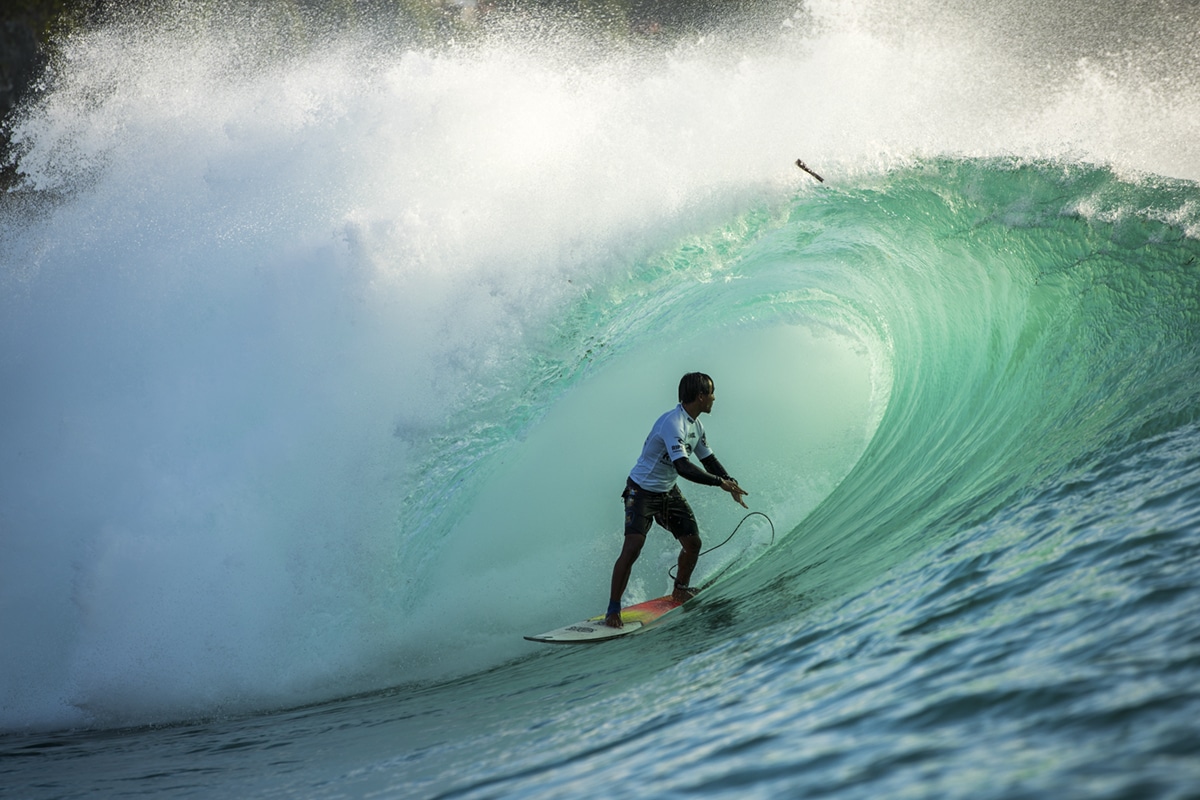 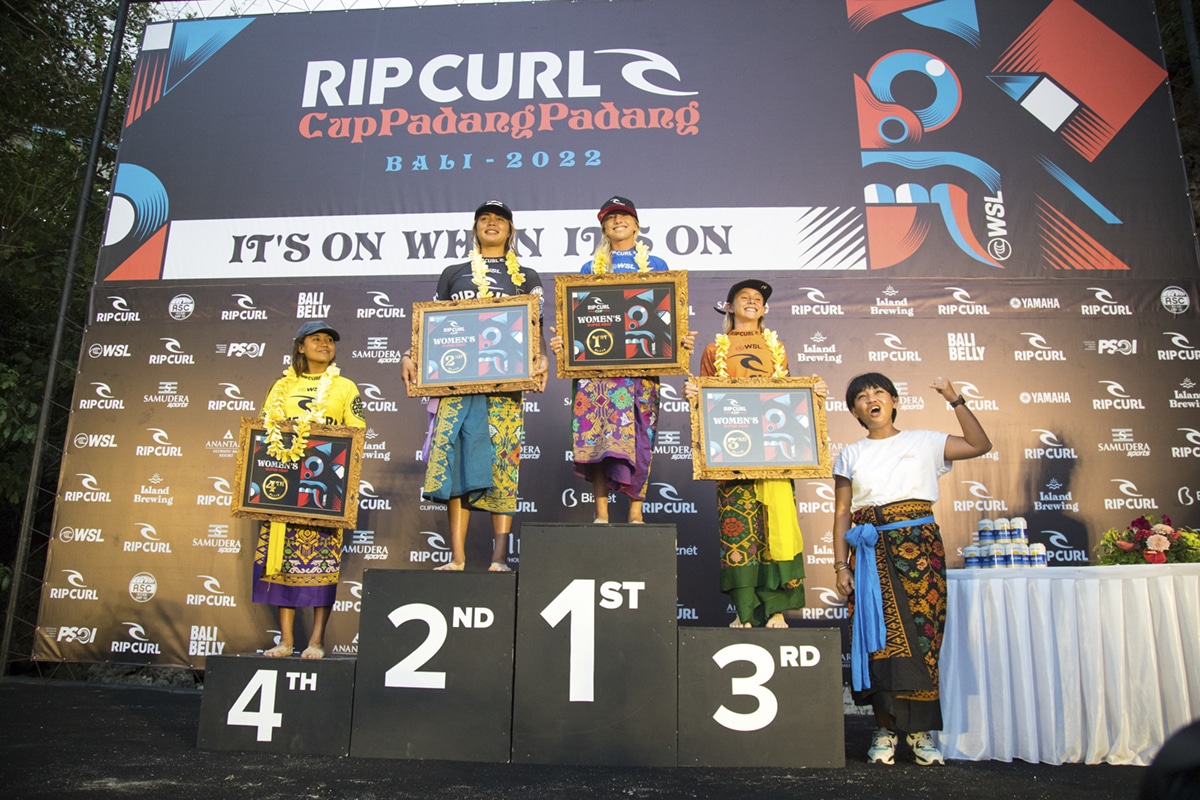 Brooks and Marzo both capitalized on a mistake from Portugal’s Nic von Rupp. Needing only a 2.56 to advance and in possession of priority, von Rupp let a wave with scoring potential slide by in the dying minutes, which Marzo turned into a 5.17 to improve his heat total.

The second semi-final turned into a flurry of barrels, with Samadhi and Artana earning excellent wave scores to better USA’s Ian Crane who had an excellent ride of his own.

The final was an Indonesia and Hawaiian affair, matching up the Hawaiians, Marzo and Brooks, against the locals, Semadhi and Artana.

Marzo showed cool nerves and his patience paid off in the final. When he saw a wave he liked, he positioned himself in an impossibly long tube ride to earn the first and only perfect 10-point ride of the event. Not content with a perfect ride, Marzo then continued to make it look easy with two more excellent rides of 8.87 and 8.33 en route to his maiden title at the event.

As Marzo put the field in a combo position, the other three competitors packed impressive tubes of their own to attempt to break the combo. Semadhi earned a pair of 7’s, while Artana nabbed a 9-point ride. Brooks continued to surf well beyond her years and pack tubes to cap off her historic performance. Still, none were able to match Marzo’s brilliance.

The 2022 Rip Curl Cup Padang Padang webcast is available for replay at ripcurl.com and at worldsurfleague.com. Fans can also visit the Rip Curl website to check news, photos, and video updates from Bali. 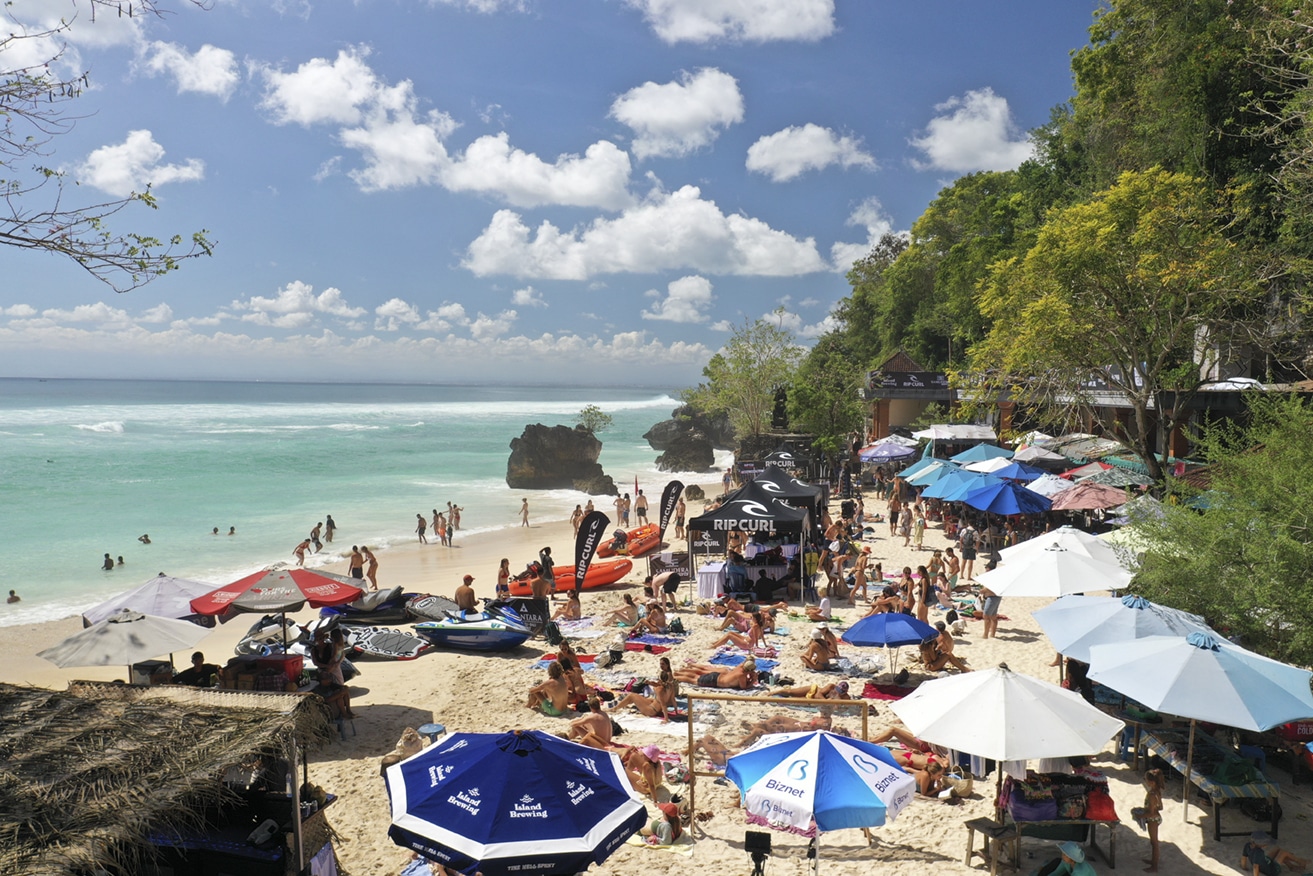