The Merriam-Webster dictionary defines the word ‘surfable’ as, quite simply, ‘being suitable for surfing’. Here at the BLU, our much more empirical definition is to chuck the frothy groms in to see if they can catch waves, before deciding whether to bin the whole thing and go to the pub. Thanks to the youthful dedication of the U16 Cadets, and in spite of all the laws of physics, man and the heavens and a blind refusal to accept defeat, we had us a Porthmeor Longboard Classic 2022!

The weather was scorchio, the surf a much less exuberant 1ft-with-an-occasional-thigh-high-set, and a lively cross-shore wind. But we made a contest of it. Boy, did we make a contest of it. The aforementioned U16s got straight to it, with Sylvie Puddiphatt and Kaz Phillips taking out their respective semi-finals in some style and Kaz squeaking past Sylvie to win in the final by a mere 0.1 points. A small entry, but a high quality one for sure. 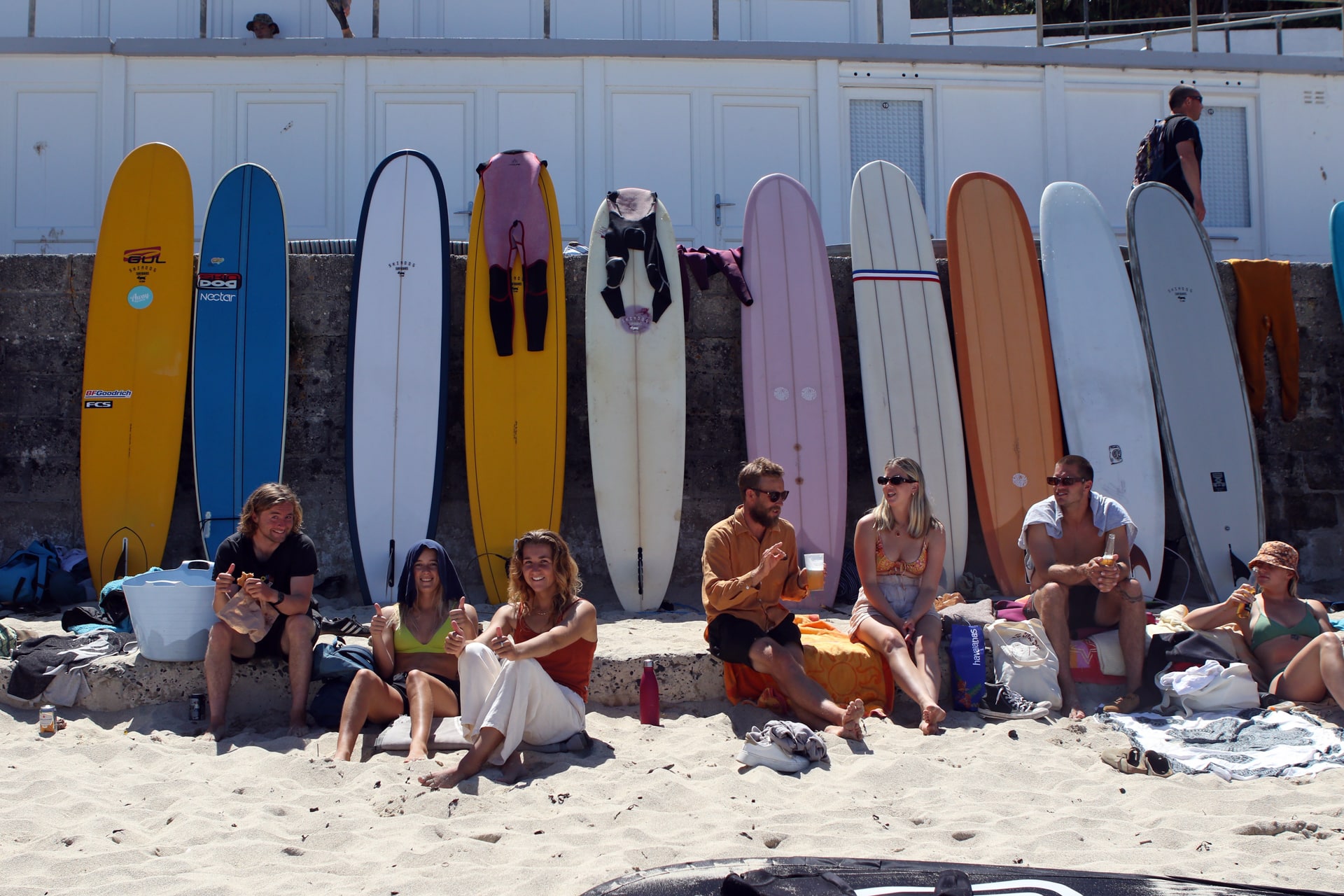 The Single Fin produced a MUCH healthier number of competitors. Possibly wave size had something to do with that, but enough utterly baseless conjecture from me. The big points in the early rounds came courtesy of a brace of nose rides, spinners and drop-knees from Elliot Dudley, Sam Bleakley, Mike Lay, Andy Teasdale, Izzy Henshall (fresh from the Duct Tape SA) and repatriated expat Sam Crookshanks (semi-fresh from Straya)
In the two U18 divisions, it was another disappointingly small field. With a couple of the groms on international duties maybe it was to be expected, but it’s starting to look like a pattern that the free and massively discounted entries for the junior divisions does not seem to be fixing. Something for the committee to ponder in the off season, for sure. Despite that, the quality of the competition was sublime. In the U18 Girls final, Lola Bleakley, Sylvie Puddiphatt and Mali Harbour traded waves like their lives depended on it, and building on her recent win at Porthcawl it was Lola and her goofyfoot magic who carried the day. The U18 Boys was another straight final and this time mega-frother Ted Pearson – seemingly a little off his game earlier in the U16s – utterly smashed it with textbook drop knee turns and confident nose riding to set up a possible mouth-watering winner-takes-all finale against Blake Jones at Fistral later in the year. Great to welcome Tobias Gwennap to his first final, too. 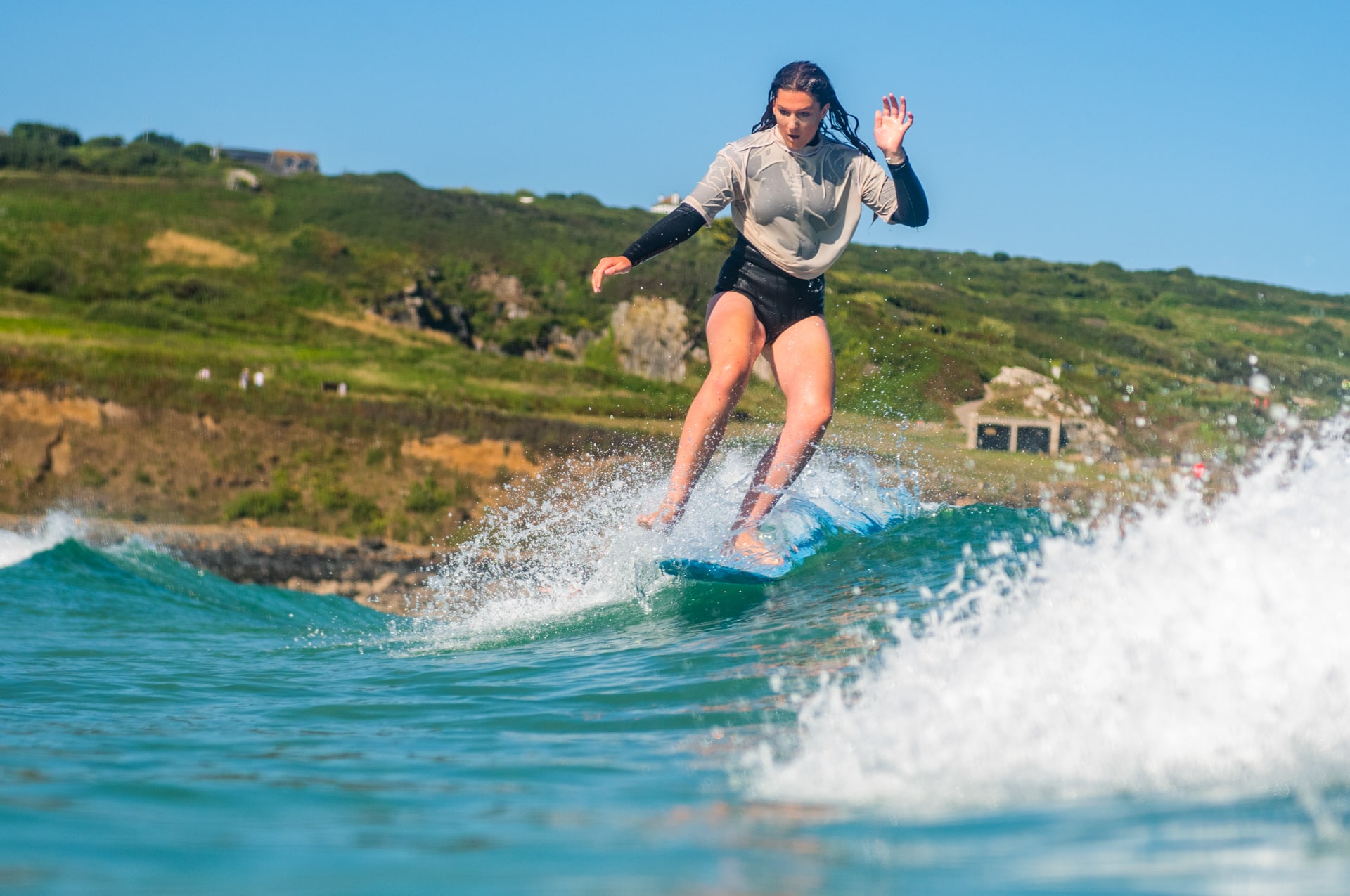 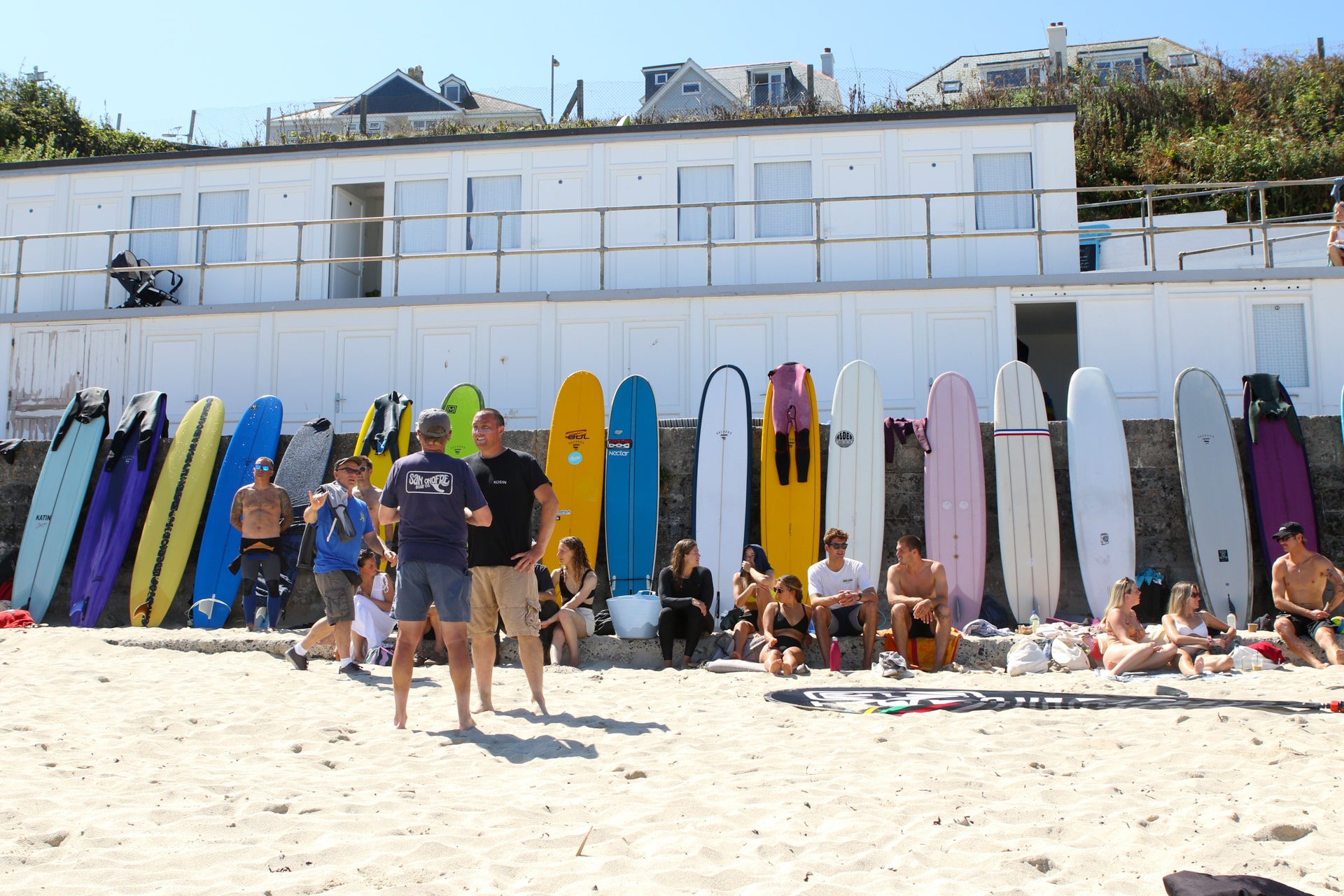 The second day gave us similar – dare I say ever-so-slightly bigger – size surf but with a much more useful light offshore breeze to smooth out the wrinkles. Armed with the knowledge that the high tide was likely to kill the surf, and with the impending arrival of one of the biggest holiday crowds of the year so far, the race was well and truly on. 15 minute heats and finals, no stopping for lunch, toilet breaks or catastrophes (man-made or natural). We MAY have paused briefly for a cheeky pasty – we’re not totally without standards, you know.
First up to bat, the Men’s Open and big hitters in the shape of Sam Bleakley, Elliot Dudley, Mike Lay, Ben Howey, Jack Unsworth (sporting a very natty hat) and Ashley Braunton. It’s fair to say that what Ash really, REALLY wants for an early Christmas present is a 6ft swell for the last BLU event at Fistral (#bigboyproblems). He still managed to pull off the second highest score of the 1/4 finals before falling at the semi-final stage. 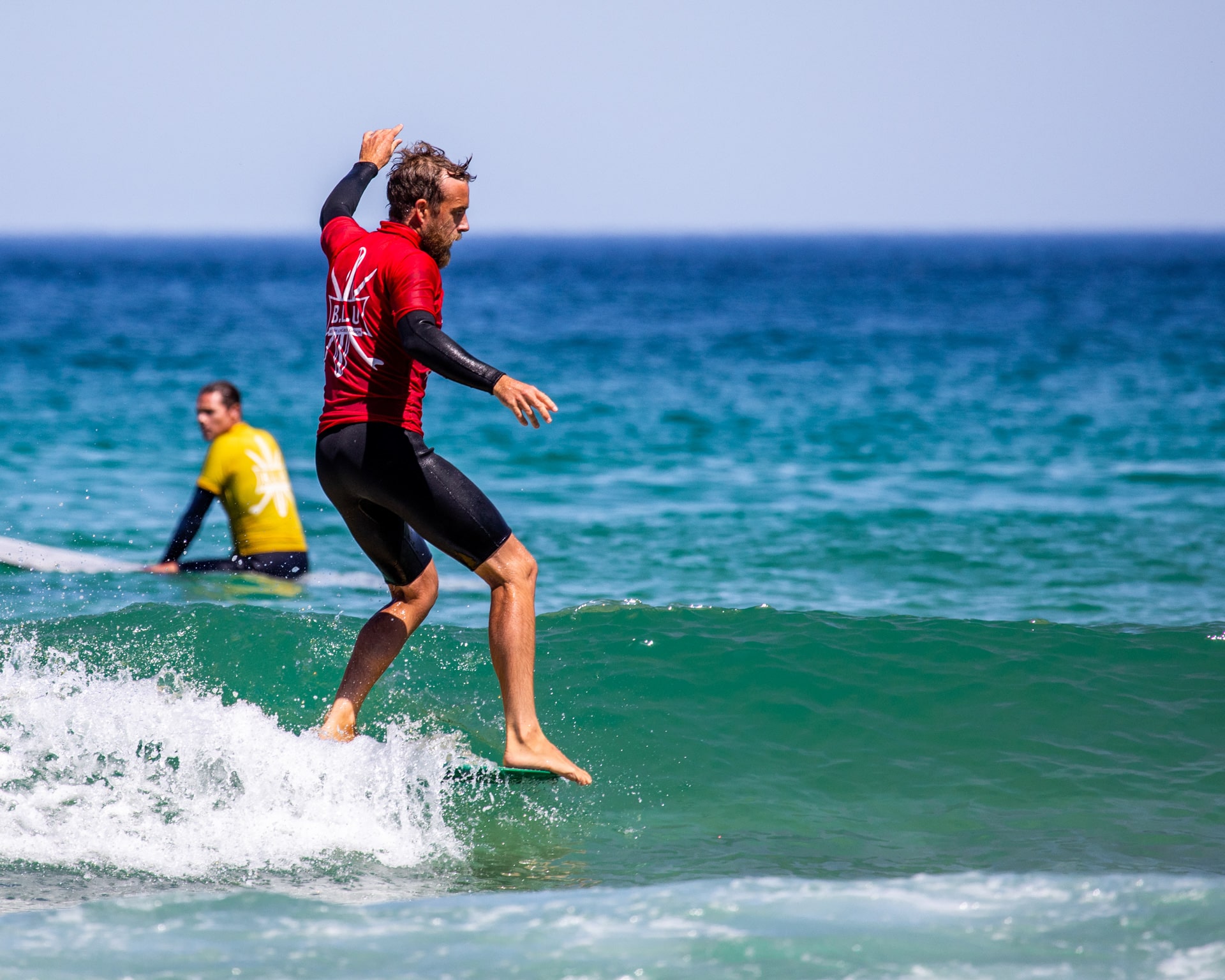 The Grandmasters final, once they’d all stopped going on about how things were better in the old days when everything cost a penny, was a game of cat and mouse between current champ Adam Chell, Alan Reed, indestructible Surfbot Colin Bright and Nick Lethbridge. The tide managed to push the swell off a lovely little bank and into a small lagoon of non-breaking despair, which made for some very tactical exchanges. Riding what can best be described as a gigantic neon orange Cadillac of a longboard, it was Alan ‘Still Punk To The Core’ Reed who prevailed with a late charge to take the honours back to the Isle of Wight, assuming Toby the German Shepard didn’t rag the honours to pieces on the van ride back. Geddon, Toby. Good boy. 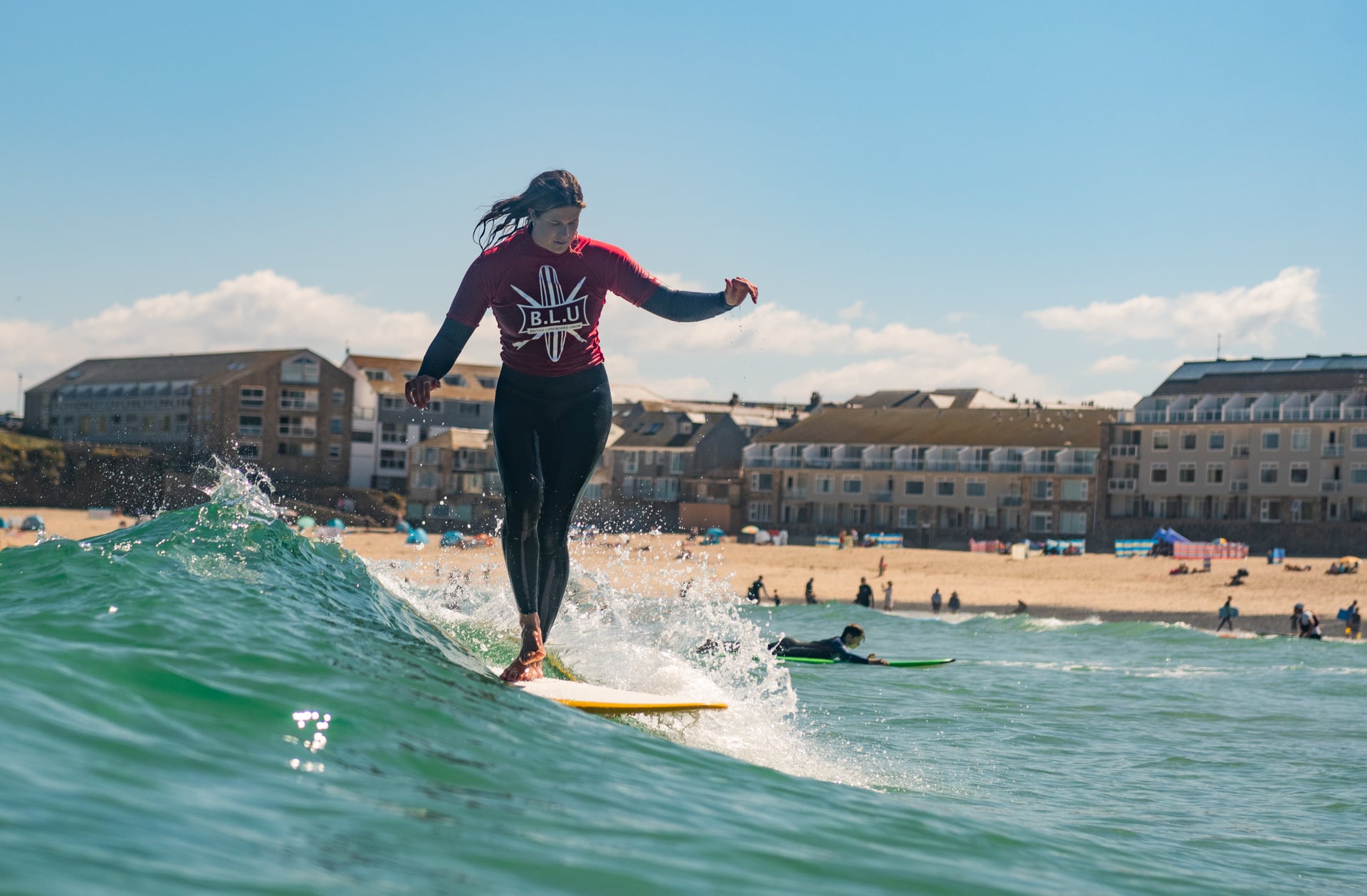 The Women’s Open is rapidly becoming one of the most competitive divisions on the tour, and with the average age of the entrants being in the late teens / early 20s it’s shaping up to be an exciting prospect for the next few years. It was also great to see some new faces at St Ives, and long may that continue. The final, however, consisted of some very familiar names and pitted current champion Emily Currie against Mali Harbour, Izzy Henshall and Lola Bleakley – a thrilling two regular/two goofy contest. The conditions seemed less suited to Emily’s more powerful style, but with a very clinical and professional performance she found and gracefully obliterated the longer and more consistent right-handers in one of the best small wave heats I’ve seen her surf, and thoroughly deserved the win. 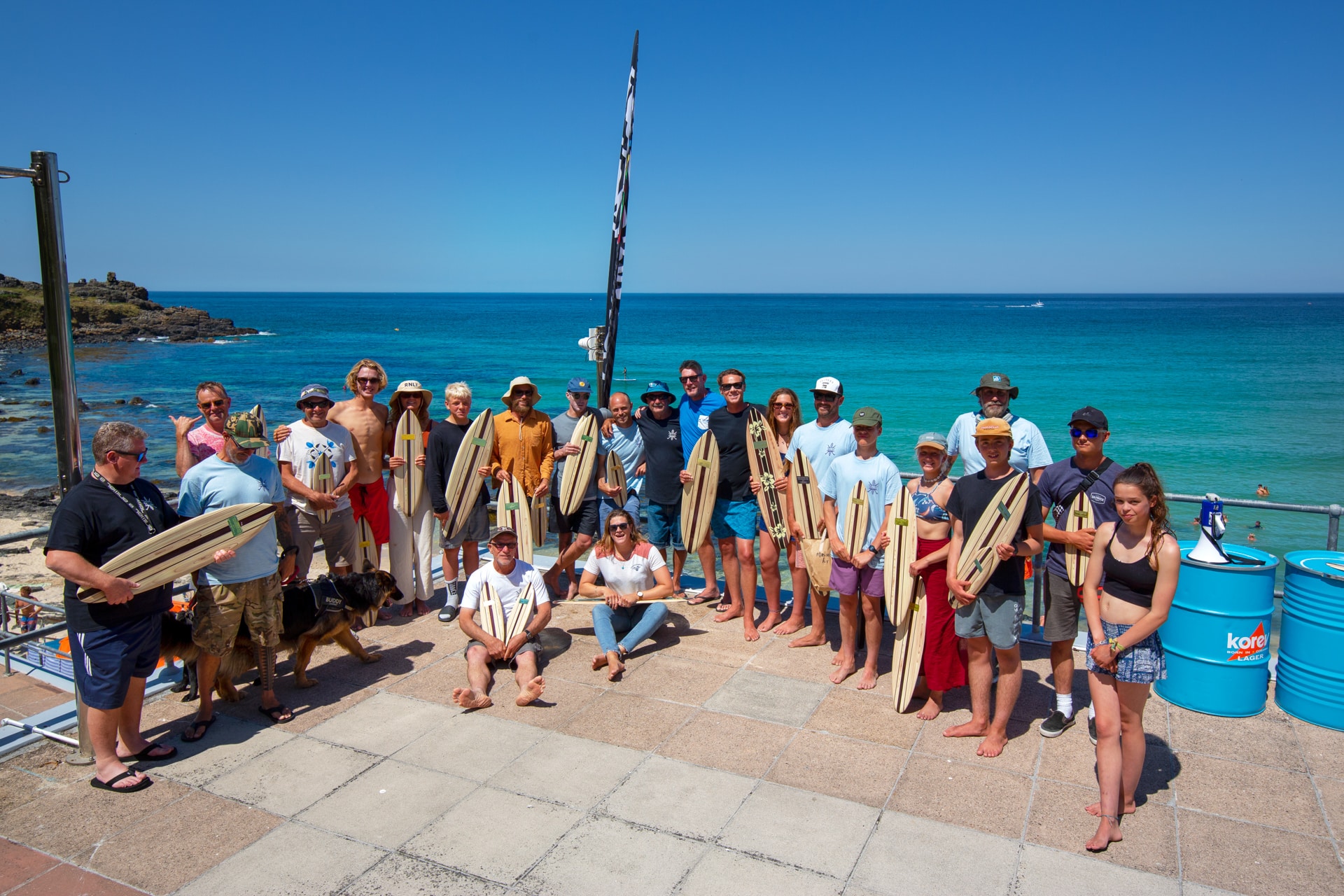 With the Single Fin tapering down to the sharp end, and the brave and bold cast to the wayside by the bucket load, it was left for Elliot Dudley, Sam Bleakley, last year’s winner Mike Lay and Sam Crookshanks to battle for the final honours. In a desperately close finish between himself and Elliot, Mike found one of the most manoeuvre-filled waves of the weekend to put the result beyond any doubt.
Time for the Masters. This is another division which, and with no disrespect to the surfers who have gone before, is going to get mightily interesting in the next few years now that Chris Thomson and Sam Bleakley have arrived as the first wave of a number of excellent Open surfers who are approaching the big four-oh. Sam set his stall out early in the semi-finals with a bone-crushing 13.17, almost doubling the score of every other surfer in the round. Destiny, however, has an interesting way of interjecting in proceedings, and as the old saying goes ‘cometh the hour, cometh the man’. The man in question being Chris Thomson, and the outcome being a win by 0.16 over Sam to claim the overall Masters title after two events. Solid stuff from Chris, and it gives him the chance to put a gold-leaf covered cherry on the cake at Fistral in the autumn.

To round things off, and in a genuine race to the death between the contest and the tide, the Men’s Open final saw the Sam Bleakley take the win in some style over Elliot Dudley, Ben Howey and a slightly wave-weary (and sunburnt) looking Mike Lay to give him a 1-2-3 finish across the weekend. Given the number of waves he rode across 3 divisions, I am mildly in perplexed awe of Sam’s fitness. I suspect he actually ran home to Gwenver and went in for another 3 hour session….

Fantastic support as always from our wonderful sponsors – Tregenna Castle, St Ives BID and O&E, and a huge thanks to Saints Boardriders for hosting us at their amazing clubhouse and feeding and watering the judges and support staff. A massive shout out also to the off duty lifeguards who gave it their all to keep the holiday crowd out of the contest area – a difficult task and much appreciated.
A special thank you from me and video jockey Chris Levi to Ben Hartley (@benhartley8) and Nathan Benham (@dawnpatrolphotography) for the additional media coverage, watershooting and drone work. Legends, the pair of you.

We look forward to doing this all again – hopefully with a bit more swell – at The Stable, Fistral Longboard Classic later in the year. Thanks again, Porthmeor. You were a true sweetheart.