Seven-time World Champion Stephanie Gilmore (AUS) is through to the Semifinals where she will face Caroline Marks (USA) at the Surf City El Salvador Pro Presented by Corona. Photo: WSL / Diz

The Surf City El Salvador Pro Presented by Corona, Stop No. 7 on the World Surf League (WSL) 2022 Championship Tour (CT), is ready for Finals Day after a big day of competition at Punta Roca. In three-to-four foot waves, the Surf City El Salvador Pro completed men’s Elimination Round 2, men’s Round of 16, and the women’s and men’s Quarterfinals. Only eight surfers remain in the competition and will set their sights on the event win when Finals Day starts. The WSL Tours and Competition team has indicated a likely finish for the event tomorrow, and the next call will be at 6:45 a.m. CST for a possible 7:05 a.m. start. 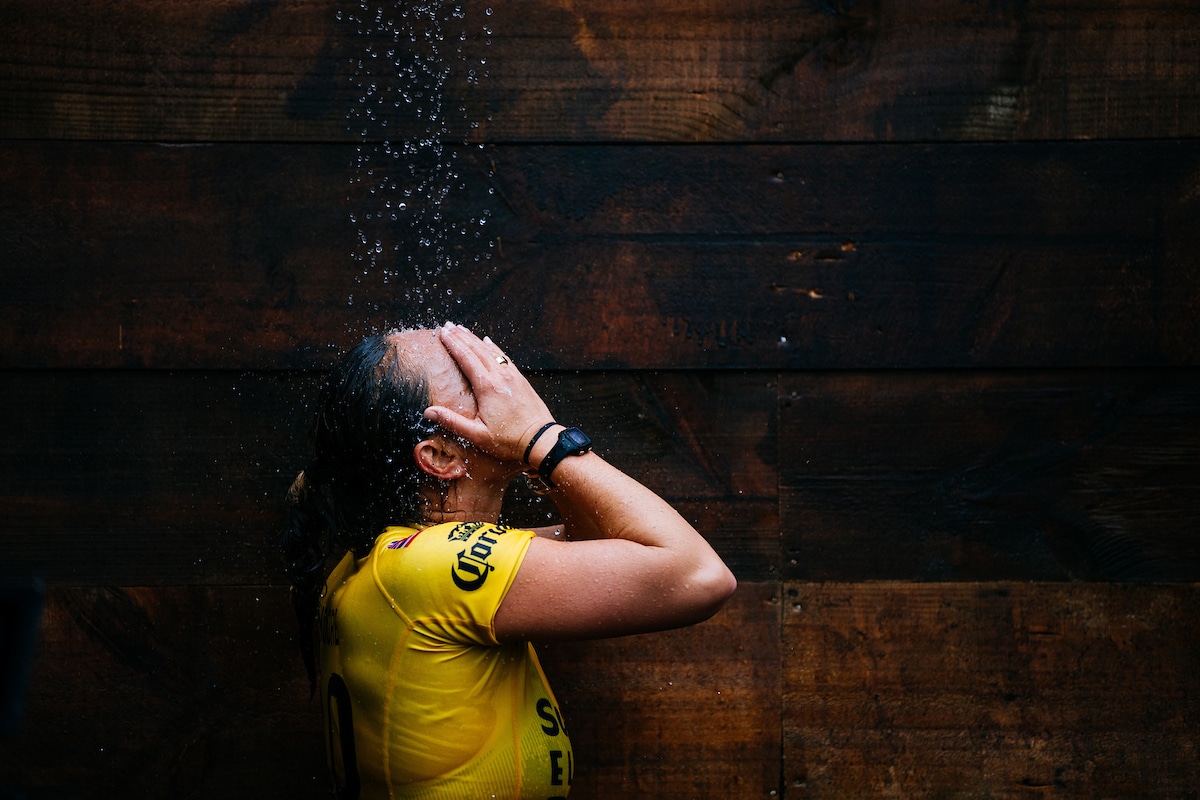 Carissa Moore (HAW, above), the five-time WSL Champion and current CT rankings leader, is out of the competition after a big loss to Caroline Marks (USA), the 2022 WSL season wildcard. Marks has been out of competition for six events following the Billabong Pro Pipeline and returned to competition here in El Salvador. Marks previously took down World No. 2 Brisa Hennessy (CRI)

“I am so pumped,” said Marks. “I was just laughing with her in the locker room and saying that she always beats me. We’ve had a lot of heats together and I’ve won a few times but she’s definitely beaten me a lot more. Carissa has probably been my biggest inspiration growing up and she’s been the one I’ve looked up to the most, so to have a heat with her is pretty special. I feel like I have nothing to lose this year so I am just grateful to be here.” 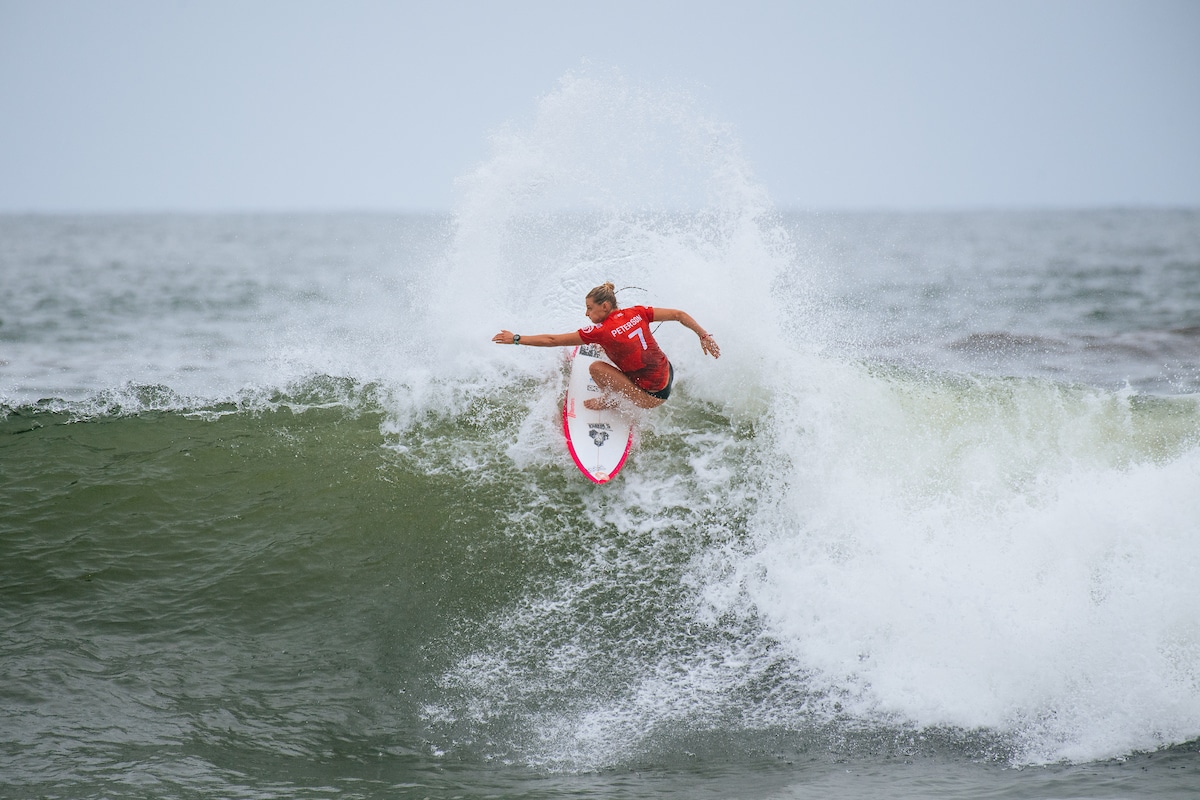 World No. 6 Peterson and No. 7 Gilmore Advance Closer to WSL Final 5 Breakthrough
Lakey Peterson (USA above) currently sits at World No. 6 and within striking distance of the WSL Final 5, where the top five placing surfers will compete in the one-day Rip Curl WSL Finals for the World Title. Peterson faced fellow Californian Courtney Conlogue (USA) in Quarterfinal 2. Under pressure in the dying minutes of the heat, Peterson needed a 7.06 (out of a possible 10) to advance to the Semifinals. Peterson was able to find one last opportunity in the last 15 seconds of the heat, scoring a 7.40 and the victory.

“It was nice to get that opportunity,” said Peterson. “It is the worst to lose a heat feeling like you didn’t get the opportunity. I definitely did a lot of things wrong in that heat. I wasn’t sure if I got the score and I hadn’t seen Courtney’s waves from the front so I didn’t know where the scale was at. I’ve had a rough few events and I’ve been getting really frustrated with myself, so just to have a couple things go my way there, I’m really lucky. Great job to Courtney. That’s always heartbreaking and she’s such a great competitor and surfer, and I have so much respect for her.

Stephanie Gilmore (AUS) sits one place below Peterson on the CT rankings and her win today puts her in a strong position to battle her way into the WSL Final 5. After defeating Isabella Nichols (AUS) in the Quarterfinals, Gilmore secured her second Semifinal berth of the season and could make up lost ground here at the Surf City El Salvador Pro. With recent victories at locations similar to Punta Roca, Gilmore is a favorite to take the event win. She will face Marks in the Semifinals, which is looking incredibly likely to run tomorrow.

Johanne Defay (FRA) was first to punch into the Quarterfinals after eliminating injury replacement Sally Fitzgibbons (AUS) from the draw. Fitzgibbons took the air for a few attempts but failed the land the winning heat total to defeat Defay’s 15.60 (out of a possible 20) two-wave total. Defay will now face Peterson in the Semifinals. 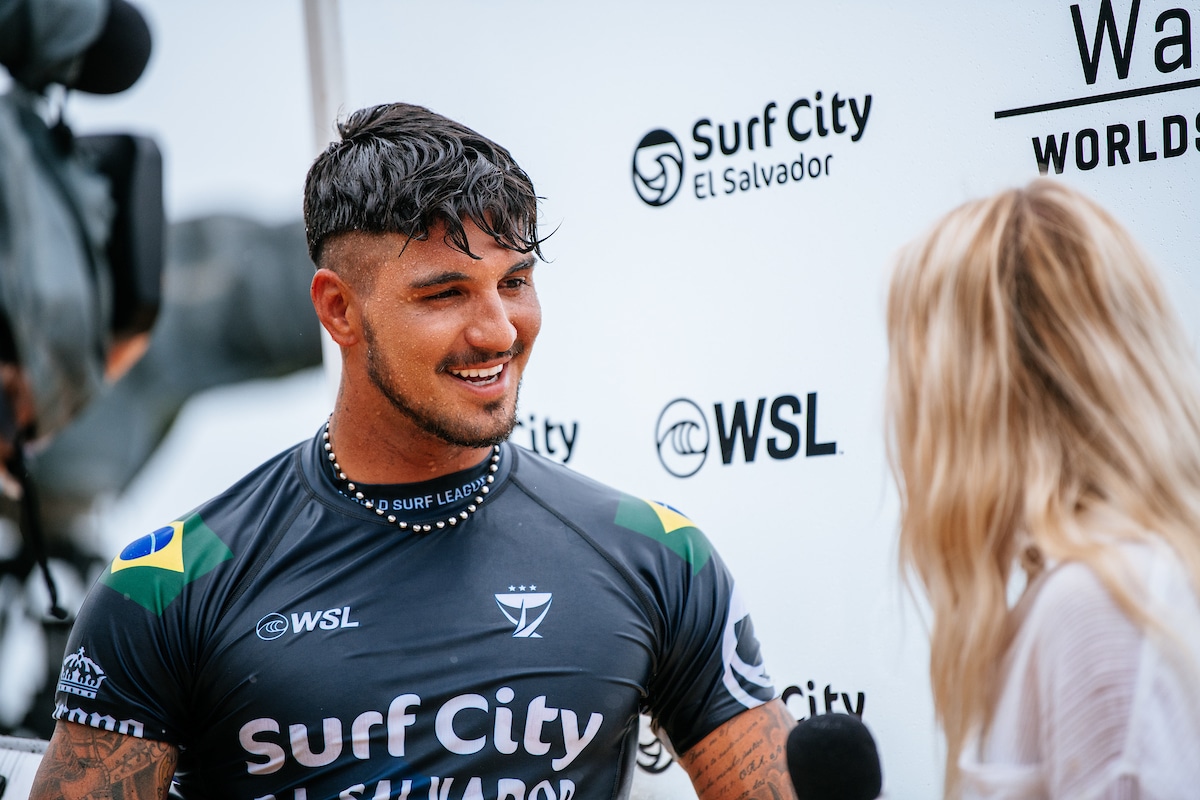 Colapinto, Medina, Toledo and Ferreira Through to Semfiinals
Gabriel Medina (BRA above), three-time WSL Champion and 2022 WSL season wildcard, is on a mission: make the WSL Final 5 despite missing the first five events of the CT season. For most competitors, this goal would seem out of reach, but a victory here for Medina could do his World Title campaign wonders. His win in the Quarterfinals over World No. 2 Jack Robinson (AUS) already gives him a boost after a 5th place finish at the Quiksilver Pro G-Land. Medina will face Quarterfinal standout Griffin Colapinto (USA) in the Semifinals.

“A win is always good and I’ll take it,” said Medina. “It’s an important result for me so let’s keep going. Jack (Robinson) is a good surfer and he proves it so much. It’s been amazing to watch these guys, especially him because we kind of grew up together, so it’s good to see him up there pushing everyone. To have a heat against him is always good, he got me in G-Land, and it feels good to get him here.” 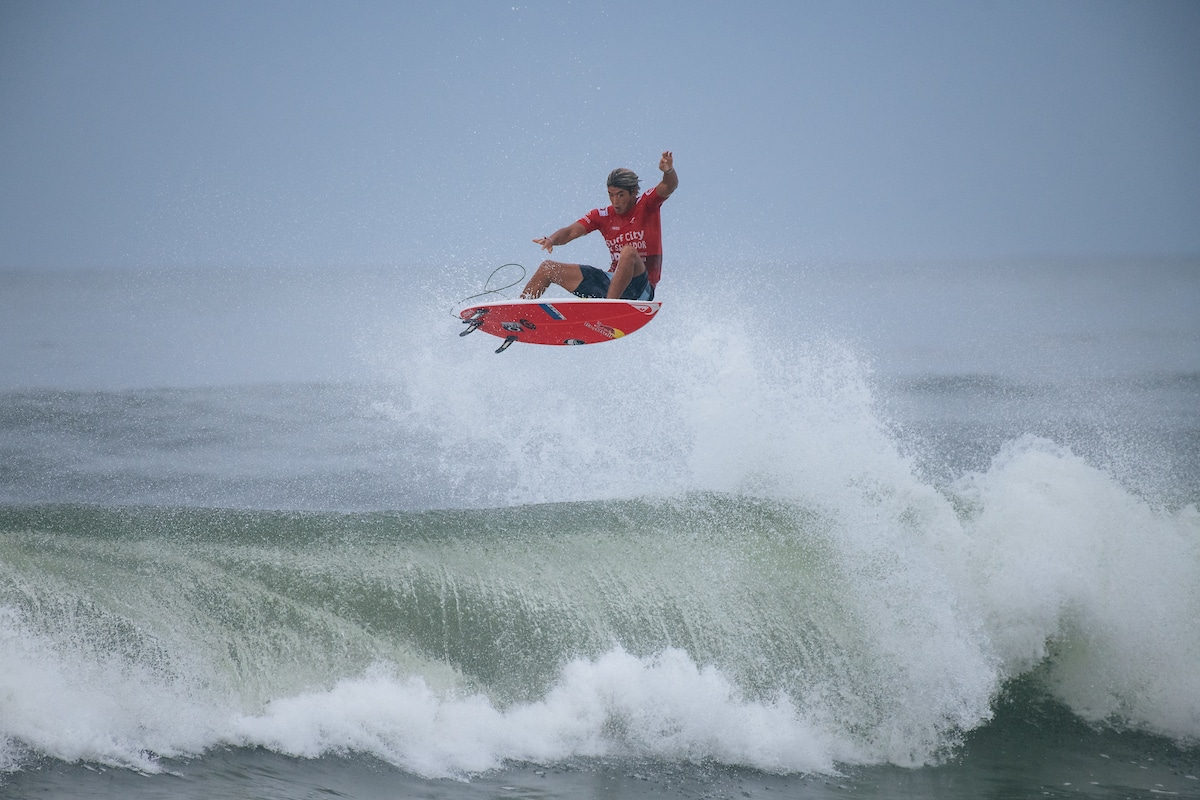 A big heat unfolded between Colapinto and Kanoa Igarashi (JPN above) as the two went gave a stunning performance, accruing three excellent scores amongst them, in which Colapinto’s impeccable 17.60 heat total emerged victorious. A near-perfect 9.10 regained the San Clemente competitor his lead after Igarashi fought back just moments before with an 8.87 of his own. Igarashi’s opportunity in the dying moments did not meet the 8.74 requirement.

“It’s pretty crazy to surf a heat against Kanoa (Igarashi) in pristine conditions,” said Colapinto. “It’s kind of a dream because he and I have been rivals since we were young, and we’ve gone back and forth a lot. He’s got my number, so that was a really special heat for me and I’m sure it was special for him. I’m just glad we both were able to get big scores and get after it.” 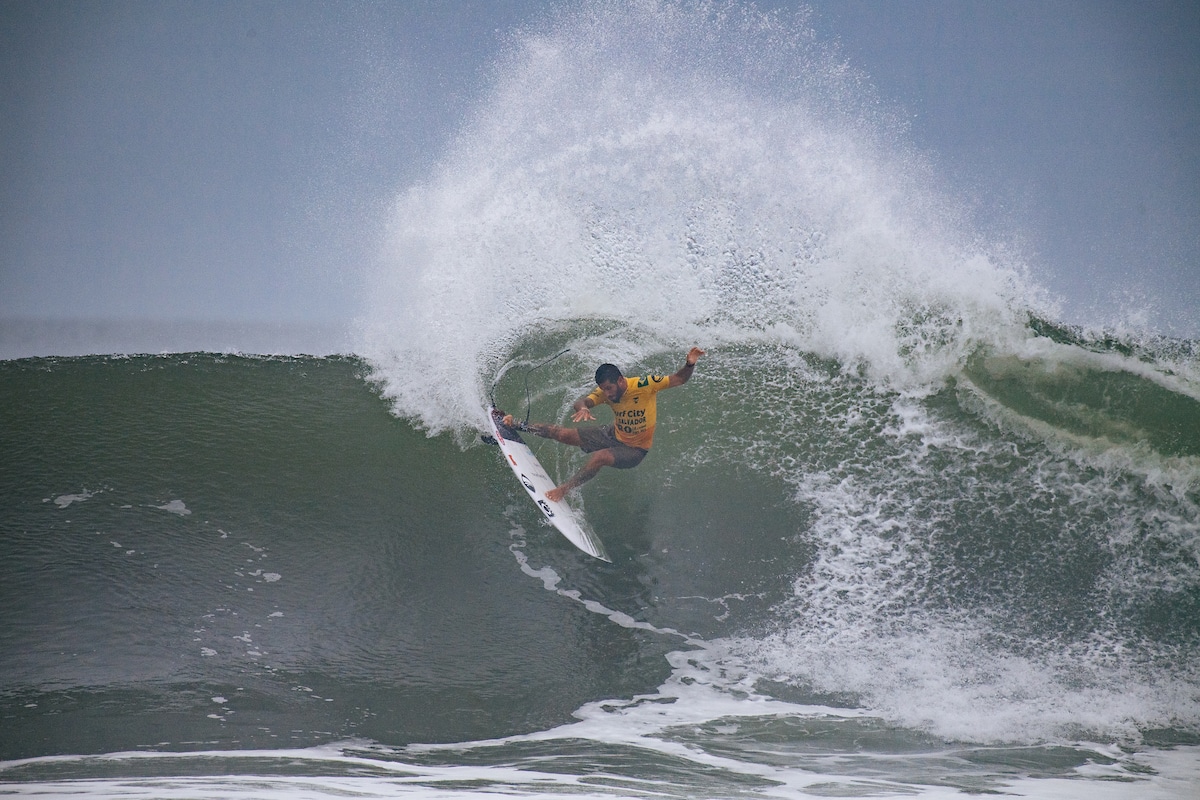 World No. 1 Filipe Toledo (BRA above) continues his incredible run through 2022 with a fourth Semifinal appearance after taking down rookie threat Callum Robson (AUS) in dominating fashion, leaving the Australian in need of two scores to equal his 16.67 heat total. Immediately following that performance, 2019 WSL Champion Italo Ferreira (BRA) was put on the ropes by an in-form, current World No. 5 Ethan Ewing (AUS) heading into the final minutes before posting an 8.67 to retake the lead and make his way into the Semifinals.

Trials winner Perez’s run in his home country of El Salvador ended early with a loss to Ethan Ewing (AUS) in the first elimination heat of the day. Ewing started the heat strong with a 6.50 (out of a possible 10) on his first wave and backed that up with a 5.50. Perez had a decent answer back with a 4.33, but wasn’t able to find the quality of waves that would allow him to do his best surfing. Perez leaves his first CT event in equal 17th place.