Jack Robinson (AUS) and Johanne Defay (FRA) claimed victory today at the Quiksilver/ROXY Pro G-Land, Stop No. 6 on the World Surf League (WSL) 2022 Championship Tour (CT). After a week of waiting, Finals Day was greeted with the best conditions of the window, with G-Land putting on picturesque, four-to-five foot surf groomed by perfect offshore winds. Event standouts Defay and Robinson capitalised on the long-walling waves at G-Land, showing full commitment on each and every turn. 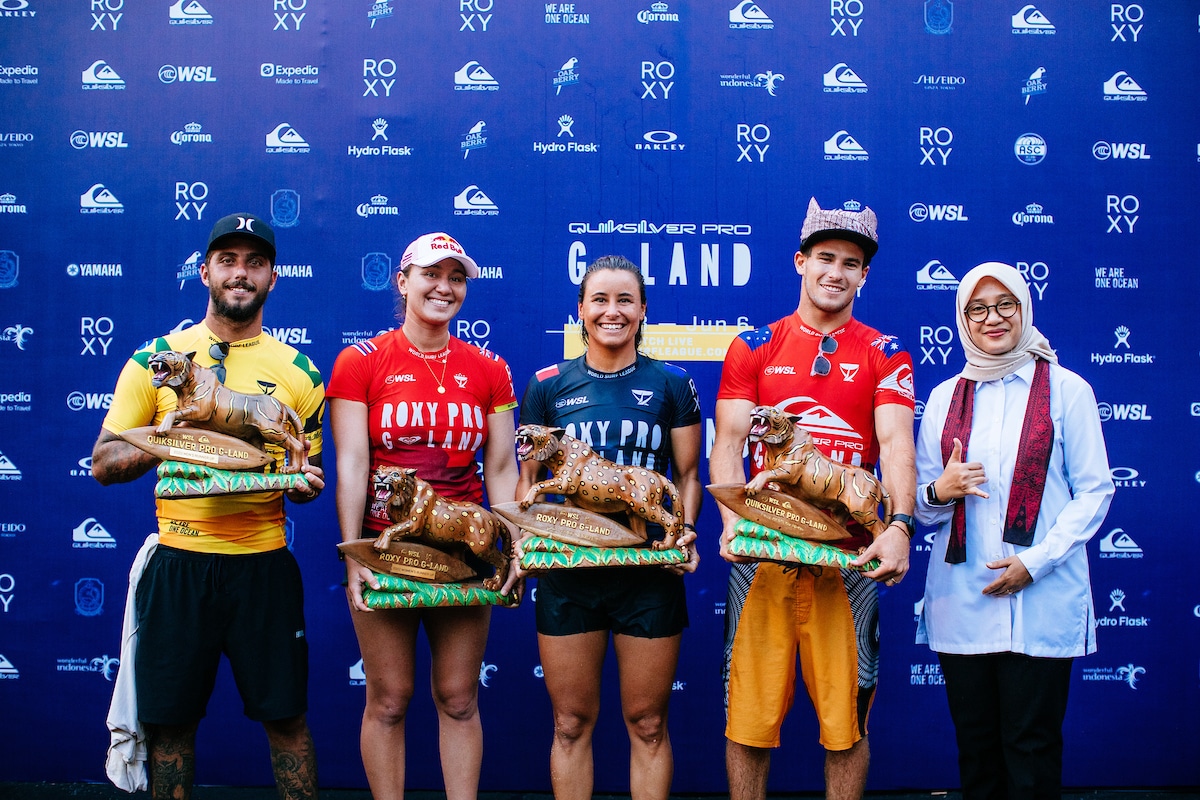 Defay Wins Roxy Pro G-Land, Climbs to Third on World Rankings
With wins at locations including Cloudbreak and Uluwatu, France’s Johanne Defay came into the first-ever Roxy Pro G-Land as a solid favourite. After stumbling in the Opening Round, Defay refocused and got her campaign back on track and never looked like turning back, particularly on Finals Day when she overcame seven-time WSL Champion Stephanie Gilmore (AUS) and event favourite Bronte Macaulay (AUS) to find herself in her eighth CT Final, this time against reigning five-time WSL Champion Carissa Moore (HAW). Defay saved her best performance for last, posting a two-wave combination of 14.00 (out of a possible 20) to overcome Moore and claim her fifth CT victory and move to third on the Rankings.

”It feels surreal and amazing to win this event,” said Defay. “It has been a long week here in the jungle and the waves at G-Land are so perfect today that it is really special for me to take the win and defeating Carissa Moore is always so hard. She came at me late in the Final and it was really close. Coming from Reunion, the Indian Ocean is my home ocean and I have had a few victories here in Indonesia. As the first woman to win here at G-Land, it feels so special at such an amazing location, it’s great.” 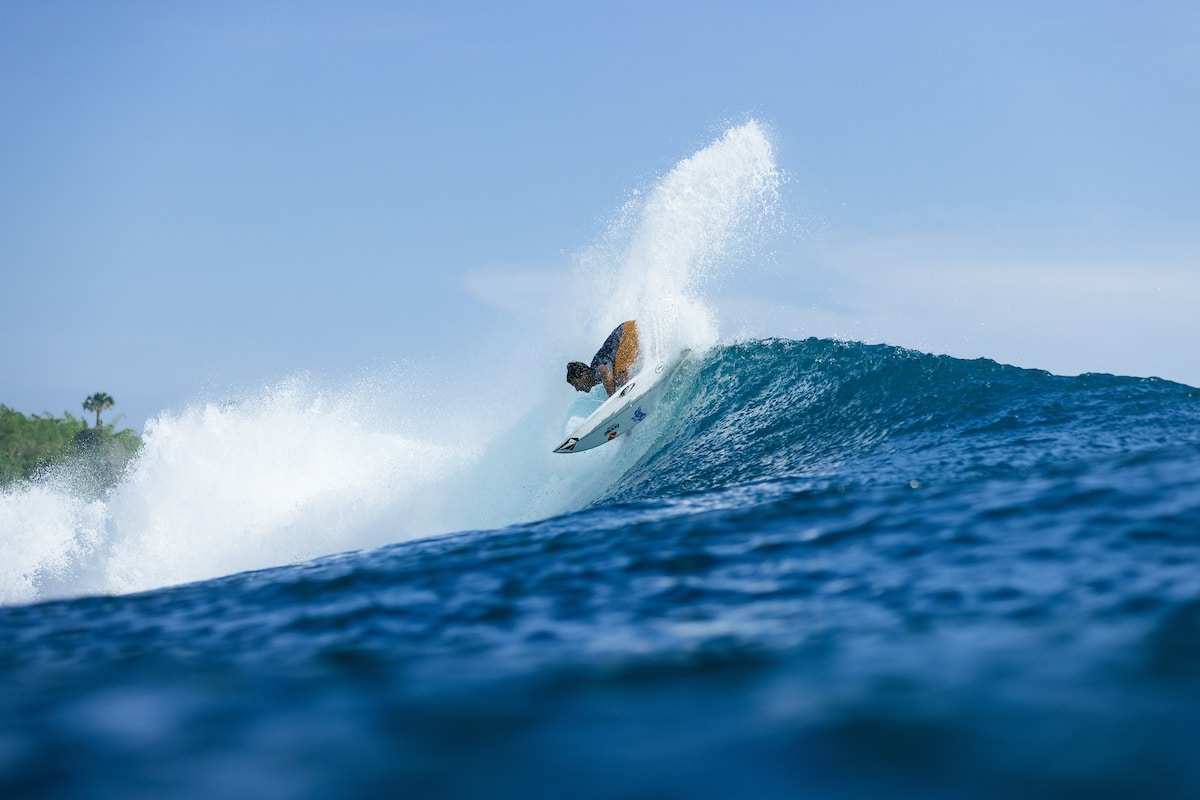 Jack Robinson Wins Back-to-Back CT Events
The men’s Final looked certain to be another CT victory for current World No. 1 Filipe Toledo (BRA) as the lightning-fast natural footer chalked up a solid heat lead early in the matchup, leaving Jack Robinson (AUS, above) chasing a score for the entire matchup. Robinson had a few attempts but was unable to secure the score needed, until with only seconds left, Robinson took off on a medium set wave and jammed three critical backside snaps to post a 7.00 point ride (out of a possible 10) and clinch his second CT victory in as many events. Robinson is now sitting firmly in second on the rankings behind Toledo who despite the runner-up finish, retains the top spot.

“I thank the ocean for giving me that last wave in the final seconds, it was an unbelievable finish,” Robinson said. “I stayed calm, remained confident, and I believed a wave would come to me. This is such an unpredictable and crazy sport. I’m taking each event as it comes and remaining focused and taking back-to-back wins feels great. I dedicate this win to my friend John Dutton from Margaret River, who passed away a few days ago. He traveled here to G-Land a lot and possibly that final wave was from him. Peace and good vibes to the family.” 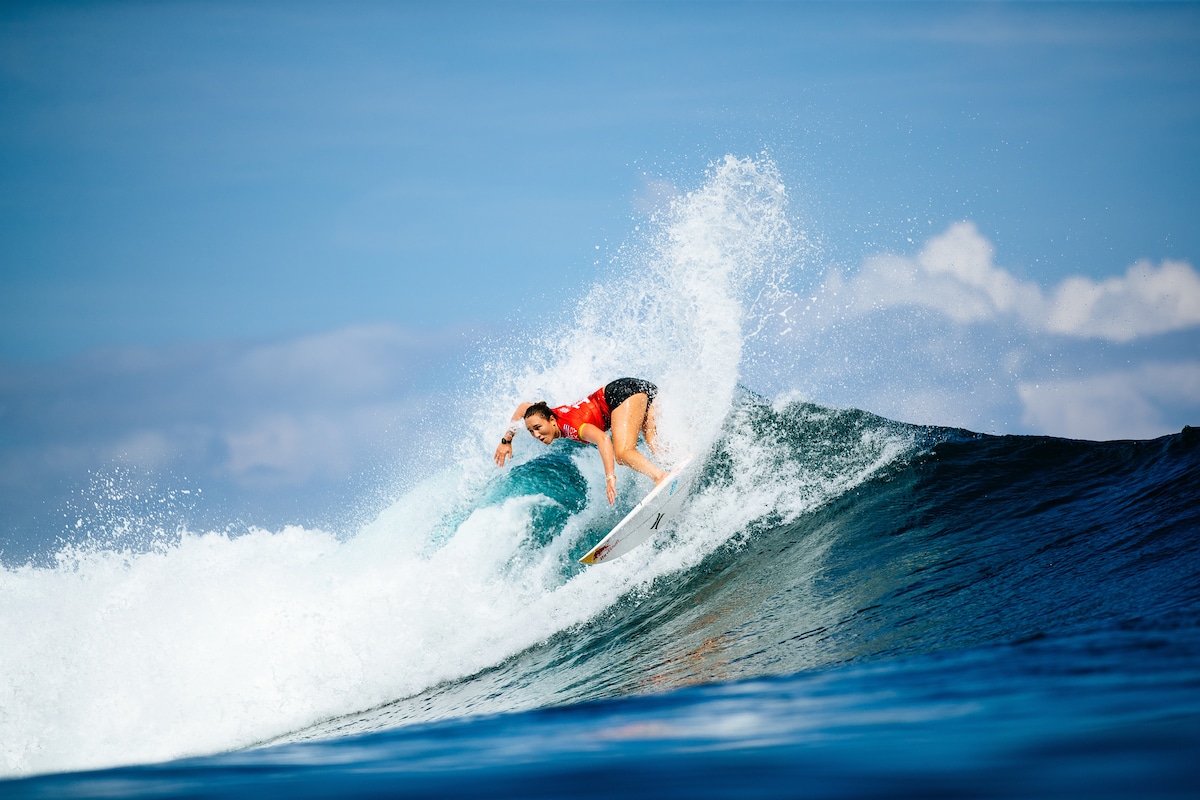 Moore and Toledo Secure World No. 1 Rankings Following Runner-up Finishes at Stop No. 6
With her runner-up result, Moore (above) is back at World No. 1 heading into the Surf City El Salvador Pro, the seventh stop on the WSL CT. En route to the Final, Moore took down Sally Fitzgibbons (AUS) in the Quarterfinals and Tatiana Weston-Webb (BRA) in the Semifinals. Moore displayed her dominant back-hand and will be ready for a rematch in the upcoming events, this time at a prominent right-hand point break.

“This is my first trip here and I was a little nervous about getting used to the lineup and the wave,” Moore said. “It’s actually really similar to a wave at home on the South Shore of Oahu. The people here are so nice, it’s beautiful and there are just good vibes all around. It was great to share that Final with Johanne, I see how hard she works and what she puts in so I’m really happy for her. I definitely made a few mistakes but I had a lot of fun so I’m just going to focus on that.” 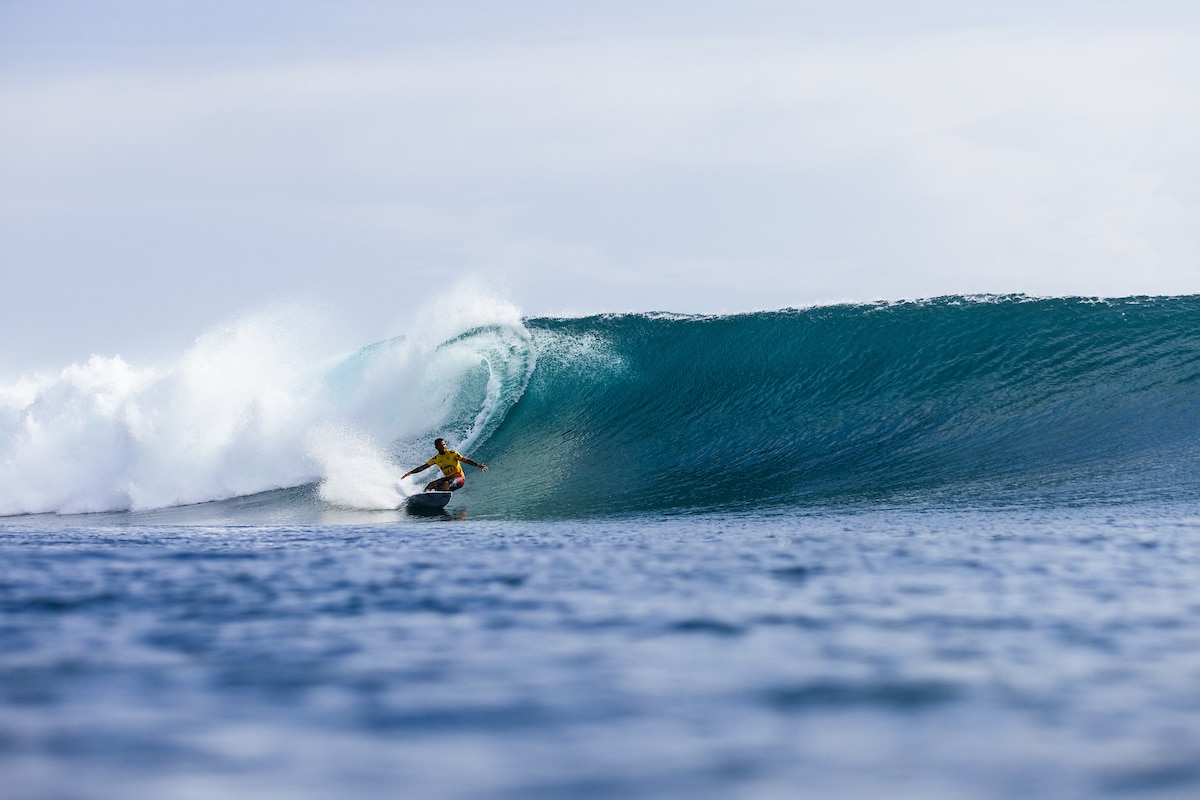 Toledo (above) will retain his top spot on the rankings with his second-place finish. Despite the 27-year-old falling shy of his second CT win this season, he will head into the next competition wearing the yellow leader jersey. Having made the Finals in Portugal, winning at Bells, and securing another Final here at G-Land, Toledo is primed for the back half of the year, heading into a series of pet events as he looks to secure his maiden World Title at Trestles this September.

“It was a really cool experience being here in the jungle and getting to know a new place,” Toledo said. “This was my first time here and I’m really happy and appreciative of everyone from the camps who worked so hard to give us a great experience here. I’m really happy to be in the position I am and I’m hoping to keep grinding, giving my best, and doing everything I can to keep the yellow jersey.”

In a buzzer-beater finish, Robinson took down the three-time WSL Champion Gabriel Medina (BRA). The Quiksilver Pro G-Land marked Medina’s first competition back since winning the World Title last year. The Brazilian looked in incredible form, scoring some of the highest totals of the event, but Robinson got the edge in the Semifinals with a mere 0.57-point difference to take the heat win. Entering into the back half of the year as the WSL CT season wildcard, Medina will need the Final finishes at the upcoming events to put himself in contention for the World Title in 2022. 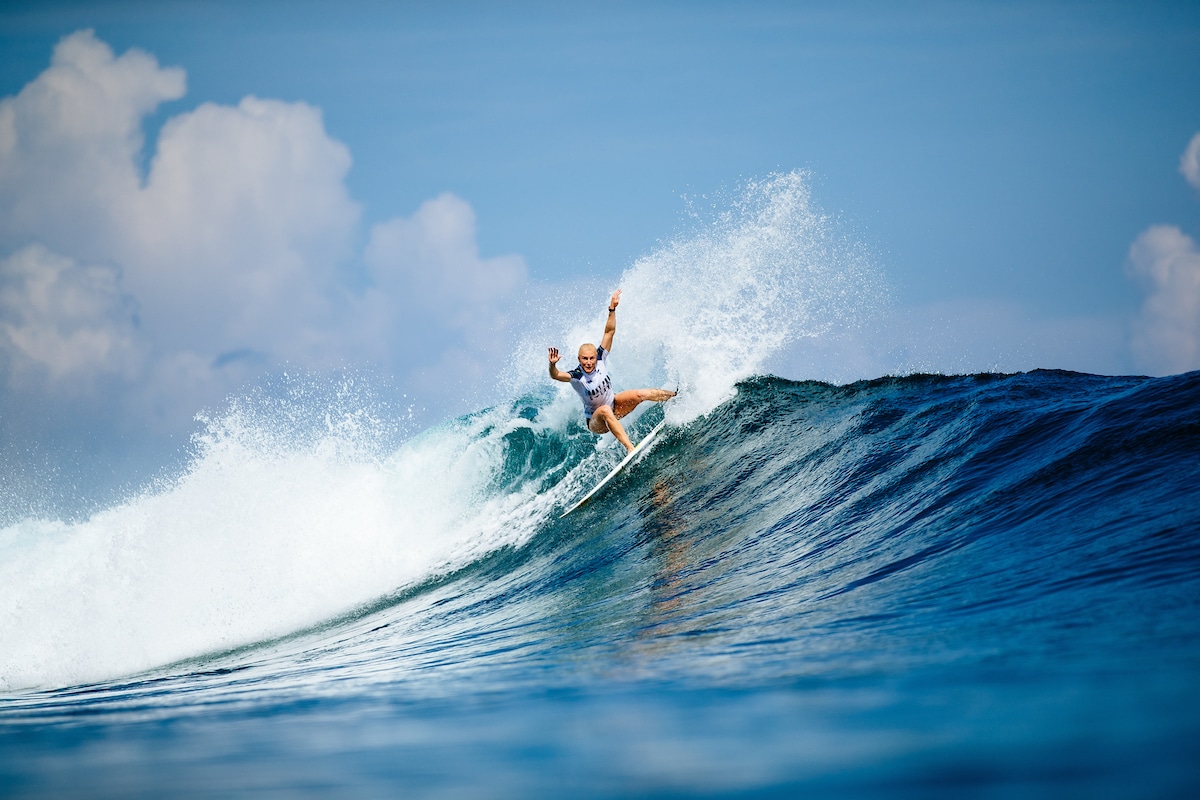 For highlights from the Quiksilver/ROXY Pro G-Land, please visit WorldSurfLeague.com. 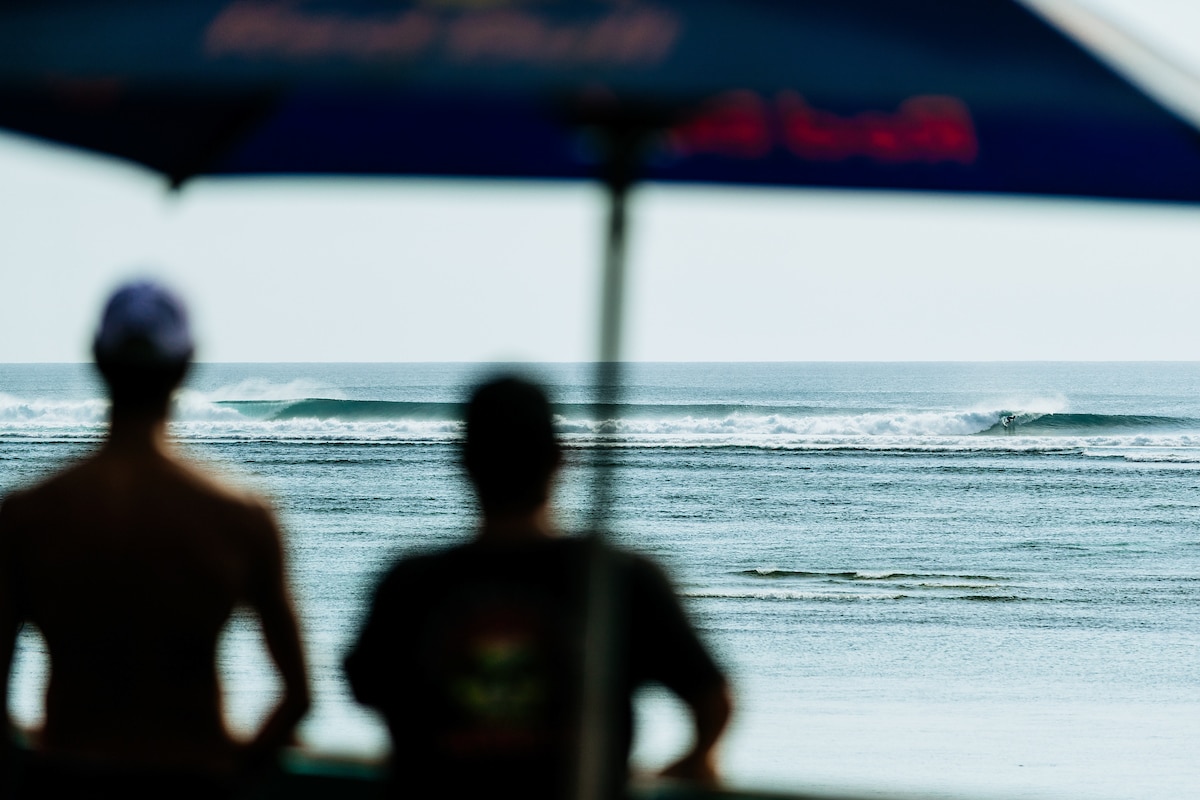