‘Savage Waters’ began as a story of a modern-day treasure hunt. The film chronicles a journey into the wilds of the Atlantic in search, not of gold, but of waves and adventure. In the end, a five-year Odyssey took us four times to a remote outcrop of Atlantic rock, thousands of miles from our homes; and the treasure we found was of a very different sort to any we had imagined at first.

As a child I was obsessed with the romance and adventure of sailing to faraway lands. From Swallows and Amazons, to The Cruel Sea and The Last Grain Race, I devoured sailing tales. On the TV I was glued to Cousteau’s documentaries, and drama such as the Onedin Line. It was inevitable that at some point I would find myself on a sailing boat crossing the ocean. A teenager in the 1980s, I hitchhiked my first Atlantic crossing, and for some years thereafter worked my passage under sail, around the world, becoming also a passionate surfer along the way. There was romance, adventure, joy, heartache, tragedy and loss; until one day, I met a beautiful mermaid, who’s robust enthusiasm for life on, and in the sea, surpassed even my own. 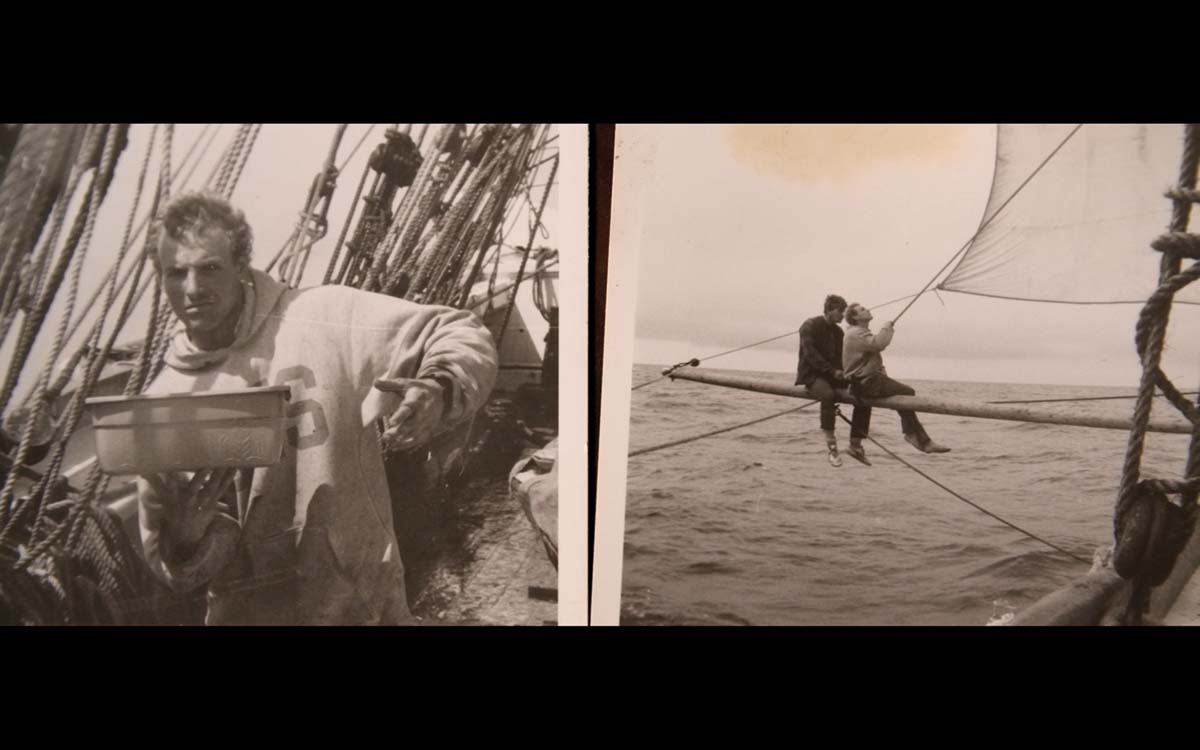 Twenty something years later, Suzanne (the beautiful mermaid) and I, found ourselves the very proud parents of four lovely grown-ups, all of them equally able to handle themselves in heavy mud, heavy surf, and also at home far out in the deep ocean. Inspired by George Greenough, in 2010 we decided to set off in search of unknown waves under sail. With remote Pacific atolls in our dreams, the vessel we chose, partly for romantic, but also financial and technical reasons, was a James Wharram design – a simple but seaworthy catamaran based on a Polynesian double hulled voyaging canoe.
We soon realised that the journey from our family home in North Devon, to those dreamy faraway atolls, was going to take some time – and even in a Wharram would need funds we didn’t have. Plus, the children were all at key stages of full-time education at that point, variously doing GCSEs, A Levels and Uni; and two of them had become such competent surfers that they were representing club and country in competition. So, we decided to start near to home, doing some surf charter work around the UK, Ireland and NW France, thus delaying our departure until we could afford to set off on the Big Adventure, and potentially to enable the whole family to go together. 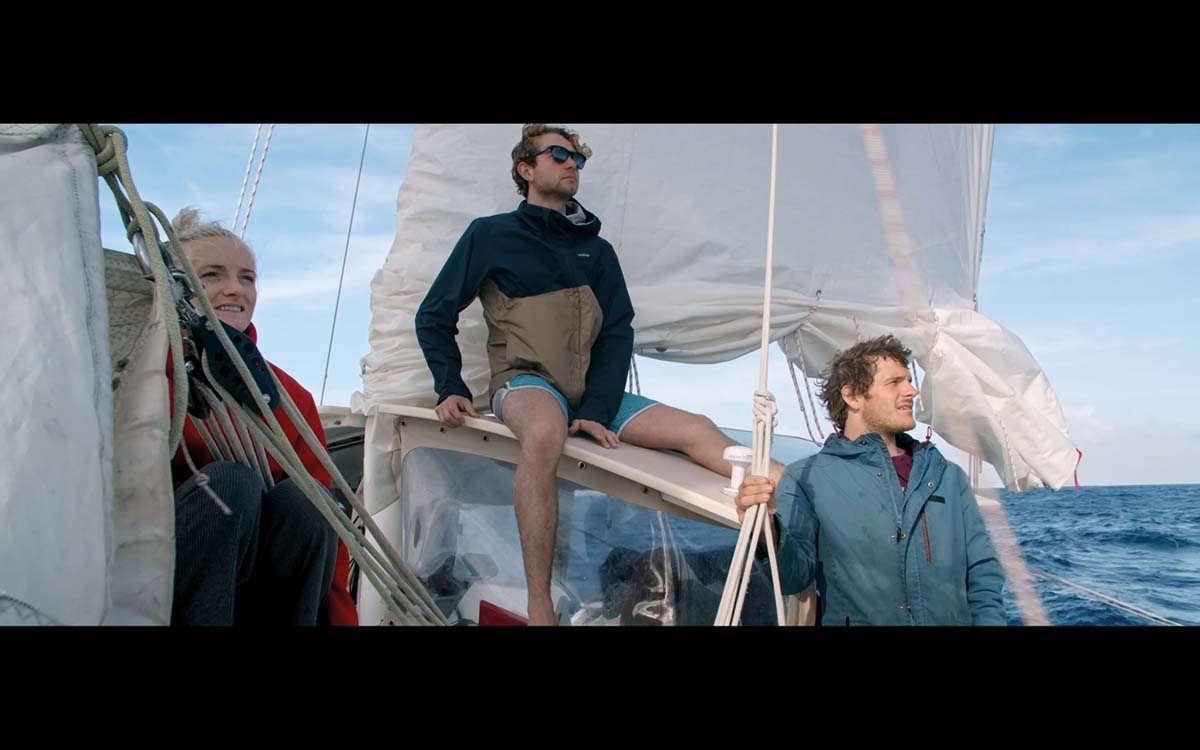 It was during this time that a casual conversation with Carve Editor Steve England first brought the Ihlas Selvagens to our attention. It says much about their remote and relatively unknown existence that I had actually sailed right past these rugged outcrops of rock on two separate occasions on passages across the Atlantic, without even clocking their presence. Steve and I were chatting about the possibility that unknown waves might yet exist in European waters when he mentioned the Islands, whose translated name aptly describes them: for they are indeed Savage. A seed was sown during that conversation, but I wouldn’t find out for some years how that seed would grow into such a huge part of our lives.
We had the great good fortune during this pivotal time (by now 2015-2016) to have a surf charter booking out in Ireland, and whilst sailing there we stumbled across a giant offshore wave in Donegal Bay. Here is where the first of many coincidences led us eventually to the Selvagens. Unknown to us, Andrew (Cotty) Cotton and Al Mennie had already been scoping out this particular spot. A chance conversation with Cotty in the pub back in Croyde led to another more specific brainstorming session, and we ended up working for his sponsor RedBull on a documentary. ‘Beneath the Surface’ chronicled a winter of trying to score that cold and unforgiving Irish behemoth, and subsequently a further, big wave search expedition to Southern Portugal. 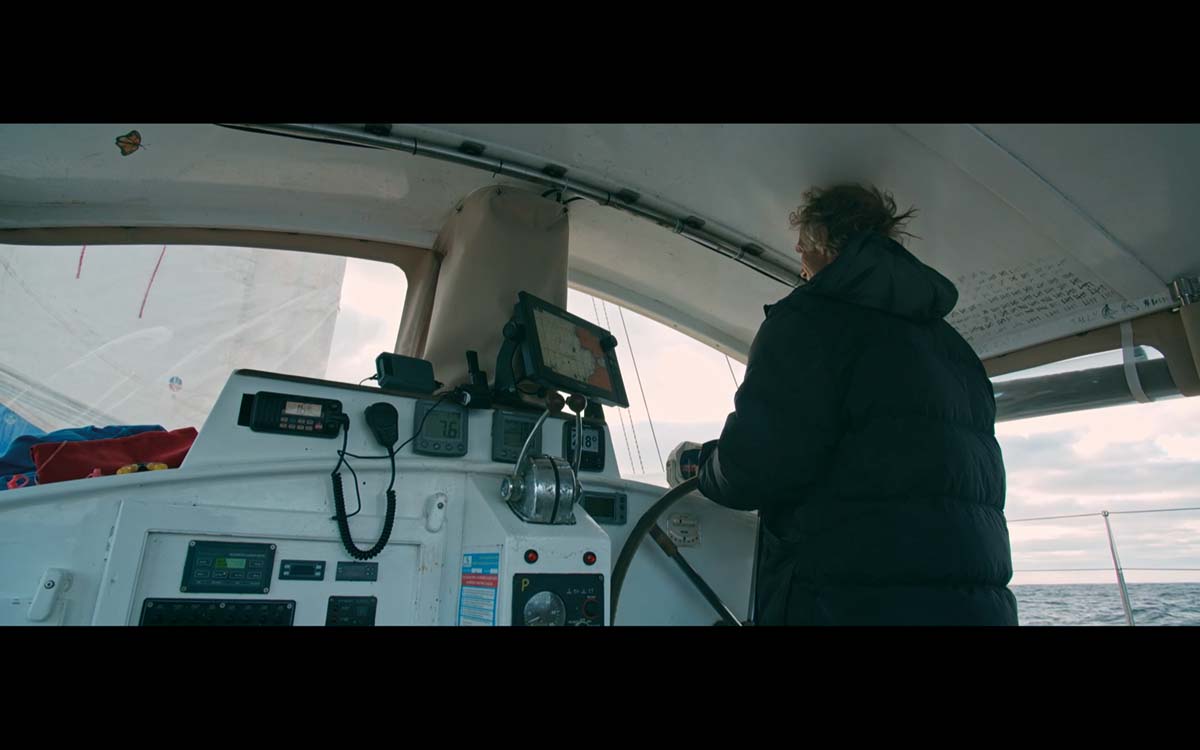 Now came the second of the great coincidences that watered and fed the seed that had been quietly dormant in my mind since it was first planted five years before. An old Cornish shipmate from my early sailing days lent me a book. It was a dusty first edition of The Cruise of the ‘Alerte’ , written in the 1890s by E.F. Knight, a Victorian gentleman who was my namesake. It told the story of a real treasure hunt. Suzanne and I both read the book because it’s a great seafaring yarn, but it wasn’t till we had finished and were discussing it afterwards, that the significance of what we had read became clear. Buried in the text lay a giant clue, pointing not to the exact location of plundered gold, (which E.F. Knight and his crew never found), but to a different treasure altogether. For there in black and white, described over several paragraphs in wonderfully colourful Victorian English, was a vivid picture of a colossal and perfect, slabbing barrel, going absolutely nuts, in this remote and uncharted place called the Savage Isles, that we had hardly ever even heard of.
As the mermaid and I agreed that this passage had stood out for both of us as a bright, flashing signpost that said, “there lies treasure”, I suddenly remembered that long ago conversation with Steve… and that was when the lightbulb clicked. From that moment on there was never any doubt that we would be going to look – to see whether that crazy and perfect wave, breaking out there unridden, no doubt for millennia, and first described by E.F. Knight in 1890, was still there. 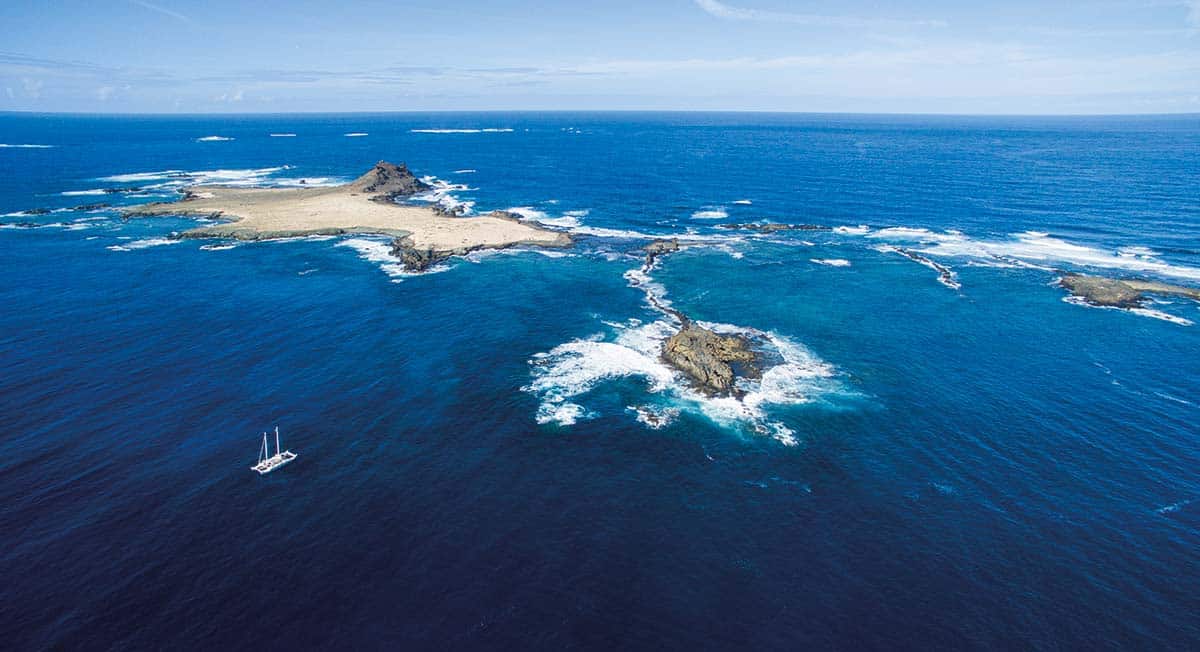 I am not going to give any serious detail here about what happened next. You’ll have to watch the film to find out. Those coincidences that led us to set sail for the Selvagens after that initial inspiration, later became deeply buried under shocking and life changing events, over which none of us could have any control. In brief, our journeys to and from the Selvagens took us, Cotty, our great friend and talented film maker Mikey Corker, plus our extended crew of family and friends, to Nazaré, Madeira, the Canaries, back to Ireland, out to Cape Verde, and the Azores, via a completely random circumnavigation of Great Britain, with a crazy and loveable swimmer called Ross Edgley.
Numerous times during this whirlwind few years, the search for the Wave on the remote and inaccessible Ihlas Selvagens was relegated to the backburner, as life events swirled around us and funds dwindled. It was not until Cotty met our passionate and committed Producer, Ghislaine Couvillat (the owner of the production company Whipped Sea and executive producer of other ocean adventures and surfing feature length documentaries such as ‘Girls Can’t Surf’ and ‘Against the Tides’), that we were finally able to plot a course for our last of four exploratory missions to those fabled Treasure Islands. 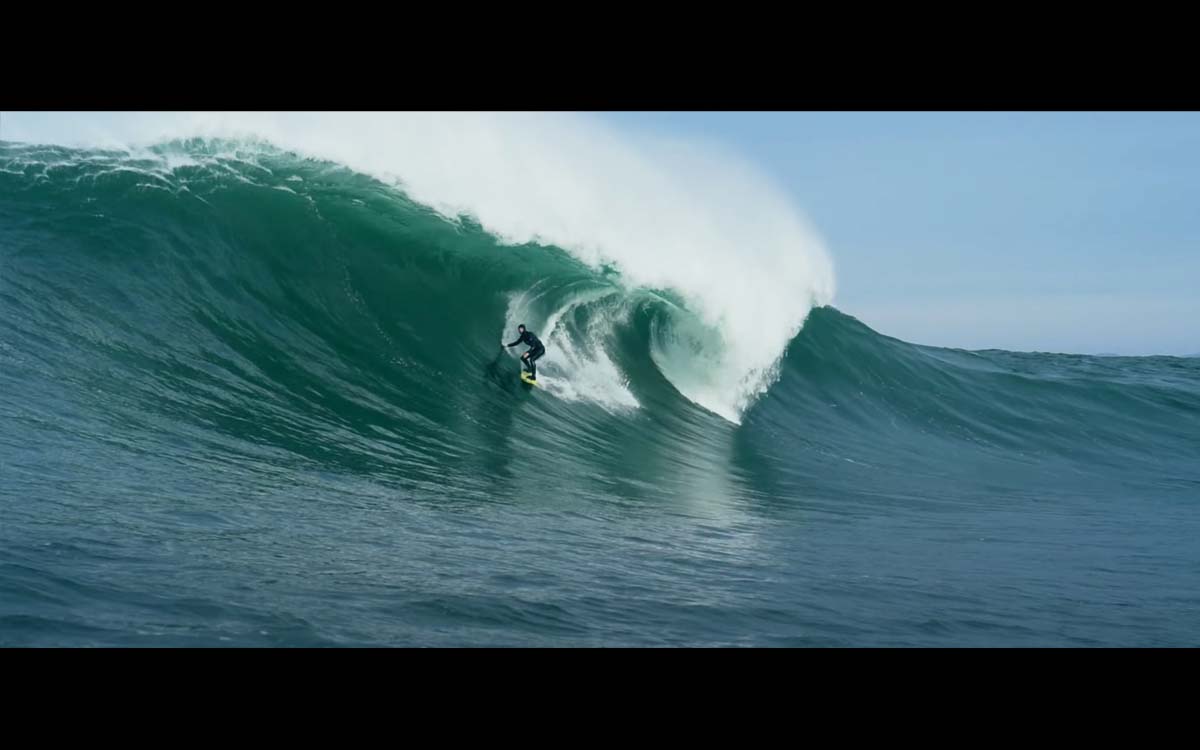 The wonders that are to be experienced over a lifetime of ocean passages: the adventure, the beauty, the wild and natural spaces, the ethereal majesty of a night sky unpolluted by artificial light or even by the shadow of land; all those wonders are balanced by the terrors, tragic losses, discomfort and pain, the inevitable hardship that living on the ocean will deal out from time to time.
That balance, and the fact that however hard we try to control or plan, we are never really able to anticipate the unexpected curve balls that life at sea throws – have been a strong part of our story. ‘Savage Waters’ dives deeply into how those elements are mirrored in our complex lives as human beings, floating through space on the thin and fragile smear of habitable soil, on this ball of rock called Earth, buffeted by chaotic cosmic forces that are beyond our control. ‘Savage Waters’ became a journey, and describes a path of adventure, drama, disappointment and discovery, pain and loss, endurance and resilience. Ultimately through love and hope, we are led towards acceptance: of our limited time, and our small place in the universe.
Savage Waters’, directed by Mikey Corker, documents a captivating surf adventure that became an odyssey through life with perils the crew would have never imagined.

It’s World Premiere as the Opening Night Film at DocLands Documentary Film Festival in Marin County, California on 5th May 2022. The screening will be followed by a special Q&A.