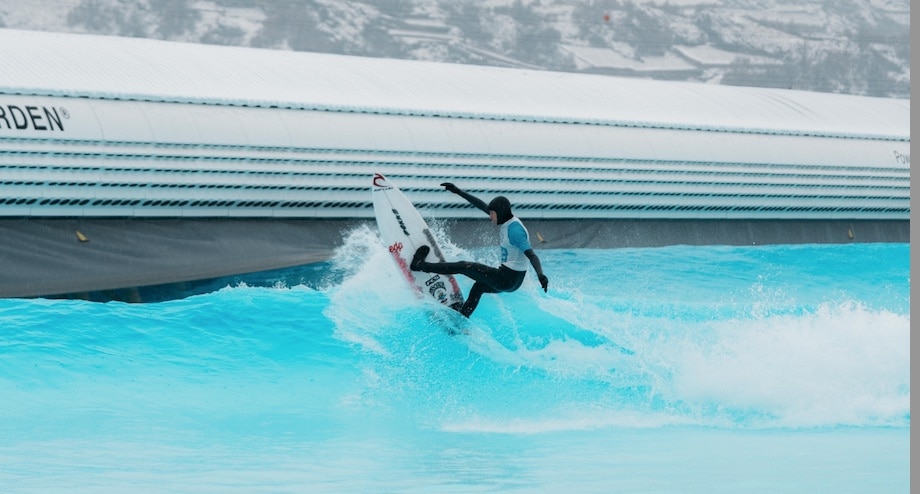 It was a hotly-contested opening day of surfing at the Alaïa Open Winter Cup.International and Swiss competitors were battling it out in the perfect surf that Alaïa Bay delivers.

Despite many of the competitors experiencing their first ‘snow surf’ session as light snow fell throughout most of the day, some incredible surfing and big scores were coming through. With US$75k in prizes and cash on the line, there was no holding back from anyone.

Air moves were getting good scores, and surfers could be seen boosting into the sky on both the lefts and the rights. Top rides consisted of two or three big moves on the outside and a complete air move on the inside. Heat winners were going to the airs on their first moves, and these surfers took the most risks.

In the Men’s division, Brazilian Michel Roque was performing the best, banking a score of 17.84 with some power surfing in round one. The goofy-footer was surfing tight and polished and scored an 8.77 for one of his earlier rides and then added an excellent 9.0 score to shut the door on his fellow competitors.
Other top surfers included Justin Becret from France, Hans Odriozola from Basque Country, and Lenni Jensen from Germany. South African surfer Mark Fessler and Australian powerhouse surfer and surfboard shaper Mark Phipps also competed. Unfortunately, both failed to post the big scores needed.

Nadje Erostarbe (Basque Country) was the top performer in the women’s division along with Maud Le Carr from France. Lucia Martino from Spain and Swiss surfer Rachel Bonhote-Mead were other stand-outs in this division.

Kai and Hans Odriozola (Spain) were the Junior Division stand-outs, and Jamie Veselko (Portugal) and Alejo Valido (Canary Islands) were on top of the leaderboard in the kid’s division.

“What an awesome day of surfing! We are incredibly stoked to be hosting this unique event at our facility,” said Alaïa Bay founder Adam Bonvin. “To have an event of this magnitude take place while the snow is falling must be a world-first, and the surfers have been performing incredibly today. We would like to wish the best of luck to all those surfers who are through to the final day tomorrow.”