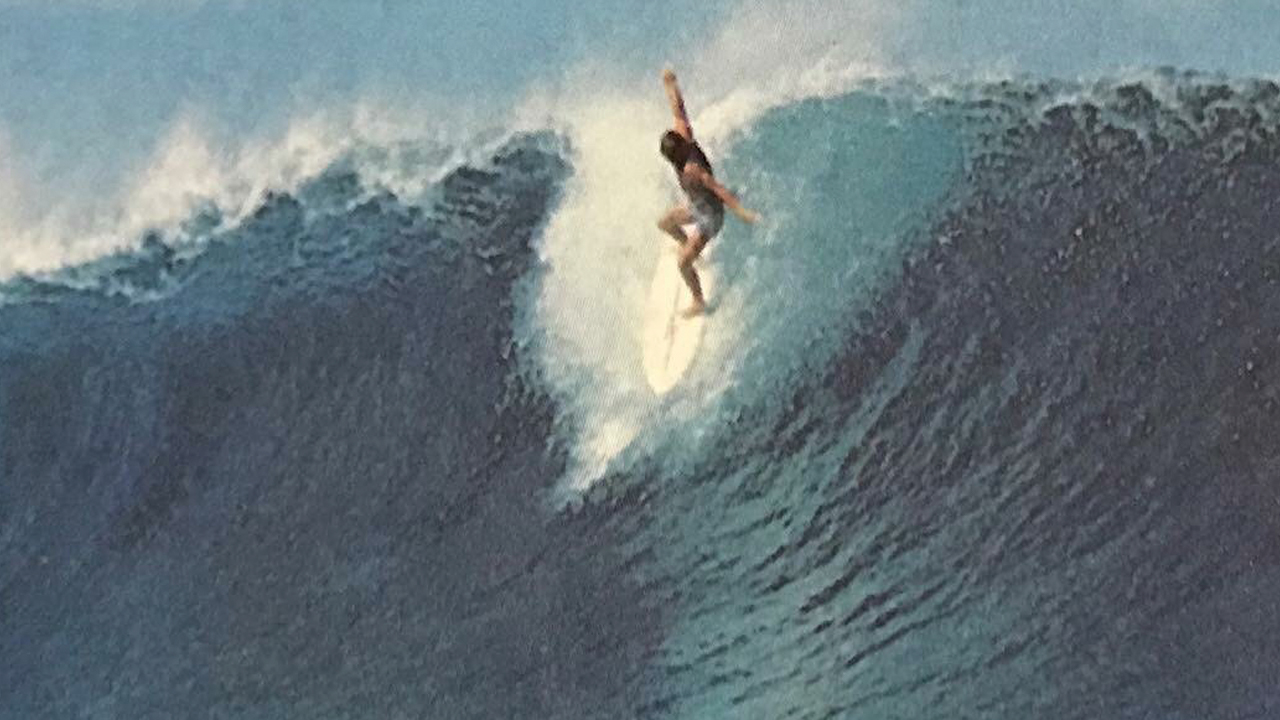 Above Ted at Pipeline Photo: Divine

EXCALIBUR
There were clearly defined periods in Ted’s life. Each had a name, a brand. The Lightning Bolt era gave way to Sabre; Sabre gave way to Excalibur. Which gave way to Lola.
In a way, Excalibur had always been there.
Everyone remembers the legend of Excalibur – the magic sword that Merlin places in the stone (or anvil), and which can only be removed by the true King. All the young wannabes, the pretenders, troop up and confidently grasp the hilt but are unable to take possession of the sword, no matter how hard they try. Only young Arthur, quite unexpectedly, but effortlessly, can grasp the sword and make it his own. Thus he is the One, divinely appointed and sole heir to Uther Pendragon. “Whoso pulleth Out this Sword of this Stone and Anvil, is Rightwise King Born of all England” (Thomas Malory). Some say that the sword in the stone and Excalibur are two different swords, some say they are one and the same, but either way, Excalibur is a magic sword. That sword is like a crown, bejewelled and engraved with mystic messages. If you own it, you rule. A weapon of immense power, but also an instrument of peace. Even the scabbard in which the sword rests is itself magical and can heal the wounded. In the end, as Arthur lays dying, and is spirited away downriver on a transcendent barge, he commands one of his attendants to cast the sword into the water, where a mysterious hand – belonging to the Lady in the Lake – rises up to receive it and from whom, one fine day, it is destined to be reclaimed by a descendant of Arthur, who will recreate the Round Table and the wonderful land of Camelot. Recovered from the water. From the hand of the Lady of the Lake. A second coming. On a par with the Holy Grail.
Excalibur. Everyone knows it, no one believes it, except for poets, novelists, and Walt Disney.
And Ted. 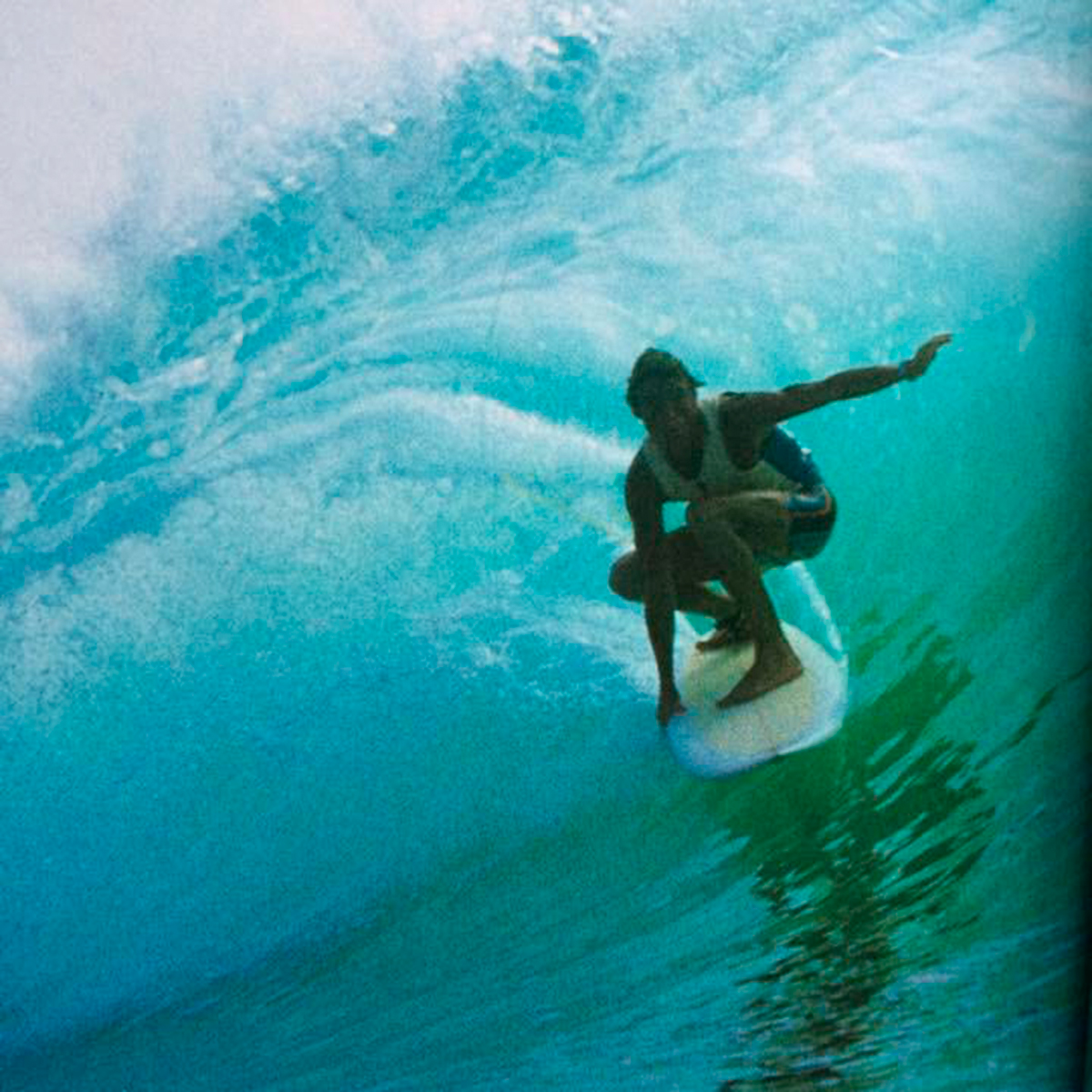 Ted believed. He had faith. Excalibur was real. And if it wasn’t, well, then he would make it real. He would take a myth and insert it into everyday life and thereby transform the world. He would, in a way, become Arthur. Or at least Merlin. Perhaps he was indeed, if Arthur had any substance to him, through the ancient Coventry family, a descendant of Arthur. He surely had a drop of Arthurian blood running through his veins. Maybe every true born Englishman did. In the absence of a handy stone that he could miraculously draw the sword out of, Ted talked Paul Holmes, an expatriate Brit who was then editor of Surfer, into funding a real sword, to be forged by the jeweller Mitch Nugent in England. A blade made of steel and a hilt cast in bronze and silver and encrusted with sea creatures set against some trop- ical backdrop. “A treasure any king would be proud to wield,” Ted announced to the world. Engraved with the words, “The Spirit of Surfing”, it was to be awarded to the winner of the Excalibur Cup, a charitable surfing competition dreamed up by Ted. “According to legend,” he recalled, “Excalibur could not be defeated in battle, as long as the user would only fight for right and justice, a noble concept.” Only Queen Guinevere was missing – but surely, reasoned Ted in his mystic logic, once Excalibur existed then Guinevere could not be far behind. As it once had been, so it must be again: the present moment appeared as only a temporary falling away from perfection, a transient and intermediate state that could not endure.

The idea first came to Ted in Australia, he said, when he was having a game of tennis with Rabbit Bartholomew. Singles. Man-on-man. In a classic lightbulb moment, Ted realised that the very same man-on-man concept could be applied to surfing. Eureka! A very fine idea. So fine, in fact, that it had already been espoused by the ASP, the Association of Surfing Professionals. The Excalibur Cup would therefore, in effect, be a rival to the ASP tour, the grand prix circuit. And, to some extent, an antithesis, almost an antagonist. It was Excalibur vs the ASP. Because the ASP was, as its name implies, “professional” and surfers expected or at least hoped that they could earn a living – or at least pay their expenses and keep the wolf from the door – by surfing under its auspices and participating in its contests.
Whereas Excalibur was all about charity.
As Paul Holmes, then editor of Surfer magazine, put it, “Ted was going in the opposite direction”. As was his wont.
Nobody would win any money, nobody would be paid a penny, all proceeds would go directly to good causes, entirely omitting the shrewd and well-paid middle man. Excalibur was a vision of how the world might be. The ASP was simply an extension of the way the world is. Surfing as myth and legend – or surfing as a form of materialism, a career, in which you could work your way up the greasy pole. Ted tried to belong to both worlds, but his heart was really in Excalibur, the chivalric code. Chivalry was not yet extinct.
“To gain, one has to be willing to give.” Such was the founding principle of Excalibur. The idea was to encourage or enable underprivileged or disabled kids to get to the beach and enjoy the “spirit of surfing”. A non-profit foundation was formed, its mission “to promote the sport of surfing, teach its participants the chivalrous concept of doing for others, and to raise funds for less fortunate individuals so they may enjoy their lives.” At first, Ted’s idea took off. He found established surfers willing to give of their time and energy and prowess in a quest for virtue and altruism. It was true Round Table stuff. These were one-day events involving the top eight surfers in the world. They pulled in the crowds and they raised thou- sands of dollars for youngsters. The inaugural event in 1982 at Burleigh Heads took place amid six-foot barrels and was won by Hawaii’s Michael Ho, beating Australian Cheyne Horan in the final. Perhaps the result could even heal the wounds inflicted by the Bustin’ Down the Door war and thus usher in everlasting peace. Ted recruited Australians who were towering figures in the sport such as Derek Hynd and Mark Richards to do the live commentary. Not to mention Australian “Playmate of the Year”, Lyn Barron.
When Ted moved back to America in 1986 he took the Excalibur Cup with him. The “Excalibur Cup Foundation” was formed, “an independent non-profit corporation”. He had a vision of “getting the attention of all America” and raising at least $50,000 for good causes (“Special Populations”, “Monmouth County Seals”). Events took place, with reasonable success in Florida (three-foot barrels and offshore winds) and further north in New Jersey. “Much like in the legend of old,” Ted wrote when 15-year-old Kelly Slater – the future many-times-over world champion – took the title, “the youngest proved the most worthy.” They picked up celebrity support from actress and old flame Heather Thomas (by then the star of a TV show, Fall Guy) and Jack Sonni, guitarist with Dire Straits, who was a recent convert and enthusiast. Ted even invited the Prince and Princess of Wales (ie Charles and Di) to hand over the prize (a very pleasant letter from the Palace in response regretfully declined). 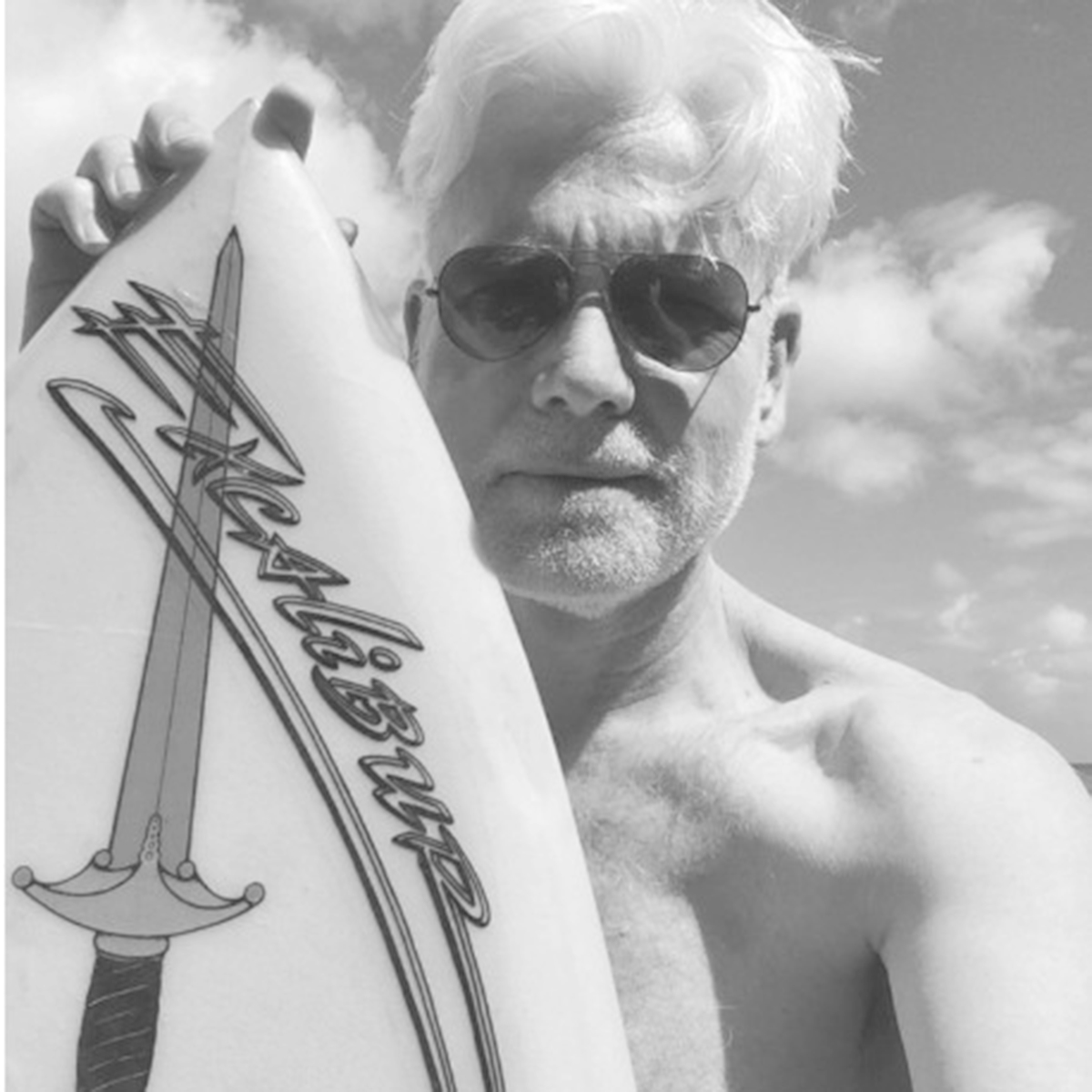 However, putting on surfing contests, as Ted discovered, also requires the cooperation of Nature. After one particularly flat, cold, surf-free day in New Jersey (previously described in Ted’s hopeful notes as “a natural amphitheater” and a “consistent beach break” a mere hour and a twenty minutes train ride out of New York), Ted took the whole event off to the West Coast. Ted wrote, in his Excalibur notebook, that “surfIng has always had difficulty attracting the attention of the general media in America and it was hoped that by including celebrities more interest could be generated and greater amounts raised for our worthy causes.”
To some extent, this theory seemed to be borne out in practice. “Heather Thomas was his Guinevere,” said Paul Holmes. Surfer paid for a whole page in Ted’s program wishing Excalibur CONGRATULATIONS. Ted wrote, “The long lines of fans waiting for Heather’s autograph in the cold weather of N.J’s spring proved this [the celebrity theory] true in 1987”. Surely on the West Coast this would be truer than ever, what with the proximity of Hollywood and Baywatch. Ted had visions of movie hunks and romantic interests desert- ing the set and taking to the waves in their droves. It would be a win-win. They had more to give and therefore more to gain. It was, to Ted’s way of thinking, only logical. But it turned out to be a Faustian pact. Excalibur became dependent on the whim of celebrities. Would they give a thumbs up or down? At the same time, surfing itself was becoming more than ever professional. And, reluctant though Ted was to admit it, something of the elusive “spirit” was being hoovered right out of it. Sponsors were energetically sought, and there was talk of Disney, and Universal Studios, among others, pitching in, but hard cash remained elusive. No Disney but only ‘FIJIAN TANNING PRODUCTS” and “Steve’s Breakfast and Lunch”. At the bottom of the cover of the Excalibur Cup program, 1988, there is a forlorn note: “A Contribution of any amount is appreciated to underwrite the cost of printing”.
Fast-forward to Hawaii, 1991. We are sitting on the beach at Pipeline, Ted and I, waiting for his heat. The waves are perfect, in a way, vertical and tubular, but also precarious and terrifying. They rear up like immense steely blue cylinders, almost industrial, rolling off the assembly line of the reef, then smashing down and pulverising anyone unwise enough to get in the way. As Pottz once said, there is enough skin on that reef to stick a couple of humans together. Ted is fully focused, replaying some tank battle from the Second World War. Alamein perhaps. The sand is the desert. He actually has some toy tanks and soldiers scattered around. He is pointing out that if only Rommel and his Africa Corps had done this or possibly that, then he would have broken through Montgomery’s lines and made it all the way through to the Nile, thus decisively affecting the course of the war. 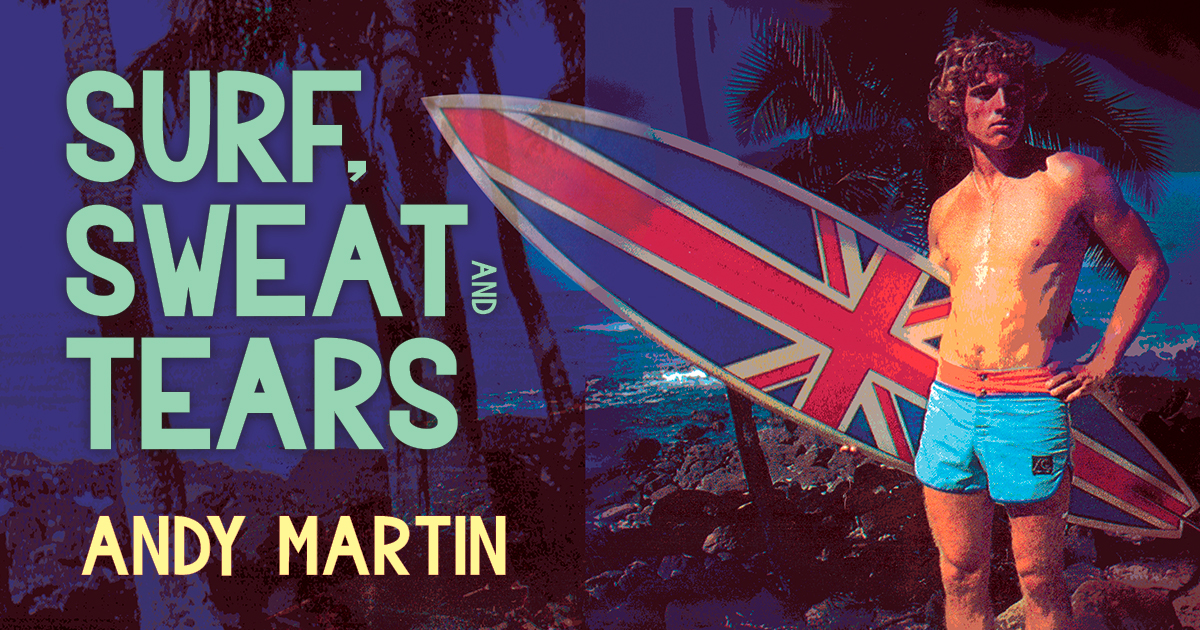 Copyright © 2020 Andy Martin. May not be reproduced in print or electronically without permission in writing from the publisher.

Surf, Sweat and Tears is available now from OR Books, New York. Click on the link below and enter the discount code CARVE15 to get 15% off the cover price of the print or e-book: 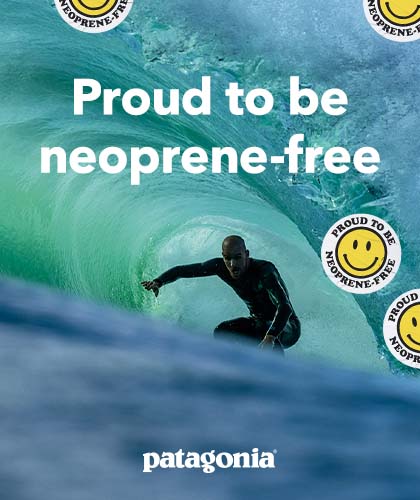