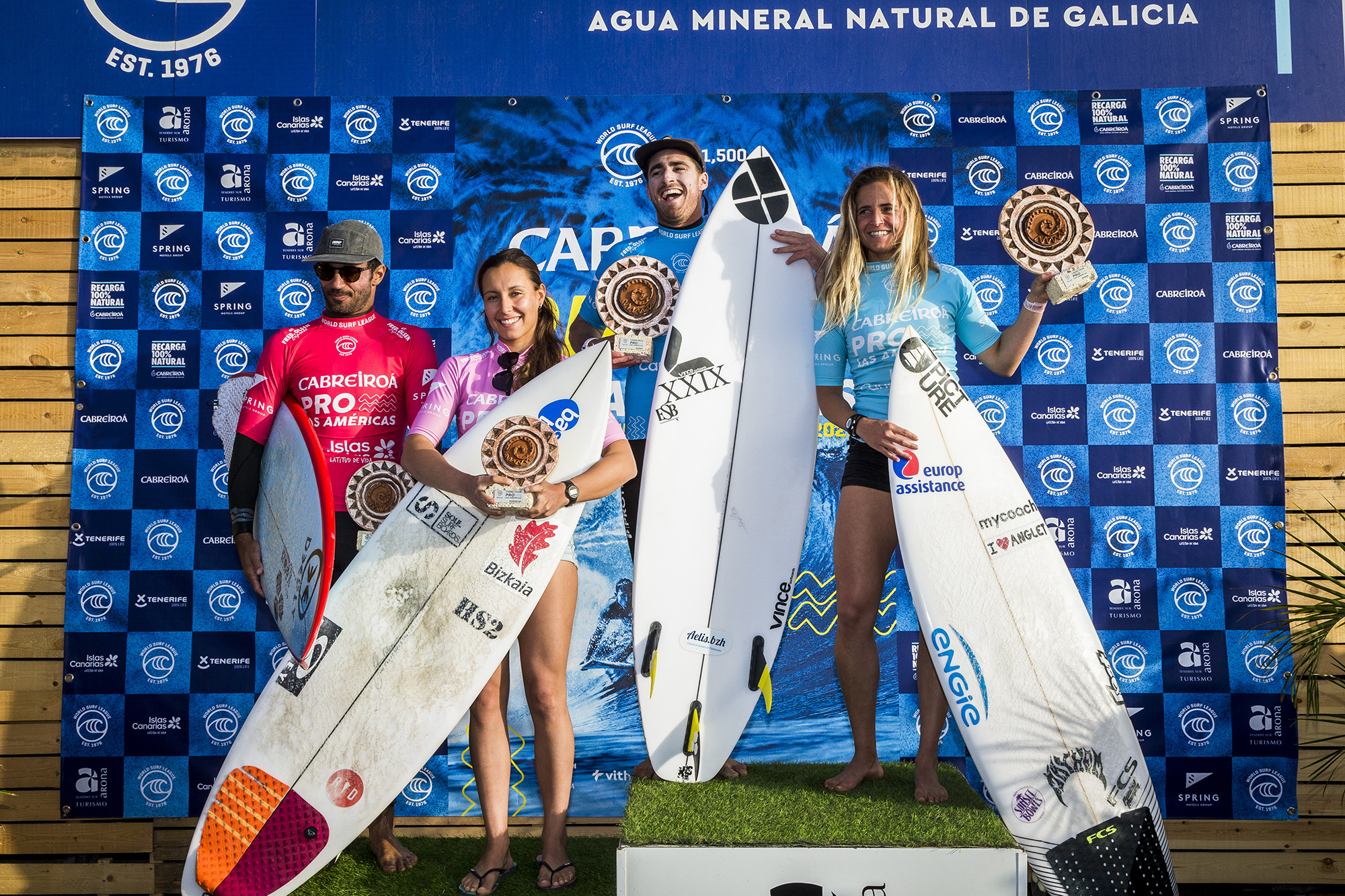 Local Tenerife legend Jonathan Gonzalez (CNY) took on Gaspard Larsonneur (FRA) in the men’s Final. The Canarian marched his way to the Final with seven straight heat wins and excellent scores in nearly all of them, including an incredible 9.53 in Round 5. 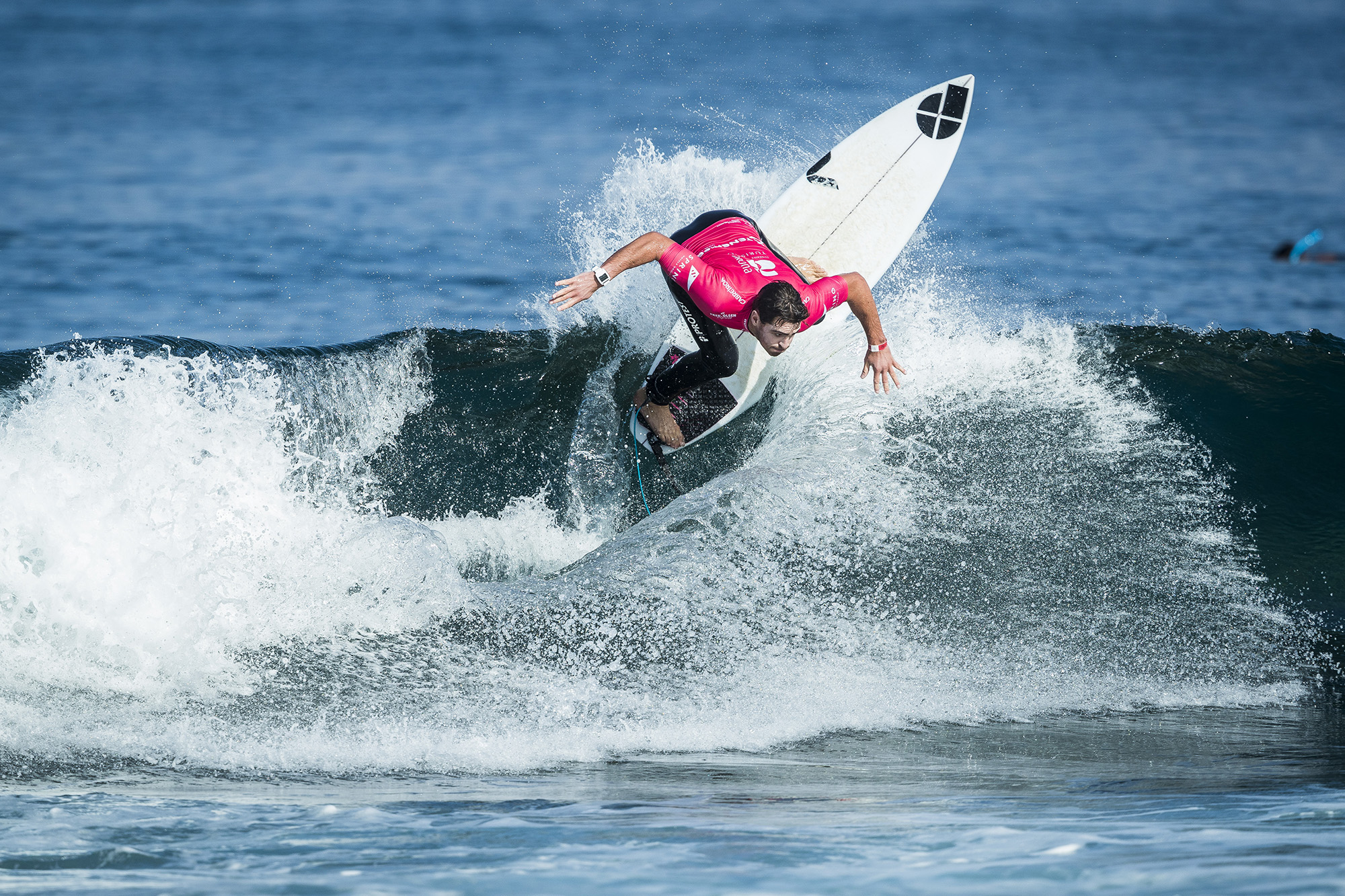 The Frenchman, on the other hand, launched his event in Round 3 and started collecting wins when he eliminated the defending event winner Timothee Bisso (FRA) in Round 4 alongside Jensen whom he would later dispatch in the Semifinal.

The Final started with a very close exchange on back-to-back waves with each surfer within 0.10 of each other and continued with an even closer battle on their second wave, finishing within 0.04. After four waves, Larsonneur had the tiniest margin over Gonzalez, 14.06 to the Canarian’s 14.00. 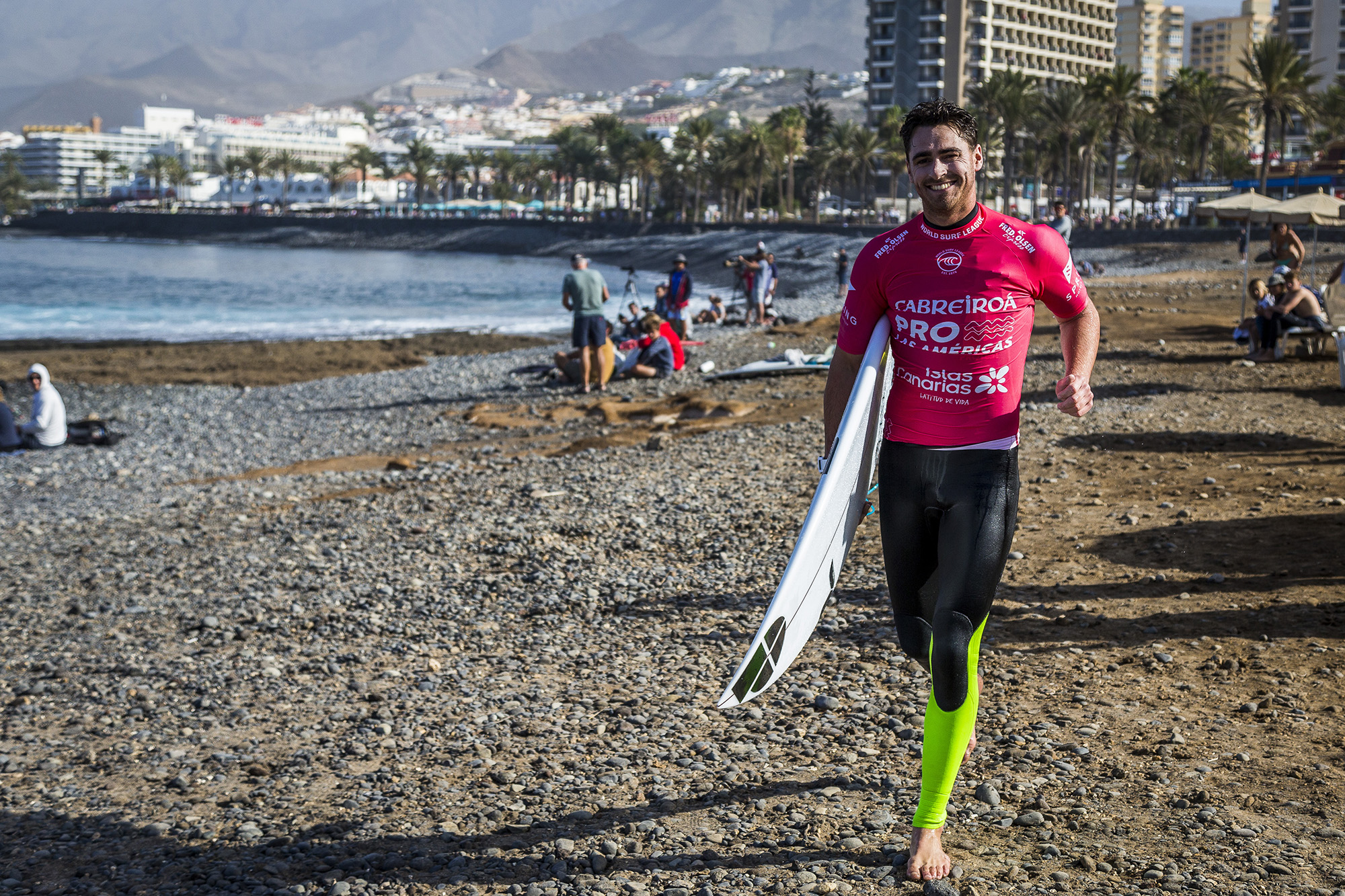 Gonzalez managed to turn the heat midway through with a good wave scored 7.70 while Larsonneur got stuck on his turns and only raked in a medium score. The French surfer didn’t let the pressure affect him and managed to come back with an excellent 8.17 in the dying minutes of the heat to claim his first-ever victory on the Qualifying Series.

“I’m so stoked,” he said. “This is my first-ever win on the QS, I have no words to describe how happy I am right now! It was just the perfect week. I had a really good time here with good friends, nice weather and good waves so I’m just beyond happy.”

Larsonneur is only really starting on the QS, last year being his busiest season with 8 events surfed mostly on the European continent. Today’s victory marks his first on the WSL tours and a promising start of the season ahead for the surfer from Brittany.

“Today was tough with that long break between the Semis and Final,” he added. “I tried to stay focused and rest a little and when I came back I was fired up to go again. ” 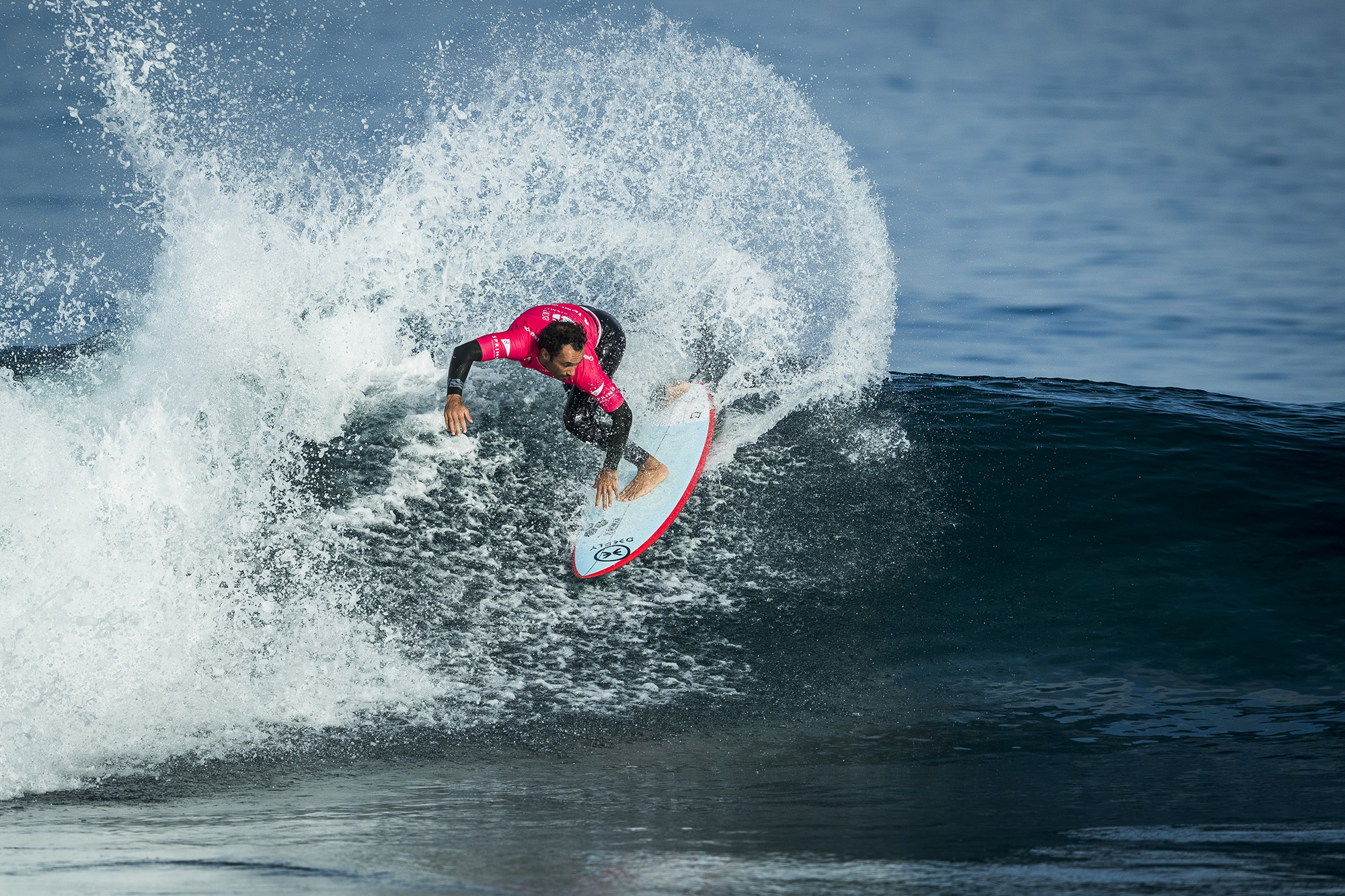 A QS standout for the last decade now, Gonzalez peaked in 2014 with a Top 25 finish. The last couple of years the Canarian carefully selected his events but couldn’t possibly pass on the opportunity to compete right at home. This runner-up finish marks his first Final since 2016.

‘It was a really hard-fought final and it came down to details,” he said. “I was surfing well during the entire competition so I am happy with that, but I had to surf perfectly against him to win the final. It was really really close but the competitions are like that with nothing decided until the final. I have to admit I felt the pressure of everybody watching and I couldn’t quite control it. I’m still super happy to celebrate second place with all my friends here.” 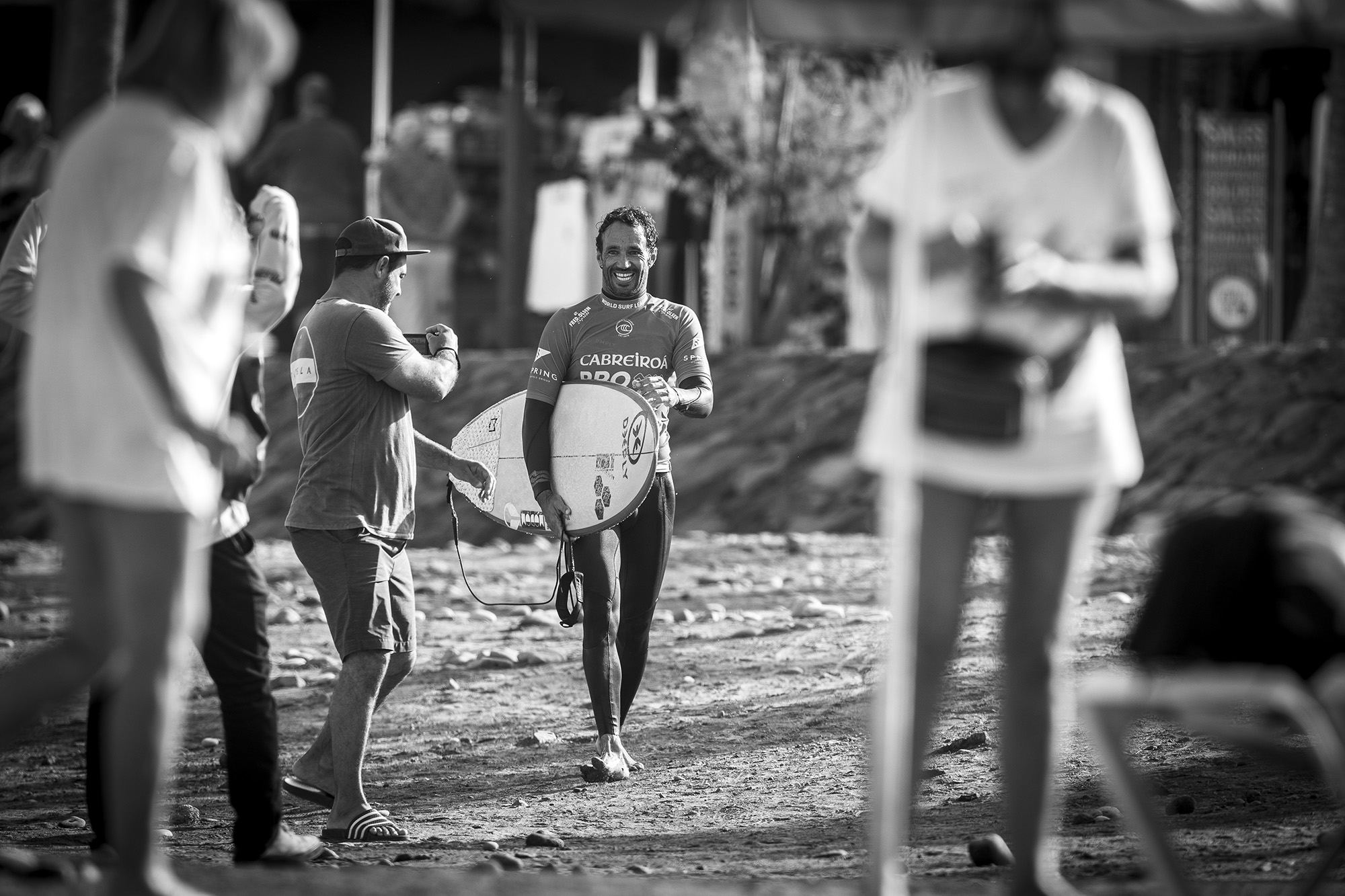 Second Time’s a Charm for Ado at Las Americas

Ariane Ochoa (EUK) and Pauline Ado (FRA) met in the women’s Final and this time both surfers had to earn their way since Round 1. 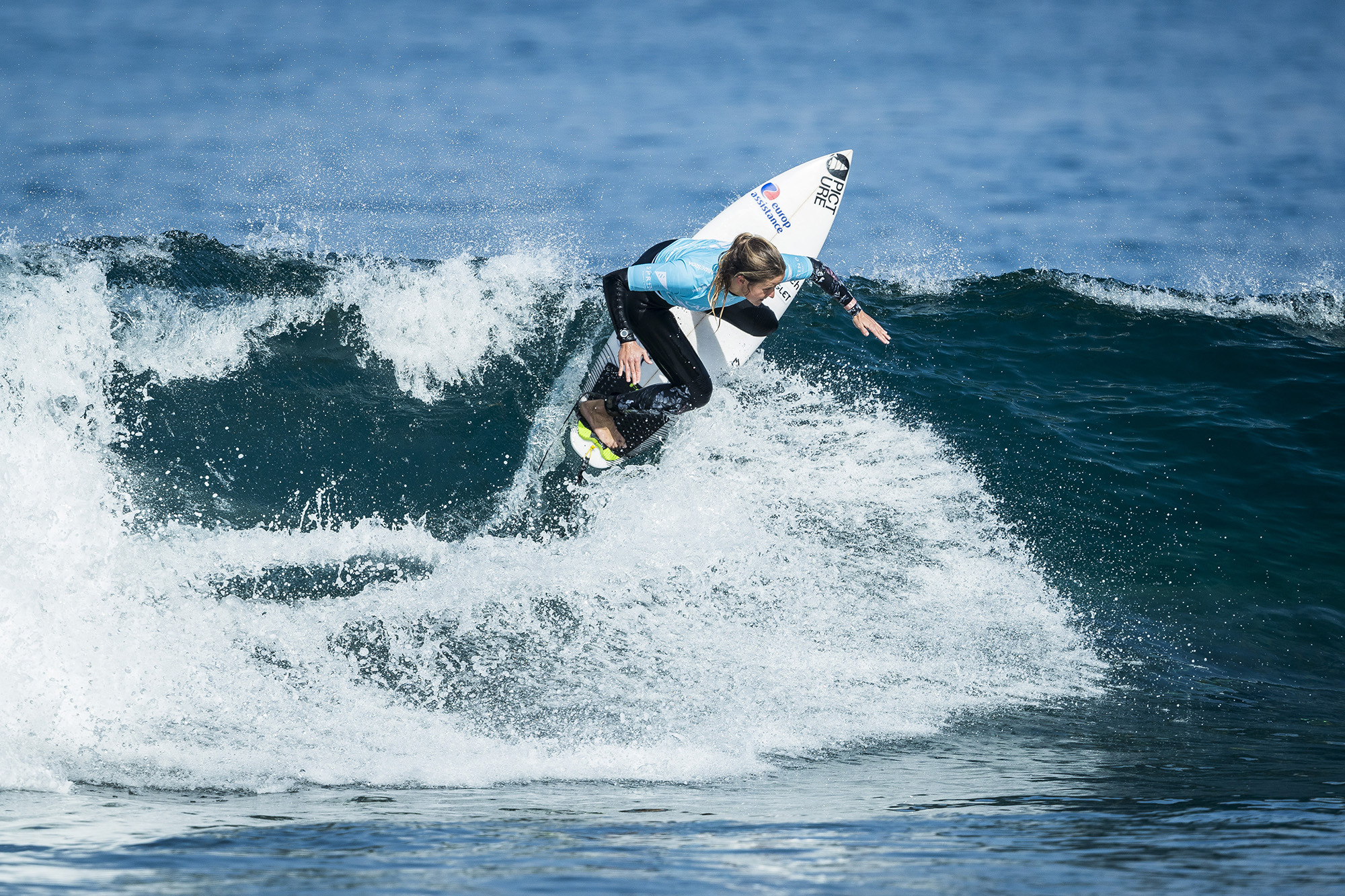 In a slow Final, both surfers got very selective and while the first couple of swings went Ado’s way, Ochoa started to put pressure on the French surfer with a great wave to get back into fighting distance. She quickly turned the heat, leaving Ado scouring the lineup for a mid-5. 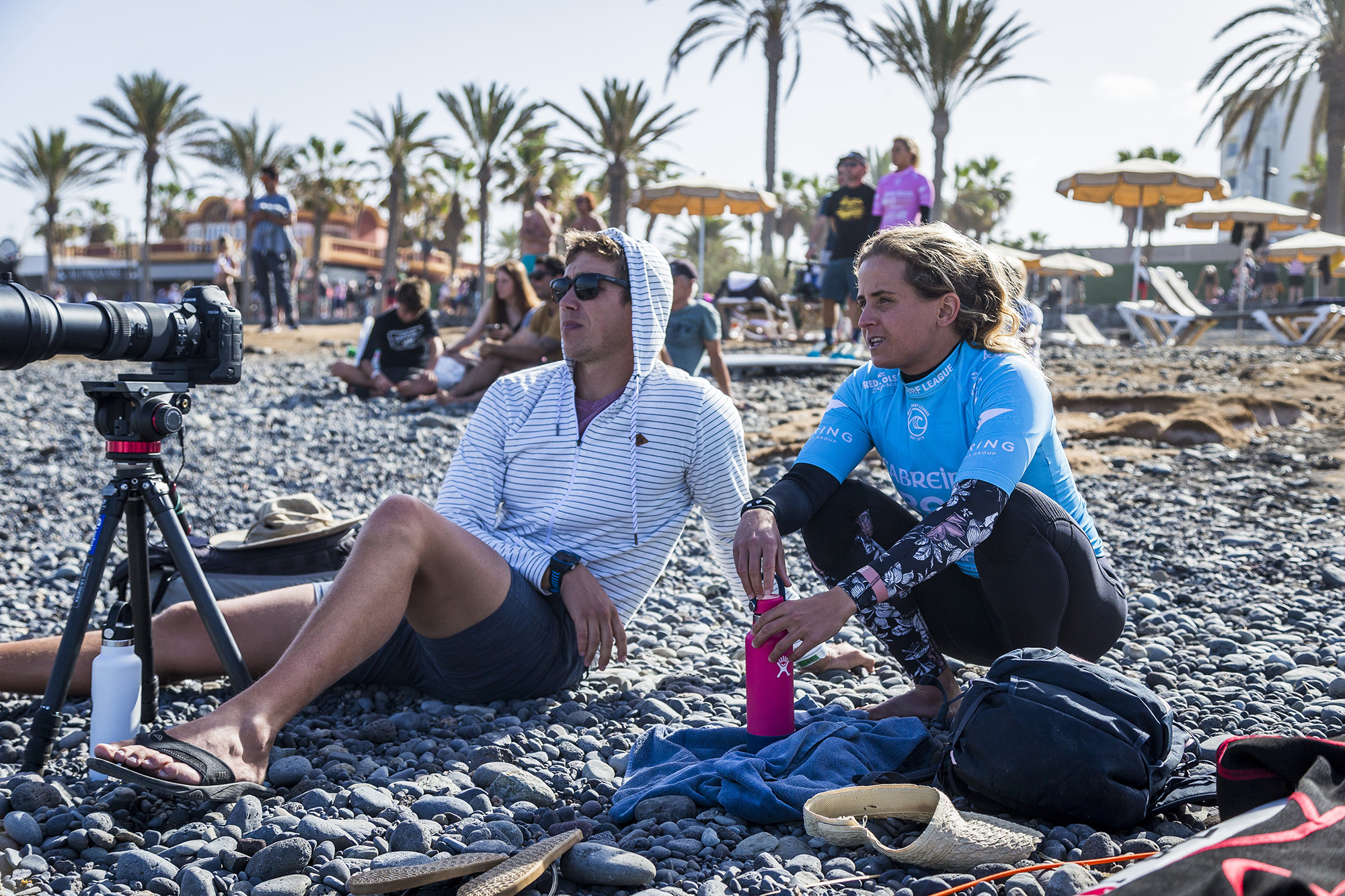 With two minutes on the clock, a beautiful set rolled in, giving both surfers the opportunity to improve their scoreboard. Both did, but this time Ado got the upper hand with an excellent 8.27 over Ochoa’s 7.50 to re-claim the lead. The Basque goofy foot got a final chance but was unable to turn in the high-6 required and Ado claimed the 2020 Cabreiroa Pro Las Americas title.

“I’m super happy and I feel lucky I got that really good wave at the end,” she said. “I wasn’t in a great place towards the end there and Ariane got some great scores, thankfully I gave everything on last wave and it was enough to take it. I’m really happy with my week here on Tenerife.”

Ado is a 10-time European champion (7 titles on the QS and 3 in the junior division) who spent 5 full seasons on the Championship Tour claiming multiple Quarter and Semifinal results at the highest level. Off tour for the past two seasons, the French powerhouse is highly motivated to get back up with the Elite Top 17 and join her compatriot Johanne Defay next season. A Round 4 berth in China and today’s victory should prove a great warm-up before Ado starts the real work next month in Australia.

“I placed second here two years ago so I really wanted to win that Final,” she added. “It really just came down to that last good wave we both had and I’m happy I got the score.”

Ochoa has been competing on the Qualifying Series since 2015 and has picked up two wins in Spain and South Africa. The talented goofy foot from the Basque Country was a standout on the European junior tour but is yet to make her mark on the bigger QS stage. Today’s runner-up finish will certainly spark a successive year ahead as she embarks on a third full season competing worldwide. 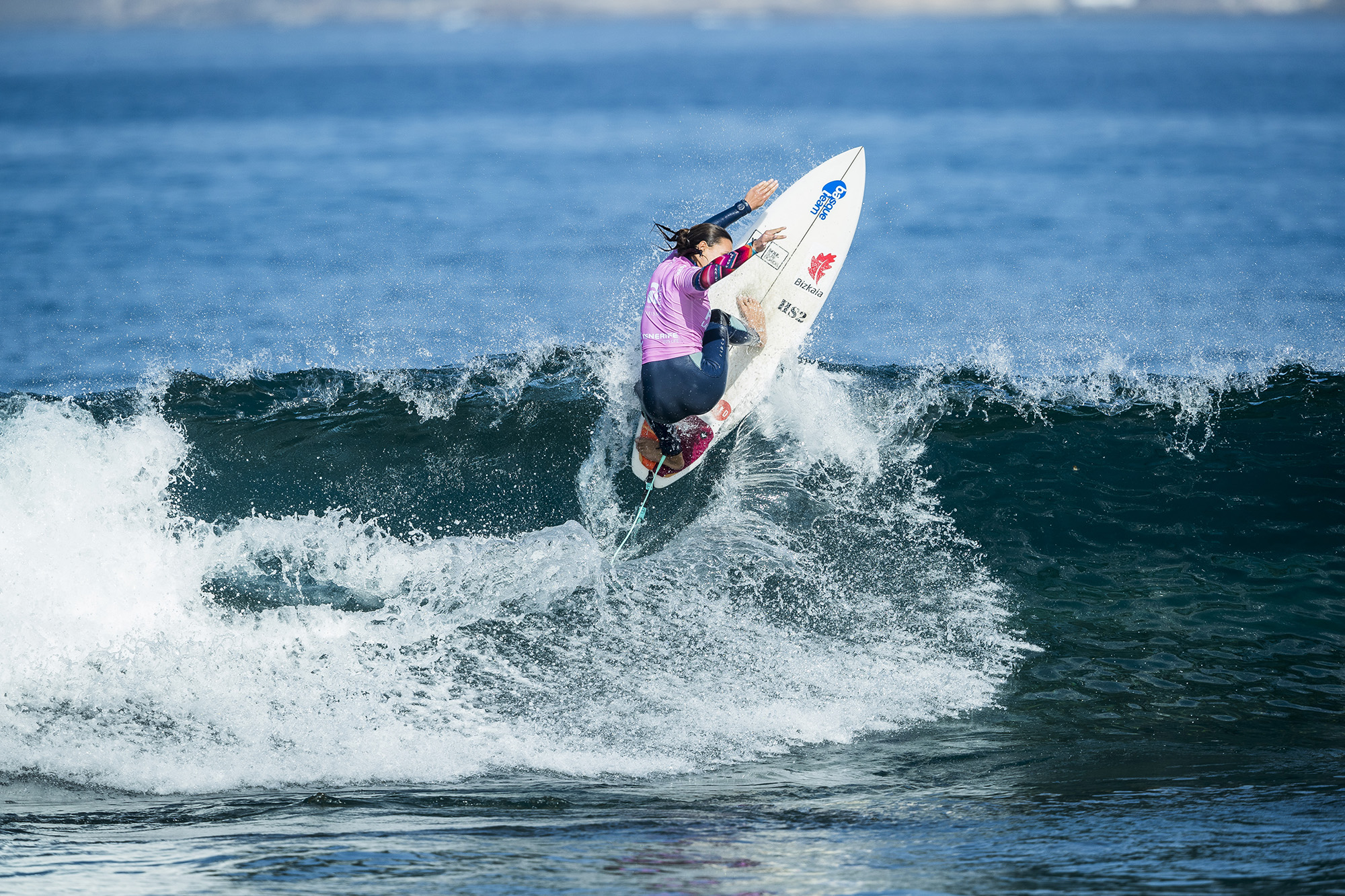 “I’m super happy to have made the Final here in Tenerife this year,” she said. “It’s been a really good contest for me, I’ve been building up since the first heat and finished with a super close Final with Pauline. I’ve really done my best and am happy with my performance, and I’ll just keep working until the next event.” 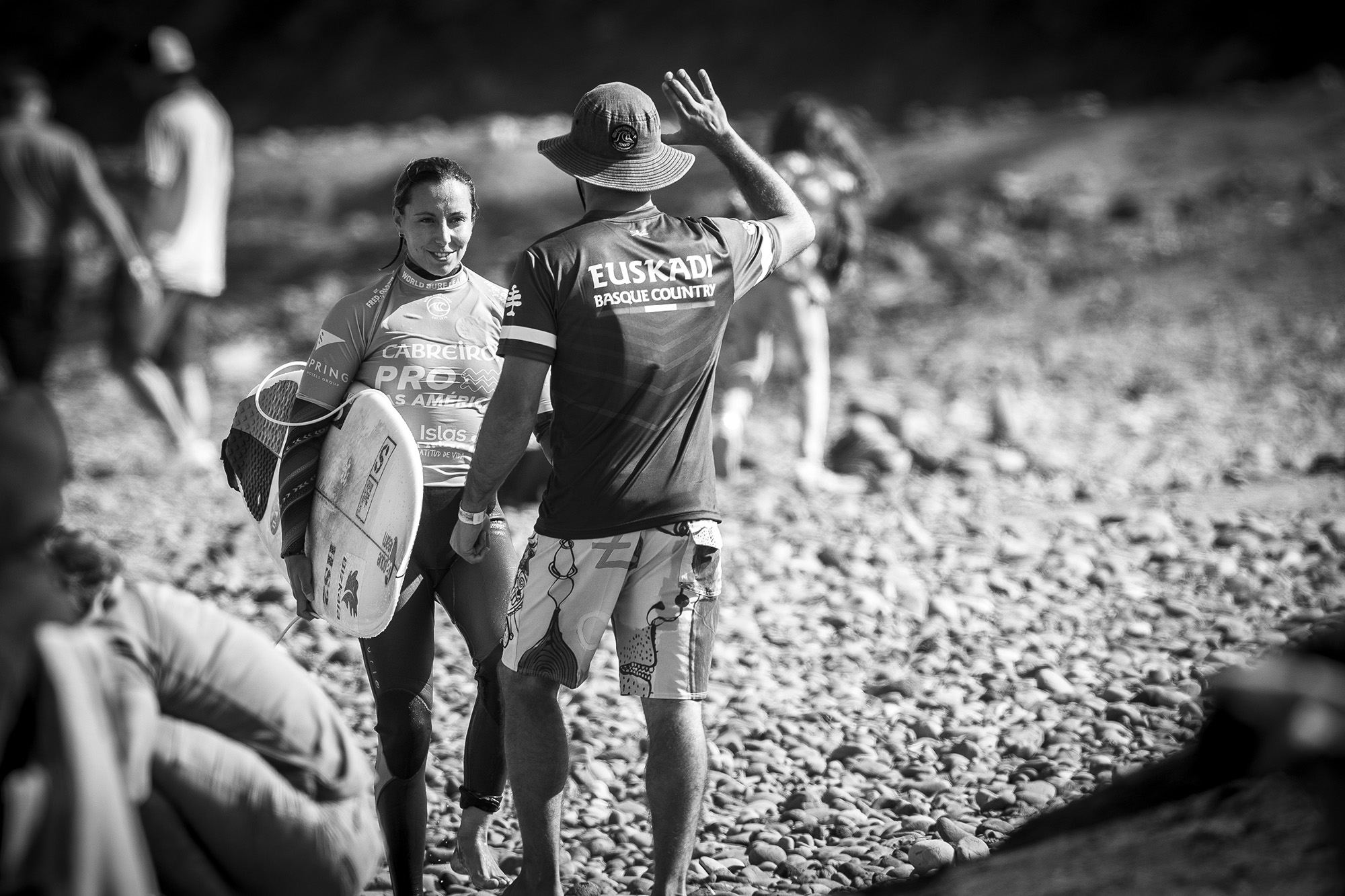 The third edition of the Cabreiroa Pro Las Americas started on Monday in spectacular conditions with over 160 athletes taking on the pumping lefts in Tenerife. The first couple of rounds witnessed the unlikely success story of Senegal’s Cherif Fall who dominated his first heats and only barely fell short in Round 3 behind eventual winner Larsonneur.

In the women’s event it was all about Yolanda Hopkins (PRT) who dropped massive scores all the way to a wave-starved Quarterfinal where she was eliminated by Bonvalot.

Daniela Boldini (CNY) and Timothee Bisso (FRA), the winners of the 2019 edition, were both eliminated much earlier than anticipated, Round 1 for the Canarian and Round 4 for the Frenchman who just came from a solid result in Morocco.

The men’s Canarian contingent all together put up a strong fight with Luis Diaz (CNY) reaching the Quarters and Yael Pena (CNY) Round 5, while in the women’s event, no surfer from the Atlantic archipelago made it past the second round of the competition.

With the completion of the Cabreiroá Las Americas Pro Tenerife, the European rankings have evolved, here is the new current Top 5:

Surfers will now have five weeks to prepare for the next event on the 2020 European Qualifying Series, the SEAT Pro Netanya. 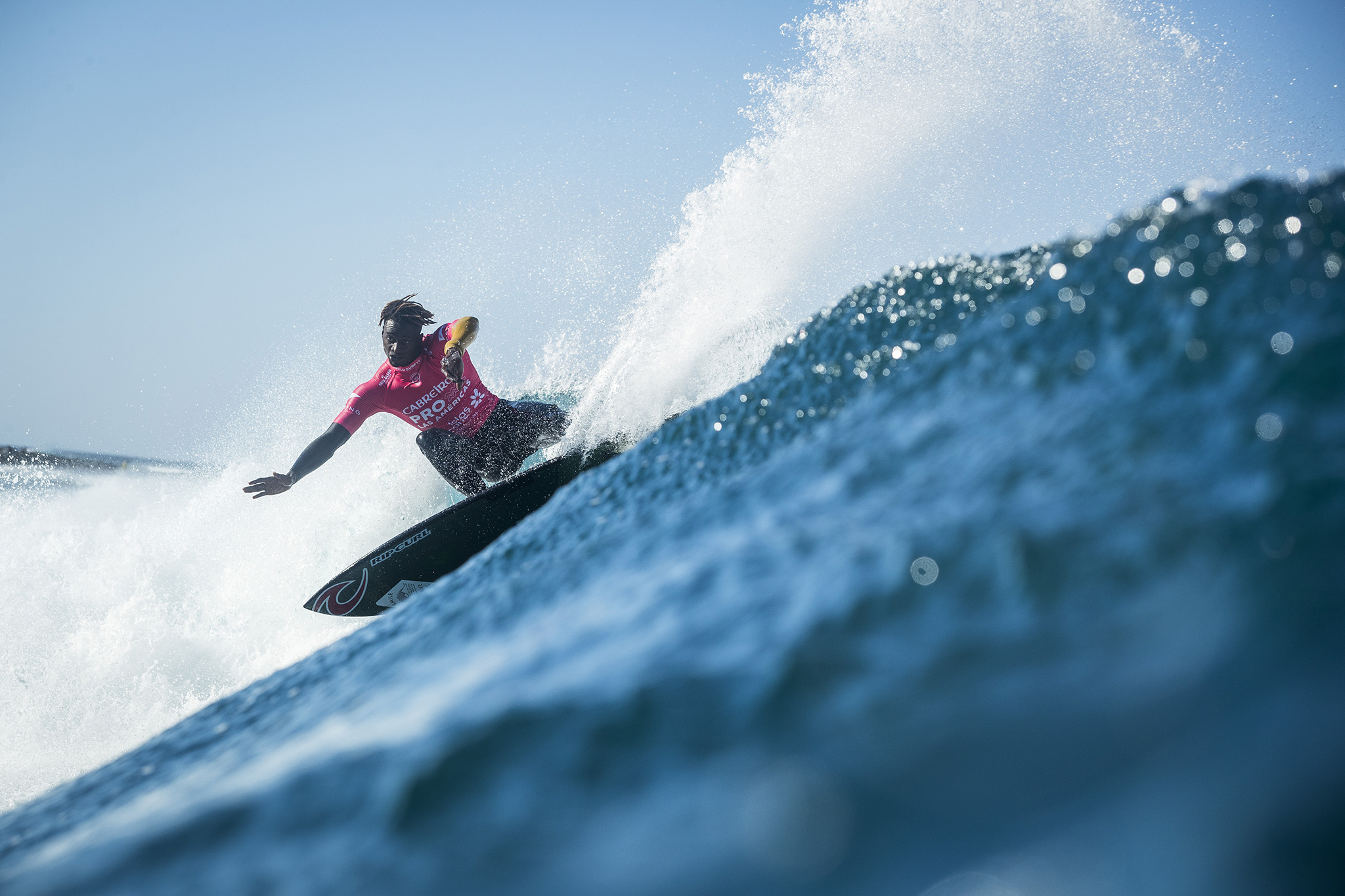 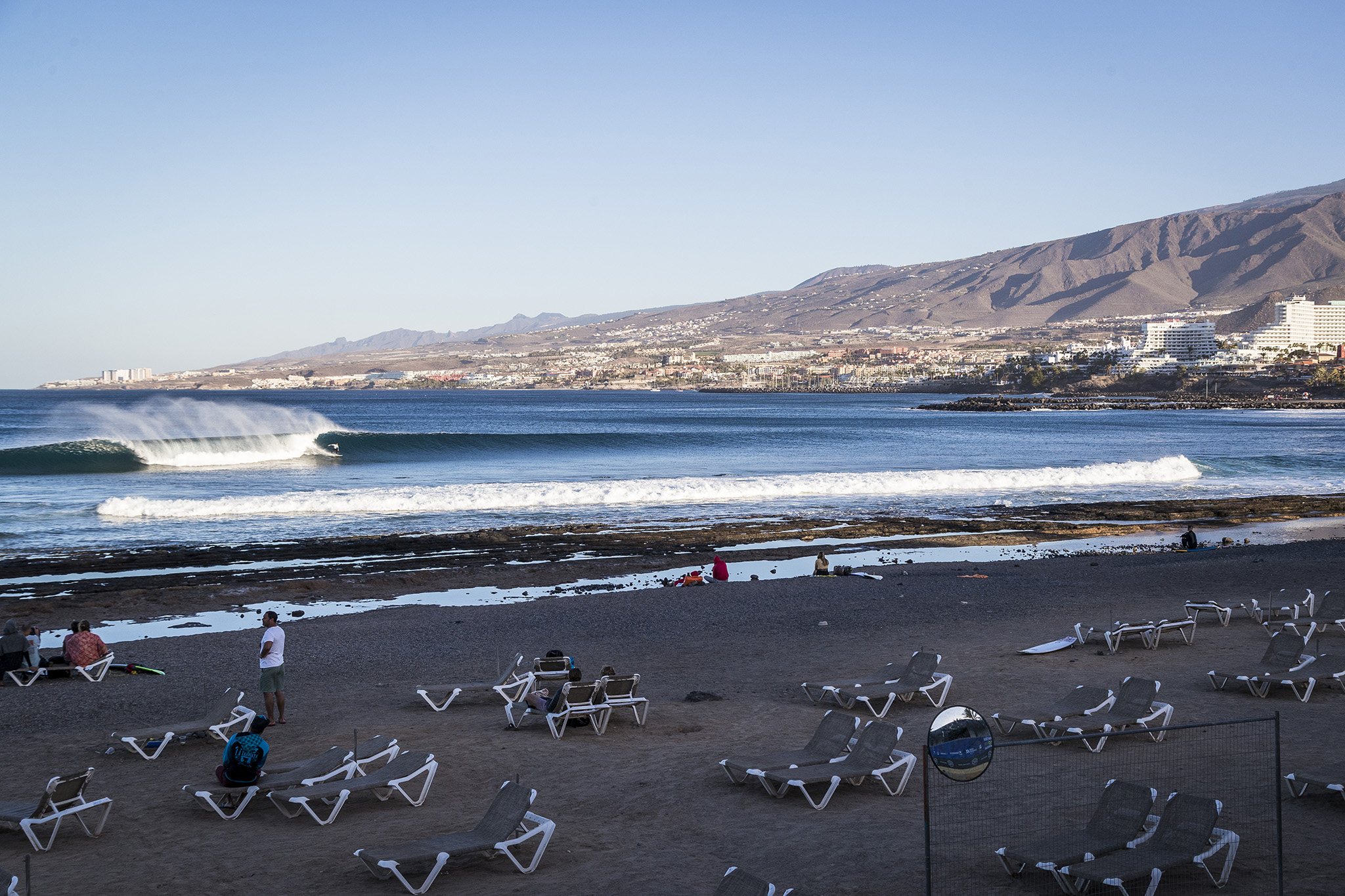 Line Up during day 1 of Cabreiroá Pro Las Americas 2020