Paige Alms and Billy Kemper charge to victory at the Jaws Challenge. 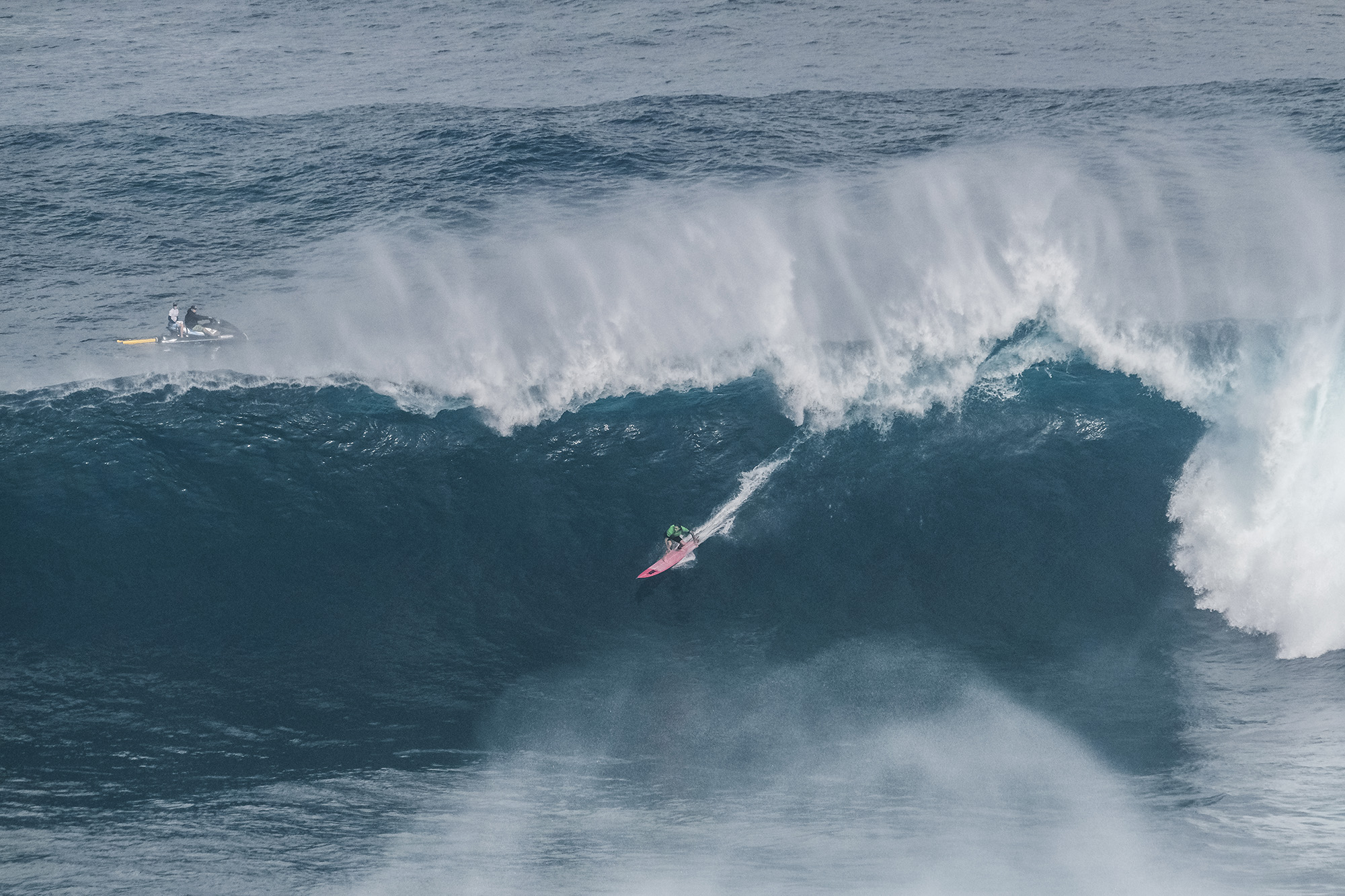 Tom Lowe sending it for the UK crew. Photo by Keoki Saguibo/WSL 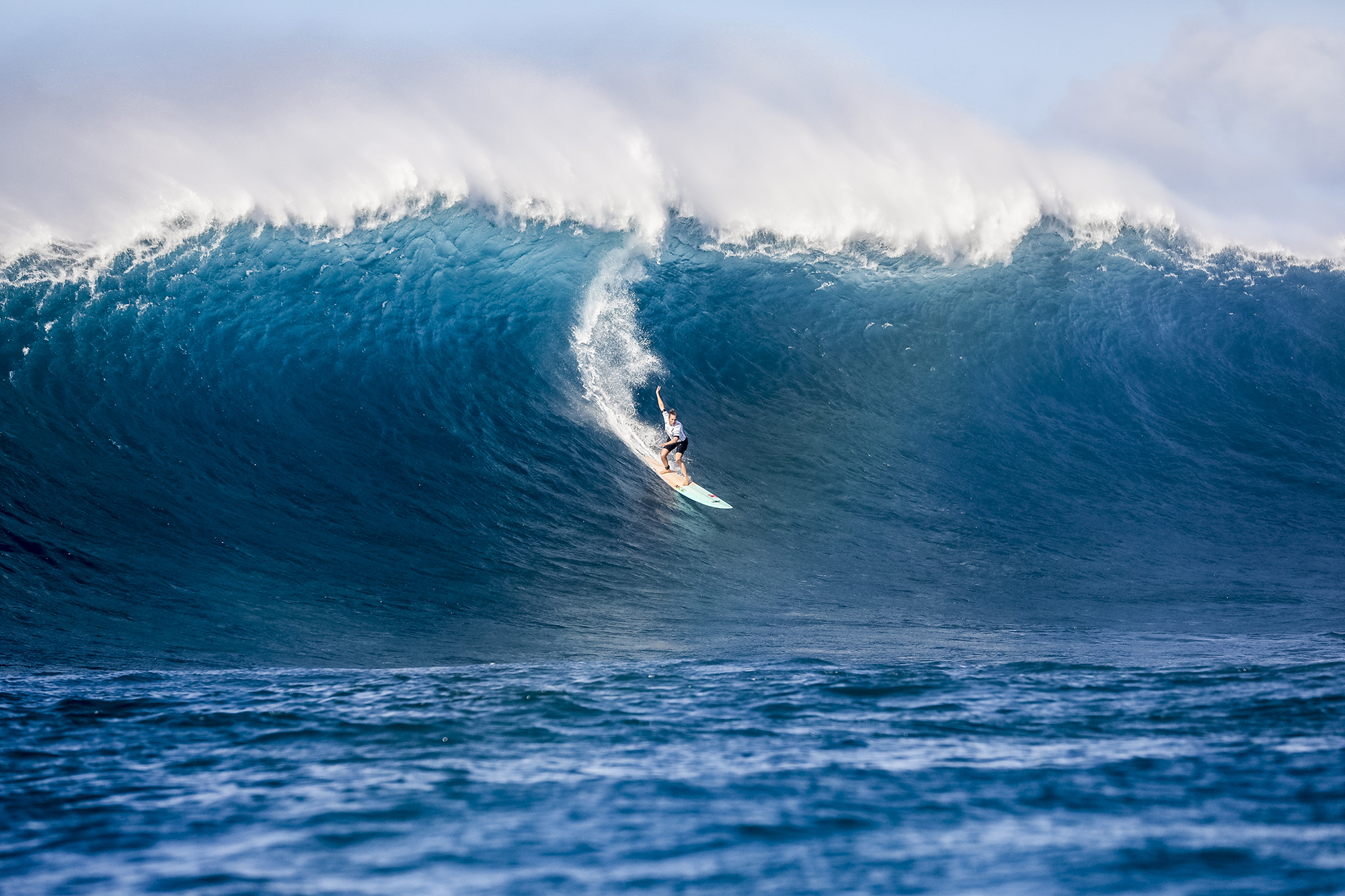 Paige Alms of Hawaii winning the 2019 cbdMD Jaws Big Wave Championships for the third time in her career at Peah’i. Photo by Keoki Saguibo/WSL

The Maui natives swept the event for a second time in their respective careers with Alms earning a historic third victory and Kemper an unprecedented fourth Jaws Challenge title – defending his 2018 win.

“I’m so happy and stoked – pretty excited for a cocktail (laughs),” said Alms. “It was some super challenging conditions today. As soon as I paddled out in my first heat the wind was here and I knew the Maui glass was on. To do it three times is all a blur and I’m pretty baffled at the moment. I try to make smart decisions out here and I obviously got pretty beat up at the end of that first wave. I try and pick the good ones, I’m not out there to prove anything to anyone except myself. It’s the ultimate feeling being on a giant wave, it’s when I feel the most alive and so it’s the double-edged sword. You’re putting your body and life on the line to ride these wave but when you successfully ride one nothing beats it.”

Paige Alms and Billy Kemper take the honours on a cracking day at Jaws. Results and photos here: https://www.carvemag.com/2019/12/paige-alms-and-billy-kemper-charge-to-victory-at-the-jaws-challenge/

The ocean came to life after a slow 20-minute start that Maui’s Alms was able to scratch into and drop down the critical face before being swallowed by a mountain of white water. The 2016 and 2017 Jaws Challenge victor sustained a hamstring injury in the process but grabbed a backup jersey and returned back to the lineup. Fellow Maui native and one of the crowd favorites Annie Reickert made her incredible Big Wave debut at just age 18 and stunned those in attendance to earn a third-place finish behind runner-up Felicity Palmateer (AUS) who threw herself over the ledge into death-defying drops to put on a showcase throughout her performances.

“I think (showing up early) is partially a good thing and partially a bad thing,” said Reickert. “I showed up and had hours to watch and study the surf and get advice from everybody. But the more you’re out here the more the nerves get to you and get into your head so it was all just about paying attention to what the sets are doing and mentally staying prepared for what you’re about to go do.

“I’m honored to be out here. I didn’t know what to expect and of course my goal was to make it to the Final and just give it my all as well as share the water with these inspirational people like Paige (Alms) who’ve I’ve always looked up to.” 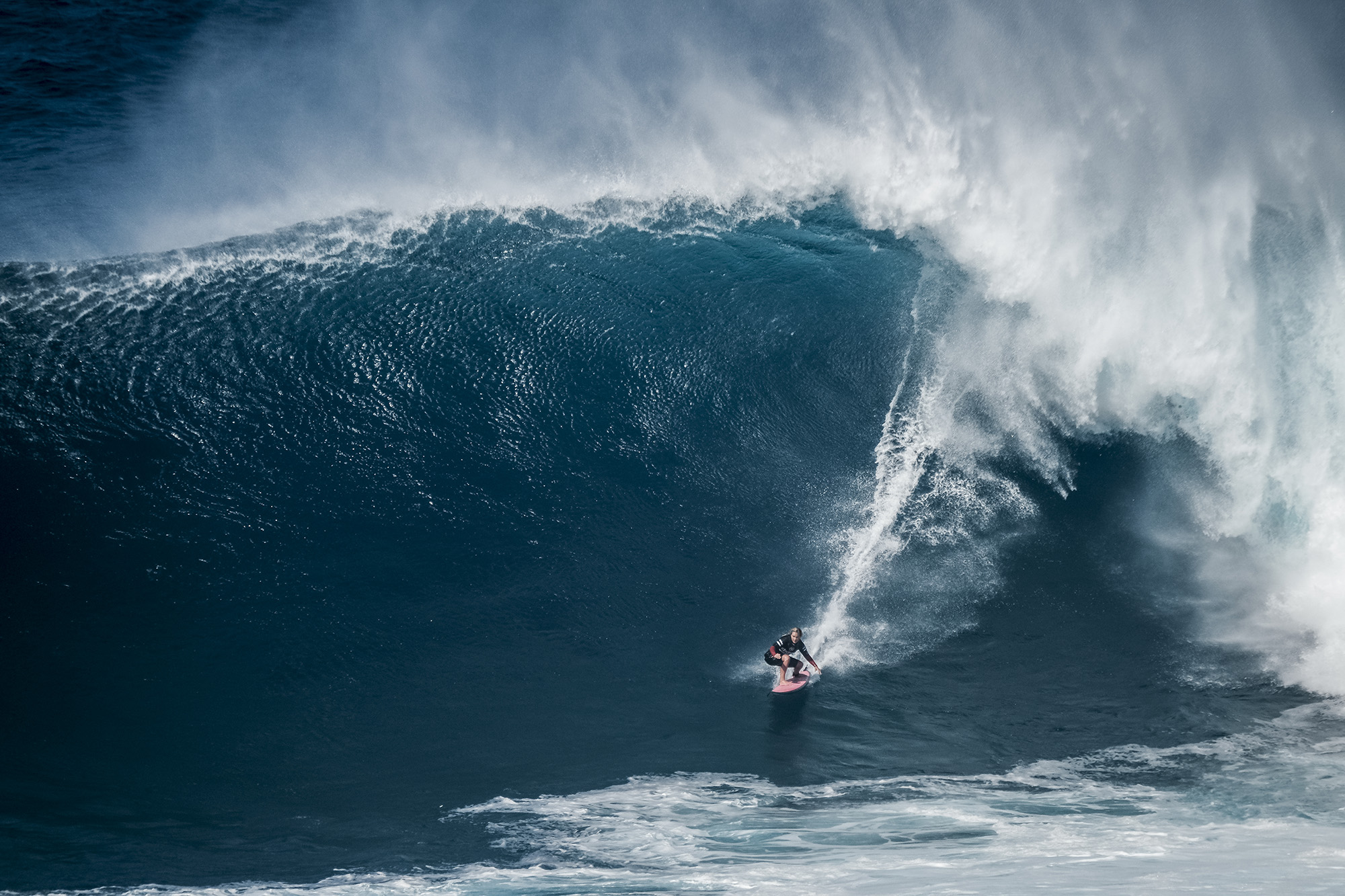 The men’s side also proved historic as Maui’s own Kemper claimed an unprecedented fourth victory, going back-to-back once more, at his home break of Pe’ahi – winning the event in 2015, 2016 and 2018 previously. The 29-year-old put on a showcase at the Billabong Pipe Masters in Memory of Andy Irons and carried that momentum into a dominant performance with the day’s highest heat total, a 21.26 (out of a possible 30), in the Final to defend his title. 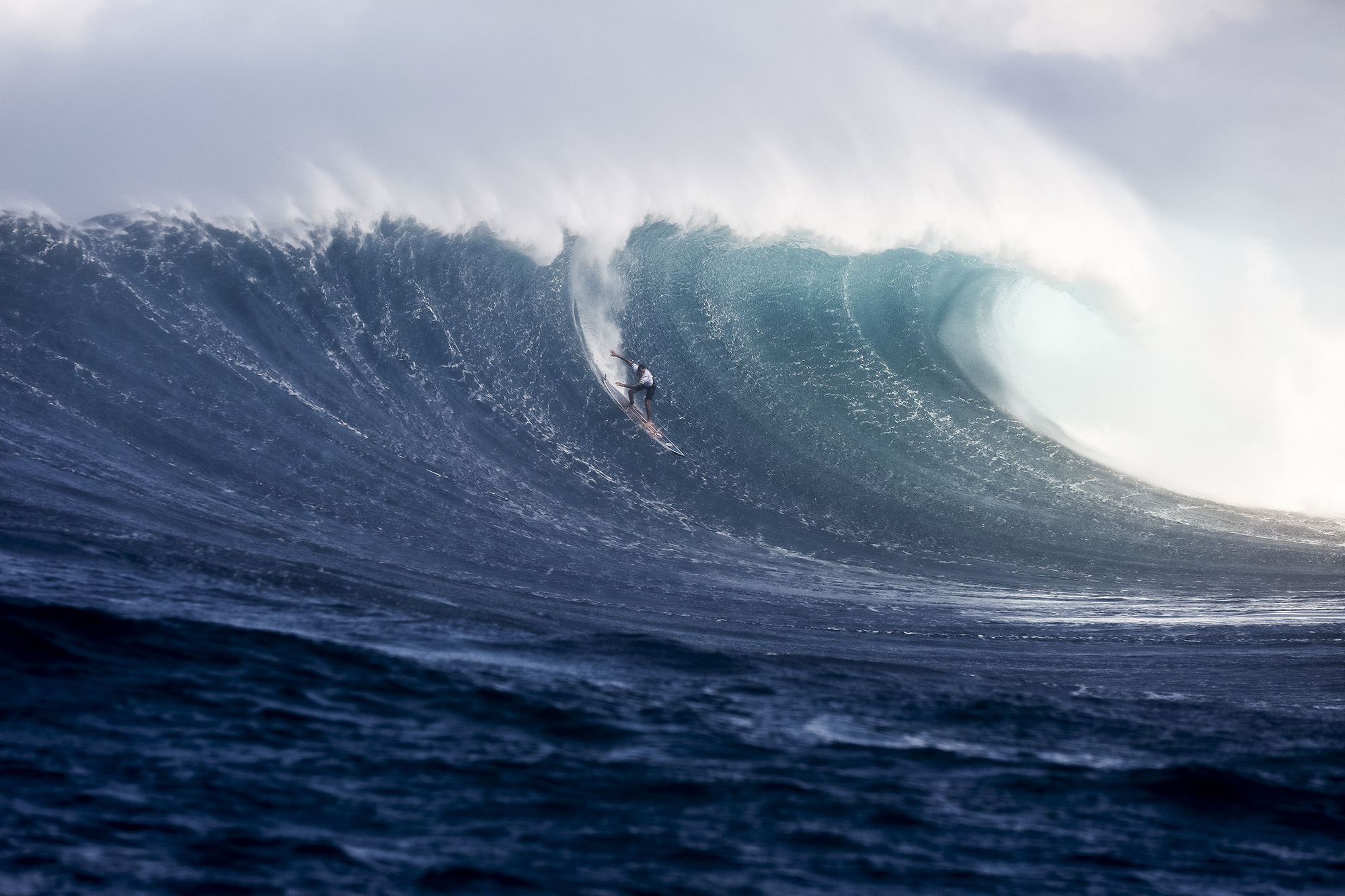 “I feel so amazing right now, I’m over the moon,” said Kemper. “It felt like such a tough dogfight leading all the way to the Final. Every morning I wake up early and I work hard and every sacrifice, time I’ve taken away from my wife and kids, it’s all for this right here. This is my pride and joy. I leave blood, sweat and tears out at Jaws. This is my backyard and I’m very territorial (laughs).

“I bring my mom everywhere I go, I brought her out there with me today and she kept me safe and my brother Eric I love you guys. I wouldn’t be who I am today without them. This is a really special one after the dogfight. I had a rough Triple Crown after I felt like I performed really well but was just let down in the way things went but what can I say, I did what I wanted to do and this was just my day. I told myself when I went out there in this Final there’s no way I was coming home with second place.”

Kemper heaved himself over the ledge of the Final’s first set and locked into a massive barrel which he was able to find an exit from to earn a 7.83. But, he had fellow Maui natives, former Jaws Challenge winner Ian Walsh (HAW) and three-time Finalist Kai Lenny, along with big wave chargers Makuakai Rothman (HAW), Nathan Florence (HAW) and Lucas Chianca (BRA). Lenny stole the lead from Kemper momentarily with his signature power carves on the massive canvas of Pe’ahi’s wave face before Kemper’s near-barrel make earned him a 5.60 for his commitment and wave size. Walsh’s last effort witnessed the island native make an incredible drop down a steep face and narrowly escape a cascading wave behind him to earn a 7.00, just 1.23 short of the requirement. 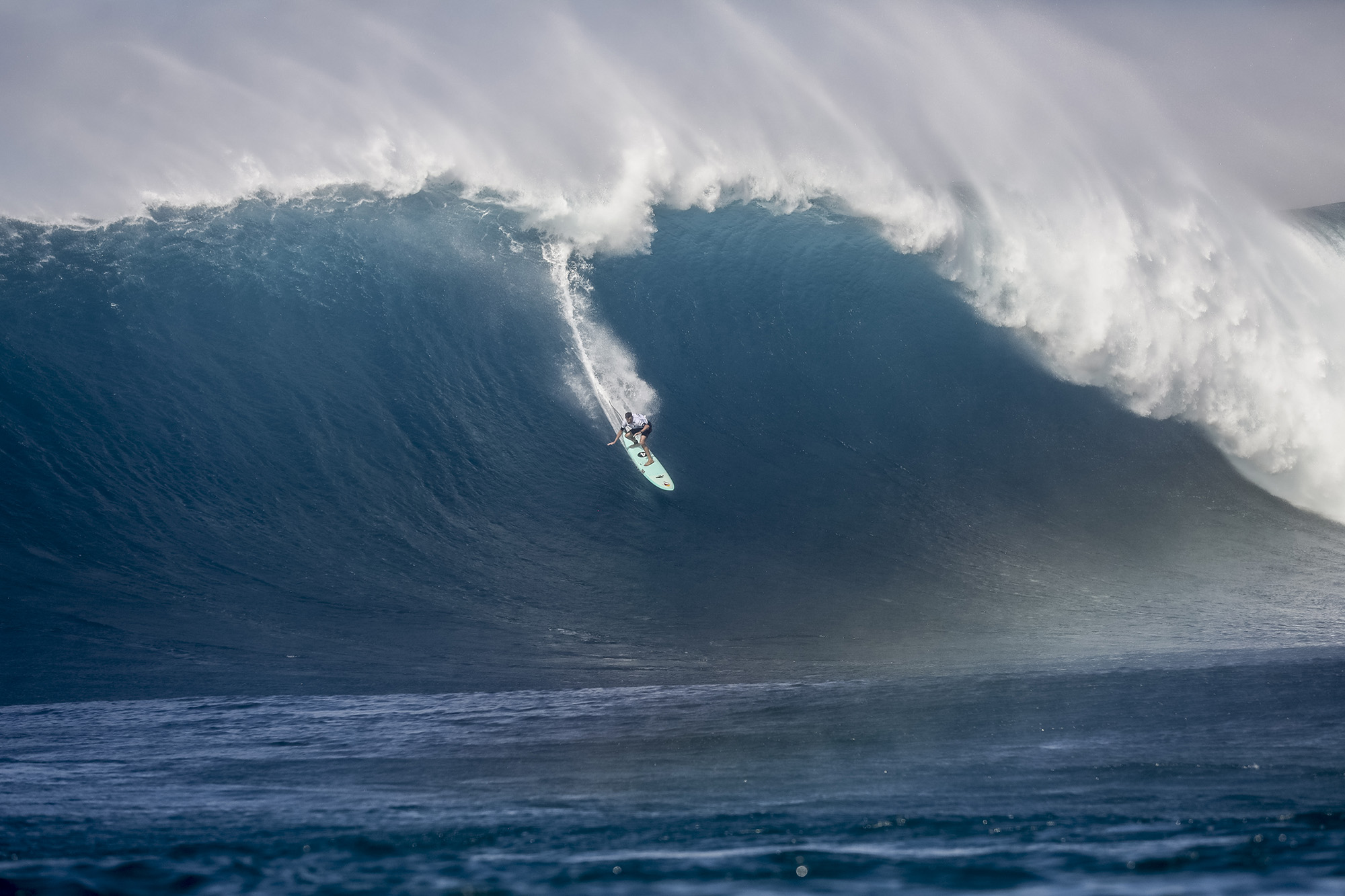 “Once the clock starts it’s definitely a different mindset and for me it’s just being on the mental page of ready to send it,” said cbdMD Jaws Challenge Big Wave Championships runner-up Walsh. “Just try to focus on your positioning give yourself an opportunity to make the wave. I think toward the end I start talking to Jaws and asking for a big, black barrel but other than that I’m just staying in the moment and being ready for whatever happens right then. Some of them weren’t approachable and it’s more of the wave catching you than you catching the wave.”
The cbdMD Jaws Big Wave Championships is proudly supported by cbdMD, Michelob Ultra, Red Bull, and Alexander & Baldwin. 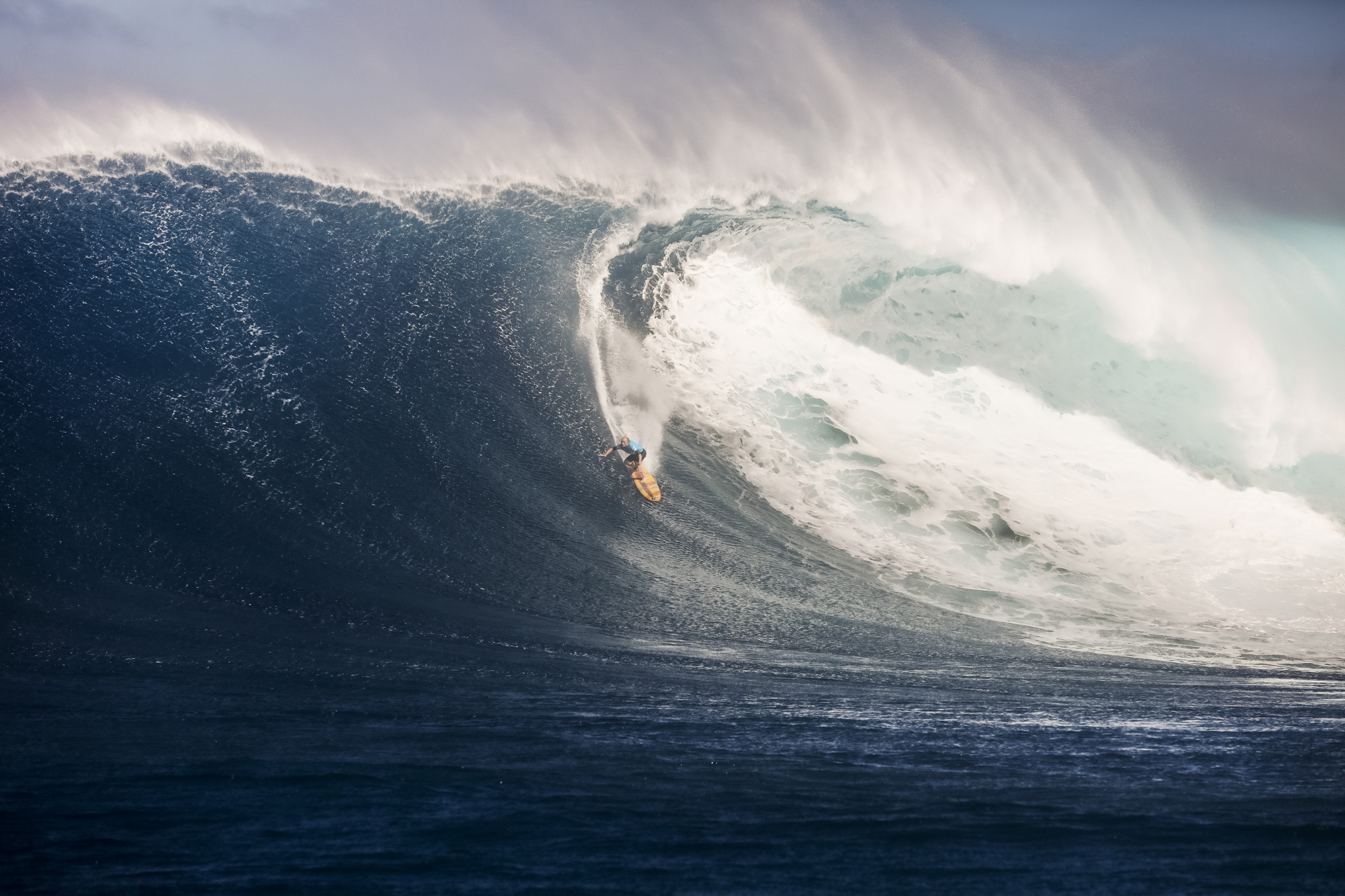 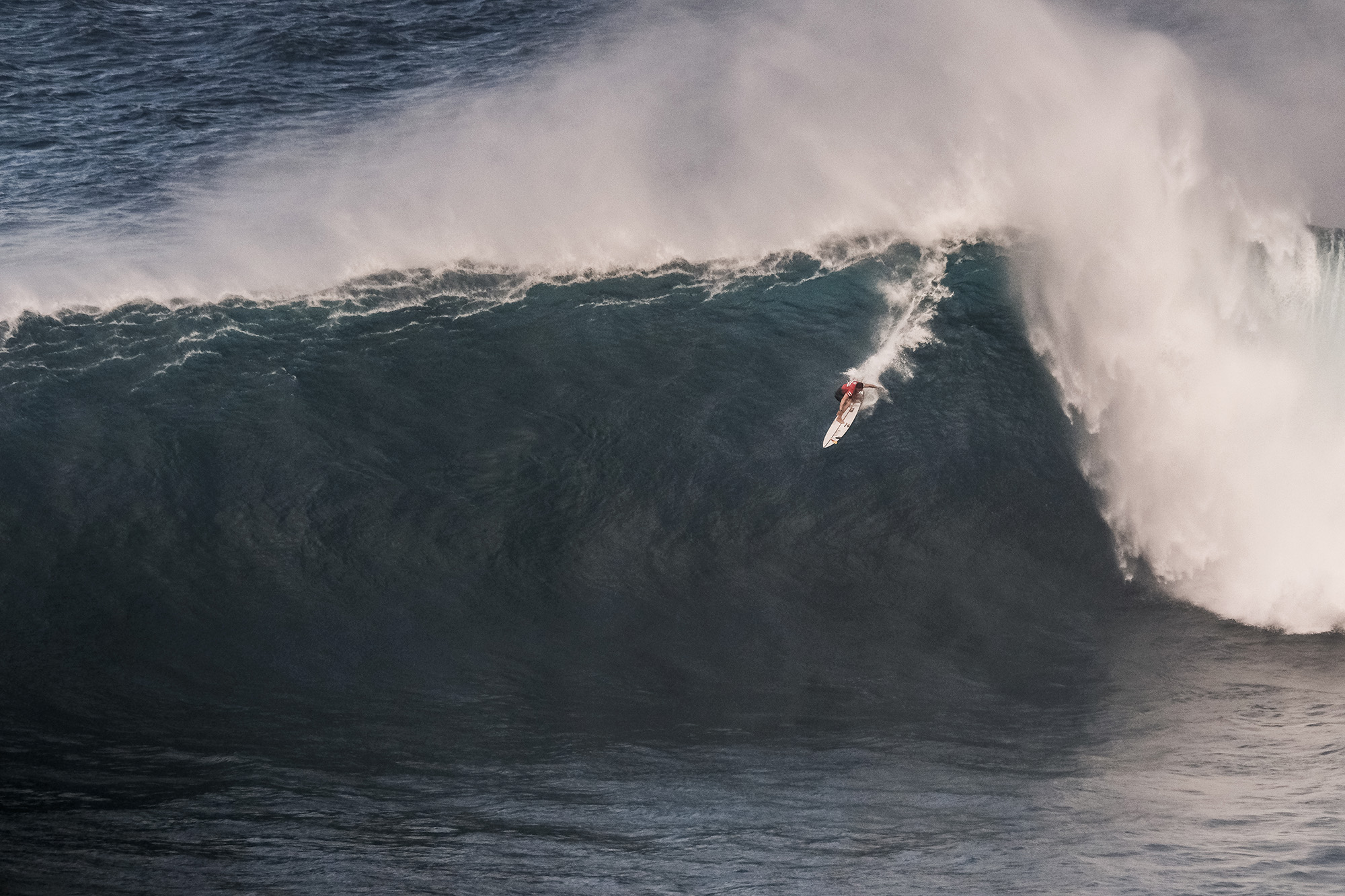 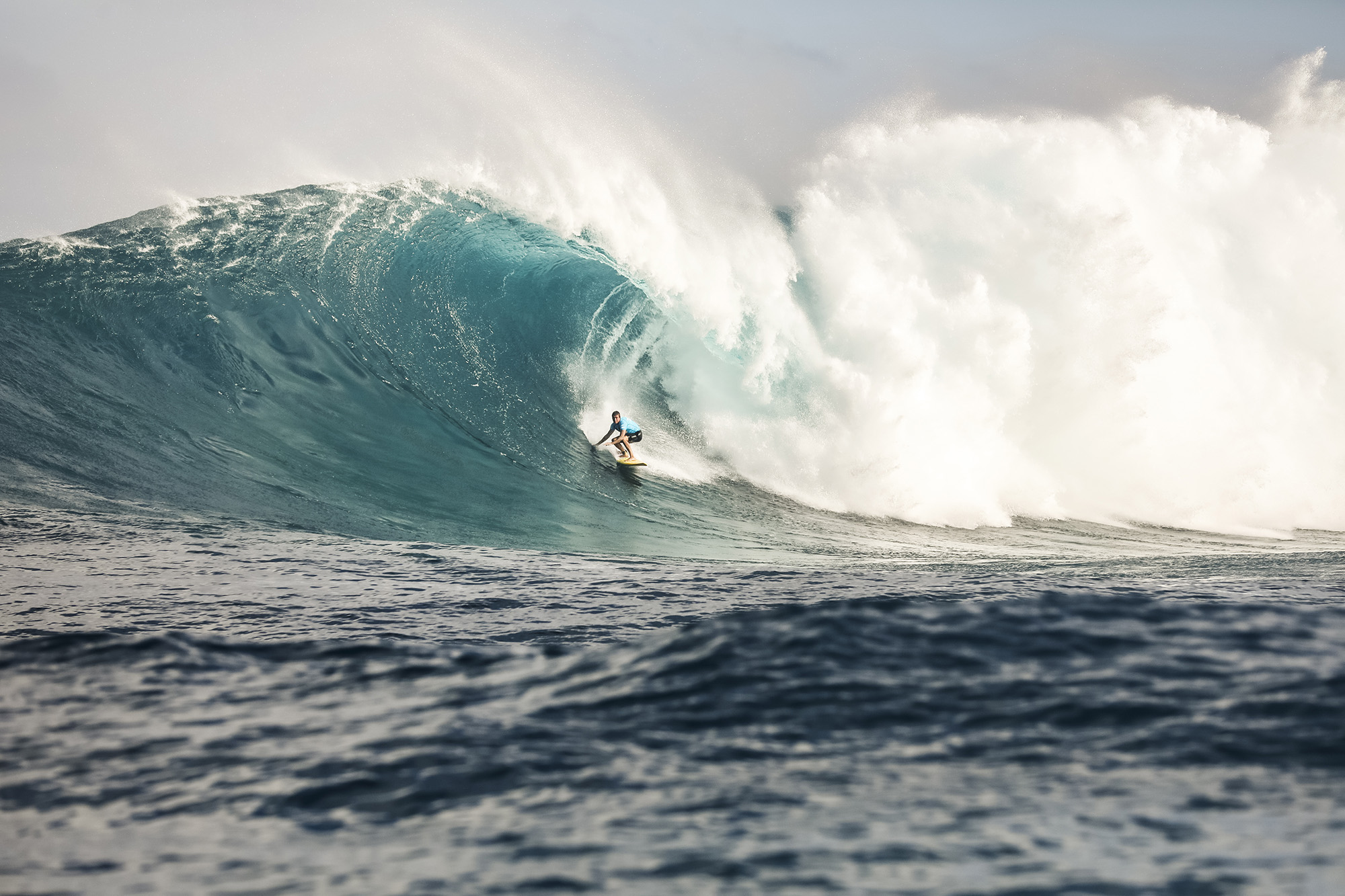 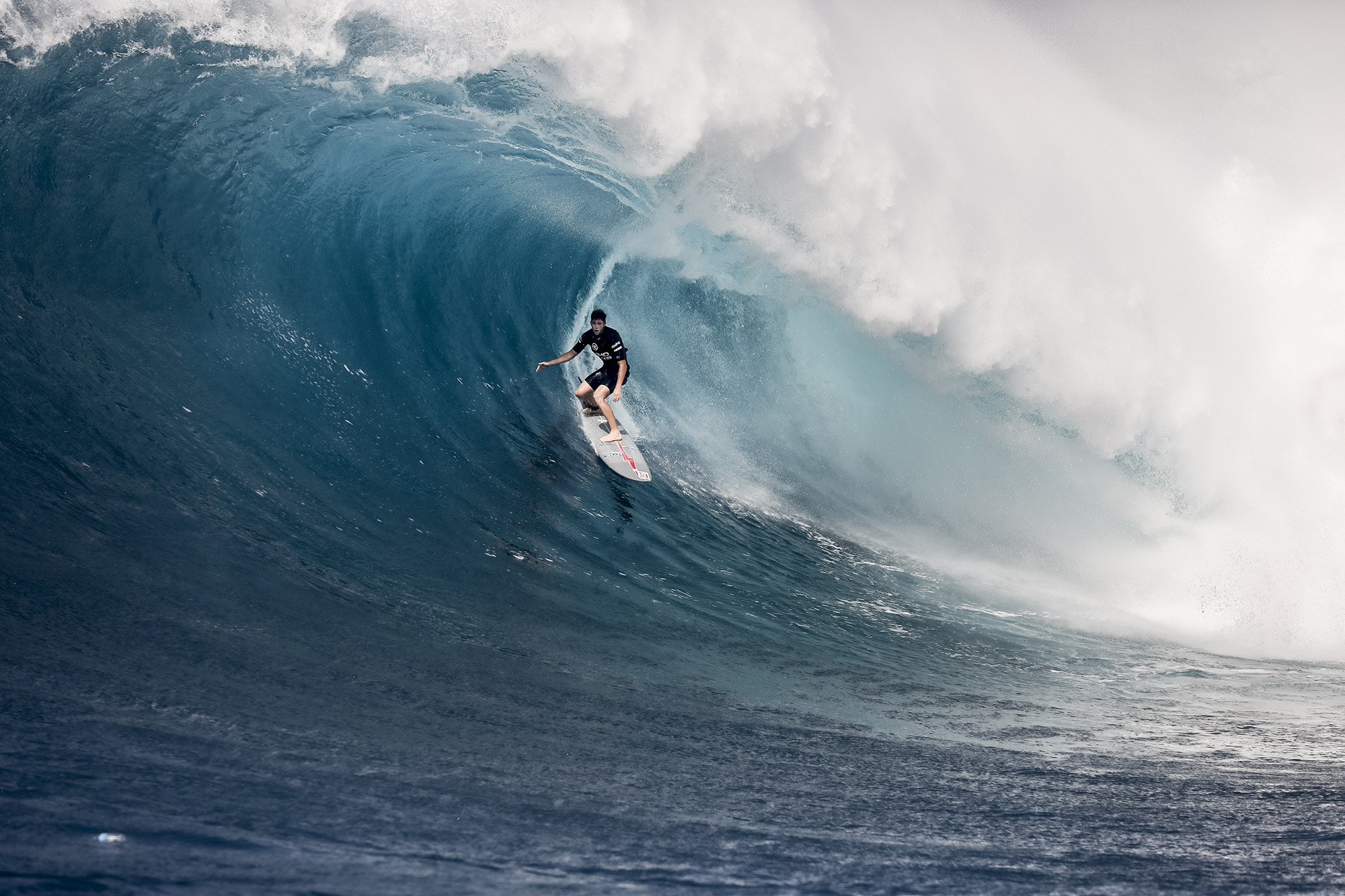 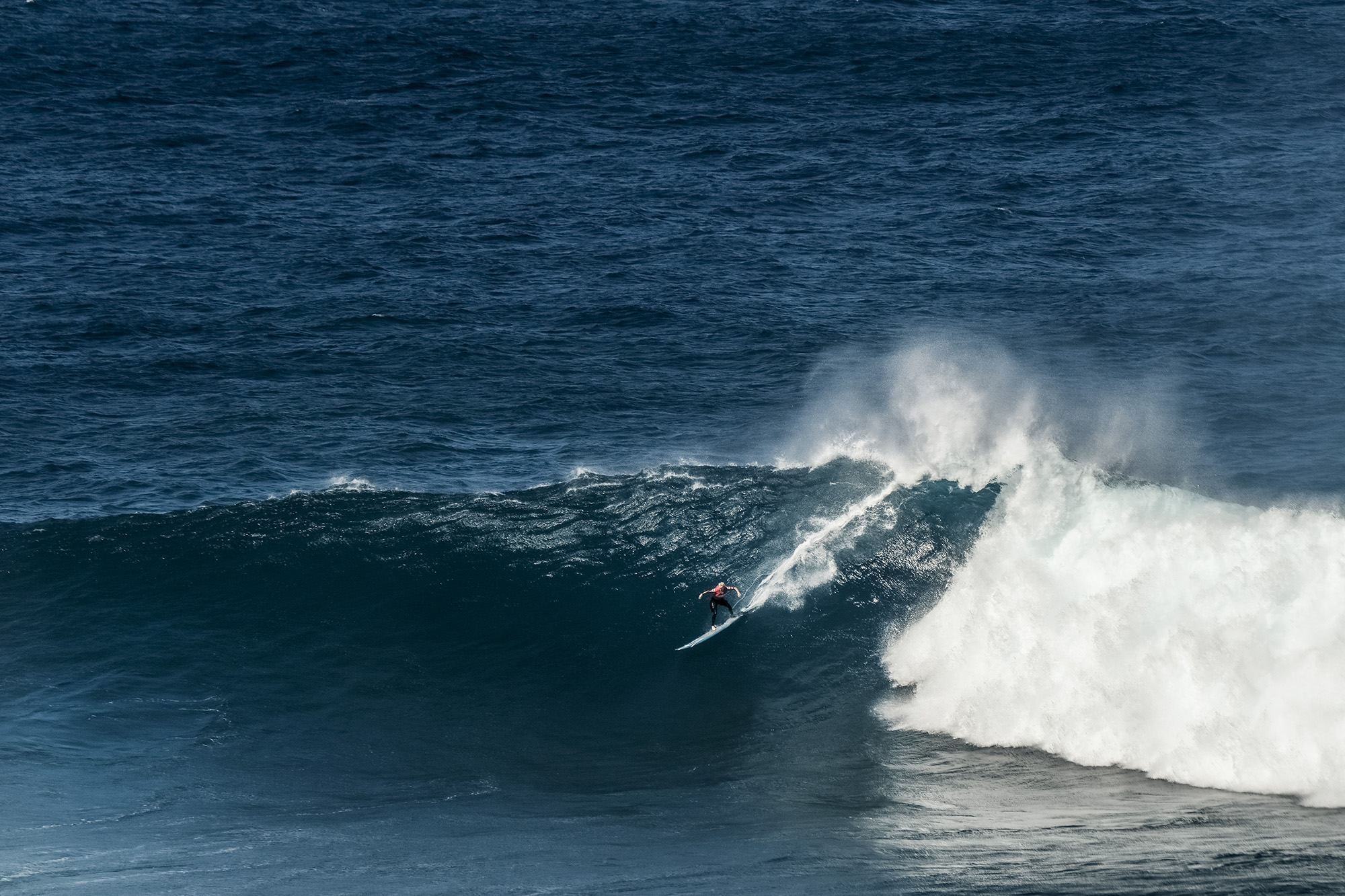 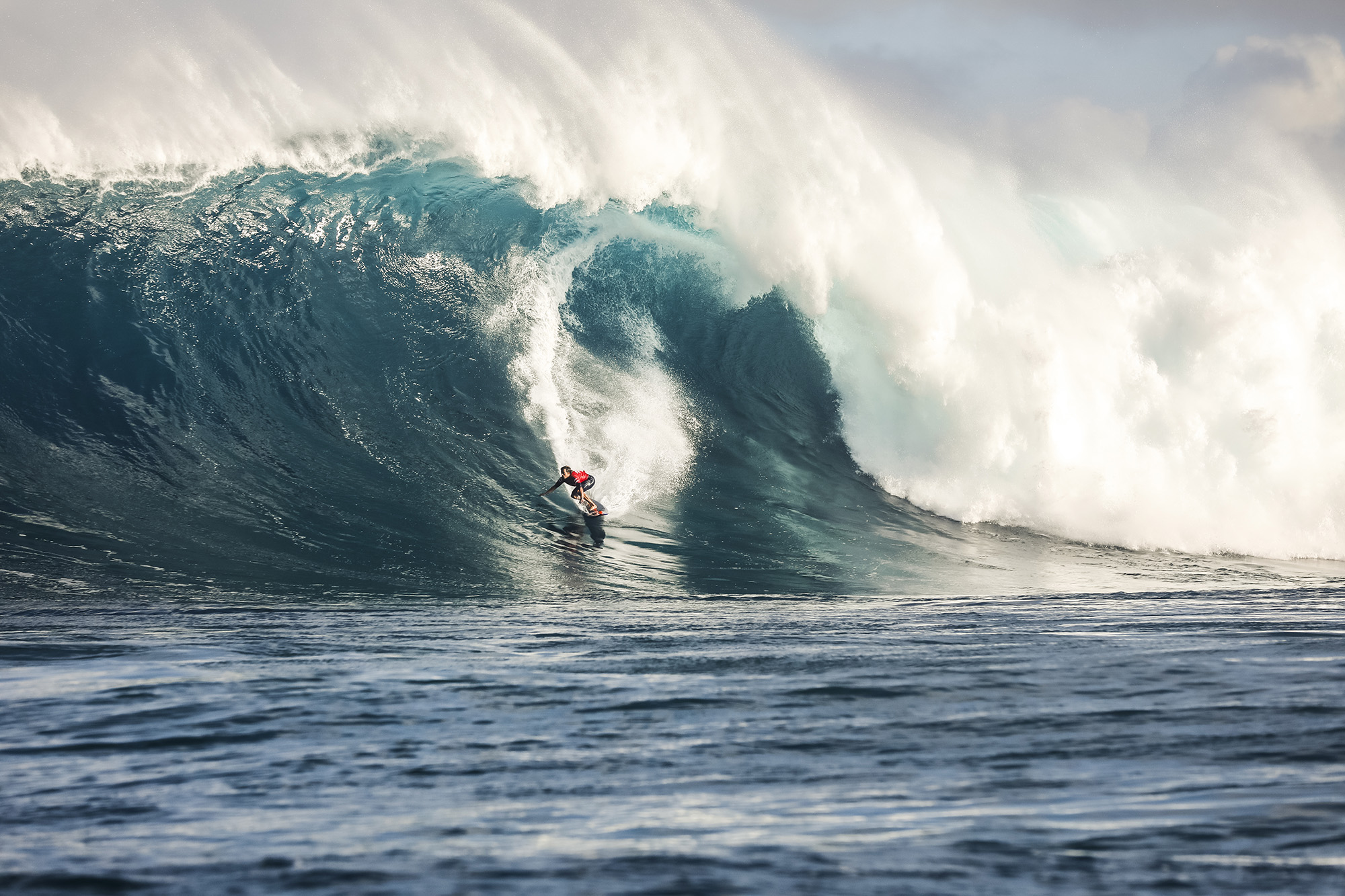 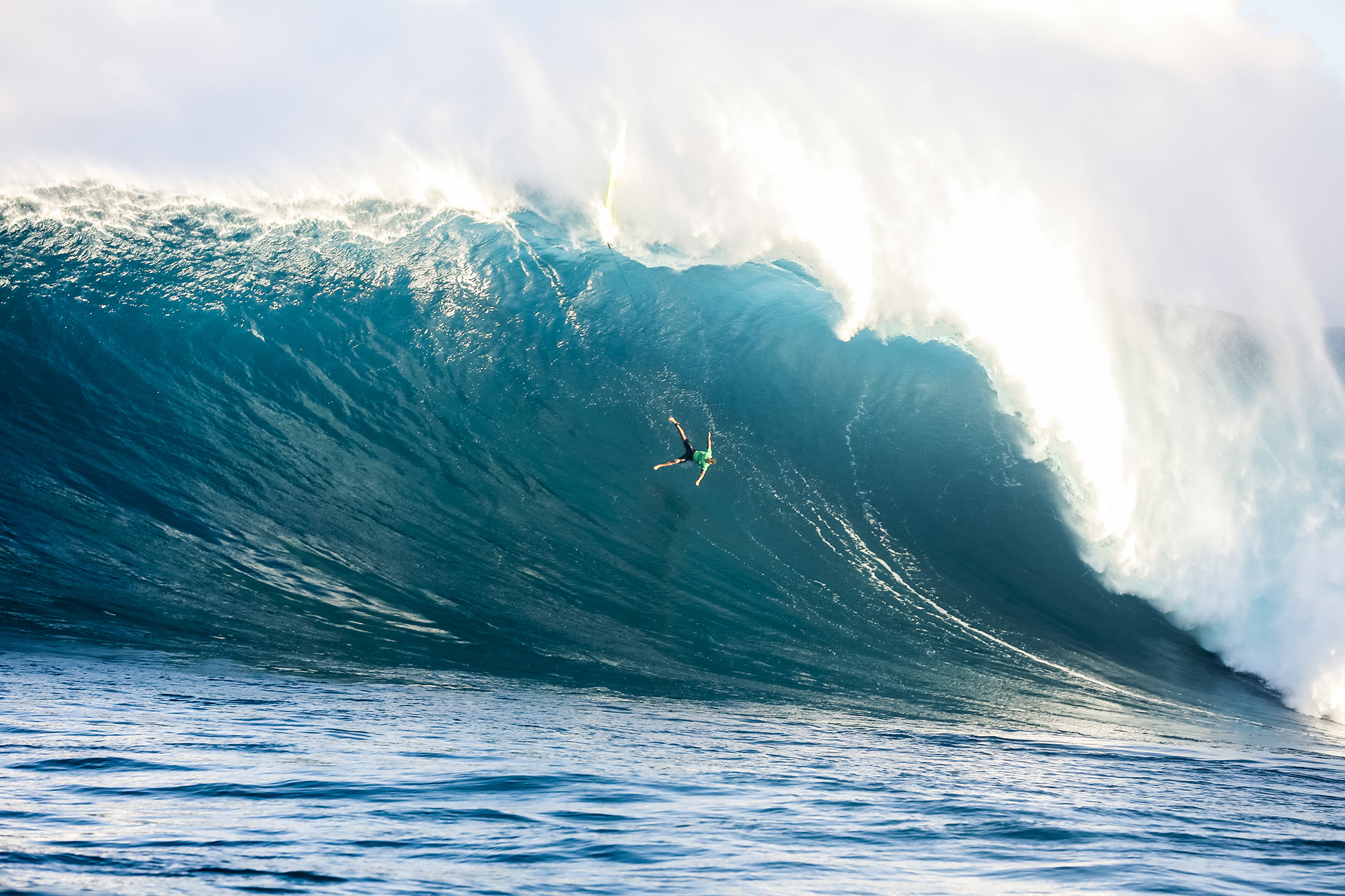 Jamie Mitchell and one of the wipeouts of 2019. Photo by Cait Miers/WSL.