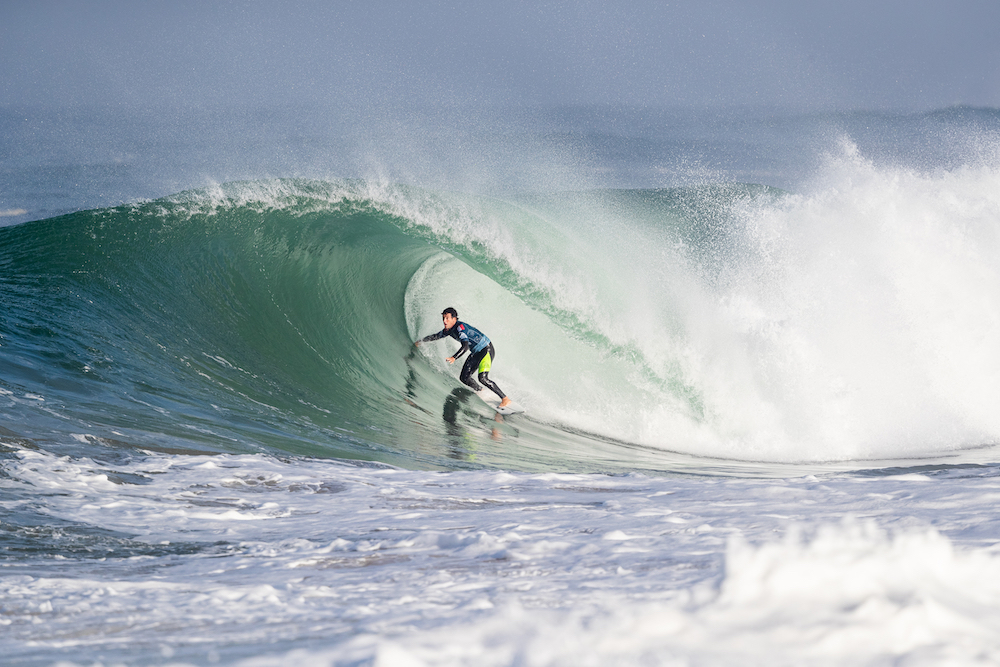 HOSSEGOR, FRANCE – OCTOBER 7: Jeremy Flores of France advances to Round 4 of the 2019 Quiksilver Pro France after winning Heat 2 of Round 3 at Le Graviere on October 7, 2019 in Hossegor, France. (Photo by Damien Poullenot/WSL via Getty Images)

Quiksilver wildcard Marc Lacomare (FRA) posted the day’s upset as he eliminated the current World No. 2 Filipe Toledo (BRA) in their Round of 32 matchup this morning. The Hossegor local found the tubes in a lineup he knows perfectly and built a healthy 12.83 total while Toledo struggled to identify the right opportunities. The Brazilian answered with a deep and technical barrel ride for a 7.10, the highest single score of the heat.

Left chasing an average number, Toledo went to the air but came up just short and Lacomare added another scalp to his list on home turf. When given the same opportunity in 2017, the Frenchman eliminated Jordy Smith (ZAF) and Julian Wilson (AUS) on his way to an incredible 5th place finish in Hossegor.

“I just focused on trying to catch the good waves and it was much tougher than I originally thought,” said Lacomare. “I really only got two in 45 minutes but fortunately I made them count. It’s really emotional to compete here at home in front of so many friends and family, and it’s nice to surf in good waves.”

Slightly diminished by a back injury sustained at the recent Freshwater Pro pres. by Outerknown, Toledo will have to settle for a second, equal 17th place result in France, and will need to make his last two events of the 2019 Championship Tour count for a shot at a first World Title.

“I did everything I could on that last wave but unfortunately that wave was really short,” said Toledo. “Congrats to Marc, he started the heat really well and that made all the difference in the end. I was really confident out there thinking one wave would come my way, so I waited but it was just not my day.” 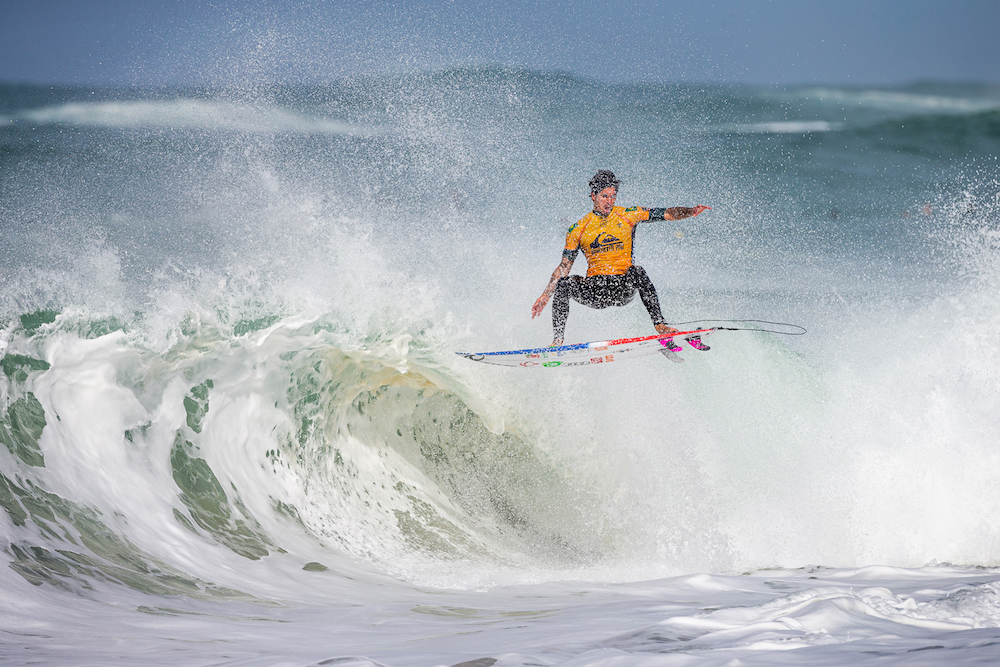 HOSSEGOR, FRANCE – OCTOBER 7: Two-time WSL Champion Gabriel Medina of Brazil wearing the yellow Jeep Leader jersey advances to Round 4 of the 2019 Quiksilver Pro France after winning Heat 9 of Round 3 at Le Graviere on October 7, 2019 in Hossegor, France. (Photo by Laurent Masurel/WSL via Getty Images)

A few heats later, reigning 2X WSL Champion and current Jeep Frontrunner Gabriel Medina (BRA) scrapped through a low scoring affair against young wildcard Marco Mignot (FRA) to keep his France impeccable track record unscathed. Mignot had the better start and had Medina against the ropes for the vast majority of their 46 minutes battle, but the Brasilian managed to come back in the dying moments of the heat and eliminated Mignot in equal 17th.

“I tried to get my waves but it was a challenge,” said Medina. “I’m stoked to make it through and just hope conditions get easier from now. I feel like I haven’t really surfed yet although I’ve taken so many waves in these first two heats.”

Portugal’s Frederico Morais found the first gem of the morning, locking into a bomb in the first heat to post a 9.17 out of 10. Unfortunately that wave came late in the heat for Morais, whereas World No. 3 Jordy Smith (ZAF) had built a strong combination with two barrels early on. Morais got a final opportunity on his backhand but failed to exit the barrel and the South African Smith moved on to the Round of 16.

“I think every heat is important regardless, whether it’s guys trying to re-qualify or for myself eyeing down the title race,” said Smith. “I need to get a win, it’s really simple for me. You just have to focus on getting those good waves, France is one of those locations that can go any way, with the tides and those beach breaks. Frederico got one of the best waves of the event and nearly made another one, if he did I could have been comboed, so I was just lucky to kind of chip away.”

After five events on the sideline due to a shoulder injury, Leonardo Fioravanti (ITA) kept his return to competition just as triumphant as on opening day, taking a buzzer-beater win over the 11X World Champion Kelly Slater (USA). The Italian, considered by many on the beach as a Hossegor local, found a deep cover on a long right and posted an excellent 8.33 to turn the heat and eliminate the Floridian. 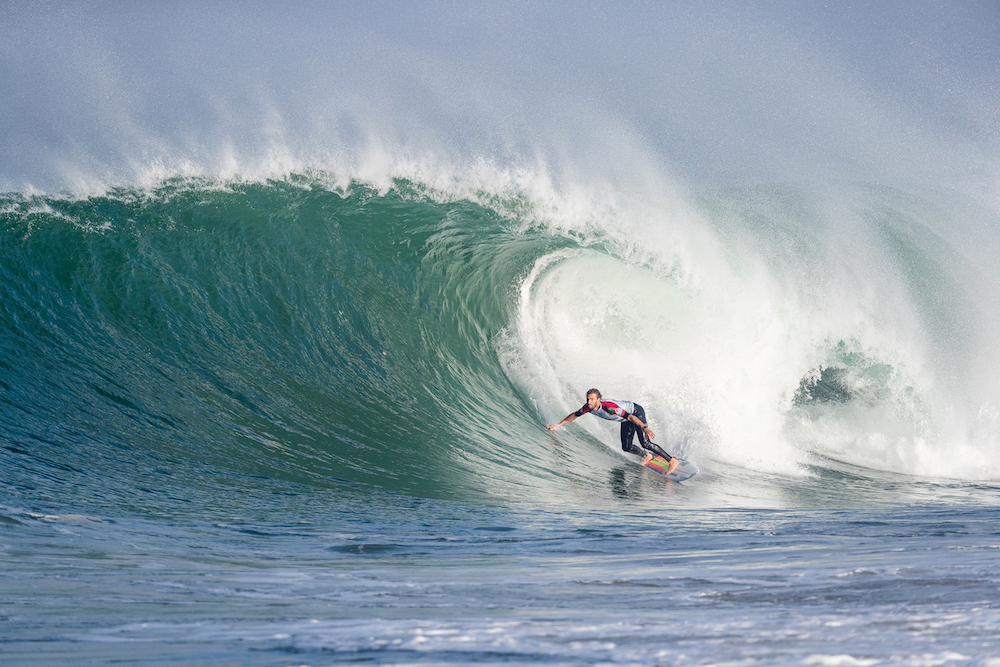 HOSSEGOR, FRANCE – OCTOBER 7: Frederico Morais of Portugal is eliminated from the 2019 Quiksilver Pro France with an equal 17th finish after placing second in Heat 1 of Round 3 at Le Graviere on October 7, 2019 in Hossegor, France. (Photo by Damien Poullenot/WSL via Getty Images)

Kolohe Andino (USA) and Italo Ferreira (BRA) advanced into the Round of 16, as opposed to Kanoa Igarashi (JPN) who fell short in his battle with Jack Freestone (AUS). In the ‘bubble-battle’ between Griffin Colapinto (USA) and Yago Dora (BRA), respectively 20th and 22nd on the rankings, it was Dora who came out on top despite Colapinto’s highest score of 8.23.

The French contingent lost half his representatives today with Mignot, Jorgann Couzinet (FRA) and Joan Duru (FRA) edged out in the Round of 32. Jeremy Flores (FRA), Michel Bourez (FRA) and Marc Lacomare (FRA) will keep the blue, white and red flag going into the Round of 16.