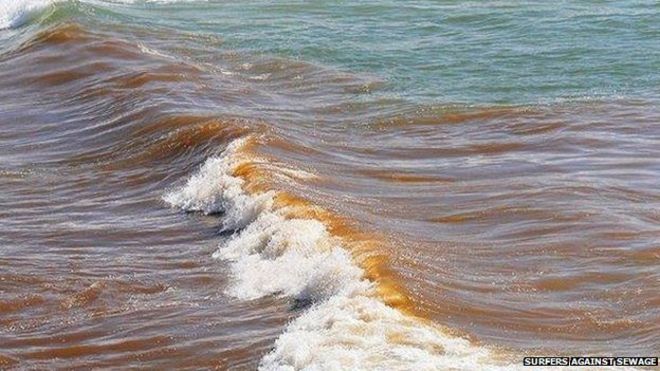 Water company efforts to protect the environment were described as ‘simply unacceptable’ in an Environment Agency (EA) report published today (10 July) with only 1 of the major water and sewage companies in England performing at the level expected.

Overall water company performance has deteriorated which reverses the trend of gradual improvement in the sector since the rating system began in 2011. Serious pollution incidents increased in 2018 causing damage to the rivers and wildlife.

Environment Agency Chair Emma Howard Boyd, who has previously warned water companies they would face a tougher regulatory approach with increasing inspections, is pledging that the Environment Agency will continue to work with Ofwat to look at financial penalties to drive better environmental performance given fines are currently only a fraction of turnover.

Writing in the report’s foreword she said “Companies should be reflecting on their environmental performance and long-term resilience, if this is poor they should be asking themselves whether dividends are justifiable.”

The annual report rates each of the 9 water and sewerage companies in England as either green, amber or red on a range of measures including serious pollution, pollution per km of sewer pipes, supply resilience, self-reporting of pollution and complying with permits – and also compares individual company performance to highlight the best and worst.

Northumbrian Water was the only company achieving the highest 4 star rating, showing that it is possible to bring in good environmental practices and limit the impact of operations on nature. The Environment Agency report said this improvement is to be applauded which had only been possible with focus from the top of the organisation and ongoing effort from operational teams. 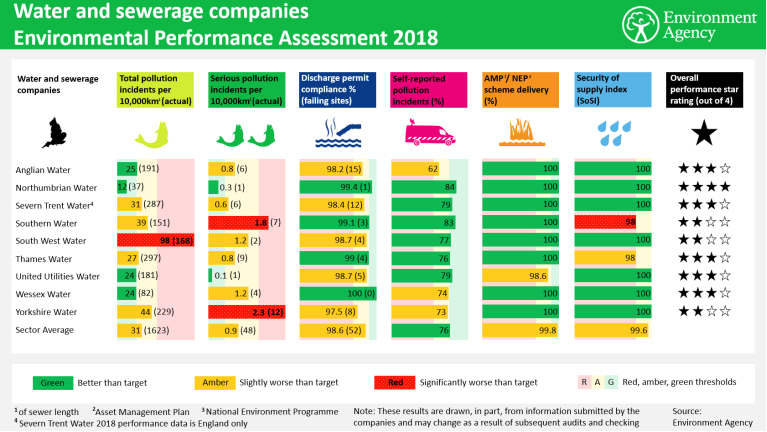 The report highlighted the best and worst performance including:

·         Northumbrian Water improved to gain the highest rating of 4 stars.

·         Severn Trent Water, United Utilities and Wessex Water dropped from 4 stars to 3 stars, with Anglian Water and Thames Water remaining on 3 stars. Companies with 3 stars must improve their performance to reduce their impact on the environment.

·         Southern Water, South West Water and Yorkshire Water were only given 2 stars and described as demonstrating an ‘unacceptable level of performance.’

·         Again this year South West Water is poor performing and has consistently demonstrated unacceptable performance and a red rating for pollution incidents. Most water companies look set to fail to meet 2020 pollution targets.

“Water companies need to clean up their act. People expect water companies to improve the environment, not pollute rivers and ensure secure supplies of water.

“With only one exception, none of the companies are performing at the level we wish to see, the country expects and the environment needs. We will continue to challenge CEOs to improve company performance and we will take strong and appropriate enforcement action.

“Companies performing well have a positive ripple effect on the natural environment and communities in their regions. We want all water companies to meet the expectation of their customers, the needs of environment and learn from the best practice that the leading company is demonstrating.”

In addition, the Ocean Conservation All-Party Parliamentary Group for which SAS are the secretariat, is pushing for new legislation led by Scott Mann MP to enable regulators to fine and hold water companies accountable for combined sewer overflows.