J-Bay day one. Top seeds do their thing. 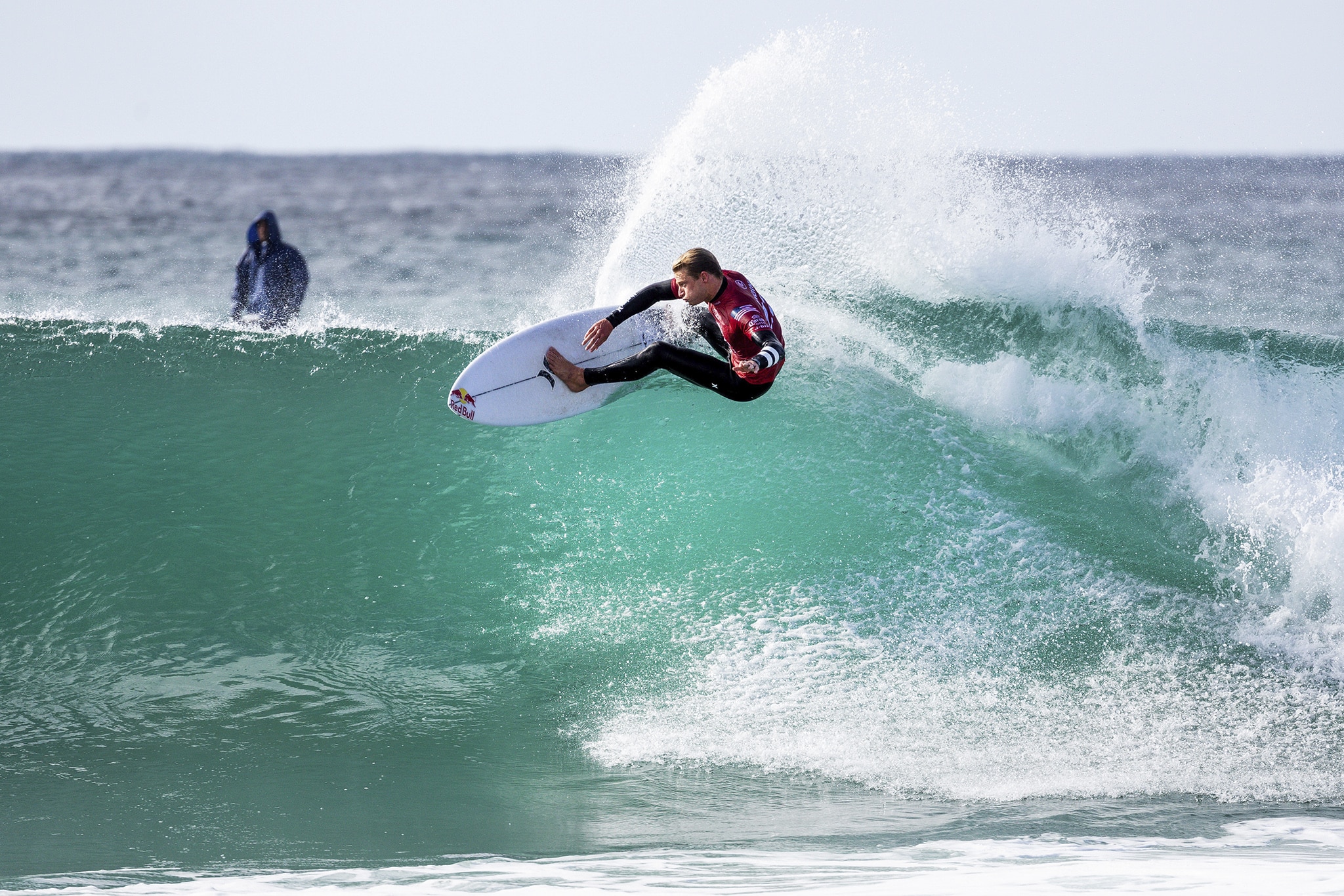 The Corona Open J-Bay, the sixth stop on the 2019 World Surf League (WSL) Championship Tour (CT), opened today in clean three-to-four foot (0.9 – 1.2 meter) waves in Jeffreys Bay, South Africa. The event completed the men’s Seeding Round, which determines the first elimination matchups, while the women finished the first three heats of the Seeding Round. The next call will be tomorrow, Wednesday, July 10, at 7:30 a.m. SAST for a possible 8:05 a.m. start. 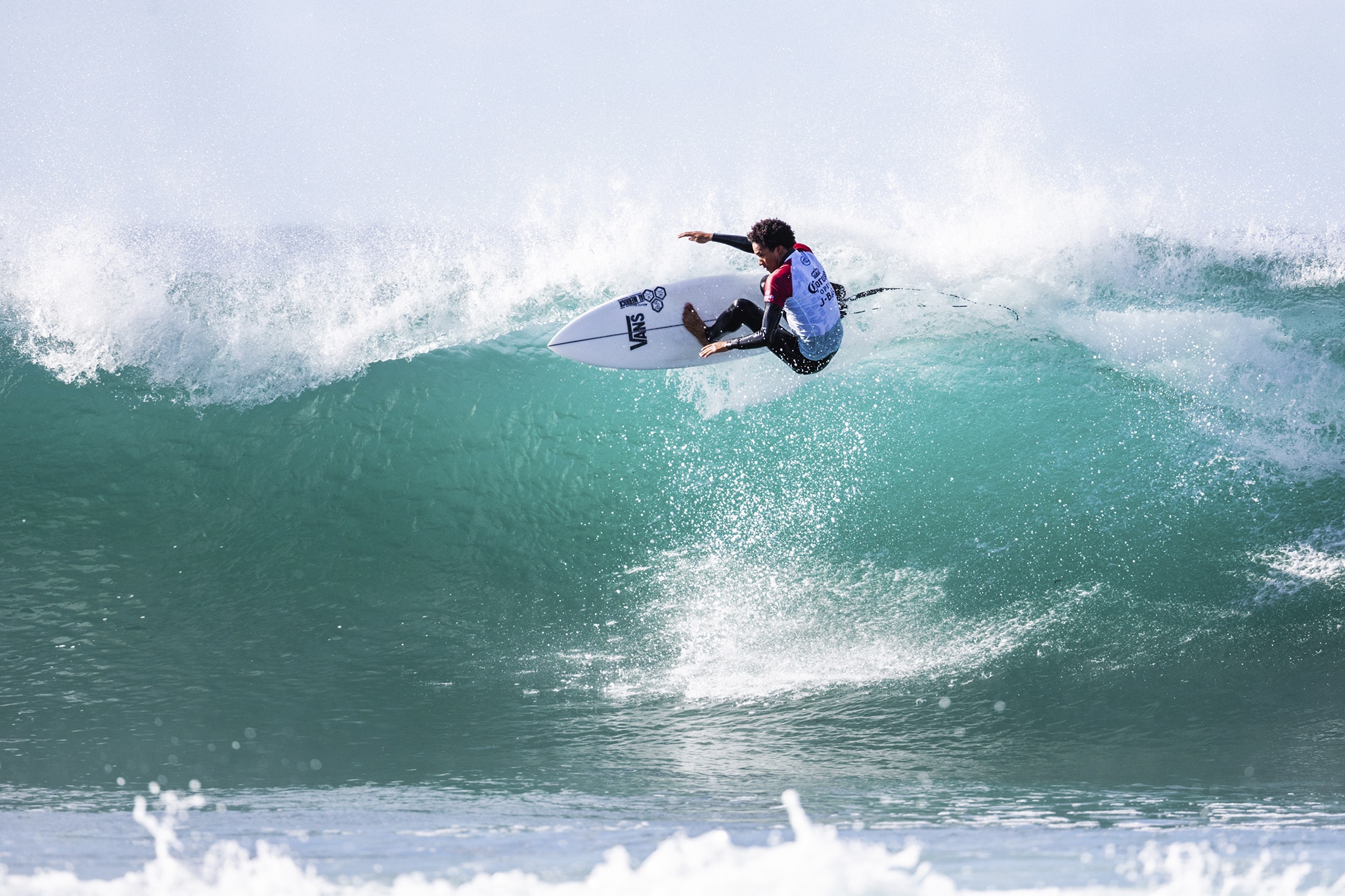 2019 World Title contender Jordy Smith (ZAF) and wildcards Michael February (ZAF), Bianca Buitendag (ZAF) and Beyrick De Vries (ZAF) will battle to advance as far as possible in their home country. With all the local support, the four competitors put on a show during today’s Seeding Round.

Smith, the two-time event winner, won his heat against replacement surfers Caio Ibelli (BRA) and Jorgann Couzinet (FRA) in Heat 4, while February got the advantage over Adrian Buchan (AUS) to place second behind defending event winner Filipe Toledo (BRA) in Heat 6. Toledo posted the highest heat total with a near-perfect 9.10 (out of a possible 10) and an excellent 8.50, but February styled through the lineup to claim his place in the Round of 32 alongside the Brasilian.

“I’m just having a great time here, I was going to come here anyway whether the contest was on or not and I got my whole family here and everyone’s just come together,” said February. “Yesterday the Rising Tides program was awesome,” continued February. “Spending time with all those girls out at the beach and taking them surfing and helping them paddle out was pretty cool. I spoke with them after my heat now and they were pretty stoked. I was happy I got to do that.”

“You just got to take it wave-by-wave,” said Smith. “I think my style suits this wave. I grew up surfing lots and lots of right-hand point breaks. I think that moulds a lot of the South African surfers’ styles and I think it suits Jeffreys Bay pretty good.” 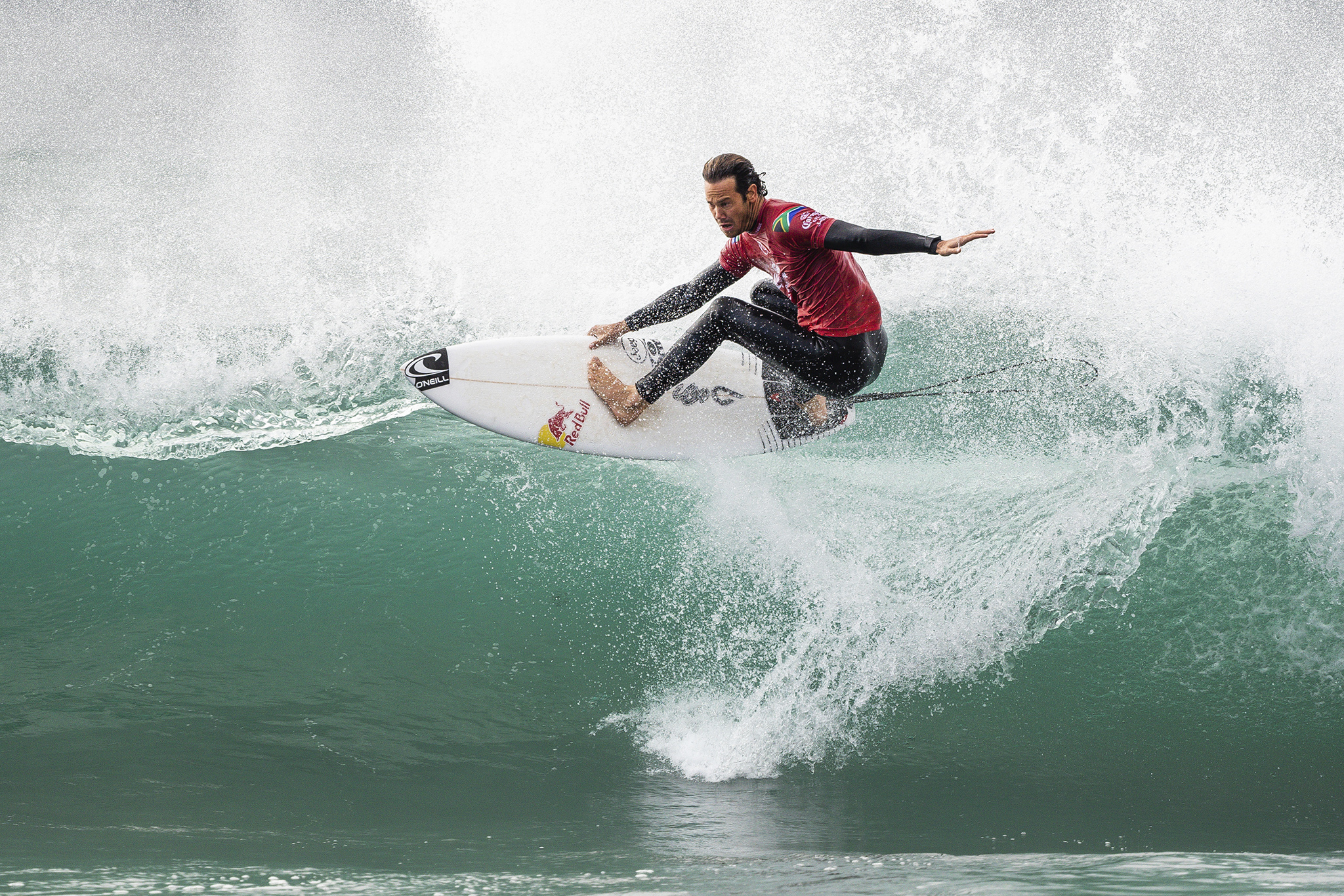 Wildcards De Vries and Buitendag were unable to find the waves skip the Elimination Round. De Vries came up against opponents Kolohe Andino (USA) and Yago Dora (BRA). Although only mid-range scores sufficed for No. 2 Andino and CT sophomore Dora, De Vries failed to secure the 4.84 to advance and will surf again against Ryan Callinan (AUS) and Jack Freestone (AUS) in Elimination Round 2, Heat 1.

“I was really nervous sitting out there knowing this heat could actually go flat for the remaining 20 minutes,” said Andino. “I was really happy that wave came and I’m stoked I went too because it looked like another one was going to come and then there wasn’t, I got lucky. I’m stoked, the position I’m at this year is really rad, I’m excited to be at J-Bay and just surfing long lines, taking it heat-by-heat and just really excited for my Round 3 heat. I’ve done a lot of work on these types of waves and unfortunately at Bells, I didn’t get to showcase it so hopefully, here I can.”

Buitendag fell to World No. 1 Sally Fitzgibbons (AUS) and Nikki Van Dijk (AUS) in the final heat of the day (Seeding Round 1, Heat 3). Buitendag missed the 4.80-requirement to Fitzgibbons’ 12.60 and 10.30 and will surf again in Elimination Round 2. Fitzgibbons marches on with the goal to surpass her 13th-place result from J-Bay last year. 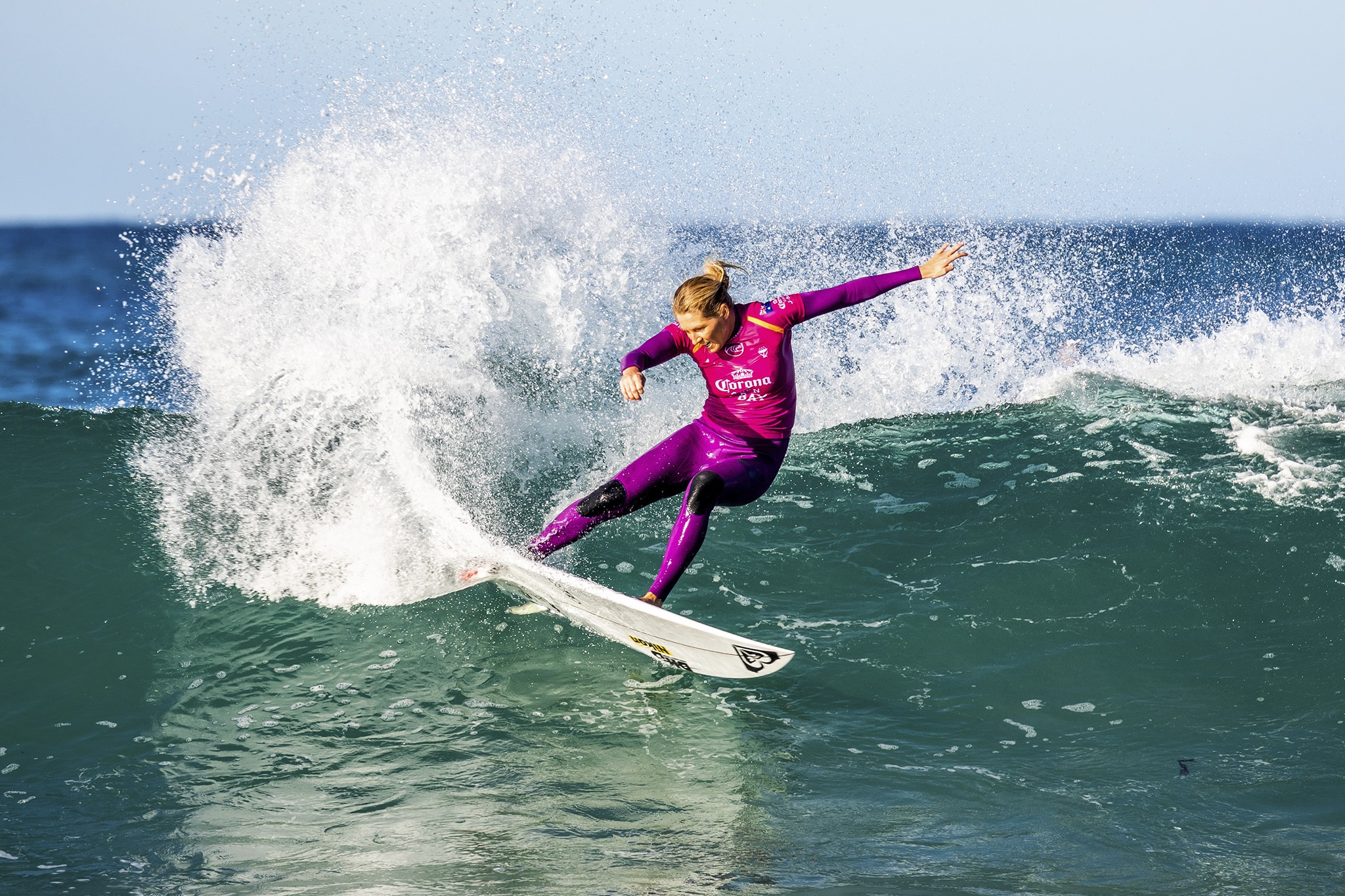 Stephanie Gilmore (AUS), seven-time WSL Champion, said yesterday that she wants to capture a second CT win this season before her opponents. After her opening heat at the Corona Open J-Bay, she is off to a flying start with two 7.40s to take down Johanne Defay (FRA) and rookie Macy Callaghan (AUS) in Heat 1. Gilmore impressed the judges with the highest scores of the women’s heats so far but most people are still talking about her ride at the WSL Rising Tides yesterday, which could be the best wave of the event.

“Rising Tides was really special yesterday,” said Gilmore. “We are out here chasing trophies, but those are the moments that you remember when you are on Tour. Just hanging out and spending time with those young girls, maybe it will make their day and maybe it will inspire them to go on to bigger and better things. It just gets them excited about surfing. That is really the most important thing.” 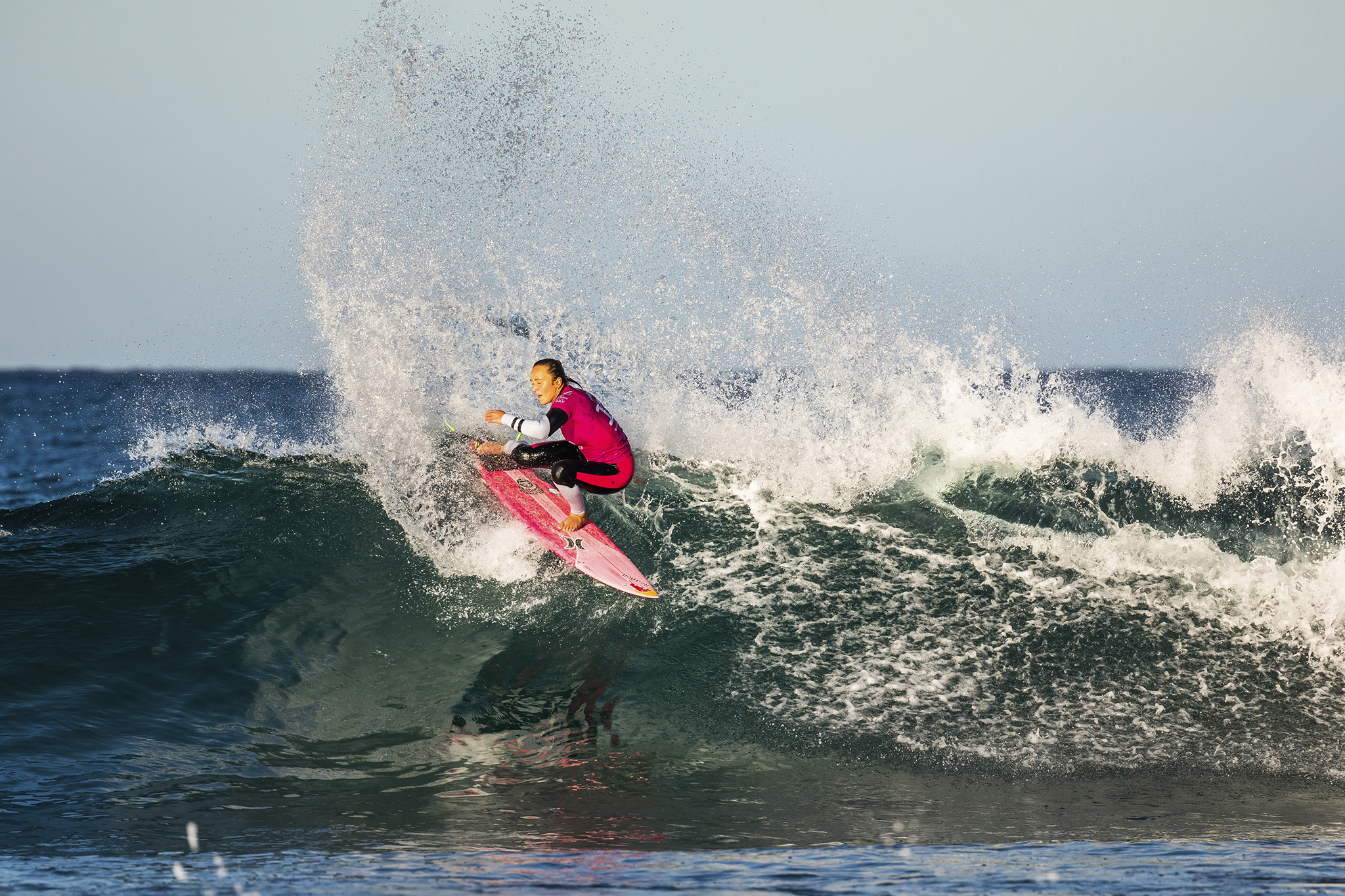 World No. 2 and three-time WSL Champion, Carissa Moore (HAW), currently sits one place ahead of Gilmore on the Jeep Leaderboard. She secured her spot in the Round of 16 after beating Bronte Macaulay (AUS) and Sage Erickson (USA). In a close move for second place, Macaulay finished a buzzer-beater ride to overcome Erickson and earn her spot in the Round of 16 with Moore.

Gabriel Medina (BRA) won the opening heat of the event against Joan Duru (FRA) and Frederico Morais (PRT). Morais, the replacement surfer for Mikey Wright (AUS), earned a runner-up finish at the Corona Open J-Bay in 2017 and will need to bounce out of the dreaded Elimination Round to reignite his campaign in South Africa.

Adriano de Souza (BRA) narrowly advanced to the Round of 32 after coming up against Kanoa Igarashi (JPN) and Jesse Mendes (BRA) in Heat 3. De Souza defeated Mendes by less than one point but could not overtake Igarashi who only held a 12.16 two-wave total (out of a possible 20). Mendes will be against Jeremy Flores (FRA) and Morais in Elimination Round 2, Heat 3.
The next call for the Corona Open J-Bay will be tomorrow, Wednesday, July 10, at 7:30 a.m. SAST for a possible 8:05 a.m. start.

The Corona Open J-Bay will be broadcast LIVE on WorldSurfLeague.com and Facebook.com/WSL. Also check local listings for coverage from the WSL’s broadcast partners. 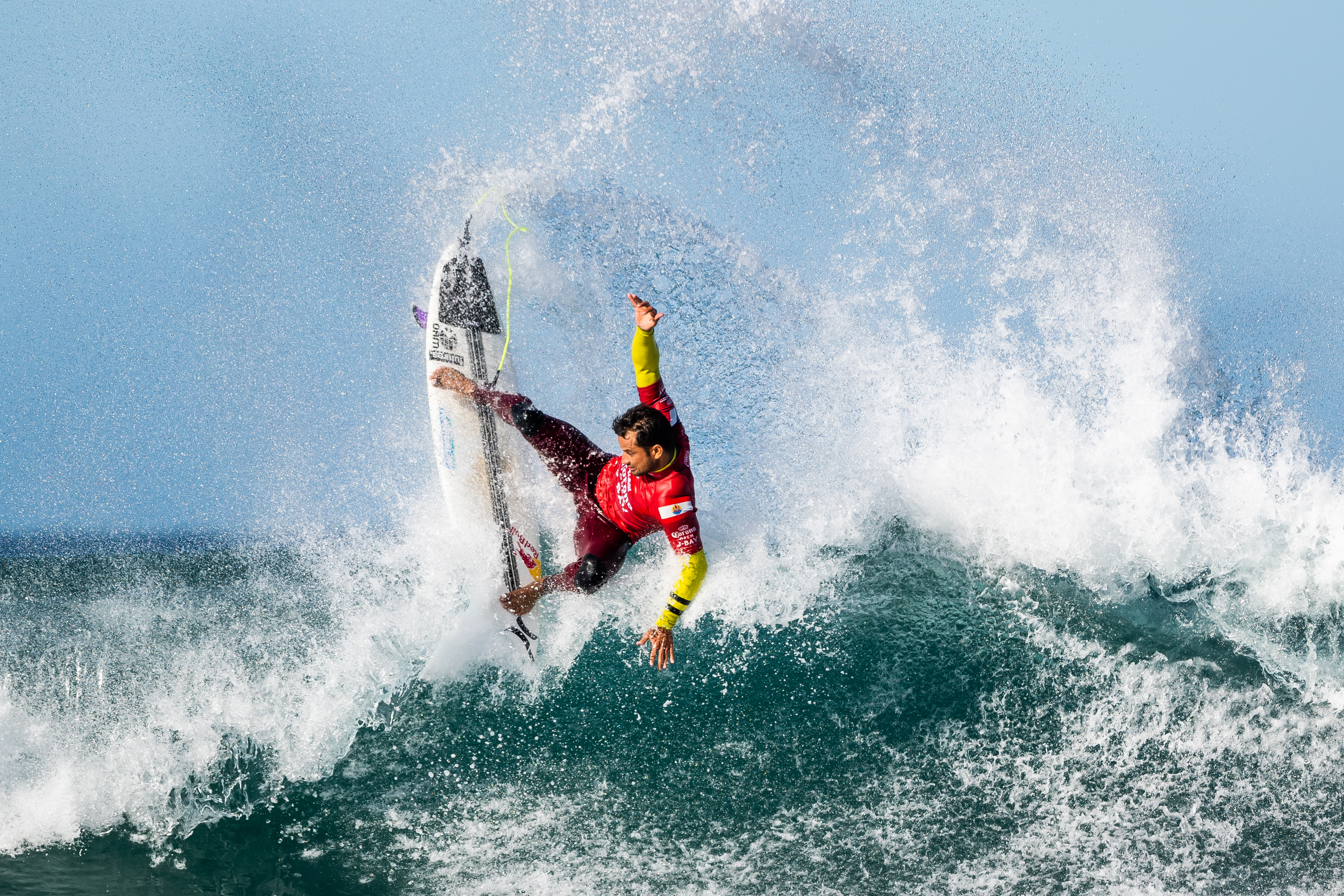 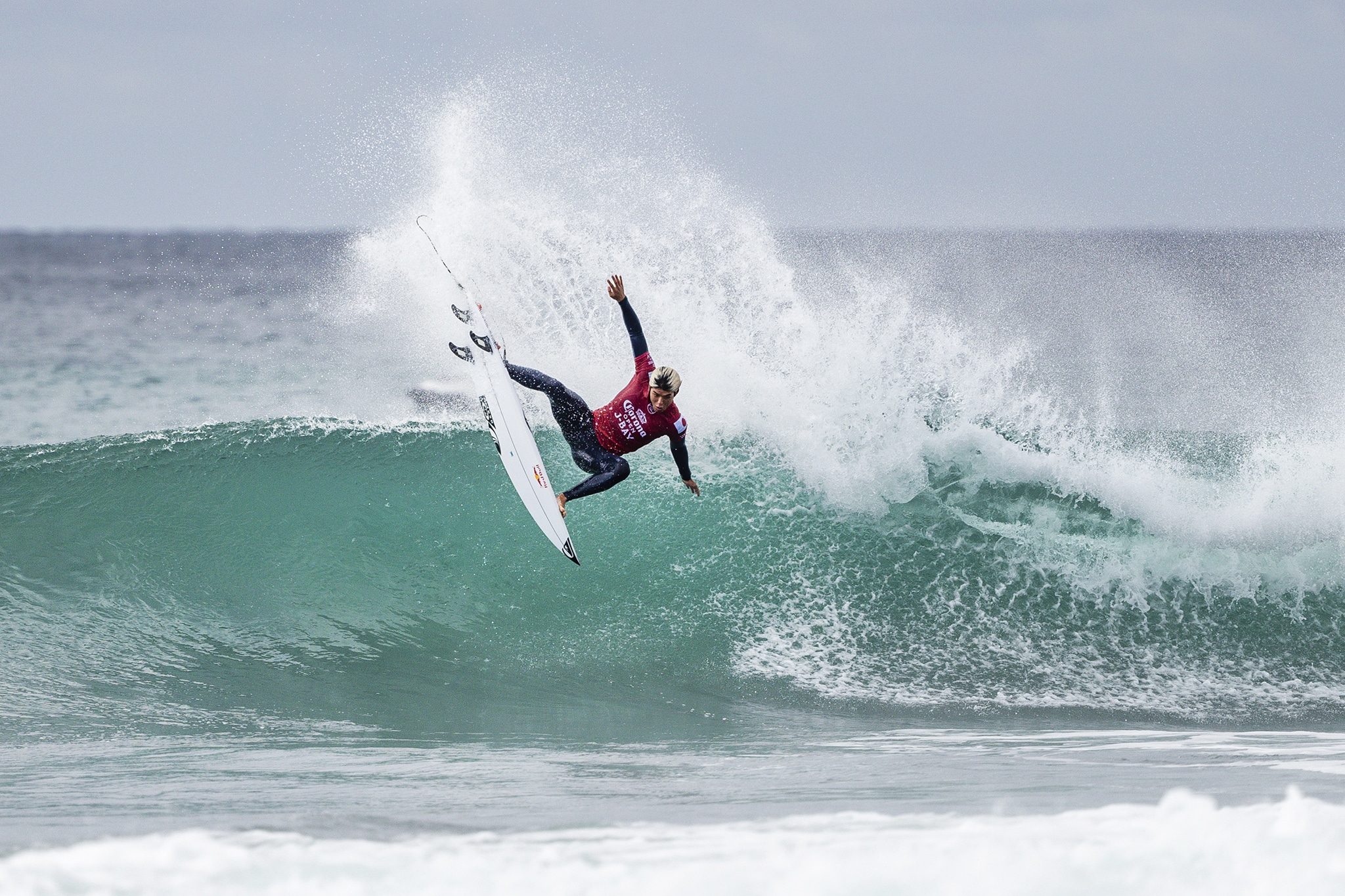