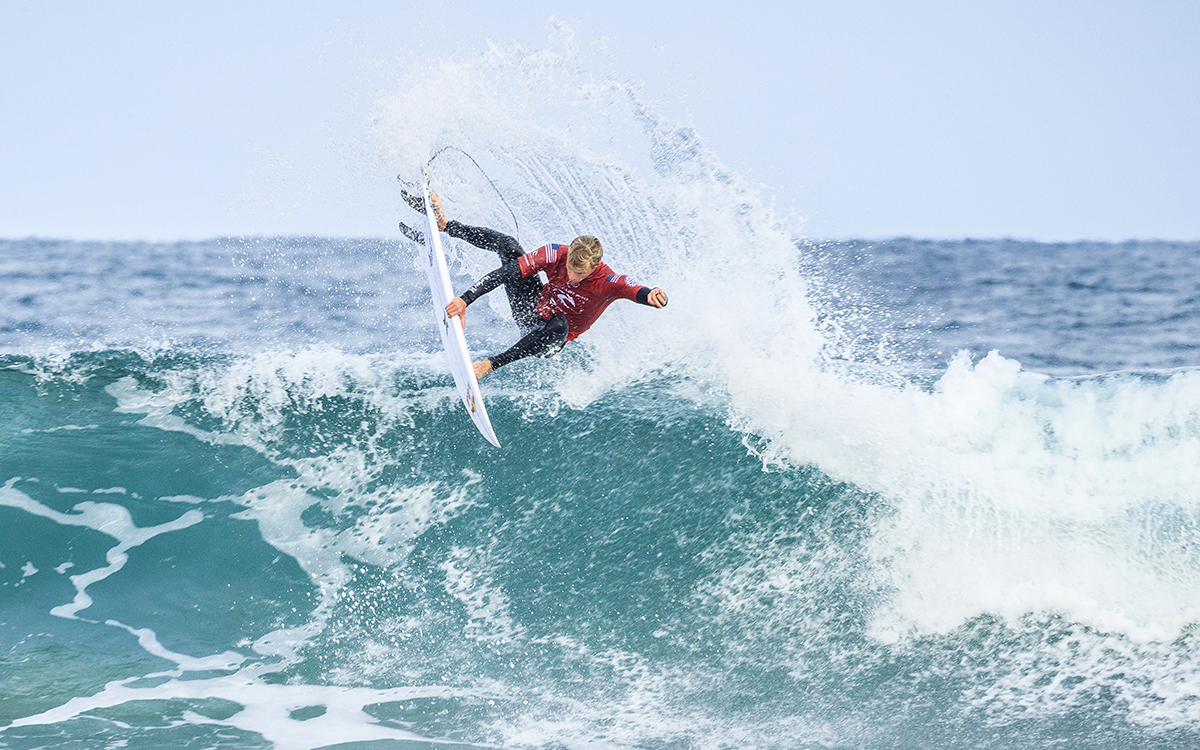 The Rip Curl Pro Bells Beach, Stop No. 2 on the 2019 World Surf League (WSL) Championship Tour (CT), started today with the first nine heats of men’s Round 1. The competition was held at the event’s backup site, Winkipop, in bumpy three-to-four foot (1 – 1.2 metre) waves. Winkipop is known for its long, fast walls and today tested the surfers with light onshore winds and shifting peaks. 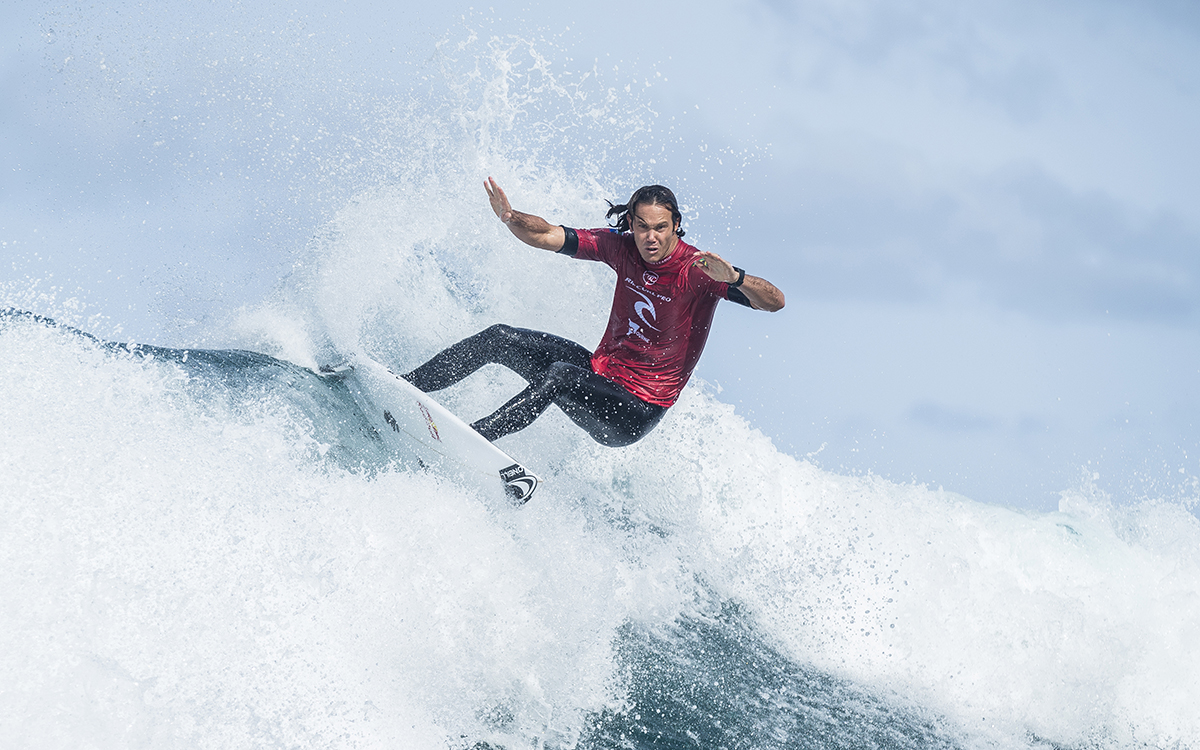 In 2017, Jordy Smith (ZAF) took a much-anticipated victory at the Rip Curl Pro Bells Beach with some saying the powerful natural-footer suits the Bells walls better than most on Tour. Currently sitting in Equal 3rd place on the rankings, Smith wants another solid result as he searches for his maiden World Title. He got his Bells campaign off to a reasonably good start, taking his opening heat with mid-range scores.

“That was difficult out there for sure,” Smith said. “It was pretty bumpy and hard to pick waves. I definitely feel lucky to have won the heat with such an average heat total. I’m just stoked to be back here at Bells because it’s definitely one of my favourite stops on Tour and the relaxed vibe in this area reminds me of J-Bay. The water and air is cool and it is all right-hand points, so I feel really comfortable here. I’m feeling more alive this year than I have in a while. I’ve got a lot of froth and want it more than ever and I’m just loving surfing.”

Current Jeep Rankings Leader Italo Ferreira (BRA) looked out of rhythm to begin his event title defence, while Ezekiel Lau (HAW) pounced on the opportunity for the win. Lau was extremely selective in the matchup, only catching two waves to post his heat winning total and progress into Round 3 (or the Round of 32). Former Rip Curl Pro Bells Beach runner-up Caio Ibelli (BRA) was unable to move out of third place and now faces the dreaded Elimination Round when competition recommences. 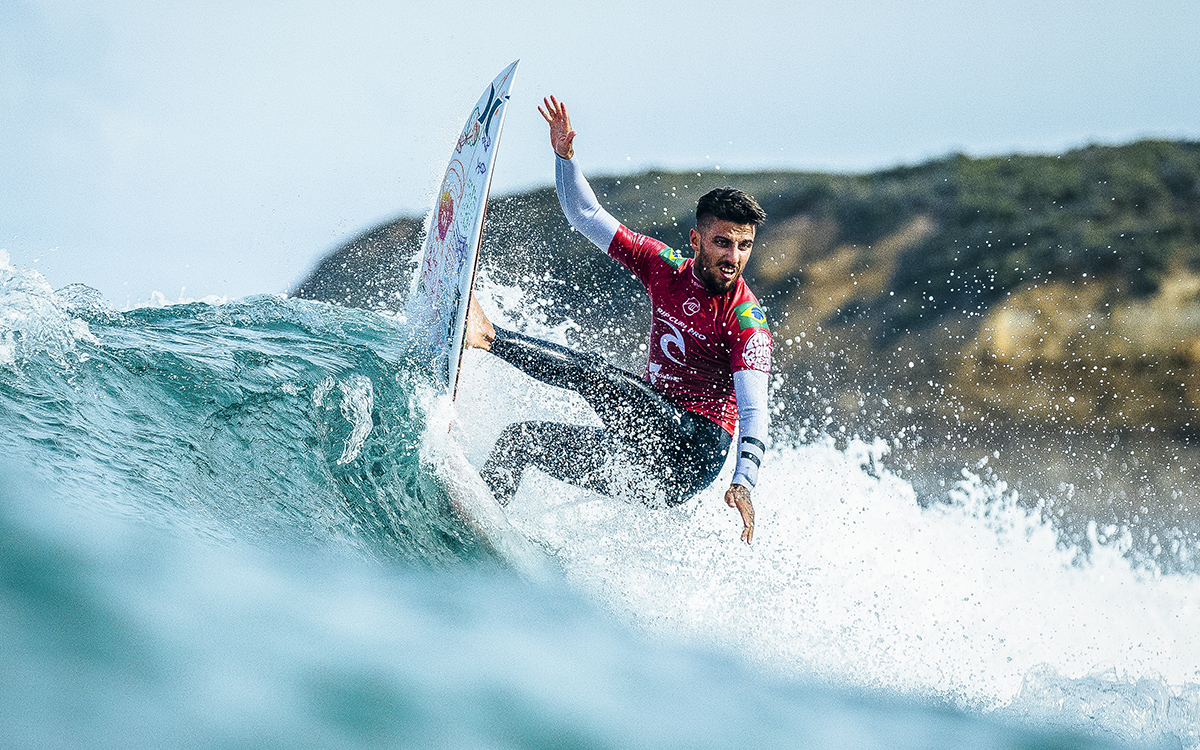 The freshly turned 24-year-old Filipe Toledo (BRA) debuted strongly against four-time Rip Curl Pro Bells Beach winner Kelly Slater (USA). Toledo nearly helped send the 11-time WSL Champion to Elimination Round 2 along with Trials runner-up Xavier Huxtable (AUS). The Brasilian made easy work of the fickle conditions and soared to an excellent 8.27 (out of a possible 10) for a 15.27 (out of a possible 20) heat total.

“The wind is a little bit onshore, but it is still so fun out there,” Toledo said. “If you picked the right waves, like the second one in the set, it would have a clean face and allow you to do good rail turns and also airs, which suits me. I rode a board today that has drawings on it that my daughter did which was really nice, it’s like she was out there with me.” 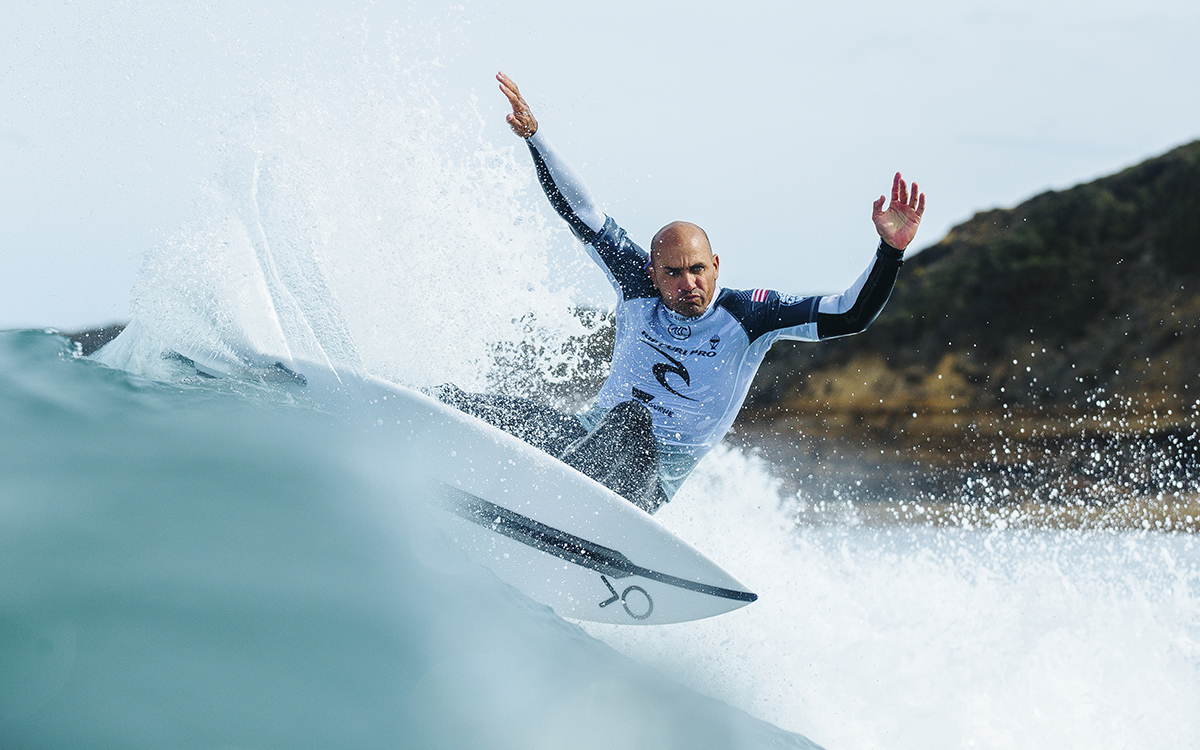 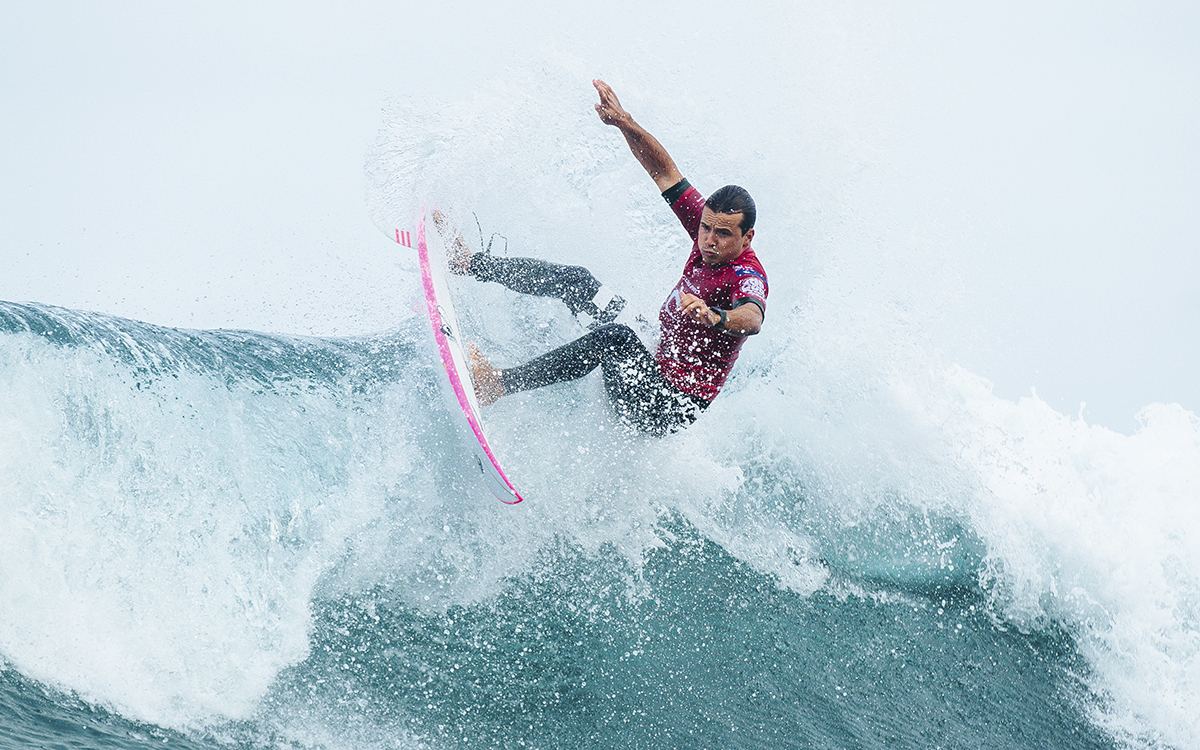 “The waves have been a little bit small for the last few days, so I feel like surfing through the Trials definitely gave me an advantage,” Willcox said. “Julian (Wilson) is one of my favourite surfers and I’ve always looked up to him so it was really cool to share a heat win him. I’ve had a few wildcards into CT events over the years but this one feels a bit different because I feel a lot more relaxed and sort of know what to expect.” 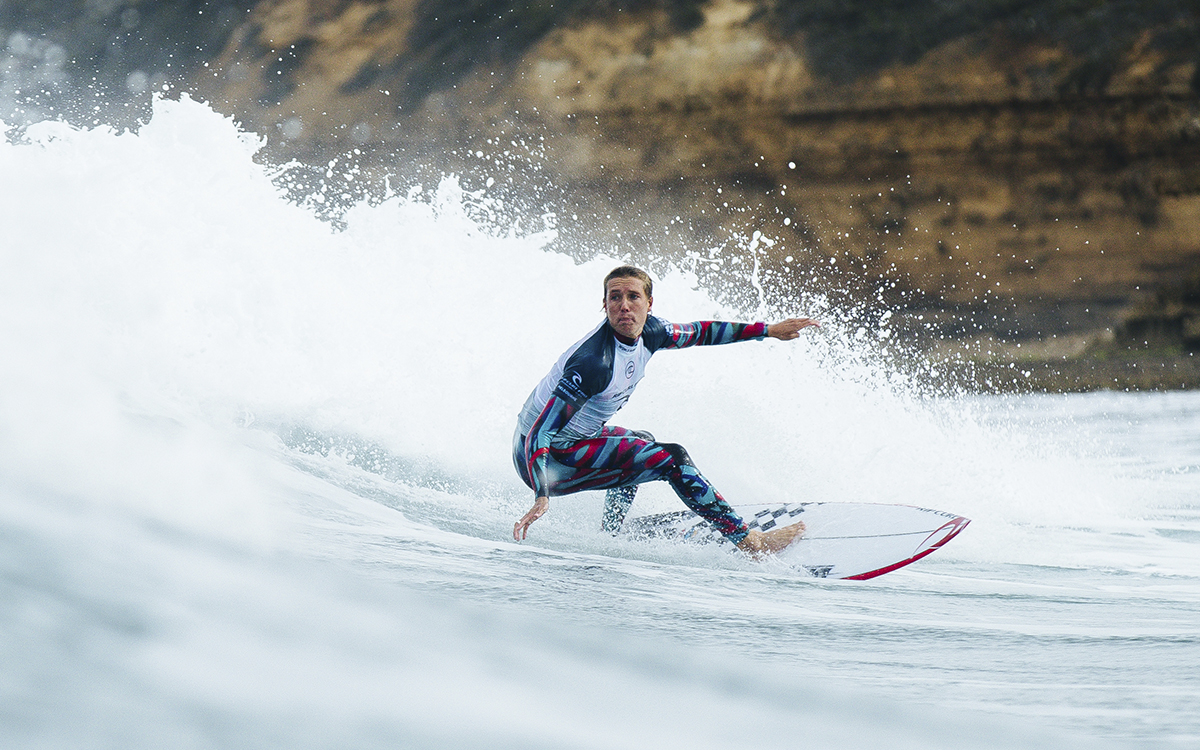 Reigning WSL Champion Gabriel Medina (BRA) showed why he’s the most formidable competitor on Tour, clinching a victory over Ryan Callinan (AUS) and Trials Winner Harrison Mann (AUS) in the dying minutes of the heat. Callinan held a commanding lead for the majority of the heat until the two-time World Champion found his rhythm and took the lead. The Brasílian superstar has yet to ring the coveted Bell and is one step closer in Round 3 (the Round of 32). 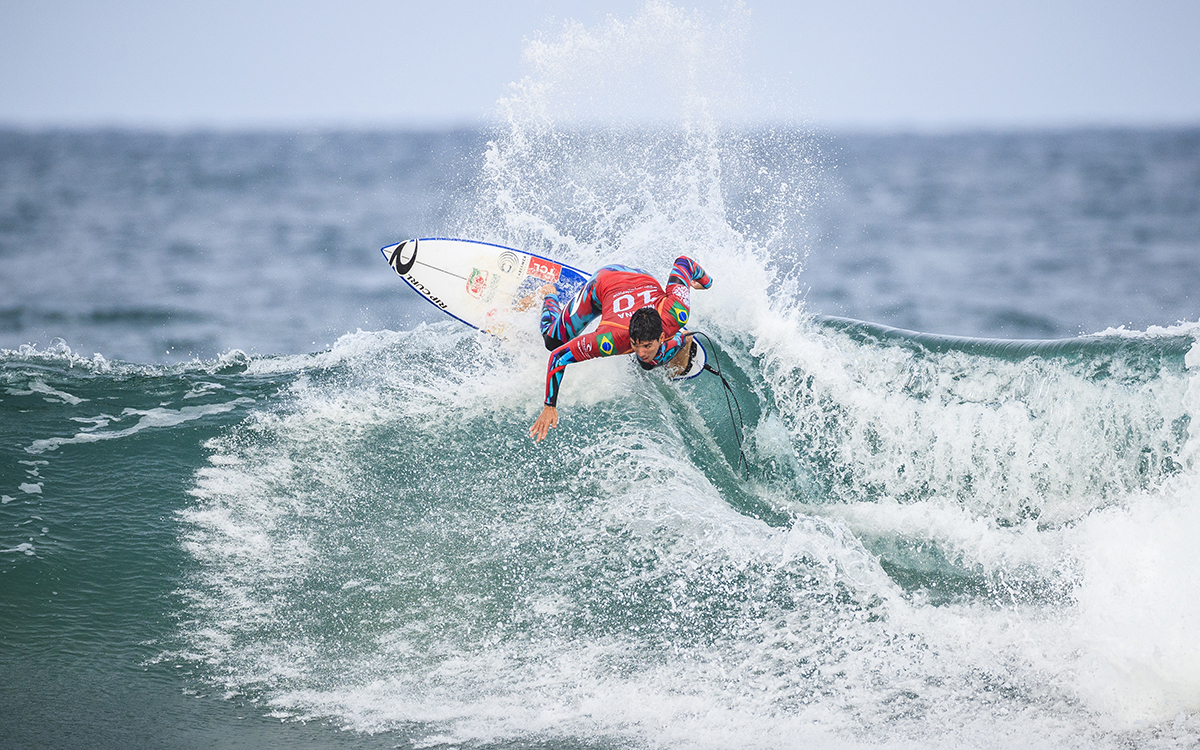 “It’s always hard coming up against Ryan (Callinan), he is such a great competitor,” Medina said. “Also, having a local wildcard is scary because they know the waves better than anyone on Tour, so it feels good to make it through. The waves were a bit slow in that heat so I had to be patient, which can be hard for me because I like to catch lots of waves so I’m definitely glad to have made it through.”

Americans Conner Coffin (USA) and Kolohe Andino (USA) continued their excellent form in 2019, each winning their Round 1 heats at Winkipop. Andino looked to have rebounded well from his narrow loss in the Final on the Gold Coast while Coffin hopes to better his Quarterfinal finish from last week.

The opening heat of this year’s event witnessed a clash of veteran talent where Jadson Andre (BRA) was able to notch a much-needed win over 10-year CT competitor Owen Wright (AUS) and 13-year veteran Jeremy Flores (FRA).
The next call for the Rip Curl Pro Bells Beach will be tomorrow at 6:45 a.m. AEST, when event organizers will reassess the conditions to decide the event’s schedule.

The Rip Curl Pro Bells Beach will be broadcast LIVE on WorldSurfLeague.com and Facebook.com/WSL. Also, check local listings for coverage from the WSL’s broadcast partners.