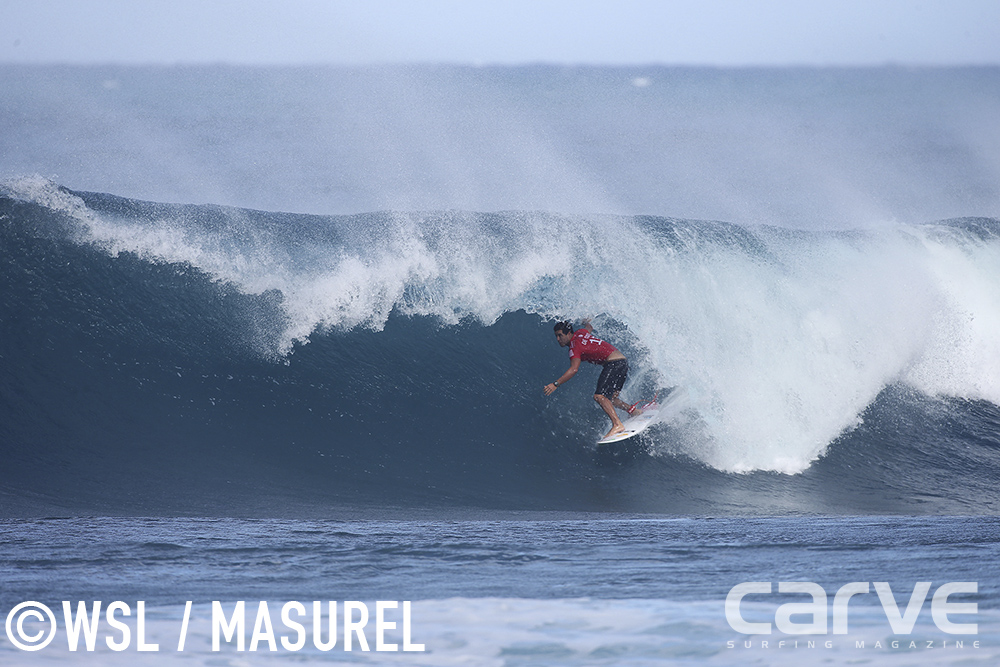 He’s just beaten Mason Ho in the semi of the Billabong Pipe Masters… If Adriano lost to Mason he would have lost the title to Mick by a mere 450 points, but he maintained the pressure and used his years of experience to hold his nerve in a low scoring heat. He’s become the second Brazilian to win the title after years of being a danger man. He faces the other Brazilian world title holder, Gabriel Medina, in the final shortly. He dedicated his win to his brother who purchased his first surfboard for him for seven dollars and his friend the late Ricardo dos Santos.

In a phenomenally tense day of competition ADS main title rival Mick Fanning went down to Medina in the first semi-final, ironic as by making the semi Mick snuffed out Gabriel’s title chance. By winning the semi Gabe also became the first Brazilian to win the Triple Crown. Mick led for the duration in wonky small Pipe but Gabe pulled an air out of the bag in the final minutes to flip the lead his way.

Huge congratulations ADS, you deserve it and you can watch the Gabe v Adriano final here.

Adriano added the Billabong Pipe Masters title to his day of days!

‘It’s an extra bonus, to be a Pipeline champ like Jamie and Kelly. There’s no words to describe how I feel right now. To be a world champion and to surf against my friend in the final. The ocean didn’t co-operate today but it’s still Pipe. I’m happy to finish the day well. Just like to say thanks to the fans here in Hawaii.’

‘Gabriel showed me the way to get here. How to be a world champion. Thank you so much. To share this with him in the final is a blessing.’ 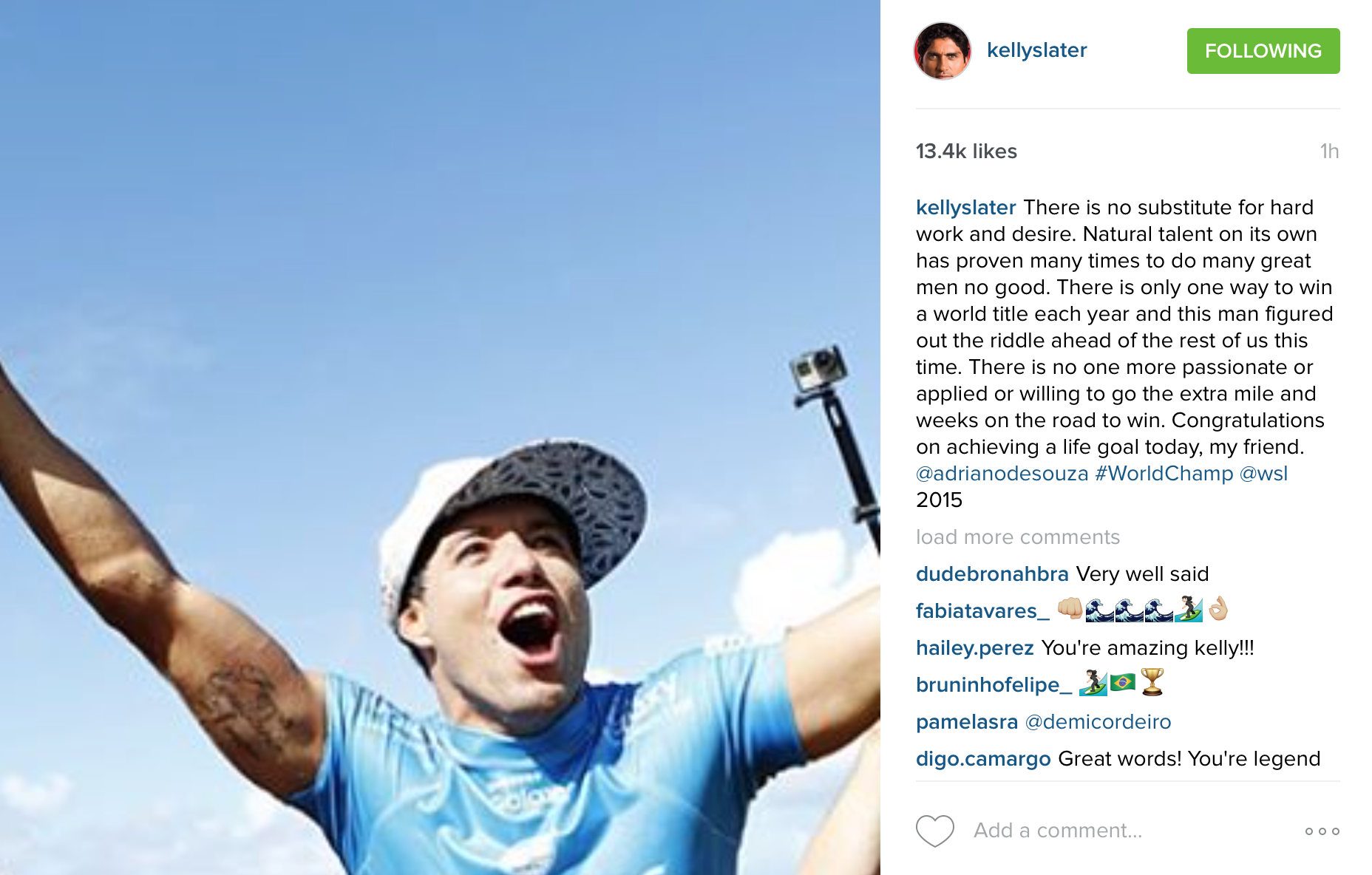 After what can only be called the most dramatic day in pro surfing history, Brazilian Adriano de Souza (BRA) has clinched the 2015 World Surf League (WSL) Title at the world-renowned Banzai Pipeline in Oahu, Hawaii. In the process, he also became the first Brazilian to win the Billabong Pipe Masters in Memory of Andy Irons.

Surfing for ten years amongst the world’s elite and setting the stage for the rise of the ‘Brazilian Storm,’ De Souza’s Title clinching performance came with a significant wave of emotions, as he dedicated the victory to fallen compatriot Ricardo dos Santos who died earlier this year.

“It’s an incredible feeling and so special in dedication to my good friend Ricardo dos Santos,” de Souza said. “I have this tattoo in memory of him — he had the same tattoo that said ‘Strength, Balance and Love,’ and that’s all I needed to win this World Title. This is all in dedication to my brother as well, who bought me my first surfboard for seven dollars and now I’m on top of  the world. What a dream to be a Pipeline Champion Master like Jamie [O’Brien] and Kelly [Slater] and Bede Durbidge, just so many names going through my brain now. There’s no words to describe how I’m feeling right now.”

Taking down an explosive wildcard in Mason Ho (HAW) for a Semifinal win, de Souza claimed the coveted World Title after a loss earlier in the year at the Moche Rip Curl Pro had him doubting his chances heading into Pipeline.

“About midway through the year I thought Mick deserved the World Title more than me,” de Souza said. “He’s such a strong man and a three-time World Champ battling me for my first title was scary.  I just wanted to give my best wishes to Mick and his mom — I had such a mix of emotions, but the day of my life has arrived.”

Fanning came into Pipeline having won his first-ever Hawaiian event at the Vans World Cup of Surfing and looked to be the favorite to win the World Title. But  after being eliminated by Medina, his Title chances were left to Ho who couldn’t seal it for the three-time WSL Champion despite Fanning’s incredible win over Kelly Slater (USA).

“The energy’s been amazing walking down to the shore,” Fanning said. “I’m almost in tears every time I ‘ve paddled out and I’m just kind of going with the emotions. I had a friend tell me once that we can do anything and you just have to do it the best you can and stay true to yourself and things will happen.”

Claiming Runner-up status at the Billabong Pipe Masters for the second, consecutive year and the first Brazilian to earn a Vans Triple Crown of Surfing title, Gabriel Medina (BRA) achieved a phenomenal comeback after a tough start to 2015. Turning his season around at the Billabong Pro Tahiti with a Runner-Up finish, the defending WSL Champion stood proud hoisting his well-deserved trophy.

“I’m really stoked to be the first Brazilian to win a Triple Crown – it was actually my goal coming to Hawaii,” Medina said. “This year has been difficult for me when I lost the first four events and everyone said I wouldn’t have a shot at the World Title. I’m so thankful to come here and be a part of the World Title race. I’m so happy to make the Final, it was a tough heat against Mick and I got the score I needed in the last minute and I couldn’t ask for anything better. I’m so excited for Adriano to win his first World Title and Pipe Master – I know he’s been dreaming for ages and he did everything he could.”

It was Medina who ended C.J. Hobgood’s (USA) final run at a Pipe Master title, earning a Quarterfinal appearance in his last WSL Championship Tour competition. Winning a World Title in 2001, the 36-year-old Florida native spent 17 years on the dream tour – giving fans and fellow competitors so many fond memories to look back on.

“You’re only as good as the people you surround yourself with and I’ve spent the last 17 years of my life surrounding myself with, who I think, are not only the best surfers in the world, but the best humans,” Hobgood said. “I think this surfing platform is not just better than when I started, it’s 1,000 percent better so I’m happy to leave. The surfers are better, their characters and I just want to thank WSL for not only giving me this platform to speak right now but the stage out there to perform and do what I love. I’m fortunate enough that they work with us and continue to work closely with us, and hopefully it just keeps getting better and better because I’m going to be at home watching – so I’m going to be demanding the best. I just want to thank you guys, I’m stoked to get to work with Salty Crew now – thank you, love you…bye.”

“December 2015 has been the biggest month ever in the history of professional surfing,” said Paul Speaker, CEO of the World Surf League.  “The Billabong Pipe Masters achieved the largest audience and greatest live viewership in the history of the sport, and we are so grateful to the athletes, fans and our partners for delivering a season to remember. Our congratulations go out to Adriano de Souza on an incredible Pipeline performance and first World Title, as well as maiden Pipe Masters title, and Gabriel Medina for claiming Brazil’s first Vans Triple Crown of Surfing title. We’d also like to extend our deepest condolences to the Fanning family and their tragic loss, and best wishes to Bede Durbidge and Owen Wright, their families, on their serious injuries toward a full recovery.”

The world’s best surfers will return in 2016 with the kick-off event at Gold Coast in Queensland, Australia in March. 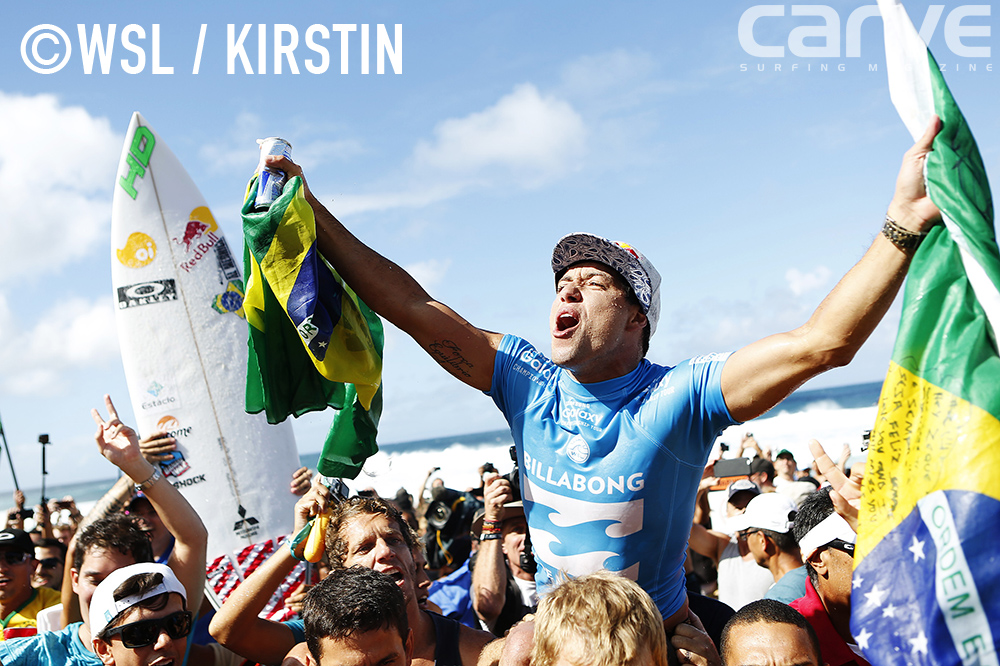 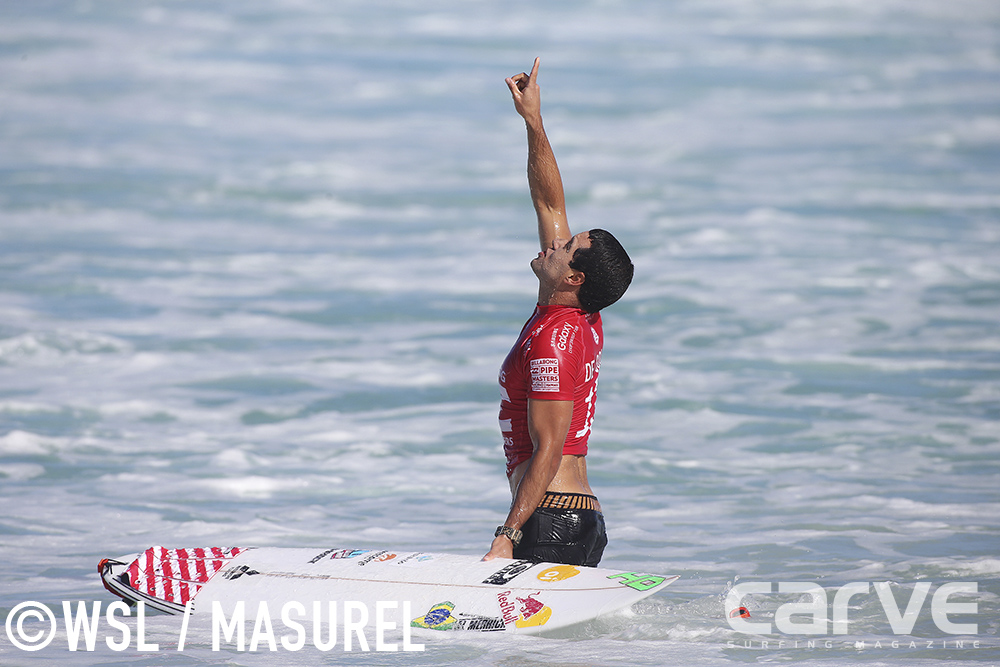 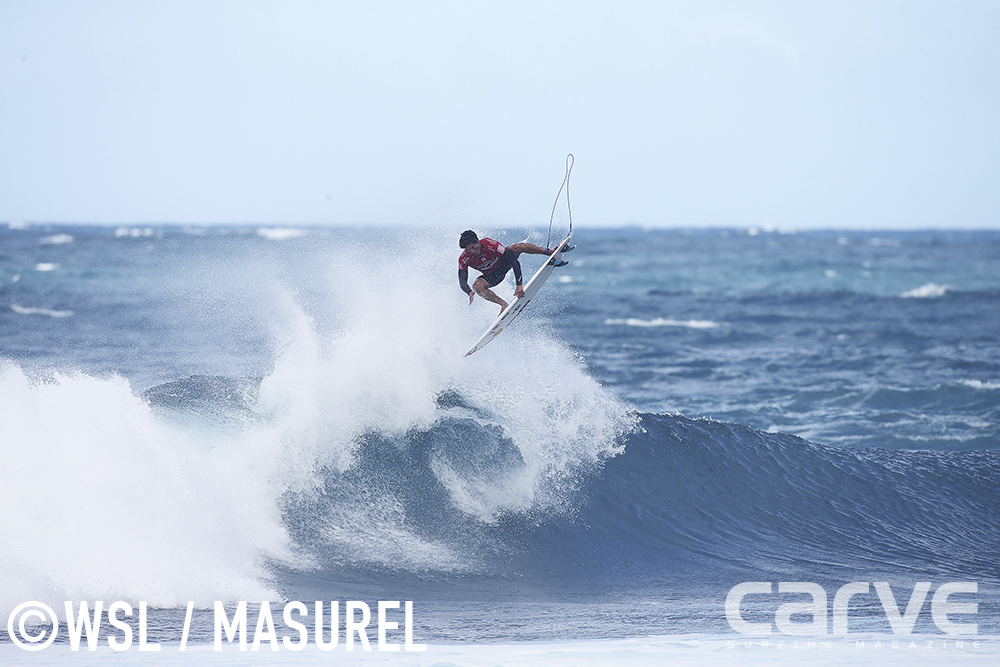 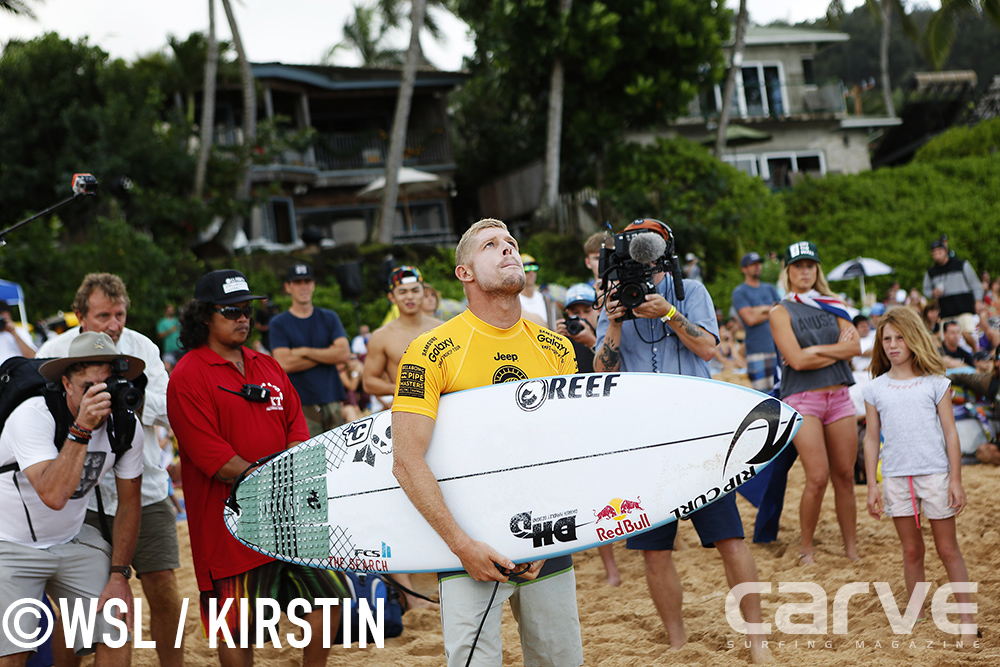 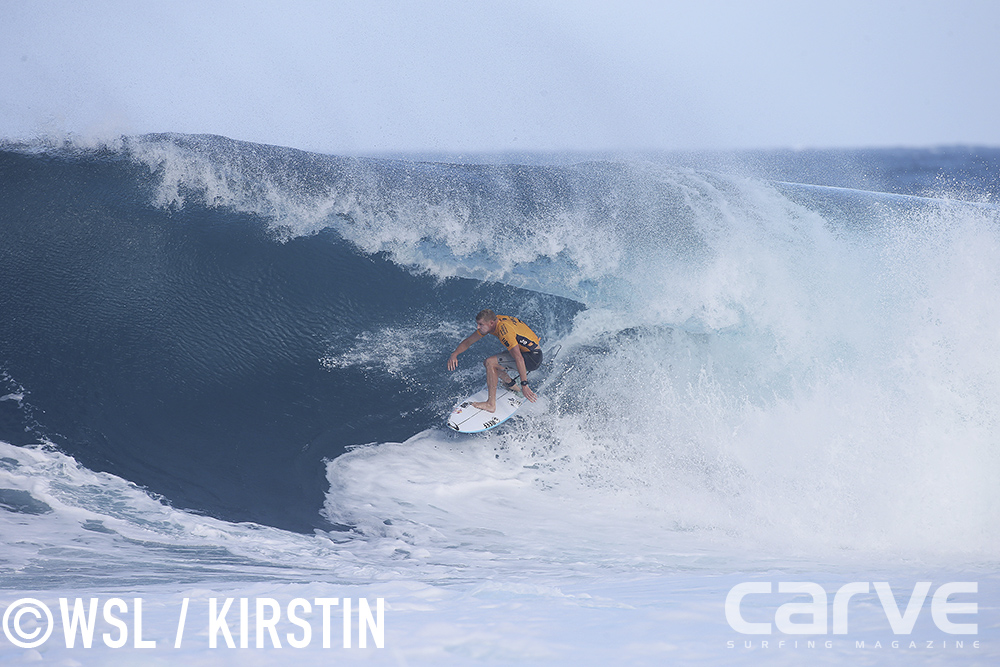 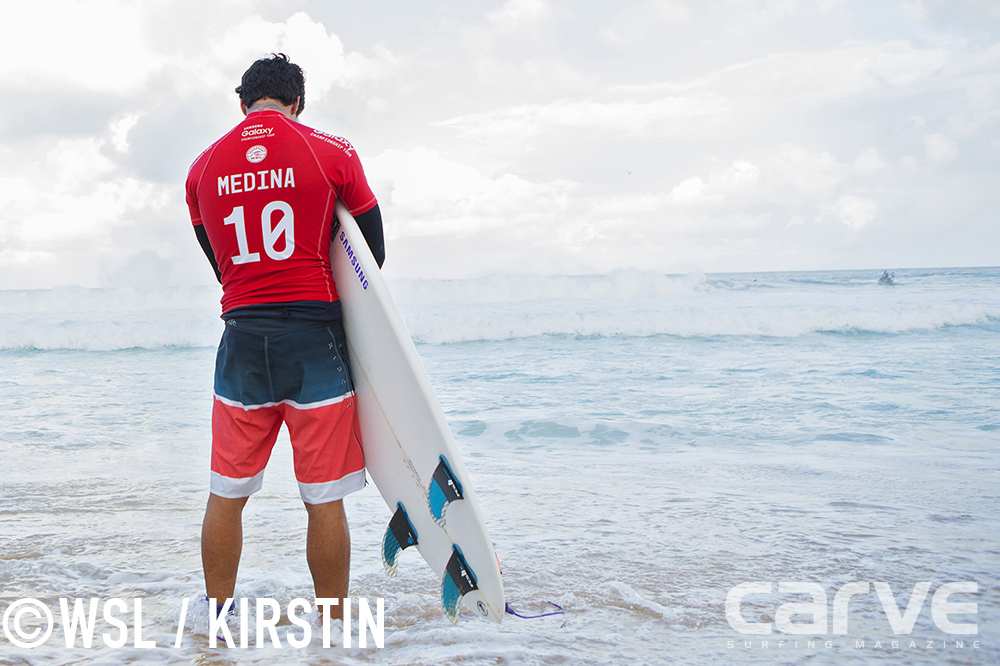