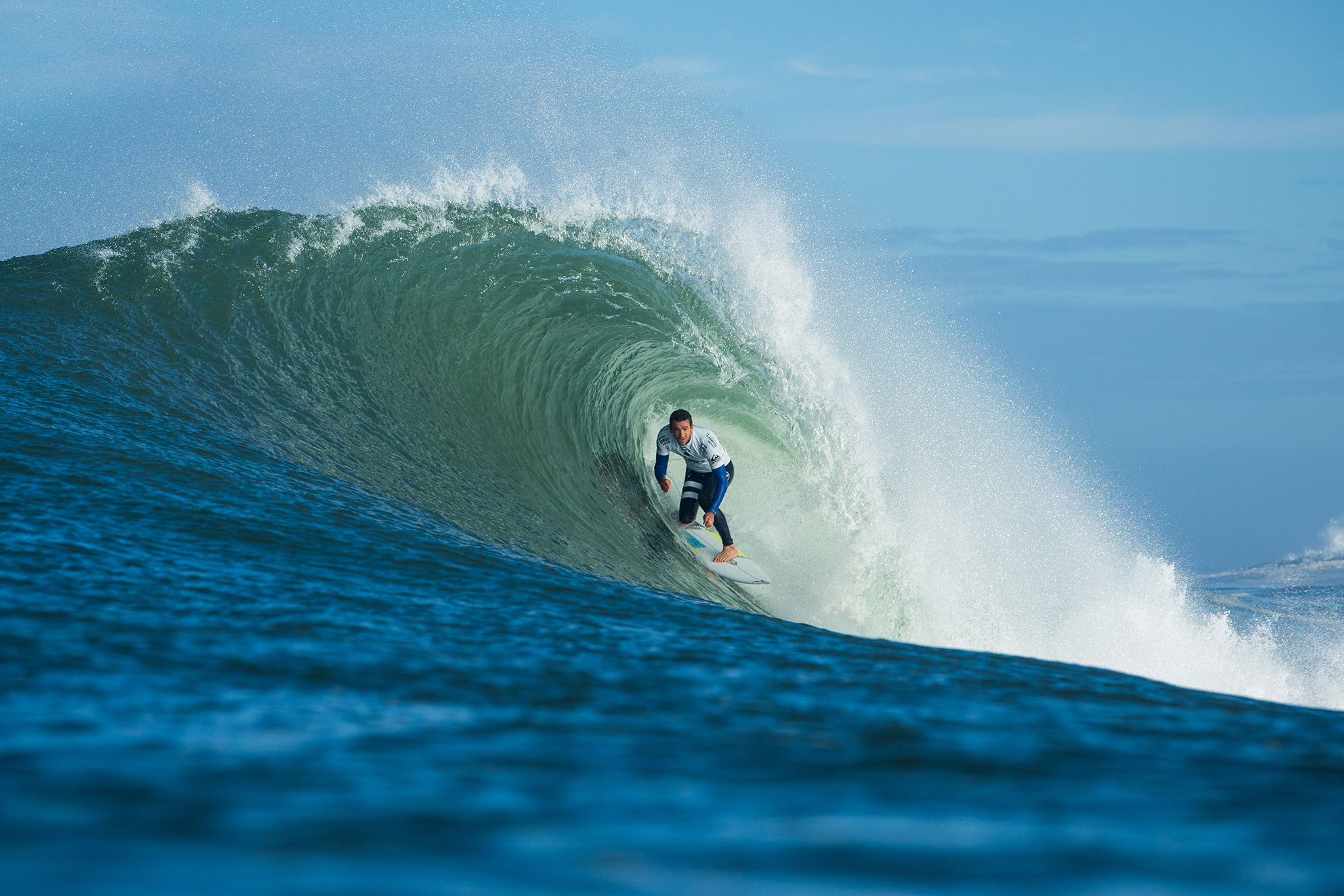 The legendary beachbreaks of Hossegor have finally come to life for the Quik Pro. Tubes a plenty in the autumnal Landes sunshine…  Here’s the results, highlights reel and stuff…

Round 1 of the Quiksilver Pro France, Stop No. 9 of 11 on the 2015 Samsung Galaxy WSL Championship Tour, was completed today in clean six-to-eight foot (2 – 2.5 metre waves) at Culs Nus.

Offshore winds groomed the solid swell on offer, creating a tube riding feast for the world’s best surfers, who proceeded to put on a high-performance surfing spectacle for the thousands on the beach and many more watching online and via broadcasts around the world.

John John Florence (HAW), 22, defending event champion, picked up where he left off last season with his unparalleled comfort in conditions of consequence, pulling into a sizable forehand barrel and topping it off with a massive layback snap to collect a near-perfect 9.93 out of 10.

“There’s a lot of water moving, but it’s really fun and clean,” Florence said. “I love coming back here. It’s been flat the whole time we’ve been here so I was a little worried but when I woke up this morning and saw this bank with the righthand barrels I thought this would be fun.” 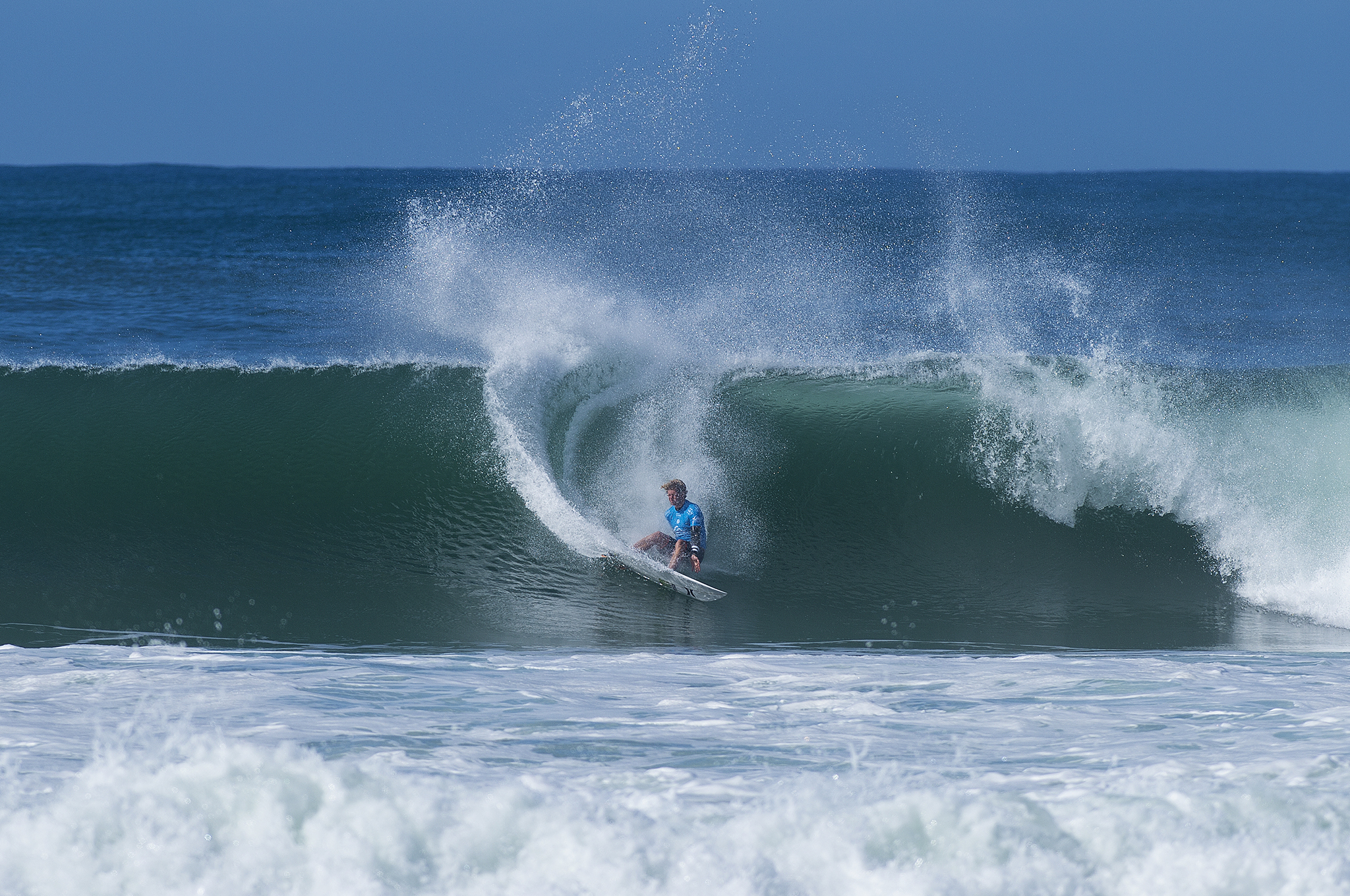 Mick Fanning (AUS), 34, three-time WSL Champion and four-time event champion, is in the Jeep frontrunner position again and overcame a treacherous Round 1 matchup against Tahitian powerhouse Michel Bourez (PYF) and local event wildcard Maxime Huscenot (FRA). Fanning threaded through a heavy Hossegor barrel to belt an incredible 9.73 and advance straight into the third round.

“It can be heaven or hell out there, if you get the waves it’s great and there are some amazing ones, but you can also easily get lost real quick,” Fanning said. “You’ve got to pick your spot and hopefully they come so there’s a little bit of luck involved today. All my wins here were really different, I think in 2010 it was somewhere around here, out the back and pretty massive, very similar conditions to this and it was never about scores and results but just about getting barreled with only one other person out, so probably the funnest year.”

Julian Wilson (AUS), 26, current WSL No. 5, put on a deep barrel-riding clinic at Cul Nus, to collect the day’s highest combined heat total, an impressive 18.80 out of 20. A former runner-up in France (2011), Wilson found two brilliant right-handers back-to-back and surfed the fast, throaty barrels flawlessly to advance into the third round.

“I got into a really good rhythm with the sets and got two waves back to back, it was really fun out there,” Wilson explained. “I want to have a really consistent year, two 13th obviously never feels good but there’s a lot left to go in the year.” 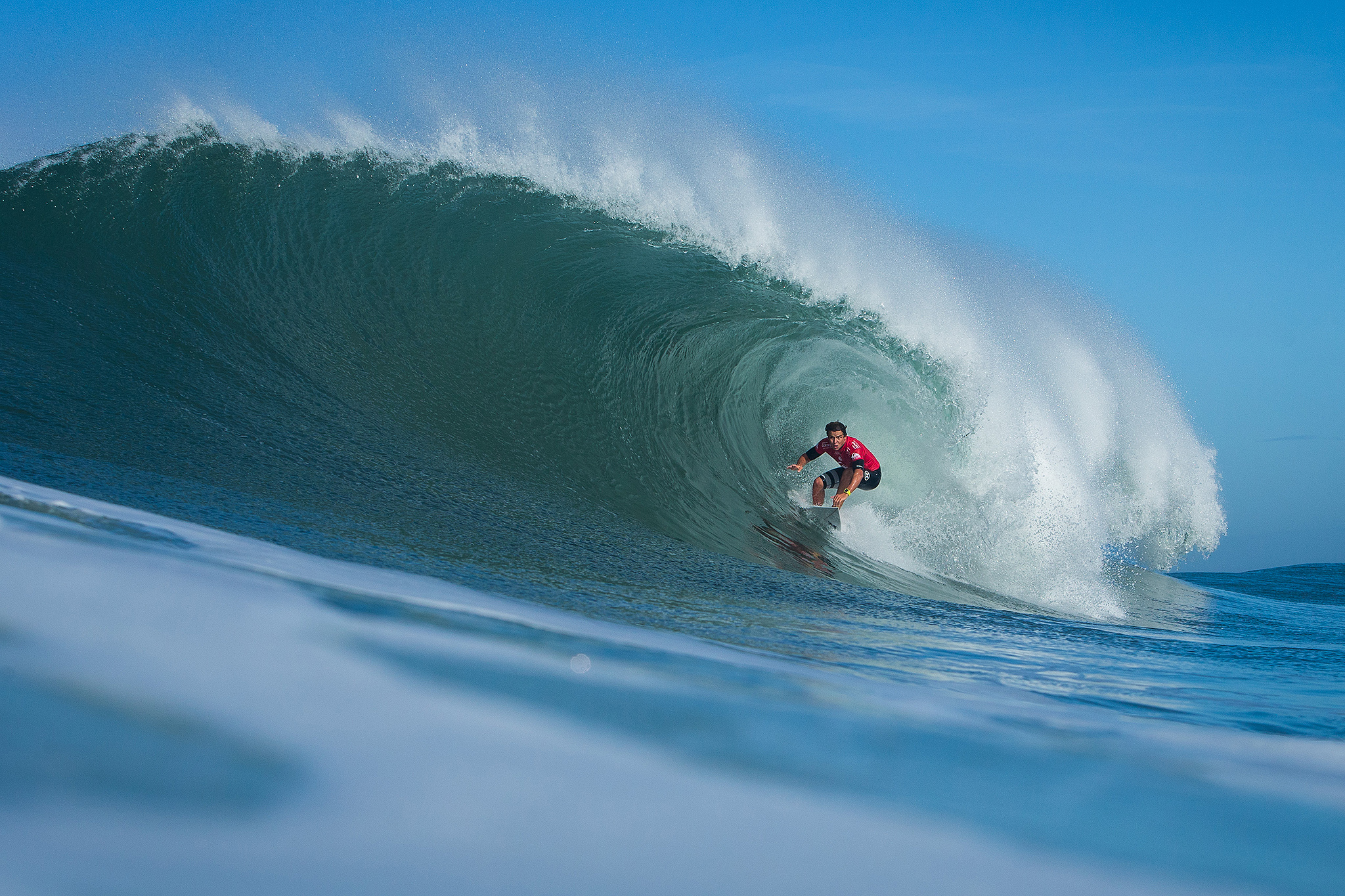 Dane Reynolds (USA), 30, followed in Wilson’s path and dominated his opening round matchup to relegate WSL No. 4 Owen Wright (AUS) to the second round. Reynolds proved lethal as a wildcard in Fiji earlier this season and will look to advance through a few more heats in the pumping French surf he adores.

“I’m definitely inspired to surf good and do my best, good waves make it exciting and I think the performance excites me,” Reynolds reflected. “A lot of time you’re at the contest area and you know the good ones are straight out or to the left or right, but we were down the beach so I had no idea what to expect. That first one came right to me and you just got to pick them when they come in, they’re good barrels.”

When confirmed as the event wildcard, Reynolds announced he would give away his entire prize-money to the NGO ‘Surfers, Not Street Children’ association in South Africa.

“They take street children in Durban (South Africa) and they provide mentorship and education all through surfing,” Reynolds continued. “I had a friend who visited them this year and suggested it. I just wanted to come here and surf on somebody’s behalf, and that kind of felt like it would be a good motivation. I have great sponsorship money and I just felt like somebody else could need it more and benefit from it.”

Brett Simpson (USA), 30, current WSL No. 35, took an important win in the opening heat of competition over 11-time World Champion Kelly Slater (USA) and last year’s runner-up in France Jadson Andre (BRA). Simpson, currently sitting outside the requalification Top 22, will need big results in the last three events of the WSL CT season to remain amongst the world’s best in 2016.

“First heats are always hard, it was a bit foggy this morning and I didn’t really have a freesurf,” Simpson said. “It’s really fun, there’s peaks everywhere and I was able to get two good waves. I almost made a mistake at the end, I had priority and Kelly got a wave, I made the decision not to go and he almost got the score. I haven’t had much success as of late and it feels great to get a win. It’s nice when the waves are like this and you’re excited and you get good barrels.” 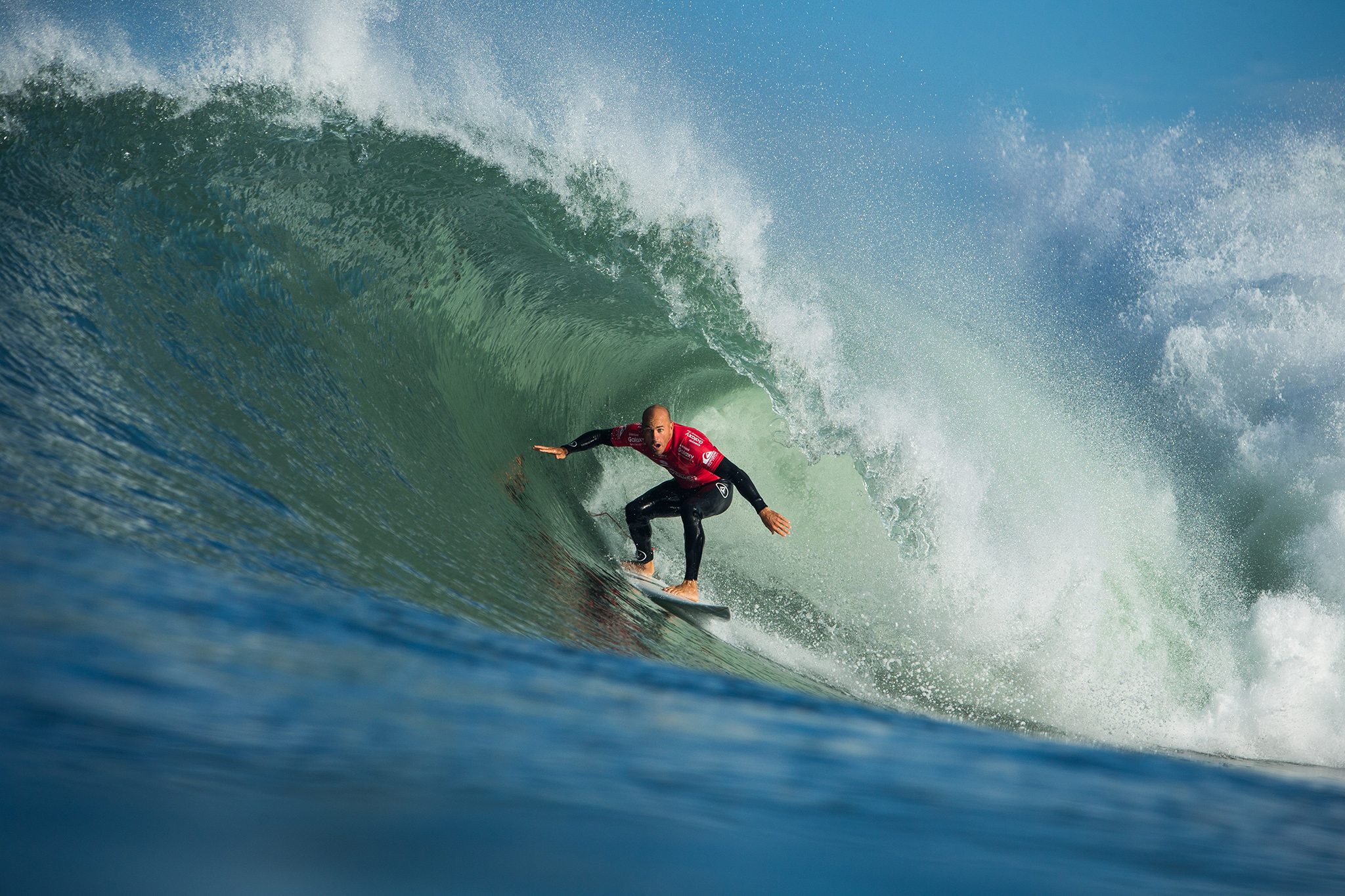 Event organizers will reconvene tomorrow morning at 8am to assess conditions.

The Quiksilver and Roxy Pro France is webcast LIVE on worldsurfleague.com and via the WSL app. 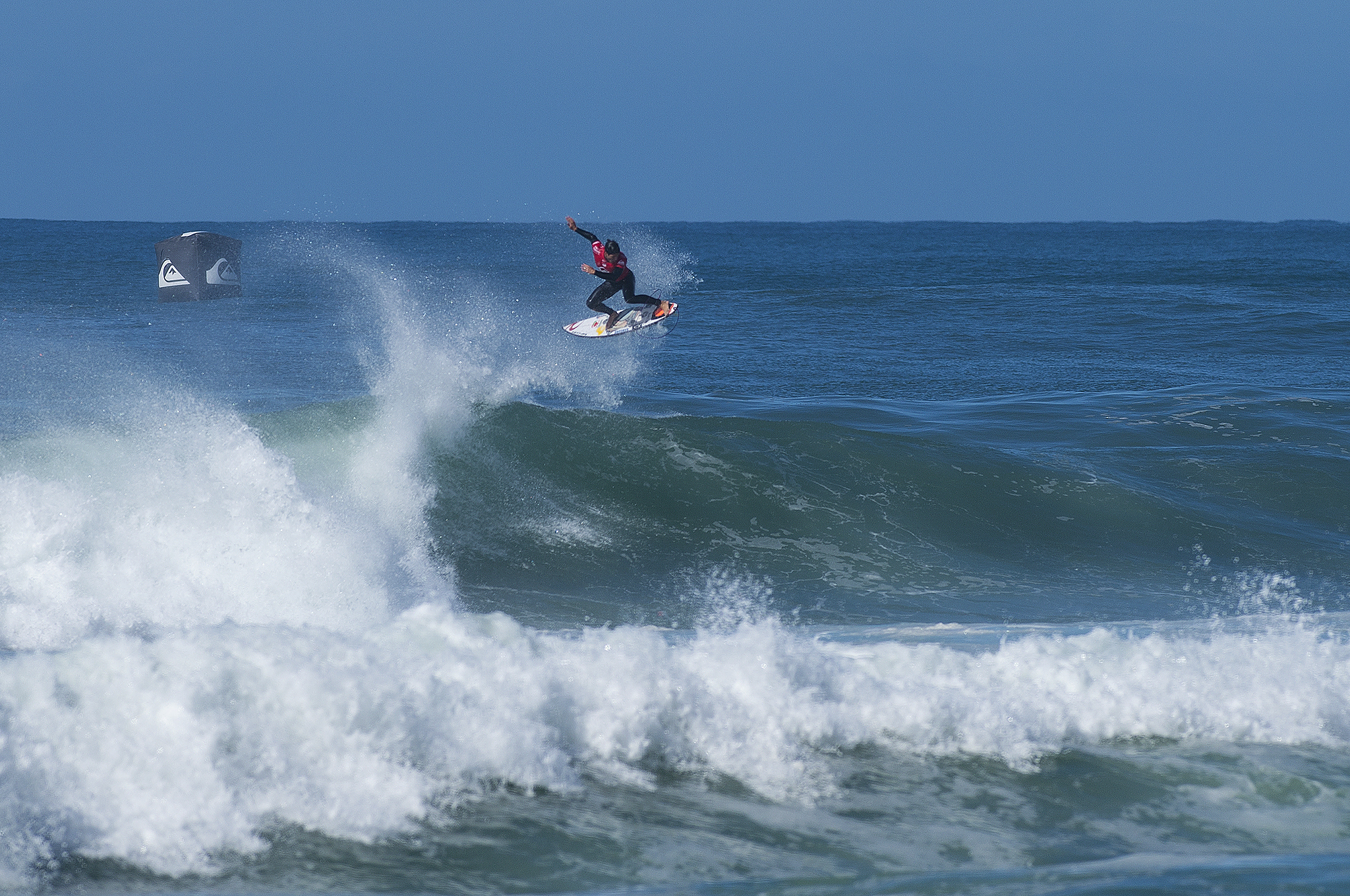