Surfing and Hollywood have never been easy bedfellows. To represent our zealously guarded subculture to the masses has rarely worked out all that well. Surfing, like the extreme sports subcultures it inspired, don’t favour being paraded for the mainstream. Sure the recent documentaries have kind of worked but the great Hollywood surf film remains to be made. Join us on a romp through the celluloid highs and lows of Tinsel Town’s dalliances with the glide. This list is by no means exhaustive, just the films that have had an impact. 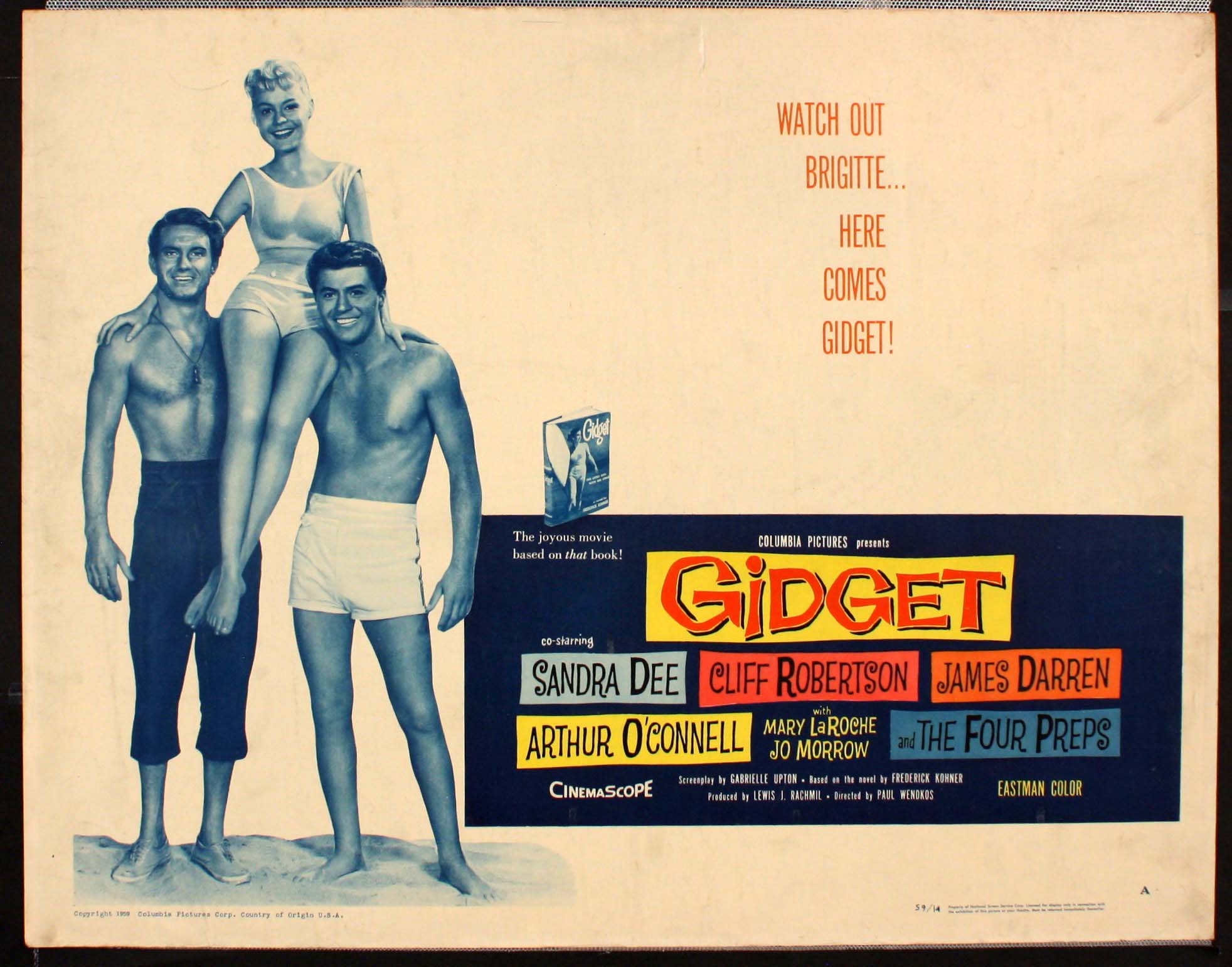 GIDGET (1959)
Few of you reading will be old enough to remember the first foray of Hollywood into the fledgling Californian surf culture.
Inspired by a real girl, Kathy Kohler, Gidget was based on the half million selling book written by her father Frederick. He wrote the book after listening to her tales of the Malibu scene. Cheesy as it was the tale of a cute girl discovering boys and surfing was a nationwide hit. It’s widely regarded as the film that alerted America to the fact there was more to the beach than just sun-baking and swimming; ushering in the classic ‘surfing sixties’ era when the Beach Boys and Californian lifestyle were the envy of the world. Legends like Mickey Dora, Mike Doyle and Micky Munoz featured as stunt doubles. Ironically the ‘Malibu’ tale was filmed up the coast as Malibu was already too busy. Perversely Surfer magazine debuted the following year.
Factoid:Gidget is a contraction of girl-midget as she stood a towering five foot tall. 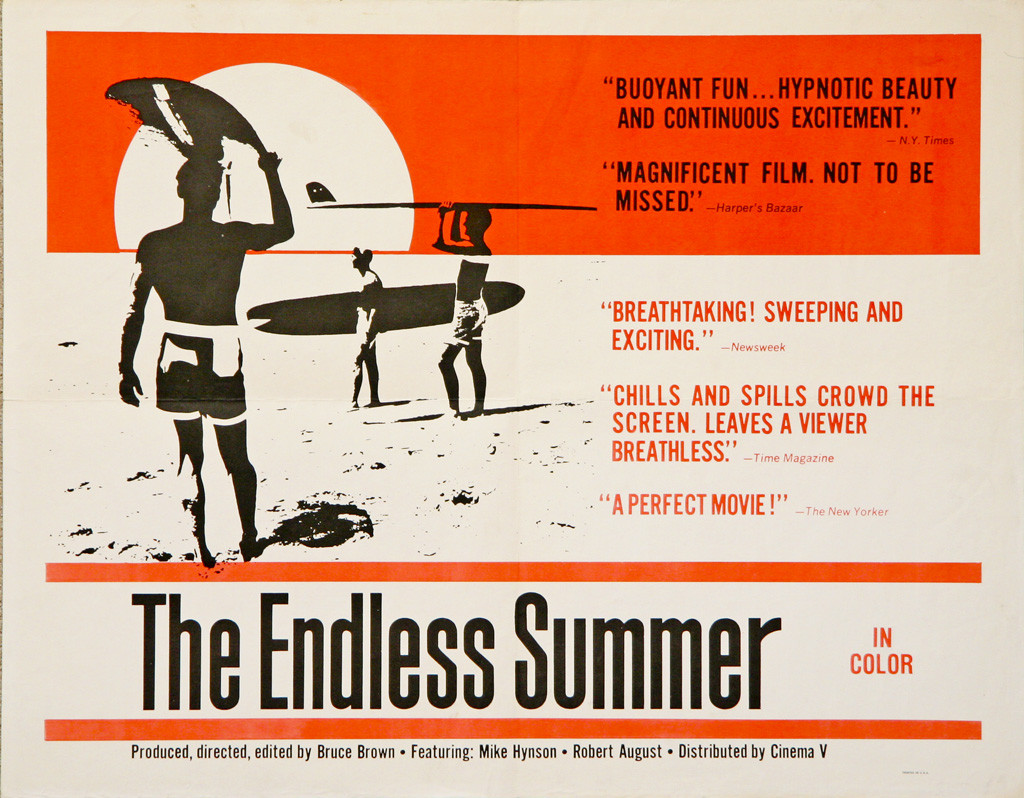 ENDLESS SUMMER (1964, theatrical release 1966)
Bruce Brown’s iconic all-time classic is that rare beast: a pure surf movie that became a mainstream success. Even though stripped back it’s a simple travelogue following Robert August and Mike Hynson searching the world for the perfect wave it captured the essence of surfing like no film before or since. After being toured around the beach towns, as was the way in those days, it was test screened in Kansas in winter. It went down so well it was blown up to 35mm for the proper cinema crowd and put on general release. The one man crew film cost $50,000 to make and went on to make $30 million. Not a bad for a filmmaker in his late twenties. Even today the imagery, narration, music and poster design are timeless. It’s one of the few essential movies every surfer should watch. 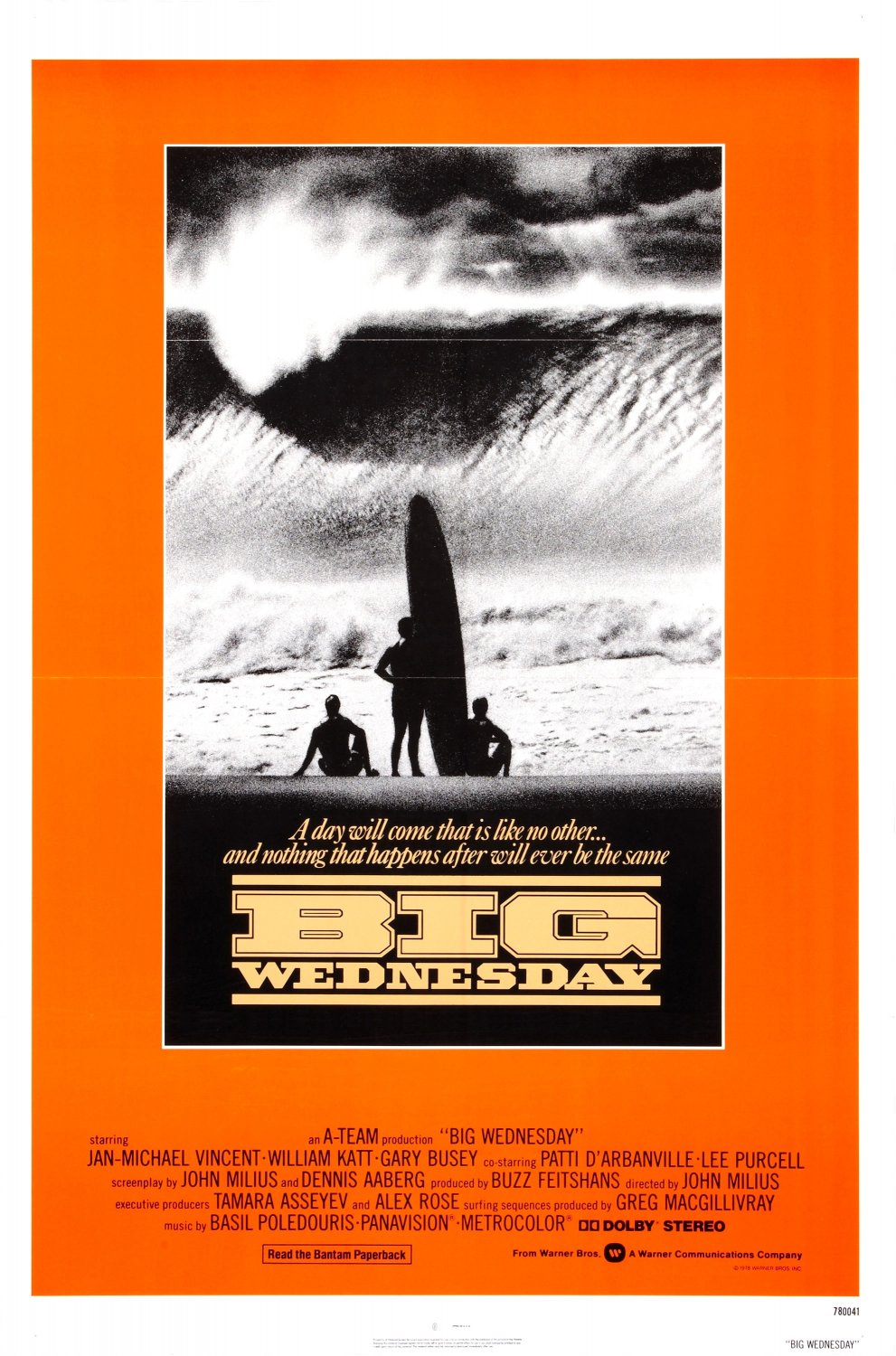 BIG WEDNESDAY (1978)
Big Wednesday is beloved by many. Directed and co-written by John Milius it’s coming of age theme hits home with all surfers. Weirdly it was a flop at the cinema and became a cult success once home video took off. It’s one of those films that’s gifted us with many much repeated quotes. In the limited pantheon of Hollywood surf films that aren’t stinkers this is probably the most rounded feature film. Surfing is the one thing that can glue friendship together no matter what life throws our way.
Factoid: Milieus and friends George Lucas and Steven Spielberg exchanged a percentage point of the income from their upcoming movies 1977 Star Wars and Close Encounters of the Third Kind. They were both convinced it was going to be a huge hit. So while the surf movie tanked that deal must’ve been quite a zinger as those other directors did ‘okay’. 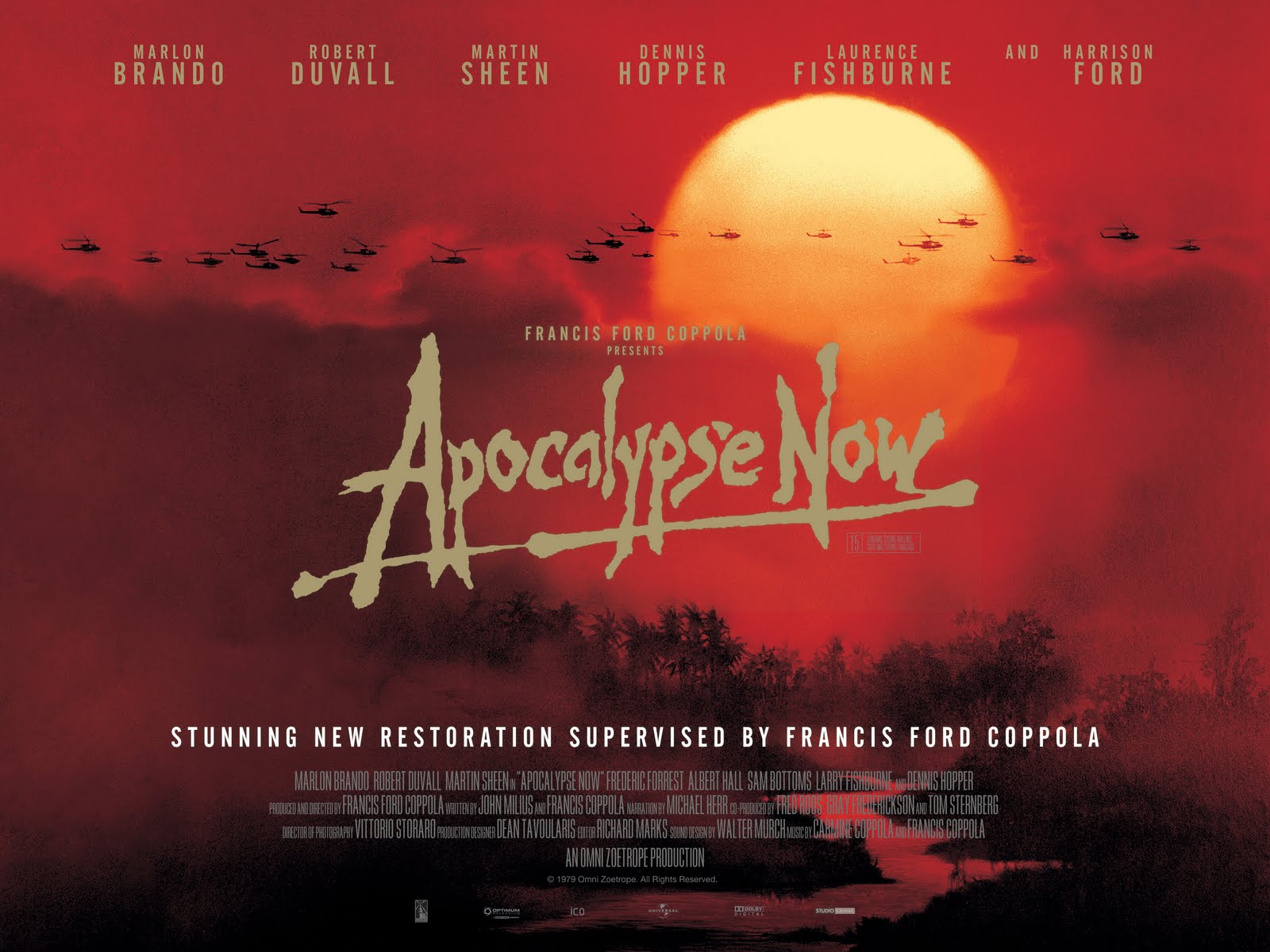 APOCALYPSE NOW (1979)
Surfing is an element, not the focus, of Francis Ford Coppola’s legendary film. But it is possibly the strangest bit of surfing committed to celluloid. The classic ‘I love the smell of napalm in the morning’ scene is delivered by Colonel ‘Charlie don’t surf’ Kilgore in the midst of a battle to secure a Vietnamese beach village so they can surf the river mouth peaks. People surf as shells explode around them. All kinds of bonkers. Written by Big Wednesday man John Milius it was nearly directed by George Lucas but he got Star Wars green-lit and went on to do that instead. The film is also credited with introducing surfing to the Philippines where the ‘Nam scenes were filmed. 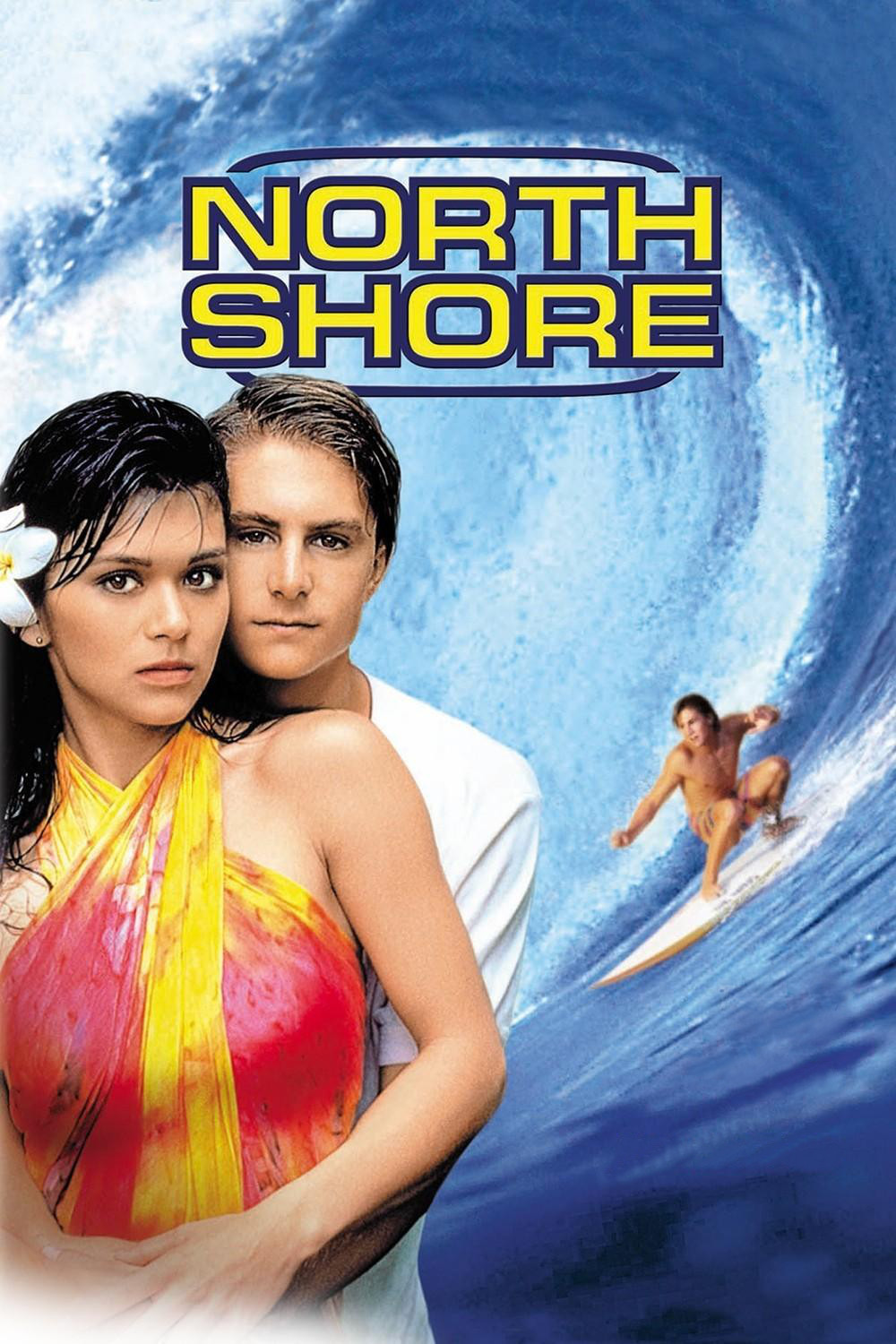 NORTH SHORE (1987)
Possibly the best cheesy surf movie ever. Rick Kane’s odyssey from Arizona wave pool hero to the learning the ropes on the fabled North Shore is essential viewing for all surfers. Mainly so you can know when other surfers are dropping one of the many quotable bits of dialogue. That and it’s a handy guide to learning Hawaiian pidgin. It features cameos from many legends like Occy, Pagey, Laird and Lopez. A perfect time capsule of eighties surfing and something you gots to see. 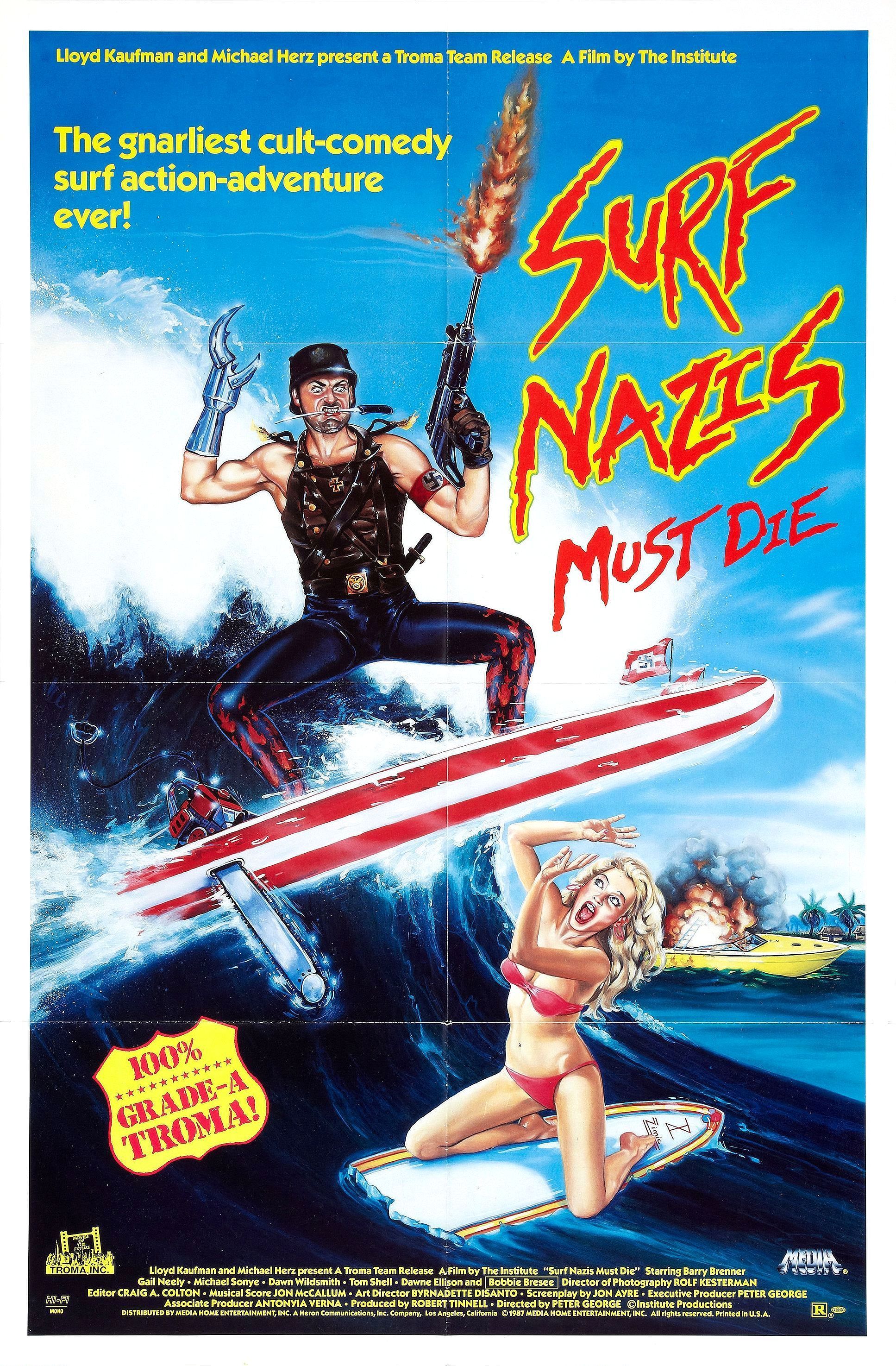 SURF NAZIS MUST DIE (1987)
The best slash worst surf B-movie ever made. Surf Nazis was made seemingly on a budget of about a tenner. The surf ‘gangs’ tend to have a maximum of four people in them and it’s utterly hilarious in it’s own mad post apocalyptic way. The eighties was the era of home video becoming a big thing so polished turds like this could get released straight to video without having to be good enough to be in cinemas. A definite winner of the so bad it’s good category. 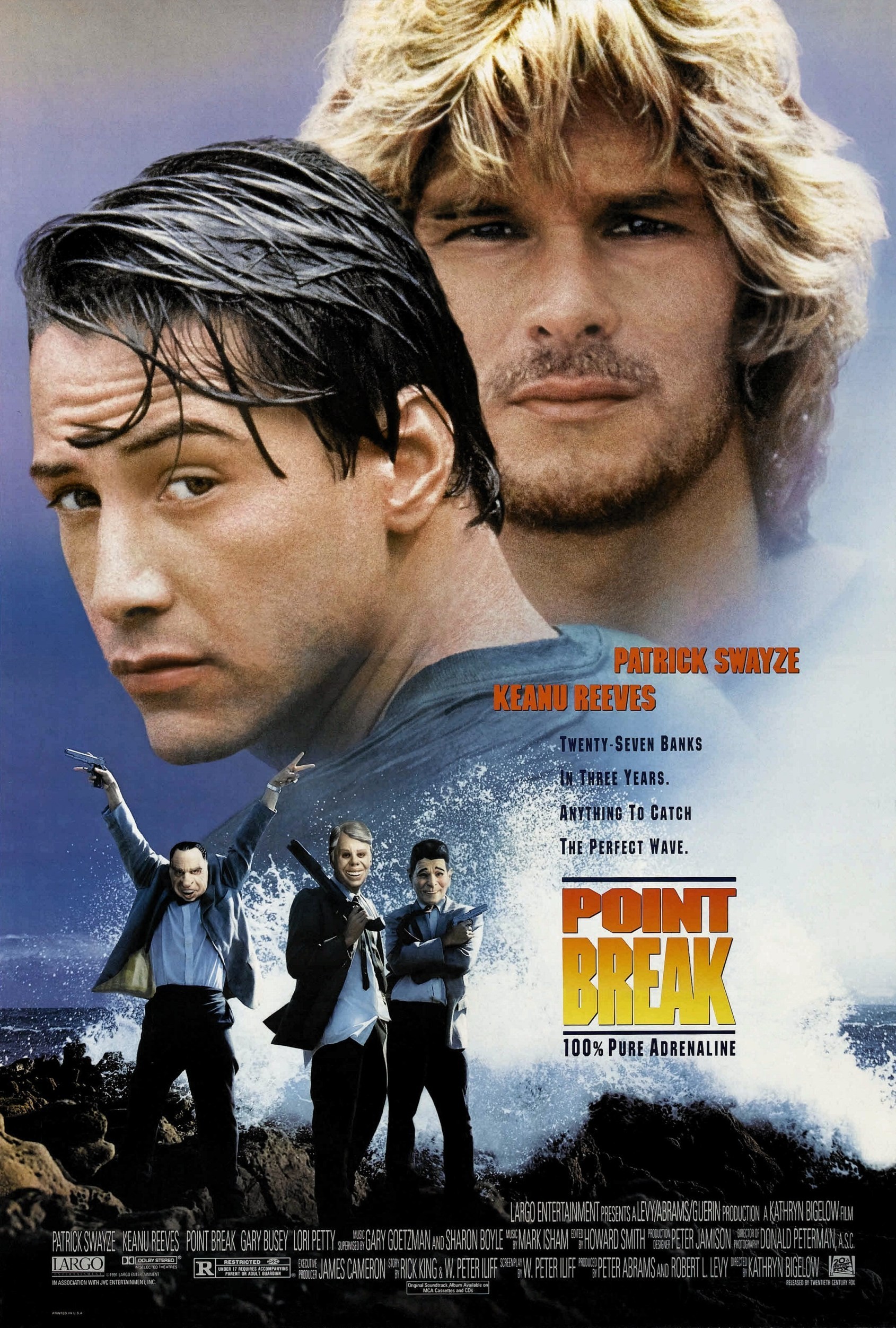 POINT BREAK (1991)
Kathryn Bigelow is more famous for the epic Iraq movie The Hurt Locker but she cut her action teeth on this crime surf caper that has a place in our hearts no matter how wrong it might be considered by some. The late Patrick Swayze is perfect as the groovy villain Bodhi and Keanu is as wooden as ever but it works. It’s a pop corn film about bank robbers that surf a bit. You have to have seen it, just so you can have an opinion. It does feature the immortal line from Utah, ‘Wars of religion always make me laugh because basically you’re fighting over who has the best imaginary friend.’ Keanu actually learned to surf for the movie and still does. Swayze also did his own skydiving stunts.

ENDLESS SUMMER 2 (1994)
The reboot of Endless Summer followed Robert ‘Wingnut’ Weaver and Pat O’Connell on a modern version of the original. Whilst appreciated by surfers it didn’t hit the box office like the original. Bruce Brown’s son Dana went on to make Step Into Liquid which is kinda Endless Summer 3. 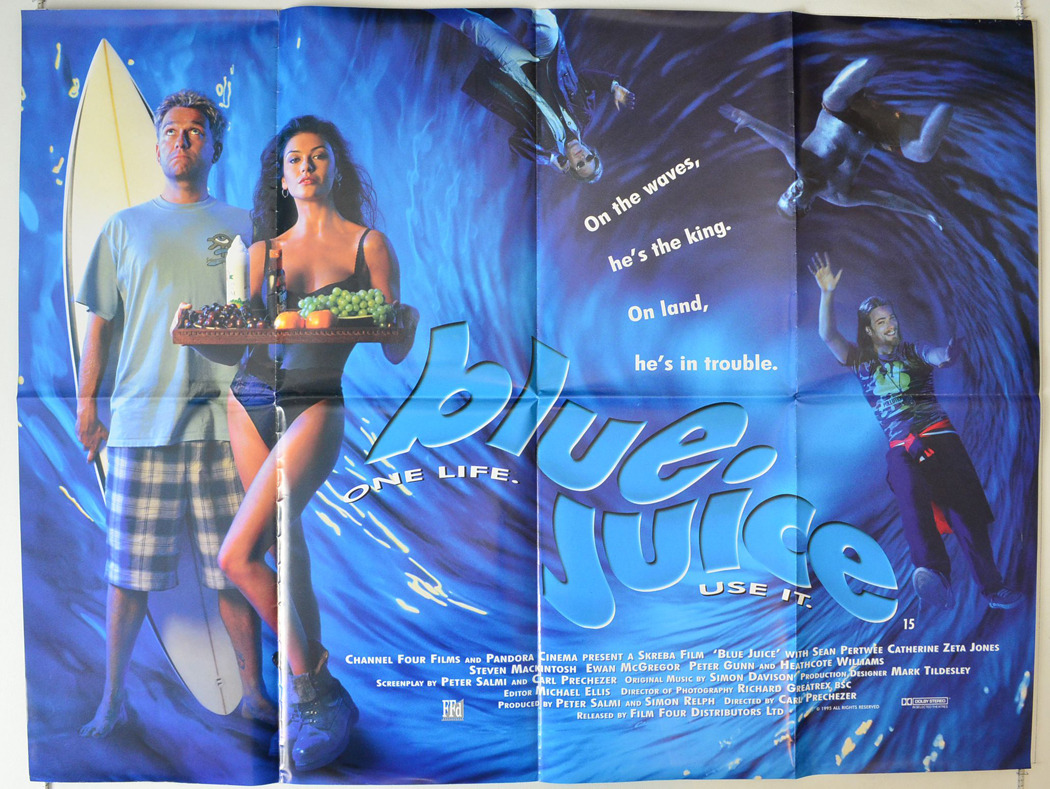 BLUE JUICE (1995)
The lone Cornish entry in the mainstream movie field has, in retrospect, a pretty heavyweight cast. Catherine Zeta Jones and Ewan McGregor went on to be global megastars. It’s actually a good film, funny dialogue and a story that all surfing couples can relate to. The pressures of growing up and being a productive member of society versus the head in the clouds surf obsession. Many local Cornish faces are in there as extras.

IN GODS HANDS (1998)
You know… There’s a wave…
Shane Dorian might be an all time surfing MVP and hero to many but in some surfer’s closets is an embarrassing Hollywood outing. This was Dozzas. The surfing at least doesn’t involve stunt doubles and is well shot. It’s only the dialogue that’s ugly. Directed by an erotica specialist, Zalman King, more famous for 9 & A Half Weeks, it was written by surf journo Matt George who also starred. It tanked hard at the box office. Reviews featured words like: turgid, pretentious, abysmal, tepid, bogus and vapid. Suffice to say it never made the 10 mill back it cost to make. It did at least feature the likes of Shaun Tomson, Brian Keaulana, Darrick Doerner, Brock Little and Mike Stewart.
Factoid: The production company was owned by Charlie Sheen and that Bret bloke off of Poison. So they could afford to take the hit.

BLUE CRUSH (2002)
Seeing as the first surf movie was about a girl surfer it’s pretty poor it took over forty years for there to be another one. Whilst the story is forgettable the surfing is well shot and it inspired a generation of women to get in the water. We were there on the North Shore they were shooting it and somehow the shot Sonny Miller took of Sharpy pretending to shoot photos never made the final cut… The swines.

RIDING GIANTS (2004)
A rarity as a documentary that made it to big screen. If there’s one thing that really works on the big screen it’s big wave surfing and Stacy Peralta didn’t disappoint. The film charts the evolution of surfing from its humble origins to the state of the art of big wave surfing in the mid-noughties. It was the first documentary film to open the Sundance Film Festival, introduced by Robert Redford himself, which after Peralta’s Dogtown and Z-Boys is no great surprise. 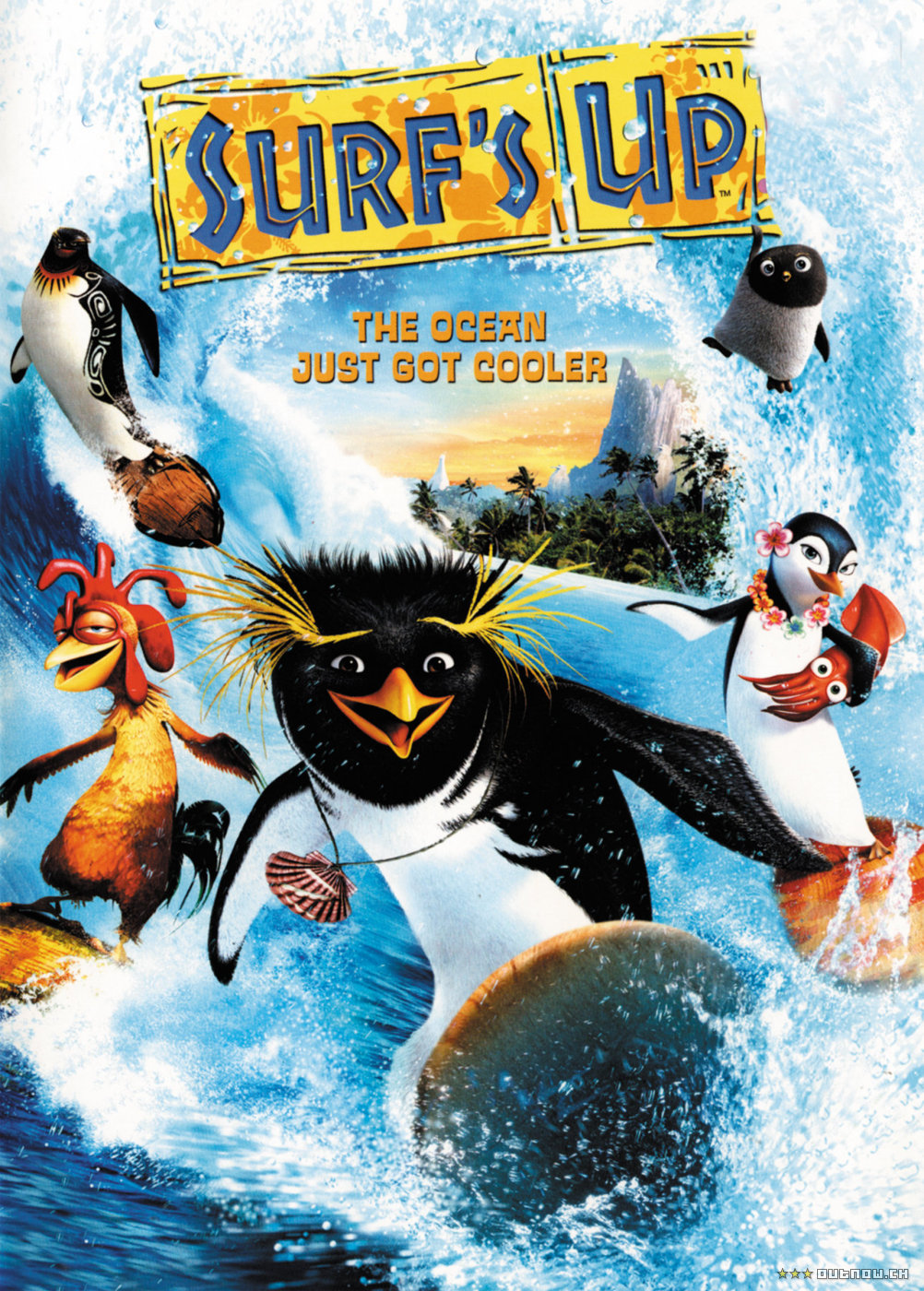 SURF’S UP (2007)
Yes. It’s an animation. But some of the best work in Hollywood is being done by the animation studios and this penguin based surf odyssey had the pull to get Kelly Slater and Rob Machado involved as cameo commentators. It’s similar tale to North Shore as the young outsider learns from a wise old surfer to beat the establishment while learning lessons on love and life along the way. It’s charming and the perfect first kids surf flick with enough surf smarts to keep adults happy.

CHASING MAVERICKS (2012)
The tragic story of Maverick’s legend Jay Moriarty should’ve been left well alone.
Factoid: According to imdb.com six Red Epic cameras were lost during filming. Not cheap that.

POINT BREAK 2 (2015)
Coming this Christmas. It faces the final instalment of the Hunger Games trilogy (in four parts) and the new totally awesome looking Star Wars. Gulp. It’s not a sequel, more an ‘inspired by’ as the criminals in the new one aren’t just surfers. They seem adept at every extreme sport known to man. Apart from kayaking and skateboarding. But who knows those could be in the final edit. Whilst the trailer has been met with universal derision and vitriolic hate by fans of the original we’ll have to wait and see if it can harness any of the charm of the inspirational material. All we know is somehow they’ve taken the incredible spectacle of huge Teahupoo and CGI’d the surfers even smaller?! Which seems a bit daft seeing as it will blow the mainstream viewer away as is.

So there you go. Over fifty years of surfing in the cinema and we’re still waiting on one that we can really be truly proud of.