Jeremy Flores (FRA) has won the Billabong Pro Tahiti in the Final bout against reigning WSL Champion Gabriel Medina (BRA) held in six foot surf at Teahupo’o. Stop No. 7 of 11 on the 2015 Samsung Galaxy WSL Championship Tour (CT) has been treated to incredible performances by the world’s best surfers, culminating today with Flores’ win.

Flores claimed the second CT victory of his career to jump up five places on the Jeep Leaderboard to 7th. One of the standout performers of the event, Flores defeated some of the world’s best surfers – Medina, C.J. Hobgood (USA), Kelly Slater (USA) and Wiggolly Dantas (BRA) – before claiming victory today. 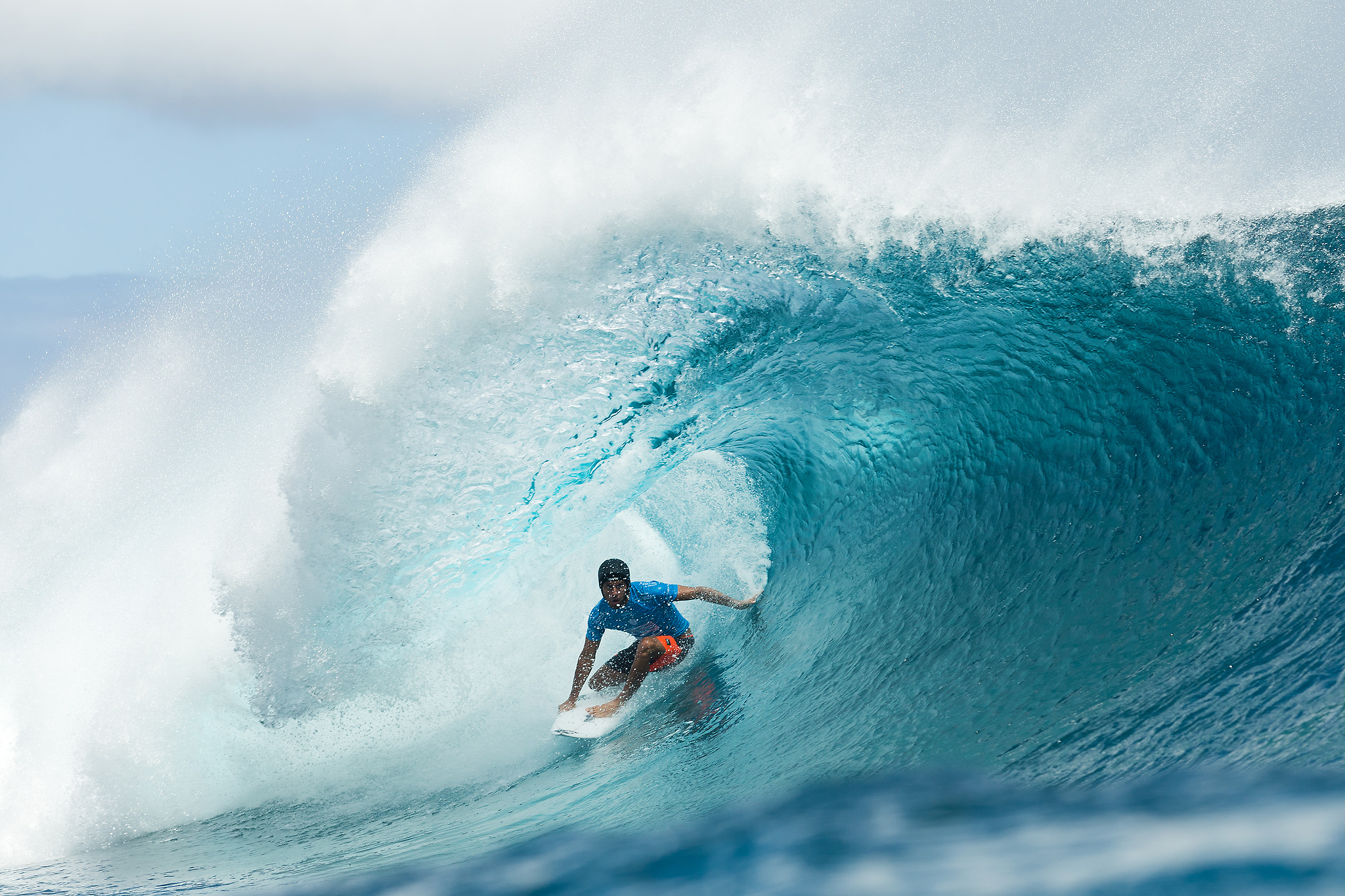 Today’s win backs up a Semifinal berth for Flores at the Fiji Pro and marks an end to a disappointing few years on the CT with his best result of the year and his first event win since the Billabong Pipe Masters in 2010. The result was made even more remarkable because Flores came into the event following a serious head injury suffered during a freesurf that forced him to miss the J-Bay Open and wear a helmet throughout competition in Tahiti.

“That 9.87 in the Final was the wave that got things started for me,” continued Flores. “I was sitting out there getting nervous, waiting for waves. I reminded myself that even if I lost the heat I’m the luckiest guy in the world to be out here. I just tried to stay calm.”

“The last couple of years I haven’t been getting the results I wanted, but more importantly I wasn’t having fun,” Flores said. “Surfing is the most beautiful sport in the world and if you’re not having fun surfing then there’s something wrong. I had to really restart and regain my mindset. I did that by being close to my family and my loved ones and it’s because of them that I got back to having fun and being hungry like I used to be. This year I’ve been out there to win it and if it doesn’t happen it’s all good.” 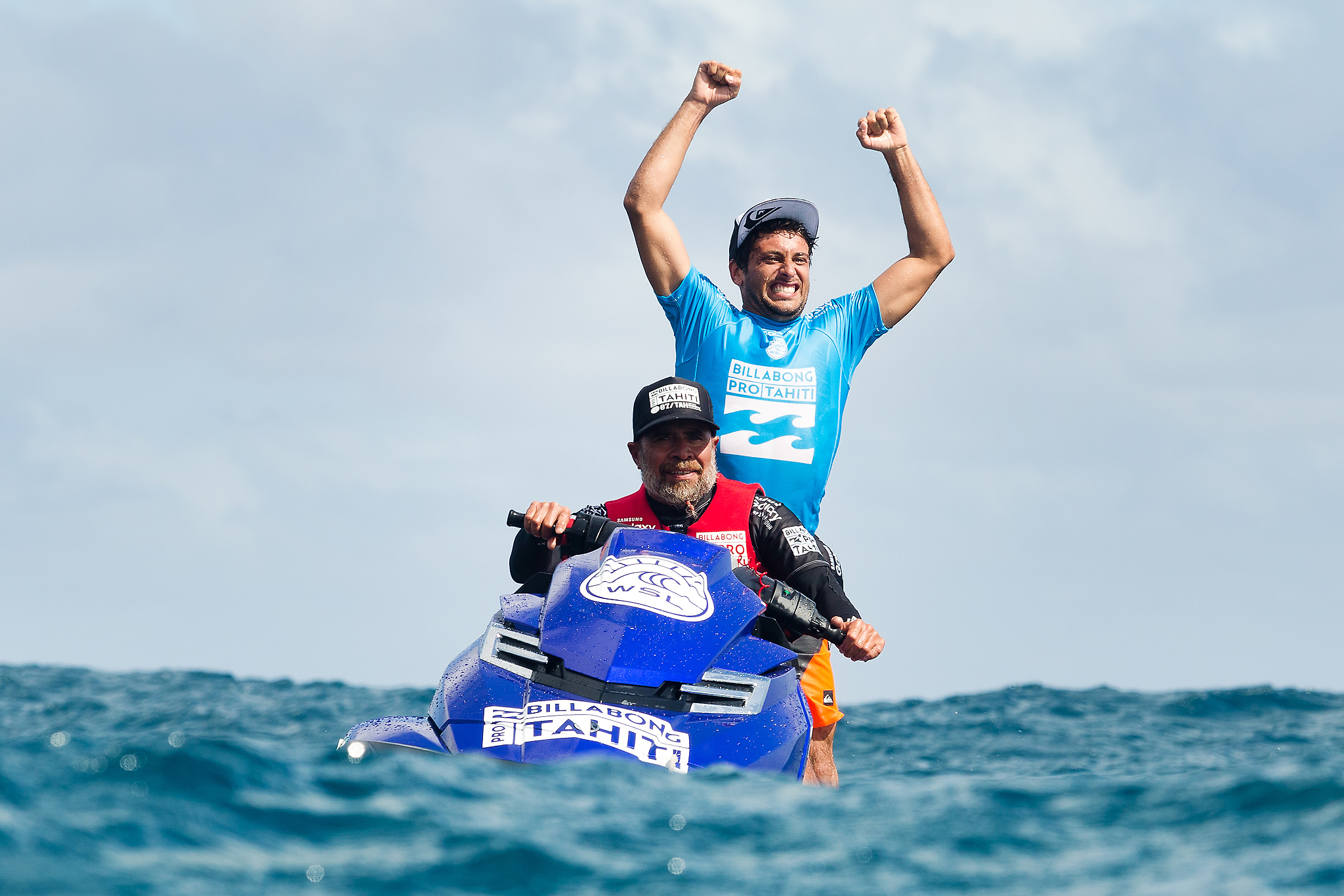 Flores came out firing in the Final, posting a near-perfect 9.87 on his first wave to put the pressure on Medina. With half the heat gone the Brazilian had only a 0.73 heat total while Flores controlled the lineup and found another solid score, a 7.00. Medina answered quickly with a tube of his own for a 7.17 but was left searching for an excellent 9.17 to turn the heat. He continued to hunt the lineup as the minutes ticked by but with only a 6.03 on offer for the 2014 event winner, Flores took the win.

“I think I made a mistake at the beginning to let Jeremy (Flores) have priority,” Medina said. “The ocean was too slow and I couldn’t find the score. I’m happy with a second place though and I’m happy for Jeremy as well especially after his injury. I’m stoked to be back on the podium. It was a tough one and I wish we had more waves but I’m happy with the result.” 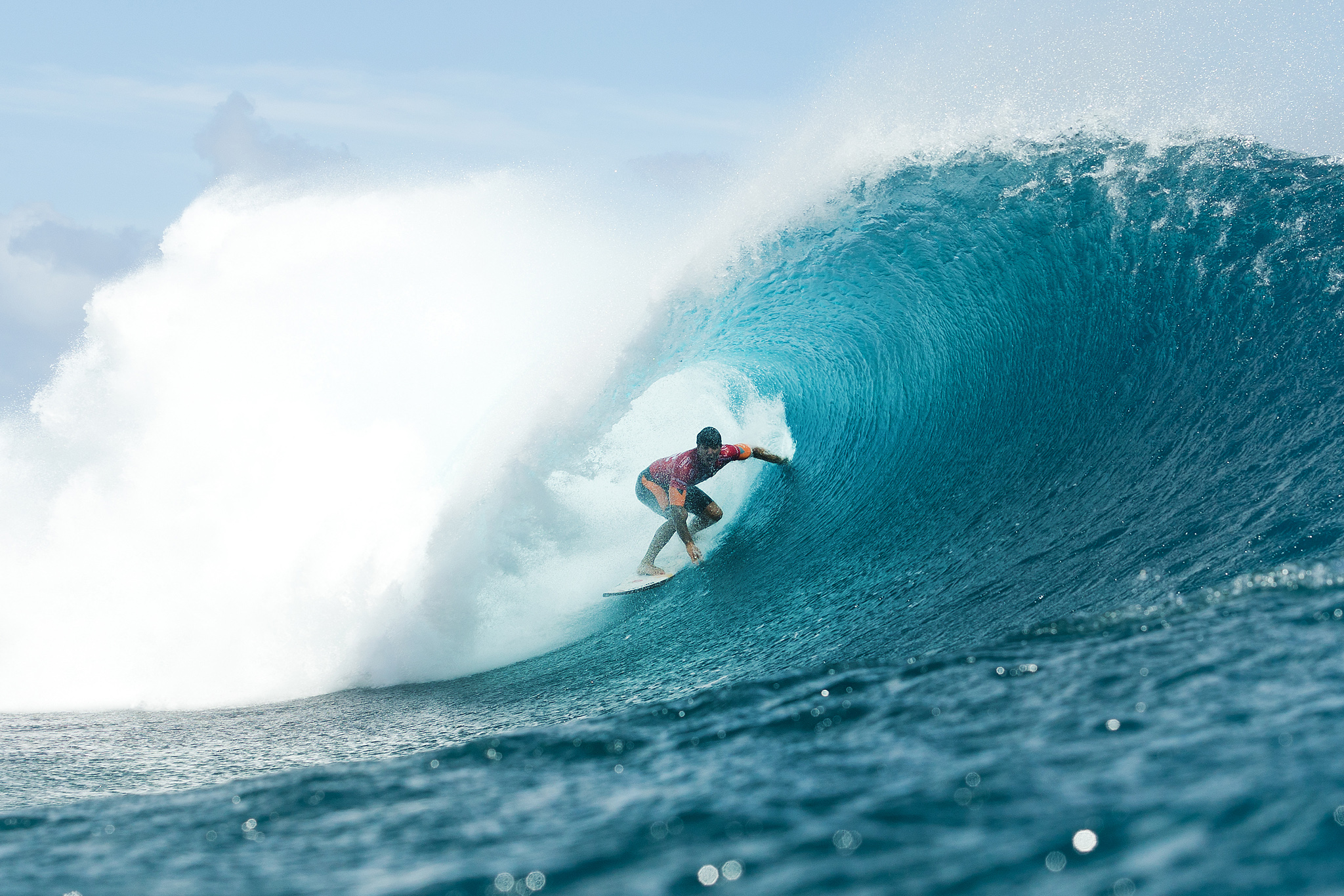 Runner-up Medina also moves up five places on the Jeep Leaderboard from 15th to 10th place. The result today is Medina’s best of the year and his first Final appearance since the Billabong Pipe Masters in 2014. He previously dispatched Owen Wright (AUS) and Kai Otton (AUS) en route to his 10th CT Final today.

Today’s Semifinal berth for Owen Wright (AUS) marks another good result for the new world no. three. Wright, who needed a runner-up finish or better to take the Jeep ratings lead, went down to Medina in the opening Semifinal. The Brazilian locked in some big scores in the opening half of the match-up to leave the Australian in a combination situation and send him home with a third-place finish.

“I wasn’t even really thinking about the ratings lead, I was just reveling in getting another heat out at Teahupo’o, especially with my good friend Gabriel (Medina),” said Wright. “I’m pretty disappointed that I didn’t get through that one. There were two waves that I fell off on that I think would have given me the score but that’s the way it goes. I more than happy with that result and we’re coming into a fun leg on the tour.” 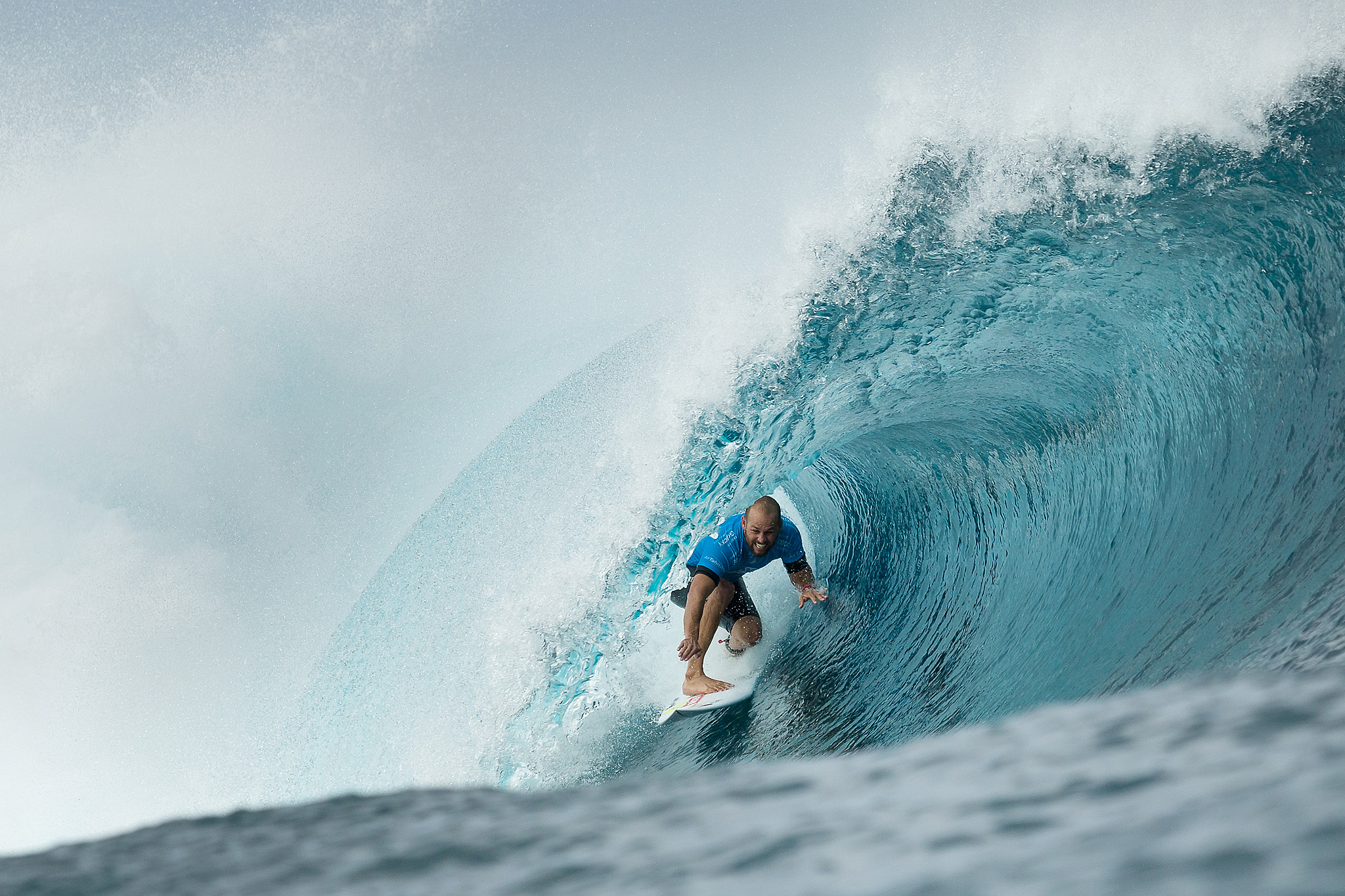 Former event winner and 2001 WSL Champion C.J. Hobgood (USA) earned his best result since the Gold Coast in 2014 after facing eventual winner Flores in the second Semifinal. Flores stayed selective and found the best two waves of the heat for a commanding lead and the win. A third-place finish for Hobgood, who defeated Aritz Aranburu (ESP) and Josh Kerr (AUS) today before facing Flores, sees him move up ten place from 36th place on the Jeep Leaderboard to 26th. It was a dream run at the Billabong Pro Tahiti for Hobgood, after claiming his first man-on-man heat win of the year in Round 2 and the only Perfect 10 of the competition in Round 3.

The Andy Irons Most Committed Performance Award is given out every year to the standout surfer of the Billabong Pro Tahiti. Previous winners include Owen Wright (2014), John John Florence (2013), Ricardo dos Santos (2012) and Jeremy Flores (2011). This year’s award goes to Hobgood for his commitment, passion and courage during the event.

“It’s just been awesome,” said Hobgood. “To have the opportunity to be here and compete and be part of the Final day is just so rad. I’m so stoked, I think I’m as stoked as if I won the event. It was really, really fun, enjoyable and challenging to be here every year and be part of the learning curve at Teahupo’o over the last two decades. That means a lot to me right there. Last time I made the Final out here was with Andy (Irons) when he won and he was really emotional. That moment I shared with him will be with me for the rest of my life.”

11-time WSL Champion Kelly Slater (USA) was defeated in the Quarterfinals by an in-form Flores. Slater had the edge but Flores posted an 8.23 in the closing minutes to eliminate the four-time event winner, who takes home a fifth-place finish. The result sees Slater remains at no. 6 on the Jeep Leaderboard.
“We had two different game plans in that heat,” said Slater. “It looked like he was going to patient and I was going to keep active. His wave just had more of that wall. I caught that one wave and I fell so I don’t know how that would have been scored. Jeremy’s had some of the highest scores out here and he’s definitely one of the guys to beat so I knew it would be a hard heat.”

Italo Ferreira (BRA), the highest ranked rookie on Tour, achieved back-to-back Quarterfinals appearances today after defeating compatriot Filipe Toledo (BRA) in Round 5 before going down to Wright. Ferreira also made the Quarterfinals in Fiji and the result sees him move to 8th place on the Jeep Leaderboard.

“I just did my best but Owen (Wright) is amazing,” said Ferreira. “I’m super stoked, it’s my first time here and that was a great result for me. I just want to keep it going for the next two events and I’m going back to Brazil to get ready.”

The next stop on the 2015 Samsung Galaxy WSL Championship Tour will be the Hurley Pro at Trestles from September 9 – 20, 2015.