The world’s best surfers battled dangerous conditions at Teahupo’o as competition ran through Rounds 3 and 4 of the Billabong Pro Tahiti, stop No. 7 on the 2015 Samsung Galaxy World Surf League (WSL) Championship Tour (CT). Four surfers earned a direct advance to the Quarterfinals and the stage is set for a thrilling Finals Day tomorrow, beginning with Round 5. 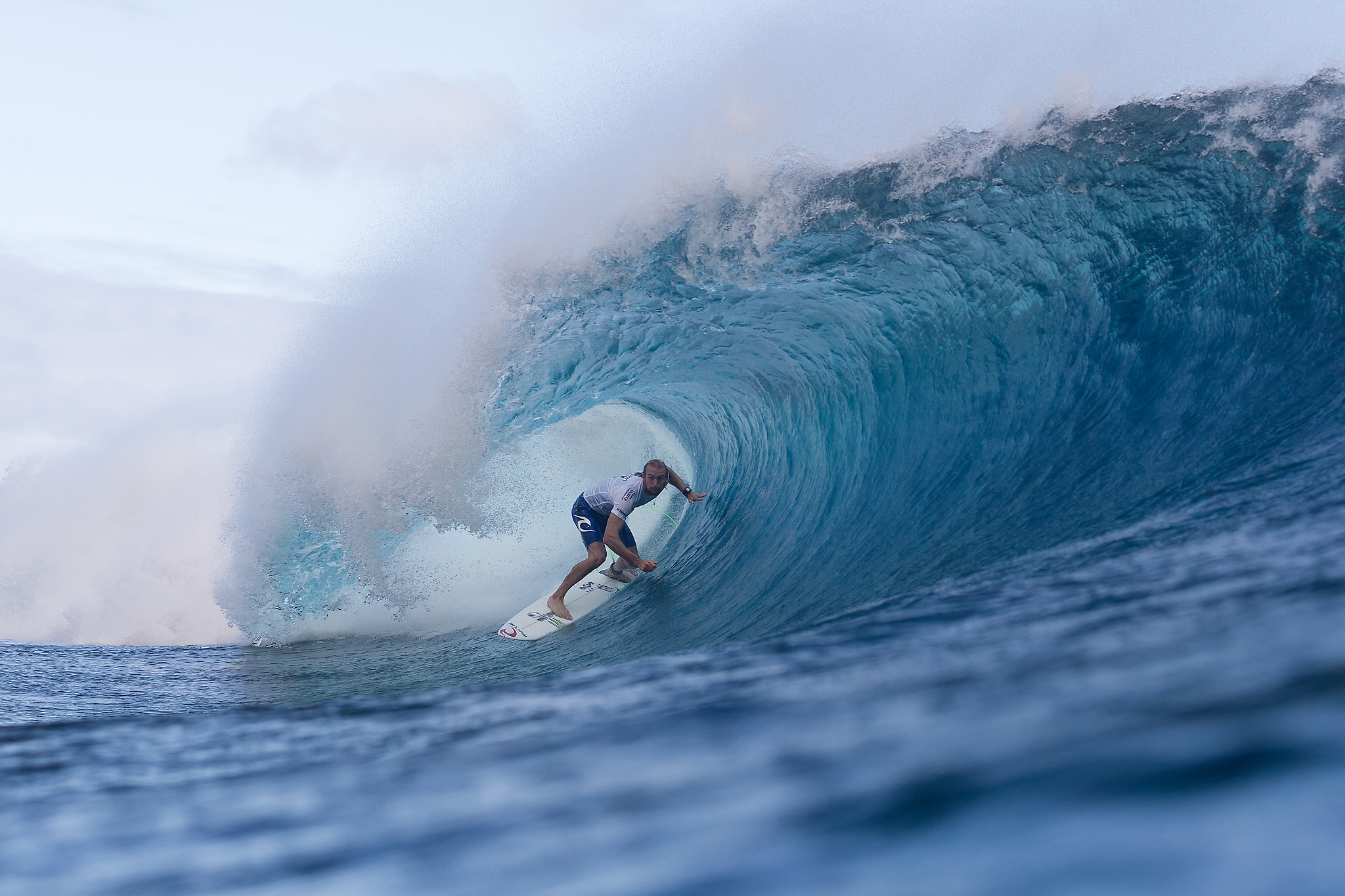 Round 4 started with a bang, as Filipe Toledo (BRA), Kai Otton (AUS) and Owen Wright (AUS) fought for a place in the Quarterfinals. The trio quickly got to work and kept busy, but it was Wright that locked in the only excellent score of the heat, an 8.17, to take the win.

“I heard Jeremy (Flores) say this morning that these conditions are really dangerous and I’d have to agree with him,” said Wright. “It’s so shallow and every time you take off you can just see the reef. It’s pretty crucial to make those waves now and that really played into that heat. I’m stoked to win because it’s the first time I’ve really utilized the three man heats this year.” 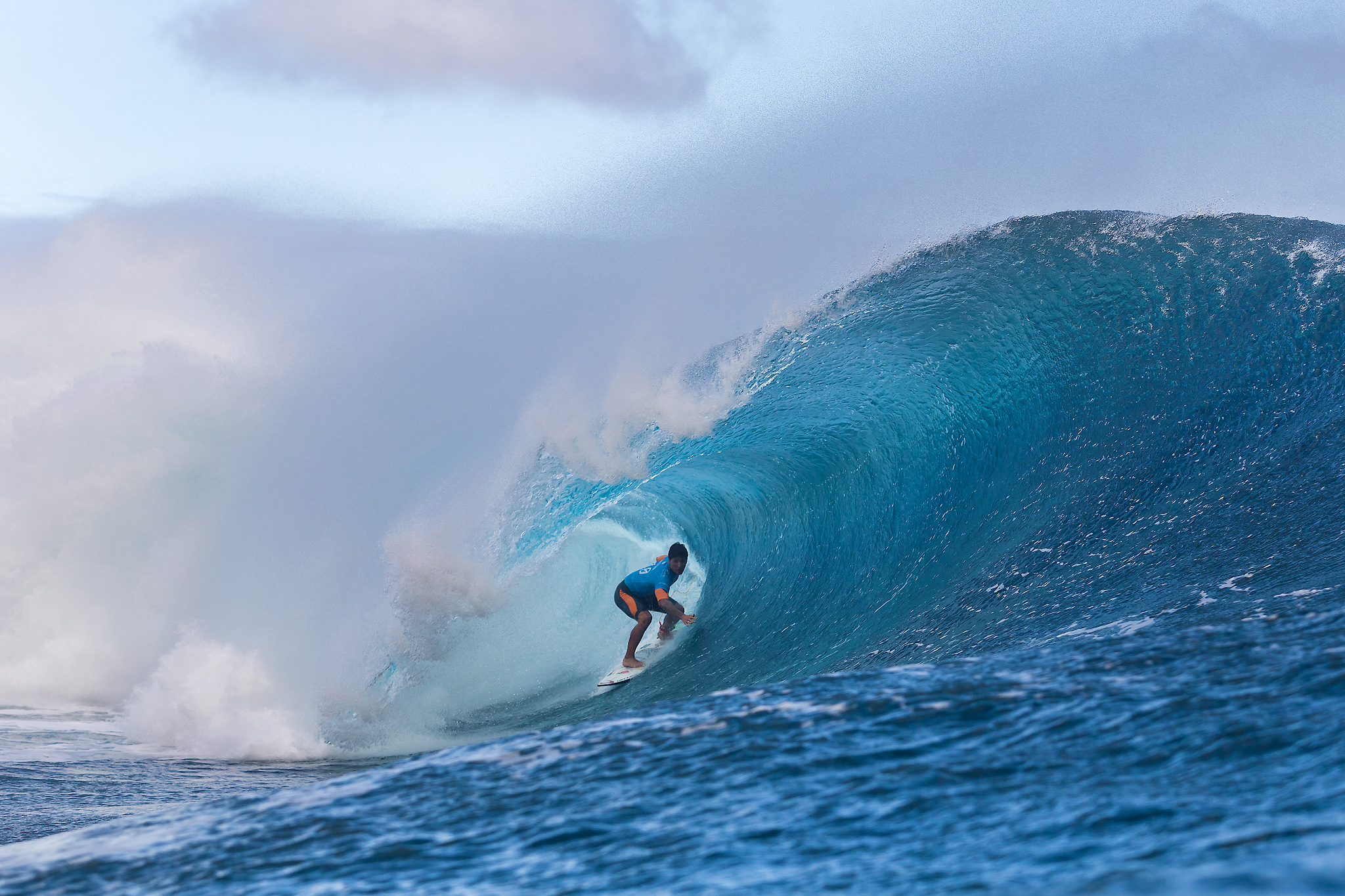 Wildcard Bruno Santos (BRA) posted an excellent nine-point ride to open Round 4 Heat 2 and put the pressure on reigning WSL Champion and defending event winner Gabriel Medina (BRA). Medina answered by finding one of the biggest barrels of the day and a near-perfect 9.97, backing it up with a 7.67 for a place in the Quarterfinals. Rookie Italo Ferreira (BRA) was left trailing behind his more experienced competitors and will surf again in Round 5 alongside Santos. 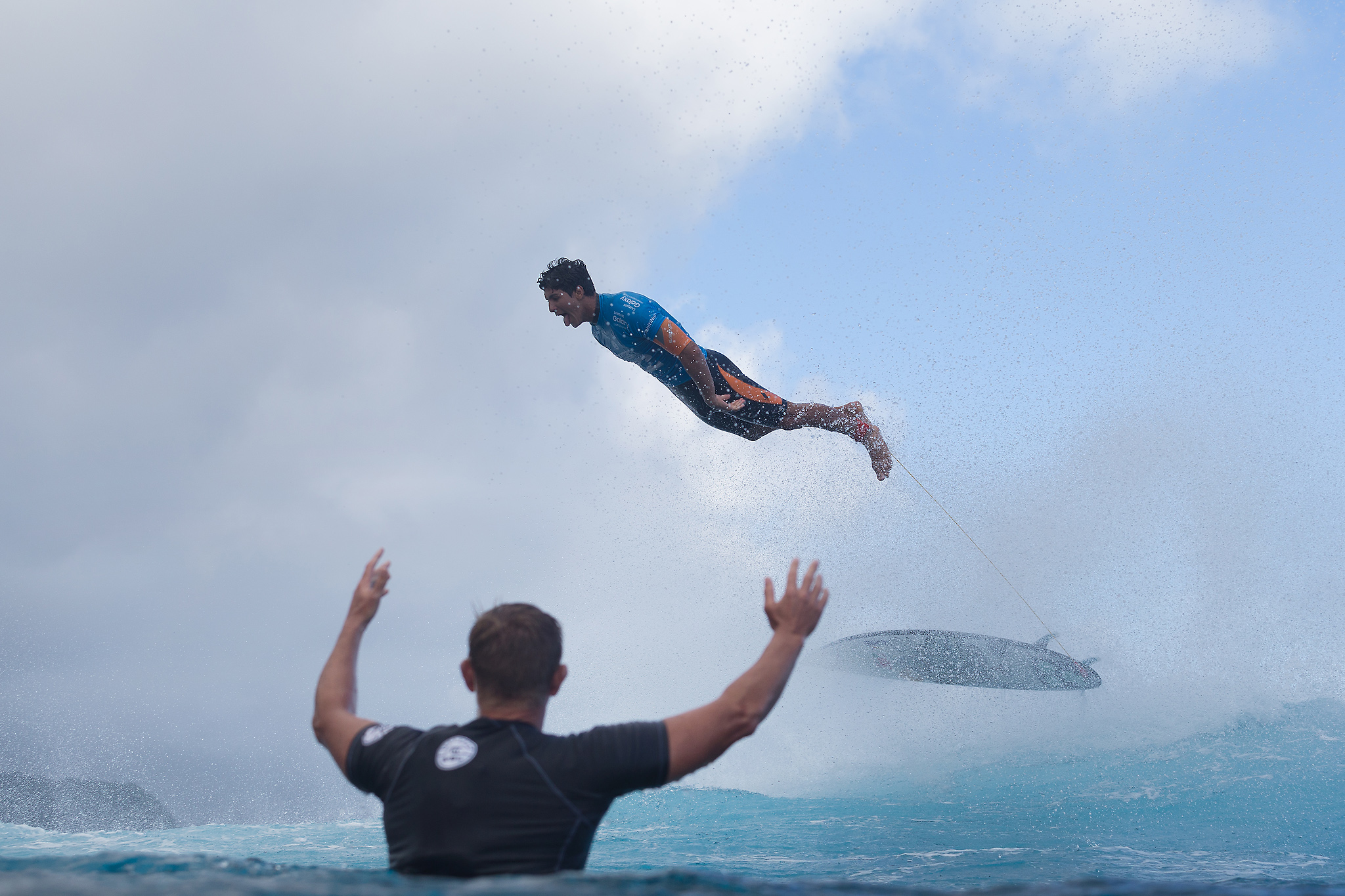 “I knew that would be a tough one, against Bruno (Santos) especially,” Medina said. “The 9.97 felt really good but then Bruno almost got me at the end. I’m really happy for the win and excited for the next Round. It would mean a lot to win here again because I love this wave. It feels good to be out there and getting a lot of waves and it would be so special.”

Josh Kerr (AUS) claimed his second victory of the day in Round 4 Heat 3 and earned a place in the Quarterfinals. Kerr battled injury wildcard Aritz Aranburu (ESP) and rookie Wiggolly Dantas (BRA) in the day’s penultimate match-up after eliminating 2013 event winner Adrian Buchan (AUS) in Round 3.

“I think we all forgot how shallow this wave actually is,” said Kerr. “Now, when the good ones come it’s very shallow. I bumped the reef and I saw Ace (Buchan) do the same on his last wave. It’s been great to hang in such a beautiful place while we’ve been waiting for our next heats.”

The final heat of the day saw 11-time WSL Champion and four-time event winner Kelly Slater (USA) take on Jeremy Flores (FRA) and C.J. Hobgood (USA). After a slow start Flores was first to earn a score of significance with a 7.83. Slater answered with a 6.83 to take the lead but Flores quickly came back. Last-minute heroics from Slater netted him an excellent 9.77 and a pass to the Quarterfinals.

“Those first waves out there you don’t really want to catch them because they’re so bumpy and frothy,” said Slater. “I was doubting that 9.77 but I just went on the wave anyway. The first foam ball bounced me and slowed me down and then the next one slowed me down even more but then I made it out. I’m stoked to make it through to tomorrow and make it to the final day and I think we’re going to have even better waves.”

Hobgood, who will surf again in Round 5, claimed the first Perfect 10 of the competition in Round 3 to upset current no. 3 on the Jeep Leaderboard Julian Wilson (AUS). The 2004 event winner found his way out of an impossible barrel after the foam ball to send Wilson home in equal 13th place.

“The lineup was that tough for some reason,” said Hobgood. “Even when a wave came you didn’t know how good it was going to be. The swell is coming up, there’s so much water so it’s hard, and you have to take off deep. I didn’t care if I lost in Round 3 because I would have gone out with a 10 on my last wave at Teahupo’o.”

Flores will join Hobgood in elimination Round 5 and previously dispatched Joel Parkinson (AUS) in Round 3 with the highest heat total of the day, an 18.87, for his show of commitment and technical barrel riding.

“The wave was really hollow and gnarly and I those were conditions where you can really get hurt,” Flores said. “I’ve surfed this wave a million times so I didn’t freesurf this morning and take the risk. I’m still feeling a bit sketchy with my head injury and every time I fall it’s the first thing I think about. It’s hard because I’m definitely scared but I just have to find the right balance. On my best day I feel like I can beat anyone but every single surfer on this tour is so so good. I’m hoping and I’m training hard and if I can win an event then I’m sure I can win another one.”

First to compete tomorrow will be Filipe Toledo (BRA) and Italo Ferreira (BRA) in Heat 1 of Round 5.

Event organizers will reconvene at 7 a.m. tomorrow to assess conditions and make a call for competition.

The Billabong Pro Tahiti runs from Friday, August 14 to Tuesday, August 25, 2015 and is webcast LIVE at WorldSurfLeauge.com and via the WSL mobile app.