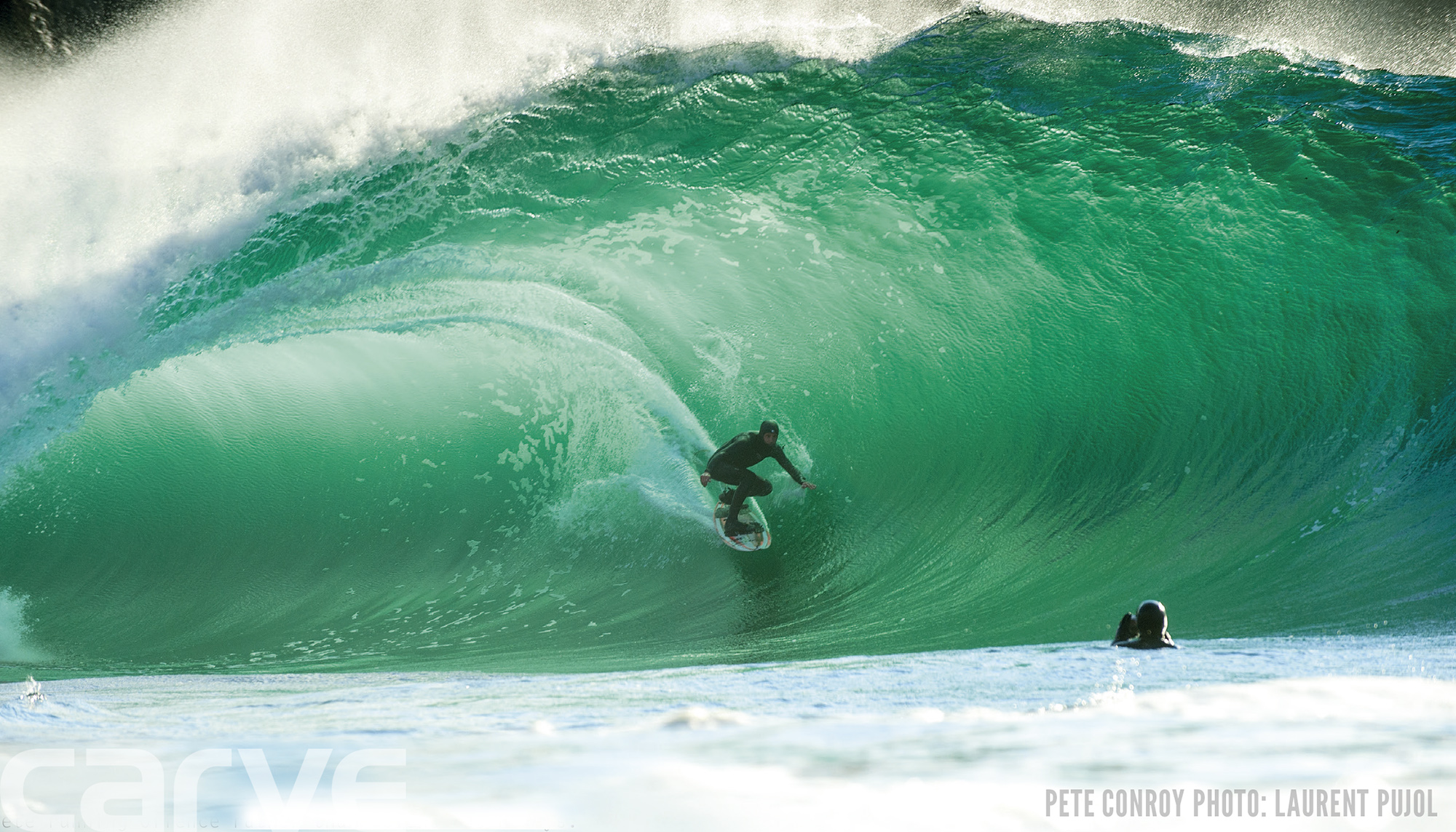 There have been a couple of incidents in Ireland recently requiring coastguard assistance. Helicopters rescued a stranded surfer from the bottom of the Cliffs of Moher and Australian pro bodyboarder Ben Player was extracted from the reef at Rileys after he managed to rupture his own spleen. The former has led to a considered response. Safety guru Peter Conroy explains…

How many serious injuries have occurred at these waves over the years?
There have been a few injuries there over the past few years with a broken back and two dislocated shoulders, near drownings from boats being flipped and skis lost. But we’ve learnt from every mistake and this is why we’re working to pre-plan for any incidents that may occur again there in the future.

How did you break your back and what happened with the rescue?
I broke my back down at Rileys and was very lucky that there was a ski out there with a rescue sled on it. This allowed us to self rescue and maintain proper in line spinal precautions. And all we needed was a ambulance that met us at the slipway. Way better than a helicopter crew putting their lives in danger by coming and trying to winch me up. Saying that on the day that if it was a worse injury I would’ve had no hesitation in ringing for them if needed.

Did that give you a new perspective on surfing?
Yes. From that day onwards I always bring my ski out when surfing critical heavy waves and have it equipped with a rescue board.

Most of the Irish based tow teams and big wave surfers are pioneers and due to the lack of visitors mainly self taught. Yet you’ve reached a level of safety and rescue that is getting the thumbs up from surfers like Dorian. How have you got there? Is it just drill, drill, drill?
We’ve all trained under the same guidelines, Glyn Ovs from Water Safety International came over a few years back and showed us a lot of rescue procedures he had learnt in California. We adopted these into the big wave surfing we’d done already and just by everyone working off the same protocol we started developing action plans for most of the big waves spots. From working in the Fire Brigade and having a degree in disaster management I was able to draft up emergency action plans and get the training procedures set up for everyone.

Which of the big four waves: Rileys, Laurens, Aileens or Mullaghmore would you say is the heaviest to surf and why?
They are all very different waves in many ways. Be it location, access, extraction, injuries sustained there. But definitely the cliffs and Rileys are the most dangerous due to the lack of access for the emergency services. Laurens … not many people are stupid enough to surf there haha! That wave is crazy. Mully is safe enough due to its close proximity to the harbour and the deep channel after the wave. That and the fact all the lads are some of the best jet ski operators in the world up there. Dylan, Barry and Paul … the place is safe when they’re out there keeping an eye on you.

The level of camaraderie among the big wave crews seems to be growing every year. Are there still a few paddle versus tow clashes or is everyone singing from the same hymn sheet?
We’re all out to get waves by any means possible, some like to paddle, some like to tow. We all get along as we’re all out there to have fun and that’s how it is.

Anyone who has been the cliffs will know how immense and treacherous they are, how was the recent helicopter rescue there?
My voiceover kinda explains this one haha, I have seen plenty of real life rescues but this one I take my hats off to the heli’ lads. Take a bow lads, unreal job done that night.

What’s the plan with the safety box – why is it a necessity at Alieens and what make this wave heavier than most when the shit hits the fan?
The box that’s going down to the bottom of the cliffs will be there to help any stranded/injured surfer maintain his injury or situation and communicate with the emergency services. Also allowing tired surfers to rest with survival gear and warm clothing/energy bars/water to maybe recuperate from a nasty wipeout or maybe just to wait until the swell dies down a bit and they can get back out. It’s there so we do not have to put the emergency services in danger by doing unneccessary rescues.

What is the relationship with the Irish Coastguard like? Are they supportive of you guys pushing boundaries?
We’ve been working very closely with the helicopter service and the Irish Coastguard in insuring safe procedures are in place for all these spots now. Hard work by the Irish Tow Surf Rescue Club has insured that there is never bad blood between the surfers and the rescue services. A mutual respect is given to each other on the basis that we understand each other’s skills and appreciation for safety in our sport.

What is the general vibe like when you get a Long brother or a Dorian turn up? Ireland is not like any big wave destinations the will have experienced before?
When they come over we treat them like our own, which they are: surfers. They play the game and that’s how it is, mutual respect is what it’s all about. They always have good things to say about trips to Ireland with the one obvious downside: the cold. They’re all a bit soft really…

The older crew have been breaking the ground and showing the way to the younger Irish surfers. How stoked are you when Conor or Ollie pull into bombs … must be pretty special?
Who you calling old?! It’s pretty amazing to watch the younger lads come up behind us and be pushing the boundaries so hard. It makes me proud to be Irish and see the respect we get from the best surfers in the world when they come over here and surf with us. I don’t think the lads like Conor, Ollie, Gearoid, Dylan Noonan, etc, get enough help and support as they should for the things there doing in our sport. Things have got to change.

Do you think these waves have been surfed as big as possible or is there still potential for more?
Not even close. There’s always going to be a better day. I just hope I’m not working when I comes. We’ve only just scratched the surface.

I’d just like to add the Irish Tow Surf Rescue Club’s main aim is to safeguard all our big wave surf spots and to maintain a level of rescue training in and out of the water. We also really appreciate all the help given to us by sponsors: Patagonia, Peli Products Ireland, Northcore and most recently Brendan Quinn who donated a collapsable stretcher to the club.
It’s is only with support from like minded people like this that we can help change minds and the way people see surfing. Not as an individualistic sport but as a team one always looking after each other out there. Any other companies out there that are willing to help us out in our goal and test their gear in the harshest environment possible please don’t hesitate to contact me through the mag. We can save lives together.