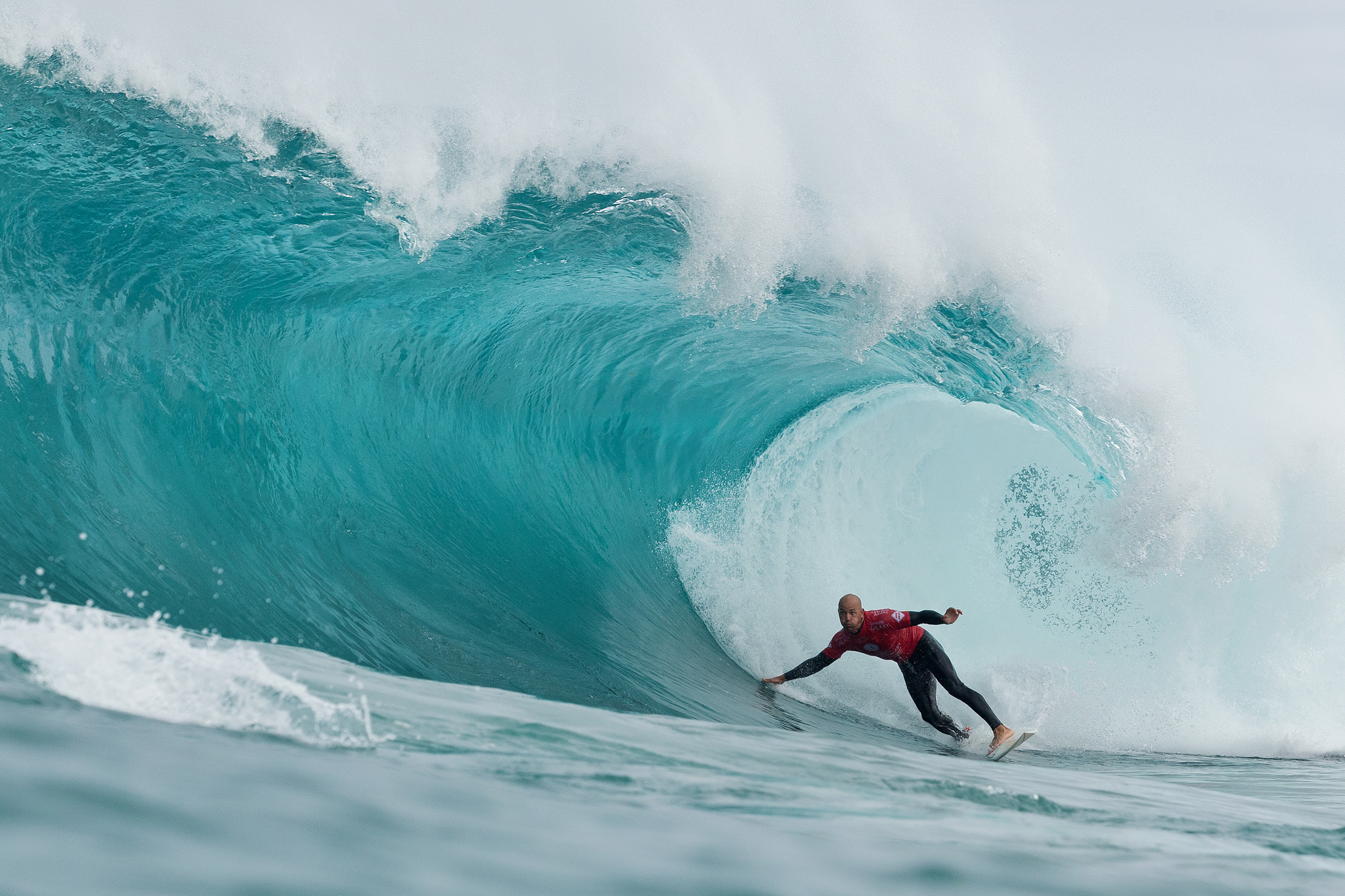 Mama Nature has a sense of humour. This much we know. With much bagging of the WSL going on after not exactly pumping surf the first two events the Margaret River event has opened with a day of mental waves… Here’s the official version:

MARGARET RIVER, Western Australia (Wednesday, April 15, 2015) – The Drug Aware Margaret River Pro, the third stop on the Samsung Galaxy World Surf League (WSL) Championship Tour (CT), got underway today and the opening 7 heats of Men’s Round 1 saw the world’s best surfers tackling one of the world’s most challenging and infamous waves, The Box. After a morning of incredible action and terrifying wipeouts competition continued at Margaret River’s Main Break with the remaining heats of Round 1.

John John Florence (HAW), who won the Margaret River Qualifying Series event in 2012, opened the day’s competition with a 7.83 for his first wave. Florence threw himself over the ledge and demonstrated his skill and commitment to take a convincing Round 1 heat win. Despite some big wipeouts Florence maintained his charging attitude to secure his place in Round 3, easily defeating Wiggolly Dantas (BRA) and Dusty Payne (HAW).

“When we got down here this morning we saw some really good waves,” said Florence. “There’s an end step, which makes it really challenging. It’s hard to pick the right waves and it’s really gnarly if you don’t. It’s definitely scary but I’m so stoked because it’s fun to surf some clean, bigger waves and amazing to get barrelled at The Box.”

Fellow Hawaiian Sebastian Zietz (HAW) found one of the morning’s best barrel rides, scoring an excellent 9.23 (out of a possible 10) and defeating Adriano de Souza (BRA) and C.J. Hobgood (USA) to earn a pass directly to Round 3.

“Adriano (de Souza) got off to a great start — I saw his first wave and it was mental,” Zietz said. “I just kept catching waves, you never know what’s going to come your way out there. Then that one came my way, I just stood tall in the first section and then I thought I was gone and I somehow made it.” 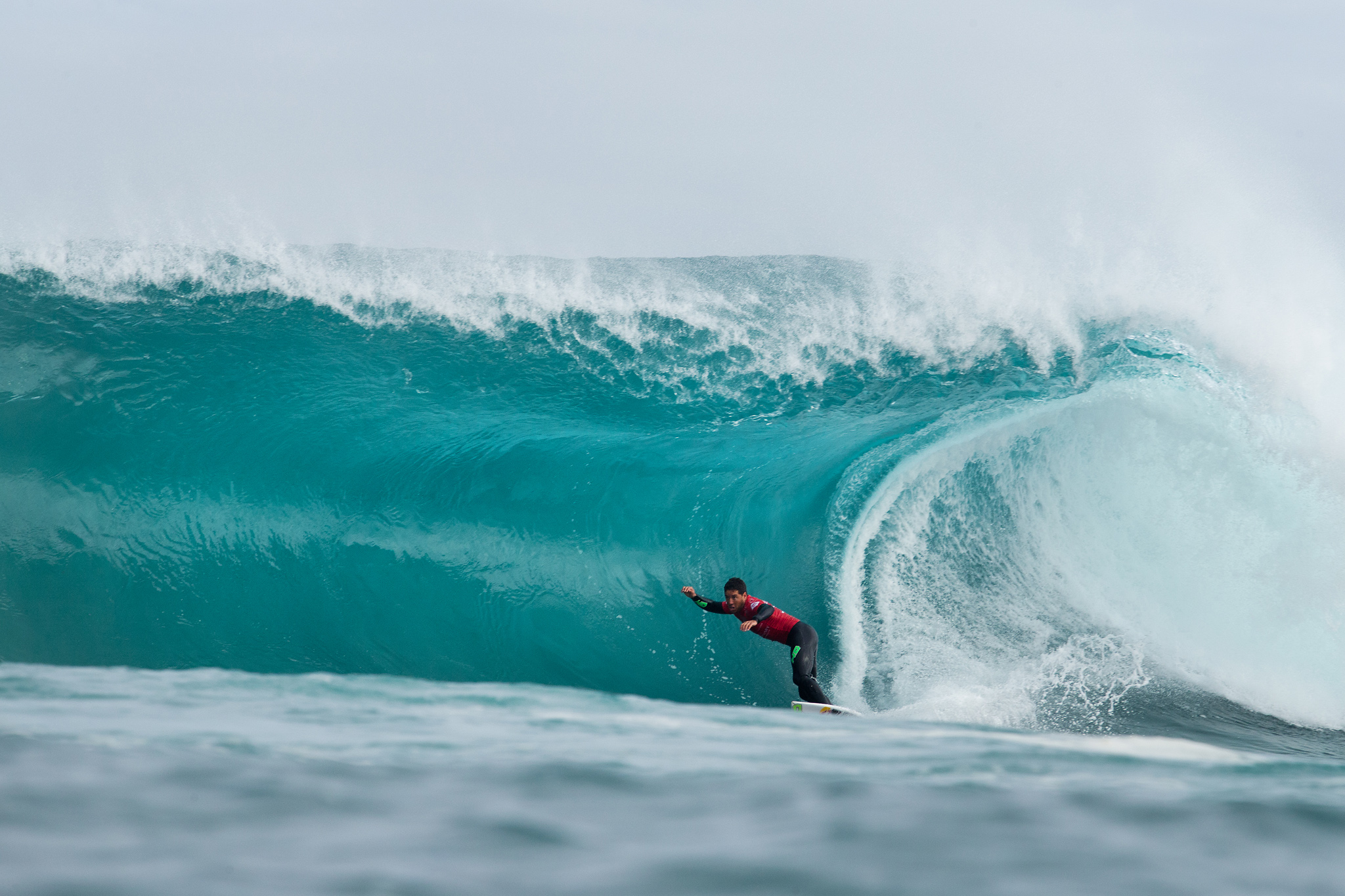 Kelly Slater (USA), the 11-time World Champion, won his heat comfortably by charging fearlessly on multiple waves. Despite relatively low scores, with just a 4.50 and a 3.70 (each out of a possible 10), Slater delivered some amazing surfing in waves of consequence, putting himself on the line. Slater defeated Kai Otton (AUS) and rookie Ricardo Christie (NZL) who will surf again in elimination Round 2.

“It’s fun and exciting out here today,” Slater said. “I didn’t come out for an early surf and when John John (Florence) came in after his heat he said it was gnarly so I was excited. I fell on those two waves and if I watch the highlights I’m going to watch the ones I fell on, those were insane.”

Three-time World Champion Mick Fanning (AUS) took to the water wearing the Jeep leader jersey following his win last week at Bells Beach and survived a tough heat against dangerous local surfer and trials winner Jay Davies (AUS) and Matt Wilkinson (AUS). Fanning opened early with an excellent 8.63 to control the heat and Davies challenged with a 7.50. Left needing a 6.50 to take the lead Davies couldn’t find the score and will face Gabriel Medina (BRA) in a highly-anticipated Round 2 match-up while Fanning moves through to Round 3. Medina lost his Round 1 heat earlier in the day to Freddy Patacchia Jr. (HAW).

“If you think it’s good you just have to take off and hold on,” Fanning said. “It was pretty wild and it’s big and ugly out there, it’s radical but fun. I took a wave that I thought was going to be a good one but it just crumbled and I hit a boil and creased the board so I changed it out.”

Josh Kerr (AUS), 2014 Drug Aware Margaret River Pro runner-up, took one of the most impressive wipeouts of the day, demonstrating just how hard this wave is to ride. Over shallow reef Kerr was launched head first off his board inside the barrel and luckily wasn’t hurt. Shaken but uninjured Kerr wasn’t able to fully recover and placed second in the heat, which see’s him relegated to surf again in elimination Round 2. Fellow Australian Adrian Buchan (AUS) won the heat thanks to an outstanding 9.53 ride, the highest single-wave score of Round 1, and the performance of the day.

“It was dangerous out there!” Buchan said. “That one let me in behind the section, ironically the deeper you are, the safer you are a lot of the time. There was a lot of lumps and bumps and I slipped sideways but somehow managed to hang on. I had one really big set that I had to bail my board on and luckily there wasn’t a wave behind because I was in a really bad position. The fans want to see us in those gnarly waves and that’s what we do.”

“The worst wipeout for me was actually the first one, rather than the one I scorpioned on,” said Kerr. “I fell and I was held down for a while so I was pretty out of breath for the rest of the heat. I tried to get nice and deep but I didn’t handle the second section, went down and landed straight on the reef.”

After a short break action continued at Margaret River’s Main Break with the remaining five heats of Round 1 where Miguel Pupo (BRA), Jeremy Flores (FRA), Joel Parkinson (AUS), Michel Bourez (PYF) and Julian Wilson (AUS) won through their match-ups to earn a pass directly to Round 3.

Flores took out local favorite Taj Burrow (AUS) and Bede Durbidge (AUS) with a solid 15.00 heat total. With three Pipe Masters out in the lineup competition was fierce but an excellent 8.50 for Flores secured his victory and a place in Round 3.

“I’m just trying to have fun and enjoy everything,” said Flores. “Conditions this year have been tough but this is pretty crazy. I knew it was going to be a tough heat out here today but I’m happy with my performance. I haven’t surfed on big boards since Hawaii so it definitely felt weird but good. We don’t get to surf big waves too often so this is great. I feel comfortable even though it’s really tough.”

Parkinson looked in-form today in his heat against Adam Melling (AUS) and Kolohe Andino (USA). The 2012 World Champion locked in the day’s highest two-wave heat total, a 15.73 out of a possible 20, to secure the win and a place in Round 3.

“I got out there and I was excited to see some size and some swell,” said Parkinson. “I felt happy and relaxed and when I feel like that I seem to do my best surfing. I hope we get to surf at The Box again, it will be amazing.”

Defending event winner Bourez also won through his Round 1 bout, claiming his first heat win of the year, narrowly defeating Nat Young (USA), who will now have to surf again in Round 2 along with rookie Italo Ferriera (BRA).

“I had such a bad start to the year and that was the first heat I’ve made,” said Bourez. “The conditions here are better for me – big, wild and bumpy – so I’m in my element. I like to surf here a lot.”

The excellent conditions look set to continue and Surfline, official forecaster for the WSL, are calling for:

Very solid SW groundswell will continue on Thursday, easing through Friday. Another exceptionally strong SSW groundswell is on track for Saturday, and could be even larger than the surf for Wed/Thur. Sunday will see dropping surf, with a further drop in surf on Monday. Morning wind conditions look favorable for the next few days, with some periods of side or onshore flow in the afternoons. Going further out, another strong SW swell looks possible around Wednesday the 22nd.

The Drug Aware Margaret River Pro will be held from April 15 – 26, 2015. Watch the unparalleled adventure, competitive drama and athleticism of professional surfing live at WorldSurfLeague.com.

The world’s best surfing will also be broadcast LIVE on Fox Sports in Australia, MCS Extreme in France, EDGE Sports in China, South Korea Malaysia and other territories and the WSL’s new partner in Brazil, Globo TV.