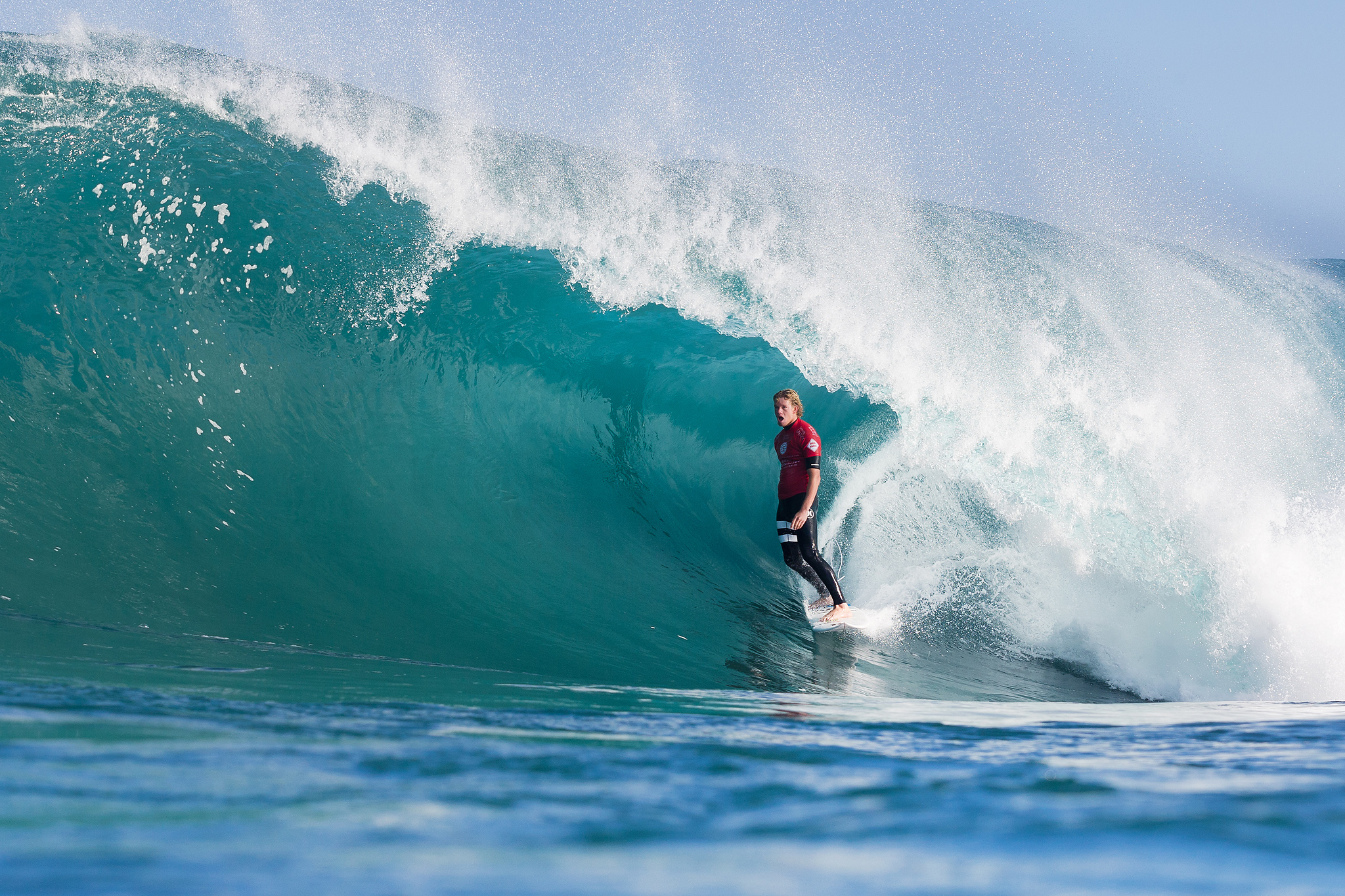 MARGARET RIVER, Western Australia (Friday, April 17, 2015) – The Drug Aware Margaret River Pro, the third stop on the Samsung Galaxy World Surf League (WSL) Championship Tour (CT) ran through the opening 8 heats of Men’s Round 3 at The Box before moving back to Main Break to complete the Round. The day saw big upsets as ratings leader Mick Fanning (AUS) was eliminated at the hands of wildcard Jay Davies (AUS) and Joel Parkinson (AUS) was defeated by Sebastian Zietz (HAW). The women’s competition also got underway with Round 1 in large surf at Margaret River’s Main Break, where the top seeds were dominant with Carissa Moore (HAW), Stephanie Gilmore (AUS) and Tyler Wright (AUS) all moving directly through to Round 3. 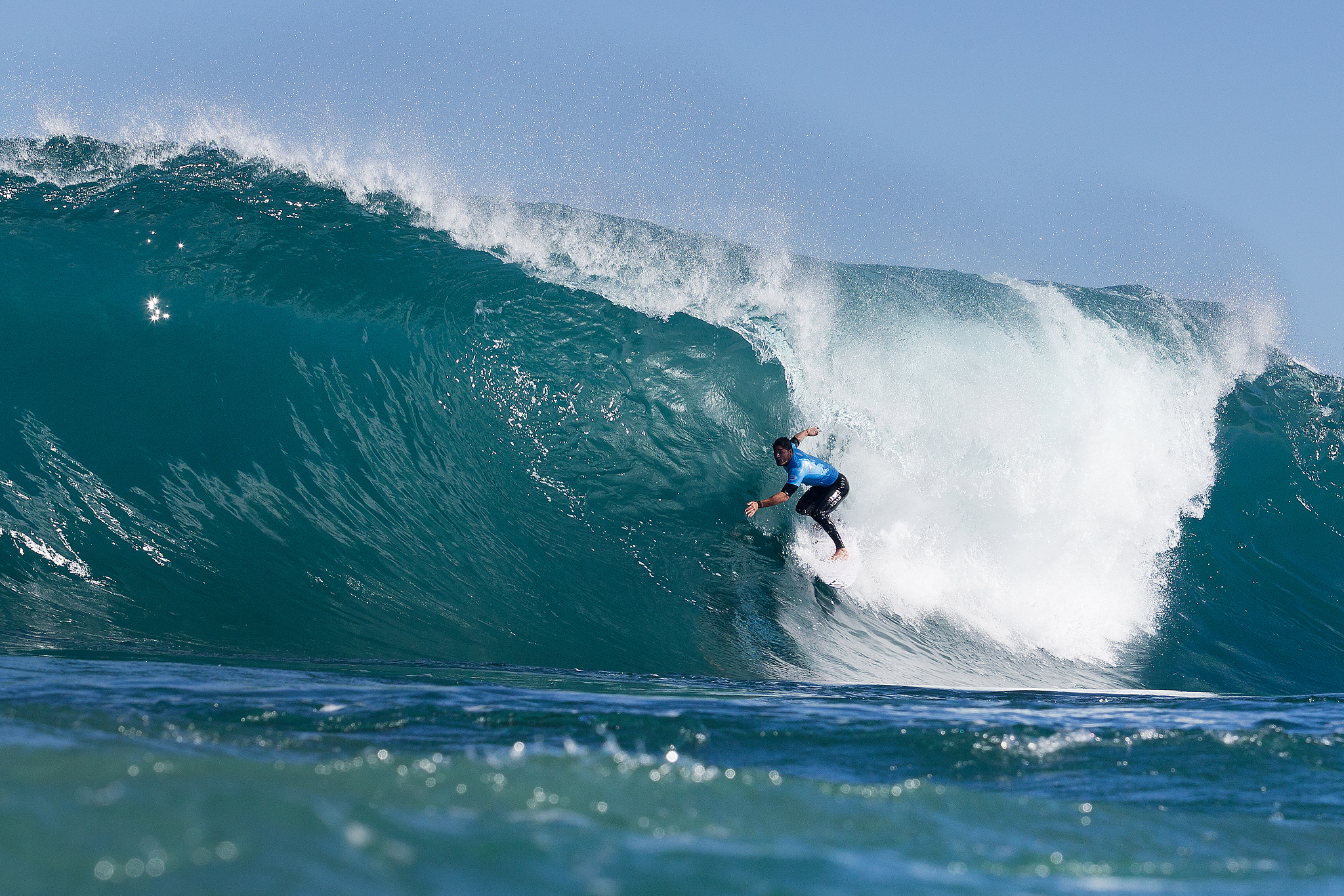 After taking down reigning WSL Champion Gabriel Medina (BRA) yesterday, dangerous local wildcard Jay Davies (AUS) caused the upset of the day and eliminated ratings leader Mick Fanning (AUS) in Round 3. Davies posted an excellent 9.50, backing it up with a 7.33 for a 16.83 two-wave heat total, to take the win and send the three-time World Champion home with a 13th-place finish, his worst result of the year.

“That was just so fun, every bit of it,” said Davies. “On that wave I just really had to forget about all the other heats I’ve surfed out here where I’ve pulled back and put my head down. It was the steepest take off and I just wanted to give it everything I had. I thought I was going to come off but luckily I didn’t.

“It’s exciting to compete here in my home town and in front of all my friends and family, which makes it so much sweeter,” continued Davies. “Surfing against Mick (Fanning) just then was amazing, he’s one of my friends and he’s such a champion.”

“I had two waves there that could have been bigger scores but it was sick,” Fanning said. “Me and Jay (Davies) were actually laughing out there. To get to surf The Box with no one else out and trading off waves with one of your mates and getting barreled is all time. Over here the two wildcards that I’ve lost to are world-class surfers — Jay Davies and Yadin Nicol. The Box is sort of a lucky dip and it causes both upsets and great performances. It’s a difficult wave so you just go out there, try and get barreled and it’s fun.”

Heat 4 saw another upset as Sebastian Zietz (HAW) took down Joel Parkinson (AUS). The Hawaiian looked in great from, relishing in the large conditions, and two 7-point rides secured him the win. Today is another disappointing result for the Australian, adding a second 13th-place finish to his results this year.

“He (Joel Parkinson) is really gnarly out there,” said Zietz. “We’ve had a few freesurfs out here and he’s so good. I don’t think either of us really got the best waves that were out there. I was stoked just to make it out of Round 3, which is a really killer for me. We were sitting really deep and both lost priority. It’s so beautiful here and we’ve had such great waves.”

“At the start of the heat we both missed some pretty good waves,” Parkinson said. “I expected more opportunities to come through and it got quiet out there for a while. It felt like 30 minutes goes so quickly out there in those waves, it’s not like 30 minutes anywhere else.”

11-time World Champion Kelly Slater (USA) delivered a Perfect 10 at Main Break today, managing to find a deep barrel followed by a huge carve. Paired with his excellent 9.50 from earlier he secured a 19.50 two-wave heat total, the best of the competition so far, to defeat Glenn Hall (IRL).

“I’ve been coming here since 1993 and that’s probably the best surf I’ve had in a heat,” said Slater. “There were a lot of good waves out there in the heat. I had three of four chances on good waves. I rode a little bigger board and tried to draw lines out and that’s the biggest adjustment I’ve made, my board.”

Despite the wave of the heat from Kai Otton (AUS) he couldn’t find a score to back up his near-perfect 9.57 in his Round 3 heat against defending event winner Michel Bourez (PYF). The Tahitian found an excellent 8.40 and 6.83 to secure the win and a place in Round 4.

“It’s super terrifying out at The Box!” Bourez said. “You have to pick the right waves, you don’t know what the wave is going to do. You take off, hold on and hope that you make the barrel and if you do it’s the best feeling in the world.” 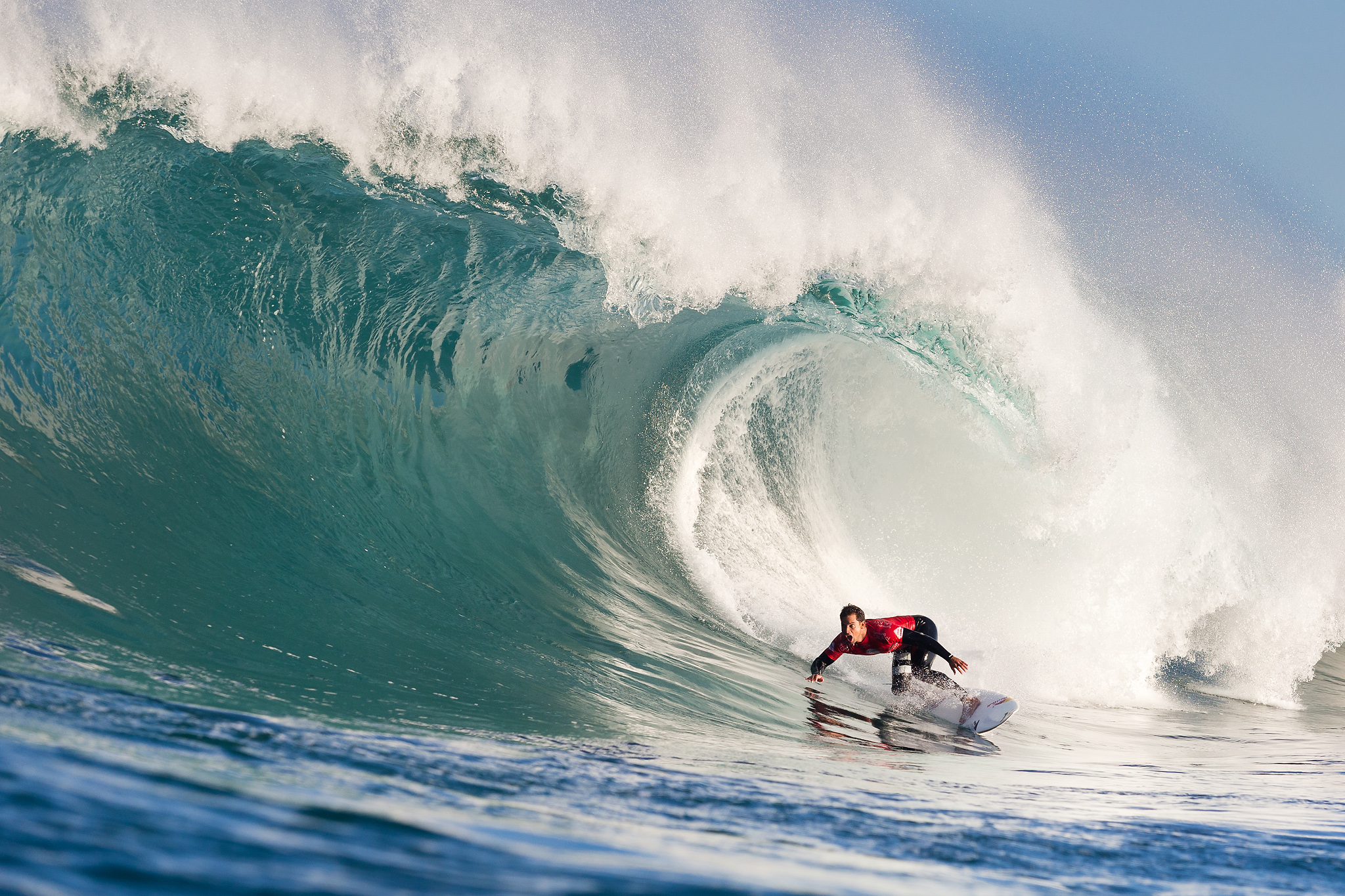 John John Florence (HAW), winner of the 2012 Margaret River Qualifying Series event, put on another incredible display of surfing to take the win over Adam Melling (AUS). Florence showed his control and confidence, looking at ease in the waves of consequence while Melling suffered a terrifying wipeout.

“The Box is one of the most challenging barrels out there,” Florence said. “It’s one of the scariest waves I’ve surfed. Some of the waves let you in early if you’re lucky, but then you still have to deal with the steps. There’s a lot of water moving out there so you need to pick the ones when there’s some water on the reef.”

Jordy Smith (ZAF) has withdrawn from the competition after injuring his foot during a freesurf yesterday. The incident will see Jeremy Flores (FRA) advance directly to the Round 4.

Sally Fitzgibbons (AUS), Tatiana Weston-Webb (HAW) and Alessa Quizon (HAW) went head-to-head in Round 1 of the women’s contest. The Australian posted a 9-point ride on her second wave for a convincing lead while the Hawaiians trailed. Fitzgibbons looked comfortable in the big waves and went on to back up her excellent score with a solid 7.60 to leave Quizon in a combination and Weston-Webb needing a 9.10. Fitzgibbons’ strong performance moves her directly through to Round 3.

“Preparation is key, especially at a wave like Margaret River,” said Fitzgibbons. “There’s a lot going on and a lot to think about but I really enjoyed the challenge out there today. We got out there nice and early just to get a feel of the lineup. It was a pretty intense experience to out there just metres away while the first heat copped a few sets on the head. It was good to see them get back up and get out there for another one.” 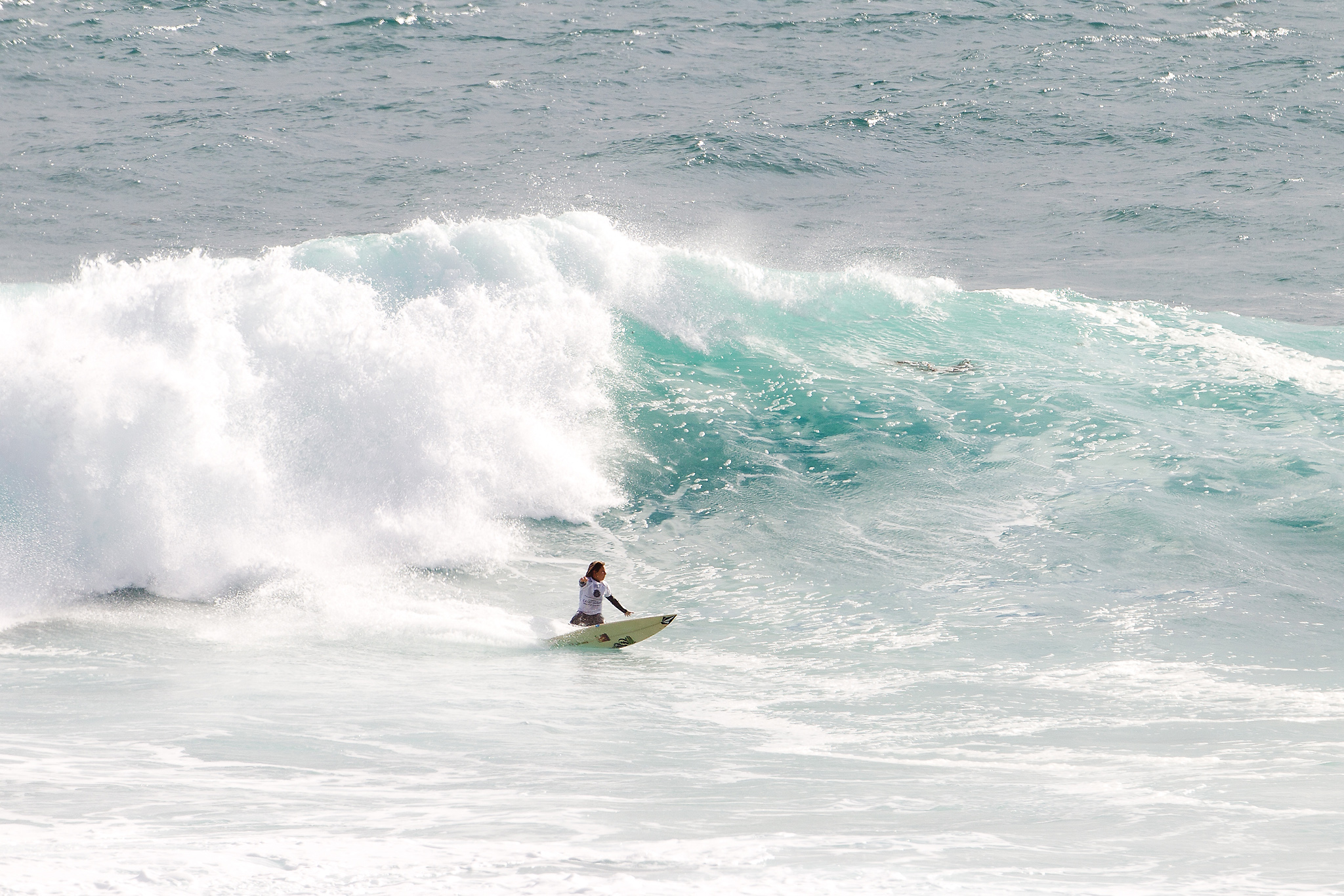 “I just wanted to finish my wave and I wasn’t really thinking too much about the rocks,” said Moore. “I got a little close and the jet ski guy said ‘don’t hit that last section next time’ but I’m glad I’m okay. I’m working with local surfer Andrew Sheridan here and it definitely gives me confidence having him out in the channel.” 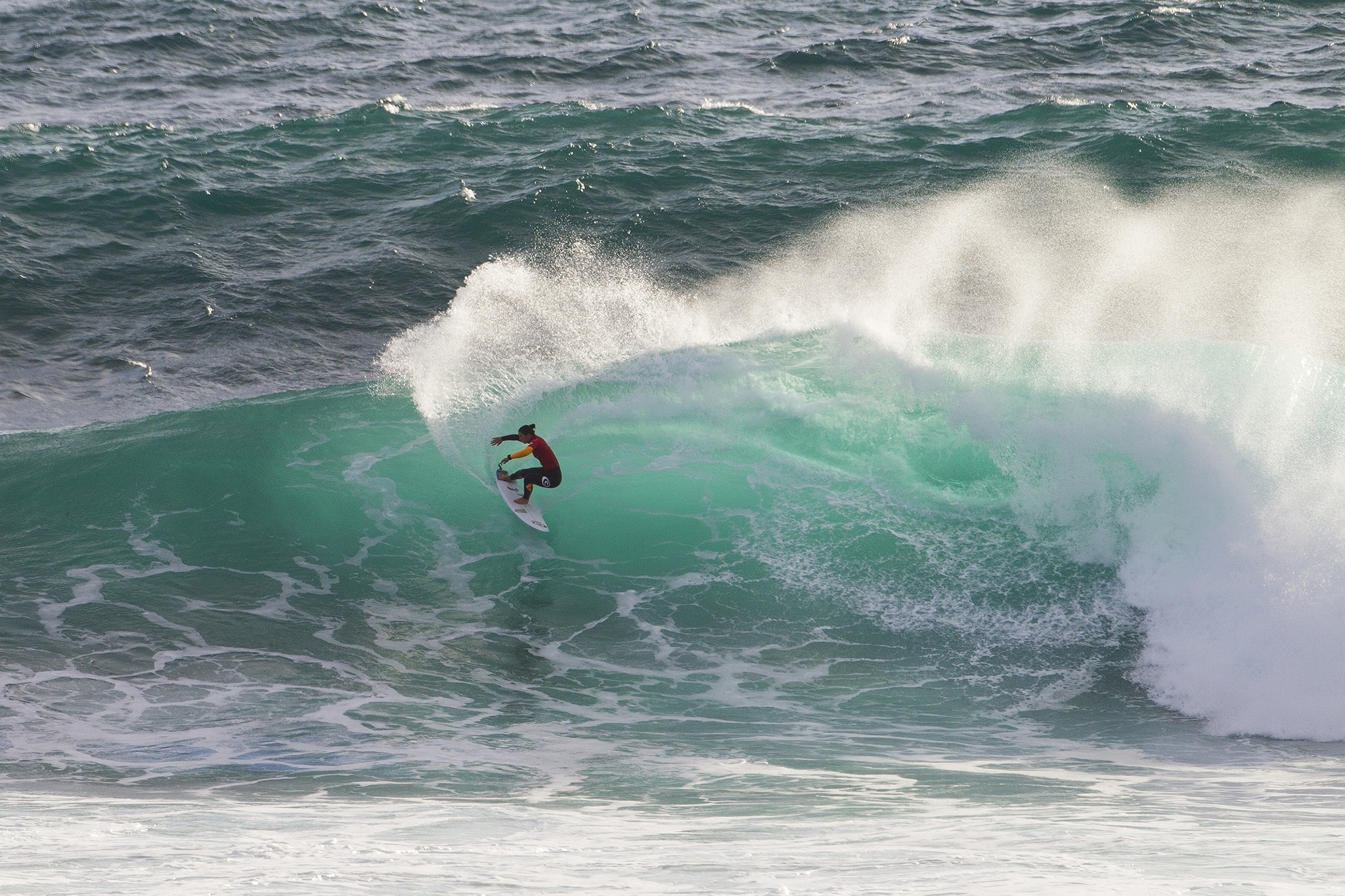 Tyler Wright (AUS) looked confident and at ease it the big surf, posting the second 9-point ride of Round 1 and the highest heat total of the women’s competition so far. Opponents Silvana Lima (BRA) and Laura Enever (AUS) were each left searching for two scores and will surf again in elimination Round 2 while Wright moves directly to Round 3.

“This is probably one of the first times that I’ve had any kind of strategy,” said Wright. “It was to look out for the rights but not to say no to a left either. It worked out for me. I wasn’t exactly comfortable out there but I was aware of how the ocean was moving.”

Reigning six-time WSL Champion Stephanie Gilmore (AUS) took to the lineup against Bianca Buitendag (ZAF) and Sage Erickson (USA) and Gilmore stole the win, despite posting just one score in the 30-minute heat.

“The heat before ours had so many bomb sets so I was feeling a little bit freaked out and under gunned,” Gilmore said. “I watched Carissa (Moore) sitting way over in the channel and picking off good waves so I thought I’d do the same thing but I think I was a little too deep. I only got one wave and I was out of position. That was actually my first surf at Margarets since I’ve been here and it’s a pretty challenging wave out there.”

The Drug Aware Margaret River Pro will be held from April 15 – 26, 2015. Watch the unparalleled adventure, competitive drama and athleticism of professional surfing live at WorldSurfLeague.com.

The world’s best surfing will also be broadcast LIVE on Fox Sports in Australia, MCS Extreme in France, EDGE Sports in China, South Korea Malaysia and other territories and the WSL’s new partner in Brazil, Globo TV. 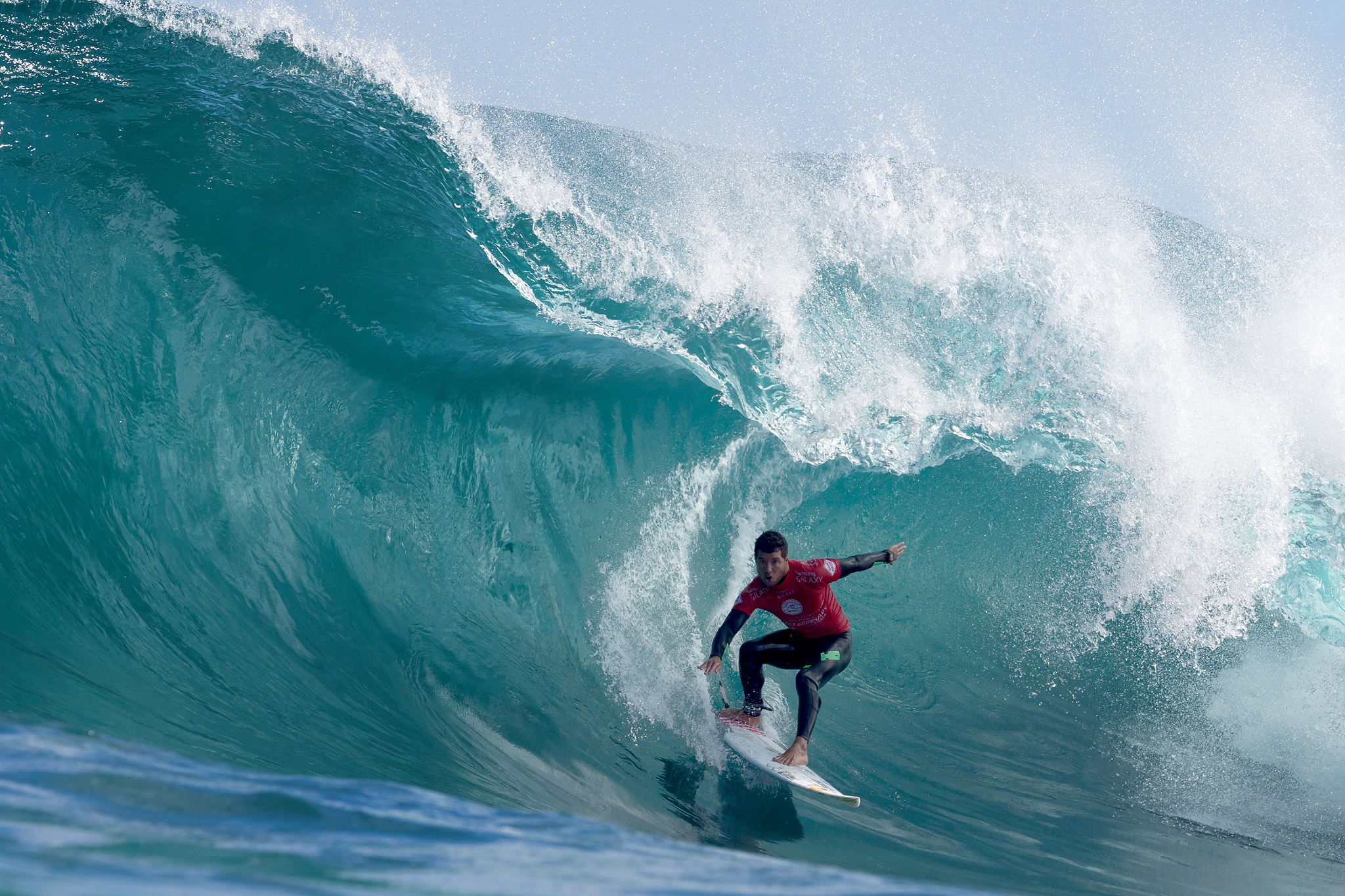