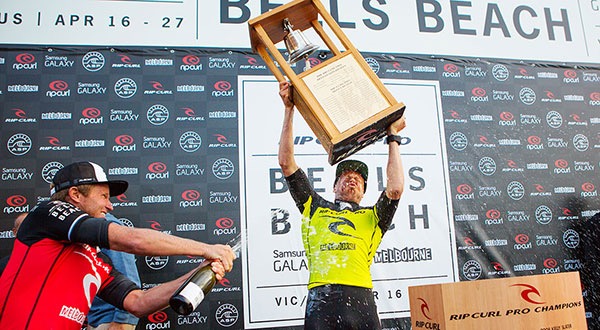 The world’s best male and female surfers will battle the elements and adapt their approaches in hunting for waves, scores and the honour of ringing the coveted Bell.

Three-time World Champion Mick Fanning (AUS) secured his third Rip Curl Pro Bells Beach win in 2014 (he previously won as a wildcard in 2001 and again in 2012).

After a Quarterfinal finish at Snapper Rocks, Fanning is eager to defend his title at Bells. Fanning will face Freddy Patacchia Jr. (HAW) and wildcard Mason Ho (HAW) in Round 1.

“For me this is a home away from home,” Fanning said. “As a kid this is the first event, other than the Gold Coast, that I ever came to and watched the greats like Occy (Mark Occhilupo), Matt Hoy and Shane Dorian win the event. Those were my first years coming here and I fell in love with the place straight away.”

“So many things have gone down at this event and there’s been so many crazy battles. It’s one of those places that I really enjoy surfing the wave.”

Pauline Ado (FRA) will join the WSL Top 17 and complete the lineup for the Rip Curl Women’s Pro Bells Beach.

Former Championship Tour surfer Ado won the event trials to earn her place amongst the world’s best and will face Moore and Dimity Stoyle (AUS) in Round 1 Heat 3.

“I am stoked to get into the event,” Ado said. “Thank you to Rip Curl for allowing me the chance to surf in the trials and make it into the main event.”

“It’s going to be so good to compete in the Rip Curl Pro with my sister,” Van Dijk said. “I have been watching her compete over the past few years and it is what I have been aspiring to do. It’s nice to get the chance to surf in the main event.”

The Rip Curl Pro Bells Beach is the longest-running professional surfing contest in the world and one of the most coveted titles on Tour. This year celebrates the 54th running of the event.

The event window runs from Wednesday April 1 to Sunday April 12, 2015 and if you’re not at Bells Beach you can catch all the action live at WorldSurfLeague.com.