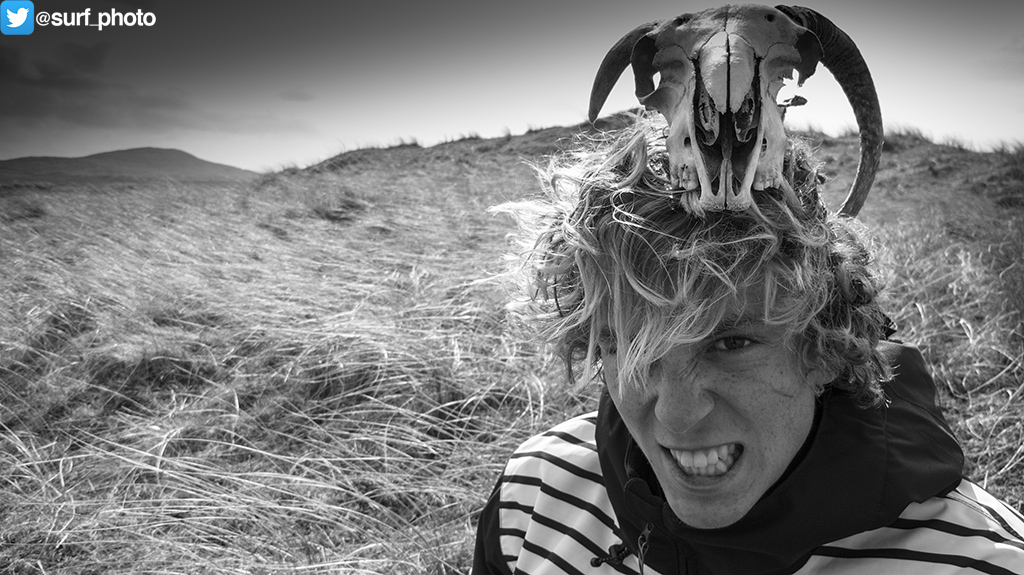 Seemed like a simple task— to rendezvous at a Glasgow retail park to receive instructions, Top Gear style, as to what our mission was. Except it’s not so simple when there are three surfers, two photographers, three vehicles and bodies strewn across the land from Kernow to the Vale of Glamorgan via the Big Smoke.

Somehow it came together (a good few hours behind schedule) and as we settled in to a few bevvies and slap up pub feed in the Premier Inn Rent-A-Tavern Sam Lam’ hit us with the plan.

Being modern times he simply fired up Google Maps on his battered iPhone and pointed to an island, zoomed in to the satellite image and took us on a birds eye tour, “See that, there, and there, hmm, interesting huh?” Four heads nodded in agreement at an array of river mouths, sandbars and likely looking reef set ups. He continued, “We’ve got four metres of swell, good winds and odds on not another surfer for a few hundred miles.”

We raised our glasses to that.

Booze, mates, food, open fire (the early spring surge hadn’t quite made it this far north yet) and a promising adventure brewing puts a grin on yer face.

The grin sagged a tad when Stu Campbell pointed at the muted TV set glowing in the corner of the bar, “That big green blob, the massive, ugly, violent rain storm that they are issuing ‘wave your hands in the air’ weather warnings for tomorrow is pretty much covering our whole six hour drive through the Highlands tomorrow then?”

Now I like a bit of extreme weather. Heavy rain and strong winds make you feel alive. When Mama Nature gets her knickers in a twist it’s fun to be twanging the elastic. Unless you’ve just driven the length of the country, shared a room with two Olympic standard snorers who made sleep impossible and are then expected to do another all day drive on progressively deteriorating mountain roads.

We breakfasted dejectedly staring out into the first salvos of the approaching maelstrom.

Down south the tweets and FB updates were flying thick and fast regarding the rather spiffing weather. Pretty much everyone we knew was busting out the flip-flops, bikinis, suncream and 3mm wetties as the burning ball of fire in the sky I like to call ‘The Sun’ had come back off it’s winter hol’s.

The irony was not lost on us.

The weather was being racist against Scottish people.

The next day was hell. 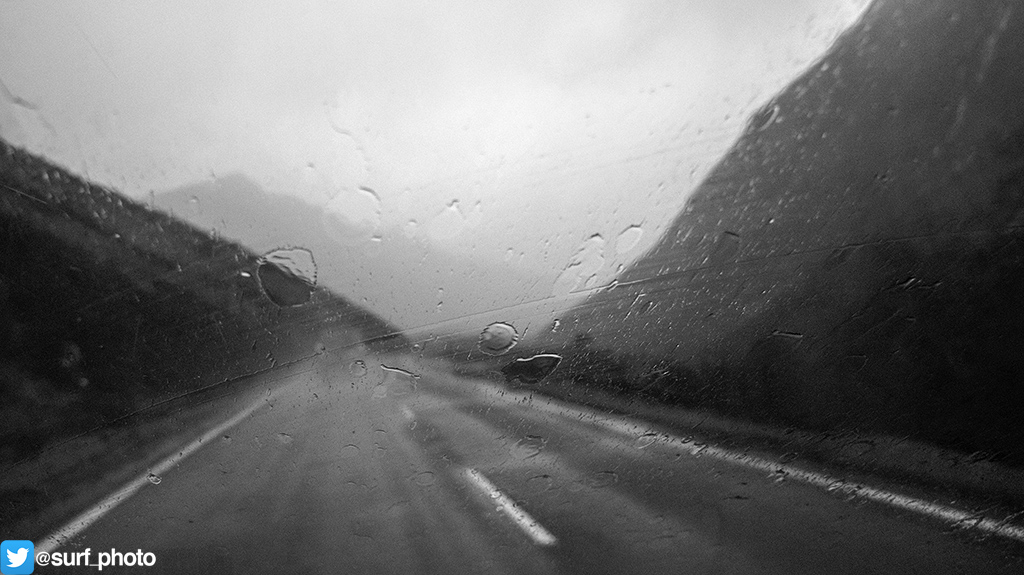 Every dry stream bed was a raging torrent, every waterfall a thundering cataract. It was impressive but I yearned for a Land Cruiser as opposed to a cheap and cheerful Astra that was burying itself to the axles in each deepening flood. I was just waiting for it to flood the electrics and the call to the AA to not go well, as there’s no reception in the wilds. I was going to be left to the elements, like a Greek bastard of myth, to die at the hands of exposure.

As we neared the coast a cheerful sign blinked that the ferry we were aiming for was cancelled and wouldn’t be running until the day after at the earliest cos it had blown away— buggery arse. That added three hours on to the drive to make the next ferry up the coast.

Suffice to say it wasn’t a barrel of laughs. But we got to a ferry which got us where we wanted to go and as the weather-shocked crew regrouped on the ferry deck the sunset popped out from under the clouds and the storm faded to the east.

Our destination island was odd, Wicker Man odd, the only word to describe it is ‘sparse’. The main town wouldn’t even be considered a hamlet on the mainland and we were staying way out in the sticks. An hour on single track but stunningly empty roads lead us to our gaff, the landlady greeted us as we pulled in and her chirpy chat sounded like Norwegian. Come to think of it she looked like a Viking, her horned hat must have been down the dry cleaners. The Norse influence in these parts was obviously deep rooted.

So there we were. In a comfy little house with a rather overboard swag of mainland ASDA groceries to see us through the week (for our surfer based Come Dine With Me homage). All was good. Until we hit the hay. I was sharing with staff photog Will, turns out Stu and Sam are proper shit at snoring compared to Will … and he sleeps deep. A meteor could strike the earth just outside the front door unleashing firey armageddon and he would sleep through it.

I, as a light sleeper, was doomed, ear plugs were no use as they’d get shaken out by Bailey’s somnambulistic sonic assault. Luckily I left my car on the mainland so could sit, sleep-deprived-zombie-trance like, in the back of Stu’s van as we explored the island in the coming days.

And boy did we explore…

Every nook and cranny that looked likely got sniffed, scoped and perused. Which is all well and good but the surf was bum. The four metre swell was nowhere to be seen. Odd as we had the whole Atlantic on our doorstep. So we drove, we walked, we explored.

We said things like, “With swell that could be good.” Which is a dumb thing to say.

As it was the first day we weren’t too stressed about scoring, the weather was sunny but freezing, and the swell had to be turning up any minute. So we got our bearings and figured out the lay of the land.

We woke up the next morning, for another supposedly sunny day, to find someone had painted all the houses windows with grey paint. Or it might’ve just been insanely foggy. Which it was. So foggy we couldn’t see the waves from the waters edge. Which is spooky when you’re on the edge of Europe and the currents are fierce. Didn’t stop us looking though.

We popped back down one of the few lanes that went to the coast passed an abandoned farm house we scoped the day before, there was a potential slab that had got Micah and Sam quite jazzed. Or we tried too. As we pulled off the single track main road onto the dirt track a 4×4’s lights came out of the gloom, drove to the bridge between us and parked squarely on it blocking our path. Sam and Micah wandered over to chat. The simple message was, “Farmhouse not abandoned, get the firk off my land, now do one.” All delivered from a scarred face farmer straight out of a low-budget horror film. If we’d been up on Scottish access laws we could have parked on the road and walked in exercising our ‘right to roam’ but we didn’t know that, so we created wildly slanderous scenarios as to what happened in the spooky farmhouse that even DIY SOS couldn’t fix and fantasised about the slab we’d been denied.

Heavy fog in unknown waters is a bit of a sod. We lost days to it’s damp, soggy blanket. We got the odd surf in here and there but nothing to write home about. Not that we could as we had no phone reception and the interweb hadn’t reached these parts as yet. Which to be honest, was quite refreshing, not being at the constant beck and call of emails, texts and the deep claws of social media was as fresh a breath of air as the clean goodness blowing in from the North Atlantic.

Our time on Wicker Island was coming to an end. We’d not scored. Will was tamping as his track record with these kind of trips is pretty stellar. A couple of two foot beachy sessions were not what he’d signed up for. We’d explored as much as we could but it just wasn’t happening. 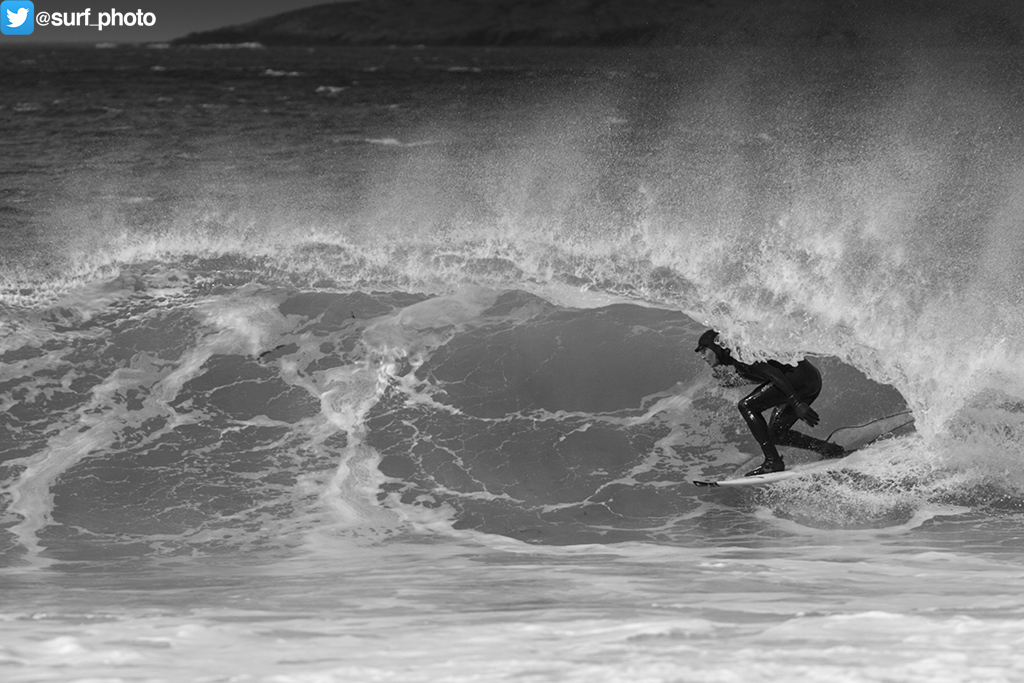 So we gambled. Another little island, another ferry, a quick hit on our last day to try and save the trip. Which kinda worked. The fog remained clung like an overly clingy girlfriend to Wicker Island and as we cleared the sound to the next island the sun returned to our vitamin D deprived lives (little did we know it was ACTUALLY summer now down south). We rounded the bend to the first exposed beach, it was clean, there was swell, we could be on. We found a beach that had an epic little bar at one end and got stuck in, on cue the wind kicked up from zephyrs of offshore to gale force offshore but it was still barrelling.

Fun was had. Blood contracts made to visit again such was the potential. Chatting to local old fellas revealed they’d hardly ever seen surfers there. In fact in the whole week we’d met one other surfer. A local on Wicker Island who’d been out the water for a few years with a bad back. Think about that. Being the only surfer on your island, an island with more waves than you could surf in a lifetime. A bit spooky really. No wonder he was keen to surf with us. 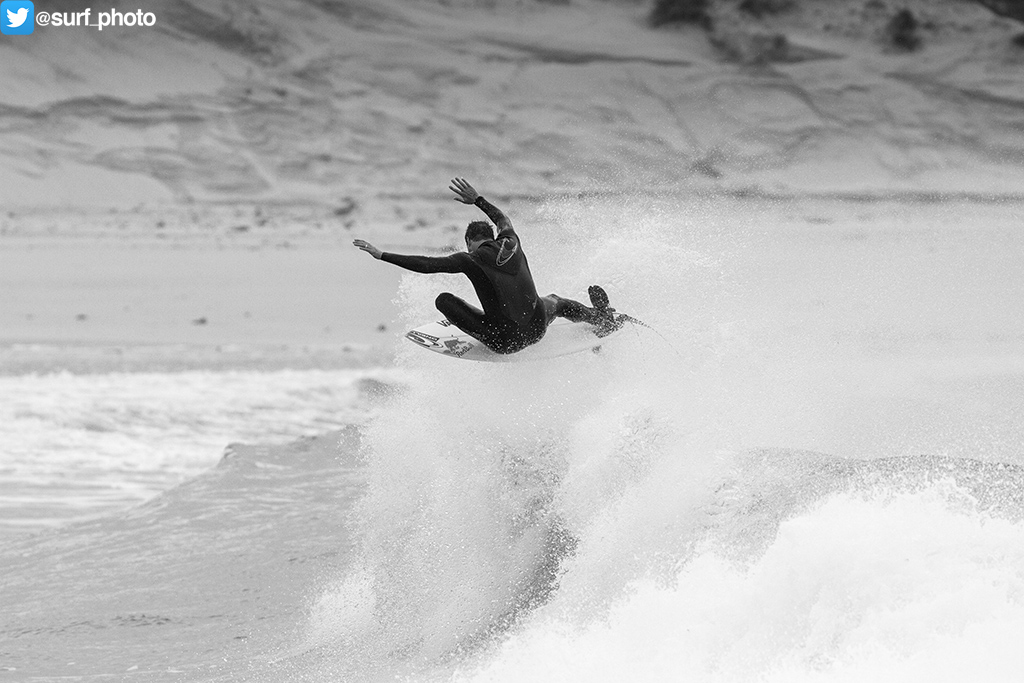