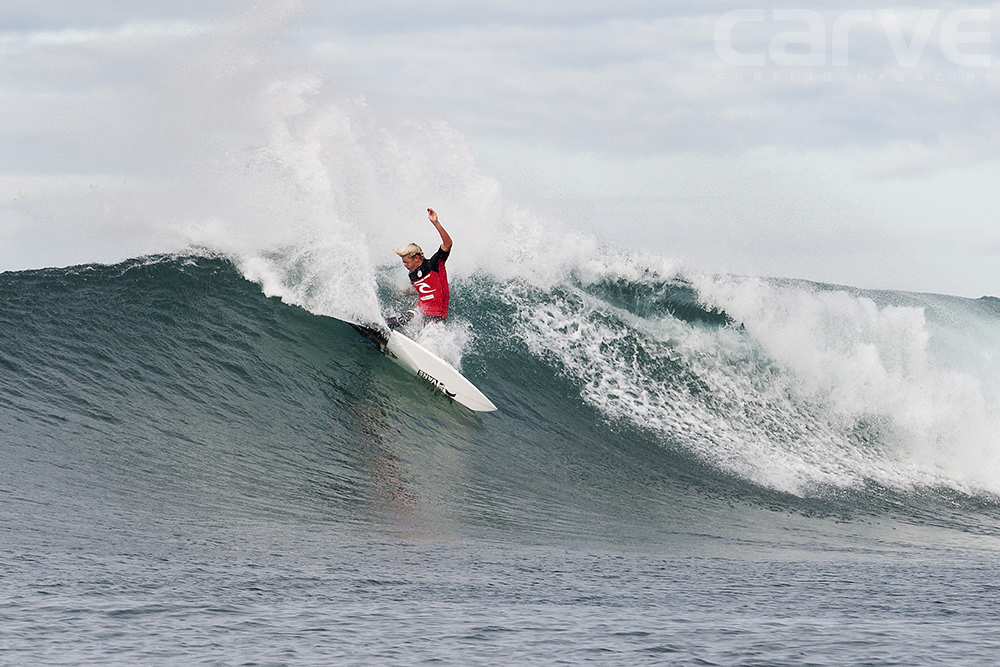 BELLS BEACH, VIC/Australia (Sunday, April 20, 2014): Stop No. 3 on the 2014 Samsung Galaxy ASP World Championship Tour (WCT), the Rip Curl Pro Bells Beach, was treated to classic conditions at the world renowned right-hand reef break today. The event ran through Round 2 of the men’s and Round 2 and 3 of the women’s in clean and pristine Bells Beach conditions. 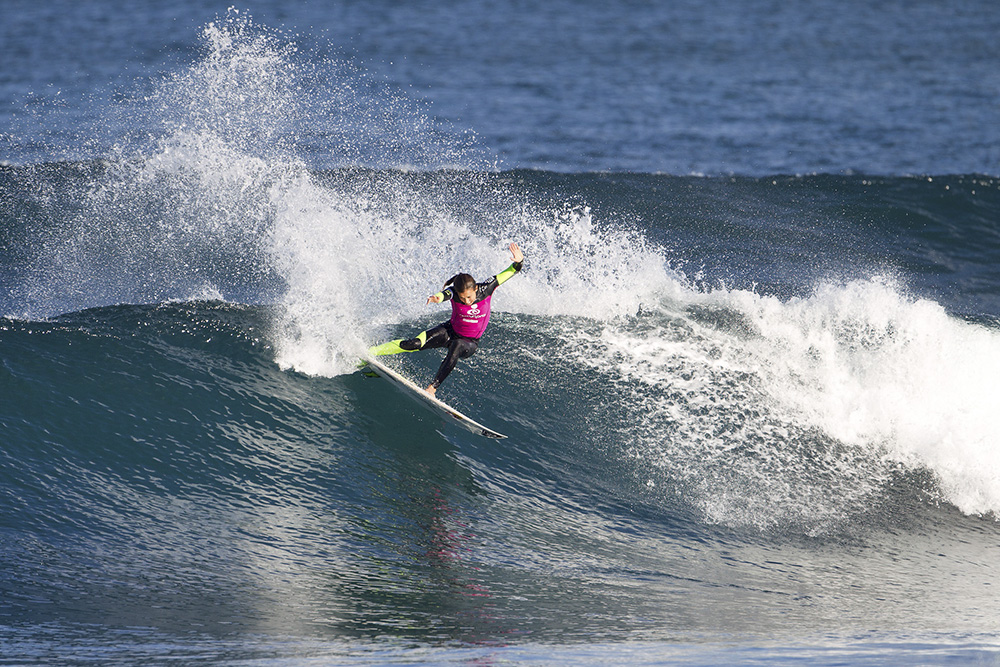 In an explosive Heat Sally Fitzgibbons (AUS) exerted her dominance at Bells Beach. Leading in spectacular fashion, Fitzgibbons posted the highest two-wave total of the event so far with a near perfect 18.37 for a series of ferocious carves and dazzling fin-wafts. Courtney Conlogue (USA) and Nikki Van Dijk (AUS) also impressed with excellent scores of their own for spectacular forehand displays, but were unable to upturn Fitzgibbons who will advance through to the Quarterfinals. Conlogue and Van Dijk will surf again again in Round 4.

“It was a really exciting Heat both to watch and compete in. When I heard I was getting those big scores it was such a great confidence booster and I’m really happy to move into the Quarterfinals,” said Sally Fitzgibbons. “It was a tough Heat having two competitors like Nikki (Van Dijk) and Courtney (Conologue), they both have big power games and I knew I had to have a point of difference”.

In the second all-Hawaiian Heat of the day, it was Coco Ho who took the free pass through to the Quarterfinals, relegating opponents Carissa Moore and Malia Manuel to Round 4. Ho commanded attention early, netting a 8.50 within minutes of jumping in the water. Reigning two-time ASP Women’s World Champion and defending event winner Carissa Moore struggled to produce the high-scoring waves she needed to take back the lead. Manuel also stepped up with consecutive mid-range scores but Ho added a 7.37 before emerging from the water with her hard-earned victory.

“Beating the World Champion just means that you have potential and that you know how to surf,” said Coco Ho. “Rincon really turned on today, we were so lucky. I think on my first wave I was a little tentative but I was able to get a few more, which helped me loosen up. It was a really fun Heat.”

In her second Heat of the afternoon 2013 Rip Curl Pro Bells Beach runner-up Tyler Wright (AUS) faced off against fellow Australian Laura Enever and America’s Lakey Peterson. The in-form Wright led from start to finish despite Peterson’s impressive 7.07 ride. Enever fought hard to keep up, but was unable to break the 5-point score barrier. Wright, however, had no trouble in grooming the walls of Ricon with an impressive display of turns and cuts that saw her tally a two-wave Heat total of 16.93 and charge straight into the Quarterfinals.

“I’ve been coming down to Bells since I was eight years old, driving down here in a van with my whole family. I really enjoy it, it’s an interesting wave that I find very challenging,” said Tyler Wright. “The crowd’s great and it’s really cool to have that kind of support on the beach.” 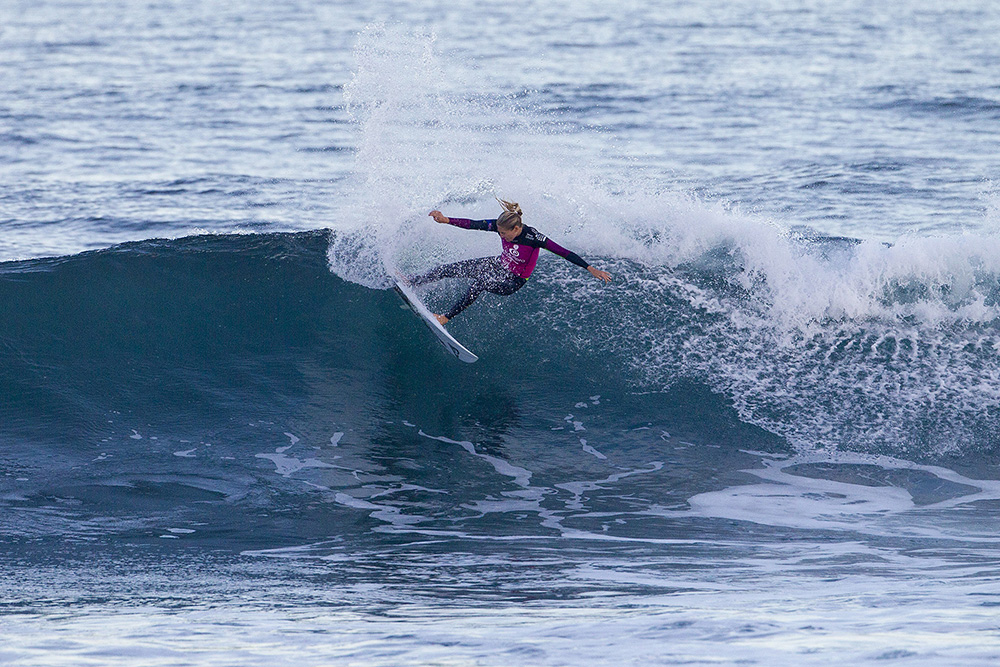 Stephanie Gilmore (AUS), five-time ASP Women’s World Champion and three-time Rip Curl Pro Bells Beach winner won through to the Quarterfinals in an explosive Round 3 match-up against Dimity Stoyle (AUS) and Bianca Buitendag (ZAF). Gilmore started slow, letting her rivals post some solid scores, but she finished with a bang as she dropped a near-perfect 9.17 for three critical turns, sending Stoyle and Buitendag into Round 4.

“I could tell that the judges have been holding back on the bigger scores this year,” said Stephanie Gilmore . “I always try to stay on the attack, the level of surfing in this Round has been really high so I knew I had to go hard to get a big score. I always try to imagine myself in the Finals and I’ve been thinking about ringing the Bell, but you can’t get too far ahead of yourself.”

Current ASP World No. 4 Michel Bourez (PYF) went head to head with injury replacement surfer Glen Hall (IRL) earlier in the day. Hall, who is competing in his first event since his back-breaking injury in Fiji last year, was first to put his hand up for a score linking a series of smooth backhands for a 6.67, but Bourez was quick to respond. With only five waves caught between them during the 30-minute melee Hall came out on top, securing another 6.53 set wave to take him through to Round 3 and putting an end to Bourez’s winning momentum.

“It’s been a long road to get here but surfing in the first heat of the day with great waves and ACDC’s Hell’s Bells playing in the background has made it all worth it,” said Glenn Hall. “A month ago it just didn’t feel right picturing myself surfing waves like the Box and Margaret River but I was hoping that I could compete here at Bells Beach. I still have a long way to go, but hopefully I’ll just keep improving.”

Adriana Souza (BRA) showed Brett Simpson (USA) why he is the defending event winner in Round 2 Heat 4. De Souza wasted little time in capitalizing on the conditions, surging into the Bells walls with a 7.67 and backing it up with a dazzling, running, right-hander and the highest score of the men’s competition so far, a 9.17. A missed opportunity by Simpson late in the Heat saw De Souza secure the win and move one step closer to defending his Bells Title.

“My surfing definitely fits this wave,” said Adriano de Souza. “My confidence is high and I really want to try and do well because last year I won this event. I know it is the past but I just want to try and bring some of last year’s form back here.”

Hawaii’s John John Florence snatched a win over powerful Portuguese surfer Tiago Pires in Round 2 Heat 6. Pires was absent from the Margaret River Drug Aware Pro due to a knee injury, but today showed no signs of discomfort, breezing through a 7.33 wave to take an early lead. Despite putting up a solid score of his own, Florence struggled to find a back-up score to help overturn Pires’ lead. It wasn’t until the final moments that the Hawaiian was able to unload a series of high-velocity maneuvers and notch a 7.53 that saw him steal the win and advance through to Round 3.

“I was feeling pretty good and really psyched to be out there on my first wave,” said John John Florence. “I think I got a little bit too excited and I fell. I got a couple of good waves though. The one that really threw me off was when I did that turn and tried to get barreled and I fell, I was so mad at that one. It’s firing out there, it’s like what you see in the photos of Bells Beach.”

Close friends and Central Coast, NSW surfers Matt Wilkinson (AUS) and Adrian Buchan (AUS) squared off in Round 2 Heat 9. The lead swung back and forth between the pair but it was Wilkinson who provided the fireworks, dishing up a crucial backhand attack that would earn him an 8.13. Buchan clocked some impressive scores of his own, but Wilkinson answered with another set wave, combining a big carve, tail-drift turn, and additional snap to take his first Heat win of 2014.

“The pressure’s not off at all, I’ve got to make a few more Heats until I start feeling comfortable,” said Matt Wilkinson. “I surfed fairly well but I could have put on an extra 15 or 20 percent more energy on those two big waves I caught for higher scores. Hopefully I make it to the end stages of the competition when I will have to put in that extra.” 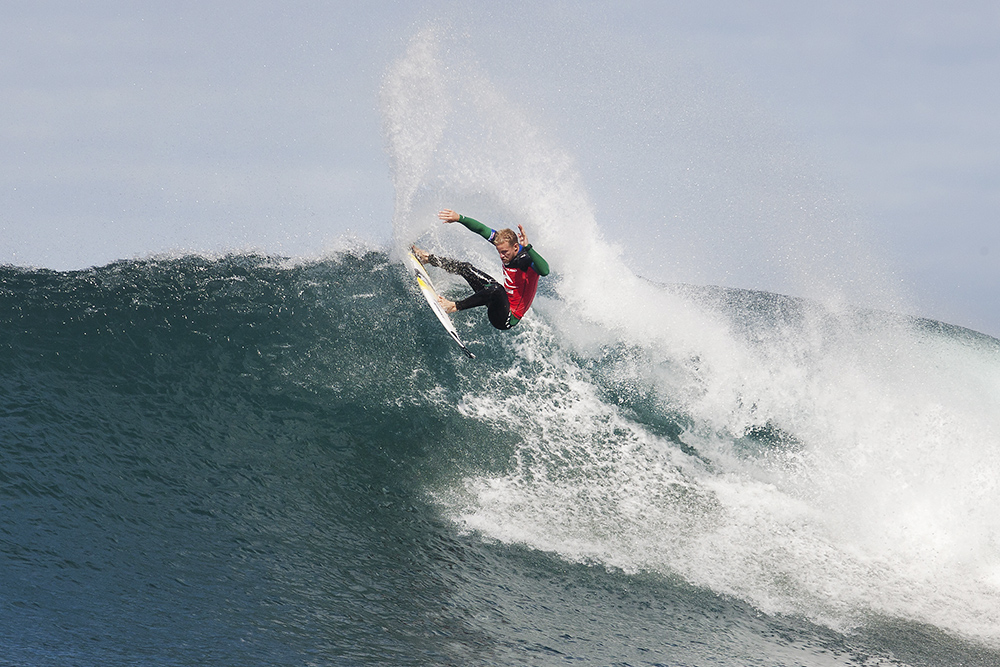 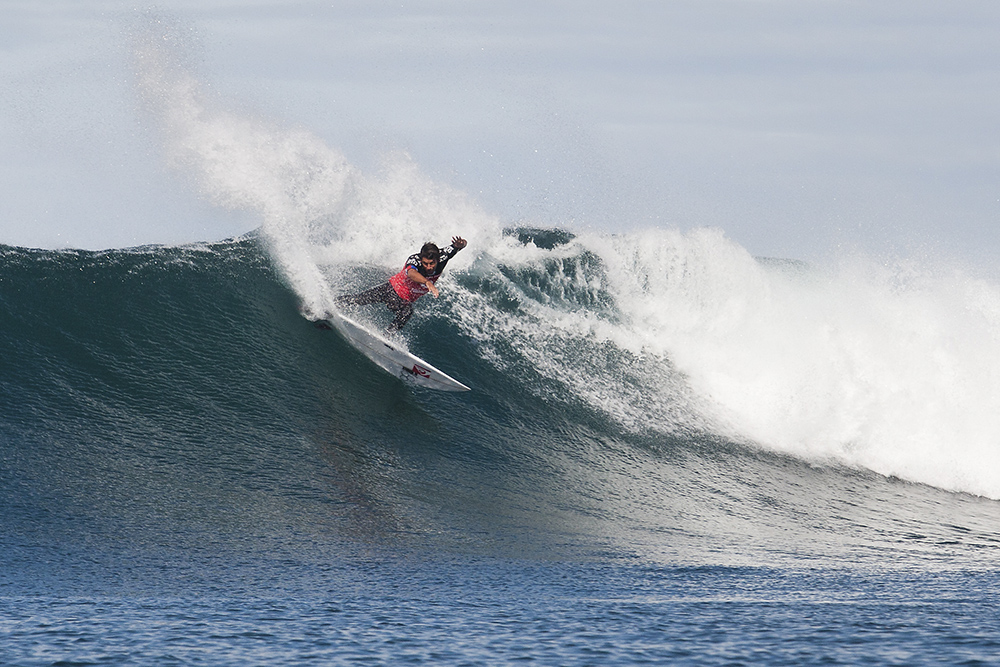 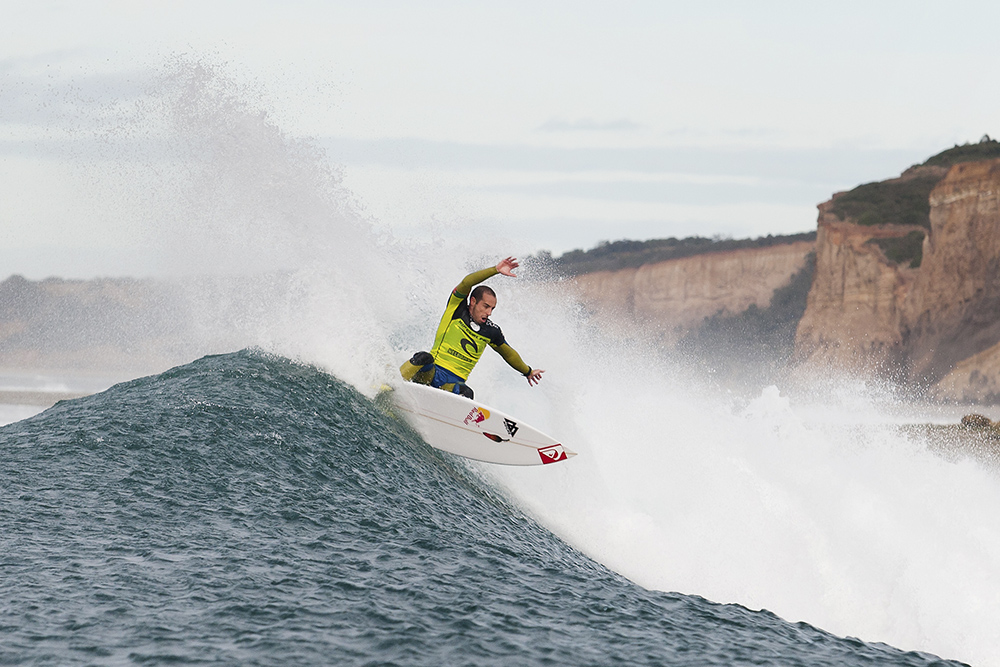