Were you watching last night? How did you choose? Big wave insanity at Jaws or a world title race on a razor’s edge on the same island… Flipped a coin for mad Jaws as opposed to perfect Honolua, helpfully Jaws was called off due to the very real possibility of carnage, leaving Kai Lenny to put on a tow masterclass, so attention switched, in a timely fashion to the ladies. In time for Alana Blanchard to shut the door on Lakey Peterson.

“I was not expecting it to happen just then,” said Gilmore in an emotional post-heat interview. “I was feeling so nervous, that was an intense heat and Alana (Blanchard) just went to town. I can’t believe it. I just want to thank everyone, my friends and my family and everyone that gets me here and lets me do what I do. My parents are back in Australia, all my friends that flew here to watch and my sister Whitney, who does so much for me. I want to thank everyone at Roxy and everybody that’s helped me and supported me in my career up to this point. The WSL, every single thing they’ve done for us, for the women, it’s just unbelievable. All the locals for letting us surf this wave to ourselves. Everyone who puts on this event, my coach Jake Patterson, my shaper Darren Handley, who’s made the best boards for me for the last 13 or 14 years. Without all these people I couldn’t have done it. I’d like to dedicate this win to Pierre Agnes.”

This victory sees her equal the record for the most women’s world titles (currently held by Layne Beachley) and puts Gilmore, 30, in an elite class within surfing’s World Champions – only two other individuals have accomplished the feat of earning seven World Titles: Beachley (AUS) (7) and Kelly Slater (USA) (11).

“Layne, it’s an honour to sit alongside you,” continued Gilmore. “You’ve been a huge inspiration for my entire career and for so many female surfers all around the world so to equal you is amazing. Thank you for setting the standard. I’m just going to lap up seven titles – this is so, so cool.”

Gilmore won her first world title in her rookie season (2007) and became the first surfer ever (male or female) to accomplish such a feat. She went on to claim three more consecutive titles (2008, 2009 and 2010) and has racked up an impressive 29 Championship Tour victories during her career, second only to Slater.

The now 7X World Champion (2007, 2008, 2009, 2010, 2012, 2014, 2018) narrowly missed out on clinching her seventh title in Maui last year, but came into the event this year in first place on the Jeep Leaderboard with three of event wins so far this season at Bells Beach, Australia; Saquarema, Brazil and Jeffreys Bay South Africa. A thrilling year-long battle with Lakey Peterson (USA), who was on the hunt for her maiden world title, saw the pair trade the Jeep Leader Jersey until Gilmore’s cemented her place atop the rankings following her with at the Corona Open J-Bay.

Gilmore is also the 4X defending event winner in Maui and will look to top off her incredible season with one final victory in Honolua Bay. The newly crowned World Champion sailed through her Round 1 and 3 heats with her impeccable form.

Peterson’s world title hopes were dismantled after she was eliminated from the event in Round 2 at the hands of replacement surfer Alana Blanchard (HAW). Despite the early exit, 2018 marks Peterson’s best CT finish to date, who will finish up the year as runner-up.

“I just didn’t perform to my best ability today, but it’s just been an incredible season and so much fun,” said Peterson. “There’s still so much for me to learn and to grow from today and the whole year. Huge congratulations to Steph (Gilmore), what a beautiful surfer and it’s so great to have her as an inspiration — there’s no one more deserving. It hurts, but it’s been a really fun year and I’ve enjoyed every minute of it. I’m not done, I think the hurt will drive me even more next year. I think I’ve broke down a lot of barriers for myself and proved to that I can be in this position and going for a World Title at the end of the year.”
The Beachwaver Maui Pro will be broadcast LIVE on Facebook.com/WSL and WorldSurfLeague.com. Also check local listings for coverage from the WSL’s broadcast partners.

The Beachwaver Maui Pro ran through the opening three rounds of competition and narrowed the field down to eight from 18, setting the stage for the Quarterfinals.

Incredible surf was on offer for the world’s best surfers and it was Sally Fitzgibbons (AUS), Tatiana Weston-Webb (BRA), Carissa Moore (HAW) and newly crowned Gilmore that really capitalized on the excellent conditions to earn their place in the final eight. Meanwhile, top seeds Lakey Peterson (USA) and Caroline Marks (USA) fell in Round 2 at the hands of Alana Blanchard (HAW) and Paige Hareb (NZL) respectively.

Wildcard Alana Blanchard (HAW) advances to Round 3 of the 2018 Beachwaver Maui Pro after winning Heat 3 of Round 2 at Honolua Bay, Maui, Hawaii, USA. With the heat win Blanchard eliminated Lakey Peterson (USA) and ended her hopes for maiden World Title.

Stephanie Gilmore of Australia won Heat 3 of Round 1 at the Beachwaver Maui Pro, Honolua Bay, 2018.

Paige Hareb (NZ) advances to Round 3 of the 2018 Beachwaver Maui Pro after winning Heat 2 of Round 2 at Honolua Bay, Maui, Hawaii, USA.

The fifth stop of the 2015 Samsung Galaxy WSL Championship Tour (CT), the Fiji Women’s Pro, got underway today with Round 1 running in solid conditions at Cloudbreak. With the swell steadily increasing, the day saw big scores, barrels and upsets, including defending event winner Sally Fitzgibbons (AUS) being sent to elimination Round 2 at the hands of Laura Enever (AUS). 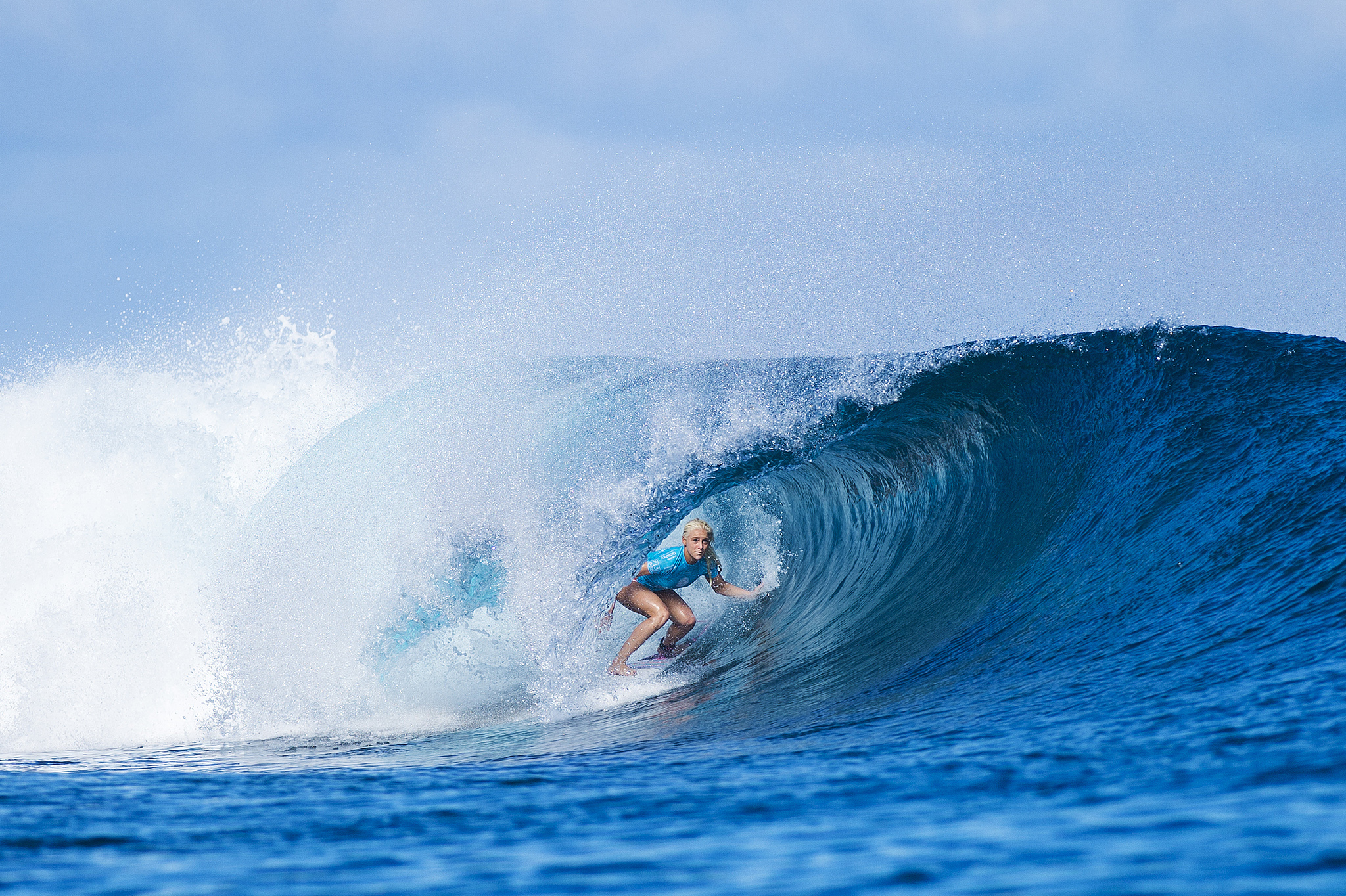 The day began with Lakey Peterson (USA) taking on Alessa Quizon (HAW) and rookie Tatiana Weston-Webb (HAW) in the opening heat of Round 1. Peterson came back from a disappointing result in Fiji last year to sail through to Round 3 with great wave selection despite a strong showing from Weston-Webb. A final attempt from the rookie fell just short and she will surf again in Round 2 alongside Quizon.

“It’s such an amazing wave and it’s really challenging and tricky,” said Peterson. “Last year I didn’t have the best go but I’ve come here a few times since then. It’s a great opportunity to surf a different type of wave so I’m trying to really enjoy that and learn from every heat. It’s definitely intimidating but it will be fun. All the girls have really been charging and we’re all really excited about pushing the sport.” 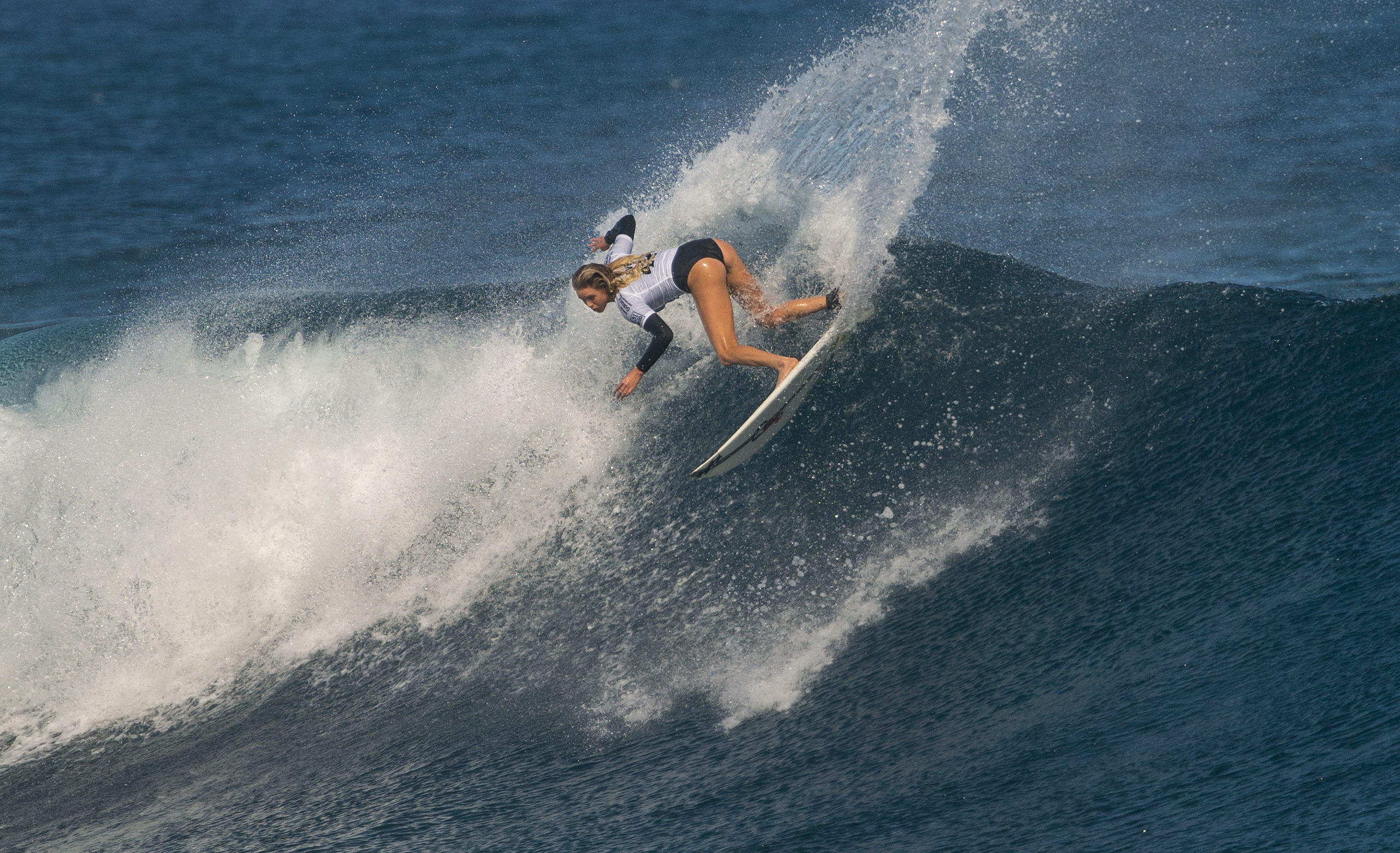 An incredible battle unfolded between defending event winner Sally Fitzgibbons (AUS) and Laura Enever (AUS) in Heat 2 against Coco Ho (HAW). Fitzgibbons opened strong, posting an excellent 8.00 on her first ride, backing it up with a 6.83 to leave her opponents in a combination situation. Enever came back with a near-perfect 9.43 for three powerful turns on a set wave but Fitzgibbons answered with a 9-point ride of her own to solidify her lead. An 8.37 from Enever in the final moments saw her snatch the lead from the current world no. 6, sending her to elimination Round 2 for the first time this year and causing the upset of the day. 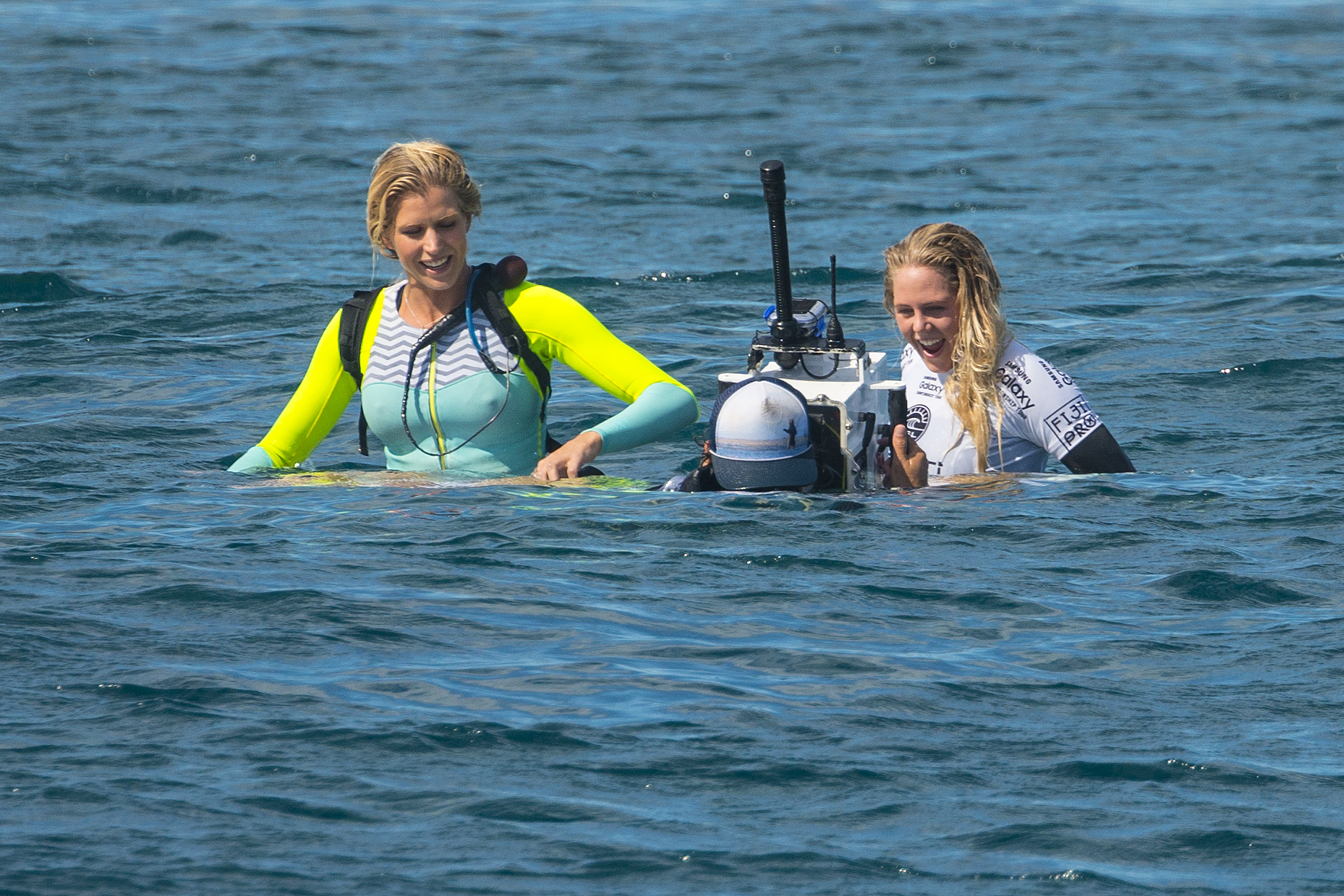 “It’s a big relief to skip Round 2,” Enever said. “I’m so stoked. It really started pulsing for our heat and we were going wave for wave. I feel really comfortable out there. It’s been awesome, all the girls are ripping and I hope we get some more waves.” 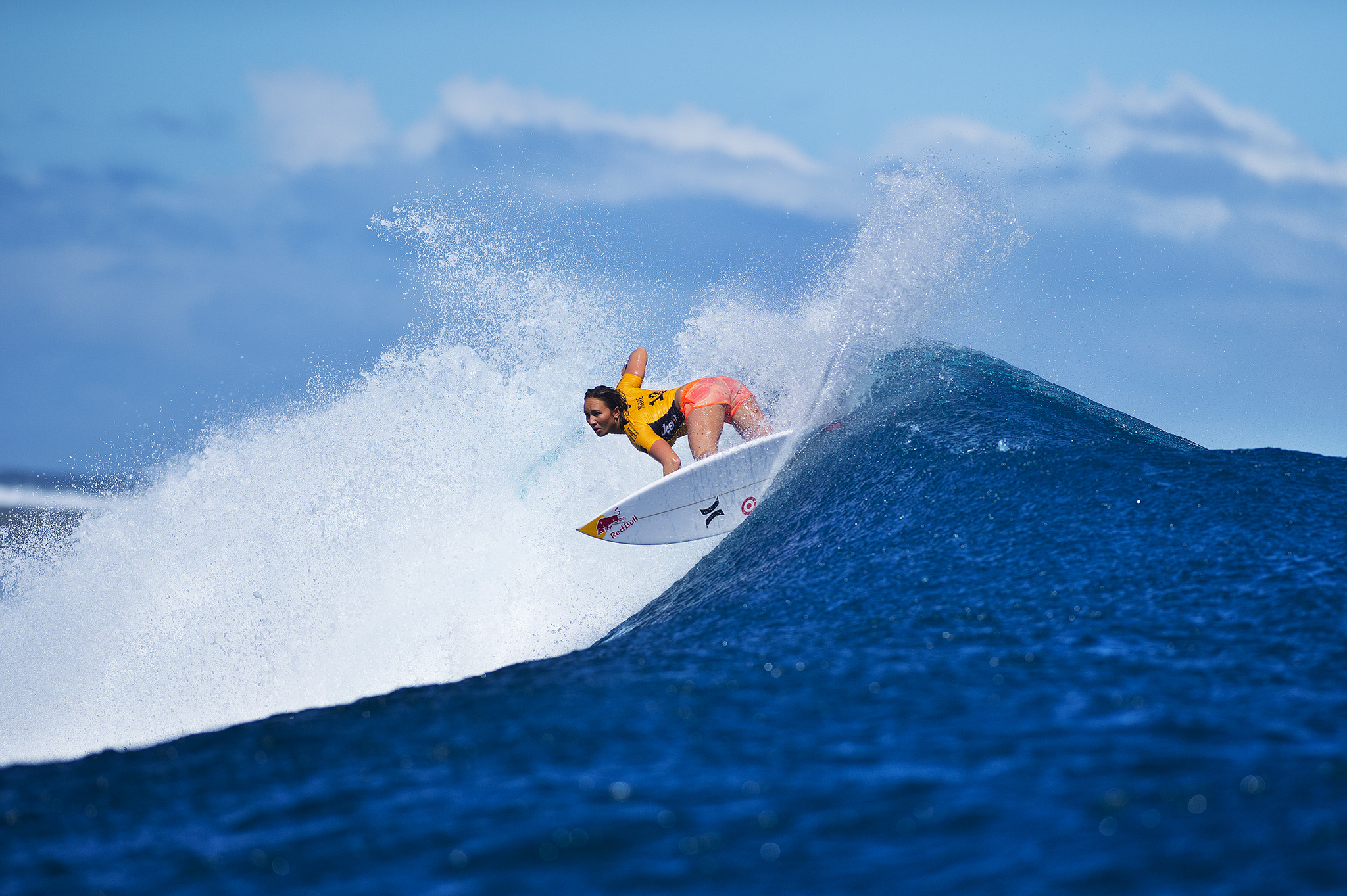 Jeep rankings leader Carissa Moore (HAW) posted the score of the heat with ten minutes remaining, finding a barrel for an 8.50 and securing her place in Round 3 with a back-up 6.10. Dimity Stoyle (AUS) and wildcard Mahina Maeda (HAW) will have to battle again in Round 2 when competition continues.

“I’m stoked that I got to come here early and experience some bigger surf,” Moore said. “It’s definitely really tough and I know that there’s girls like Sally (Fitzgibbons) and Courtney (Conlogue) who have a lot of experience here so I’m trying to catch up.”

No. 2 on the Jeep Leaderboard, Courtney Conlogue (USA), continued her excellent run of form today with a Round 1 win over European threat Johanne Defay (FRA) and replacement surfer Keely Andrew (AUS) thanks to an 11.50 heat total.

“I had so much anticipation to get out here,” said Conlogue. “I’ve been out here for a week now. Last year I was frothing to come surf Fiji, it was one of my dream spots. To not be able to surf it made it that much sweeter to get the jersey on this year and get out in the lineup. I’m so excited about the prospect of some bigger waves to come.”

Tyler Wright (AUS) took an early lead in the penultimate heat of the day, where she faced Silvana Lima (BRA) and Sage Erickson (USA). Lima and Erickson were left trailing through the first half of the heat but came back with an excellent 8.33 and 7.10 respectively to put them back in contention. Neither could find the scores they needed and Wright sails through to Round 3.

“It feels good to win that heat,” Wright said. “I felt a little bit off balance on my new board but once I figured that out I was really enjoying it out there. There’s so much water moving and waves everywhere so I let everyone do their thing and do mine.” 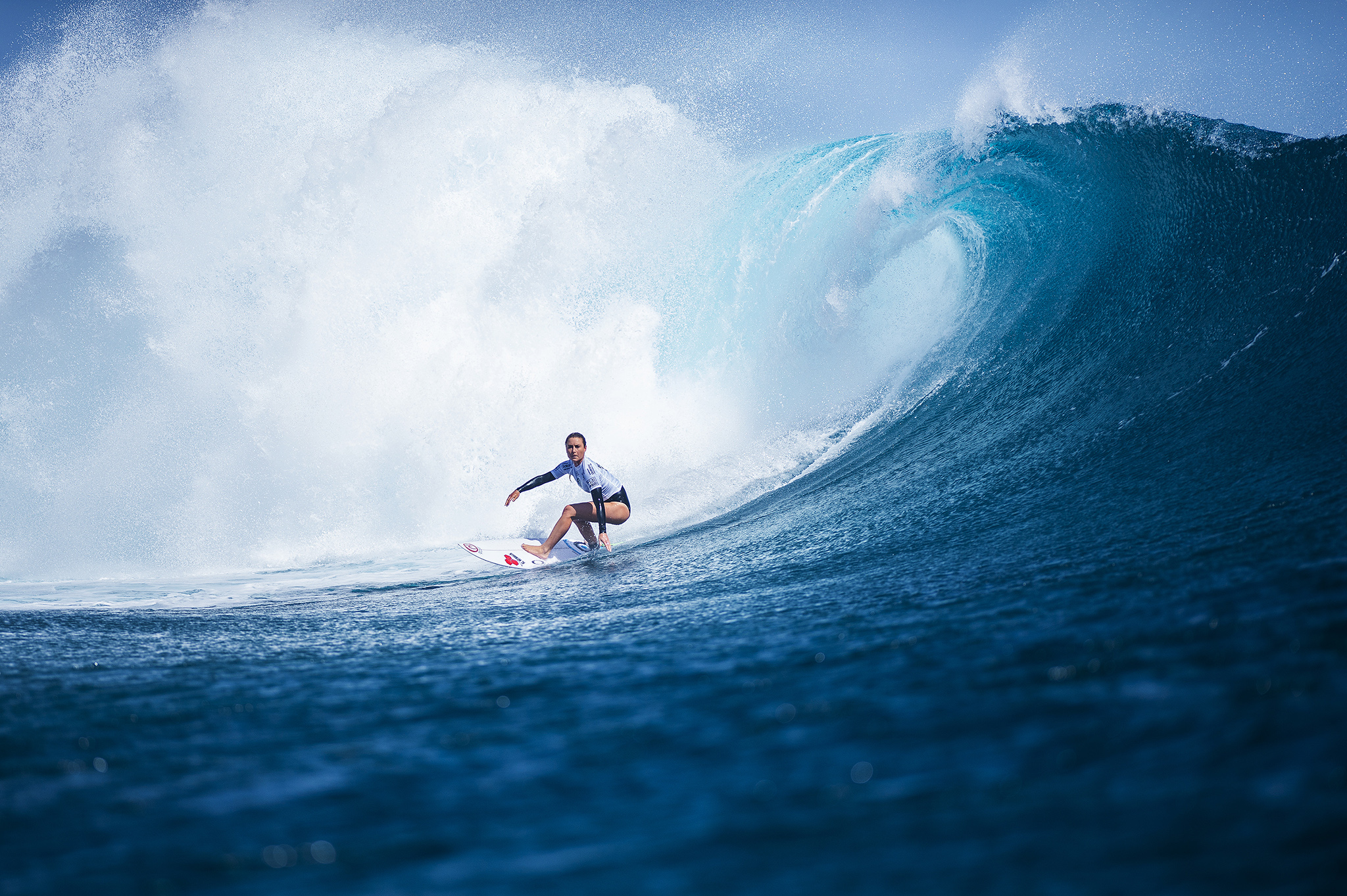 An exciting exchange played out in the final heat of the day between Malia Manuel (HAW), Nikki Van Dijk (AUS) and Bianca Buitendag (ZAF), leaving the South African in first place with others close behind. Manuel quickly stole the lead but Buitendag posted an excellent 9.43 for a series of power turns to reclaim the top spot and the win.

“This is my third time here and last year I came straight after Brazil so spent more than two weeks here before the contest started,” said Buitendag. “It’s every goofyfooters dream so it’s more of a holiday than preparation and it seems to be paying off.” 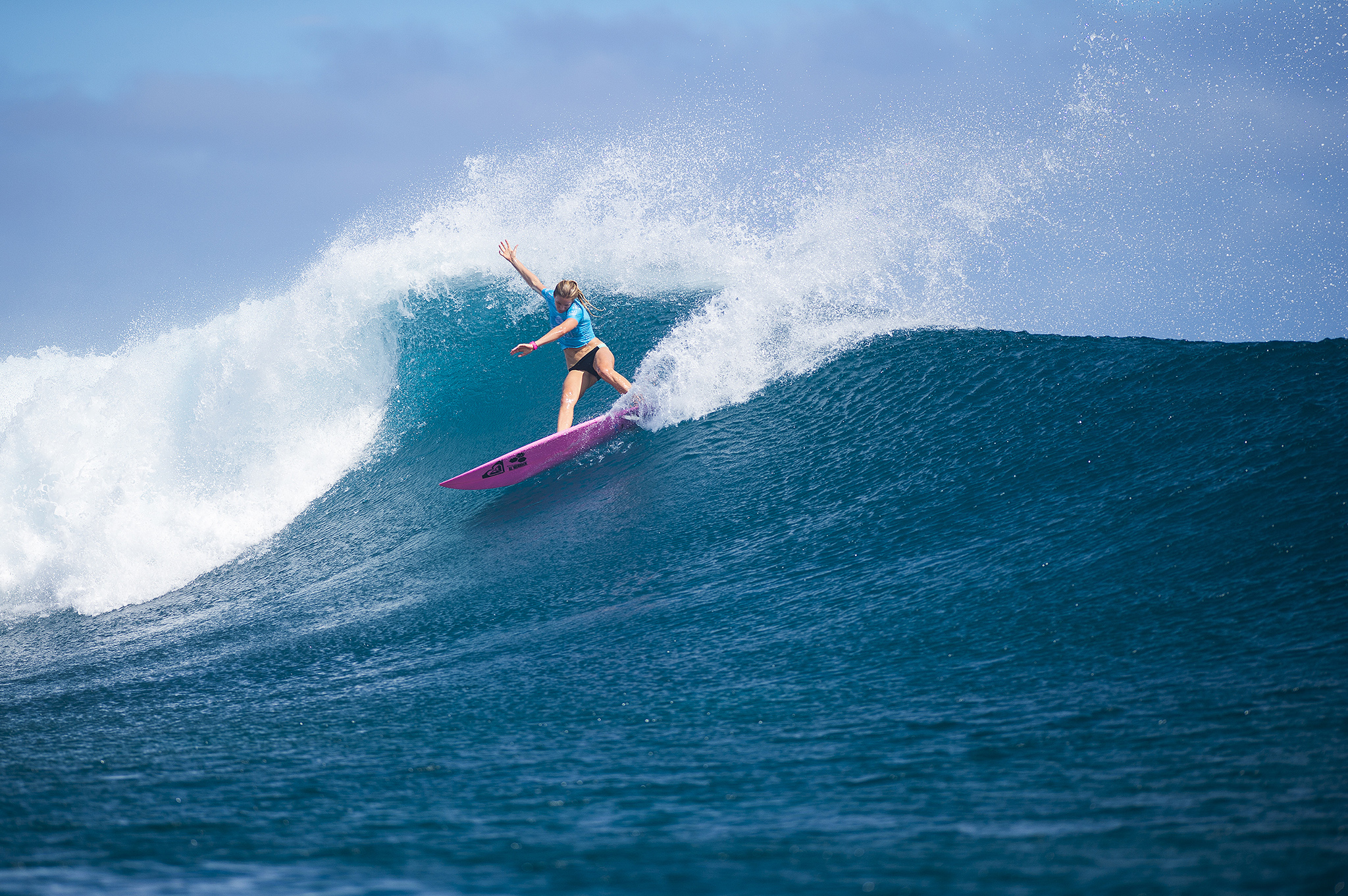 The Fiji Women’s Pro will be webcast LIVE on WorldSurfLeague.com. The world’s best surfing will also be broadcast LIVE on Fox Sports in Australia, MCS Extreme in France, EDGE Sports in China, South Korea, Malaysia and other territories and on Globo TV  in Brazil.
Fiji Women’s Pro Round 1 Results: