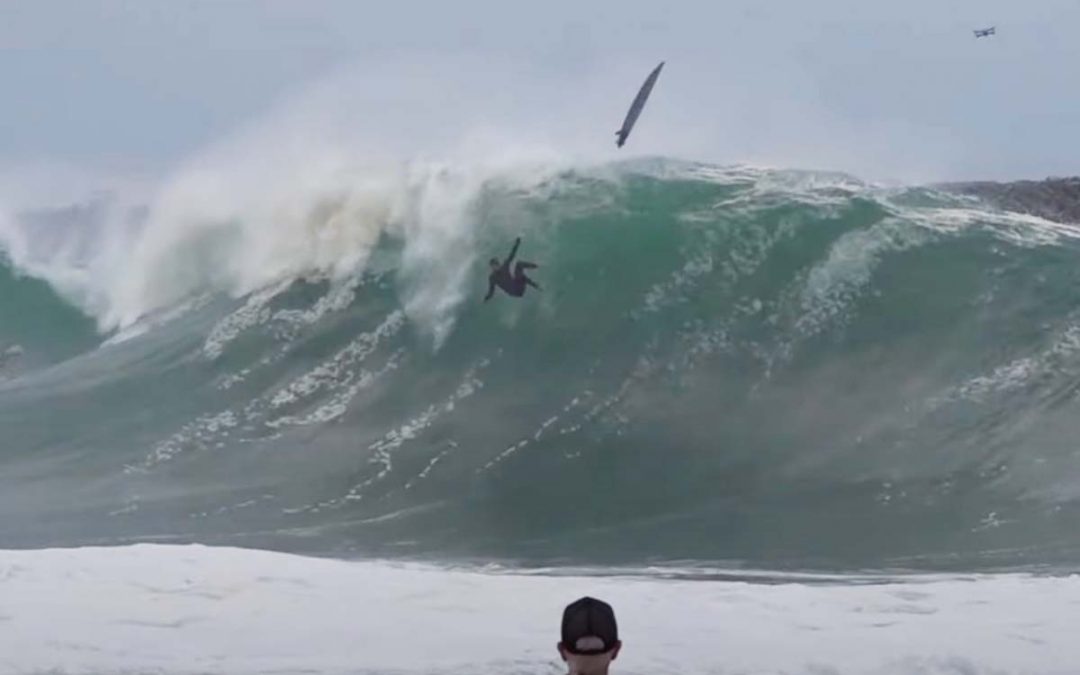 A collection of the 50 best (as in worst) wipeouts from the Wedge. Surfers, bodyboarders and bodysurfers all getting supreme drilled into the sand, seawater enema anyone?

Which Is The Worst Wipeout?!?

The wipeout of the year award is a hell of a battle. Watch the clip and try and make a call, it’s flipping hard.

Garrett’s Mav’s beasting damaged him, unsurprisingly, but will it be the winner on the night? All five contenders are brutal as hell…

Let us know your pick on the social: Twitter/Instagram/Facebook.

The remaining nominations for the 2016 World Surf League (WSL) Big Wave Awards have been released, with video of the five most spectacular wipeouts of the year leading the way along with the top overall performer lists for men and women. This year’s event features over $250,000 in total prize money, and with four categories already public, the highly anticipated TAG Heuer Wipeout of the Year, the Surfline Best Overall Performance, and the Women’s Best Overall Performance award nominees have been announced today.

The performance awards acknowledge the top ten men and top five women over the course of the last 12 months based on every ride captured on video or still images all around the world. Shortlisted surfers include big wave heavyweights Shane Dorian, Keala Kennelly and Mark Healey, as well as the 2015/16 Big Wave Tour Champion, Greg Long. The nominations also include up-and-comers Will Skudin, Kai Lenny and Emi Erickson. Photographs and motion pictures of all the Surfline Overall and Women’s Best Performance nominated surfers can be viewed at WorldSurfLeague.com/BigWave.

While the performance categories salute the most successful rides of the past year, the TAG Heuer Wipeout division presents the most amazing unsuccessful rides for online review. Video of the modern surfing’s greatest aquatic mishaps has become a popular viral staple among surfing fans worldwide, often attracting millions of views and taking its place as a good-natured fixture in the Big Wave Awards proceedings.

“Since the first surf movies of the 1950s, celebrating the best wipeouts of the year has been a time-honored tradition in the surfing community,” said Bill Sharp, event director for the WSL Big Wave Awards.  “It’s not a category anyone intentionally sets out to win, but at the end of the season the surfers themselves appreciate being honored for showing their mettle even if it went wrong along the way. This El Niño year produced the best big waves in history and you can probably say the same thing about the TAG Heuer Wipeout nominees — most of them have become internet sensations individually, but all five together are two minutes of magnificent mayhem and must be seen to be believed. It might be hard to fathom, but all the nominees came through their ordeals OK and will be happy to be joining us at the awards show.”

The 16th annual WSL Big Wave Awards competition window ran from March 21, 2015 through March 15, 2016. Every wave ridden at every big wave break around the world in this period was eligible for consideration across seven categories. Now that the nominees have been selected, several judging panels will review the photographic and video evidence and determine the final placings. This year, more magnitude than ever rides on the Surfline Overall Performance rankings as the four highest-placing surfers not already qualified will gain seeded spots on the 2016/17 WSL Big Wave Tour which spans six one-day events in locations around the globe.

The winners will be crowned at a gala awards show at the Grove Theater in Anaheim, California on April 23.

The TAG Heuer Wipeout of the Year Award goes to the surfer who displays the most committed — yet least successful — wave of the event window. Truly epitomizing the courage needed for big wave surfing, the surfers nominated for this accolade show no shortage of heart and commitment. The winner of this award will receive $3,000 and the videographer who captured the wipeout will receive $2,000. Two of the five wipeouts took place at the Maverick’s California during some of the most massive El Niño winter swells, including Matt Becker, the young charger from Santa Barbara, California, and Garrett McNamara from Hawaii. Pedro Calado joins this year’s shortlist with a massive nosedive at Puerto Escondido, Mexico, as well as Niccolo Porcella for his over-the-falls drop at Teahupoo, Tahiti. Rounding out the nominations is Tom Dosland for his must-watch-tethered-dangle at Jaws, Maui. 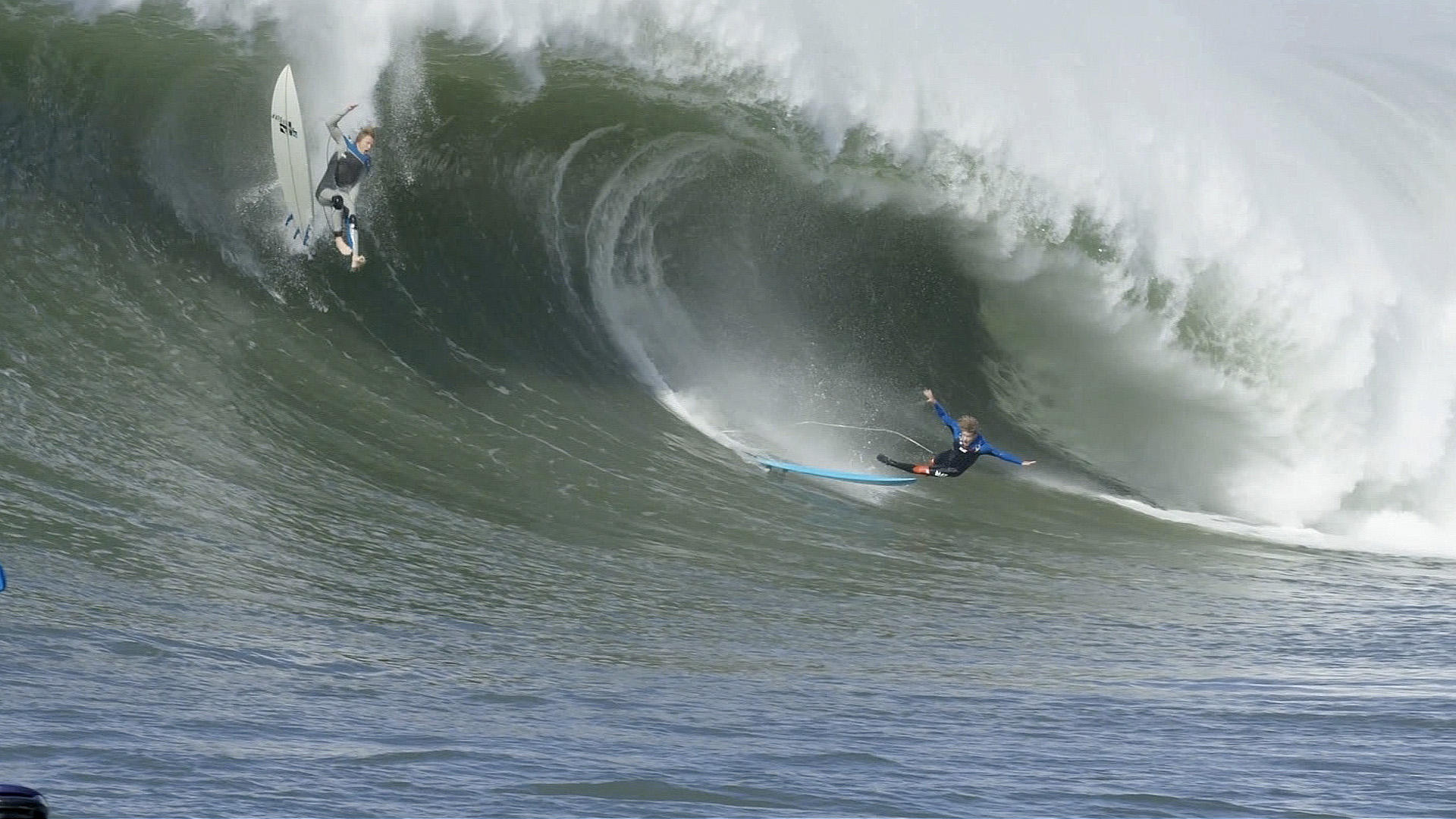 Taj, Mathews and The Most Dangerous Photo Ever?

Yessir this is crazy. Inspired by the work of French photog Laurent Pujol, who we’ve frequently featured in Carve, Taj Burrow, Mark Mathews and Red Bull have upped the ante with the two guys tow in and the one behind shoots photos concept. Watch the video then see the story here…

Flipping ouch. Ricardo and one of the best wipeouts we’ve seen in ages…