Not sure how they do it but the WSL/Quik/Roxy crew have scored in France yet again. Finals day has been pumping down in Hossegor.

Short version: waves were sick. Carissa Moore smashed Caroline Marks in the final of the Roxy Pro and Jeremy Flores put on a clinic against Italo Ferreira to take the Quiksilver Pro. How sweet to win your sponsor’s event at your adopted home break? 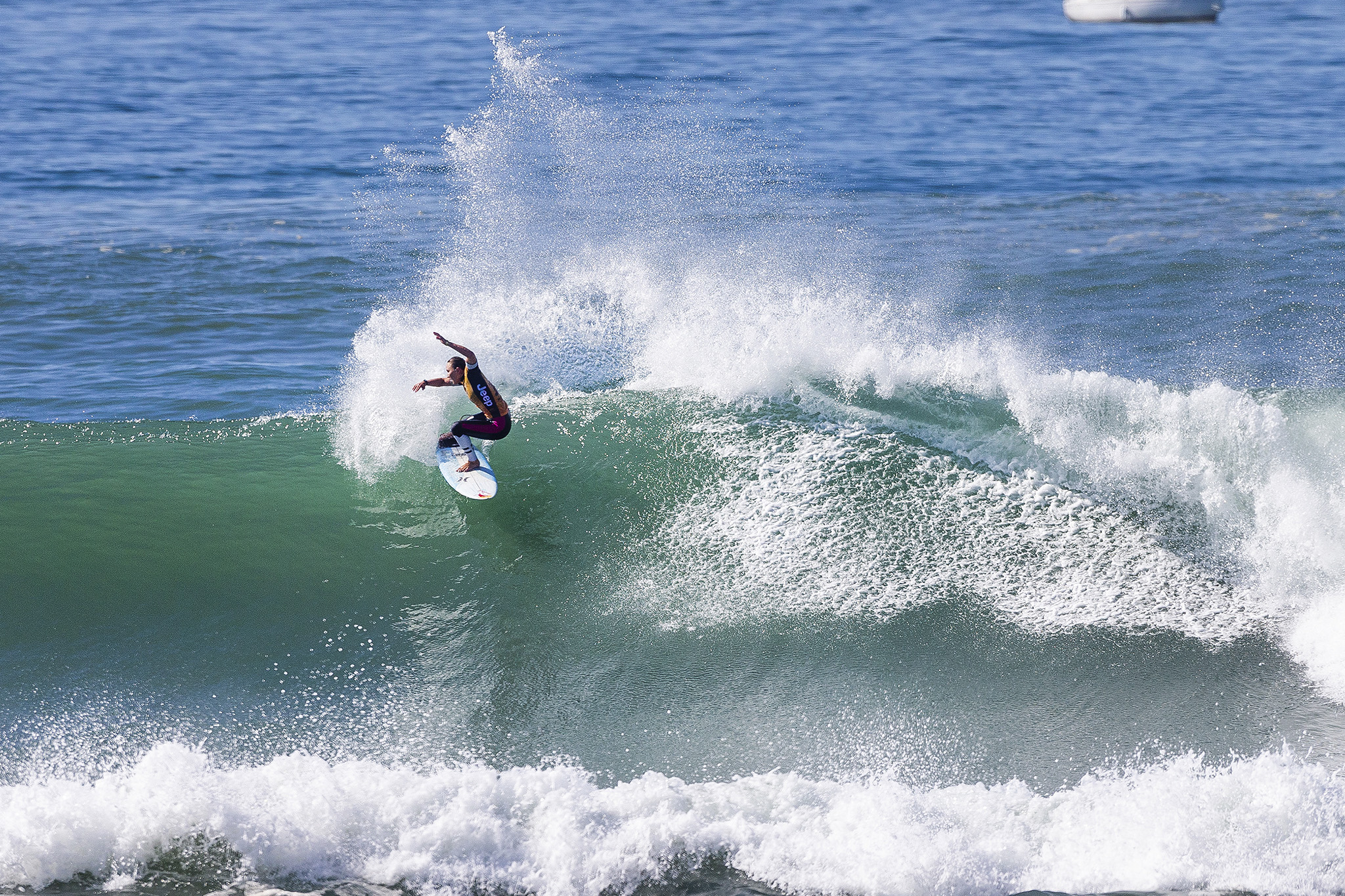 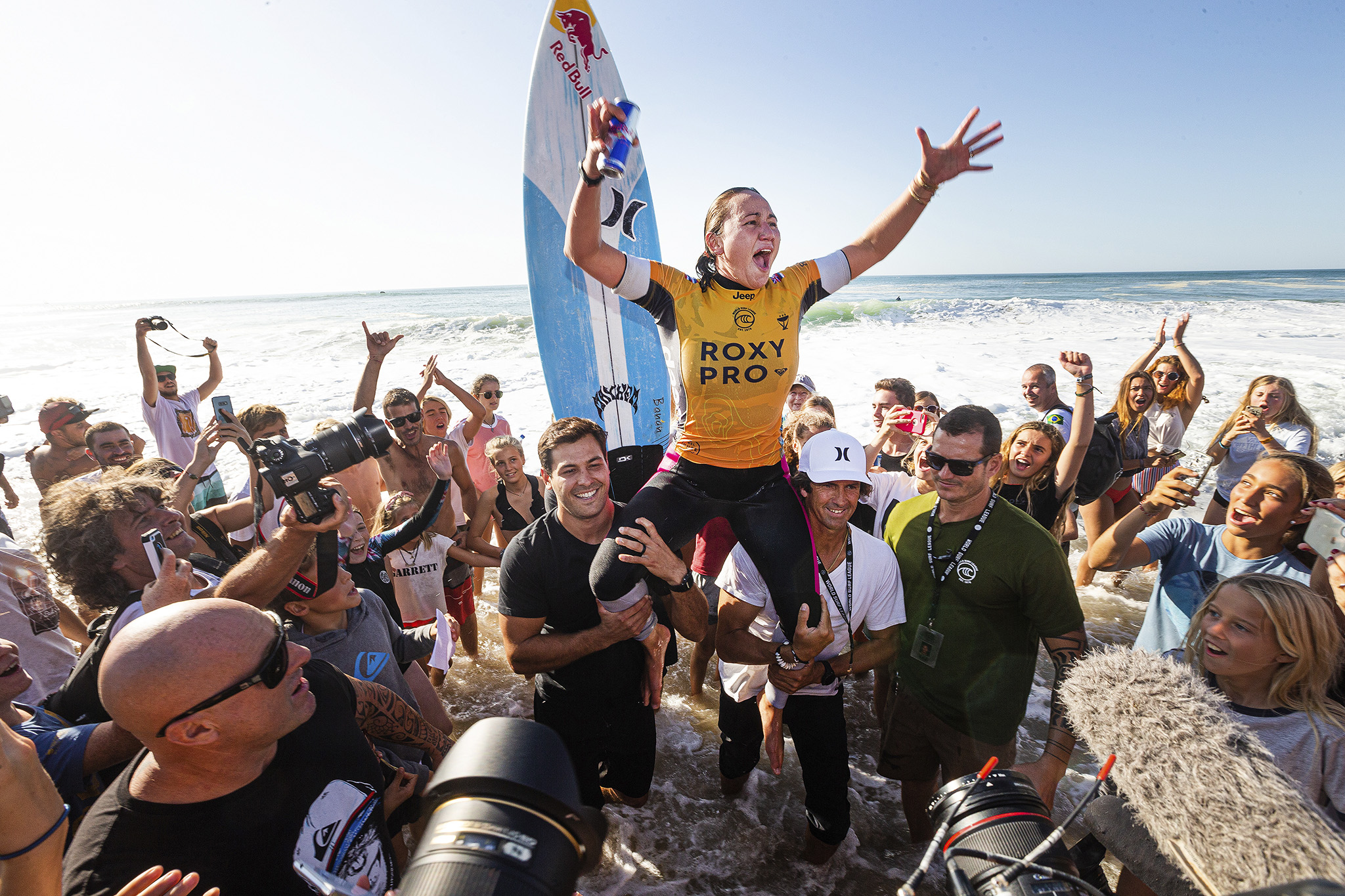 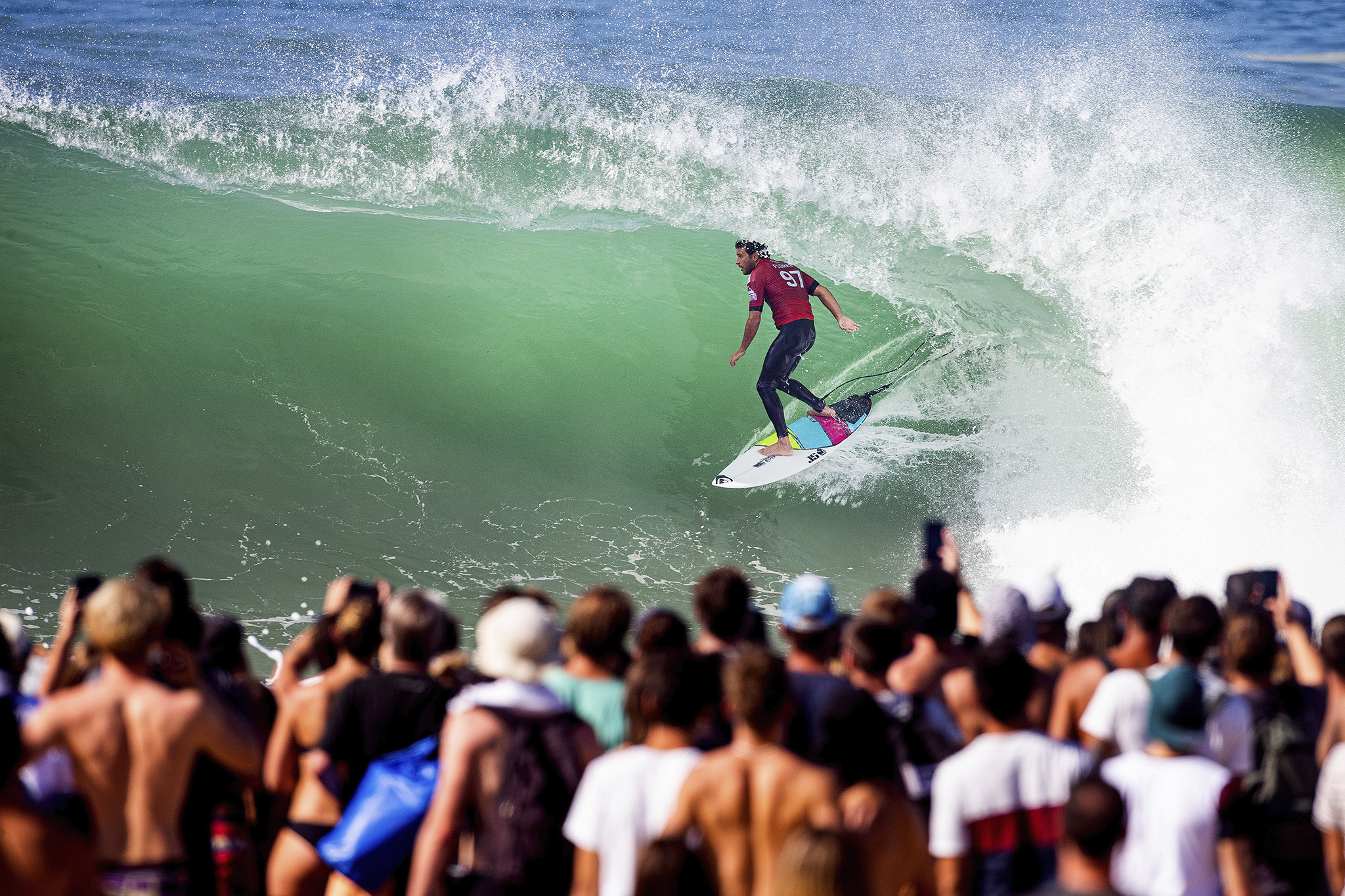 Jeremy Flores and the frothing crowd. Photo by Laurent Masurel/WSL 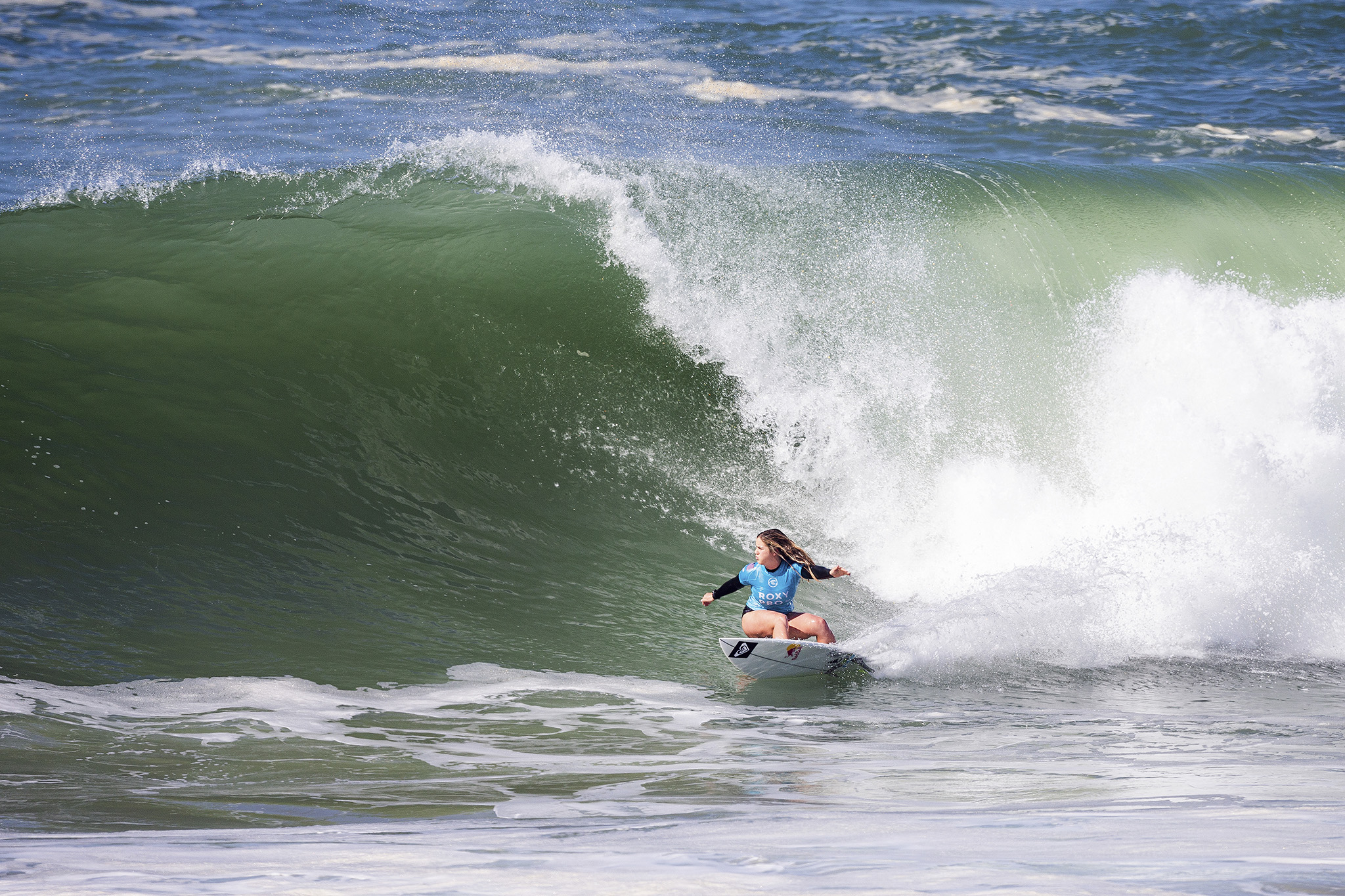 Caroline Marks made the Roxy final but couldn’t match Riss in the tube. Photo by Laurent Masurel/WSL. 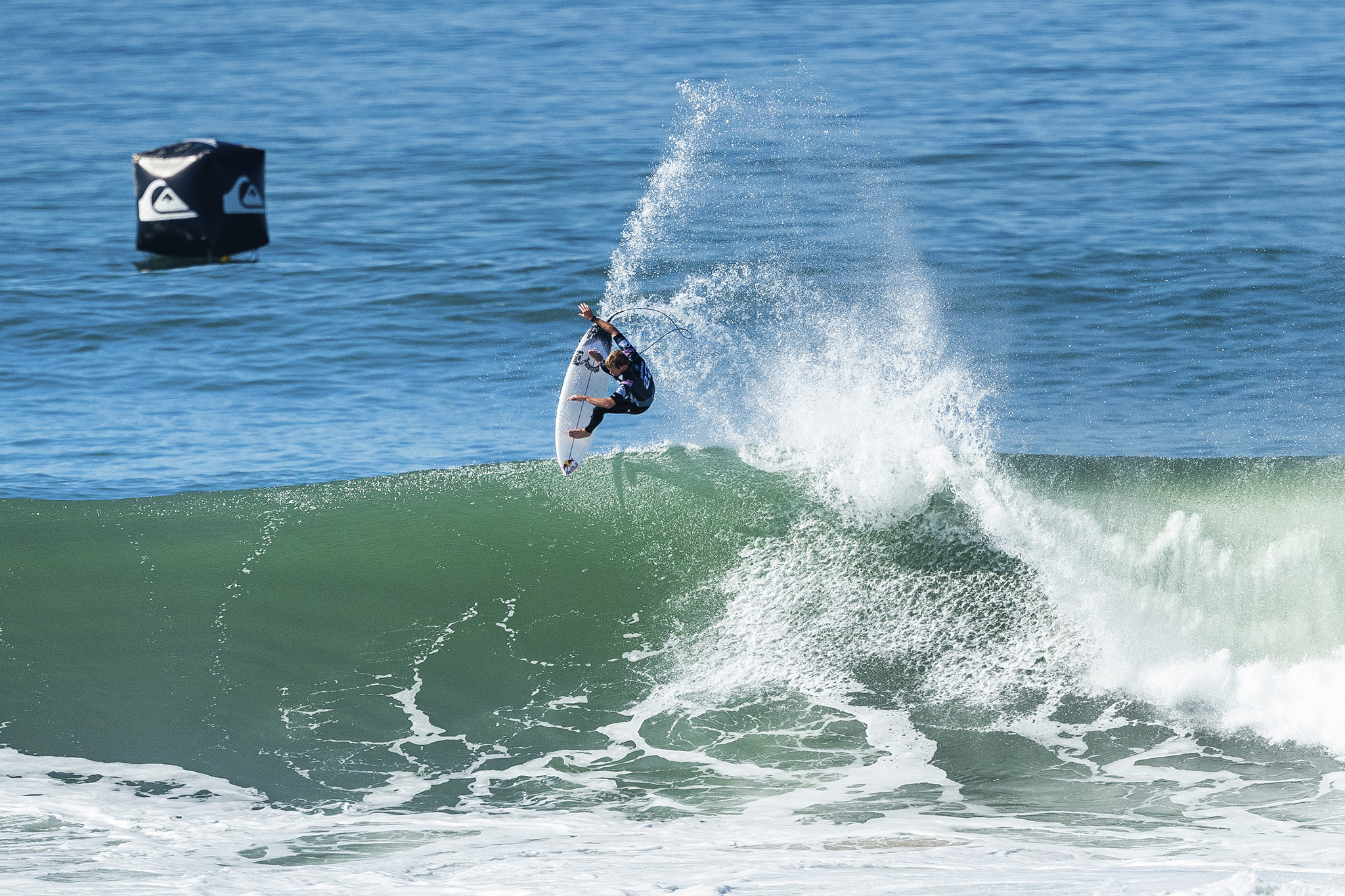 Kolohe Andino missed a chance to close the gap on Gabby with an equal 5th finish. Photo by Damien Poullenot/WSL. 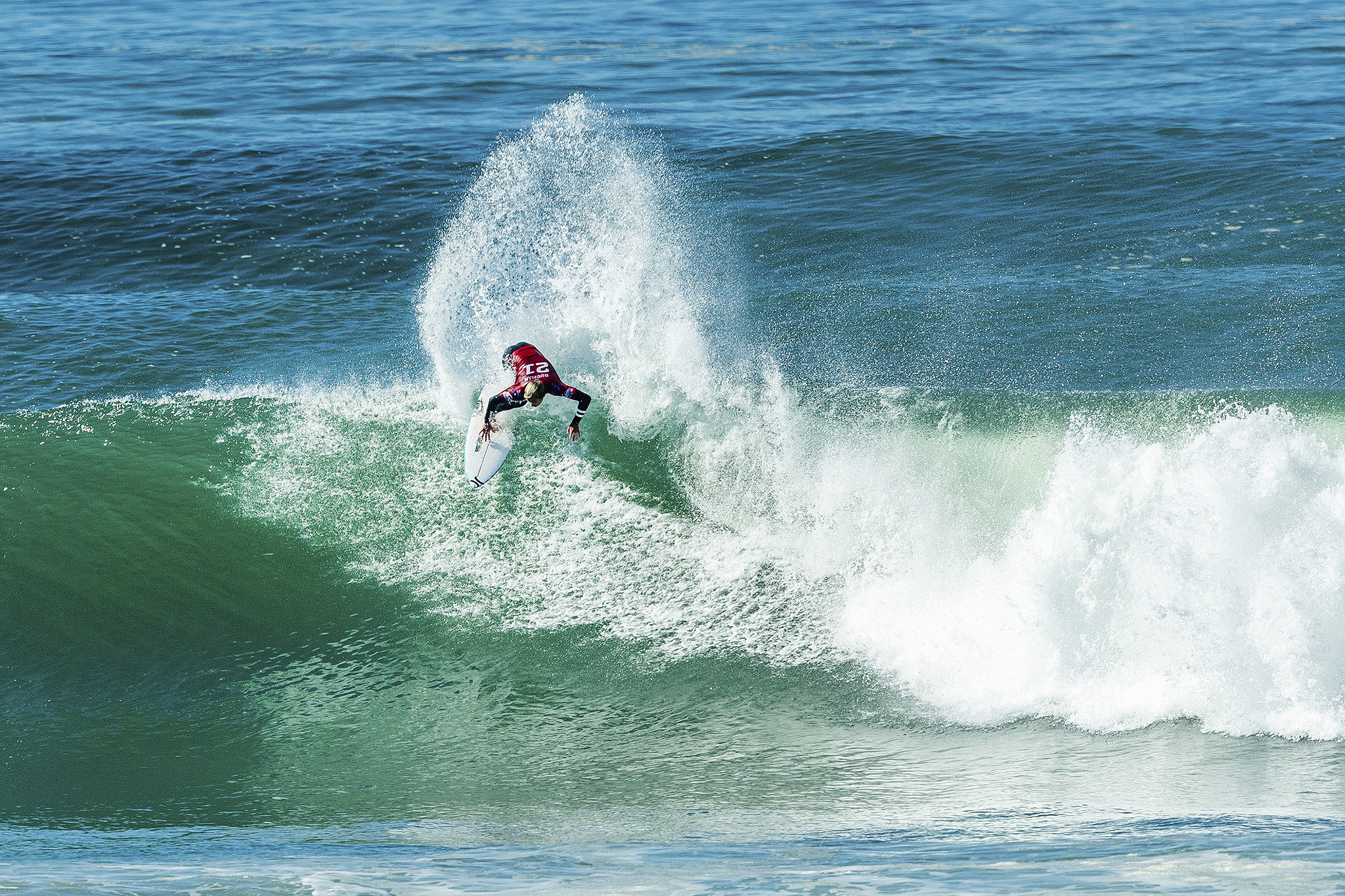 Adrian Buchan took out tour leader Medina on his way to the quarters. Photo by Damien Poullenot/WSL 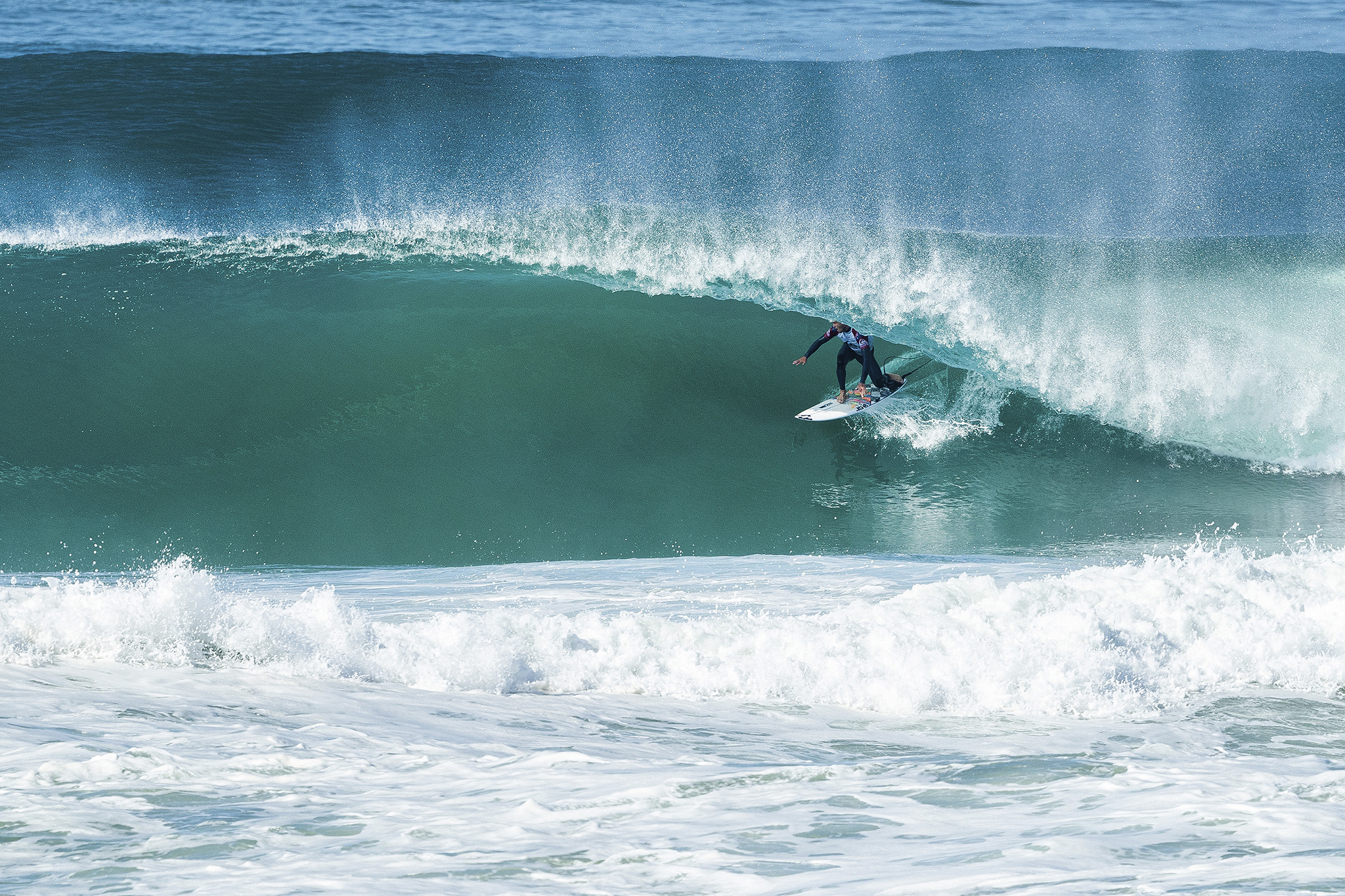 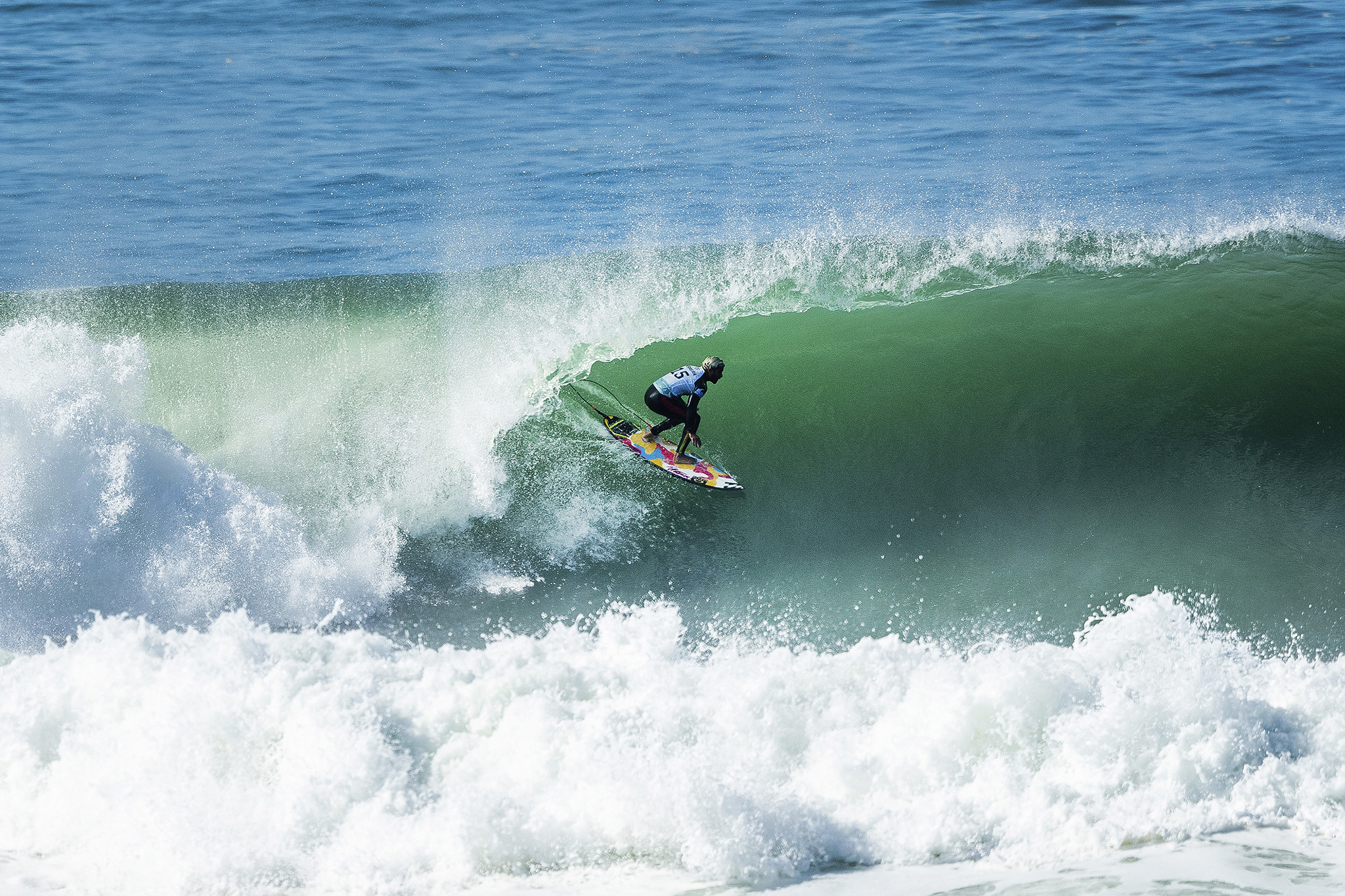 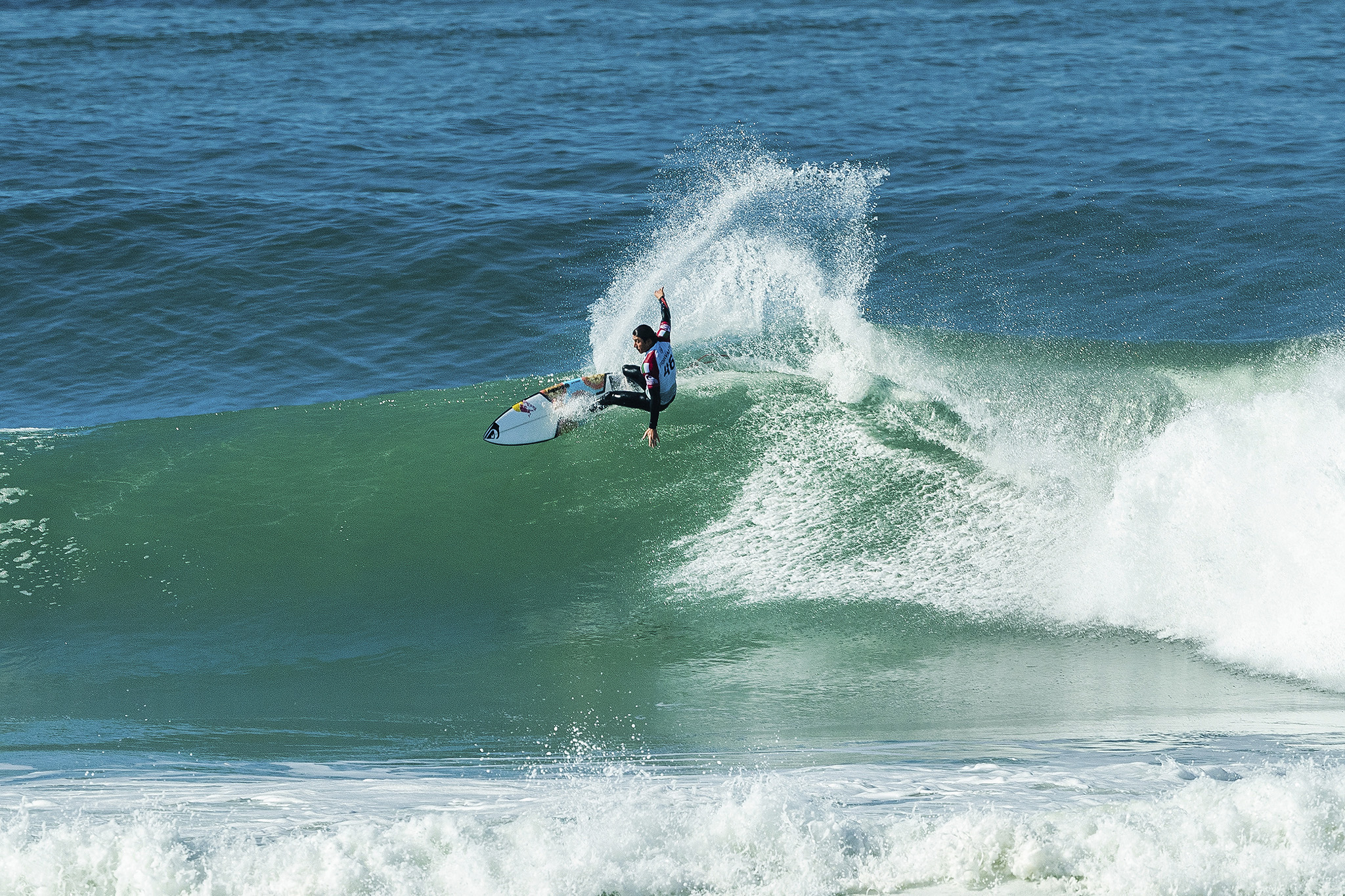 Leonardo Fioravanti made the semis in a real return to form. Photo by Damien Poullenot/WSL 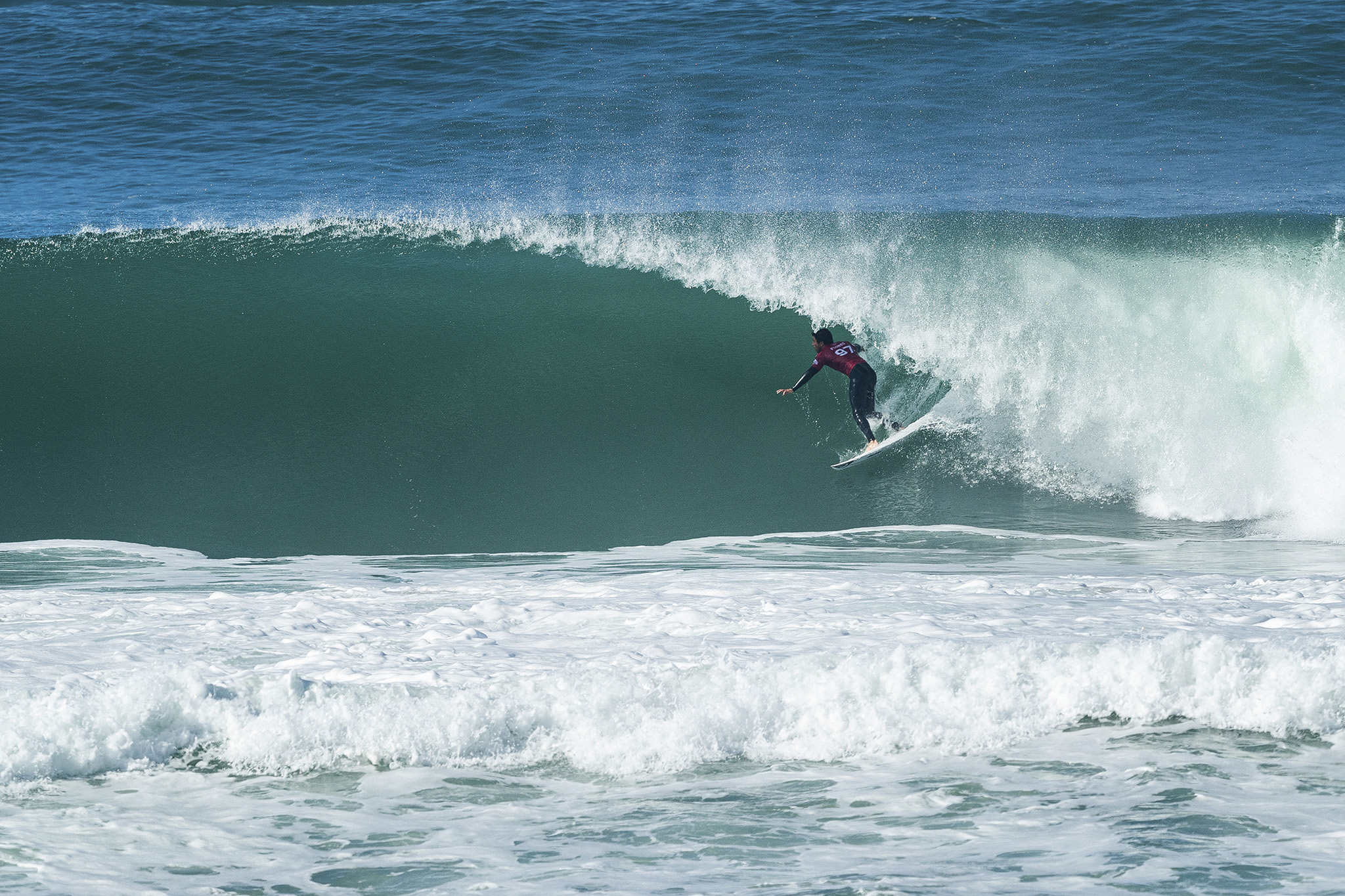 Jeremy Flores looked like the man from the first heat of the day. He said local advantage doesn’t apply so much in Hossegor as it’s so random. Got to help though. Photo by Damien Poullenot/WSL. 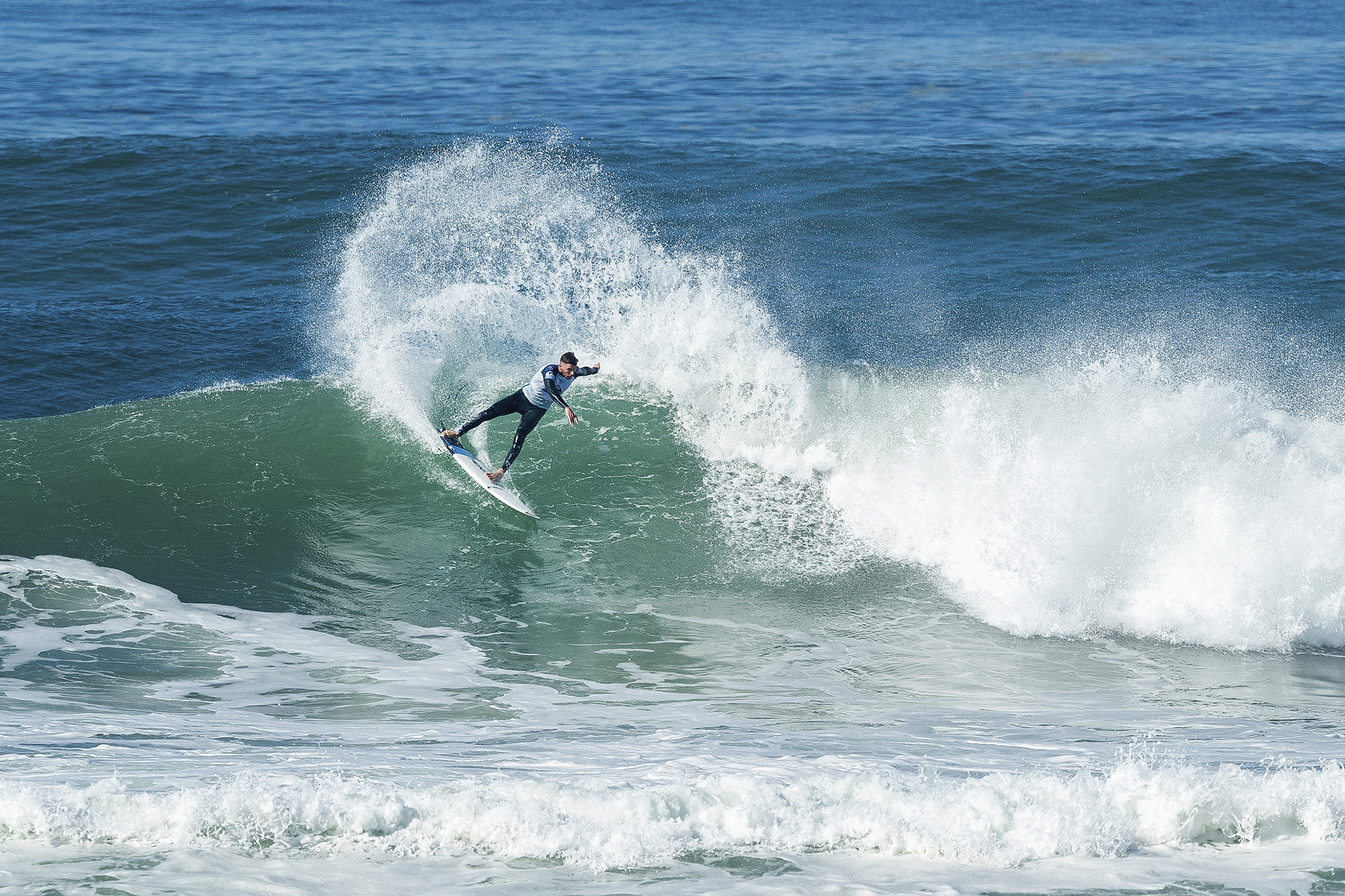 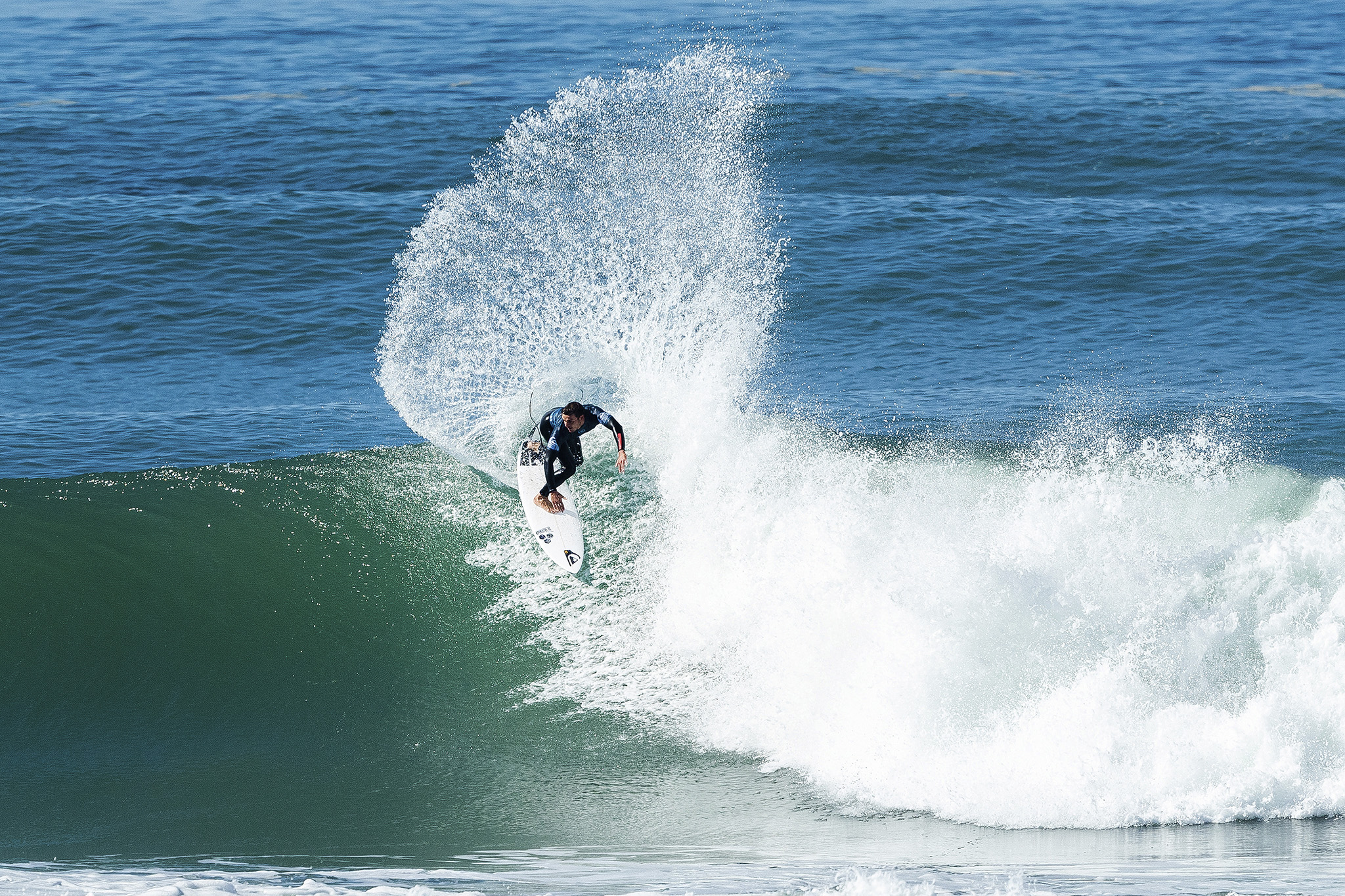 Local wildcard Marc Lacomare did some damage on his way to the quarters. Photo by Damien Poullenot/WSL

Stops No. 8 and 9 on the women and men’s 2019 World Surf League (WSL) Championship Tour (CT) respectively, the Quiksilver Pro and Roxy Pro France, have been graced with excellent conditions, and featured amazing performances on both the thumping shore break of La Graviere and the long open walls of La Nord. The events culminated on a picture-perfect beach day in France to crown Flores and Moore in Hossegor.

“I really want to thank all the fans here on the beach,” said Flores. “You have always been there supporting me, all those years, through the highs and lows, and I honestly could never have done this without you. I’m dedicating this win to Pierre Agnes, without whom I would never be who I am today.”

Local hero Jeremy Flores (FRA) claimed a historic first win for a French surfer at the Quiksilver Pro France in his 14th appearance on home soil. Hailed as one of the best tube riders in the world, Flores demonstrated the immensity of his talent under the lip on Finals day today, locking in big numbers in four consecutive heats with barrels on his way to victory.

“Congrats to all the finalists today,” he continued. “And especially the girls, you guys stepped it up at La Graviere and that was amazing to watch. I honestly thought the day I win this event I’d retire straight after because that’s the one event I have dreamt of winning. But this feels a little early and I’ll be back next year to try and win another one!”

The Frenchman claims a career-fourth CT event win in the beach breaks that revealed him to the world and moves up to 9th on the Jeep leaderboard with his performance in Hossegor. His path to the Final today included victories over World No. 3 Jordy Smith (ZAF), last year’s event runner-up Ryan Callinan (AUS), Jack Freestone (AUS) and Ferreira in the last heat. Flores repeatedly found the best waves in his home lineup and posted huge numbers for his technical tube rides.

In the Final, Flores once again pulled the trigger first with a near-perfect barrel scored 9.67 in the opening three minutes of the exchange. Under pressure right away, Ferreira couldn’t quite select the right waves and despite a few attempts, only had minimal scores on the board for the majority of the heat. His required score of 9.51 to overtake Flores meant the Brasilian was never met and Ferreira had to settle for the runner-up spot.

Ferreira’s path to the Final started with a challenge in Round 4 when he took on Michel Bourez (FRA) in the big open walls of La Nord this morning. In the Quarterfinals, he then faced off his closest rival in the rankings in former World No. 4 Kolohe Andino (USA), and finally eliminated Leonardo Fioravanti (ITA) in the Semis. The Brasilian claims a second runner-up finish this season and climbed up to fourth on the Jeep leaderboard to close the gap with Toledo and Smith.

“I’m so glad to have made a Final with Jeremy and congrats to him,” said Ferreira. “It’s been a crazy week for me and this is dedicated to my uncle who passed away a couple of days ago, life is crazy. I’m excited to go down to Portugal for the next event.”

3X WSL Champion Carissa Moore (HAW) claims an astonishing 23rd win on the Championship Tour, further cementing her name alongside surfing’s greats. In an incredibly consistent season, the Hawaiian has made the Quarterfinals or better at each of the year’s eight stops, and won two of them. Chasing a fourth World Title, Moore distanced herself from Lakey Peterson (USA) with her win in France and will be hard to beat as the season heads to the final stops in Portugal and in her home nation of Hawaii.

“It’s been a pretty special year so far,” said Moore. “I feel like I’m learning so much, every step of the way, at every event and every year. This was definitely a special event, being able to share it with my husband and Mitch Ross, I have an incredible team of people behind me, my family and friends, my sponsors and the fans who were incredible.”

The current Jeep Yellow Leader Jersey Moore came into the Final against Caroline Marks (USA), bearing the confidence of two previous wins in Hossegor and it showed when the Hawaiian stepped up her game to start locking in deep La Graviere barrels. Moore started on her forehand with a clean tube scored 8.60 to take a strong lead. While Marks struggled to find her own waves, Moore continued to build momentum and eventually found an even bigger, longer and more technical barrel on her backhand this time to belt a 9.00 point ride and take the event out.

“It was so cool I’ve actually never spent much time surfing La Graviere,” she continued. “I didn’t have any expectations and when I got those two barrels I was elated and to share it with the crowds that were just a few feet away from me was special. ”

After a breakout rookie season last year, Caroline Marks (USA) continues to impress with dominant performances in all types of conditions as she demonstrated in France this past week. She earlier eliminated the 2018 event winner Courtney Conlogue (USA), and local favorite Johanne Defay (FRA) on her way to the Final. This result pushes the 17-year-old American up to 4th on the Jeep Leaderboard.

“It’s been an unreal event,” said Marks. “Thank’s to all the fans and congratulations to Jeremy, Italo and Carissa, it’s been such an incredible event and thank’s everyone from Roxy for their awesome support. I’m super stoked.”

In a crucial heat for the 2019 women’s World Title race, rankings leader Moore took on World No. 2 Lakey Peterson (USA) in Semifinal 1 earlier this afternoon. Their heat was the last one surfed on the outside walls of La Nord and Moore’s power turns and brilliant carving game did the job while Peterson couldn’t really find any high scoring potential waves, eventually placing equal 3rd.

Event favorite Johanne Defay (FRA) was forced out right before the Final in the second Semi, unable to replicate the deep tubes she found at La Graviere earlier this week. Marks got the better turns in the critical sections to eliminate the Reunion Island surfer in Equal 3rd.

In the men’s Semis, local hero Flores put on an absolute clinic in the first Semi and gave Jack Freestone (AUS) no room to breathe as he threaded the deep tubes to post an incredible 16.33 total. The Australian did post his season-best result with Equal 3rd in France.

In the second Semi, Leonardo Fioravanti (ITA) got his incredible return from injury campaign stopped by Ferreira. The Italian reached the Semis for the first time in his young career and will carry huge confidence into the remaining events of 2019.

The day’s biggest upset was the current Jeep Yellow Jersey Gabriel Medina (BRA)’s elimination in the Round of 16 this morning, the Brasilian’s worst-ever result in France, an event he’s won three times and made the Final five times. The Brasilian still retains the rankings lead heading into Portugal and Hawaii, two events he has won in the past as well.