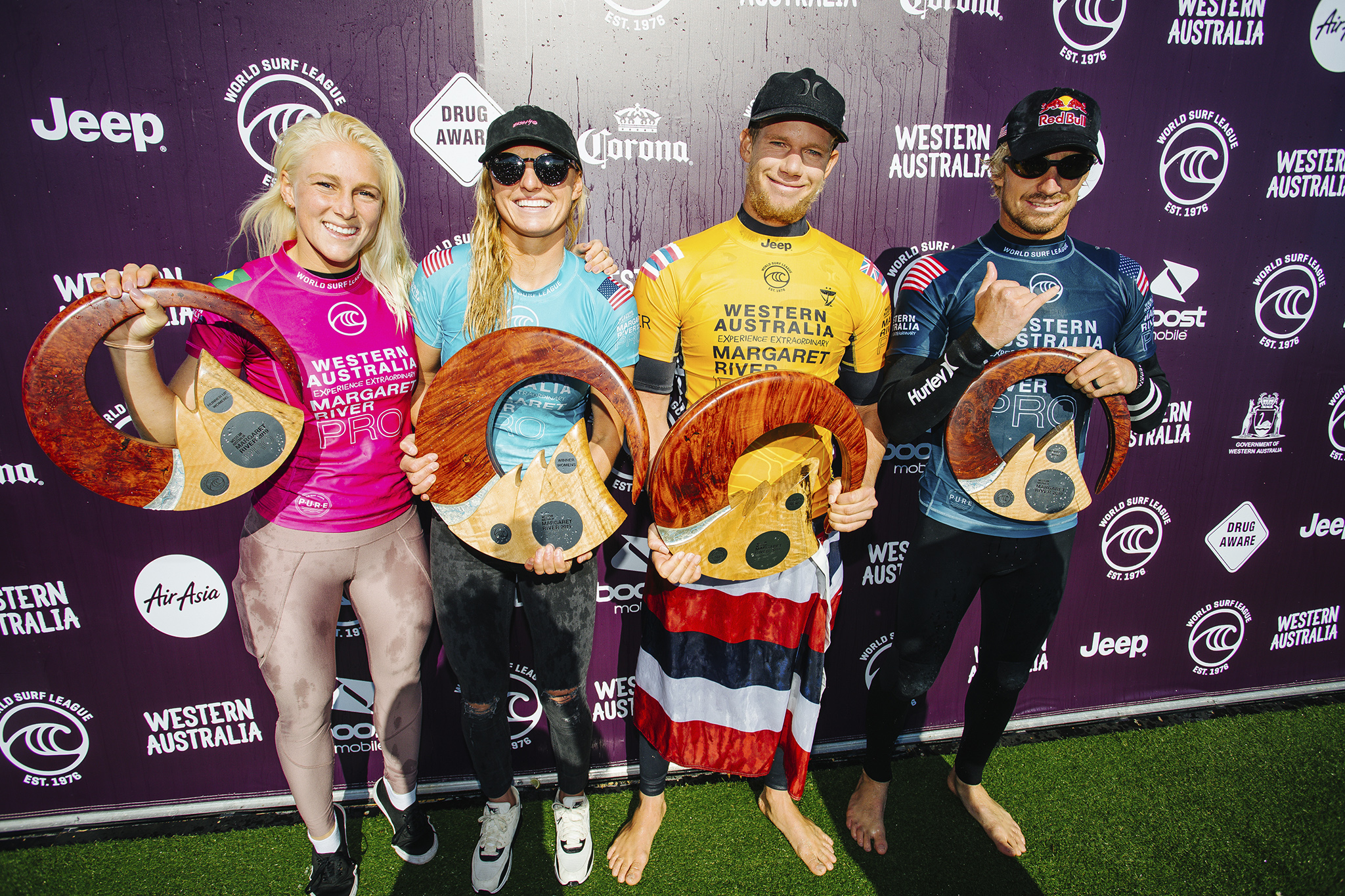 With the first four stops of the season complete, the 2019 World Title race is starting to take shape heading into the year’s halfway mark, the Oi Rio Pro. The 2019 CT rankings will not only decide the year’s World Champions but will also determine the first 18 qualifiers into the Olympic Games Tokyo 2020, where surfing will make its Olympic debut. Florence currently leads the rankings on the men’s Jeep Leaderboard and Peterson is gaining momentum with a move up to World No. 6. 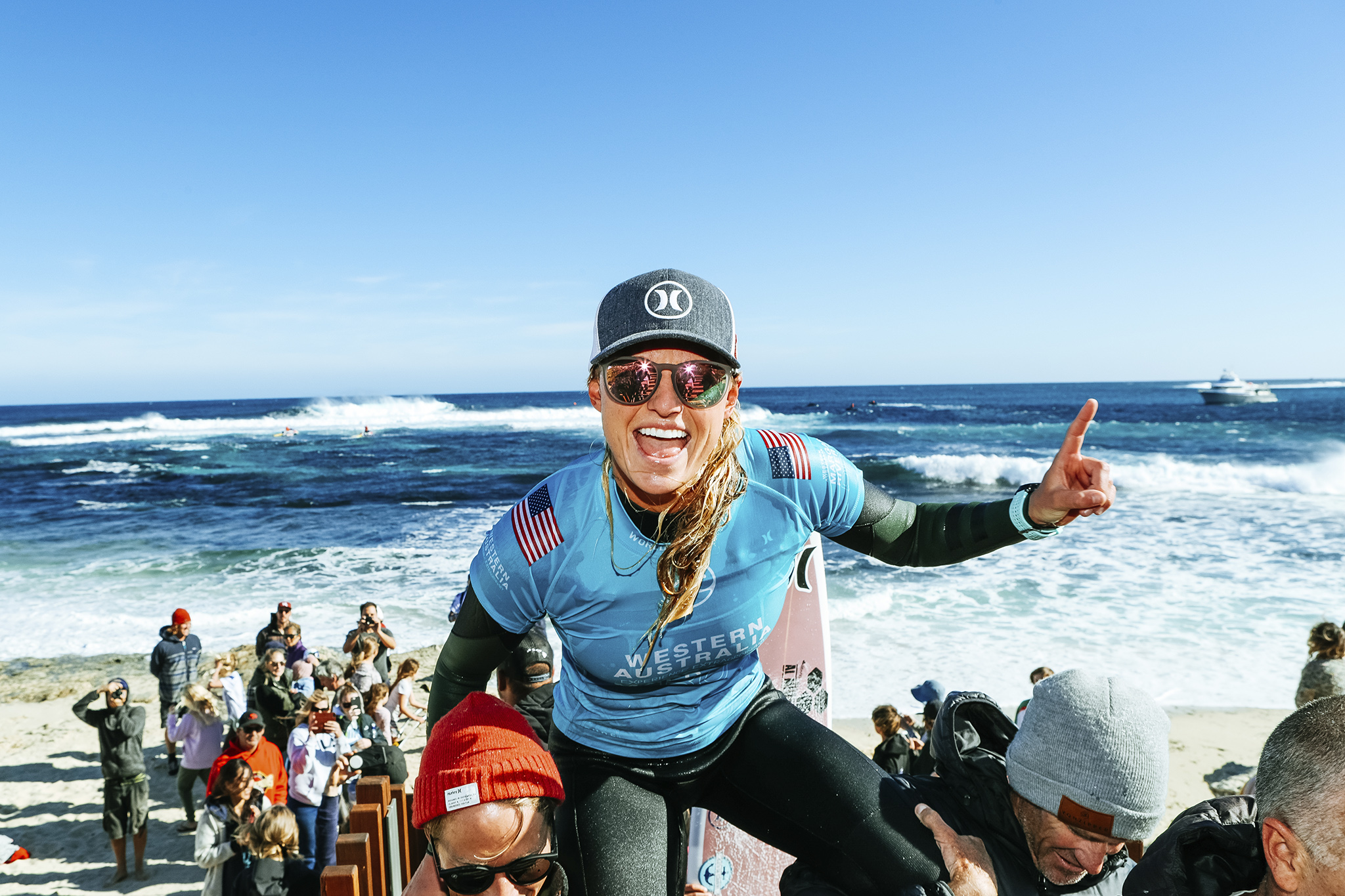 Peterson Jumps Back Into World Title and Olympic Qualification Contention
Peterson’s dominating performance comes at no surprise after her hard-fought World Title battle with Stephanie Gilmore (AUS) last year. Unfortunately for Peterson, the results did not go her way and she fell short of her maiden World Title, while Gilmore earned her seventh. After a slow start to her campaign this season, the American’s victory vaults her back on track to win her first World Title and to qualify for the Olympic Games Tokyo 2020.

“This event has been a hard one for me to overcome,” Peterson said. “I was so stoked that we waited for today and got some decent swell for the Finals. It was super windy, which made it tricky but that’s all a part of this place and it makes the win even sweeter. After beating Stephanie (Gilmore) and Carissa (Moore) and making it through the Quarterfinals, I found some extra momentum and fire and had definitely figured it out at Main Break. It’s been such an amazing event. Everyone has been surfing so well, especially in the Final. Tatiana (Weston-Webb) was surfing so well so a big congratulations to her.” 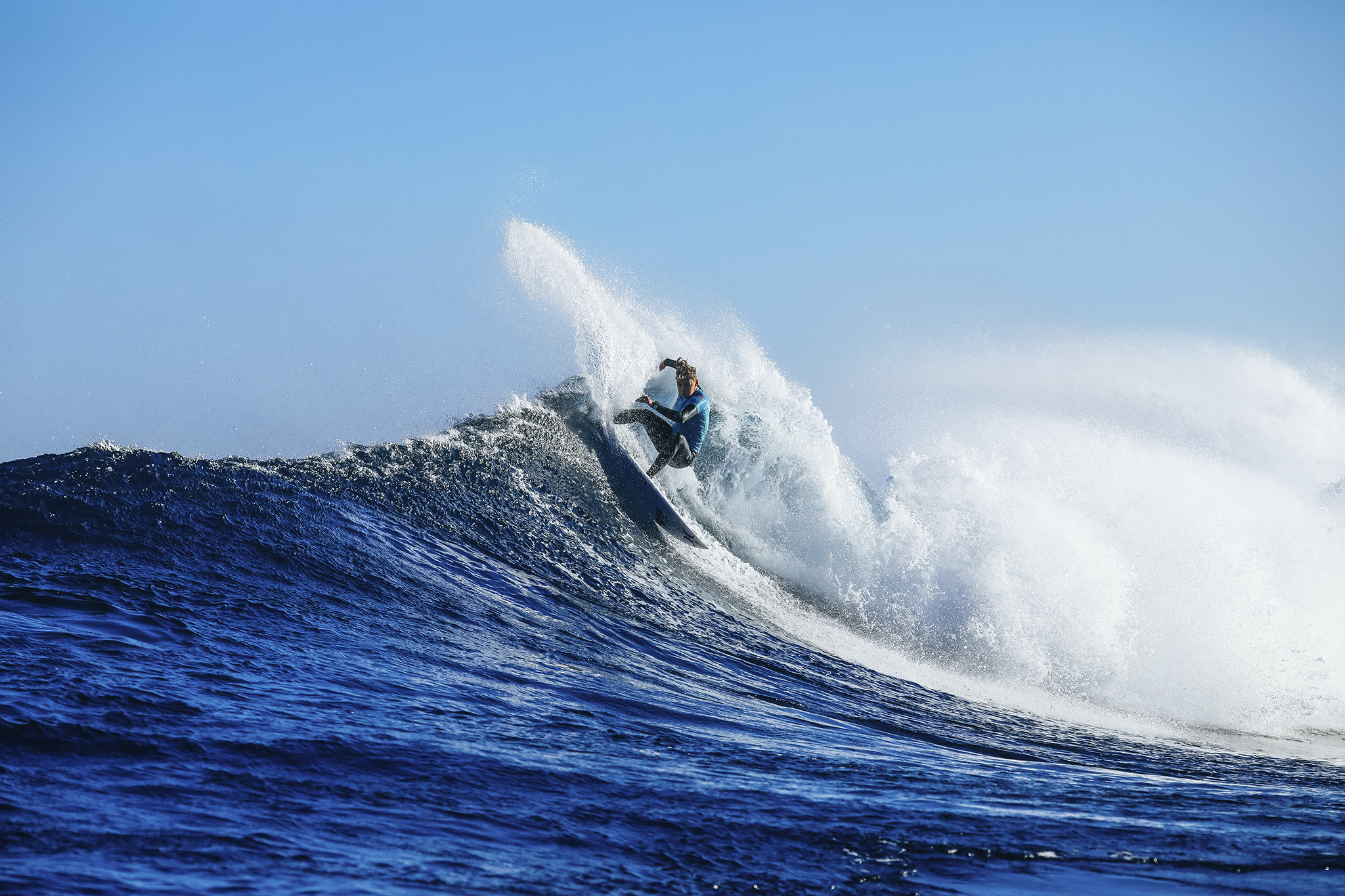 The win puts Peterson’s winning tally up to four CT victories and marks her first victory in Western Australia. In sizeable Main Break conditions, the 24-year-old out-shone opponents Weston-Webb in the Final, three-time WSL Champion Carissa Moore (HAW) in the Semifinals, and Gilmore in the Quarterfinals. Her performance also set the bar with the highest heat total of the season so far, an excellent 18.83 (out of a possible 10).

“After a rough start to the season, the Olympic qualification has definitely been on my mind,” continued Peterson. “I just need to have fun and enjoy myself because if I get too caught up in past results, it can hinder me a bit. My goal right now is to do my best and have fun with my surfing.” 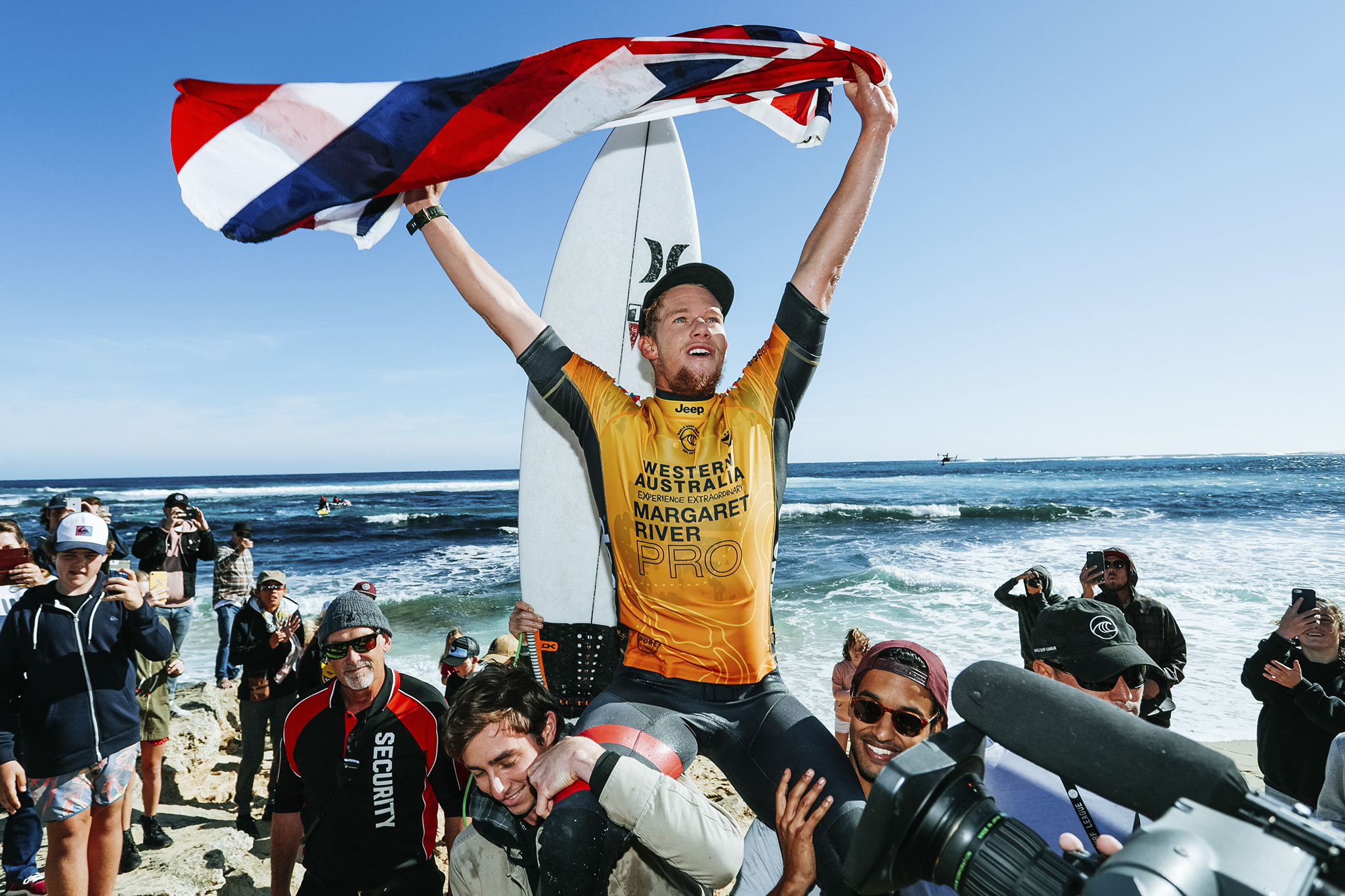 Florence Wins Second Event Title, Furthers Lead on World Rankings
Florence’s success secures his hold at World No. 1, which he has maintained since winning the Rip Curl Pro Bells Beach earlier this year. The two-time WSL Champion, and now two-time event winner, increases his lead over the men’s field with event runner-up Andino in second (5,740 points behind) and Italo Ferreira (BRA) in third (6,595 points behind). This is Florence’s seventh CT victory and second this season after returning from a knee injury that kept him sidelined from a majority of the 2018 season.

“I’m super stoked to win in Margaret River again,” Florence said. “Brother (Kolohe Andino) was pushing me super hard in that heat and it was pretty nerve-racking in those last 12 minutes because it got really slow out there, so I knew I had to pick the perfect wave. Kolohe is scary to surf against in waves like this. That was our second Final out here and he is always such a threat.”

Florence now has three wins in West Australia after today with the first being in 2012 when the event was on the Qualifying Series and a CT win in 2017. The 26-year-old has a close affinity with the South West of Western Australia as evidenced with his iconic free-surfing sections and has used the array of powerful waves to produce some of surfing’s most mind-boggling video parts of the last decade.

“I really love coming here to Margaret River,” continued Florence. “It really reminds me of home in Hawaii. There are so many different waves and lots of power and it’s just a beautiful place to come. I’ve always enjoyed coming here since the first time I competed here when it was a Qualifying Series event and I’m stoked to be back. I can’t even believe where I am at this point of the year, it’s pretty crazy for me. There was a lot of mental and physical stuff to go through after the injury so I’m just stoked to be back surfing and competing.” 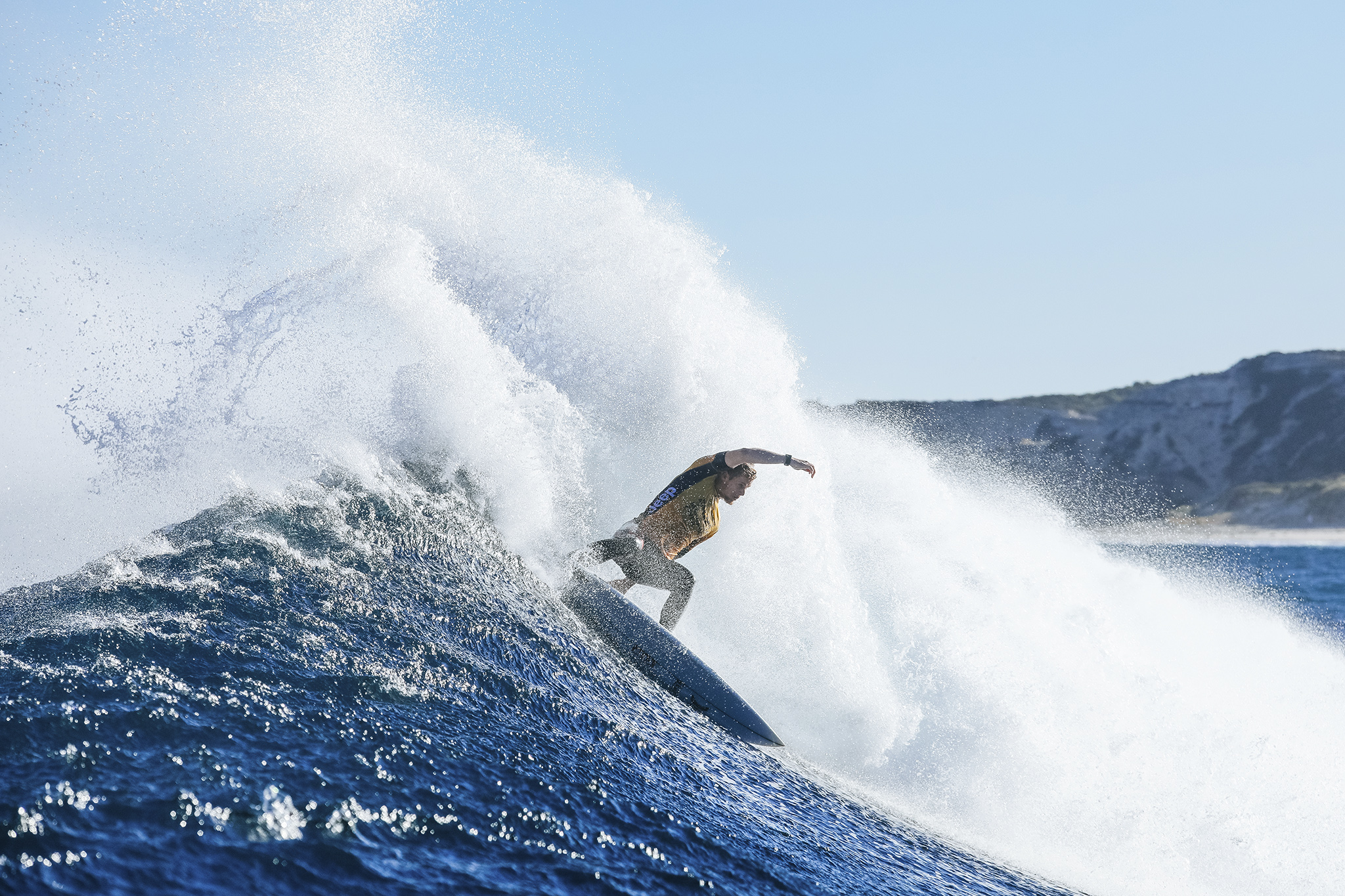 Unlike fellow Californian Peterson, Andino fell short of clinching victory at Margaret River. In what was the fifth CT Finals appearance of his career and second for 2019, Andino went wave-for-wave with good friend Florence until the last few minutes when Florence used priority and posted a near perfect 9.50 to put Andino out of the running. Although Andino’s maiden CT victory will continue to elude him, he has consolidated the second spot on the Jeep Rankings and puts himself firmly in the World Title conversation for 2019.

“There is no one I’d rather lose to than John (Florence) because I look up to him and his surfing so much,” Andino said. “When the waves get harder and bigger and windier like this John John is always the hardest guy to beat. As we all saw he was demolishing Main Break this week and then obviously won at Bells when it got really big and windy, so he is definitely the guy to beat when it gets like this. I was happy to share another Final with him and am happy to continue this awesome start to the year for me. It’s funny because I guess John is sitting in the No. 1 spot and I’m at No. 2 and we are heading to Brasil and staying together so that will be really fun.” 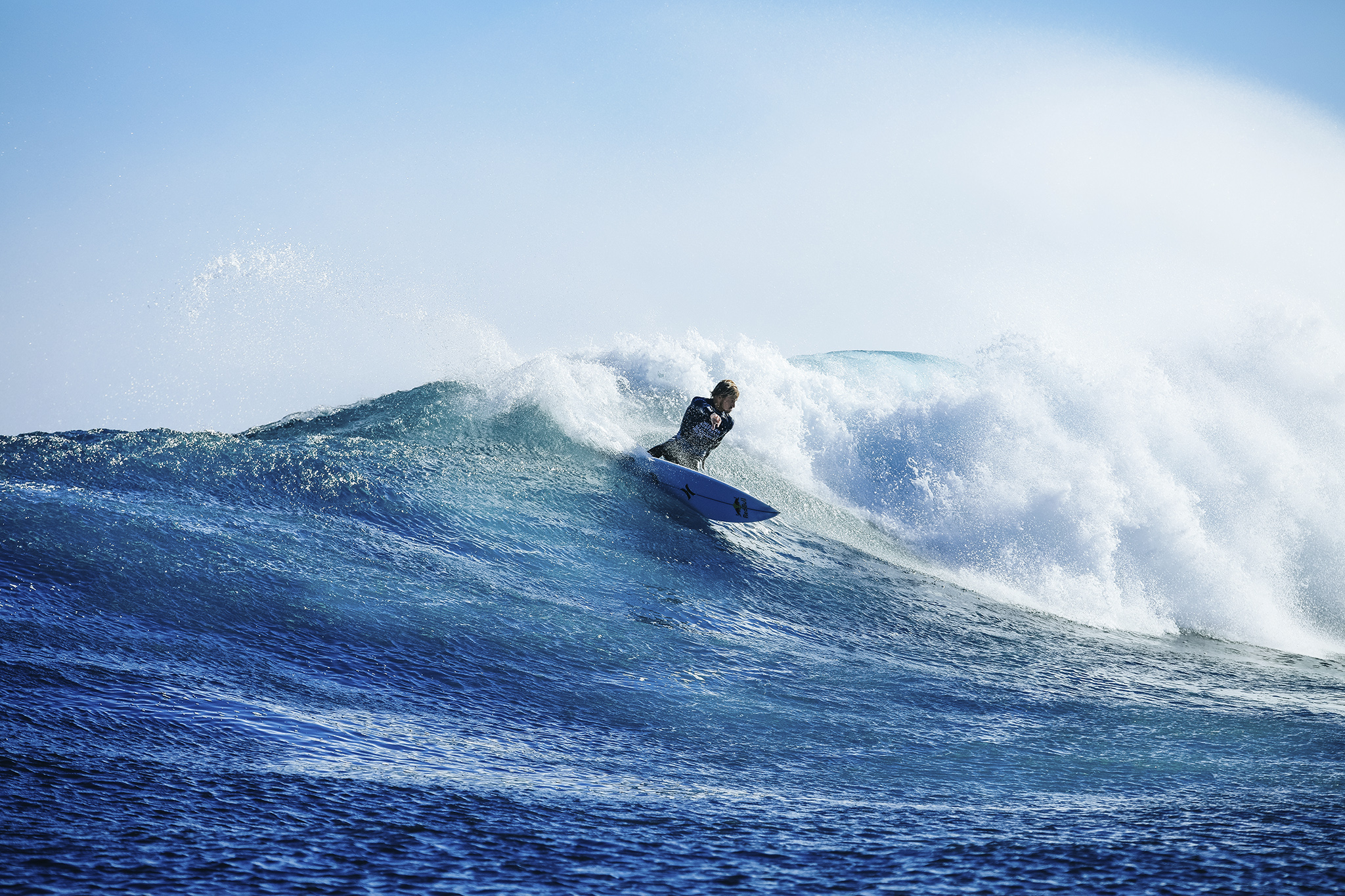 Similarly to Peterson, Weston-Webb hadn’t started 2019 the way that would be expected of her, coming into Margaret River with two ninths and a fifth-place result. The 2015 CT Rookie of Year was one of the form surfers of this year’s event with her powerful backhand surfing matching the open walls of Main Break. Weston-Webb fell on a couple of her scoring waves, which brought her short of the required score in her seventh CT Finals appearance. Weston-Webb moves up one spot to World No. 9 on the Jeep Leaderboard and will now shift her attention to the Oi Rio Pro, in her home country of Brasil.

“I’m definitely really stoked with my result here,” Weston-Webb said. “I think I was making things too complicated in my mind for the first three events. For this event, I just took it easy and took a lot of the pressure off. It seemed to work as I kept making heats and made it to the Final. I am really happy still and want to keep building momentum. It was great to come back to West Aus. It’s naturally beautiful and has great waves, so it’s good to be back. Now we head to Brasil, which I’m really excited about. I have a lot of things on and a lot of support so it’s definitely one of my favorite events to head too.” 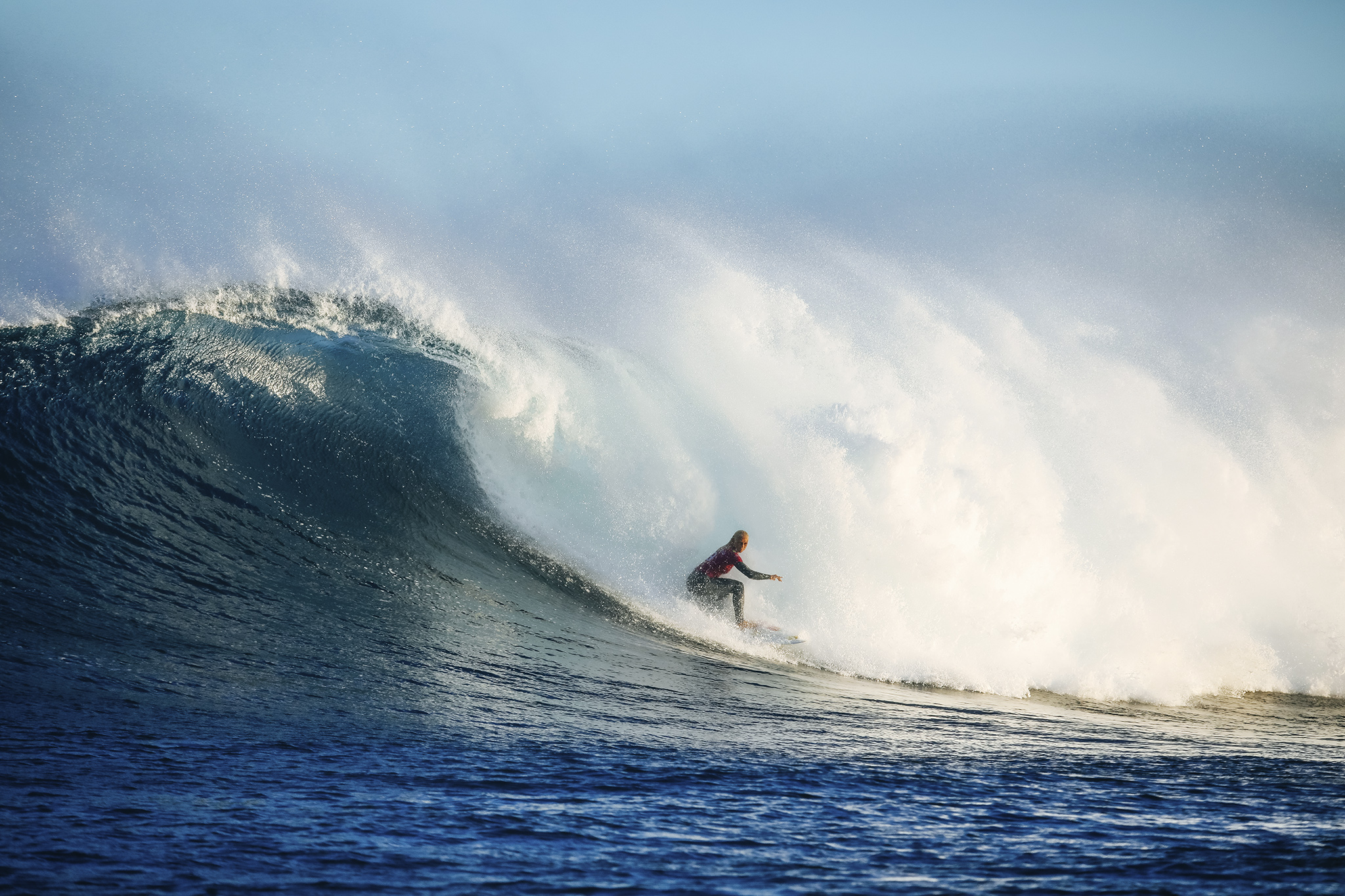 Sally Fitzgibbons (AUS), 2017 Margaret Pro winner, fell to Weston-Webb in the first heat of the morning. Fitzgibbons held the lead for the majority of the 35-minute Semifinal until Weston-Webb’s buzzer-beater ride turned the heat. Fitzgibbons exits in third, a strong result to go with her runner-up finish on the Gold Coast and two Quarterfinal exits at Bells and Bali.

Carissa Moore (HAW), three-time WSL Champion and two-time event winner, was ousted by Peterson in the second Semifinal. A close battle saw both surfers hitting the excellent range with Moore’s 7.60 and 8.20, but Peterson narrowly advanced with just a 0.17-point advantage.

Julian Wilson (AUS) missed out on his first Final of 2019 with a loss to Andino in the second Semifinal. Despite the loss, the 3rd place finish is the Australian’s best result of the year after two 17th places on the Gold Coast and Bells, and 9th place in Bali.

Injury replacement Caio Ibelli (BRA) blitzed through the 2019 Margaret River Pro, taking down surfing’s biggest names on the way. Ibelli lost to eventual winner Florence in the first men’s Semifinal, falling just five-tenths of a point shy on his final ride. In the first four events, Ibelli was the substitute for the injured Adriano de Souza (BRA). De Souza is scheduled to return to full-time competition at the next event, the Oi Rio Pro, and now Ibelli will be on call if Leonardo Fioravanti (ITA), who suffered a shoulder injury at the Box ahead of this event’s Round of 32, is unable to return to competition.