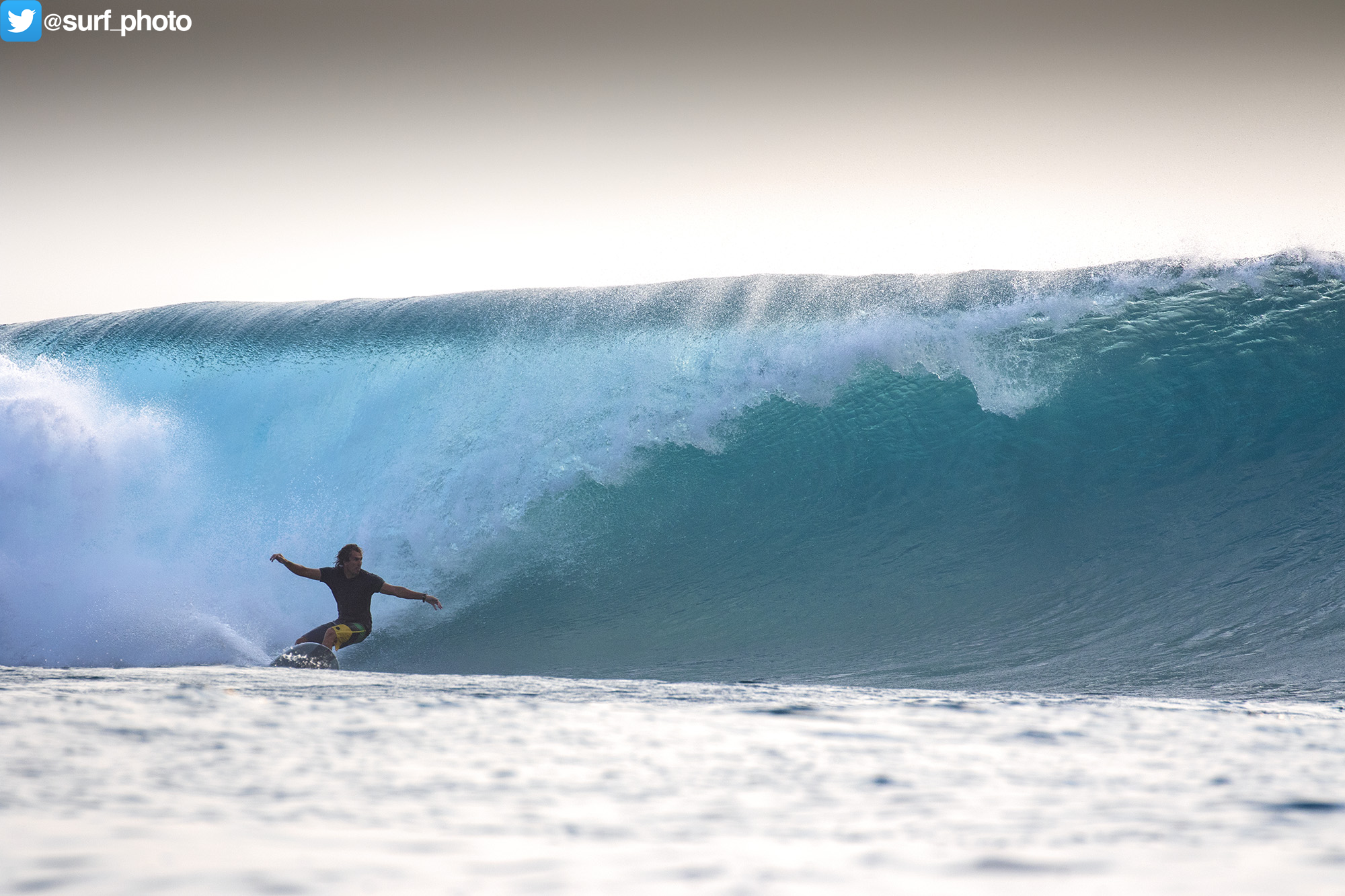 Adam Griffiths is an affable gent. He’s one of the leading lights in the ferociously strong British longboard scene and just an all round bloody good bloke. It was a pleasure to share the Indonesian trip (featured in issue 165) with him. Longboarders and barrels aren’t that common a combo so it was fascinating to watch him park his nine-footer in some tropical caverns. Seeing as he scored so many epic photos which we couldn’t fit in that issue we caught up with him for a chat about where he’s at and where he’s going… 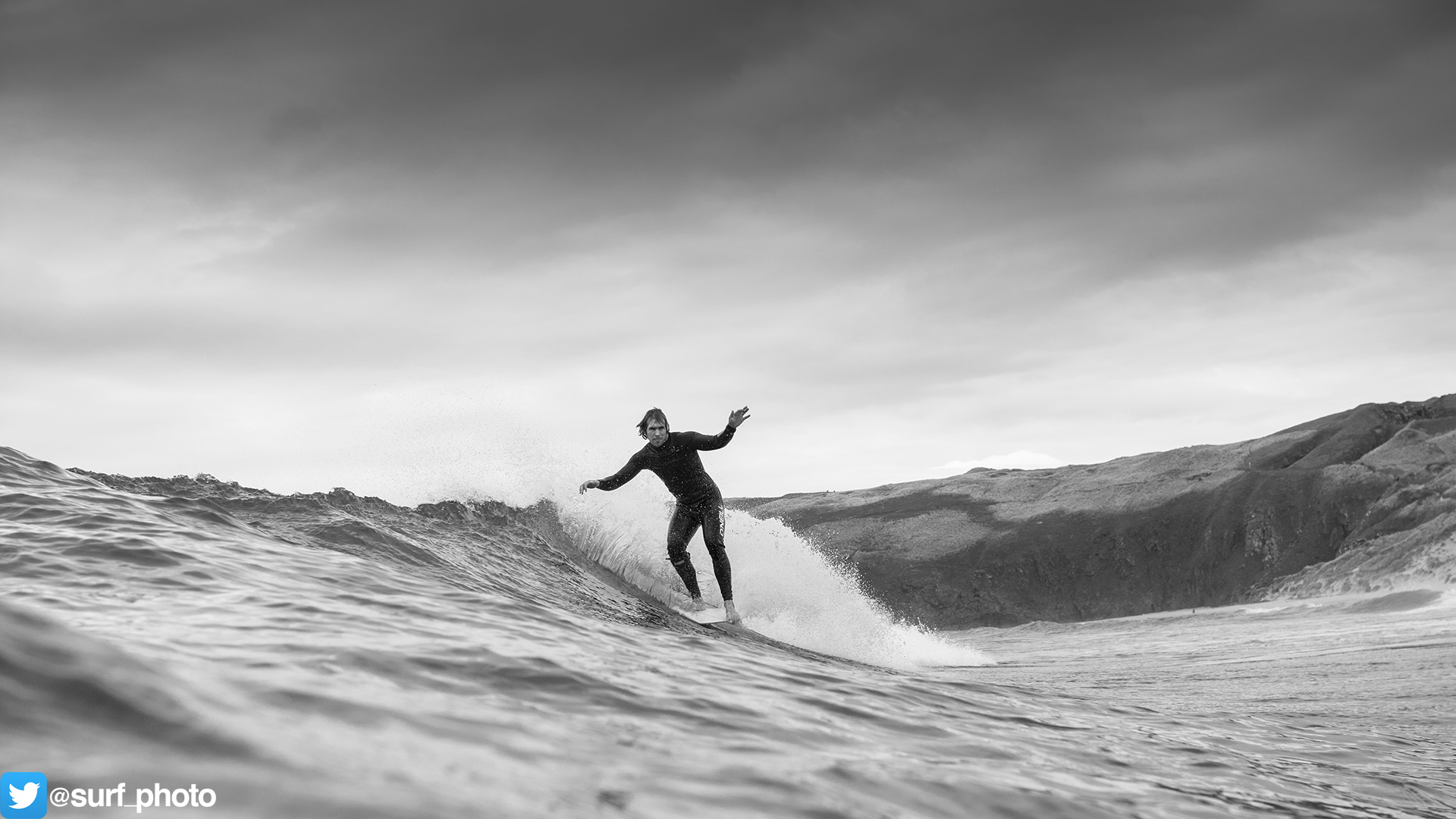 How did you start surfing?

I grew up in Devon but not that close to the sea. I’m from Totnes so about an hour from Bantham. My parents took me to France a fair bit when I was a nipper so I did a lot of bodyboarding and I dabbled in whitewater kayaking. So I’ve always loved being in the water and doing any water activity. I jumped on my mum’s longboard in France when I was twelve and that was it, I was hooked. Didn’t want to get back in a kayak or on a bodyboard after that. However you start you’re getting ocean knowledge no matter what the craft. A lot of the greats started out on lids, even Slater. You just transfer that knowledge when you start standing up.

Been a longboarder from the start?

I took a shortboard on my first big trip, that was a 6’10”! That was when I was 17. Went away with Butler, Boydell and crew. I’ve come down to 5’8”s and 6’2”s shortboards now depending on conditions. But yeah always loved the bigger boards.

Where did the Bearman nickname come from? It’s not like you can ever pick your own.

It was from that first trip, Jim Bergin, Timmy Boydell and Tom. It started as, ‘Bear likes juice!’ and evolved into Bearman. Mainly because I was a big, hairy teenager. It’s definitely better than my secondary school one: Shrek! (laughs) It works. I’ll take it. It could be worse.

How did you end up in Newquay?

I started competing doing the BLUs with Minnow so was down here a lot. My Dad used to live here when he was in his twenties and my parents were up for moving so it just made sense. When I finished my GCSEs we all came down to be by the sea and been here ever since.

It’s really strong. You’ve obviously got Skindog leading the charge for years: eleven times European champion. When I started there was Lee Ryan and Chris ‘Guts’ Griffiths, they were a big influence. Elliot Dudley, Sam Bleakley we’ve got some amazing surfers and longboarders. It’s in a really good place right now. 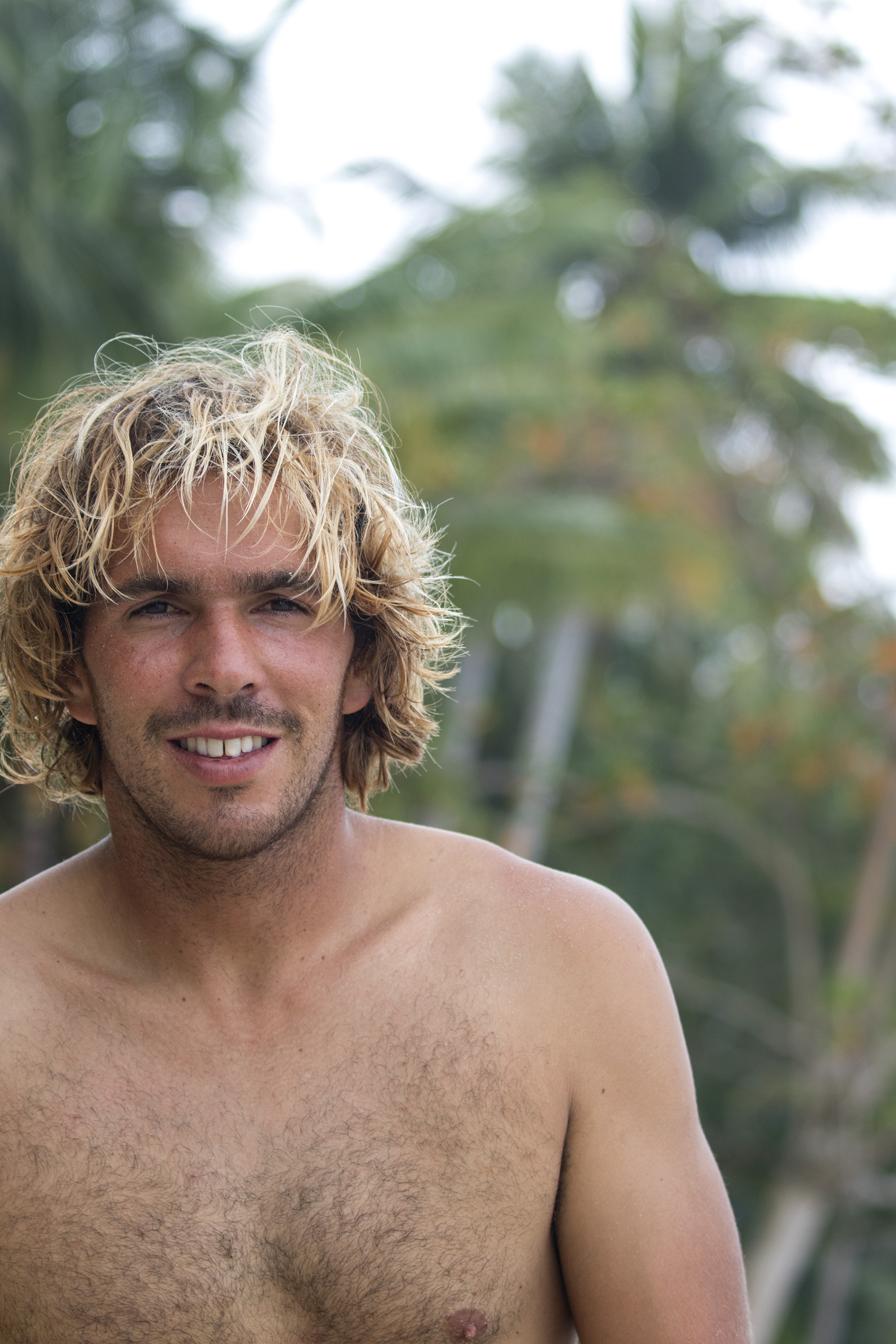 How do we compare to Europe?

It’s us and the French. We’re the two major forces. The Spanish and Portuguese are playing catch up. On the world tour last year Europe had the biggest majority of surfers on the tour.

What’s the deal with the longboard world title?

It’s all about the China event. We compete in Europe to get to it. The top two from Europe qualify for the world longboard tour. There’s 19 that qualify from the previous years ranking and the other 19 qualify from the regions. Then some wildcards.

Is everyone happy with it being in China?

It’s been fun, but it’s the fourth year we’ve done it so a bit of variety would be good. It’s quite a small place with only two restaurants so the foods not all that … It’s better here! 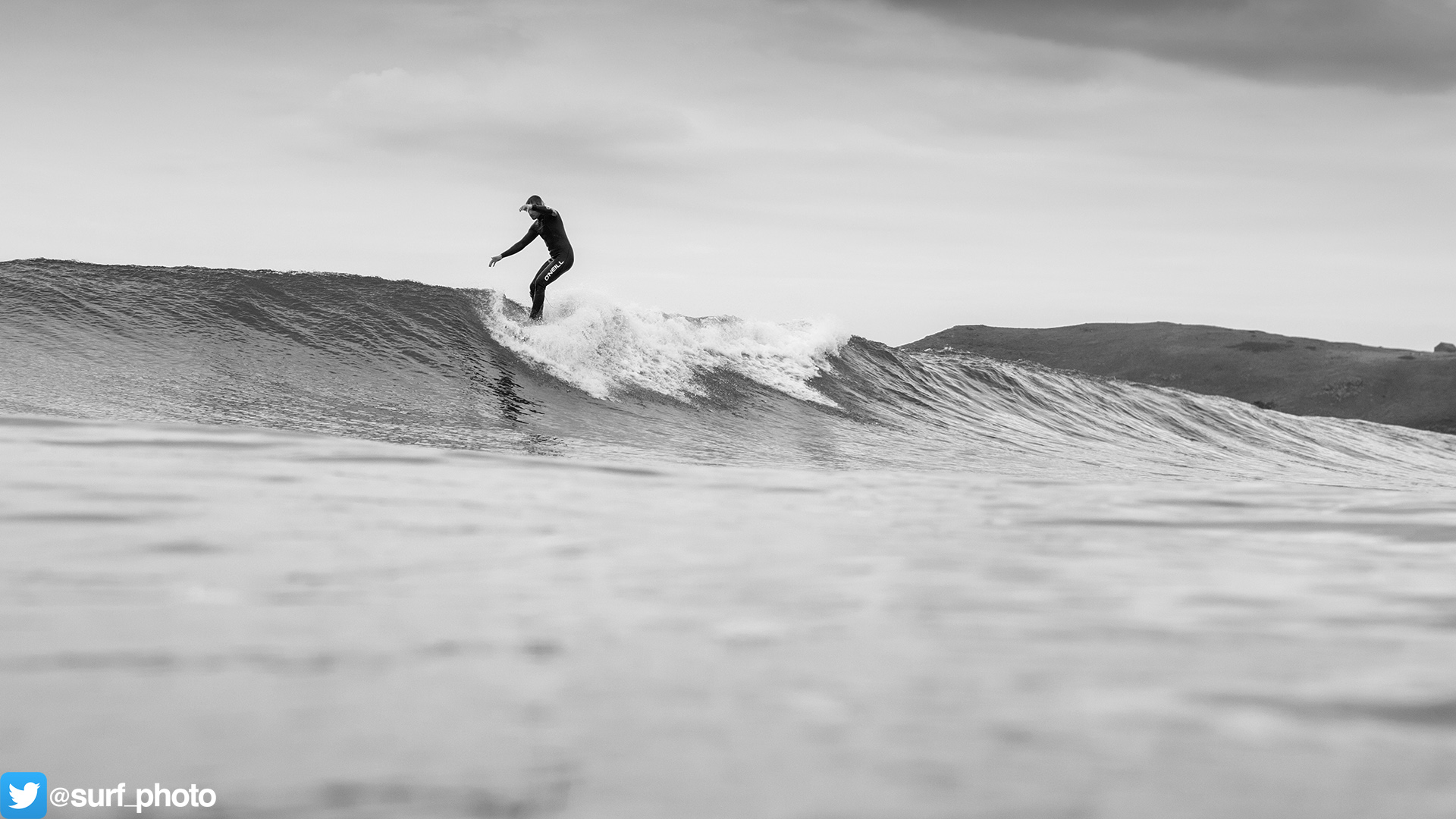 Going back to the Indo trip: getting barrelled on a longboard doesn’t seem like the easiest thing in the world to do?

Sometimes I shy away from it and jump on my shortboard as it’s way easier and I know I’m not going to snap my board. But I set myself some goals this year and got a specific barrel board made for riding tubes. Real strong epoxy quad and a 2+1. When I took it out in Indo it was actually easier than my shortboard. I could get into the waves earlier, I was up and setting my line, as opposed to a shortboard where you’ve got to drop, get to the bottom and pull up into it. If you’ve got the right board and are willing to go it’s not so bad! Once you get past the thought of it.

Where do you stand on the trad/progressive thing when it comes to boards?

I like riding everything really. Pick the right board for the conditions. If it’s one-foot nice peelers or a point break then a log all the way. If it’s bigger or windy the traditional log doesn’t work so well at which point I’d rather be on my performance board.

Do you think there’s any solution to the competitive split between the two cultures?

There was a King of the Longboard event last year over a weekend. Two heats on a log, two heats on a performance board and they added it together for an overall winner. Longboarders can ride both they just have a preference. That worked quite well. The dream would be a proper tour with two or three stops so there’s events that suit certain boards and it doesn’t all come down to one event at one spot that favours certain riders. It seems like the WSL is moving forward, I think we’ve got a webcast this year which we’ve not had before and Jeep/GoPro are sponsoring it. Which is a step in the right direction.
People can relate to longboarding, very few people surf a 6’0” by 18” at eight-foot Pipeline, what we do is achievable which is why the clips of us seem so popular. (A one-wave clip of Bearman at Fistral shot by Sharpy has been seen 274,000 times on the Carve Facebook page for instance.Ed) It’s like big wave surfing it’s more apparent what’s going on to the mainstream viewer. It’s relatable.

What you doing this winter?

Buying a house. Boring! So Ikea time for me. Getting a mortgage and all that. Going to Portugal tomorrow for the Europeans then China for the Worlds after that. When I get back I’ll try and go hang with Tom Butler in Ireland for a month if the surfs looking good. First year in forever I’m not going tropical for the winter.

Going to take your longboard out at Mullaghmore?

Not sure about Mully! My goal is to surf some heavier waves on the longboard and do a film series over the next year if I can get the budget in place. I was in Ireland last week and the boys there want it so much, they live for it, when it’s super clean, paddleable and eight to ten foot it’s a beautiful wave. When it’s twenty-five foot, raining and gale force offshore it’s a different world. 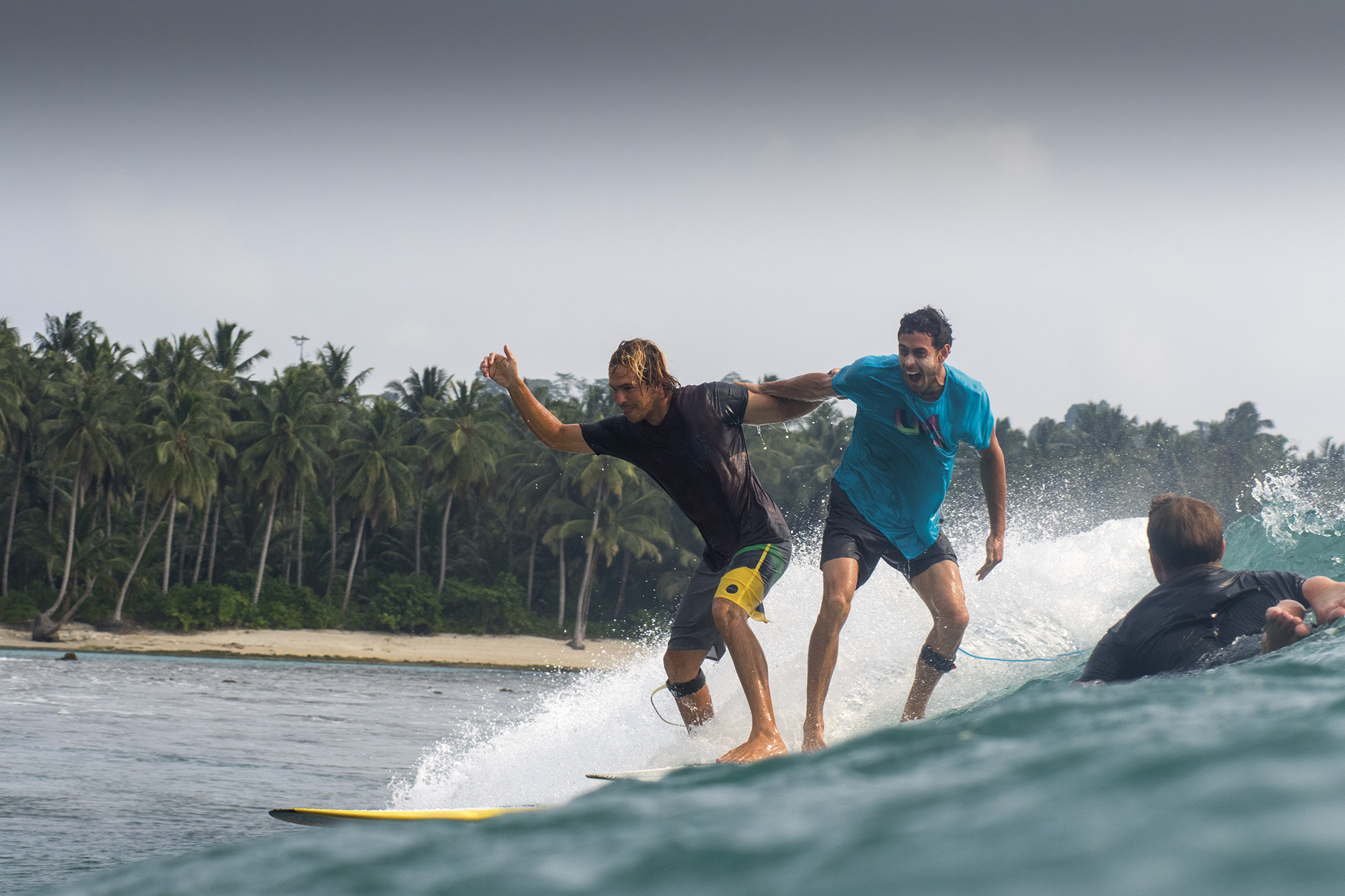 The longboard tandem thing you’ve pioneered going to be a new movement?

Not sure how it’s going to go down but it was fun with Buttsy going tandem in Indo. I look super serious and Tom looks like he’s having the time of his life. They’re funny photos. Thankfully there were no groin strains involved.

One big question for longboarders: how the hell do you get your board-bag on a plane?

They take up to 277cm. Most boards are 270cm. You need a close tolerance bag and fly with the right airlines. Always check before you fly. Touch wood I’ve never had any problems yet.

Thanks to Fourth Surfboards for everything, in particular the Mentawai trip was awesome. Skindog for making me the longboarder I am. That said it’s nice when you beat him, doesn’t happen very often, he’s the ultimate competitor, but it’s sweet when it happens. Holly my wife: can’t beat having a surfing wife. Just need to convince her surfing through winter is a good idea. Then of course my parents for always supporting me.