Who is Adam Amin?

The story behind the 19 year old from Sidmouth smashing the internet after paddling Jaws. 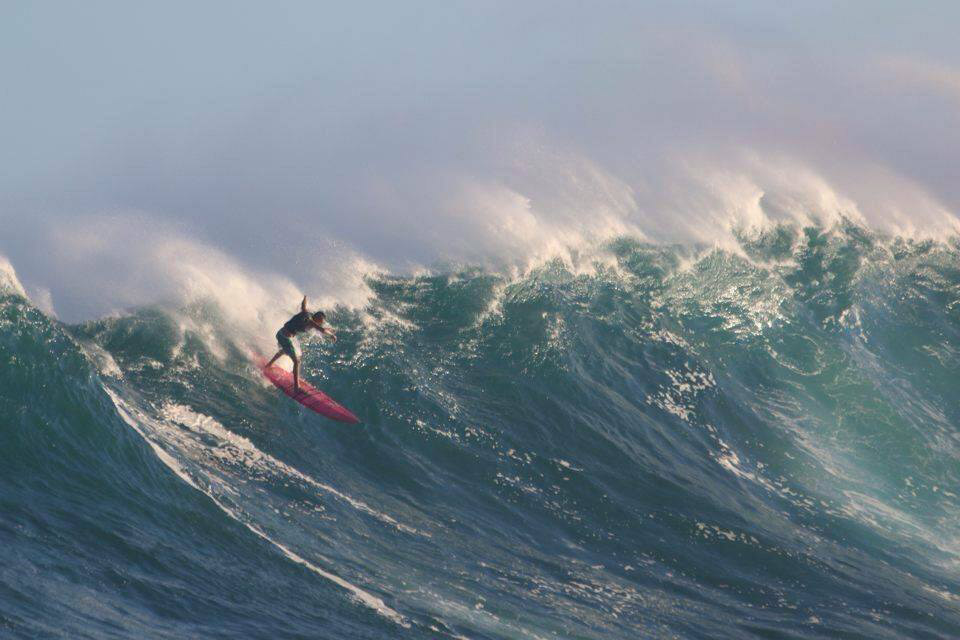 Adam Amin is just like most of the 19 year olds you might know, except he just caught the nations imagination for paddling out in 50 foot waves… He is still getting to grips with who he is and is at one moment outgoing, witty and charming and the next shy, introverted and awkward. If you met Adam you’d like him but you wouldn’t think ‘here’s a guy that would charge Jaws’ rather a polite, quiet young man with a bright future. But put him near the water and any uncertainty or teenage angst falls by the wayside and he becomes focussed, determined and driven. I always abide by the mantra that the best surfer out there is the one having most fun – this is annoying when you surf with Adam as he IS the best surfer out there and IS having the most fun. A few of us joke that when you surf with him you need a 500m exclusion zone because if he gets too close you suddenly stop getting waves! 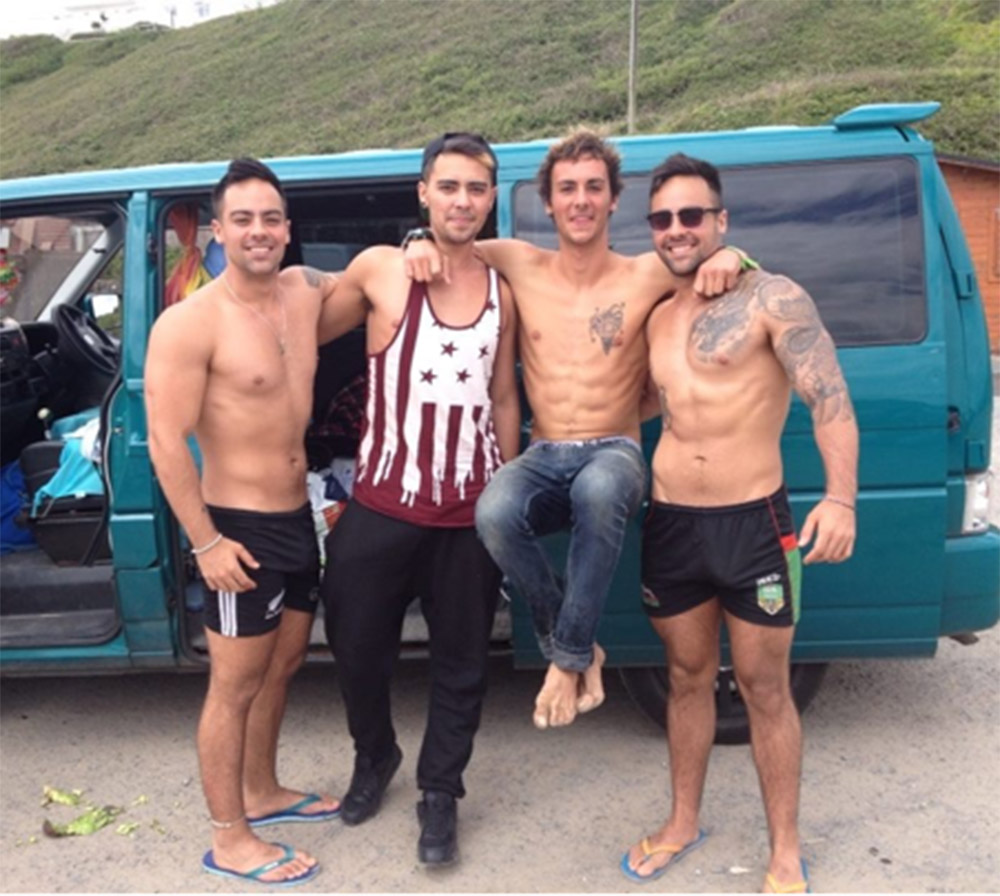 He was born in Exeter in 1996 as the youngest of 4 brothers (Faisal, Moody and Issa) and spent only 2 years in the UK before the family headed out to Bali. Immediately you’ll jump to the assumption that this is where he became the surfer we saw at Jaws on Sunday – not so. You’re now thinking ‘What a wasted opportunity!” and Adam would agree with you, to this day he regrets never surfing while some of the best waves broke around him.

Paradise didn’t last long – Helle Poulsen (Adam’s Mum) woke up one morning when Adam was five to find her family gone and the bank account cleared out – her husband had taken everything, including the kids, back to Saudi Arabia with him. What followed was a heroic struggle by a very determined woman to get her kids back and her family back on track. There’s a book (‘Reunited in the Desert’ by Helle Amin) and a Tesco Mum of the Year award on their mantelpiece at home that tell of her efforts. You can now see where Adam gets his grit, drive and determination from (I don’t use those words loosely)! As lovely as she is (and she is) you don’t ever want to be stared down by this lady. As you can imagine, as the youngest, this upheaval left Adam a bit damaged and vulnerable. 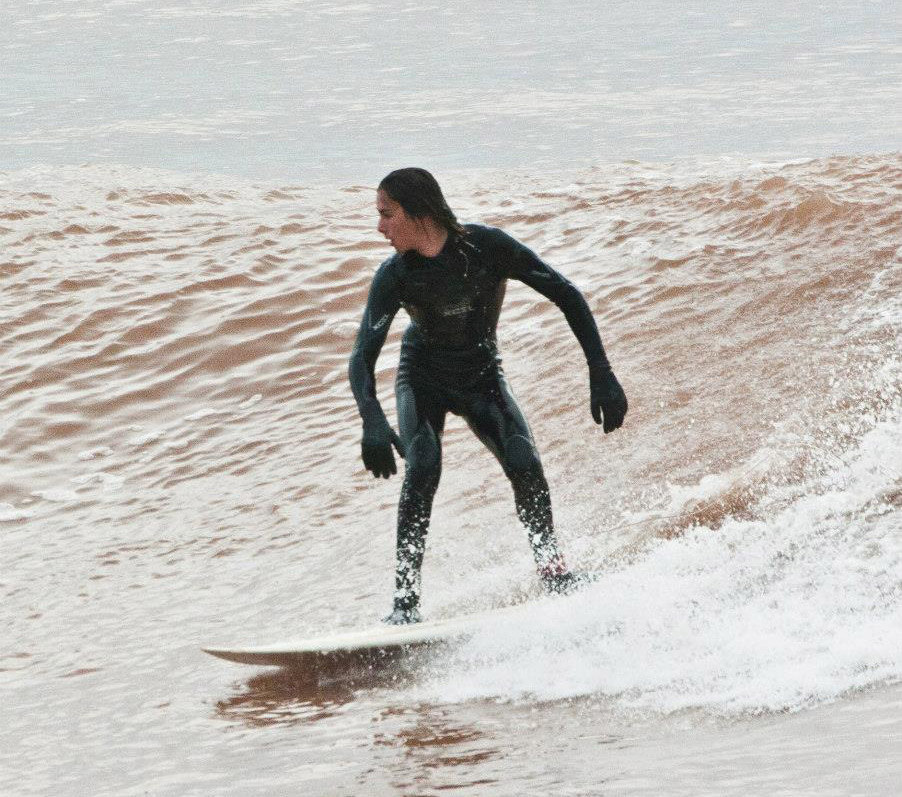 They managed to put this all behind them and Helle moved her family back to Devon and ended up in Sidmouth. Enter, stage left, Guy Russell who fell for Helle in a big way and became de-facto step-dad to 4 teenage boys. Guy is a waterman through and through: Coxswain on the local lifeboat, founder of Jurassic Paddle Sports, co-founder of Sidmouth Surf Life Saving Club and above all a gentleman. Adam at this point (hopefully he won’t mind me saying) was a bit of a lost soul, 13 years old and like most teenage boys would happily sit on the sofa eating his Mum out of house and home. Guy tried to introduce him to the joys of surfing and skateboarding and in good old teenage fashion he could take it or leave. Until, one day, he returned from a week’s adventure training trip with his school to North Devon. He walked in the house, “How was it Adam?” “Awesome we went surfing and I stood up”; the fire had started – Guy kept it stoked. An old board here, a wetsuit and pair of old boots there, Adam kept surfing. Like all the best surfers in the world he taught himself the hard way through sheer time in the water, determination and a passion to improve. Days where most of us wouldn’t take a second look at the sea, Adam would be in – not just an hour to say he’d been surfing but a five hour session, go home with mild hypothermia and eat everything in the house and say it was the best surf of his life.  Nothing has changed. He was the stereotypical super-grom – permanently stoked. 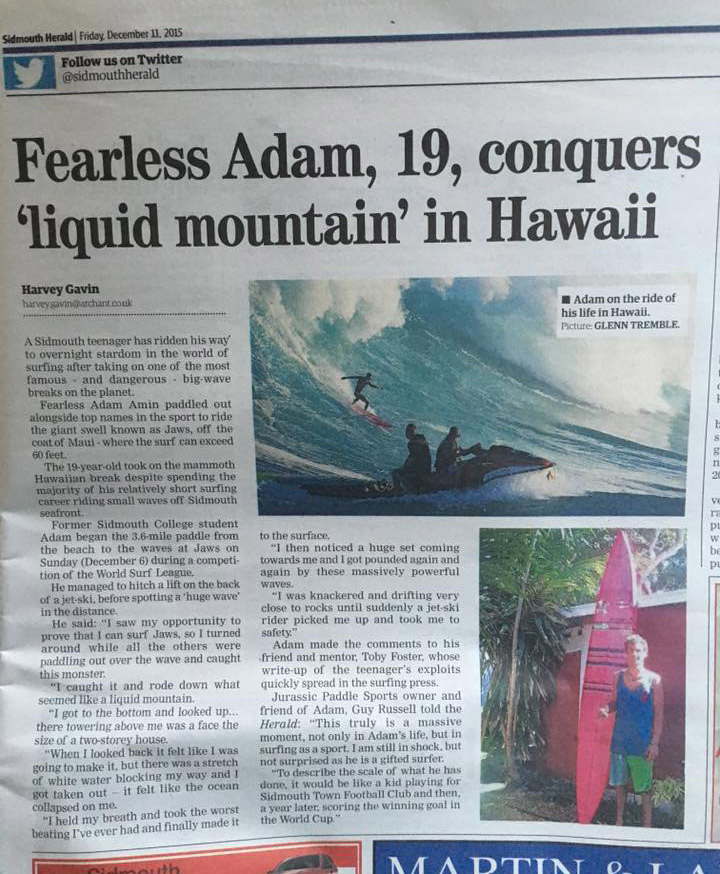 After a few years grafting in the brown slop of Sidmouth and a solo trip to France he moved out on his own to North Devon and stared working for Surfed Out in Braunton. After the summer season was over he popped home for a night to get his laundry sorted out and the next day flew out to Indonesia where he trekked to the far ends of Sumbawa for six months. When he came home (for one night – more laundry?) he casually showed the family some photos of him surfing, everyone was blown away, he was ripping, bottom turning on his back hand under the lip of grinding waves – it seemed that his surfing had come of age. 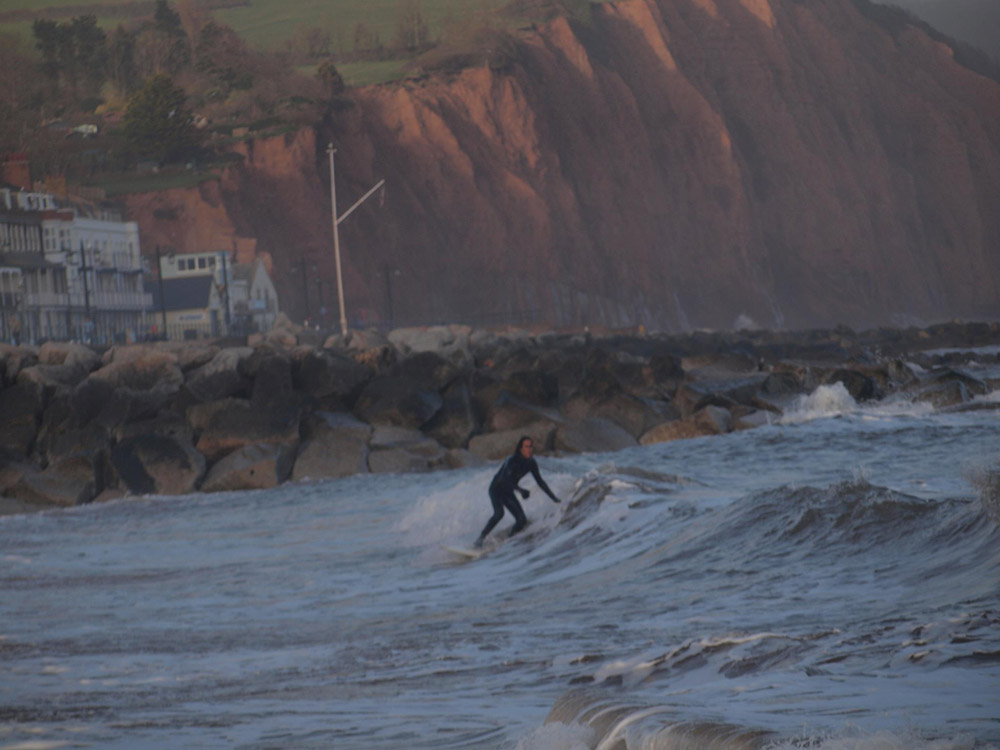 After another summer season back in North Devon (in a caravan) he unexpectedly appeared on Surfing GB’s Instagram page charging at Oysters – turns out that he had simply paddled out (alone) on a big day and paddled into some 20ft+ bombs and someone had caught it on their iPhone!  Totally uninterested in the coverage he finished work, packed up his caravan, bought a ticket to Maui, ordered a gun and told everyone that he was off to surf Jaws. His Mum was terrified! You’ve read the rest. 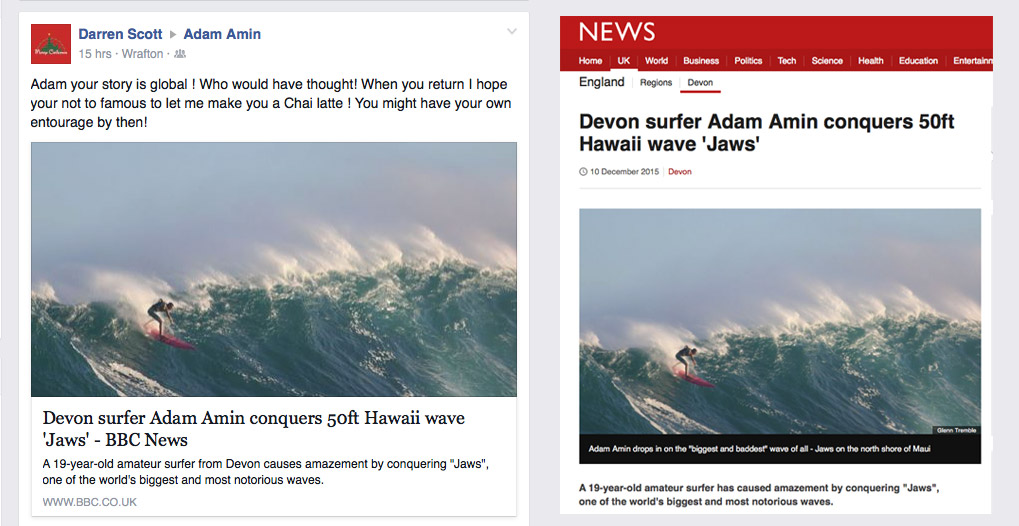 Life in Maui as a haole is tough (sort of – it is paradise after all); Adam works hard (from selling avocados scrumped from a nearby tree to landscaping), lives frugally and, of course, surfs. If you’re a surfer you’ll inevitably be asking yourself – can I do that? Having surfed in Maui (not Pe’ahi) and properly experienced the fear of a north shore close-out set I know I couldn’t. The easiest way to conquer fear is to train; knowing that when you enter the arena you’re prepared and have the skills and confidence of knowing you can cope – it doesn’t seem like Adam has done that which suggests something else is at play. Some of you might think what Adam did was reckless and put other people’s lives at risk but whether we like it or not whenever we enter the water there are selfless individuals standing by to risk their lives if things go wrong. If surfers never took risks would anyone be surfing these big waves – by any measure the first person to do something incredible becomes one person’s hero and another’s fool. I’m in the hero camp.

There is a crowdfunded set up to try and support Adams big wave dreams. 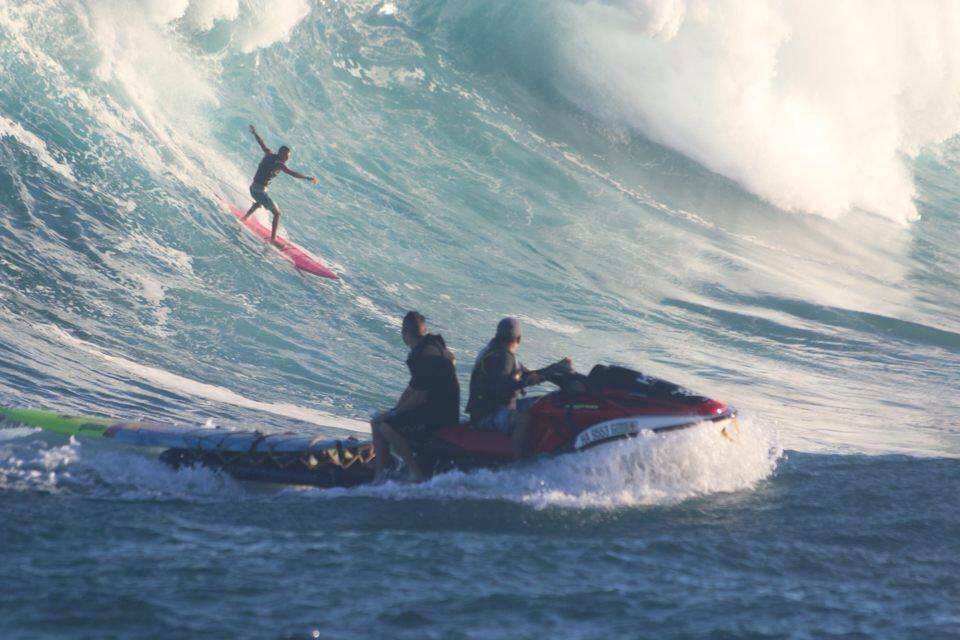 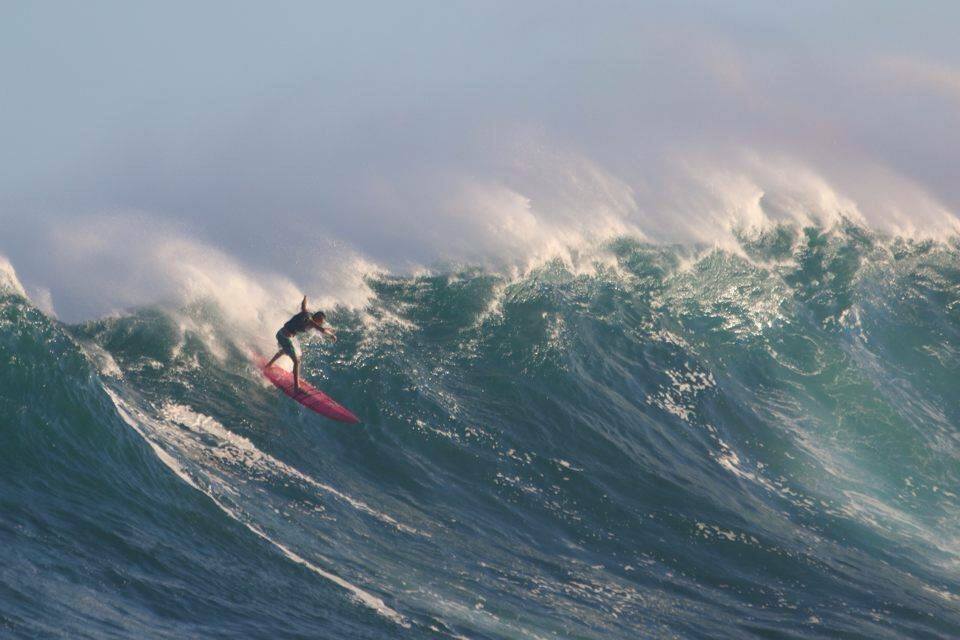 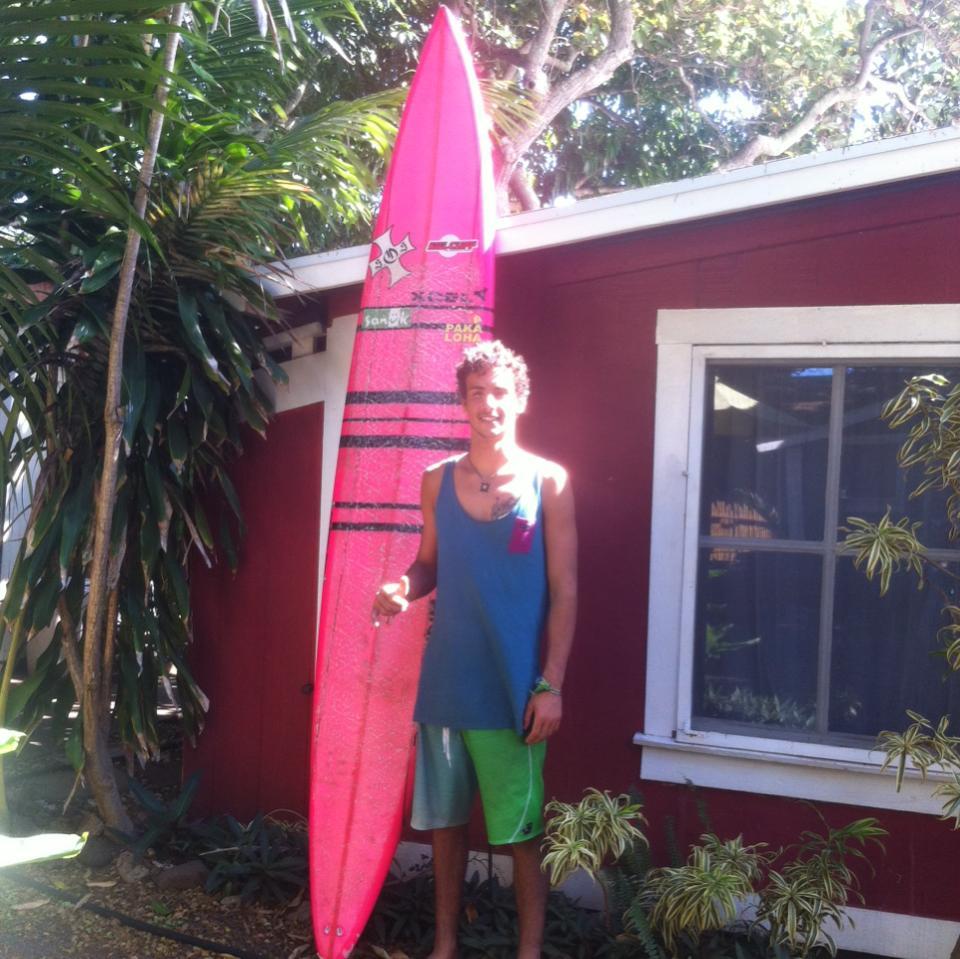