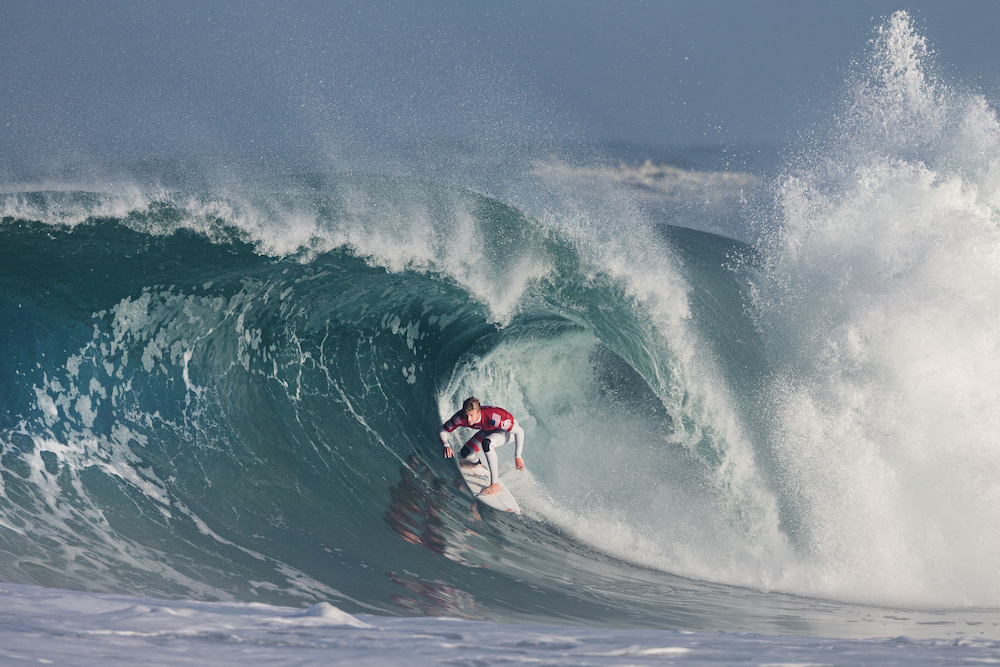 HOSSEGOR, FRANCE – OCTOBER 5: Kolohe Andino of the United States advances to Round 3 of the 2019 Quiksilver Pro France after winning Heat 1 of Round 2 at La Graviere on October 5, 2019 in Hossegor, France. (Photo by Laurent Masurel/WSL via Getty Images)

The Quiksilver Pro and Roxy Pro France, stop No. 8 and 9 on the women and men’s 2019 World Surf League (WSL) CT respectively, also continued earlier today with the completion of the Elimination Rounds. The event moved back to the main structure opposite the banks of La Nord and La Graviere and surfers took on powerful, hollow waves right on the sand just meters away from the fans who screamed and cheered them on loudly.

World No. 4 Kolohe Andino (USA) was the first surfer to lock into the powerful barrels of La Graviere this morning, scoring a 6.33 on his best effort to advance in first out of the elimination round and join Soli Bailey (AUS) in Round 3. Young French surfer Marco Mignot (FRA) got his fair share of tube time as well as he took the second qualifying spot, eliminating Jadson Andre (BRA) in equal 33rd who had to come in after he suffered a heavy wipeout. 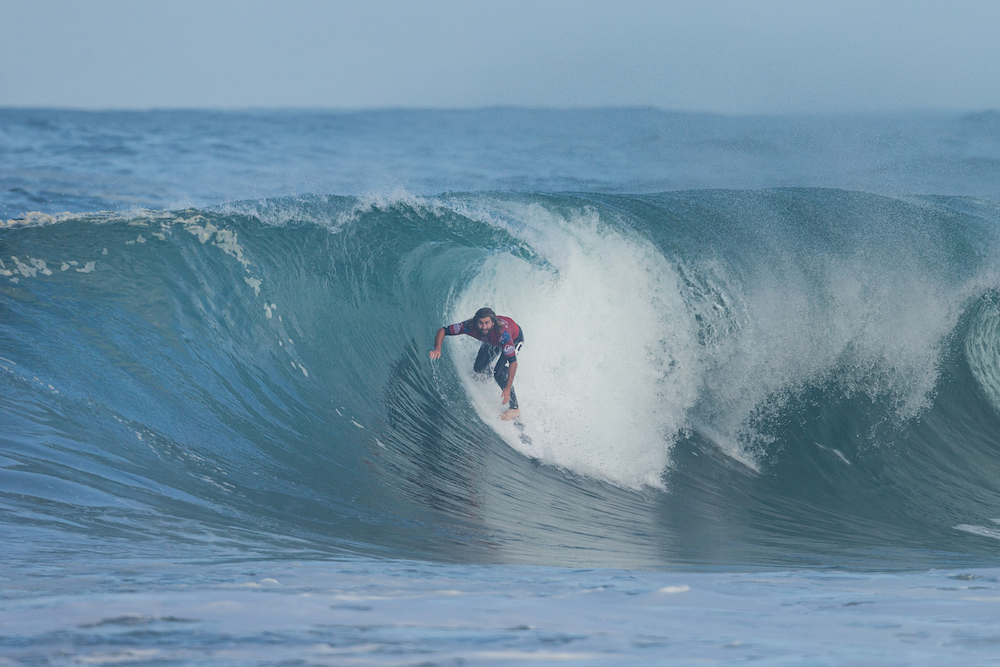 HOSSEGOR, FRANCE – OCTOBER 5: Wade Carmichael of Australia advances to Round 3 of the 2019 Quiksilver Pro France after placing second in Heat 4 of Round 2 at La Graviere on October 5, 2019 in Hossegor, France. (Photo by Laurent Masurel/WSL via Getty Images)

But the lineup really started to deliver for the second heat, in which local wildcard Marc Lacomare (FRA) posted a near-perfect 9.10 for a long and deep barrel on a solid left as he advanced into Round 3 alongside compatriot Michel Bourez (FRA), eliminating Sebastian Zietz (HAW) in the process.

“So much emotions today I’m super happy,” said Lacomare. “Conditions were really tricky and even though local knowledge may have helped, you really had to be lucky to be in the right spot out there. Getting a wildcard to compete against the best in the world at home is an incredible gift. I did well last time so hopefully I can repeat that and I hope the waves keep getting better and better.”

Soli Bailey (AUS) showcased his incredible barrel riding skills in the following heat as he slid right under the lip at take-off and navigated two long sections in the tube to post an excellent 8.17 for the win. The Australian rookie on the Championship Tour hasn’t made it out of Round 3 all season but the conditions in France could offer a turning point for the former winner of the Volcom Pipe Pro.

“This morning I was free surfing out there and it was super hard to find the right waves,” said Bailey. “I was jumping up and down this morning at the chance to surf La Graviere. Growing up as a kid watching this event, this is a dream, these are the sort of waves that I love surfing. It was a pleasure to surf out there, definitely tricky but I was stoked to find that one.” 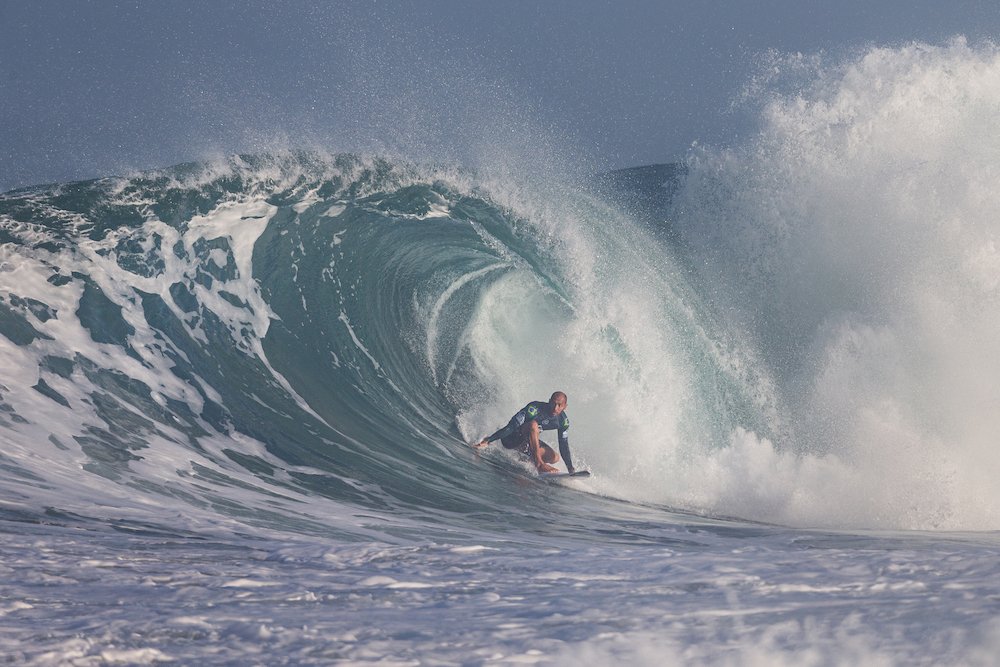 HOSSEGOR, FRANCE – OCTOBER 5: Jadson Andre of Brazil is eliminated from the 2019 Quiksilver Pro France with an equal 33rd finish after placing third in Heat 1 of Round 2 at La Graviere on October 5, 2019 in Hossegor, France. (Photo by Laurent Masurel/WSL via Getty Images)

Conner Coffin (USA) pulled a miracle make on a late-entry backhand barrel to post his own 9.10 in the final men’s Elimination Round heat. The Californian lost control of his fins at takeoff, sliding dangerously down the face of the wave but somehow managed to get a line, build speed inside the tube and exit with the spit down the line.

“I’ve had a few great heats this season that I ended up losing and it’s nice to have that one go my way,” said Coffin. “I broke my magic board just paddling out for my heat and I thought wow here comes another shocker, but luckily I got that 9. There are so many waves out there but it’s tough to be in position.”

The first major upset of the event happened in the opening women’s Elimination Round heat when 7X World Champion Stephanie Gilmore (AUS) was eliminated by Nikki Van Dijk (AUS) and Paige Hareb (NZL). The Australian had not lost before the Quarterfinals all season and this result in the Roxy Pro France could unfortunately count her out of the World Title race for 2019.

“That was my first heat in solid La Graviere and it was a little nerve-wracking sort of new territory,” said Gilmore. “It’s nice to see the girls being pushed in these new areas, we have to perform in all sorts of conditions, unfortunately I couldn’t do that today. It was a tough heat, I got smashed a few times, broke my board and cut my hand. It’s definitely a bad result for me and you can’t win world titles with those.”

Tatiana Weston-Webb (BRA) took out the second Elimination Round and advanced alongside Silvana Lima (BRA), dispatching Bronte Macaulay (AUS) in equal 17th place in an event she reached the Semifinals last season.

Competition has been called off tomorrow, Sunday, October 6, and the next call will be on Monday, October 7. Event organizers will assess the conditions and decide the day’s competition schedule.