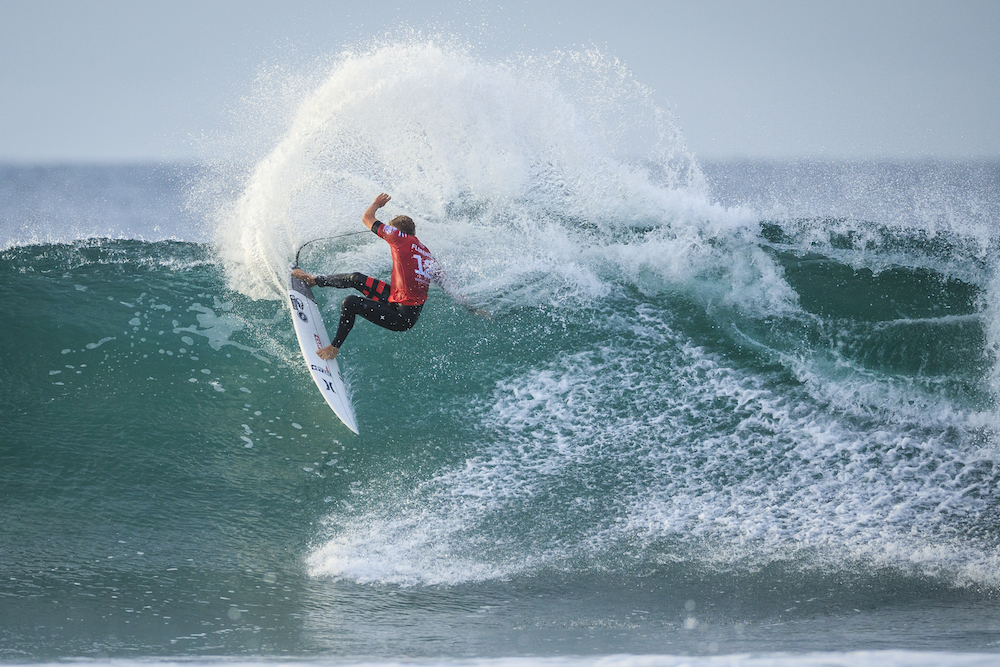 VICTORIA, AUSTRALIA – APRIL 22: 2X World Champion John John Florence of Hawaii advances directly to Round 3 of the 2019 Rip Curl Pro Bells Beach after winning Heat 11 of Round 1 at Bells Beach on April 22, 2019 in Victoria, Australia.  (Photo by Matt Dunbar/WSL via Getty Images)

After three-consecutive off days, the Rip Curl Pro Bells Beach continued today with a highly anticipated swell at Winkipop, the event’s backup site. Stop No. 2 on the 2019 World Surf League (WSL) Championship Tour (CT) completed the remaining three heats of men’s Round 1, women’s Round 1, and men’s and women’s Elimination Round 2 in four-to-five foot (1.2 – 1.5 metre) waves.

After causing big upsets as a wildcard on the Gold Coast, Aussie youngster Reef Heazlewood caught the attention of event organizers and was an obvious choice to replace Sebastian Zeitz (HAW), who pulled out of the event for the upcoming birth of his first child. Heazlewood once again made the most of his opportunity, putting on a dynamic performance to take down 2019 CT Rookie Mikey Wright (AUS) and Jesse Mendes (BRA). Heazlewood looked comfortable on the big stage, accruing a two-wave combination of 12.67 (out of a possible 20) to progress. His and Wright’s results eliminated Mendes, who leaves in Equal 33rd place.

“I was actually at home running an event with some groms when the news came through that I’d have a spot in the event,” Heazlewood said. “I rushed to get ready and head to the airport, then my flight got canceled, but I eventually got here so I’m stoked. I have a little bit of experience here at Bells but not a heap. There is definitely a lot of room to grow and learn so I’m really happy to make it through and will hopefully keep making heats.” 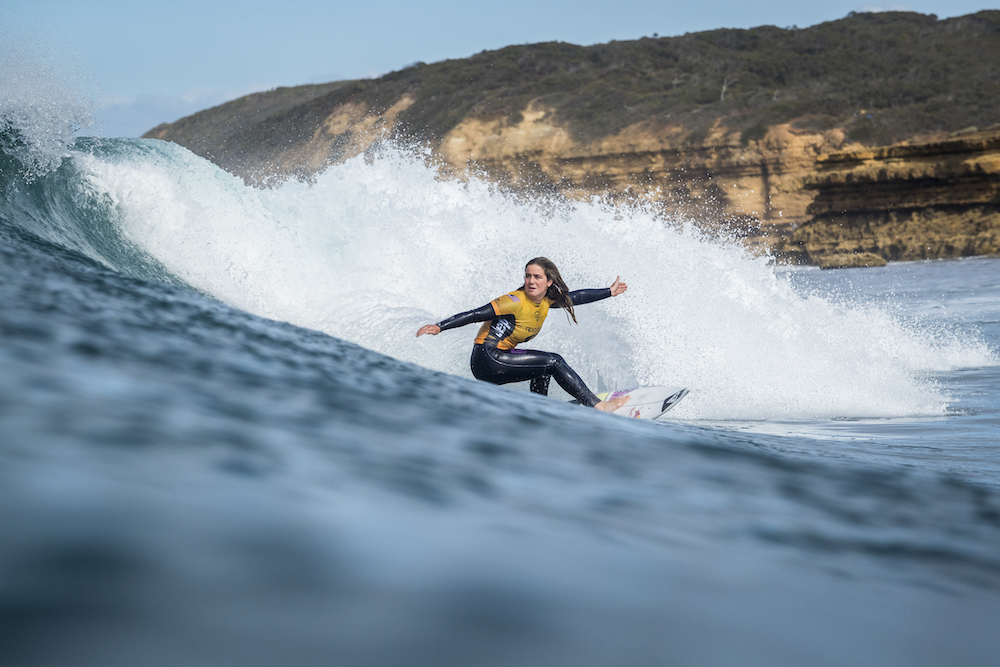 VICTORIA, AUSTRALIA – APRIL 22: Jeep Leader’ s Jersey Caroline Marks of USA advances directly to Round 3 of the 2019 Rip Curl Pro Bells Beach after placing second in Heat 4 of Round 1 at Bells Beach on April 22, 2019 in Victoria, Australia.  (Photo by Kelly Cestari/WSL via Getty Images)

Current World No. 1 Caroline Marks (USA) put on a solid display at Winkipop, smashing huge turns on her highly regarded backhand, but surprisingly, it was not enough to win her heat. 2019 CT Rookie Brisa Hennessy (CRI) posted the highest wave score of the women’s event so far, 8.33 (out of a possible 10), taking the win from Marks. Hennessy will move directly into Round 3 where she hopes to take another win and better her result of Equal 9th from Stop No. 1. Marks’ second place will also advance her to Round 3.

“That was a pretty heavy heat, so I was going into it giving it my all and I’m just glad I eventually found some good waves,” Hennessy said. “It’s so special to get underway here at Bells. It was reallycool to hear them play Hells Bells this morning and know I’d be competing. I’m just so happy to be here competing fulltime on the CT and to be competing at such a historical event.”

After a tough Round 3 loss on the Gold Coast, 2019 CT Rookie Soli Bailey (AUS) was close to another dreaded early elimination. The young Byron Bay local was determined to take his first CT heat win and overcome 2018 CT Rookie of the Year Wade Carmichael (AUS) and wildcard Xavier Huxtable (AUS) in their Round 2 matchup. Bailey dominated the heat with a combination of progressive aerial surfing and classic power turns. Bailey moves into Round 3 where he will take on an in-form Conner Coffin (USA).

“It’s all on the line when you’re surfing in those Elimination Round heats,” Bailey said. “I ended up posting a couple of good scores, which was great. After that heat, I was really excited to think about some solid waves coming later in the week but also wanted to stay in the moment and enjoy the feeling of taking a CT heat with some good scores. I’m definitely excited to see what lays ahead with the waves that are on the way.”

2019 CT Rookies Peterson Crisanto (BRA) and Deivid Silva (BRA) also progressed through the Round of 32 as they continue to search for a breakthrough result on their first year on the elite level.
Victoria’s Van Dijk Brings Heat against Peterson and Hareb

n her 10th year of competing at the Rip Curl Pro Bells Beach (four years as a wildcard), Phillip Island’s Nikki Van Dijk (AUS) hopes to ring the Bell for not only her first time but also as the first Victorian to do so since Gail Couper did in 1976. Today, Van Dijk took a step in the right direction, taking down World Title hopeful Lakey Peterson (USA) and Paige Hareb (NZL) in the opening heat of Round 1. Van Dijk will progress directly into the Round of 16 where she will take on two-time Rip Curl Pro Bells Beach winner Courtney Conlogue (USA).

“I was really trying to control that heat at the end,” Van Dijk said. “I made a bit of a mistake at the end taking an average wave, which could have left the door open for the others but it was all good in the end. Winning this opening round is so important as it gives you a good seed in Round 3, but there are no easy heats on the CT so can’t think too much like that. That keeps it exciting and I’m loving the new format. My first CT was this event years ago and the format was like this so it feels familiar which is good.”
CT Veterans Stamp Authority in Early Rounds
Seven-time WSL Champion Stephanie Gilmore (AUS) struggled with wave selection against wildcard Kobie Enright (AUS) and Bronte Macaulay (AUS). Gilmore had a slow start to the heat but eventually found her rhythm and posted two solid scores for a heat total of 15.33 (out of a possible 20), the highest combination of the event so far. Gilmore’s win puts her in the Round of 16 where she will again match-up with Enright.

“I get frustrated at Winki because I tend to pick bad waves,” Gilmore said. “I look at waves and think they won’t be good and paddle past them then the ones I choose are worse then I end up in a bad headspace. Halfway through I had to gather myself and just remember that I only need two waves and luckily I got back-to-back decent ones in a short amount of time. ”

After falling to Gilmore and Enright, Macaulay battled back in the last heat of the day, Round 2 Heat 2, to also advance to the next round. 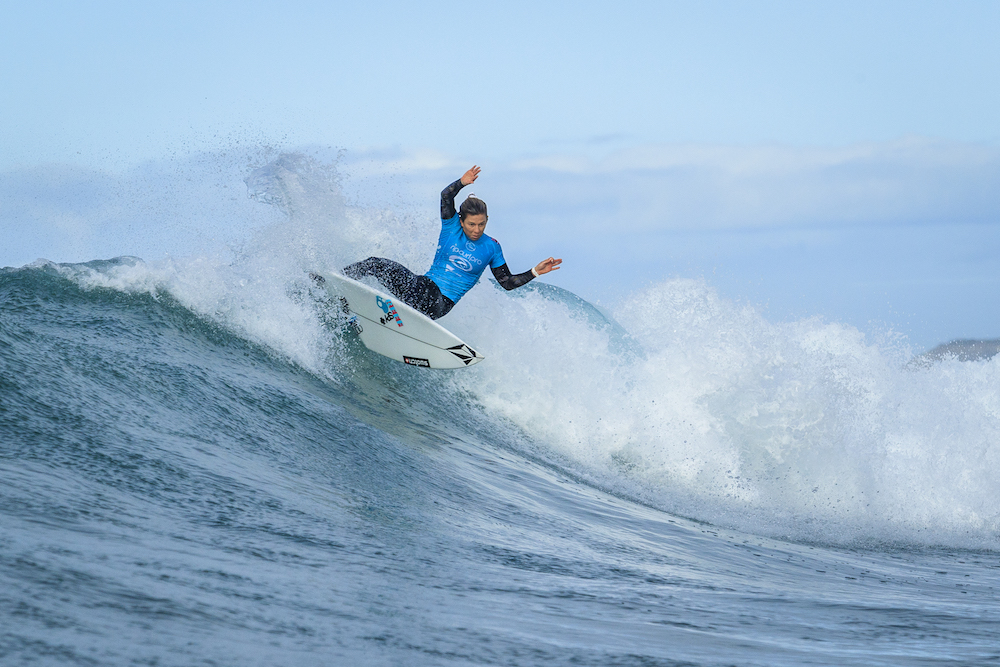 VICTORIA, AUSTRALIA – APRIL 22: Coco Ho of Hawaii advances directly to Round 3 of the 2019 Rip Curl Pro Bells Beach after winning Heat 2 of Round 1 at Bells Beach on April 22, 2019 in Victoria, Australia.  (Photo by Kelly Cestari/WSL via Getty Images)

Coco Ho (HAW) shined in her opening heat at Winkipop with a commanding win over three-time WSL Champion Carissa Moore (HAW) and former Rookie of the Year Keely Andrew (AUS). Ho and Moore will both skip to Round 3 (Round of 16), while Andrew was eliminated from the event.

Owen Wright Advances After Hold at Winki
Owen Wright (AUS) took a vital win in his Elimination Round over Jack Freestone (AUS) and Trials winner Harrison Mann (AUS). Despite Wright and Freestone advancing, the heat saw no shortage of excitement with a heat pause after something was spotted in the lineup, which turned out to be a large plume of seaweed.