Win a Nixon Mission Watch worth £389

Built smart and built tough, the NIXON Mission SS is the worlds first action sport smart watch. It can withstand the elements so you can take it with you anywhere: in the water, on the hill, off road and beyond.

Powered by Android Wear™ and working hand in hand with Surfline the Mission is equipped with a preloaded app and streamlines real-time surf and snow shred alerts to your wrist, so you’ll never-not-know. Welcome to the next generation of smartwatch. Welcome The Mission.

It is £389 and we have one to giveaway, all you have to do it is enter the comp by entering your details below. Good luck!

Nixon is proud to announce that William Aliotti is the newest addition to the Nixon Pro Team. In what has become a long-standing tradition, the 23-year-old freesurfer’s promotion to the Pro ranks was unanimously rubberstamped by the rest of Nixon rider.

“Wow, I couldn’t be happier right now!” said the Saint Martin native. “Nixon has had my back for years, and to get the nod from all these guys whom I have looked up to for so long is a big honour for me. I can’t wait to spend even more time with the crew on the hunt for waves.”

2016 WSL European Champion Jonathan Gonzalez was clearly also delighted with the group decision to welcome William into the fold, saying: “William is a great surfer, and totally deserves to be on the Pro Team. It’s great news for him obviously, but also just as good for the team too – young surfers like William keep things fresh, and every team needs that.”

Always up for an adventure to lesser-known surf spots around the world, William has continued to cement his reputation as one of Europe’s best aerial specialists and most dynamic freesurfers, most recently exploring the likes of Scotland, Ireland, and Cape Verde. Marlon Lipke says: “What I really admire about William is that he made a name for himself during a challenging period for surfing as a whole. He showed everyone he’s a fighter and will do anything to live this freesurfer lifestyle we all love” Aliotti’s arrival in the Pro Team caps an already stellar year for Aliotti following his victory at the Arica Pro Tour in Chile in the summer. Versatile as you like, he’s repeatedly proven he can turn it on when it matters most, as he did in 2014 when he won the Nixon Surf Challenge in Kamchatka, Russia.

No stranger to hammering out banger video parts and jaw-dropping magazine covers, Aliotti’s surfing has evolved enormously since the early days of warm-water Caribbean waves. These days, he’s equally at home in big wave conditions, while still remaining the envy of many peers for his aerial prowess. Nixon veteran Gony Zubizarreta commented: “William was a quiet kid when I first met him, just doing crazy airs the whole time. He’s definitely found his voice since then, and is now tucking into huge, deep barrels all over the world. And of course he’s still flying high, too!”

Franck Corbery, Marketing Director at Nixon Europe, added: “Sometimes decisions are made easy, and this is definitely a case in point – William has been killing it for a good while now. He’s always been a great fit for Nixon, not just in terms of his incredible versatility in the water, but also for his easy-going character out of it. It’s good to have you onboard, William!”

An evolution in time and technology

An evolution in time and technology, Nixon’s Ultratide is the product of extensive research and development and an exclusive partnership with Surfline that taps the power of Ultratide directly into the Surfline network. Ultratide features wireless Bluetooth® technology, to provide you with real time data; tide, wave height, swell direction, wind direction and speed, water and air temperatures, GeoLocating the closest break so you’ll never not know. Full details on everything the Ultratide does here 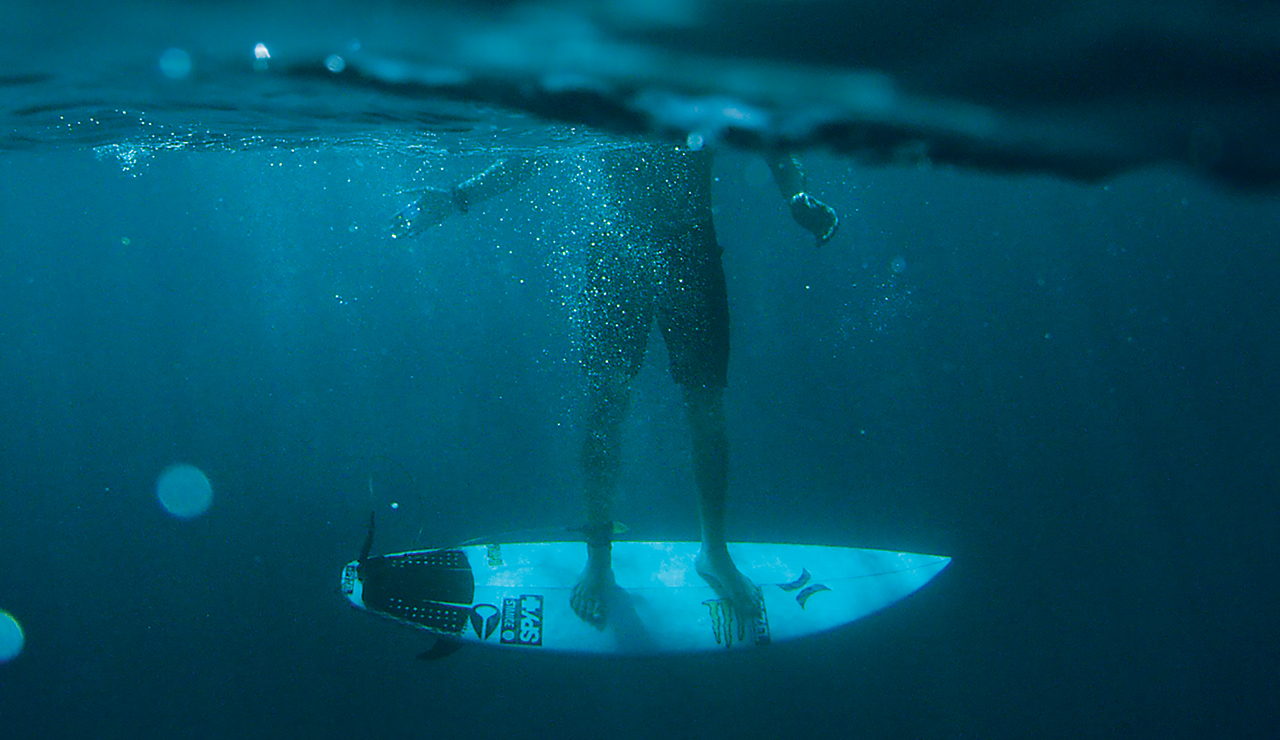 Continuing to honor the spirit of doing the never been done, Nixon introduces the fourth release in its STAR WARS™ | Nixon series, The Force Awakens Collection: Part 1. The new range of thoughtfully designed watches and accessories is inspired by Episode VII: The Force Awakens and draws inspiration from the ominous presence of Kylo Ren and Captain Phasma. The Kylo Ren collection will be available July 4, 2016 at retail locations globally and online at Nixon.com. The Captain Phasma collection will drop as part of a second delivery on September 5, 2016.

As part of this latest collection, Nixon will also launch two limited edition watch models inspired by Darth Vader and Chewbacca. The limited edition Darth Vader Sentry Leather will be available exclusively at Nixon.com and Chewbacca Sentry Leather watches is available exclusively at Comic-Con inside the Lucas Film pavilion (Booth 2913-D). Both limited watches will release on July 20, 2016. 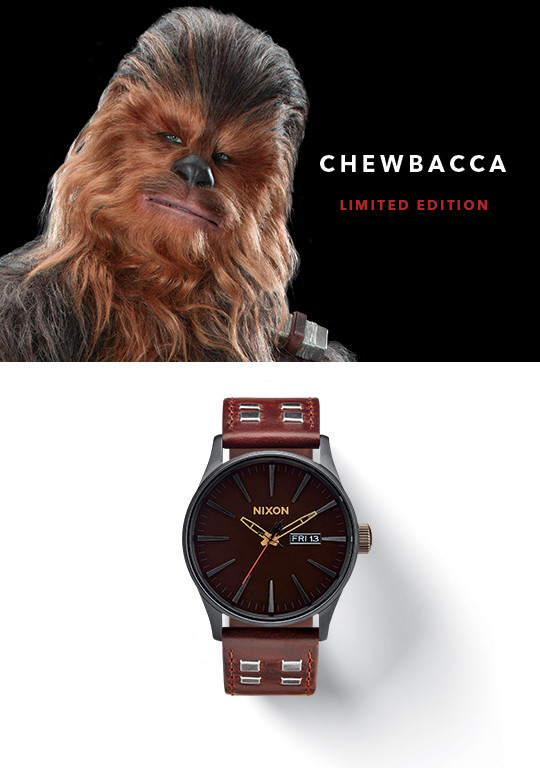 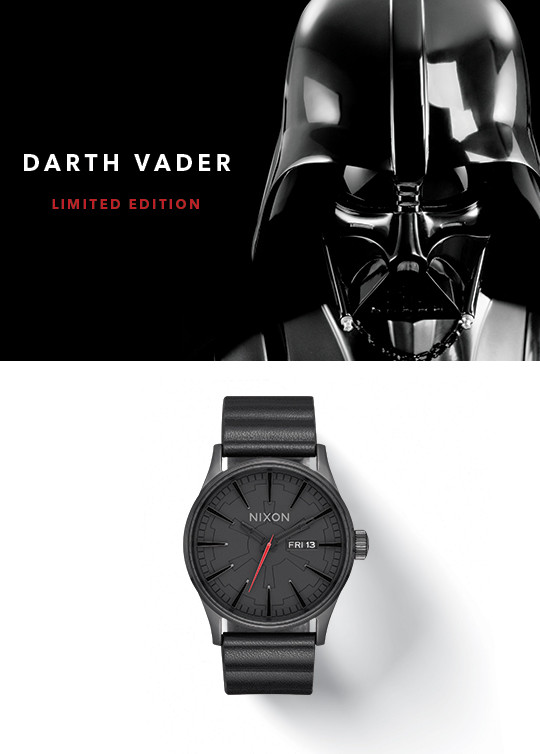 Nixon have partnered with surf forecaster Surfline to bring us the newest revolution in wearable tech The Ultratide; a tide watch which includes real time surf forecast. Yup surf forecasting on your wrist. 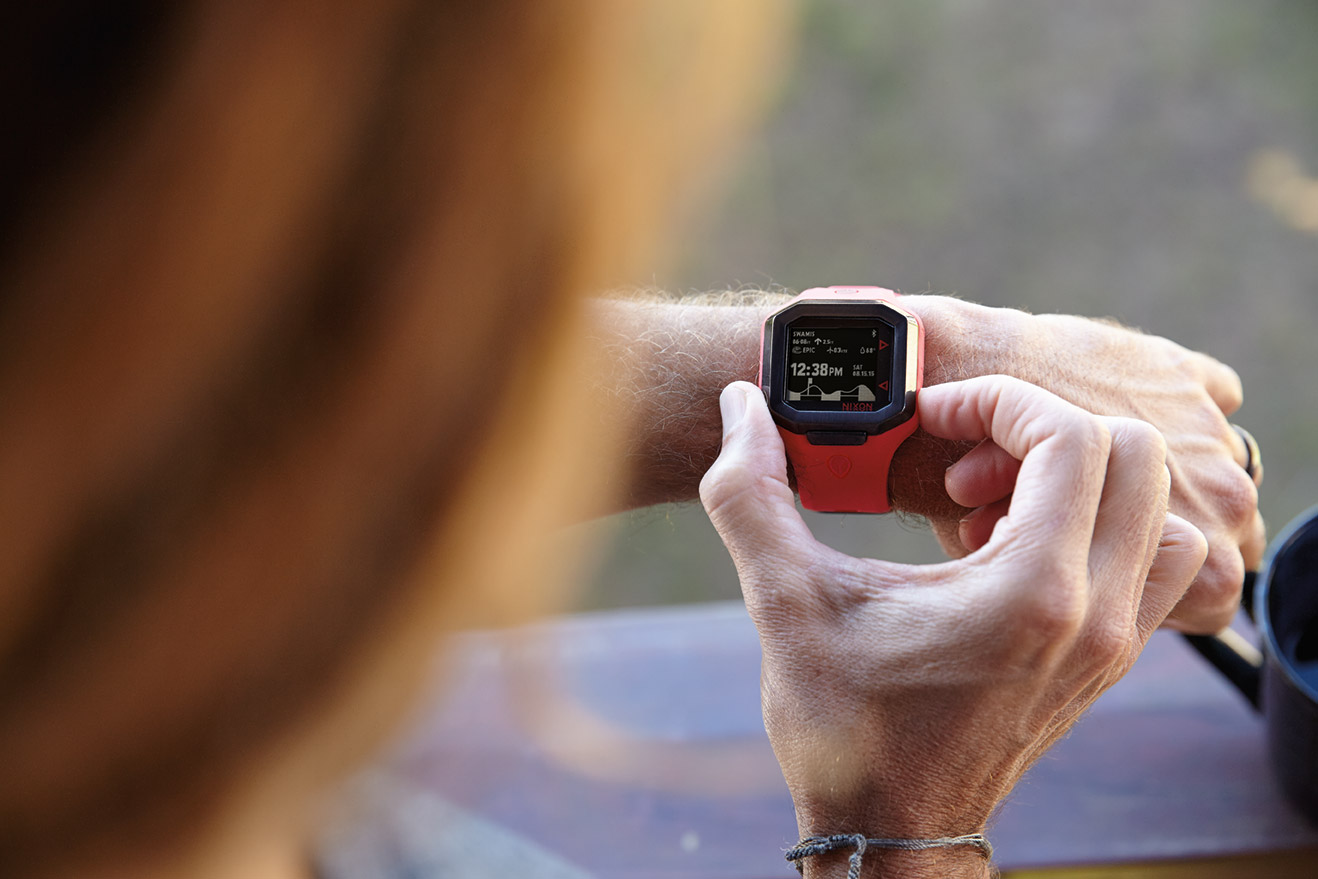 The Ultratide delivers real-time conditions for your favourite breaks via Bluetooth® technology. Tide, wave height, swell direction, wind direction and speed, water and air temperatures; all the data you need, so you’ll never not know when to go. It is as they say, the World’s smartest surf watch. 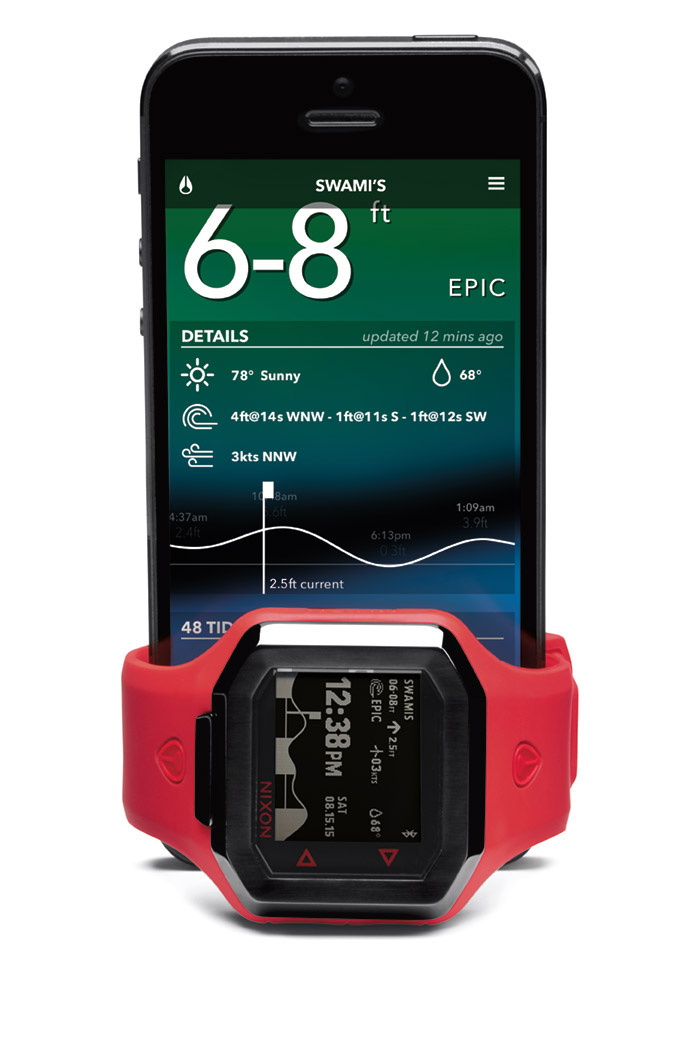 The watch auto geolocates to show you the conditions for the nearest surf spot to your current location, and stays continuously updated with current Surfline forecast data for your favourite surf spots around the world. You can choose from the thousands of surf spots in the Surfline network, and get 10 Surfline forecast data points displayed in easy to read format directly on the watch. You can also create custom surf alerts, and there is a one touch set up that synchs watch and iPhone. The Surfline Forecast data points include: current Surfline rating, current surf height, current swell height(s), forecasted swell height(s), current swell direction(s), forecasted swell direction(s), current water temperature, current air temperature, current sky condition, and 48hrs of tide data with predicted time and height details in both imperial and metric values.

So no more hitting refresh, all you got to do is look at your wrist. Pretty remarkable… 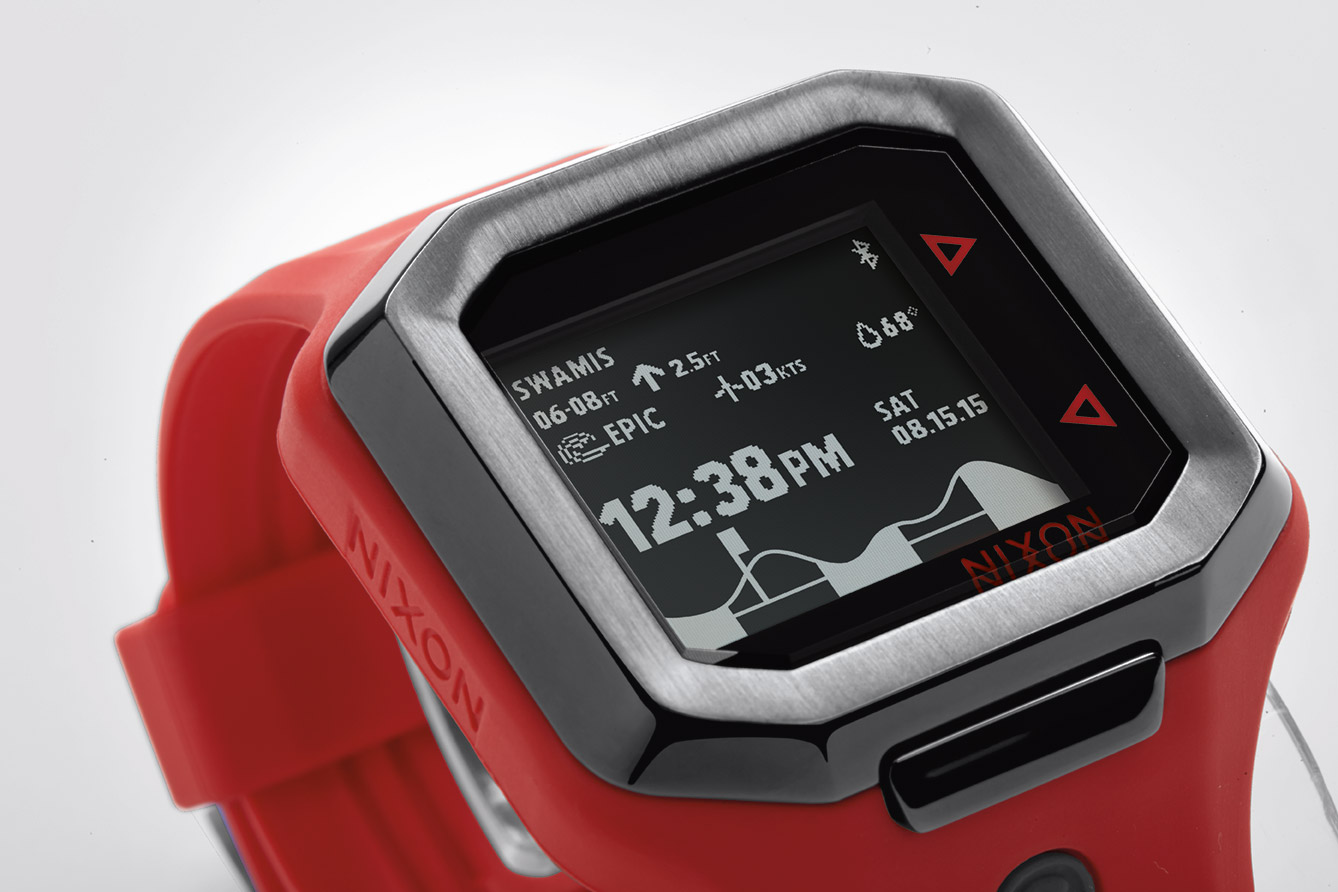